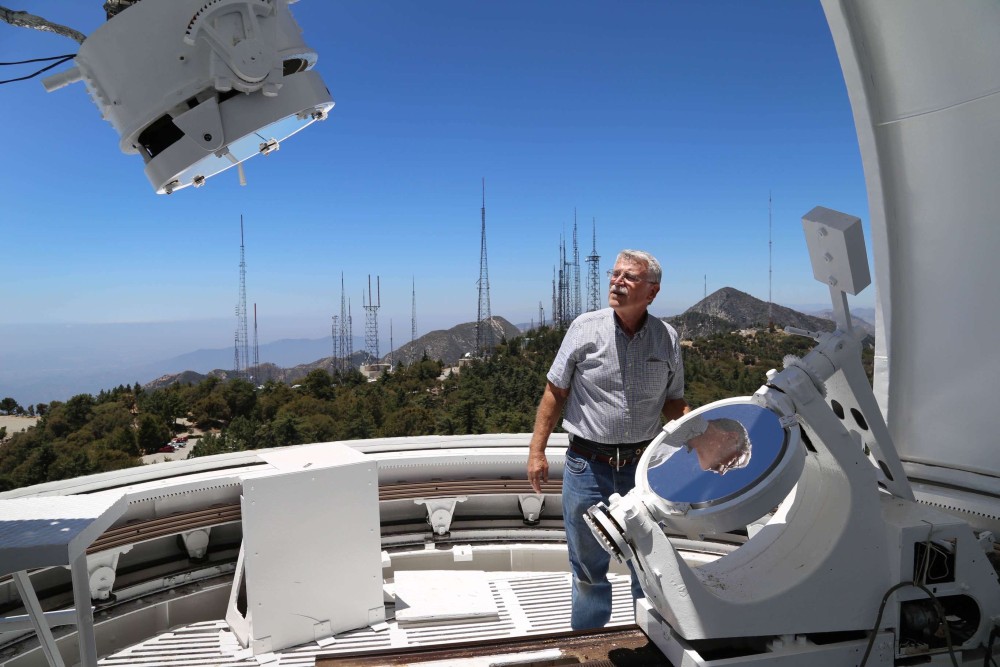 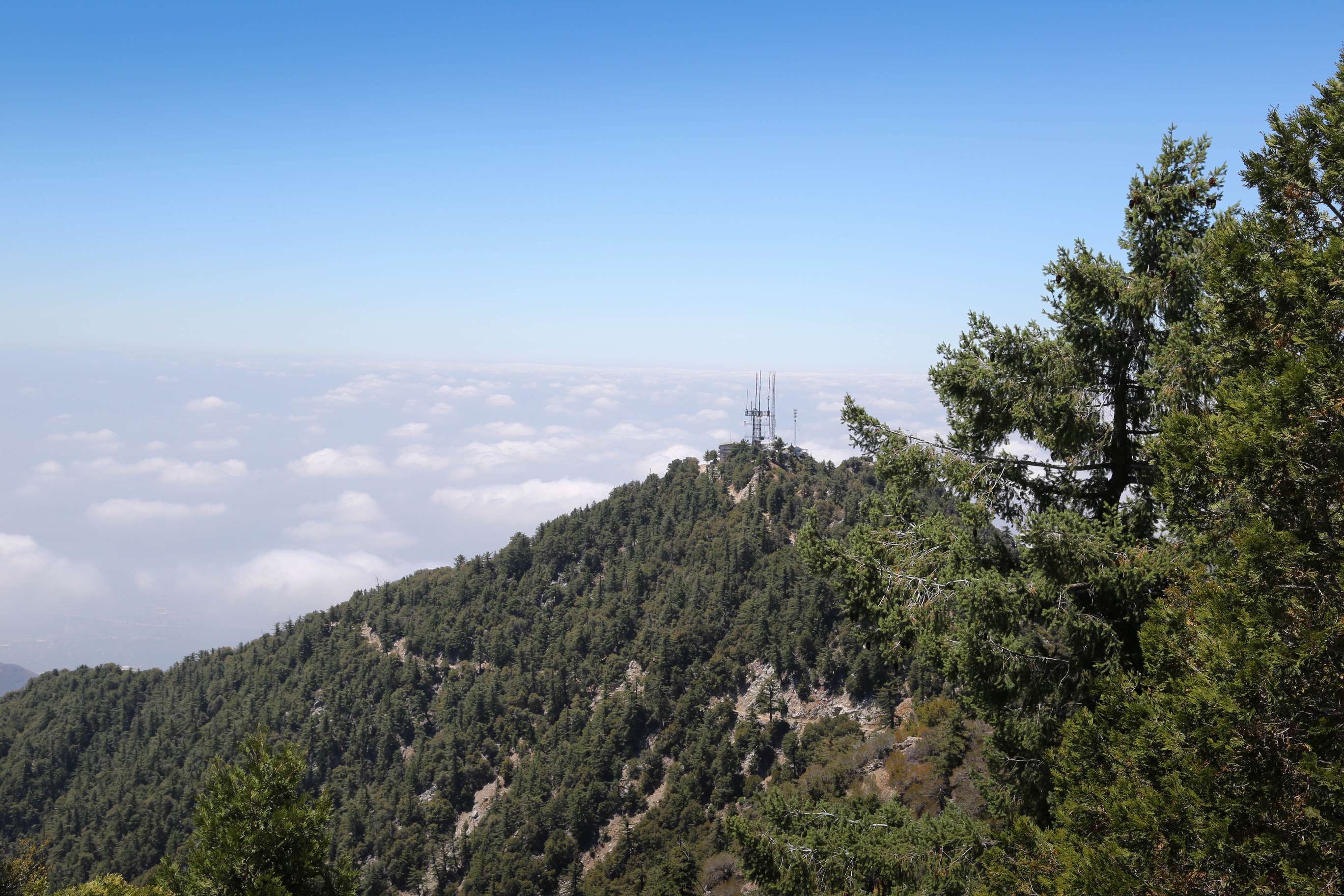 The San Garbriel Valley, and Los Angeles beyond, are obscured by a morning blanket of clouds below Mt. Wilson.

Los Angeles may be home to Hollywood stars but for an out-of-this-world experience drive up to the Mt. Wilson Observatory where you can find even more beautiful stars to gaze at, any time of the day or night. 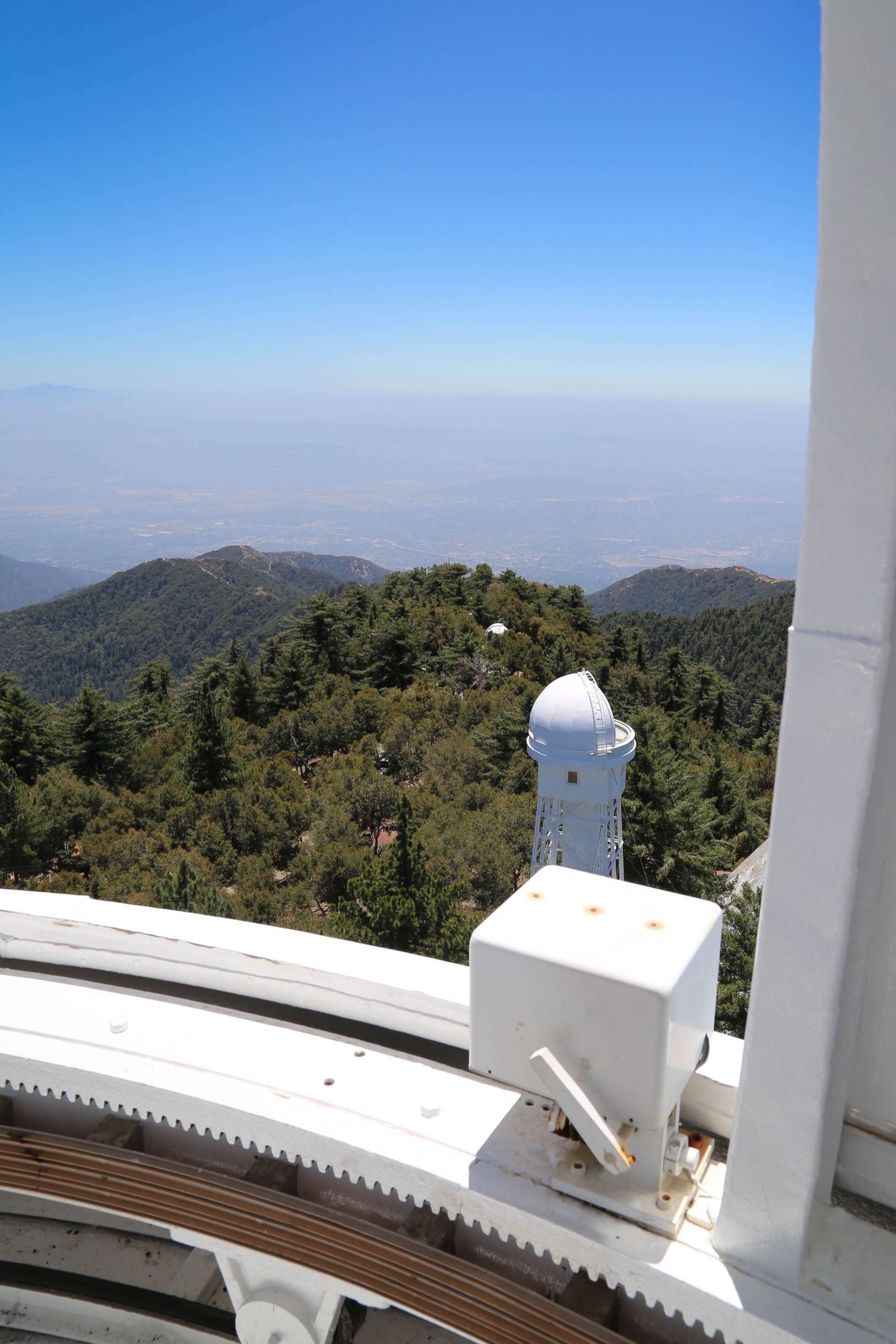 The Mt. Wilson Observatory, located north of Pasadena, is renowned as one of the most famous astronomical observatories in the world and groundbreaking work continues there to this day. 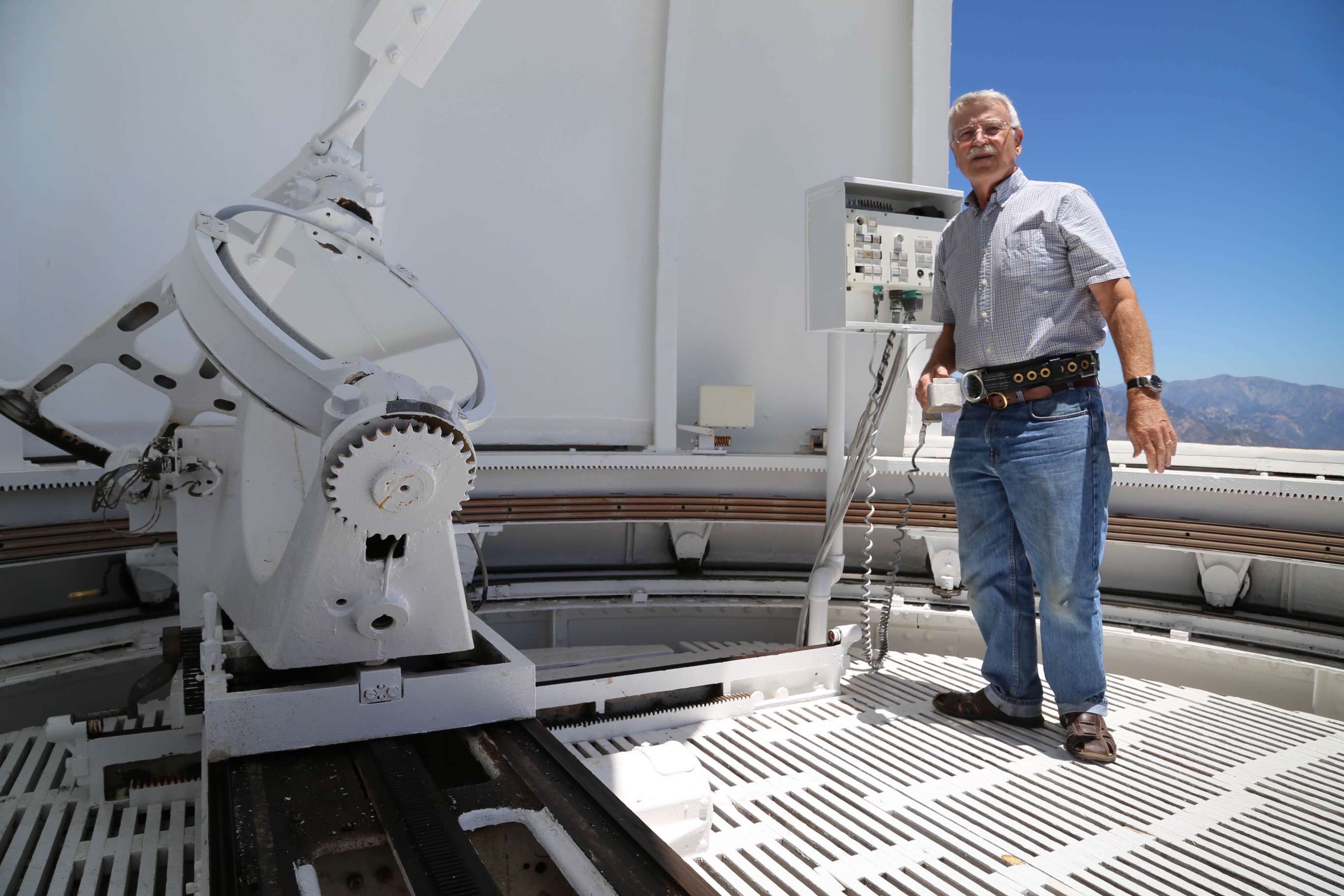 John Boyden checks to ensure the angle of the mirror is properly aimed. 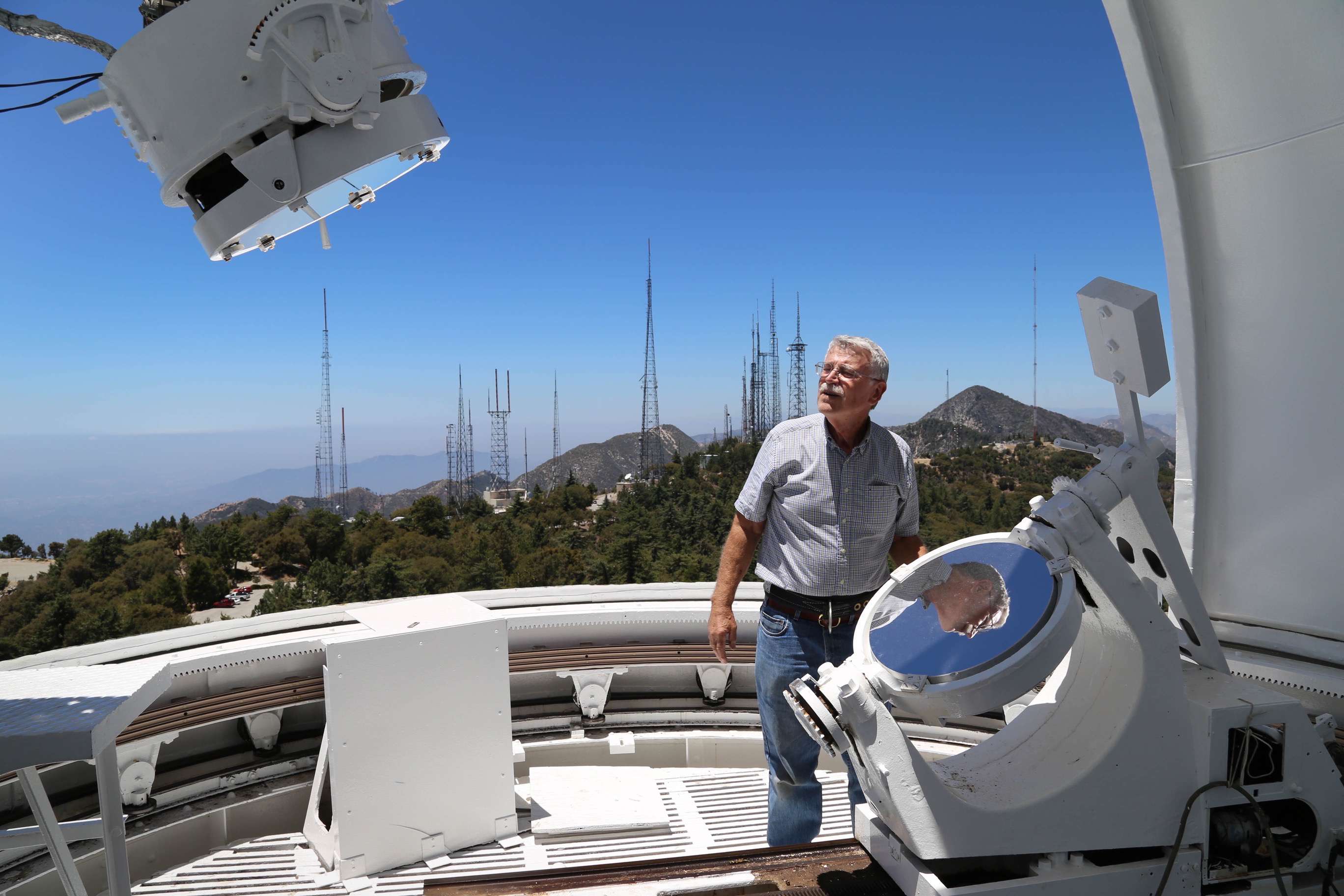 The bottom mirror reflects light to the top mirror, which directs it to the research station down below.

George Ellery Hale, the driving force behind the observatory’s creation, persuaded steel magnate Andrew Carnegie to fund critical elements of the observatory. As at Mt. Wilson, Carnegie, in his later life, became one of America’s great philanthropists, building a university, a research institute and thousands of libraries across the country. 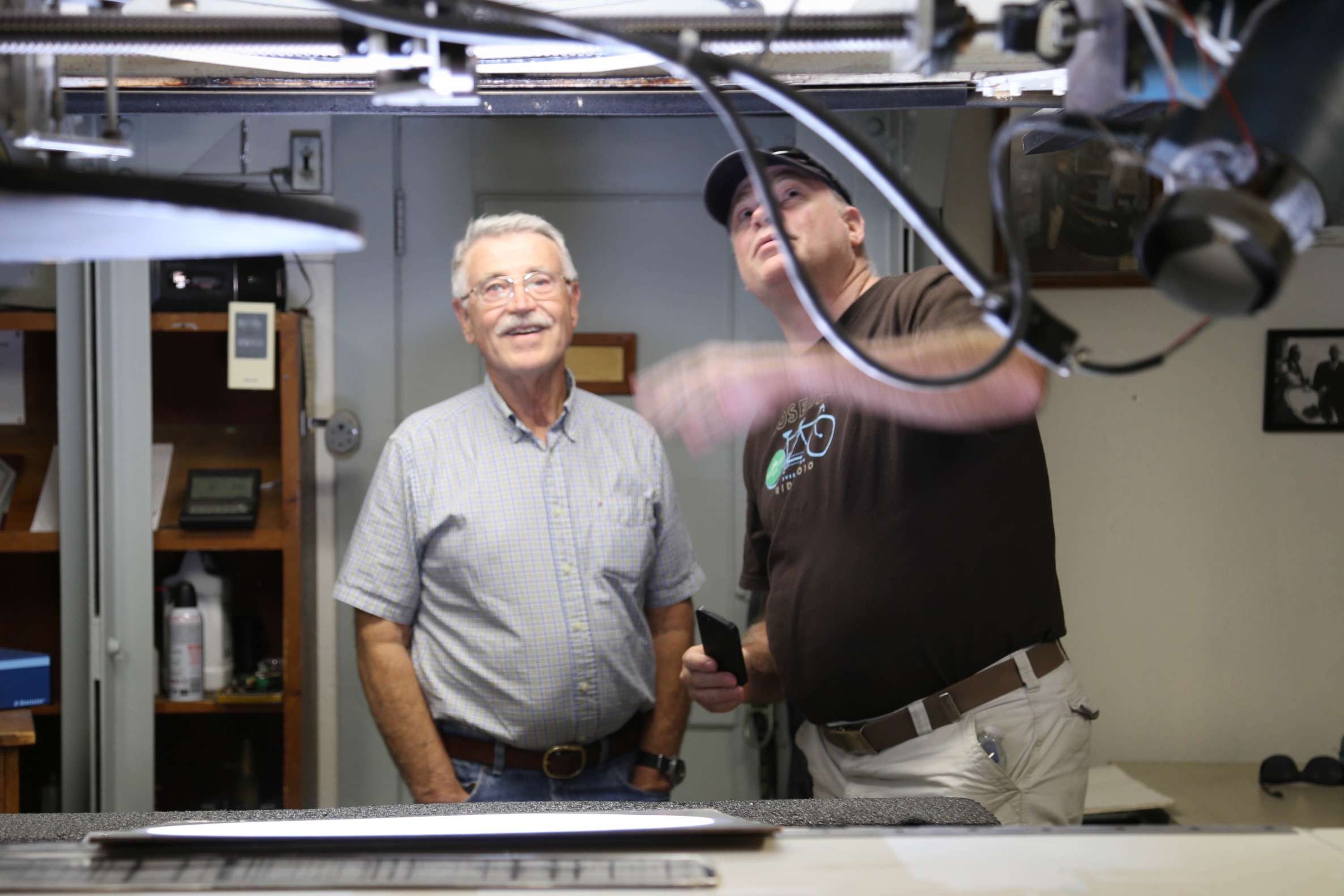 Science and astronomy fascinate people of all ages. Here a visitors gets a better understanding of of a solar observatory operates from John Boyden, left.

Hales’ persuasive vision and Carnegie’s vast wealth resulted in the building of the observatory’s 60 and 100-inch reflecting telescopes. The 100-inch, known as the Hooker telescope, was the instrument that enabled Edwin Hubble to determine in 1929 that the universe was expanding, based on his now-famous “red shift” theory.

For decades, the Hooker telescope, with its 100-inch mirror was the world’s largest. Edwin Hubble used it to prove the universe is expanding.

For 31 years the Hooker telescope was the world’s largest, until being eclipsed by the 200-inch telescope Palomar Hale telescope in 1948, near San Diego, CA. Of course, larger telescopes are now being used and built around the world, at sizes of 25 meters (984 inches) and 39 meters (1,535 inches). 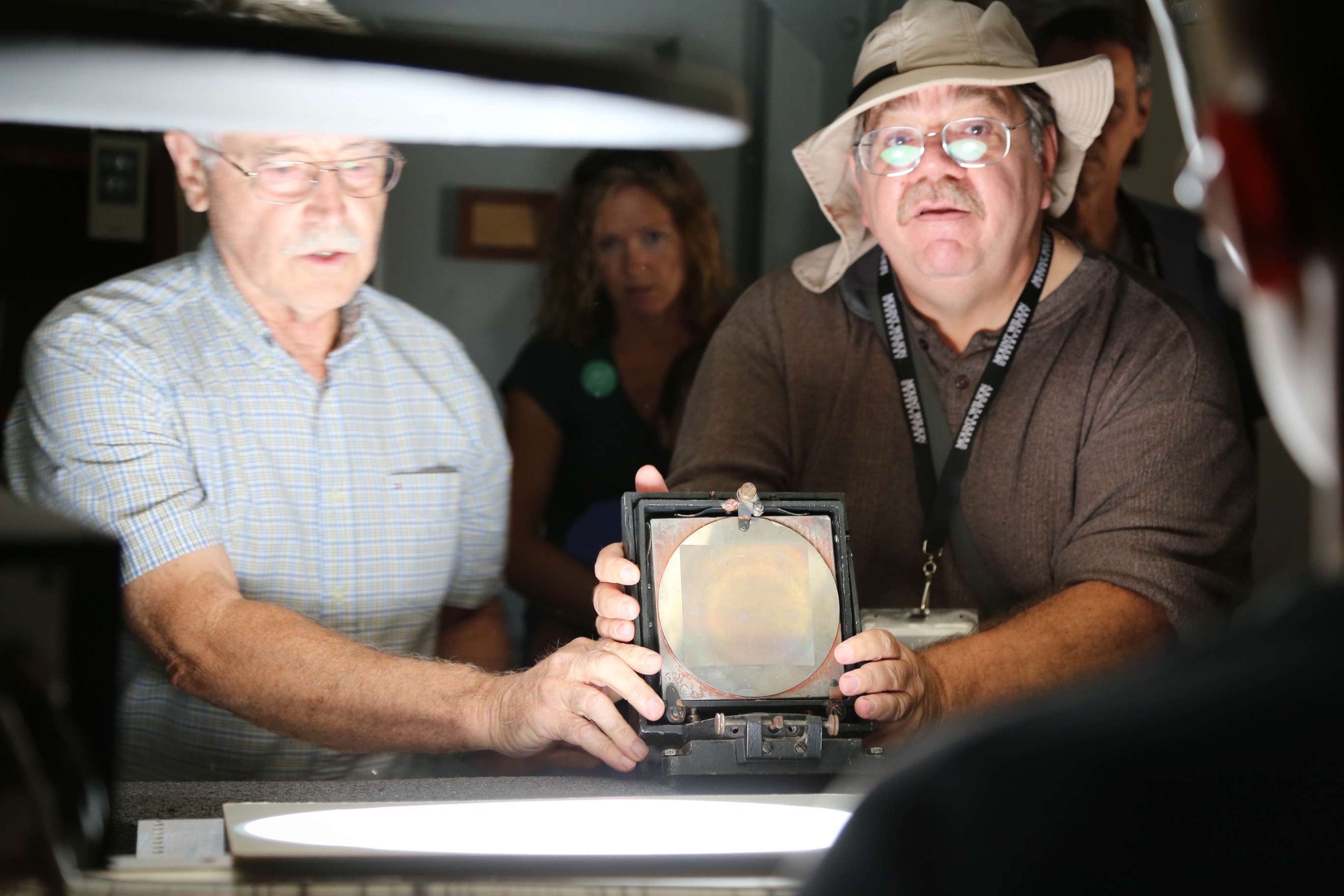 Tour guides and researchers use this prism to demonstrate how sunlight is composed of different colors, or wavelengths.

Even Albert Einstein was interested in the work at Mt. Wilson and he once toured the facility. Vintage newsreel footage and photographs show him at both the 150-foot solar observatory and the 100-inch telescope. Einstein believed that gravity bends light and wanted to know if Hale could help prove the theory. And, Hubble’s discoveries about the expanding nature of the universe, was also of great interest to Einstein. 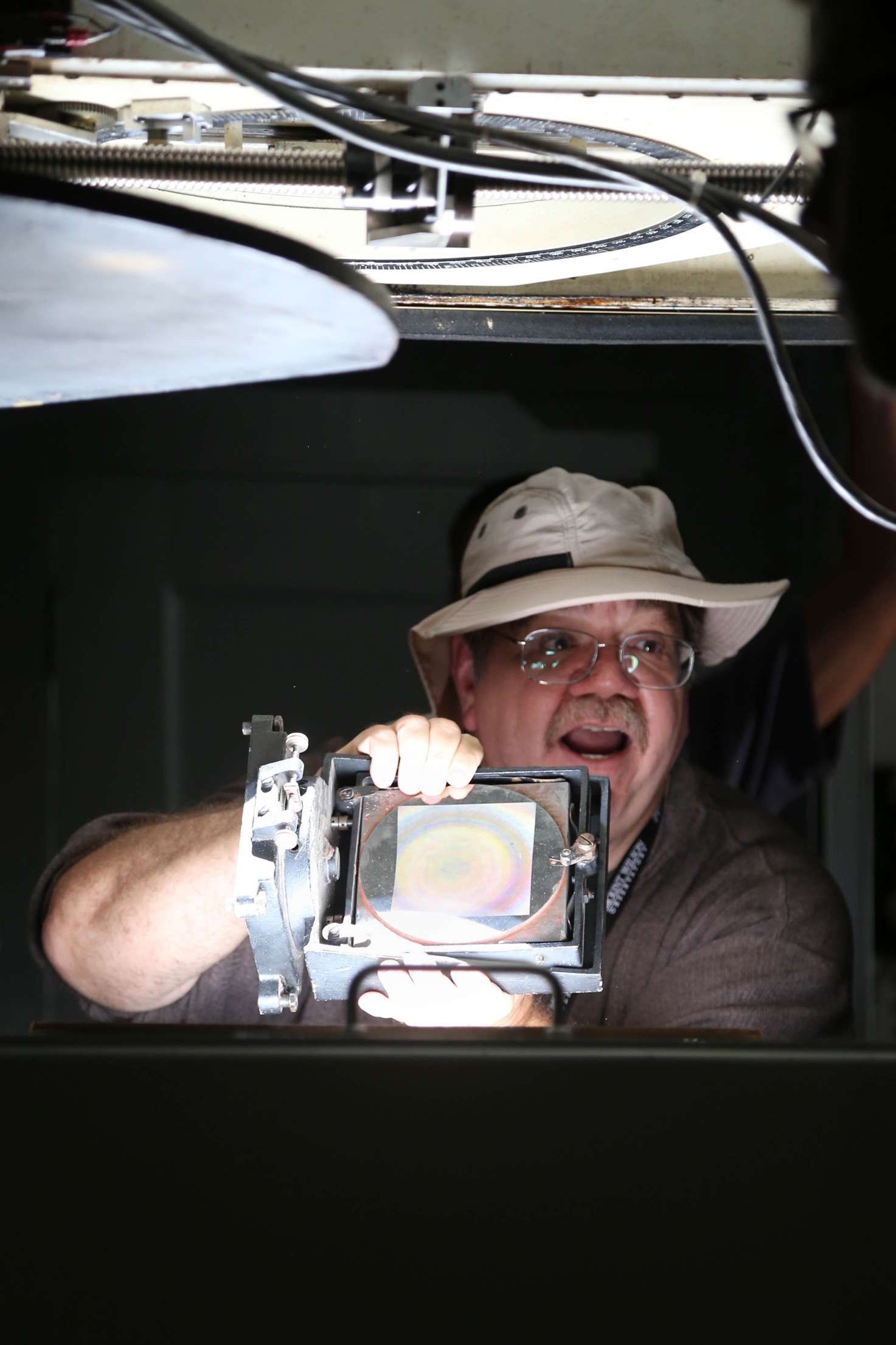 Did you know gravity bends light? Albert Einstein thought so and he once wrote George Hale to ask if he could help prove the theory.

Hale was a solar astronomer and one of the leading forces of his time in the development of astronomy in the United States. Among his many scientific accomplishments was the discovery of magnetic fields in sunspots. 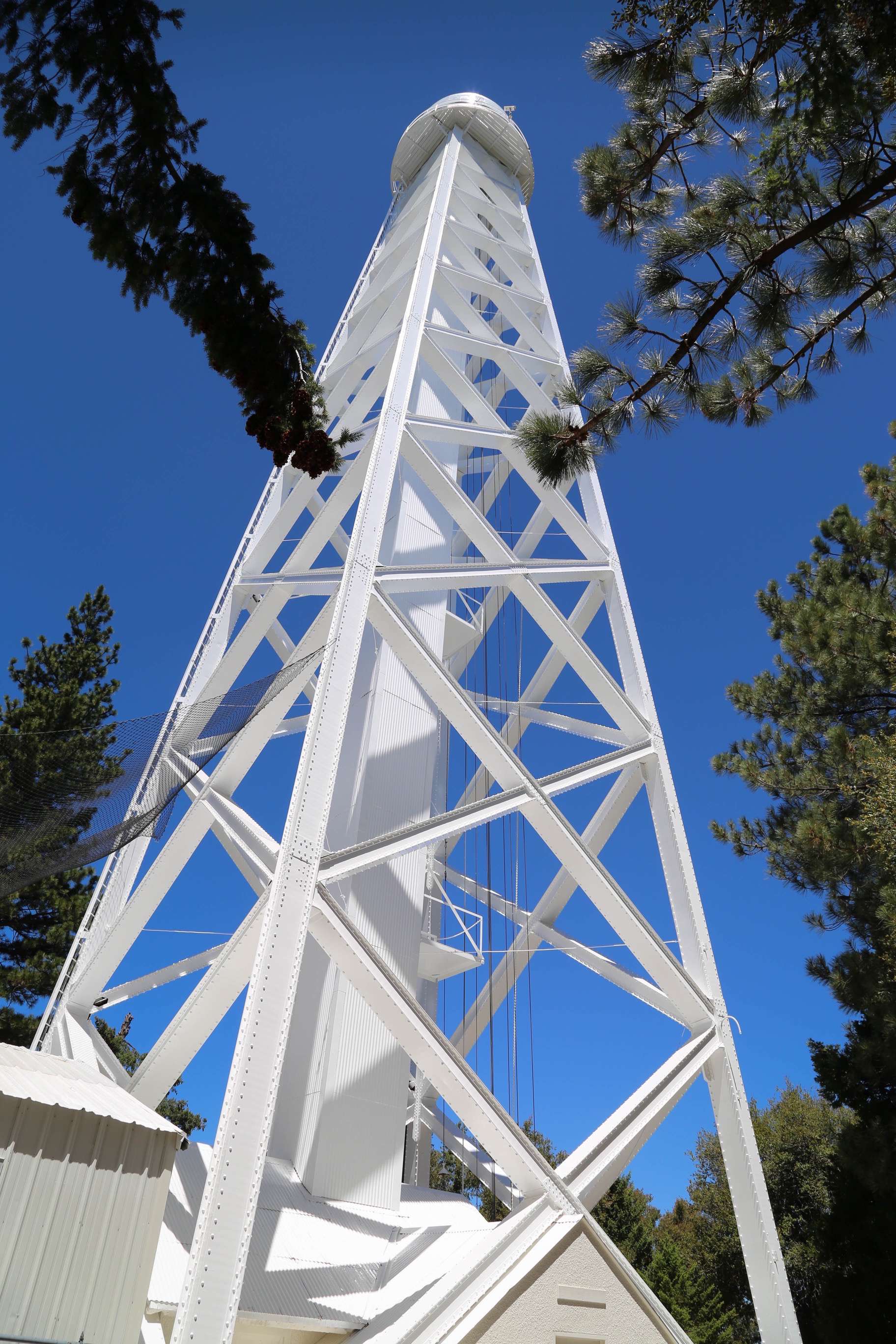 Solar observatories, like the 150-foot tower, were used by George Ellery Hale to understand that sunspots and magnetism have a relationship.

Solar and astronomical work continues at Mt. Wilson, with a number of universities and institutions conducting research. Today’s modern astronomy incorporates new technologies that go beyond solar observatories, and reflecting and refracting telescopes. Two examples, LIGO, or the Laser Interferometer Gravitational-Wave Observatory, is working to directly observe gravitational waves and the CHARA array, or The Center for High Angular Resolution Astronomy, is another important interferometer project, being carried out at Mt. Wilson. 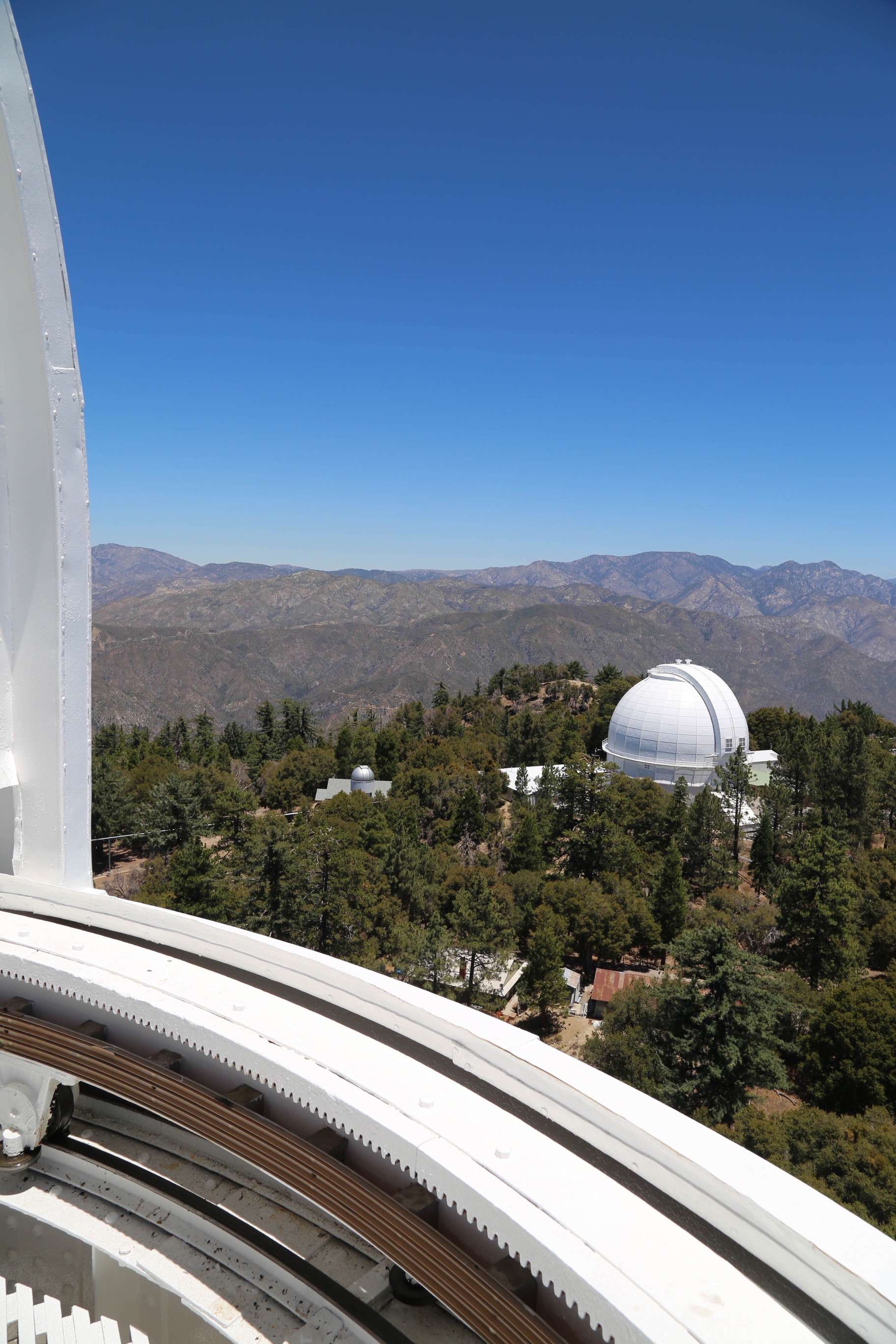 Mt. Wilson’s resources still actively search the heavens, including some of the most modern astronomical research, such as LIGO and the CHARA array.

Casual observers visiting Mt. Wilson don’t have to worry about deciphering confusing scientific jargon and theories because tour docents, many of whom worked at the observatory, are happy to simplify the highly technical aspects of astronomy that even children can understand. 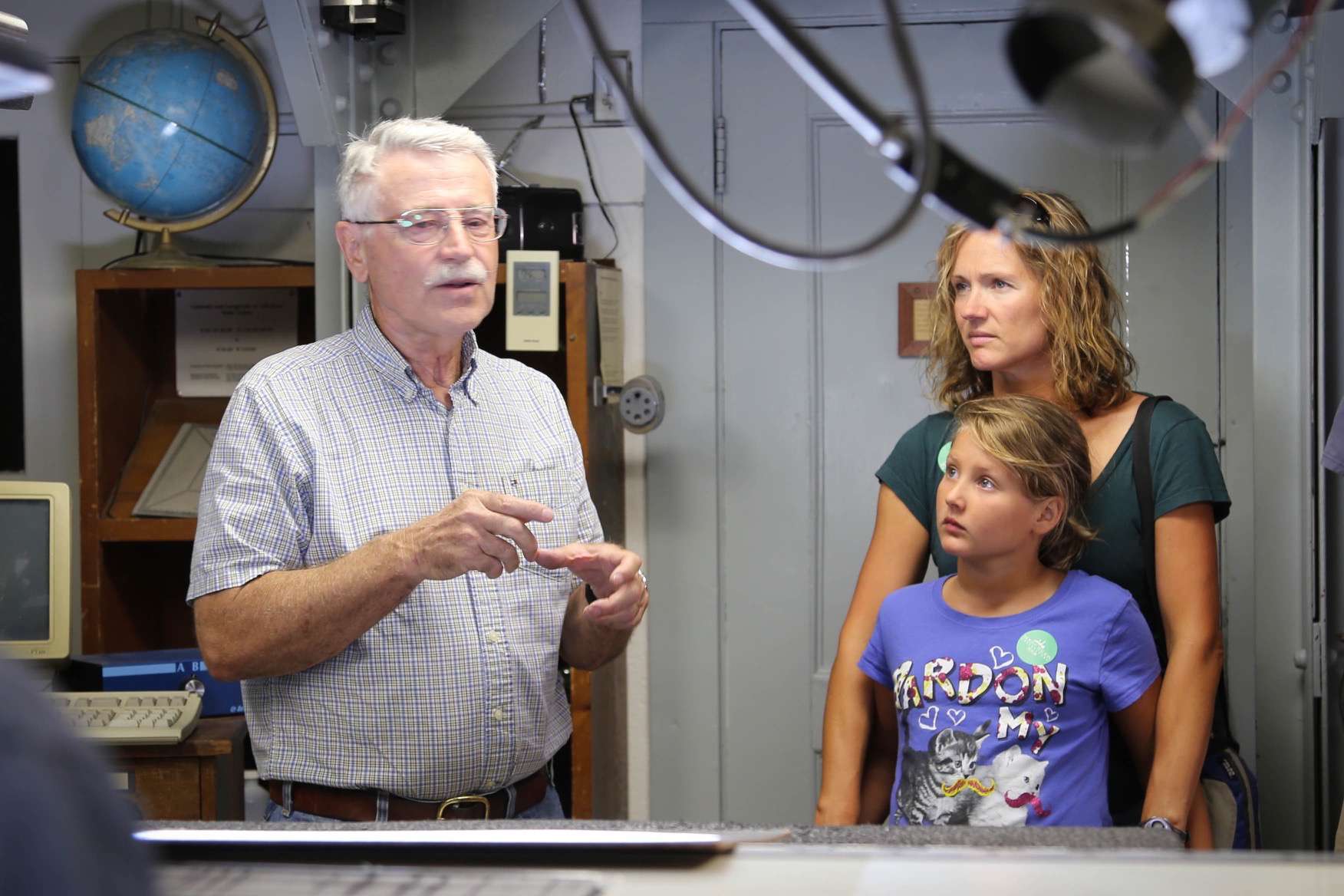 A young girl and her mother listen attentively as John Boyden explains how things work.

And while a trip to the Mt. Wilson Observatory is a lesson in science and the nature of the universe, it also helps people understand what astronomy means in our daily lives. Weekend day trips let visitors tour the 150-foot solar observatory as well as the 100-inch Hooker telescope. 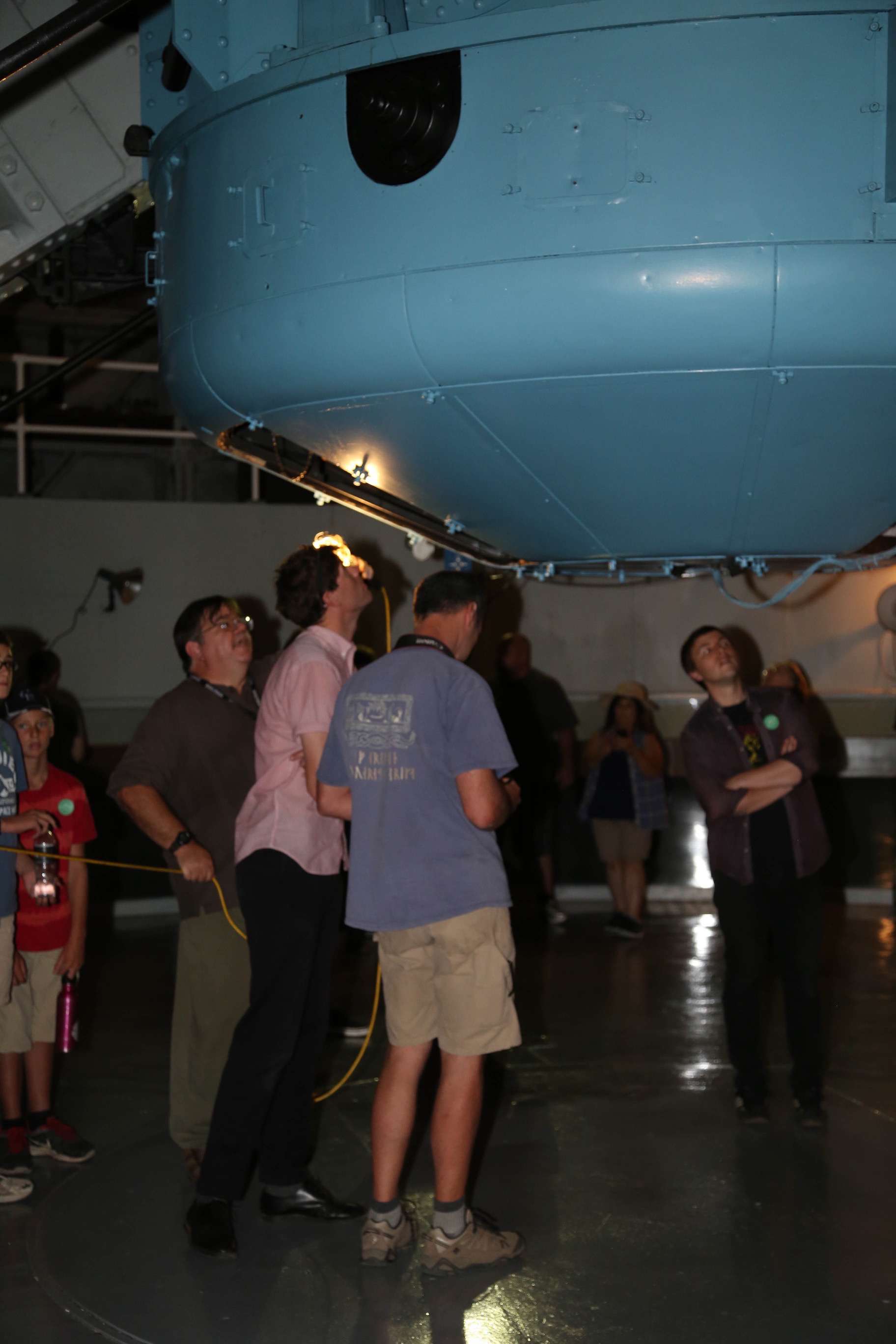 Visitors peer up to see the massive base mirror of the 100-inch telescope.

But for an even closer look at the stars, Mt. Wilson offers nighttime star parties where groups can rent the 60-inch telescope for a half-night or a full evening of stargazing. The rental includes an astronomer who will gladly direct the telescope at whatever celestial bodies observers hope want to see.

Time marches on and in a stairwell inside the 100-inch telescope are examples of communications technology, from the crank-style telephone, that was replaced by the rotary dial, then the push button phone, to today’s cellular option.

Earth is a small part of a vast cosmos that for millennia has confounded human beings. The work that has been, and continues to be done at Mt. Wilson, advances our understanding of the mysteries of the universe. And it is quite likely that careful scientific examination of the stars beyond our world will lead to important advances here on our home planet.

And who knows, one day Mt. Wilson just might be the place to answer the burning question, “Is anybody else out there?” 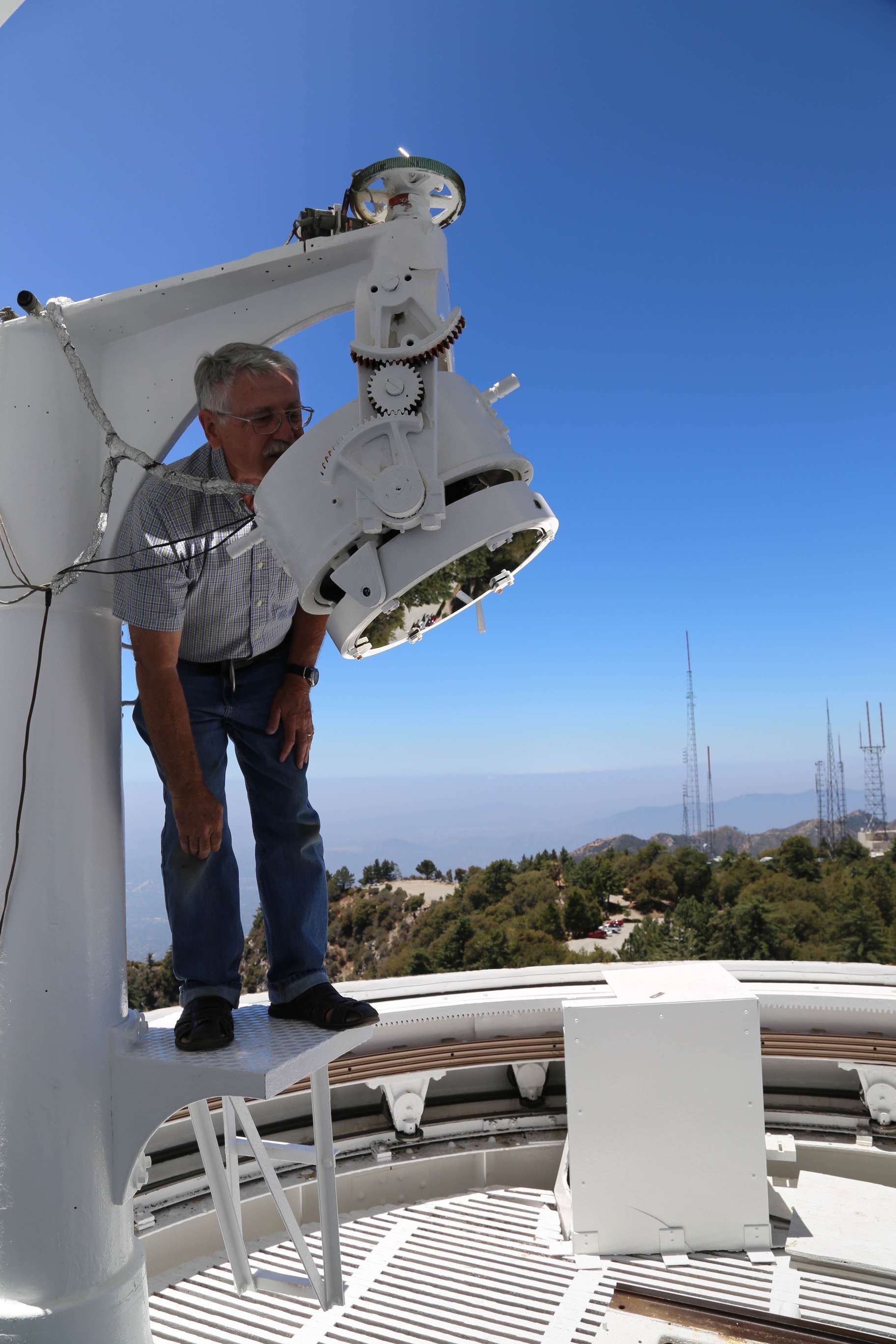 John Boyden takes a last look at the adjustment of the upper mirror on the 150-foot solar observatory.

(For more information, check out some of the links below.)