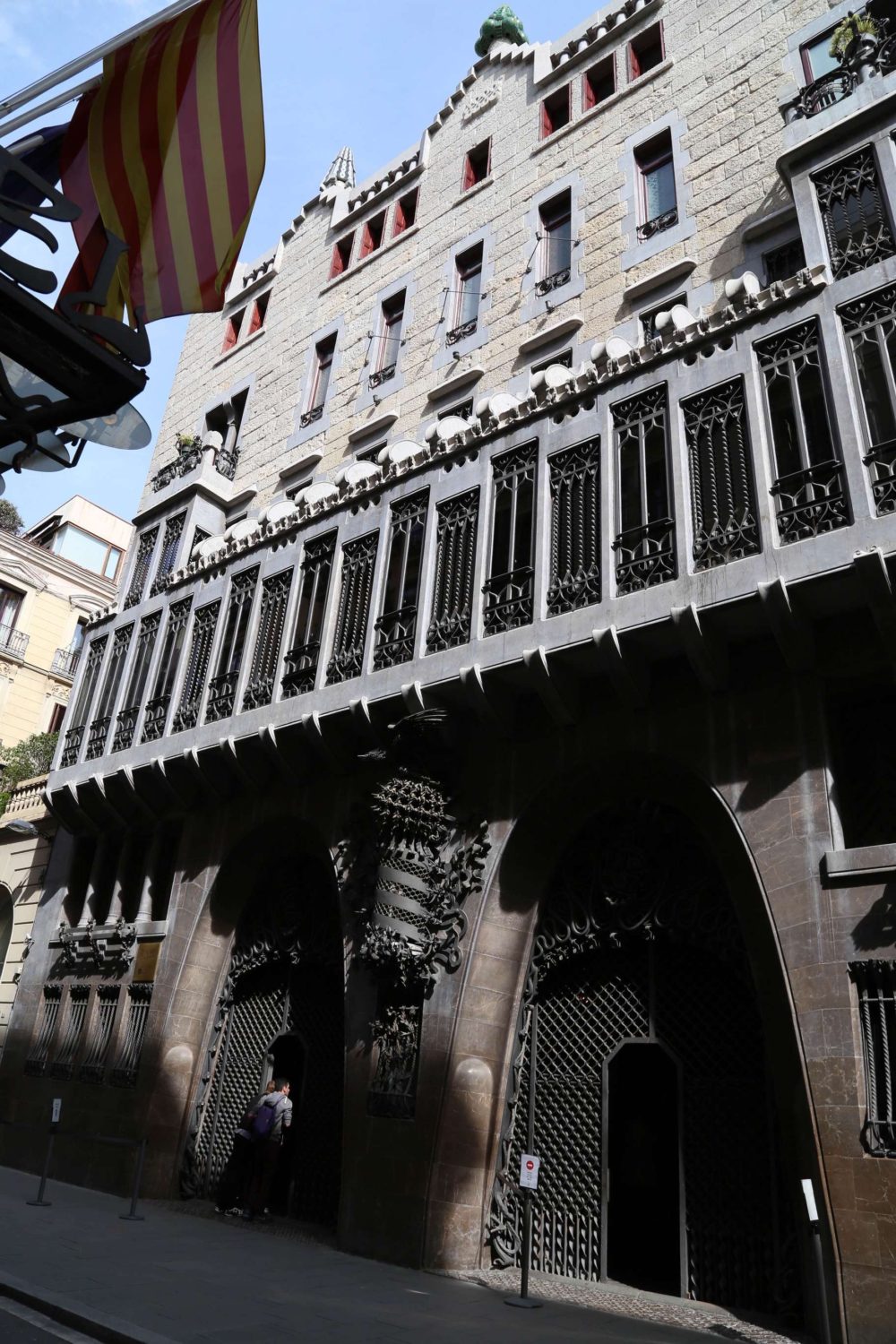 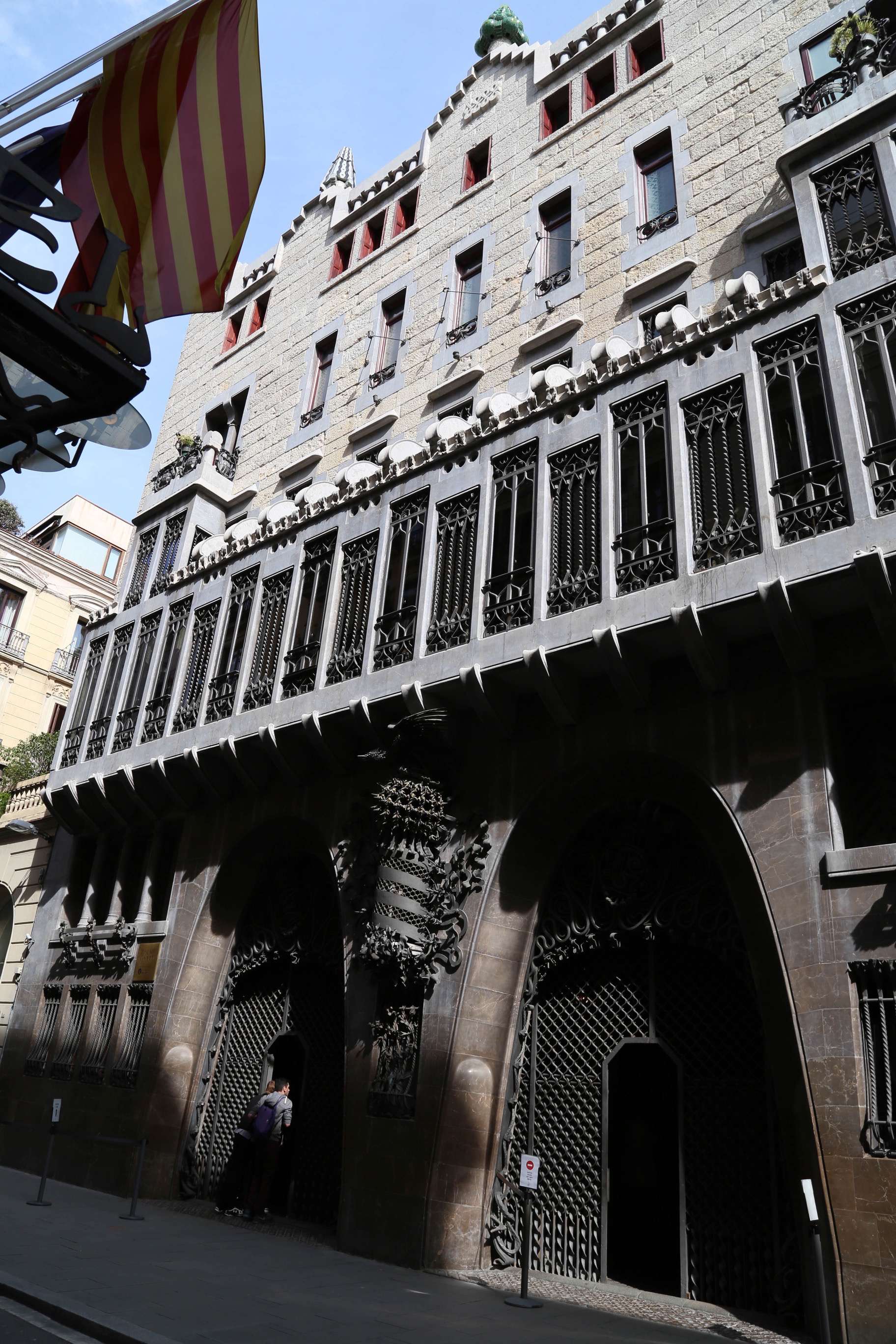 The front entry and facade of Palau Güell show an imposing edifice, but with hints of playfulness and joy. Guests walked in on the right and carriages pulled into the left bay. 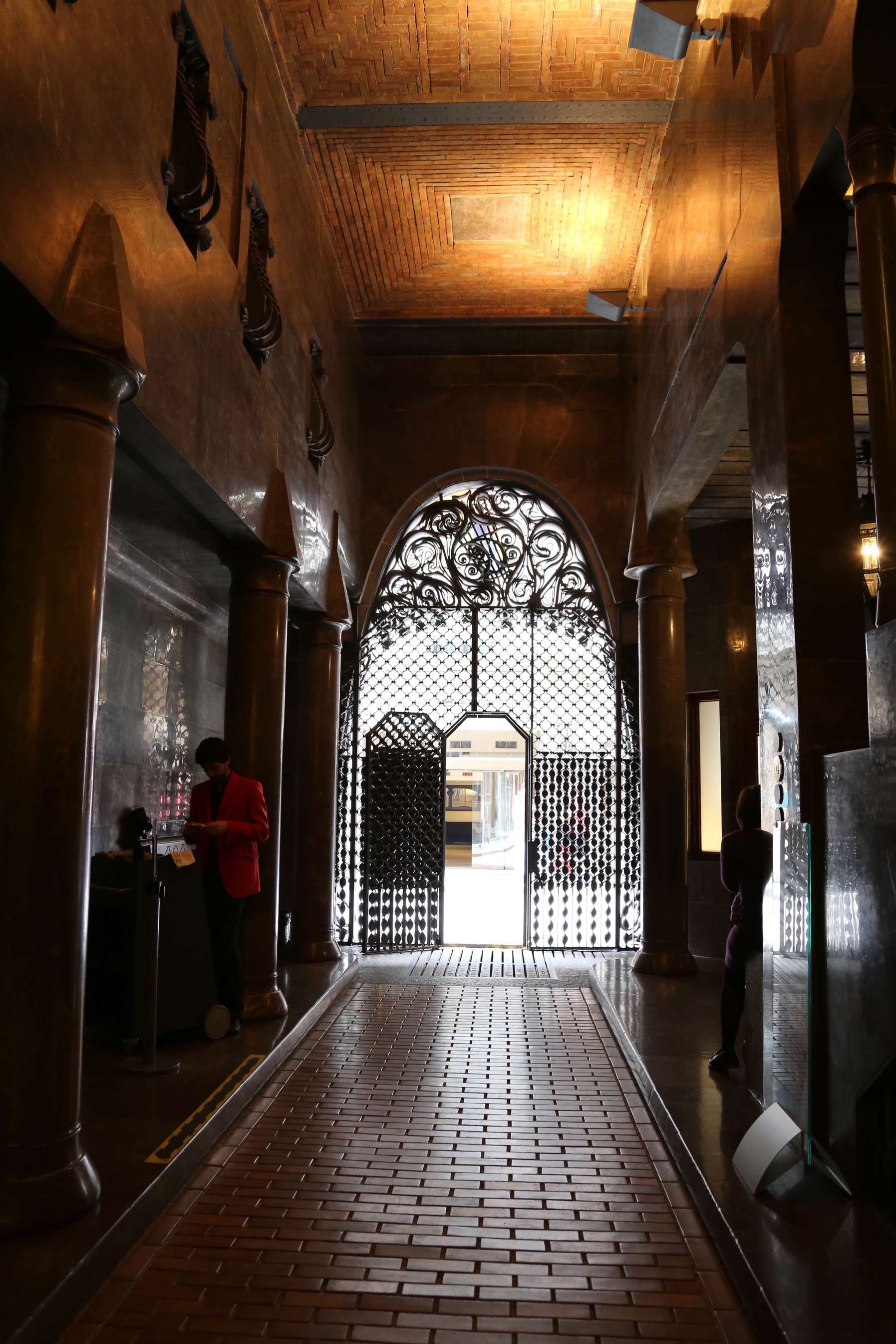 When guests to Palau Güell entered from the street, they would pass through this hallway. 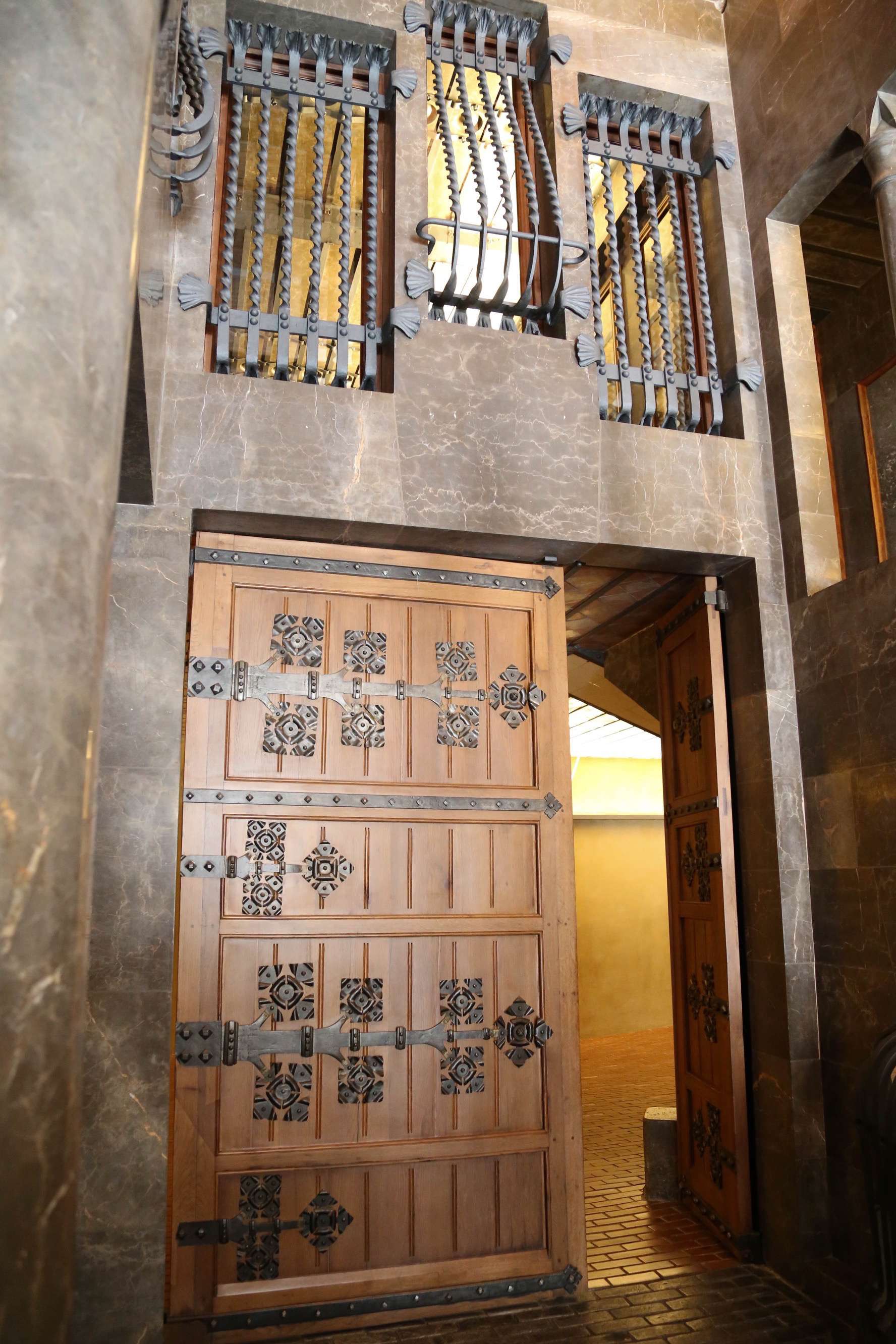 Antoni Gaudi was a humble man, yet full of immense talent. It is challenging to accept that a doorway as bold as this was envisioned by a quiet man of faith and piety. 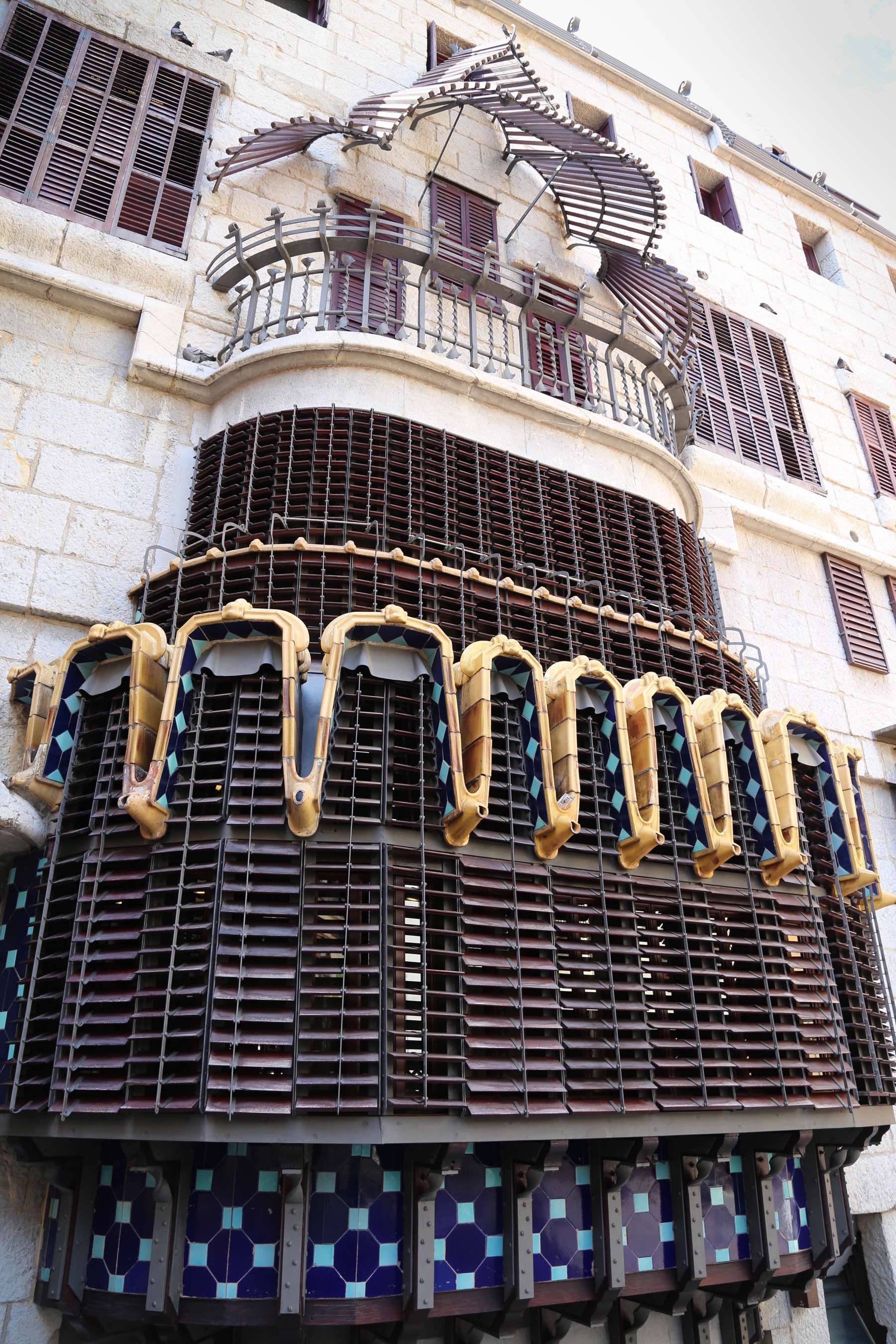 A massive bay window is hidden behind the metalwork at Palau Güell in Barcelona, Spain. Louvered slats can be adjusted to allow in more light. 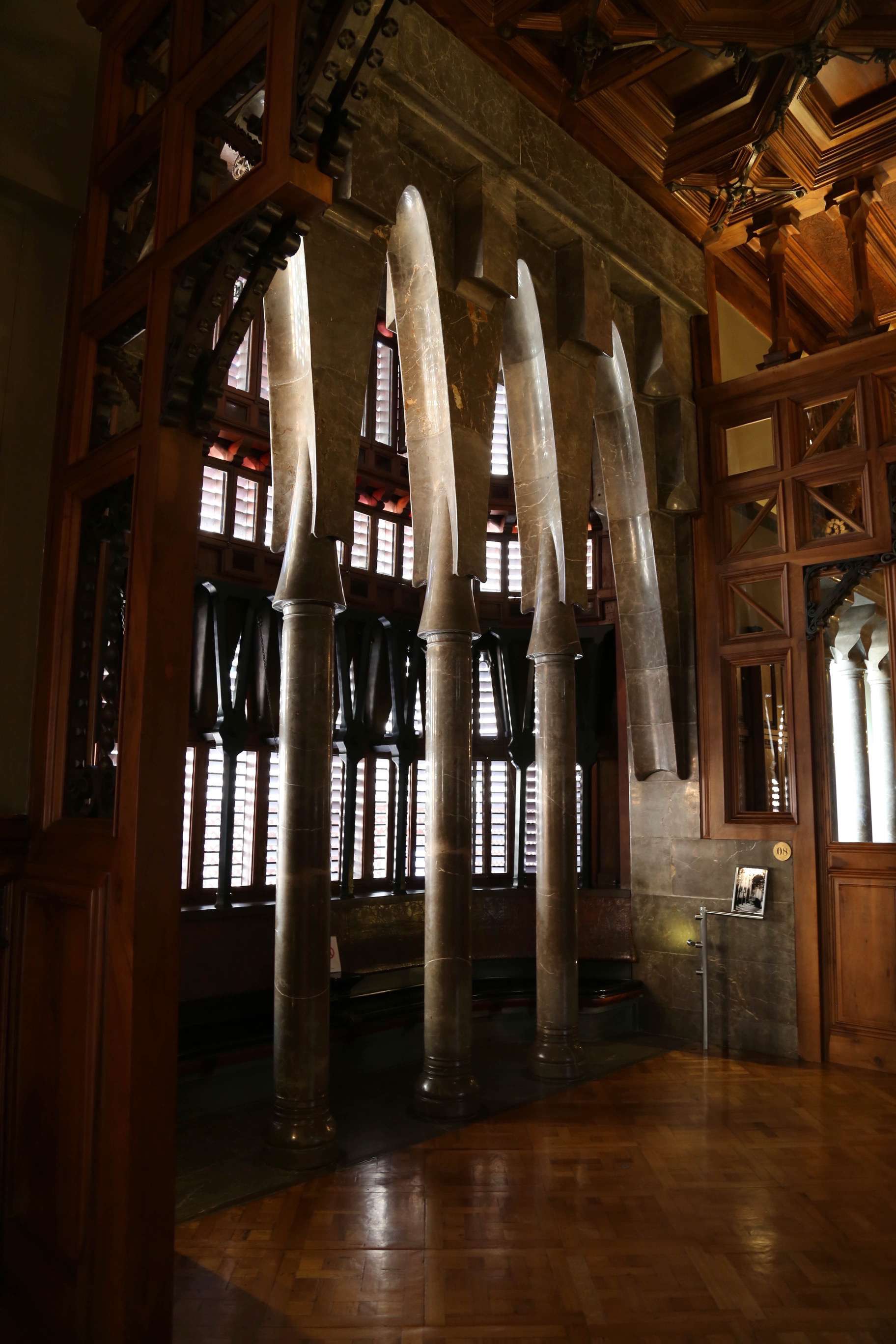 The louvered slats on the outside of the building easily controlled the amount of light that was allowed inside.

Antoni Gaudi easily ranks as one of the most brilliant architects of all time. Barcelona, Spain is home to Gaudi’s greatest works, and Palau Güell is a first-rate example of some of his early efforts. And while Palau Güell might be considered a more traditional, as compared with some of Gaudi’s later accomplishments, it is technically marvelous and strongly hints at some of the inventiveness he would demonstrate throughout his career. 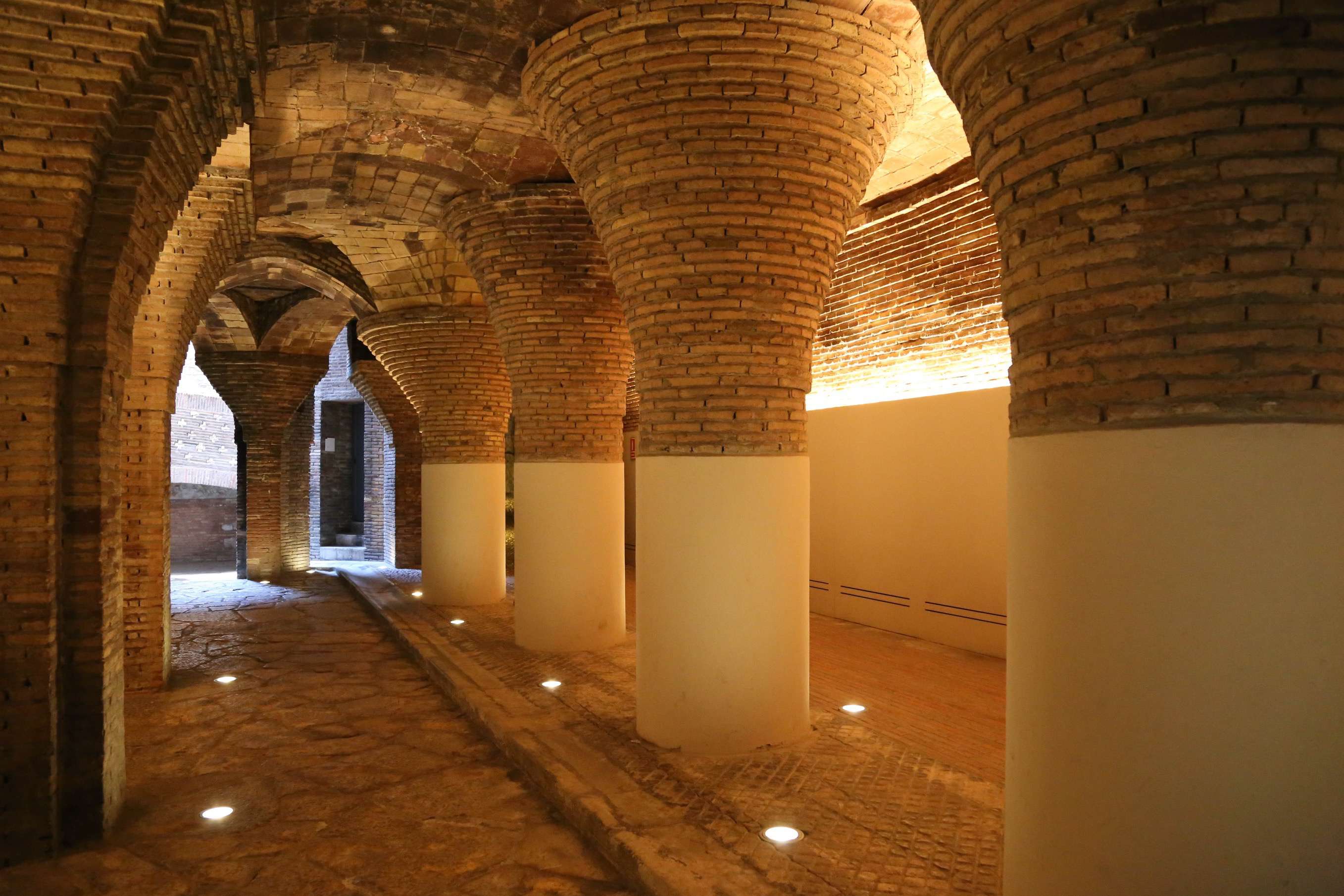 The giant pillars in the basement of Palau Güell support the floors above. Carriages, workers and deliveries would enter here and then ascend a twisting ramp into the Palau.. 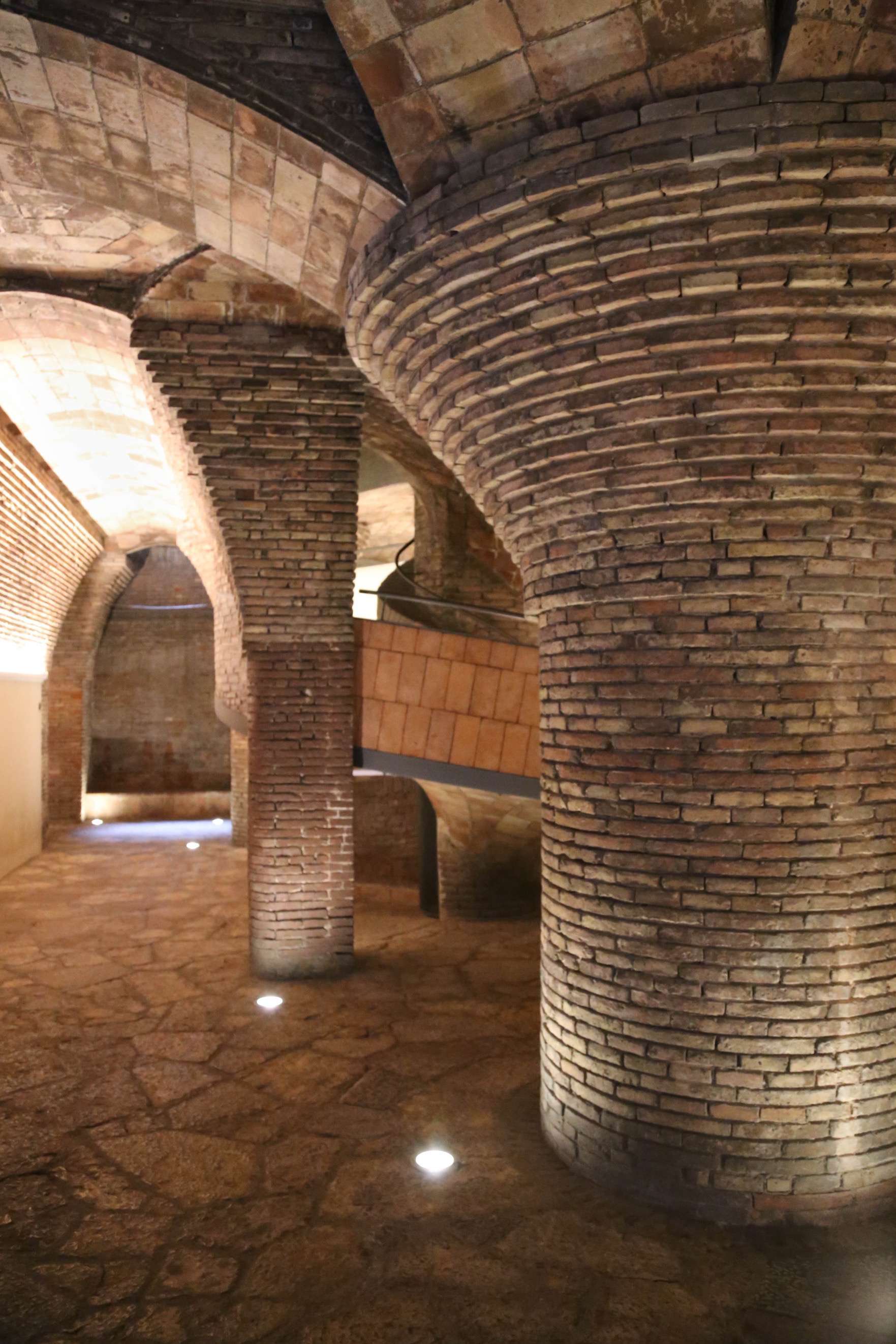 The ramp, center right, was used by guests to walk up who had arrived by carriage.

Gaudi did design and build projects outside of Barcelona; the Catalan city is home, however, to his most famous buildings, and all seven of the Gaudi projects that have been recognized as UNESCO World Heritage Sites, including Palau Güell (1984), are here. 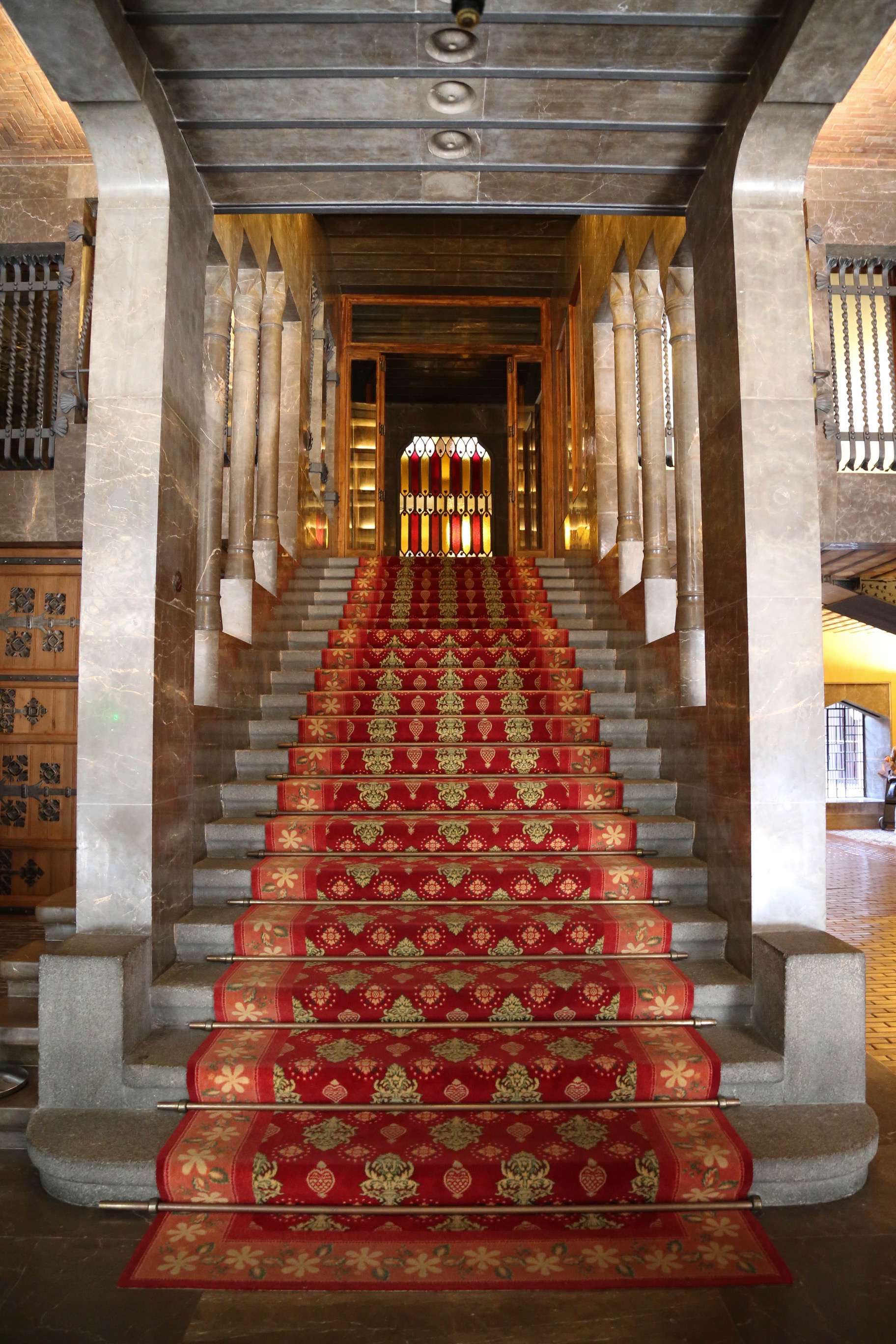 Guests and those who lived in and worked at Palau Güell would ascend this staircase to enter into the main room of the home. 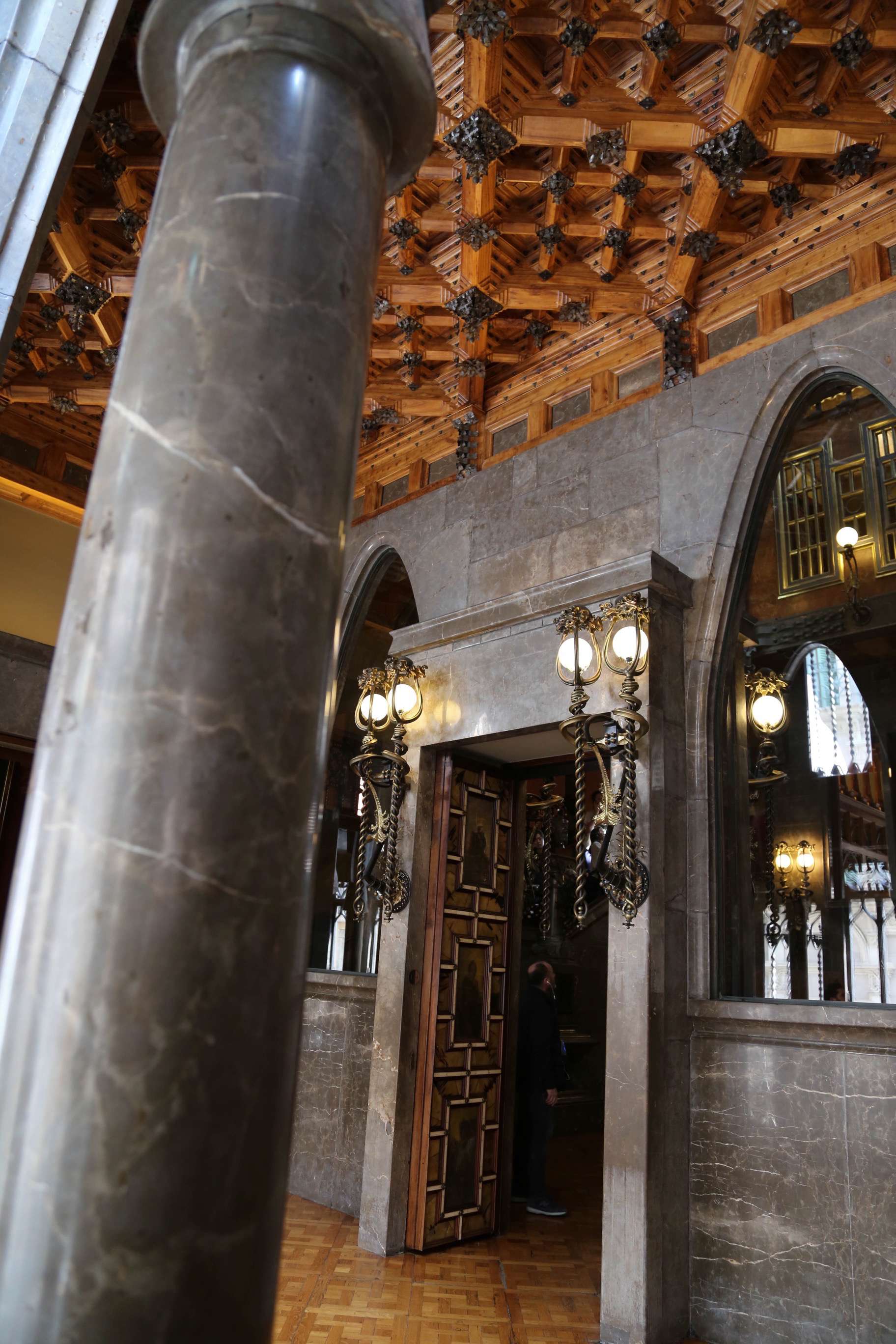 The entryway door to the central hall was an imposing element that clearly made a statement. 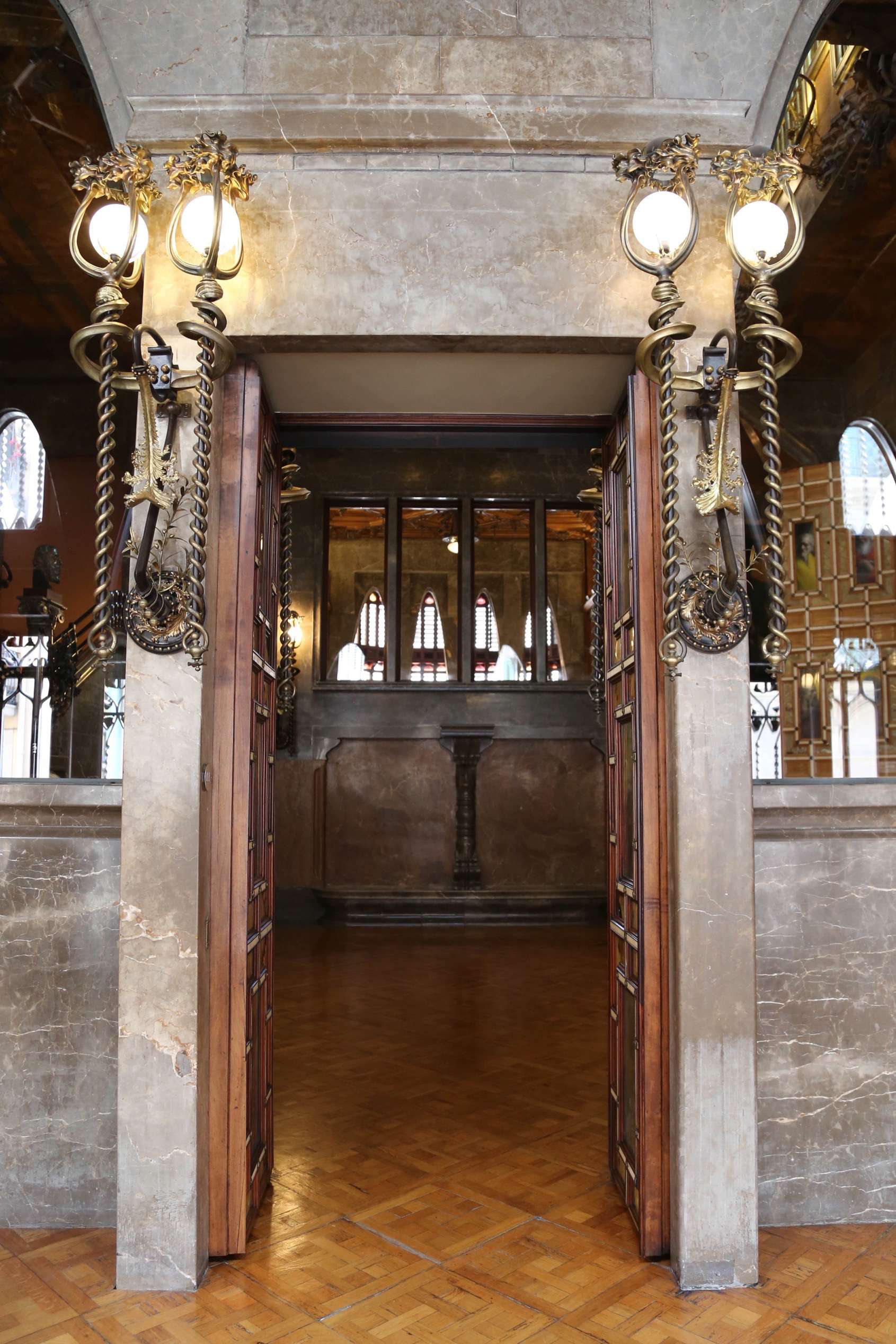 As something of an offset to the imposing look of the doorway into the grand hall, Gaudi’s metalwork for the lights displays playfulness. 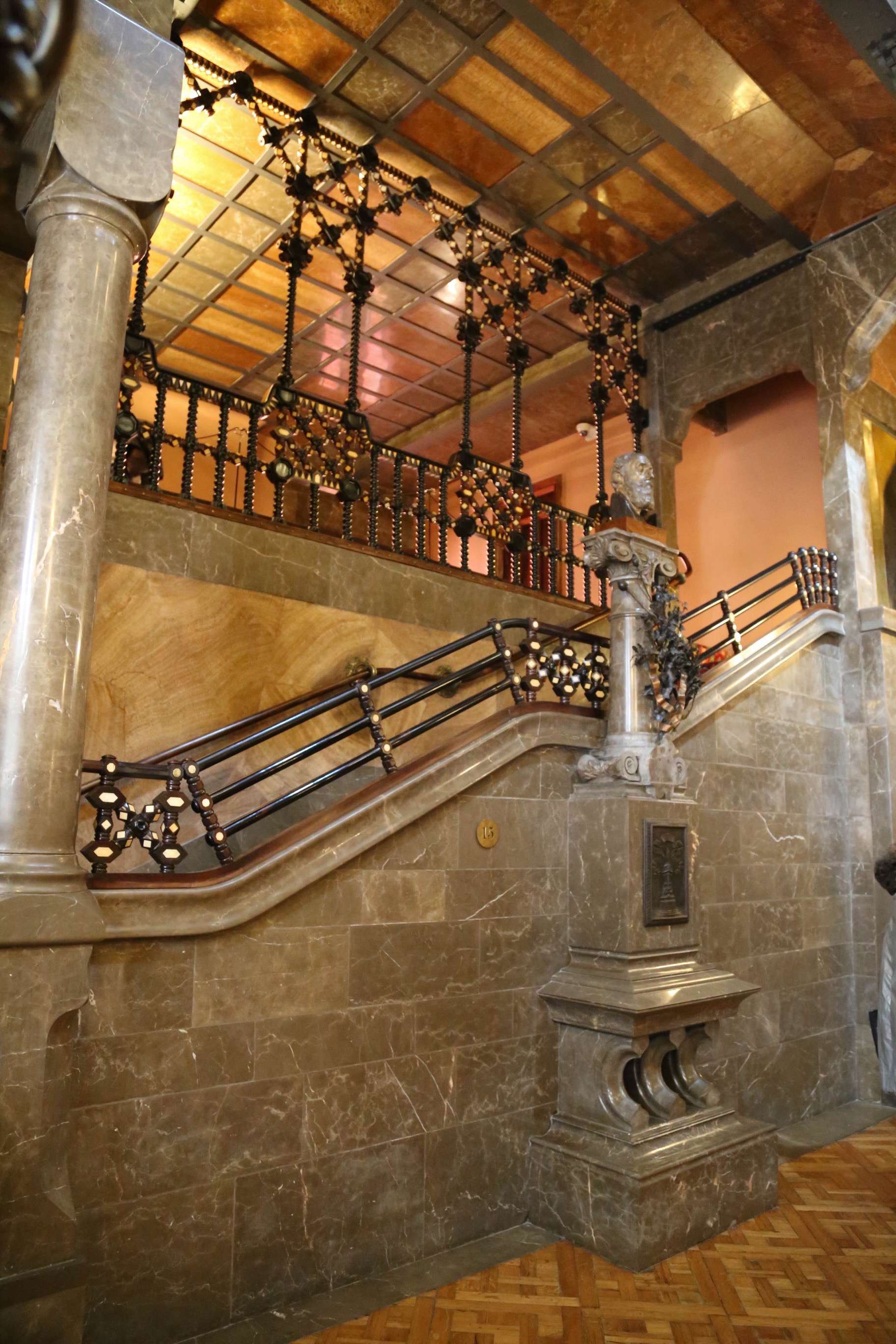 The flight of stairs lead up to the mezzanine level of Palau Güell, and bust of Eusebi Güell sits atop the pillar.

The son of a wealthy industrialist, Eusebi Güell was born in Barcelona, became a textile magnate and amassed a fortune of his own. Additionally, he was active in the politics and affairs of Barcelona, and he was a patron of the arts. For a man of wealth, Güell held a number of unconventional ideas for the time, notions that might be summed up as somewhat socialist – he was concerned with the welfare and working conditions of his workers, he appreciated the natural world, and his taste in architecture tended toward new ideas. In this last area, Antoni Gaudi, who was just then making a name for himself as an architect, would be the ideal vessel to bring forth Güell’s idea of a grand family home. Güell was obviously pleased with the result of this important commission because he would go on to utilize Gaudi’s talents for other major projects. 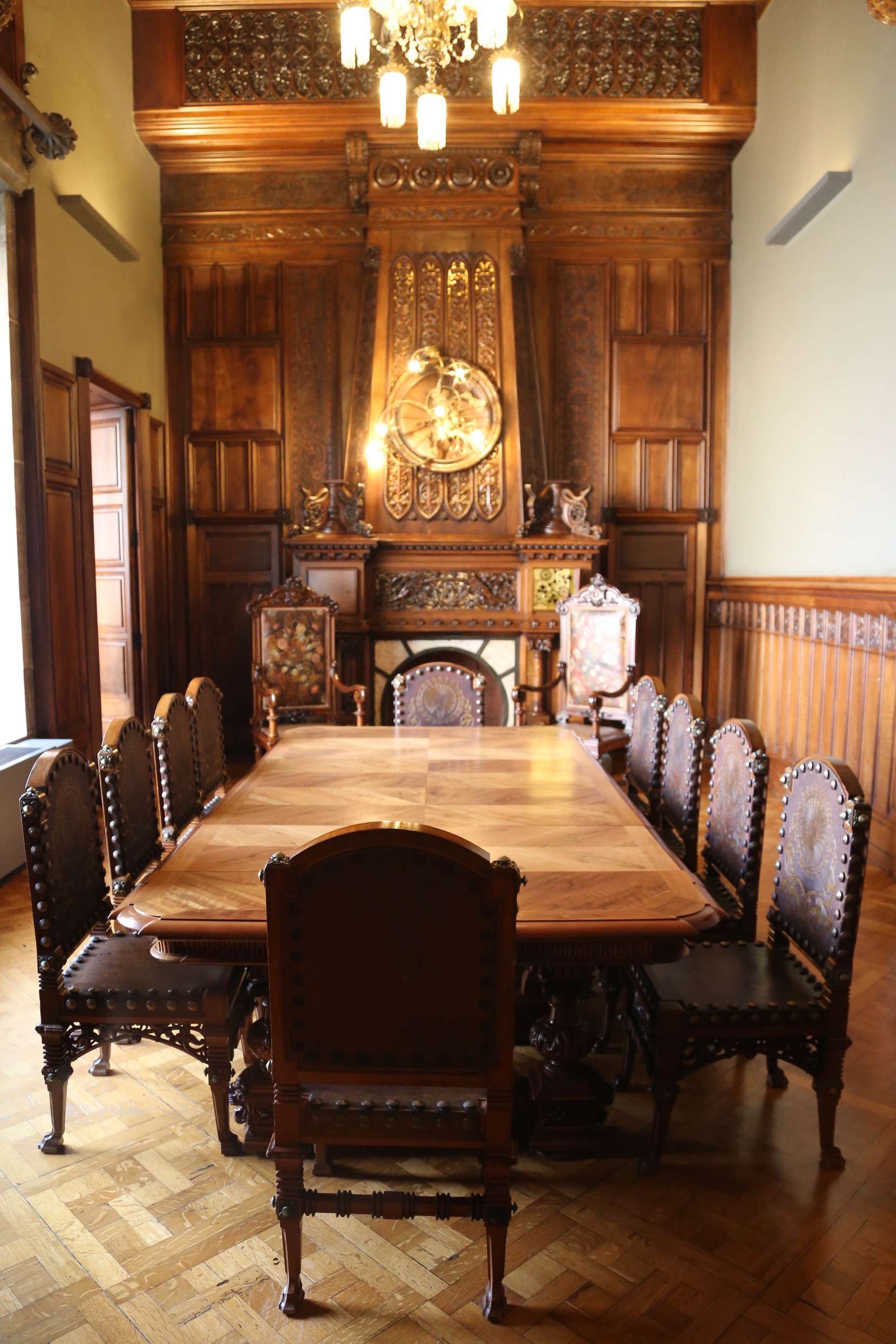 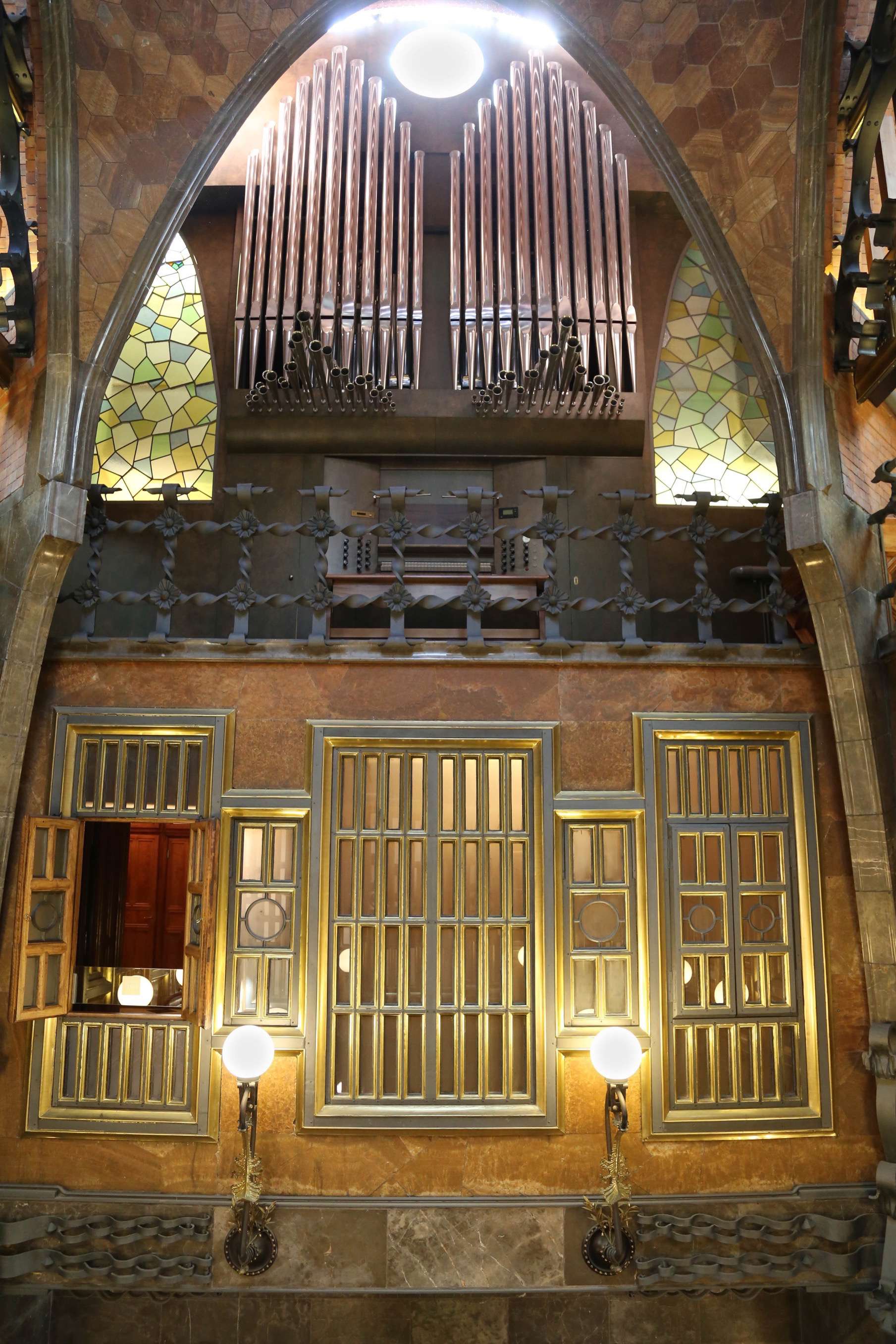 Güell spared no expense when he commissioned Antoni Gaudi to design and build Palau Güell. High above the room, against one wall was a pipe organ with dozens of pipes where Güell and his guests would be entertained. 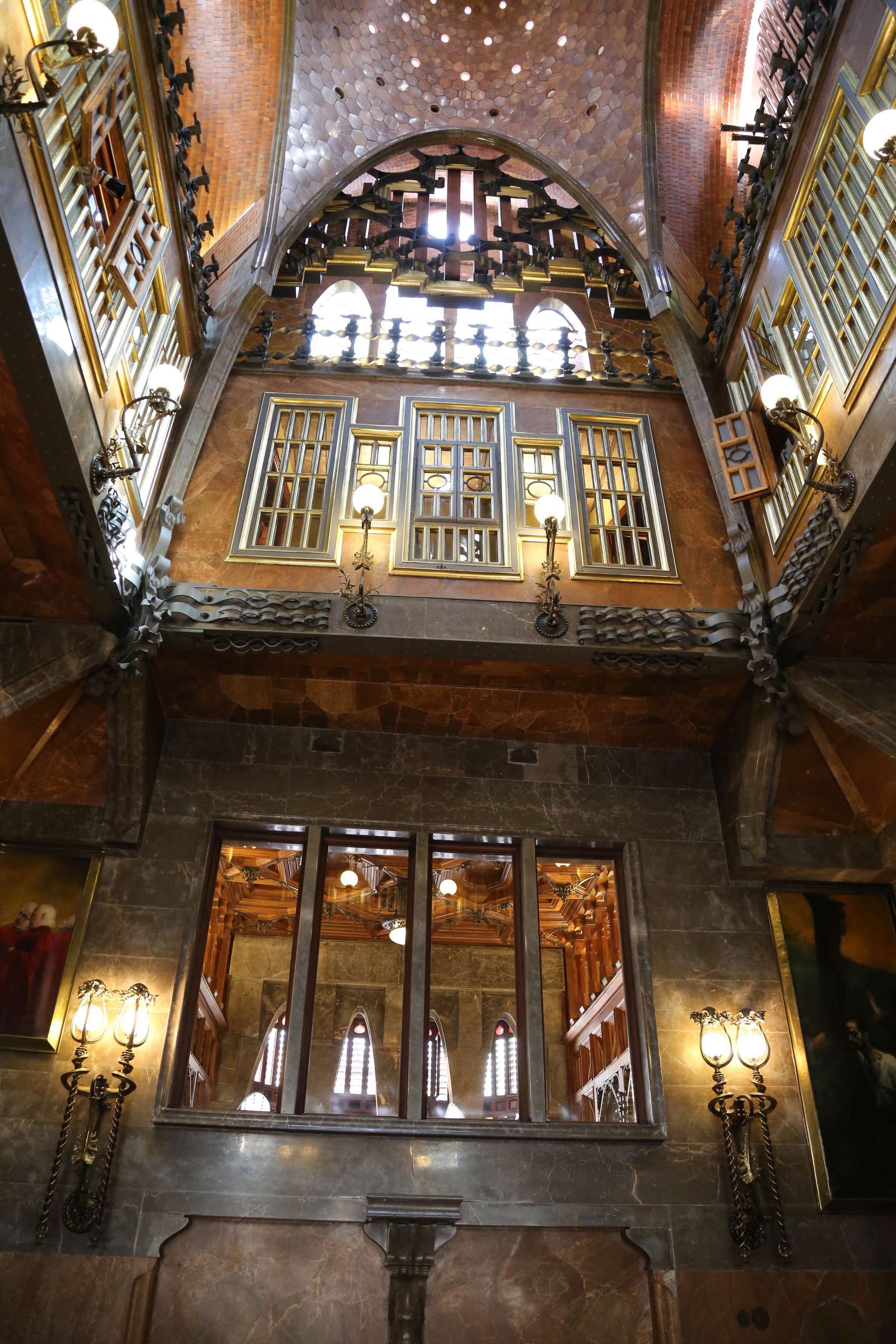 The wall on the other side of the same room with the pipe organ is filled with lavish details and a ceiling with glittering tiles. 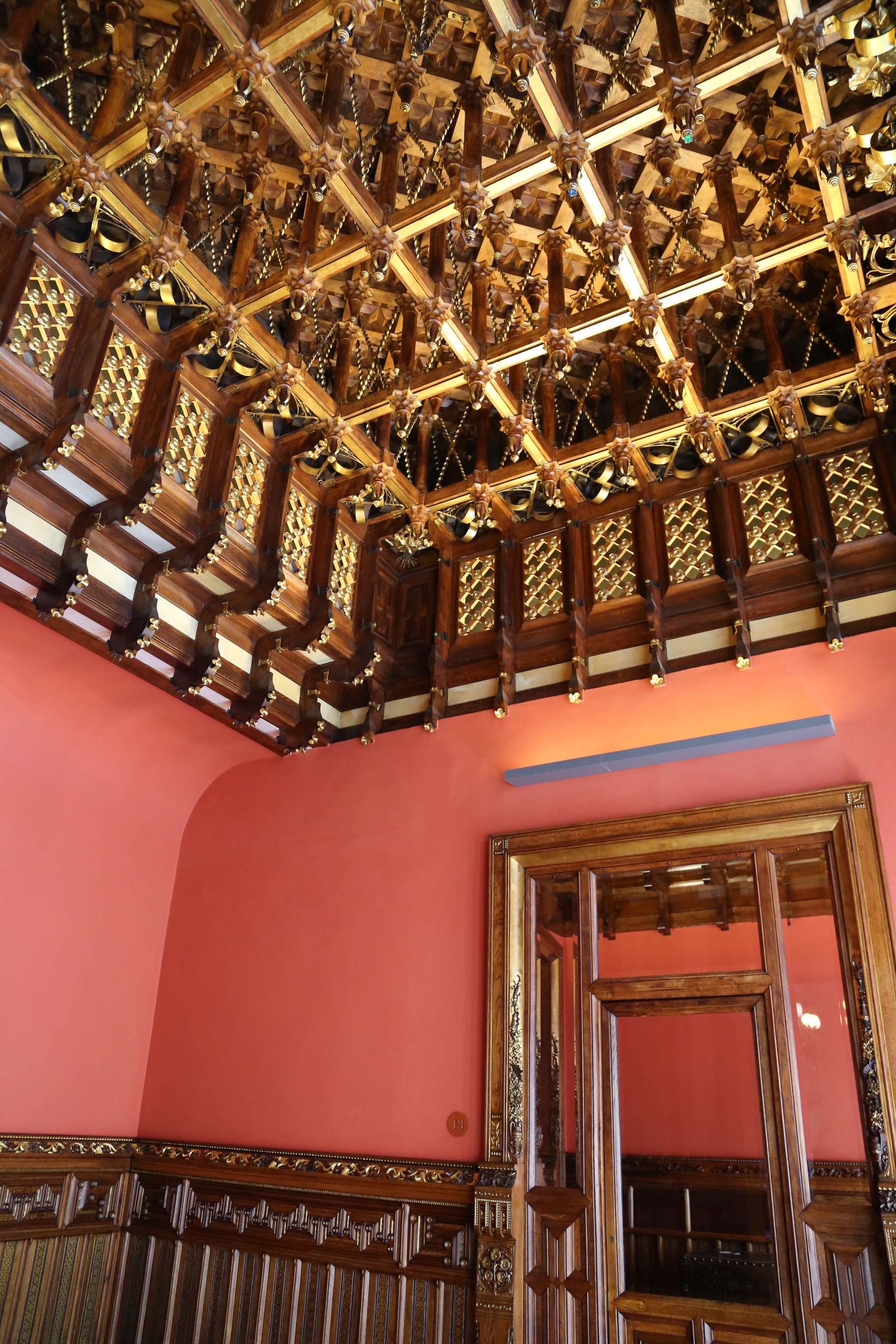 The intricate wood work of the wainscot and ceiling in this room creates a sense of dimensionality, and has been restored to its original grandeur. 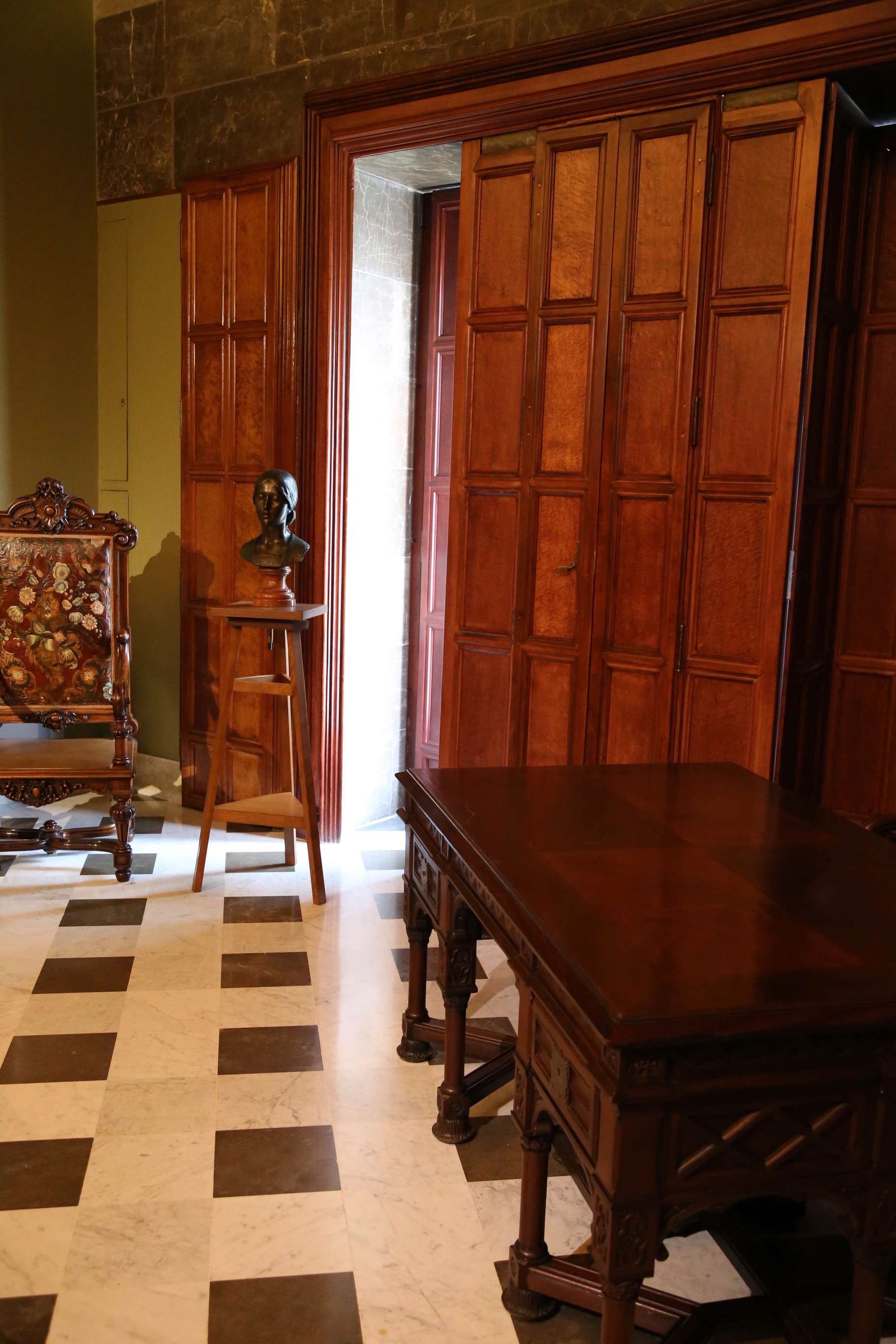 A private room for the family, on an upper floor, with a bust of Güell’s wife, Luisa, perched on a pedestal.

Palau Güell was designed and built as a home between 1885 and 1890. The Palau consisted of seven levels, including a basement and the rooftop. And while most of the rooms were square and more traditional, a number of areas of the home were anything but. One of the most striking examples of the Avant-garde approach at Palau Güell is the roof, with its 20 chimneys and a rooftop spire that is nearly 50 feet tall. 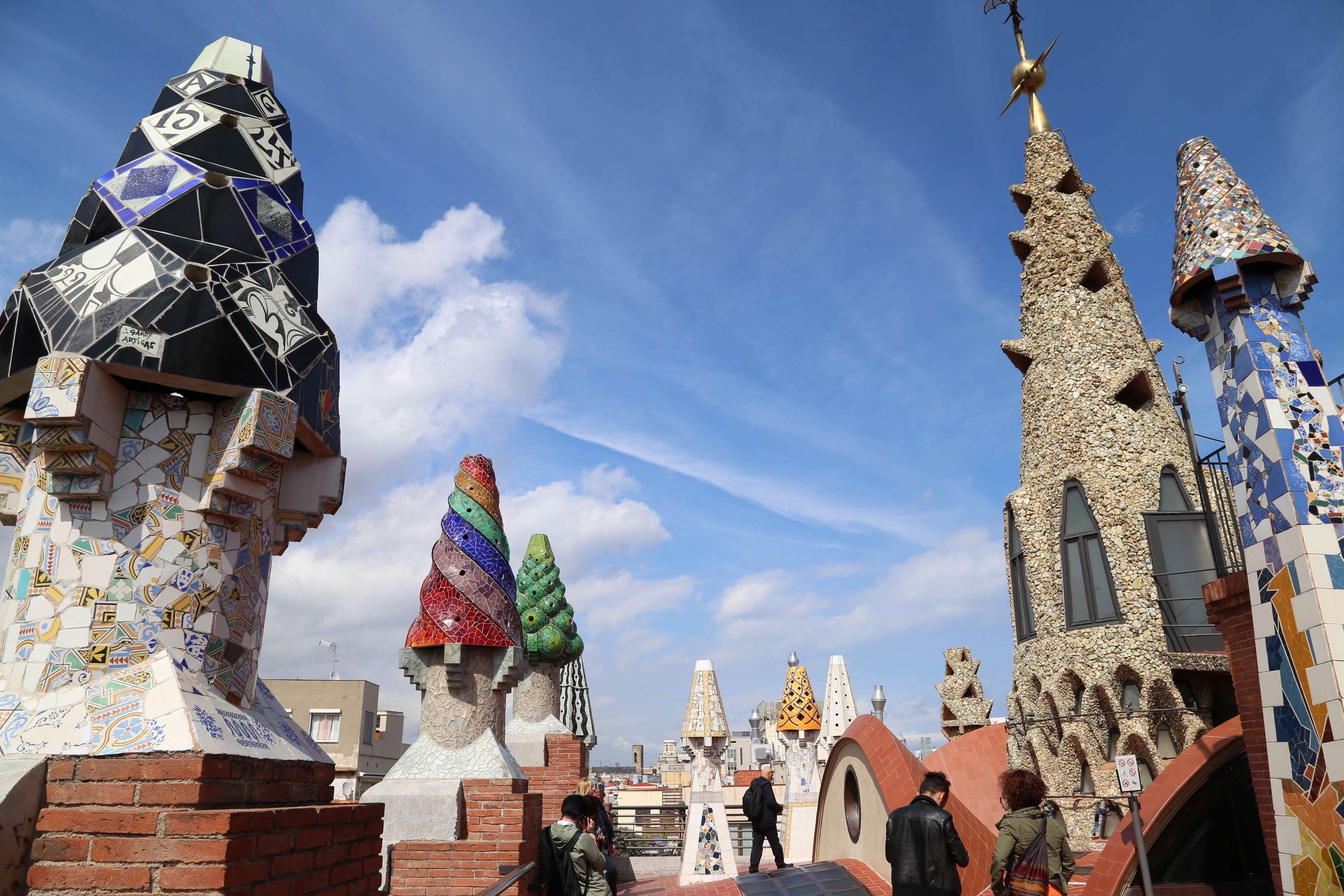 Some people contend that Antoni Gaudi may well be the most inventive designer of chimney crowns in the world. On signature projects, like Palau Güell, each chimney is given an individual look. 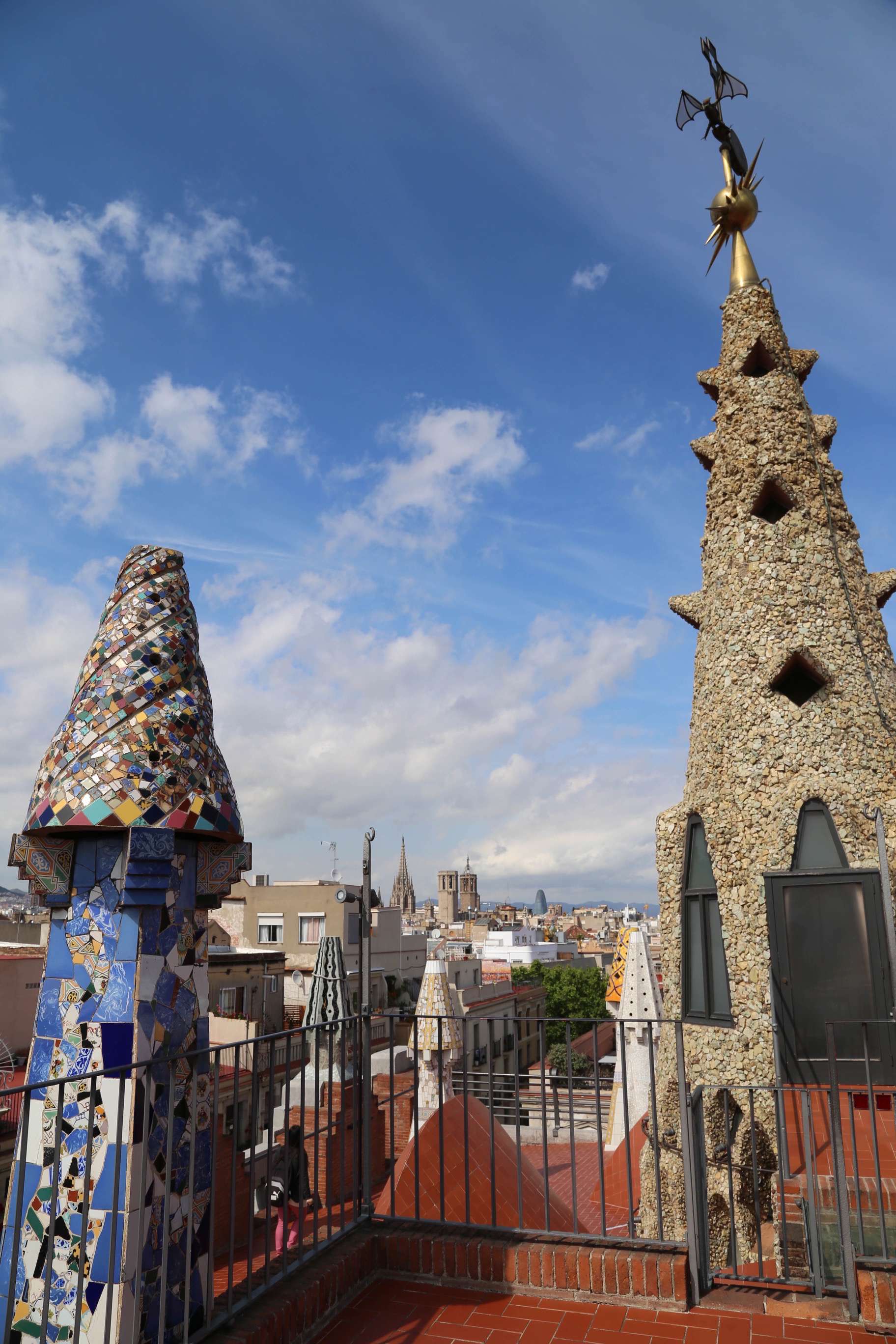 The rooftop spire at Palau Güell, right, is nearly 50 feet in height. 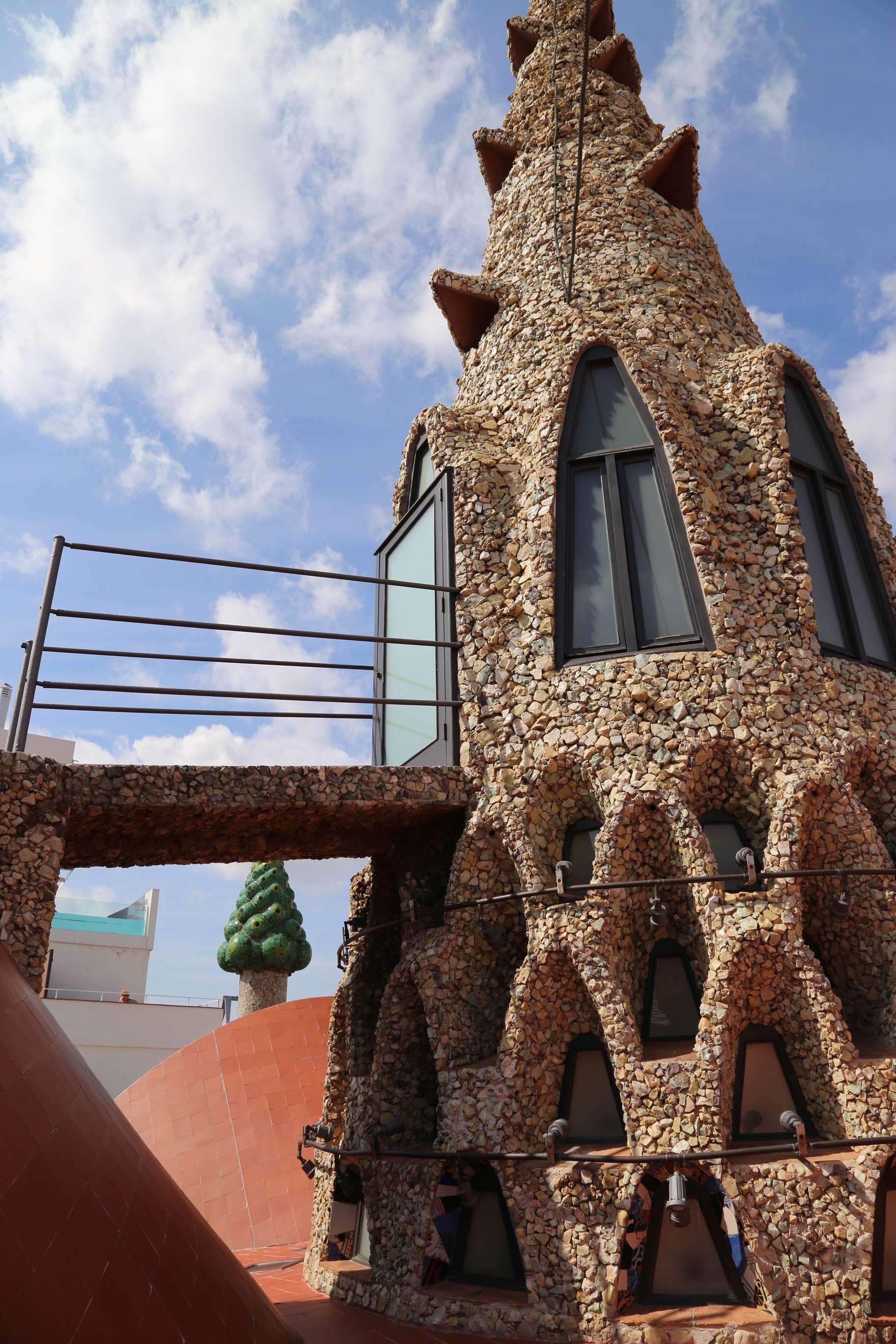 Visitors to Palau Güuell can walk into the top of the rooftop spire to get a closer look at the wonders designed by Antoni Gaudi. 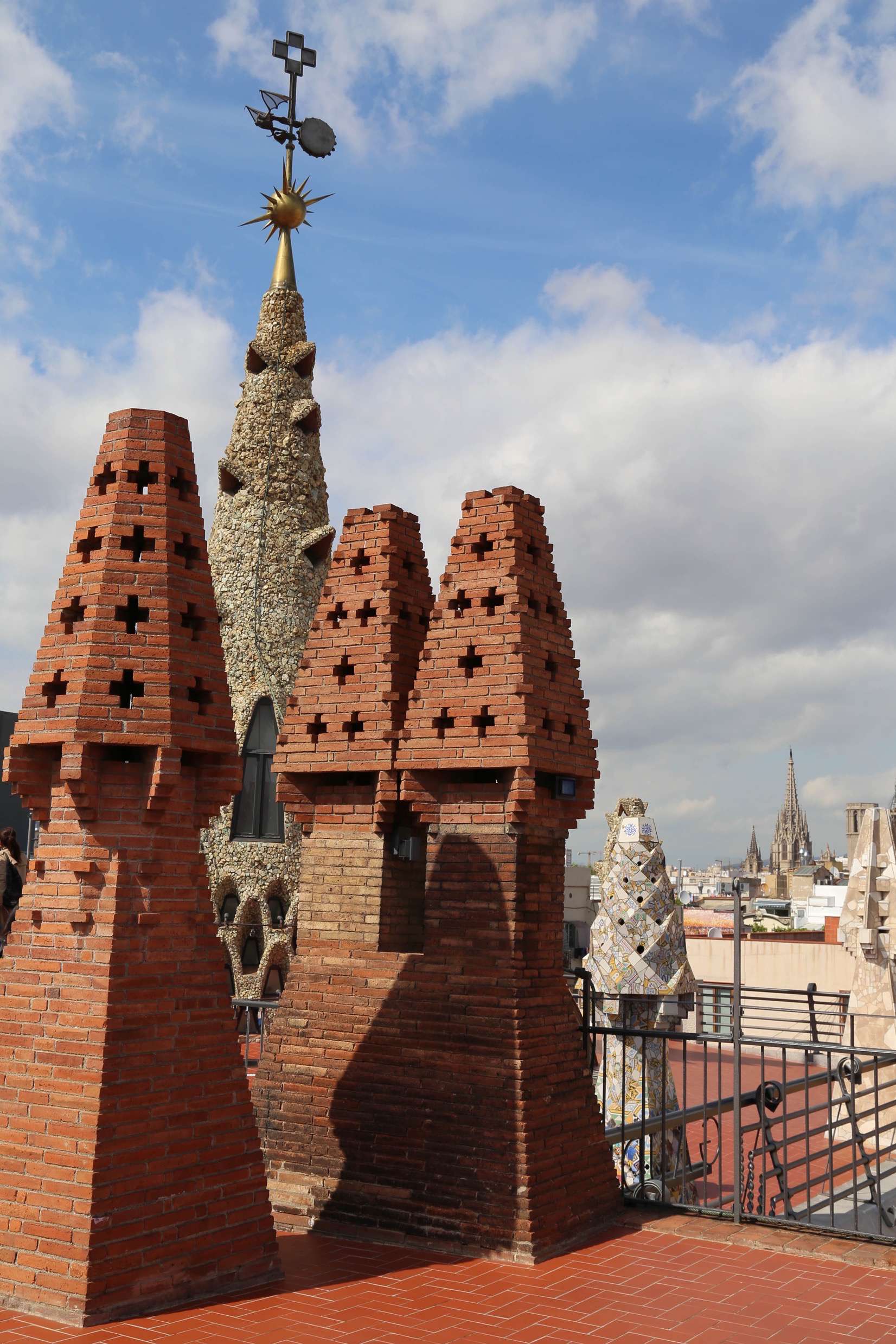 Even chimneys at Palau Güewll not festooned with trencadis, or colored broken tiles and pieces of ceramic, look like few other chimneys in the world. 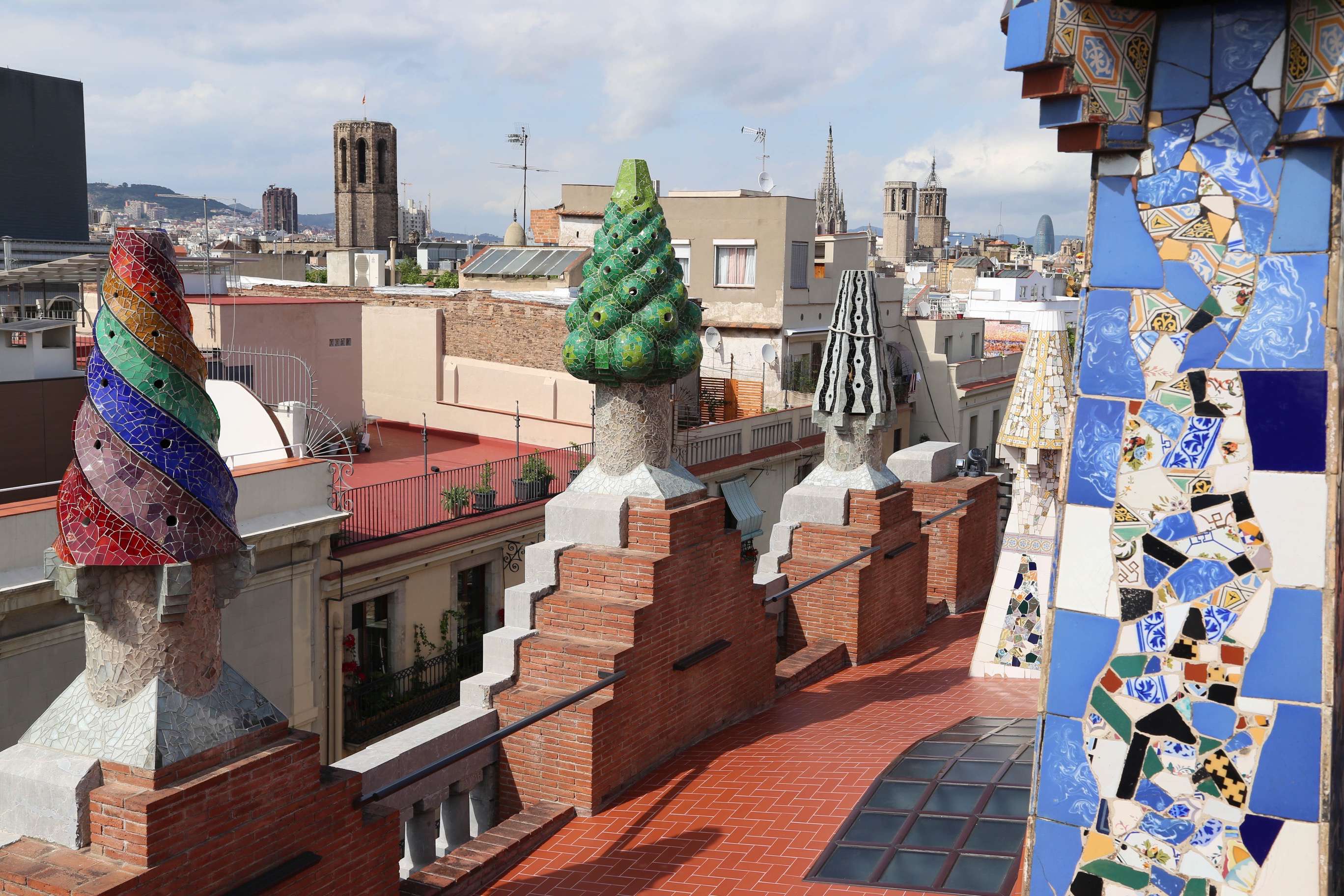 Gaudi seemed to find a near-endless variety of ways to design chimney crowns, taking great care that they were as functional as they were beautiful. Even a fierce winter wind would not push smoke back down into the fireplace and disturb those warmed by the fire.

As anyone who has ever visited Barcelona knows, this is a unique city filled with amazing delights. In fact, there is so much to see and enjoy in Barcelona, that Palau Güell does not even make the Top 10 list of many travel guides and websites. But that does not diminish the importance or beauty of Palau Güell. 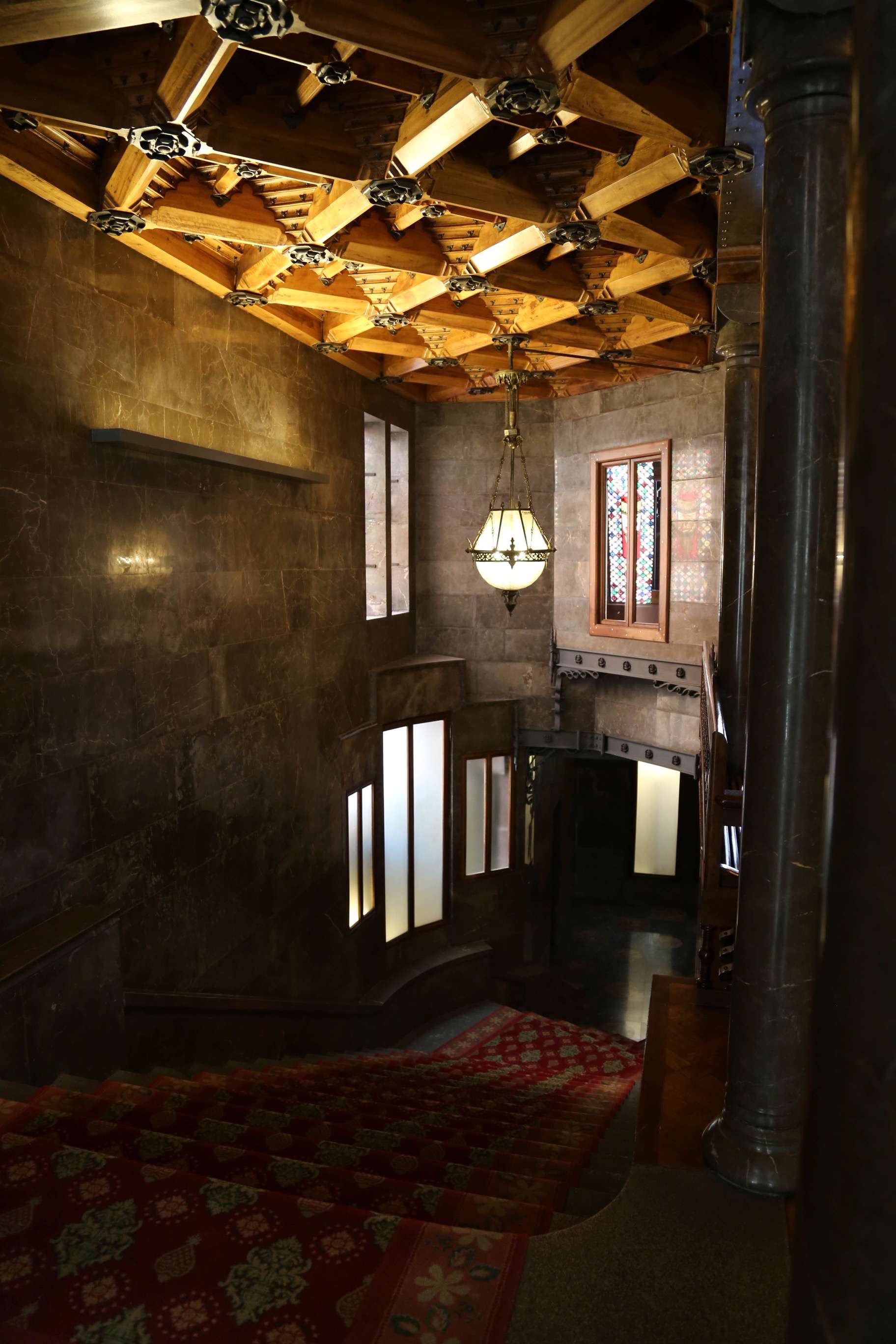 The use of darker-colored stone for the walls and louvers over the windows give many spots at Palau Güell a somber, formal feel.

Any lover of architecture or fan of one of the greatest architects of all time will be glad to visit the place that helped launch the career of a genius. 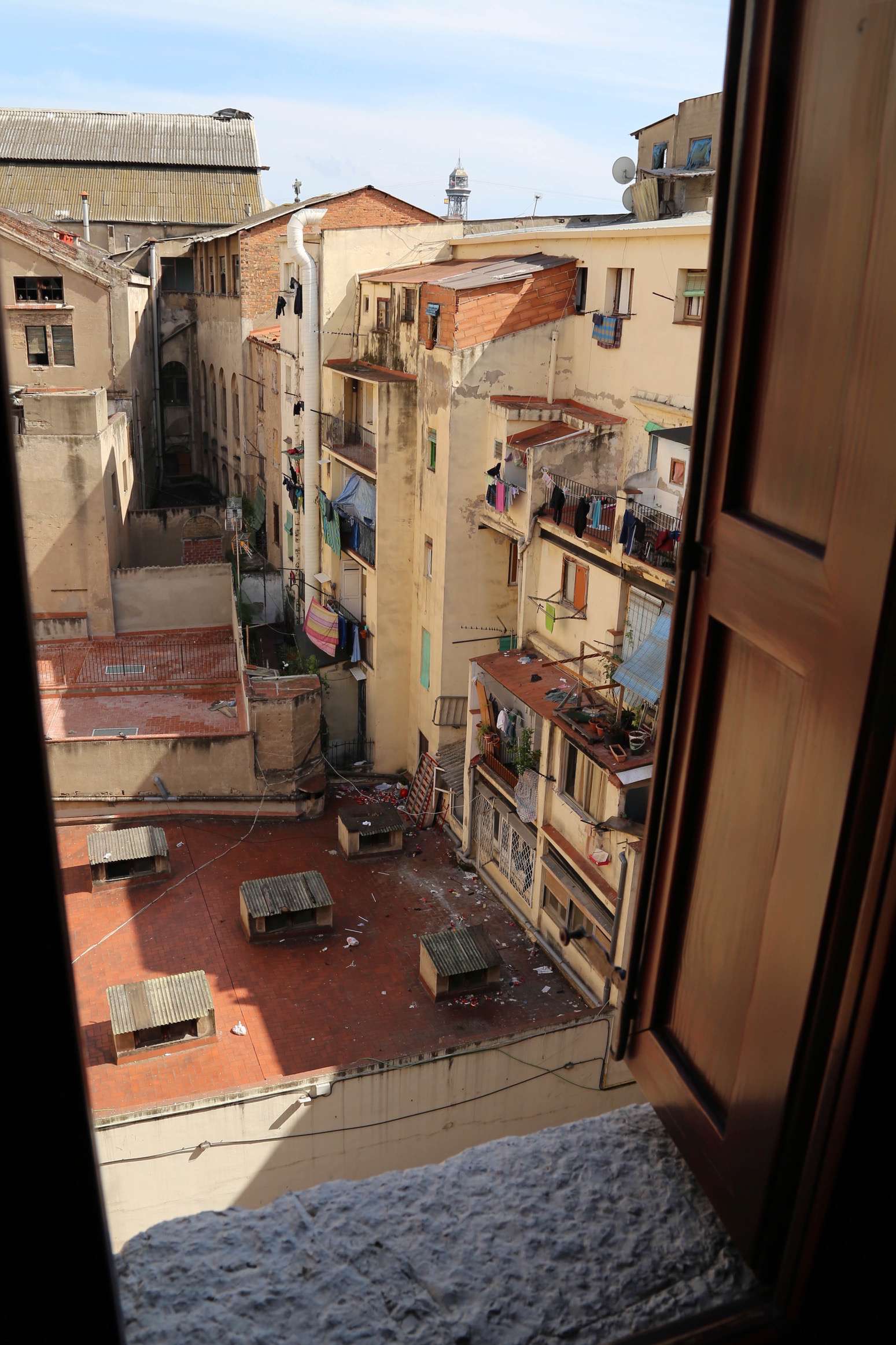 A view from an upper window at Palau Güell to the courtyard of a nearby building.

Form more information about Palau Güell, click over to these websites: