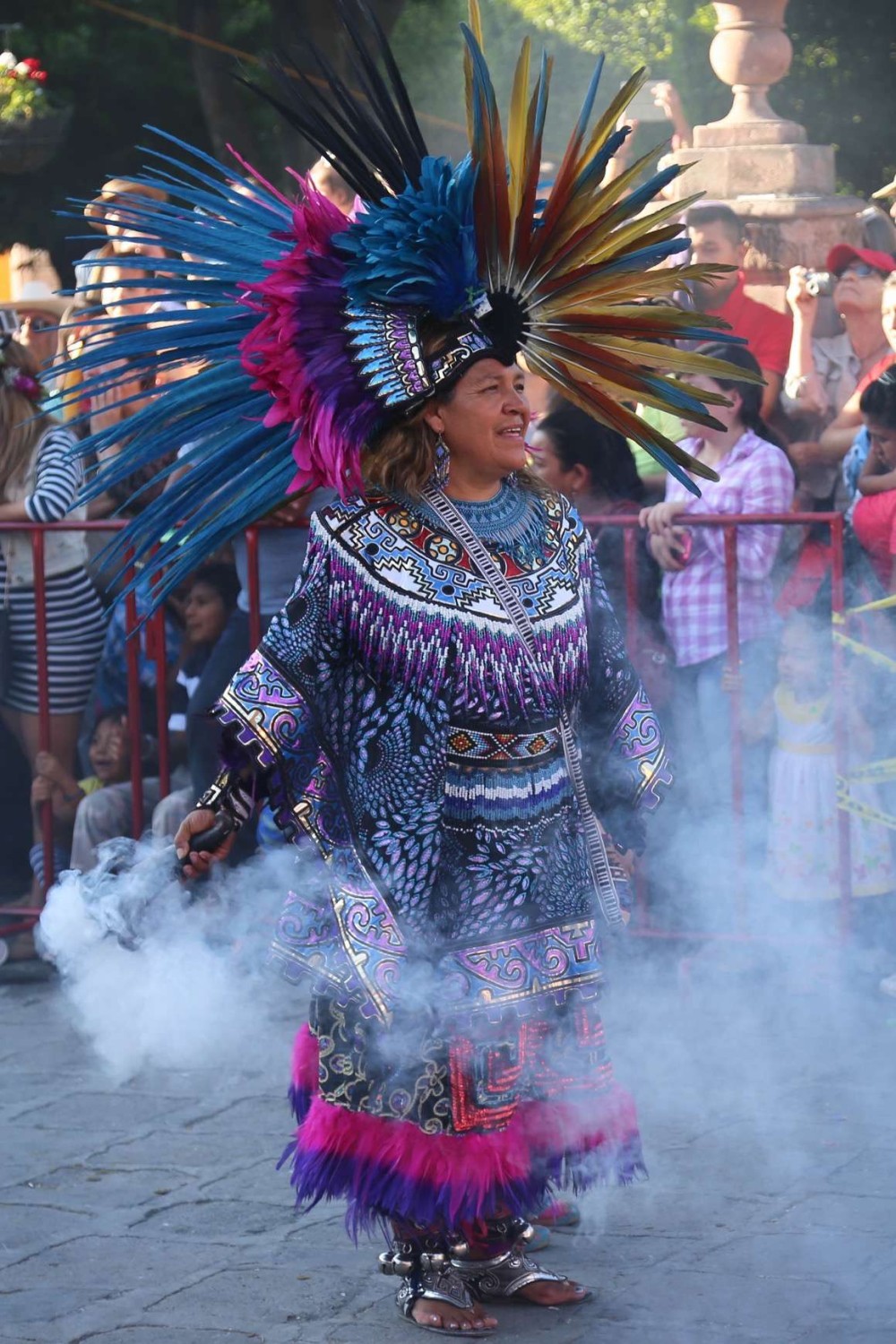 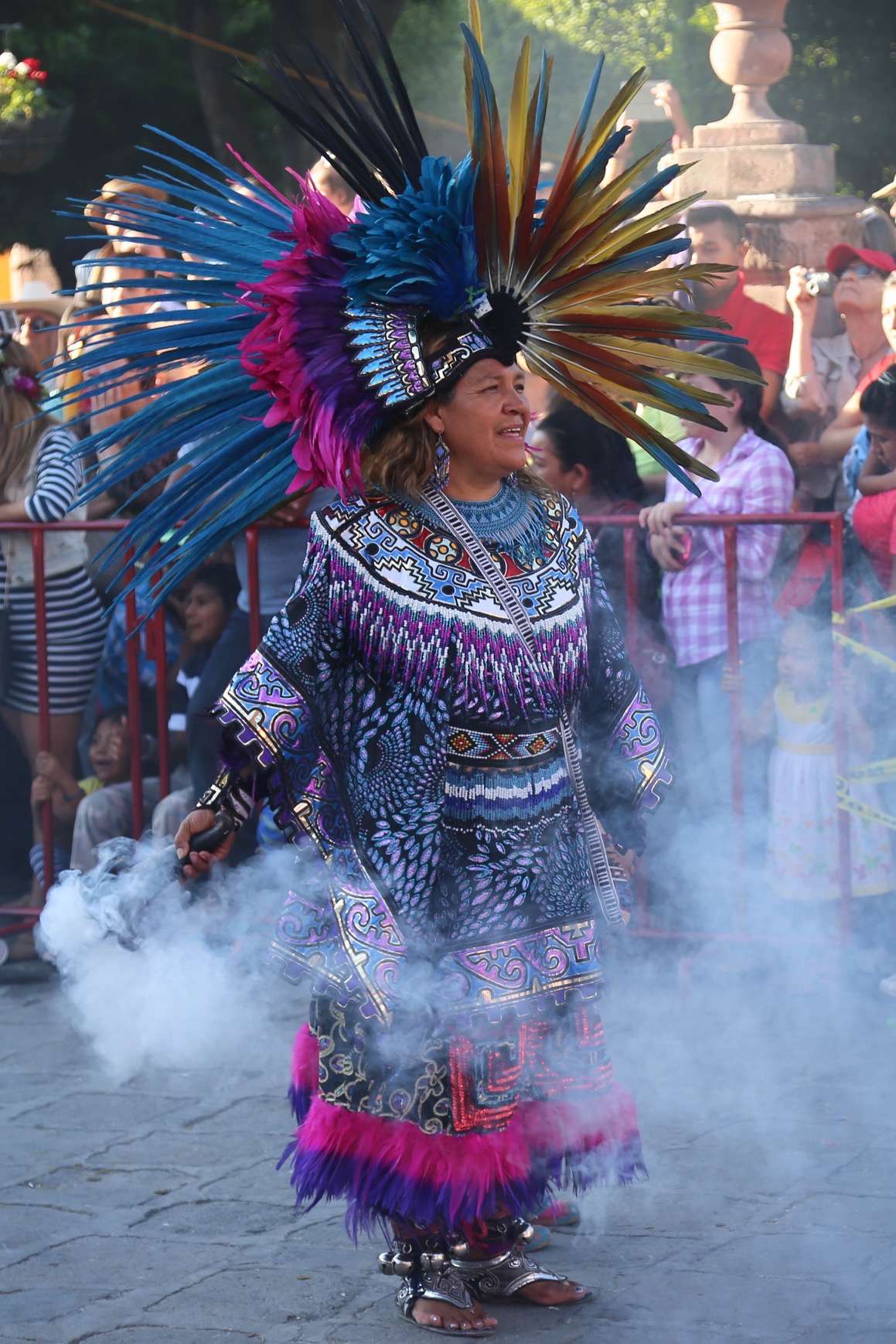 This woman is smokin’ hot and happy in her costume as she pauses in El Jardin during a parade in San Miguel de Allende, Mexico.

To calculate how much a city might love a parade, take the population, divide by the number of parades and finally, factor in the total number of parade participants. By those measures San Miguel de Allende may well be one of the most parade-loving towns in the world. 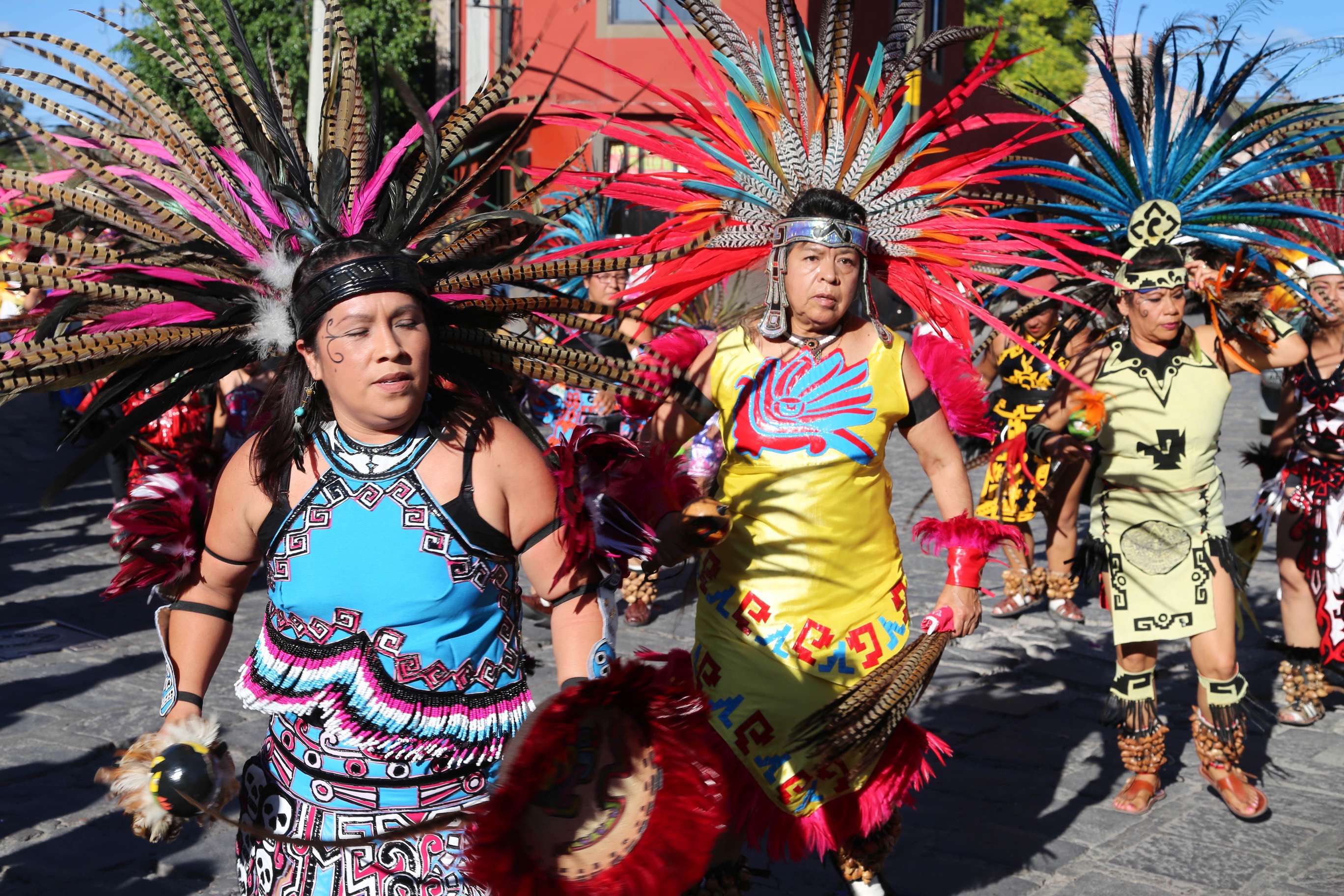 Each costume has a personality all its own and tells a story about the wearer and what they represent. 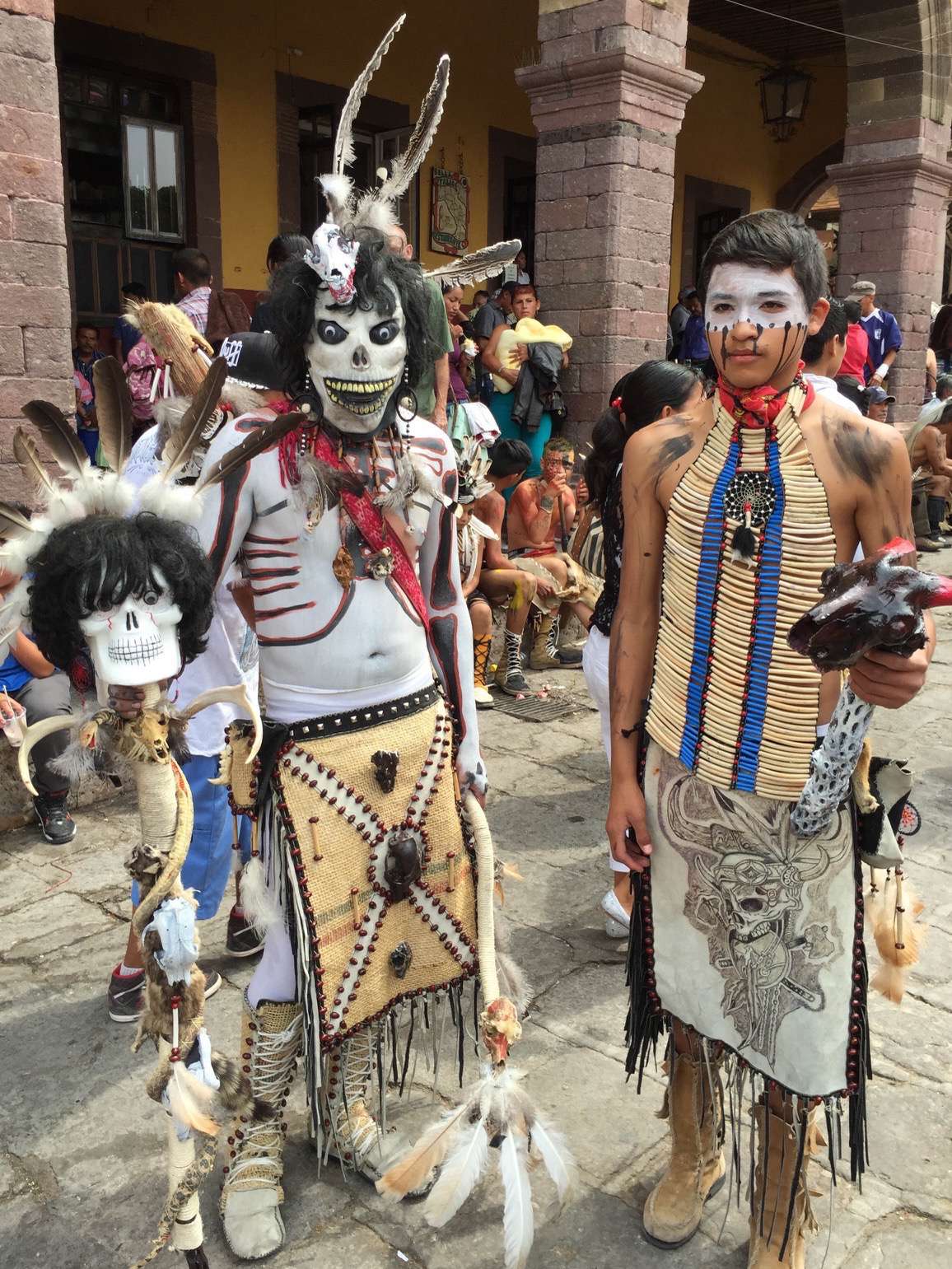 This pair takes a break after more than a day of strutting their stuff.

Parades here are punctuated with fireworks, elaborate costumes and dancing that would make celebrations in New York City, New Orleans or Pasadena, CA envious. And during some of San Miguel’s parades, hundreds of horses gather from miles around to be part of the festivities. 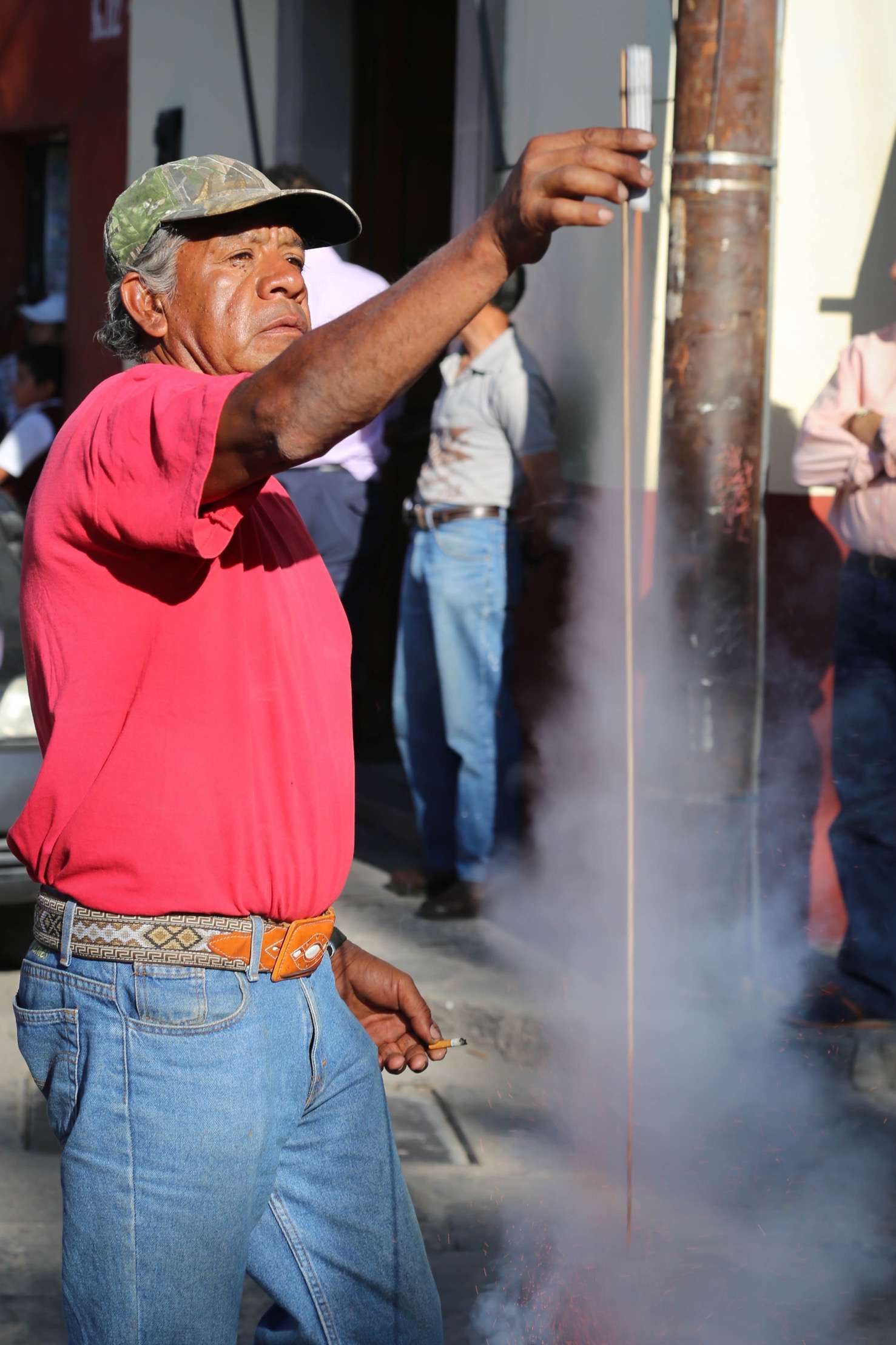 Safety standards are a bit flexible, but a lit cigarette is all this rocketeer needs to launch a rocket into the sky.

Part of Mexico’s cultural heritage is a blend of ethnic, religious and celebratory. Indigenous peoples (each with a distinct history and language) populate all parts of Mexico. Also, the Catholic Church plays a significant role in many peoples’ lives, and Mexicans know how to enjoy a good party. All that and more combines in the parades in San Miguel de Allende. 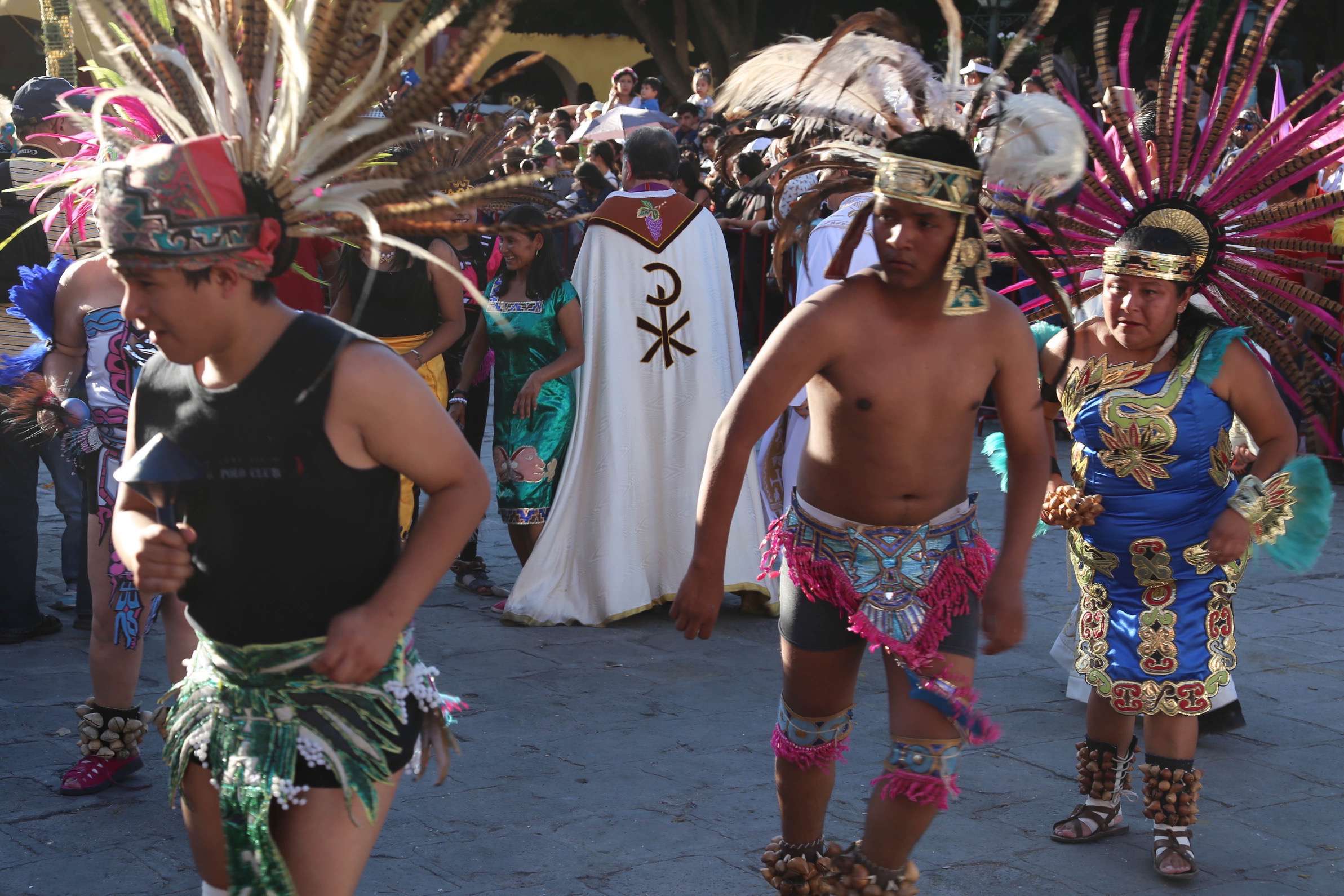 Mexico has many beliefs and they combine at times like these when a Catholic priest wades into a crowd of parade performers. 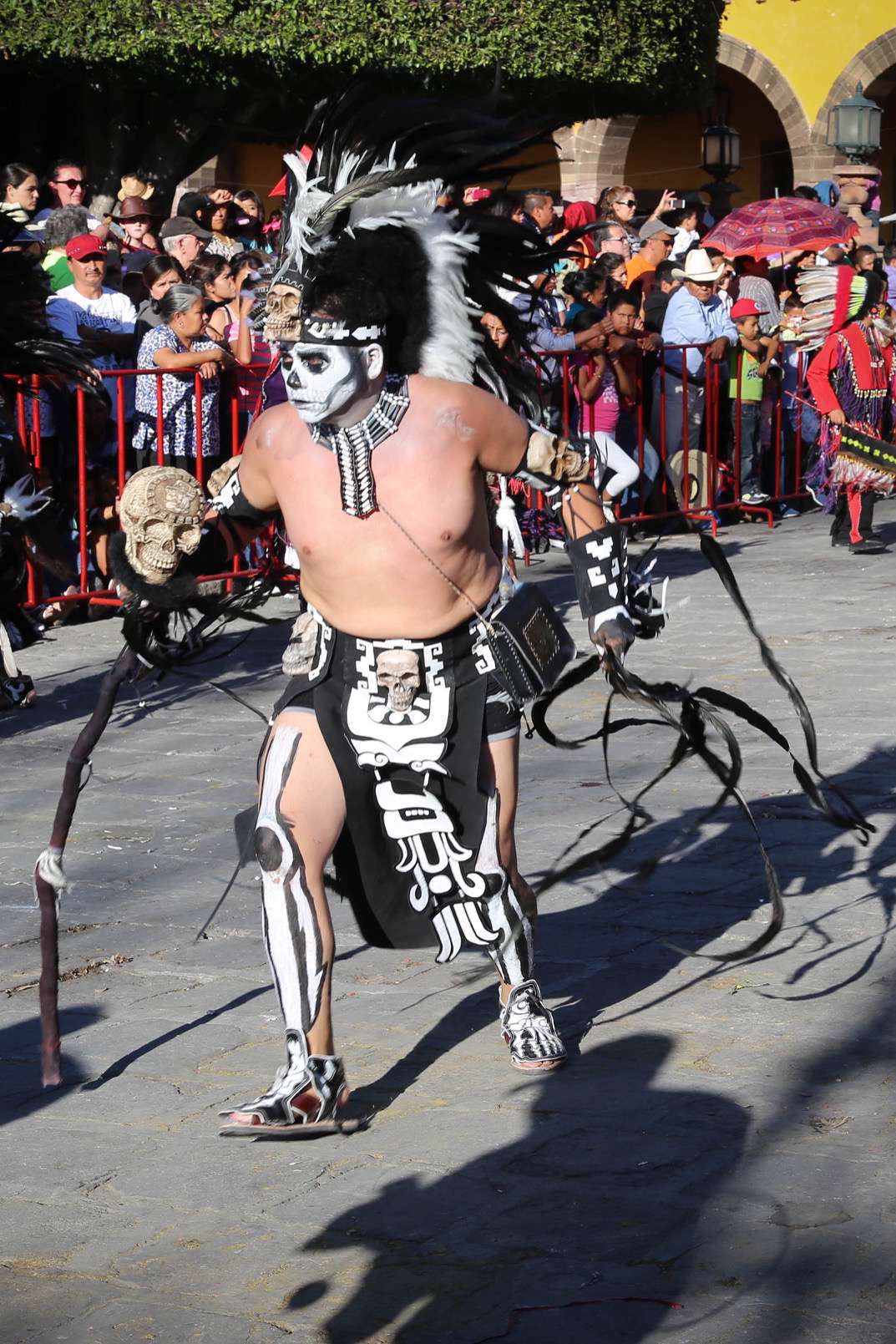 The notion of death in Mexico is quite different than in the United States of America and is meant to honor those who have gone before.

Add to that, San Miguel de Allende has a special place in the history of modern Mexico because it is the first municipality to shrug off Spanish colonial rule. Diez y Seis, the famous “Grito” declaring independence from Spanish colonial authority was proclaimed loudly and proudly in 1810 in San Miguel at nearly the same time as it was in nearby Delores Hidalgo. 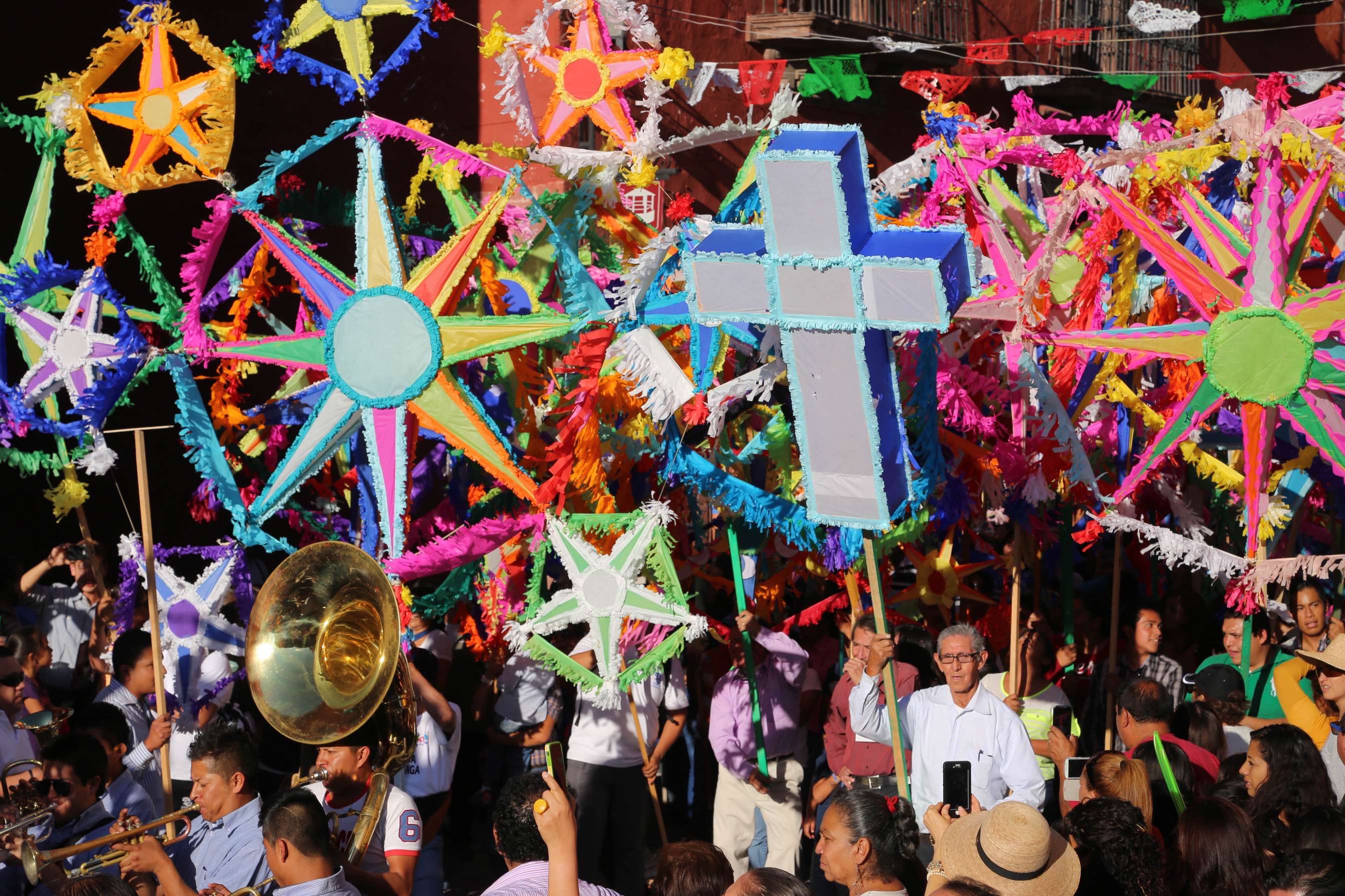 Faith and festival collide at many points along the parade route. 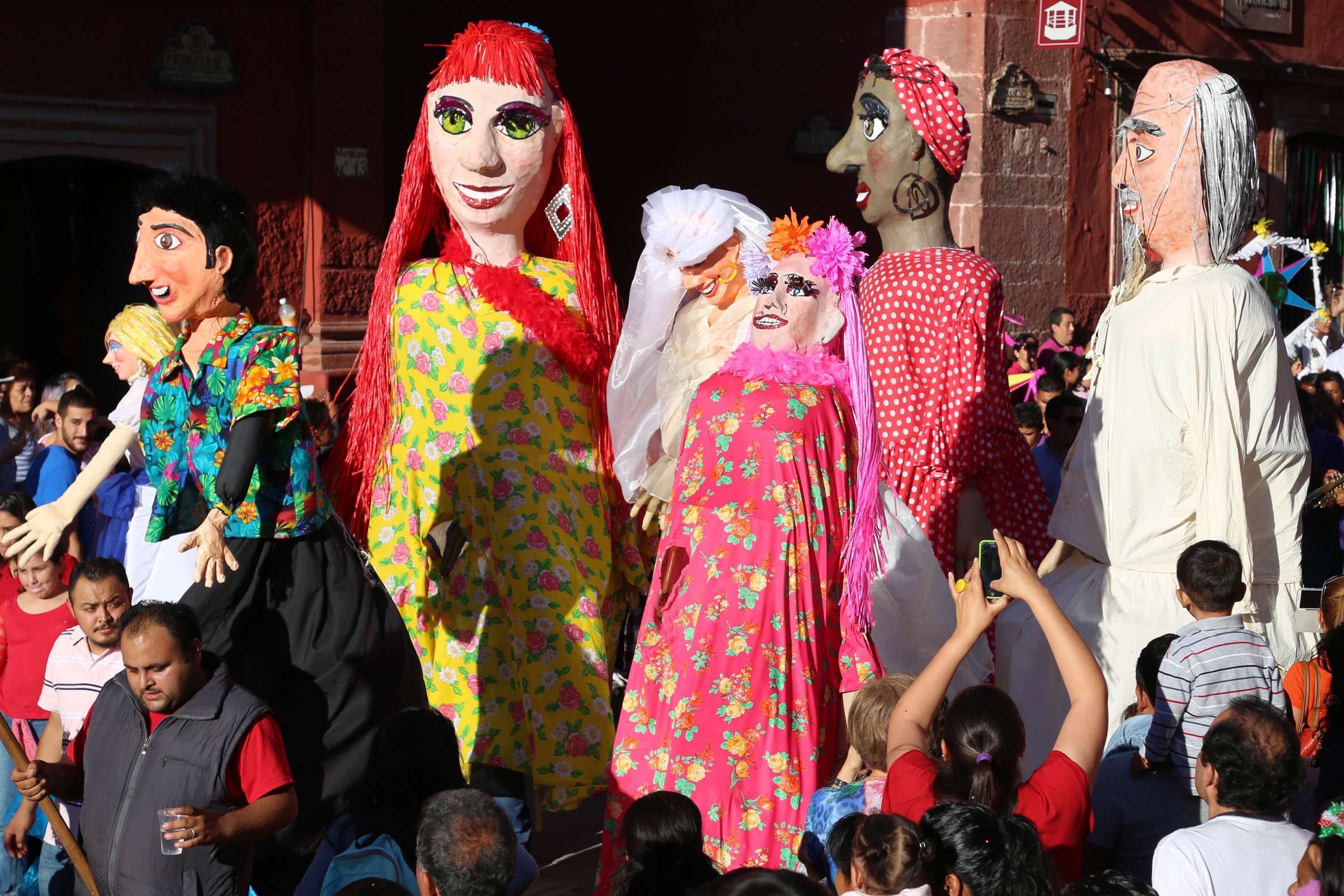 The parades of San Miguel de Allende become larger than life in more ways than one.

The busy season for San Miguel’s parades begins in mid-September and runs through the end of October, when Dia de los Muertos (Day of the Dead) is celebrated. But don’t worry this parade-loving pueblo has events throughout the year that have plenty of costumes, noise and fireworks. 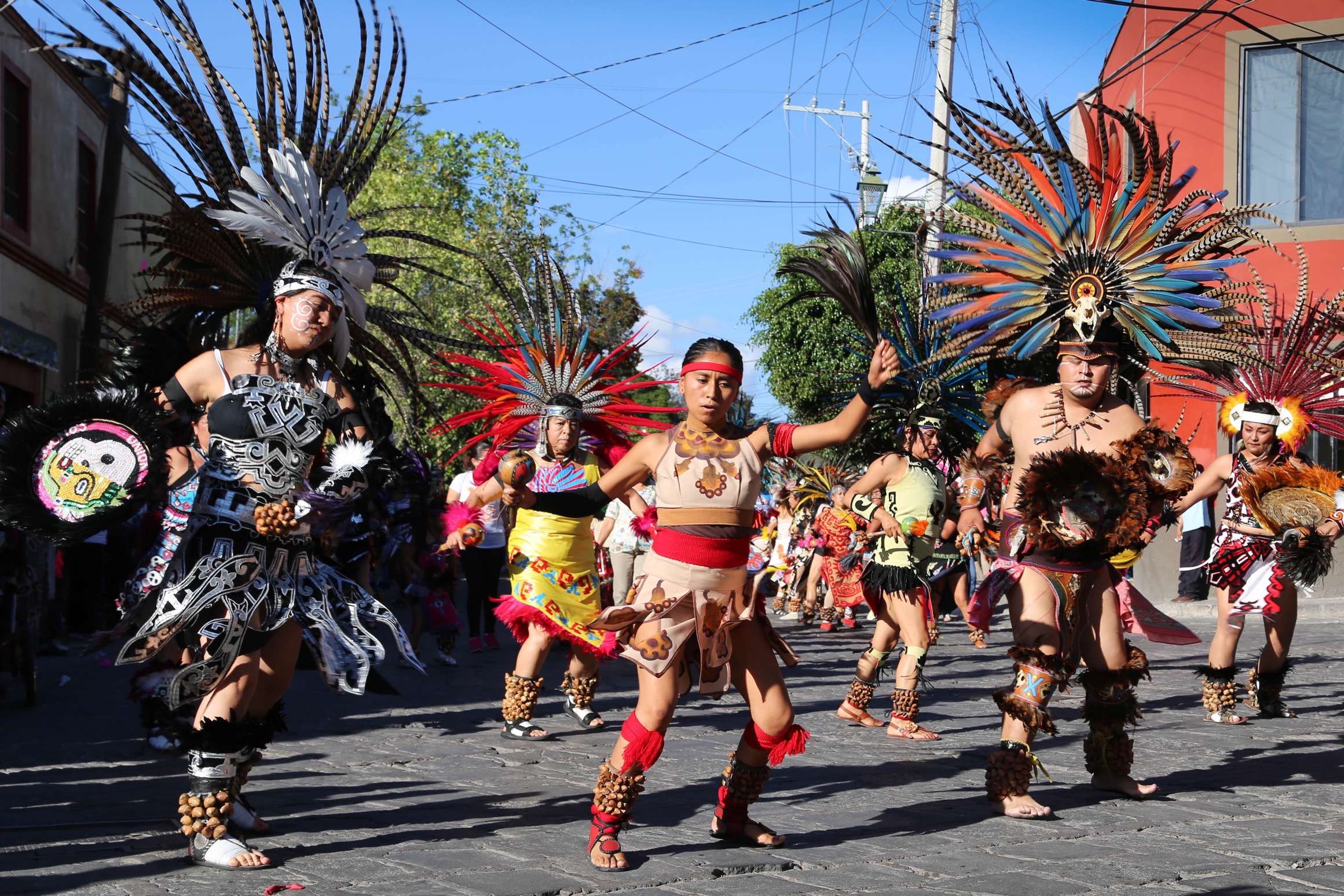 There is intensity, passion, and joy in the parade. 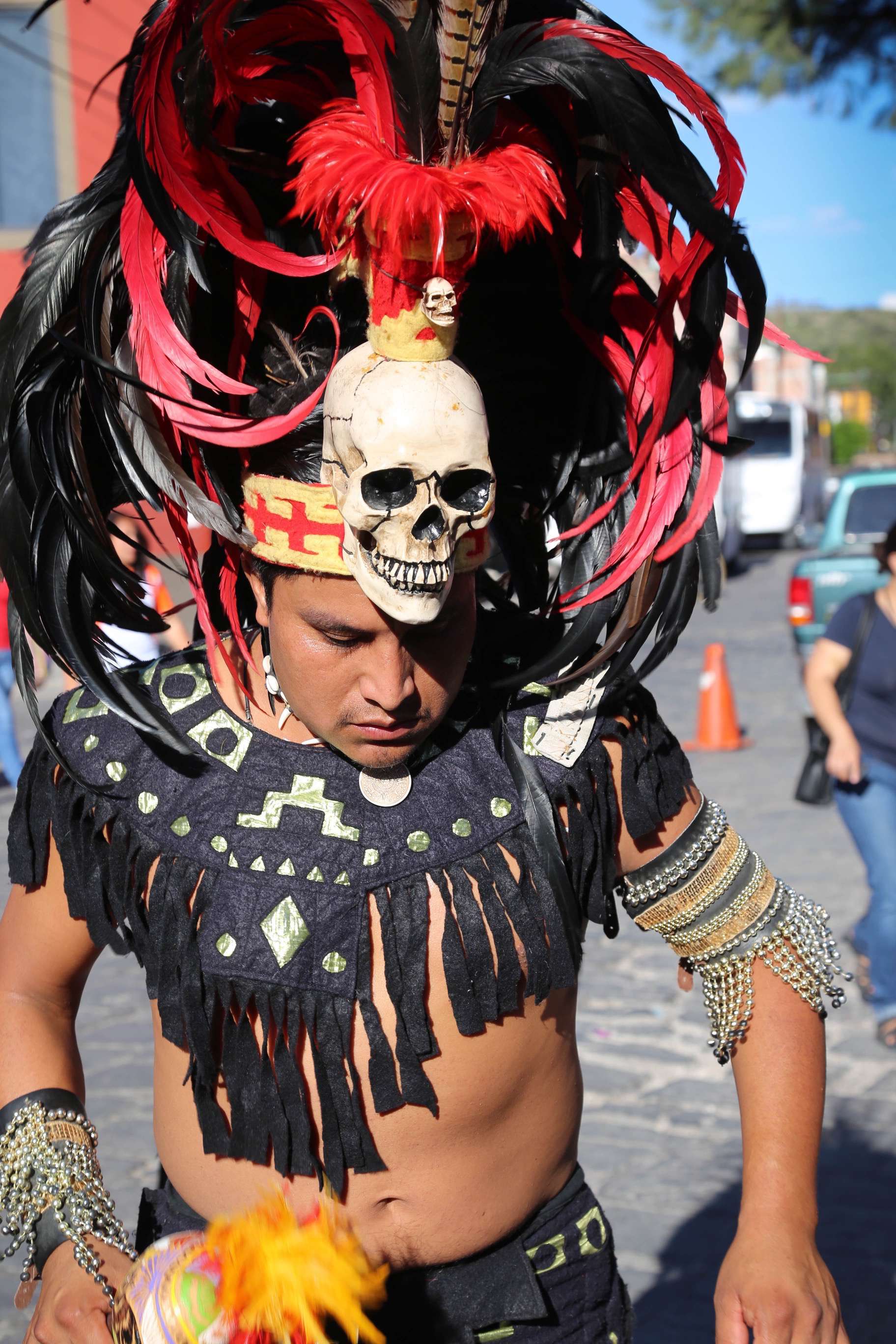 Masks mean a great deal and how they are worn is just a part of what they represent. 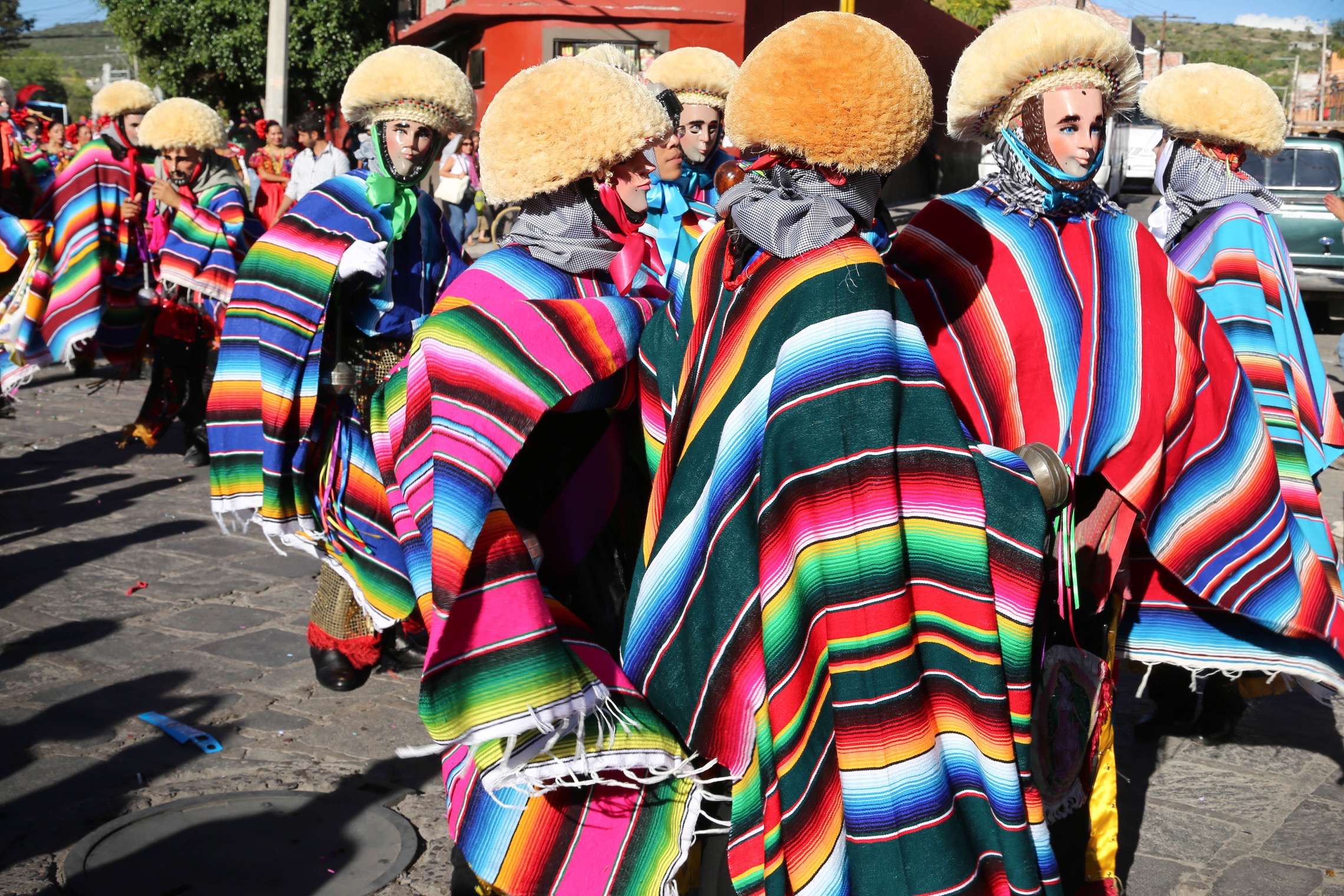 Some masks are more elaborately made than others, but still hold special meaning.

In the United States, parades are generally tightly choreographed events, often scheduled to the minute. As examples, the world-renowned Tournament of Roses parade, held in Pasadena, CA, or the Macy’s Thanksgiving Day Parade normally start and finish in a matter of hours. But in San Miguel de Allende, as in many place throughout Mexico, parades and fiestas can last all day and night, even stretching for days on end. 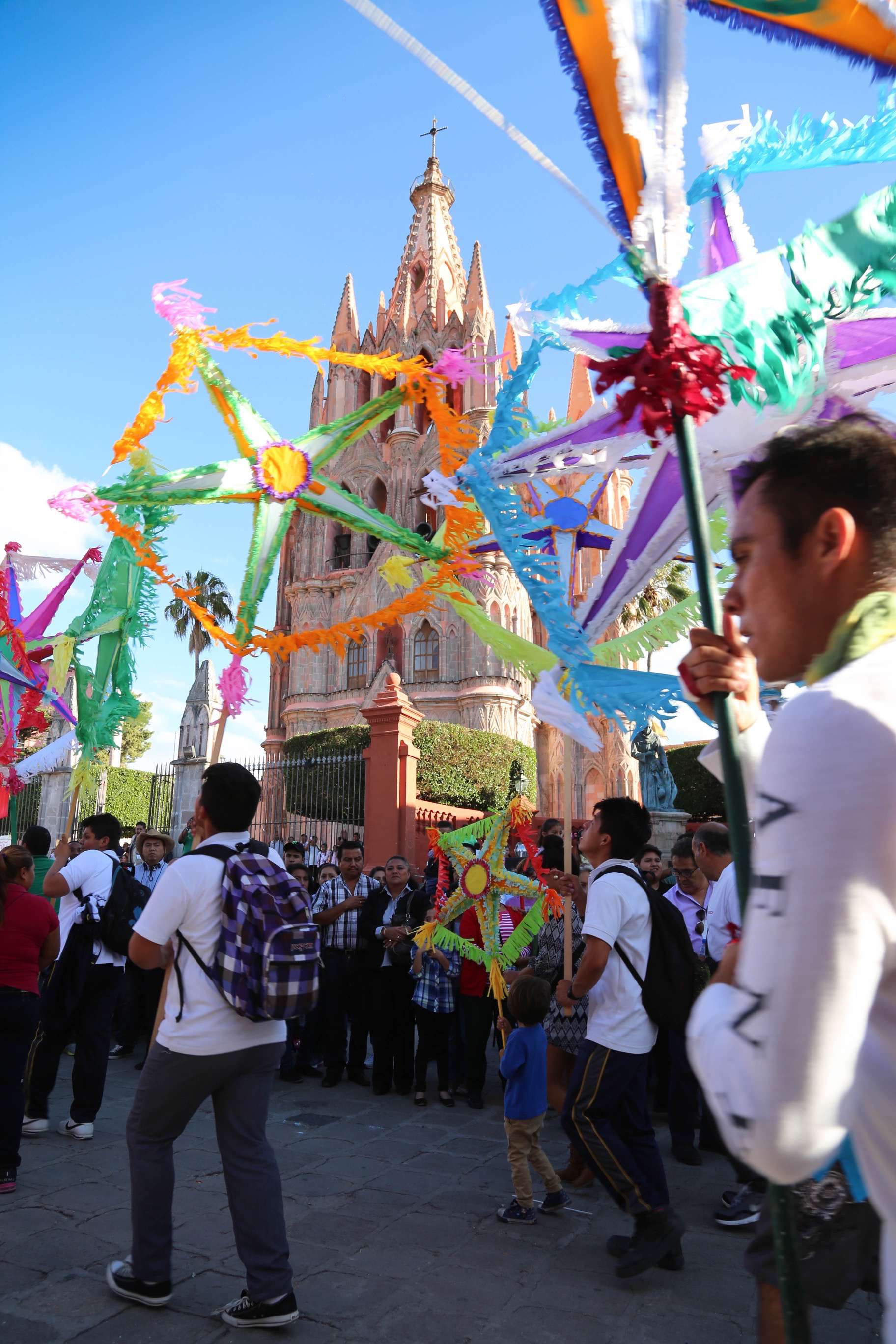 The parades in San Miguel de Allende may not be as tightly choreographed as in California or New York, but they make up for it in enthusiasm. 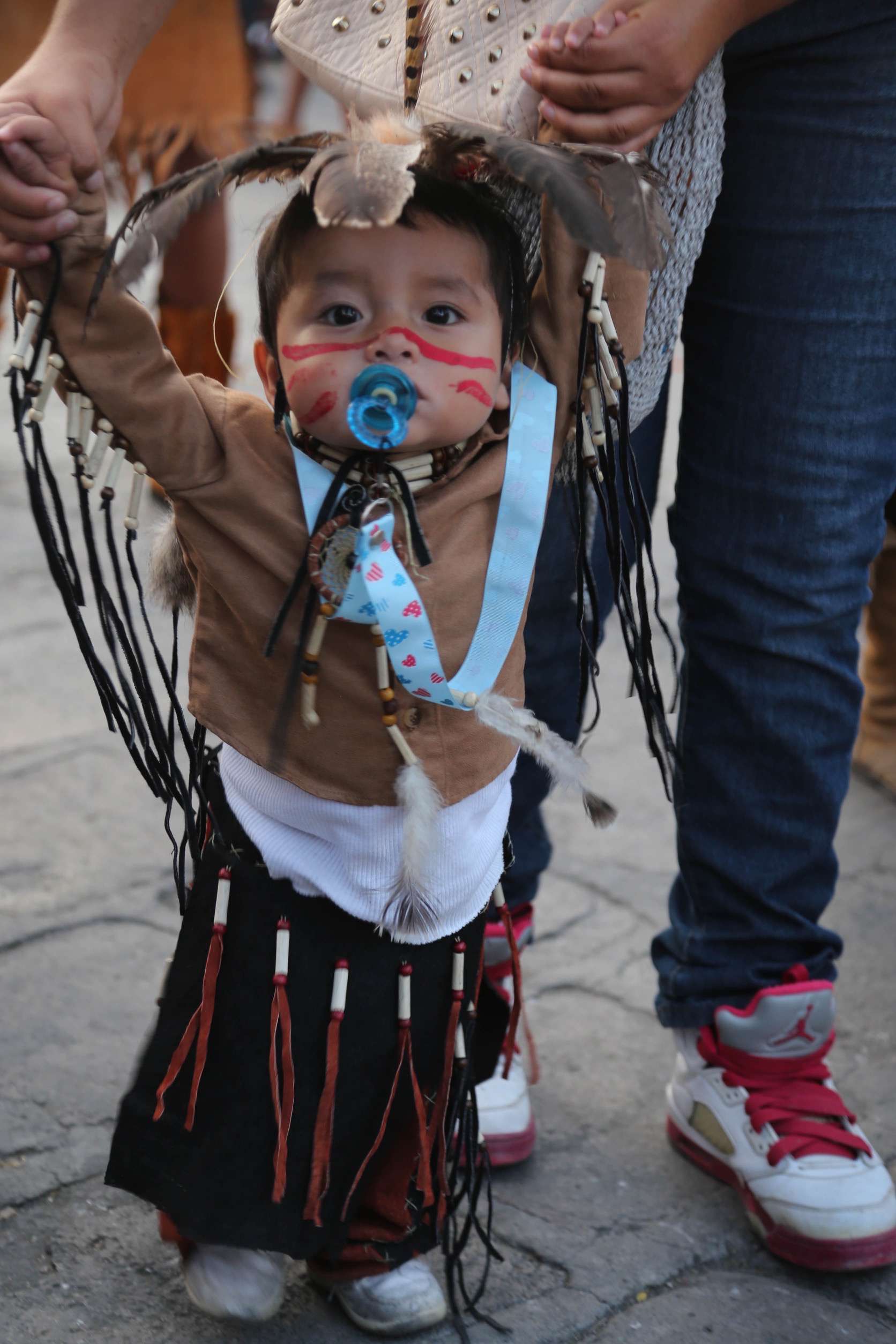 In San Miguel de Allende, even the very young participate in the parade. 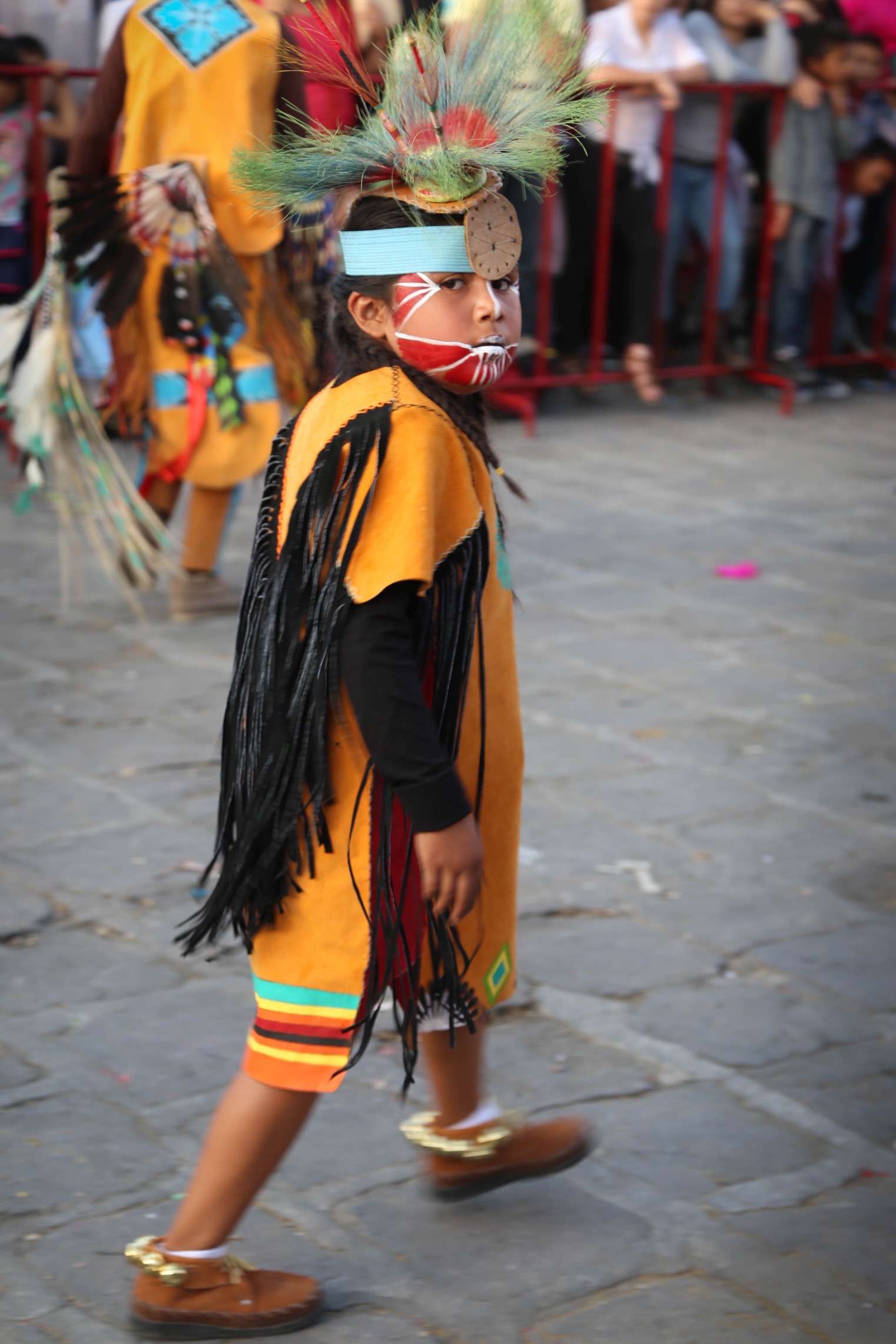 A young boy shows he is serious about being in the parade.

There is spontaneity to the parades and festivals in San Miguel de Allende. Groups of participants come in from different streets of the city, gathering and merging at El Jardin to pass in front of Parroquia de San Miguel Arcangel. Pious and partier gather side by side to participate and witness the events. 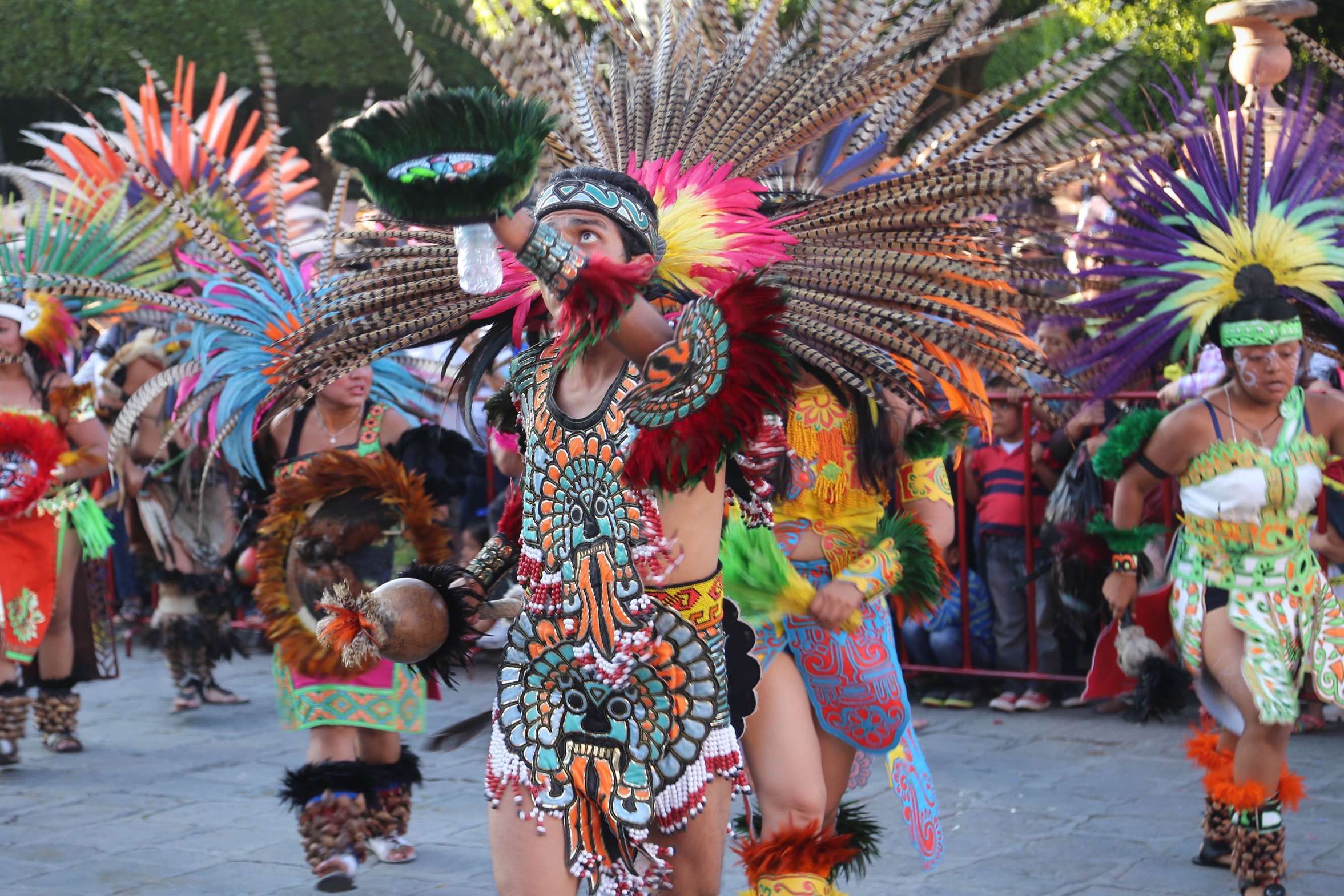 As the parade processes by El Parroquia in the main square, many pause to acknowledge the church, as shown by this dancer. 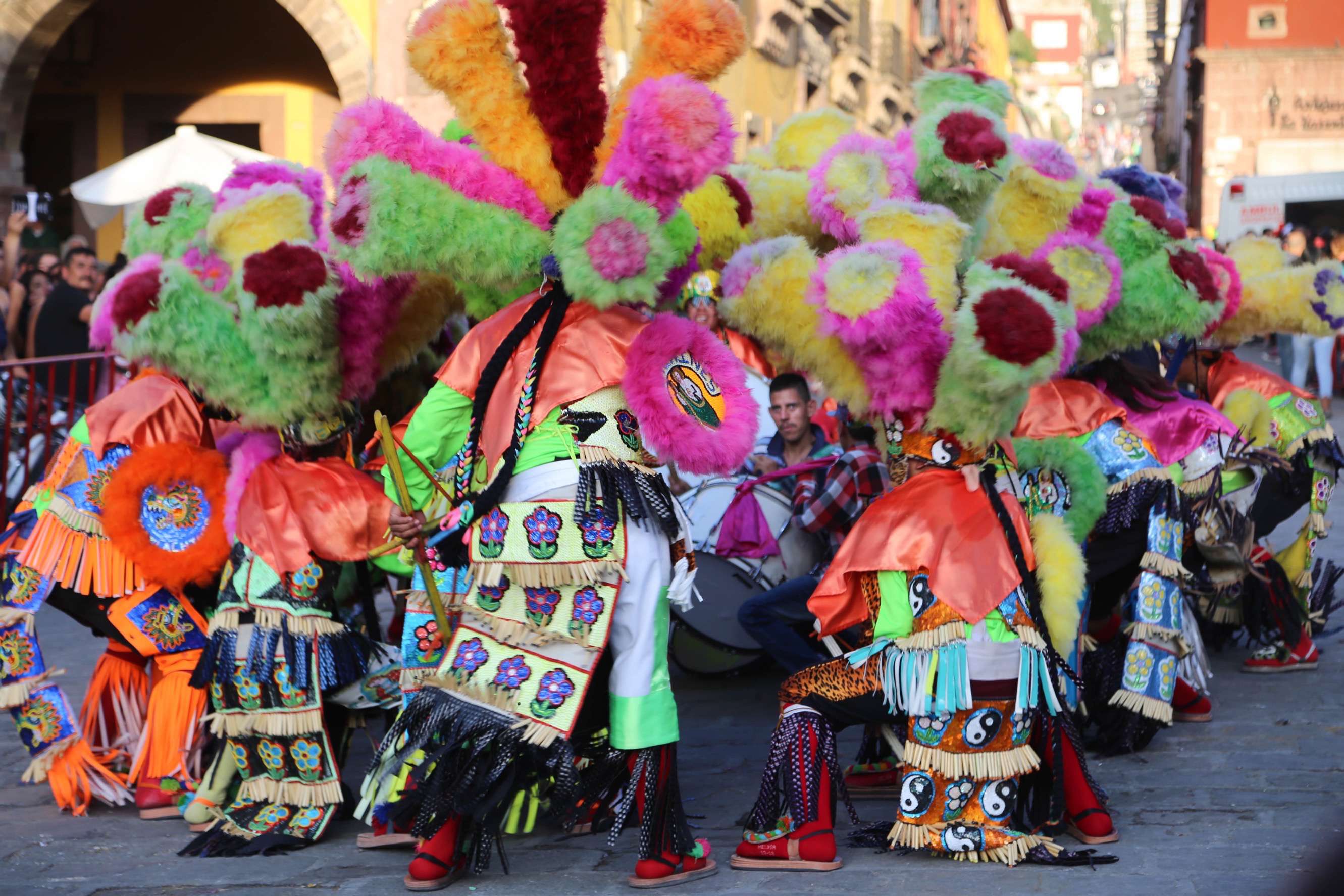 This group gathers around the drummer, center right, as they dance to the delight of the crowds. 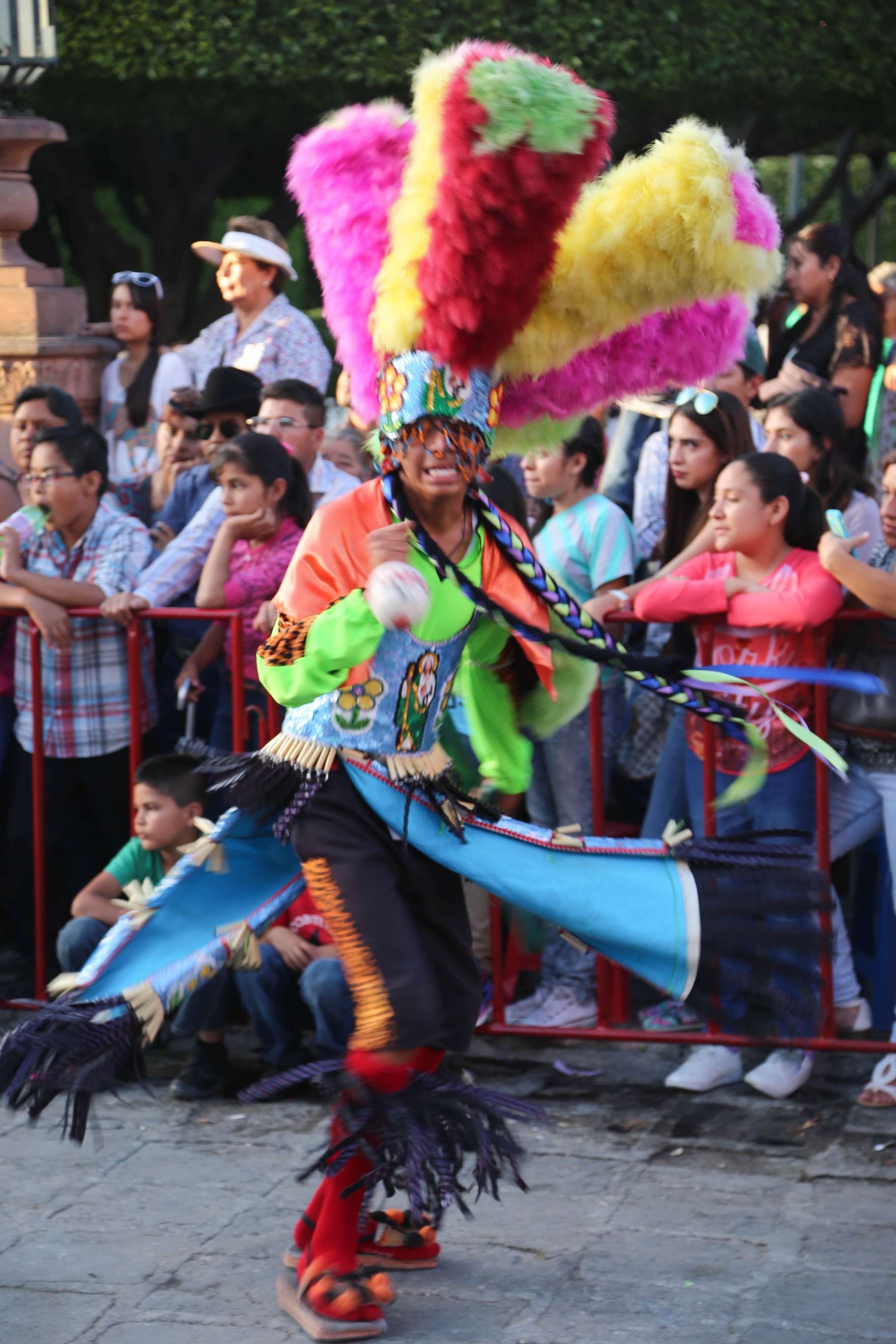 Imagine wearing these outfits for the better part of a day and dancing nearly every step of the way.

Take, for example, the hundreds of horses that end up gathered at El Jardin in early October. For this parade, their journey begins in late September in small towns and villages many miles from San Miguel de Allende. Riders gather up into groups that grow larger as the days progress. The caballeros stop along the way at churches for a blessing, a pronouncement of their faith and a chance to rest for a few moments before heading on. 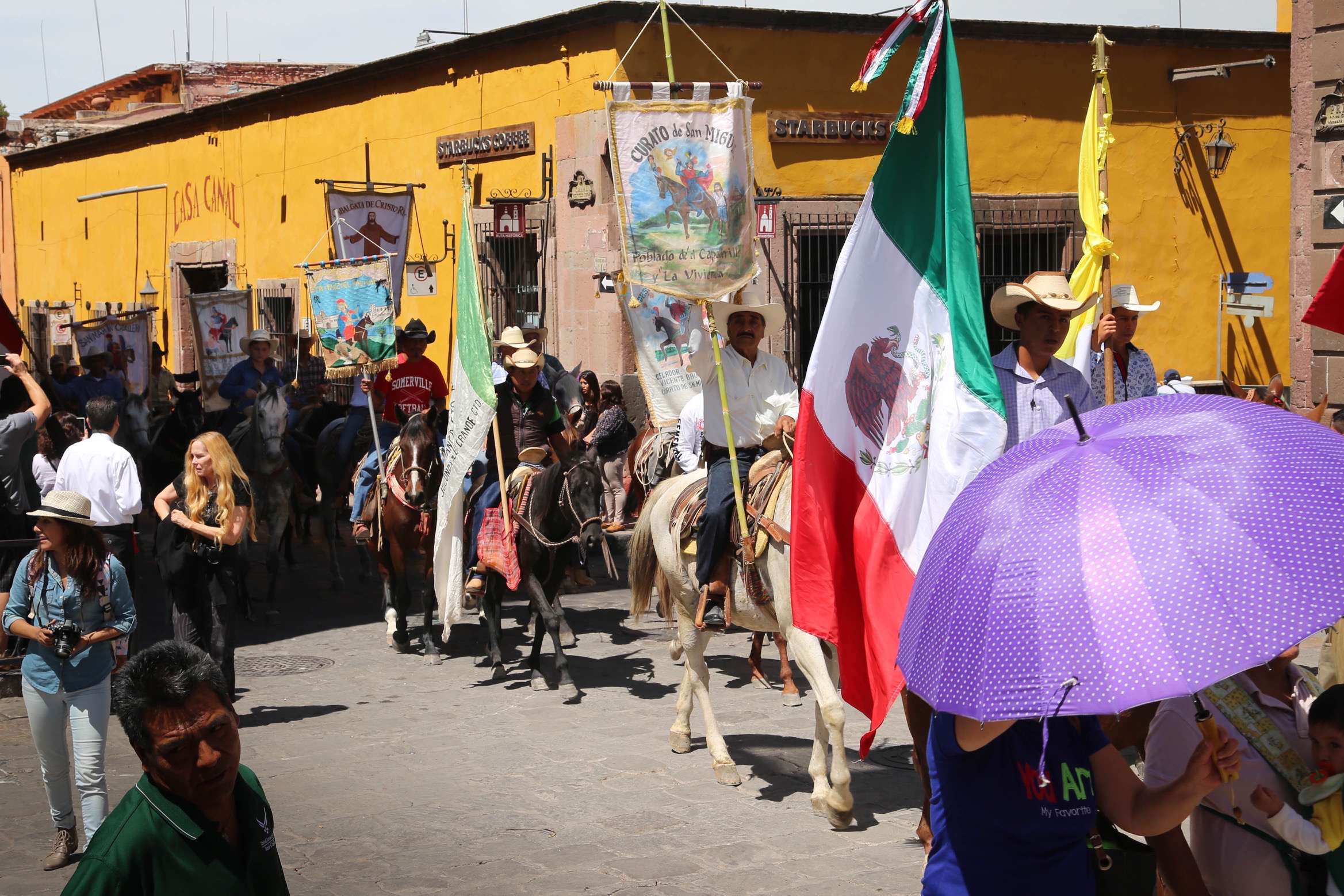 These riders spent days in the saddle on their way to San Miguel de Allende,  and they just kept riding on past the Starbucks. 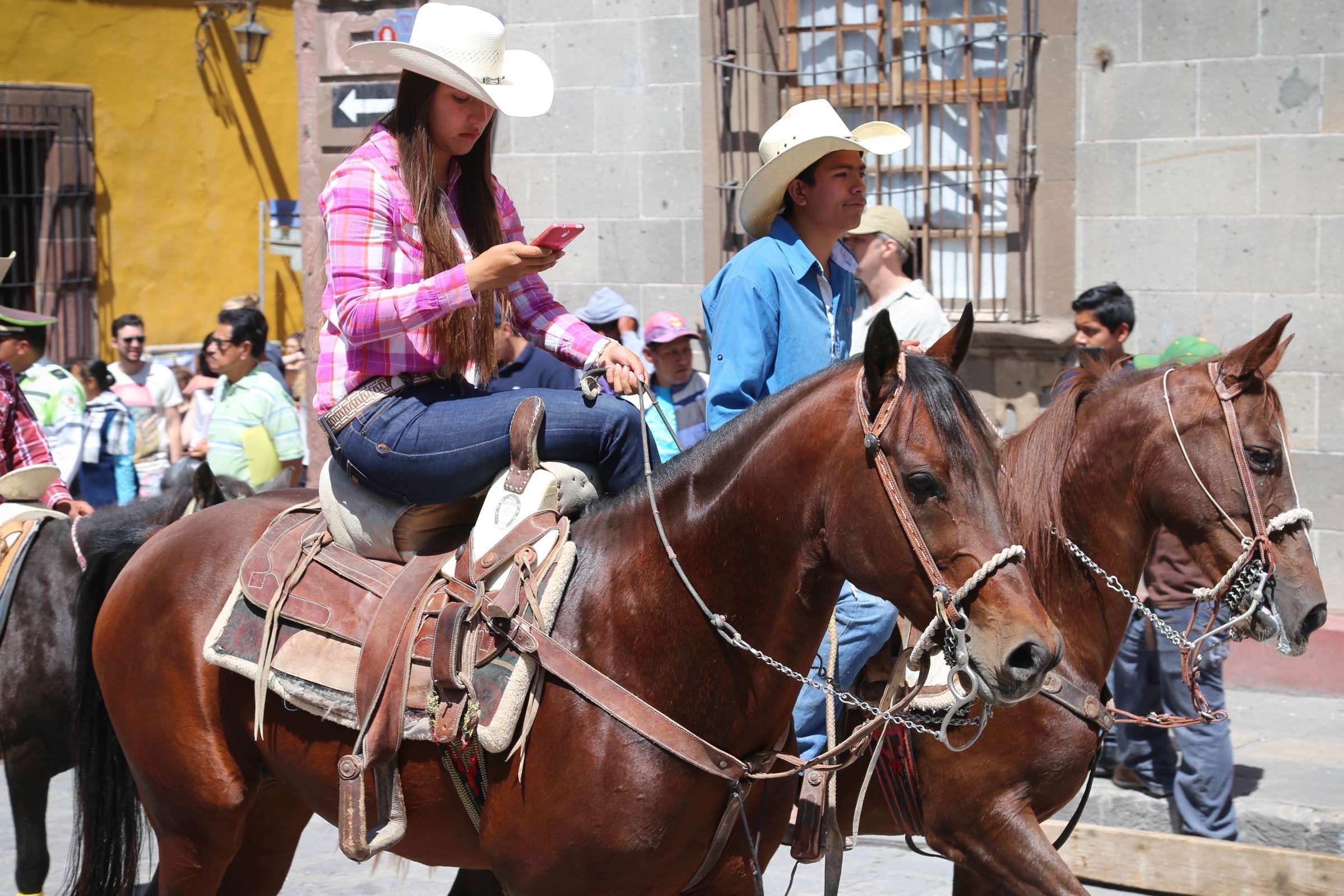 No matter where you are in today’s world, young people have an urge to check their phones. 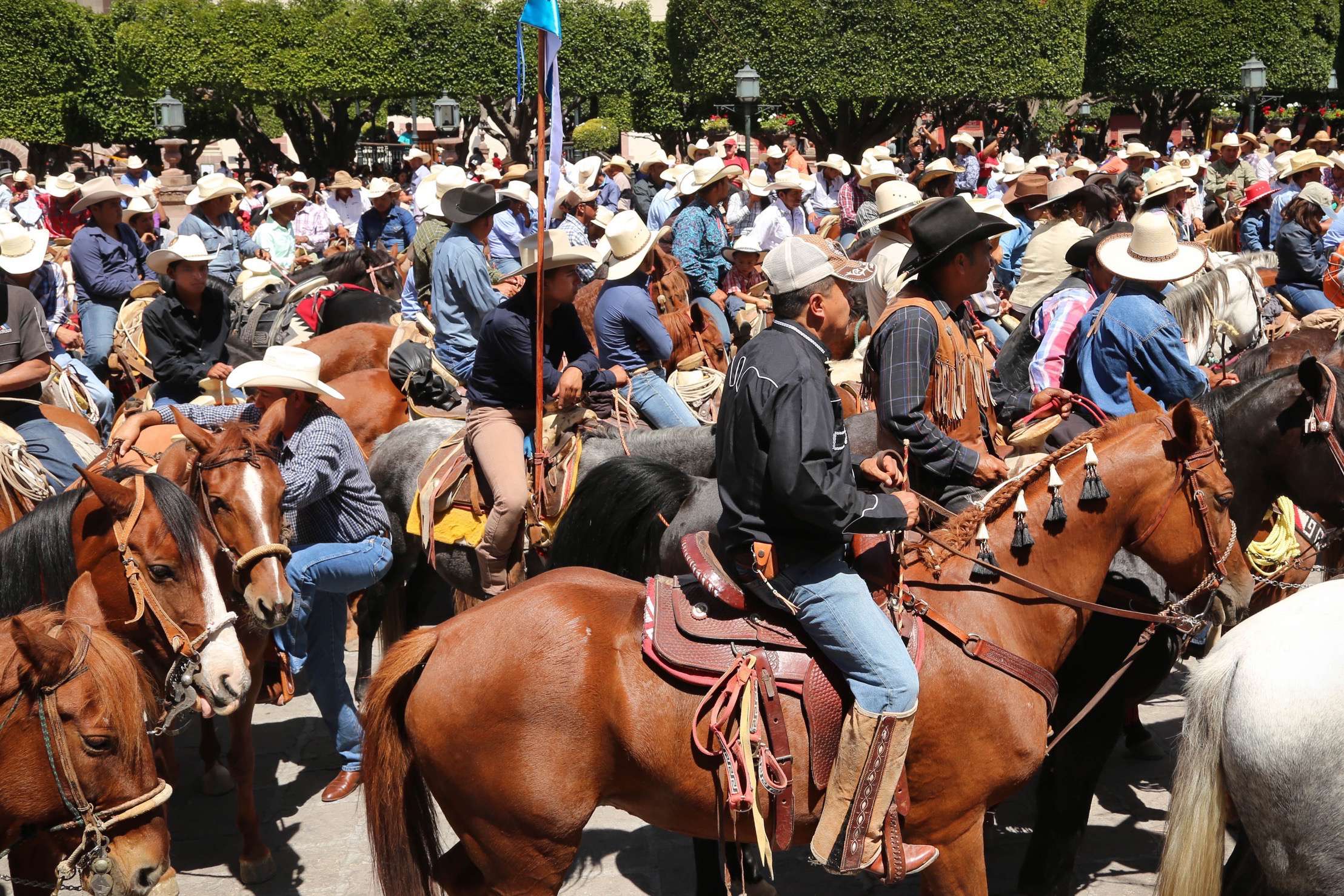 Hundreds of horse riders pack into the square and participate in a mass in front of the church. 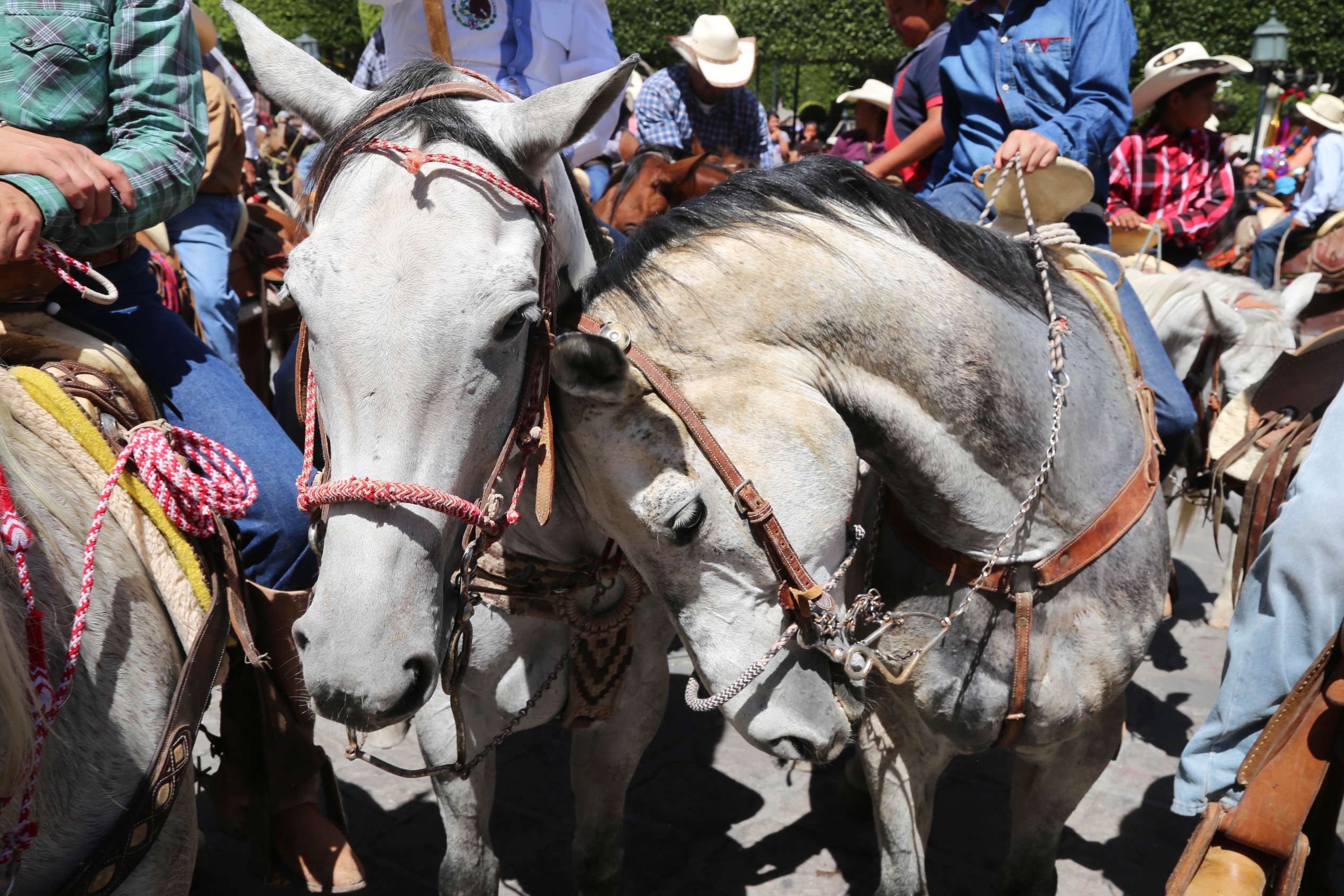 Even though they are crowded together in the square, the horses remain calm. 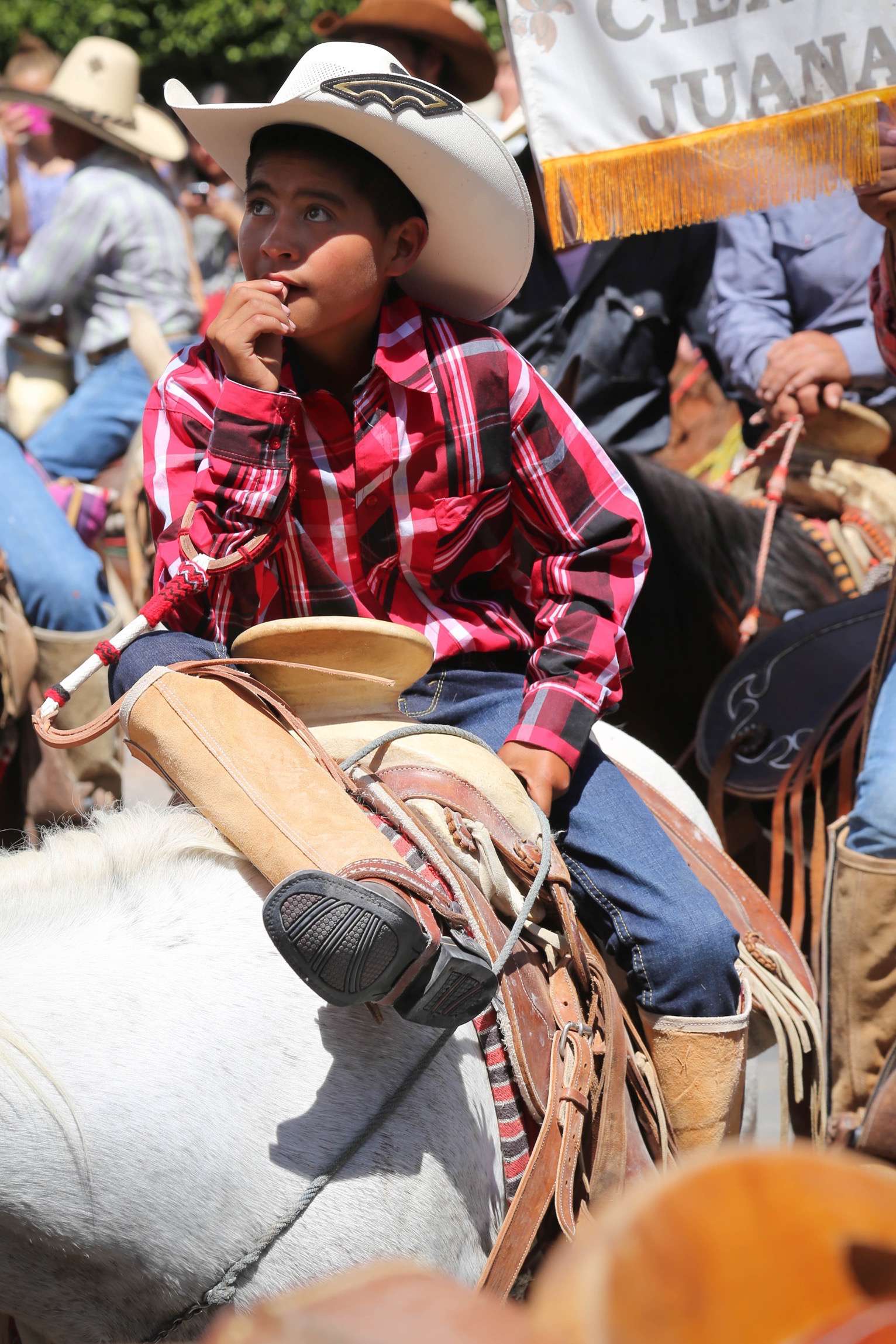 A young rider listens during the mass in the square at San Miguel de Allende. 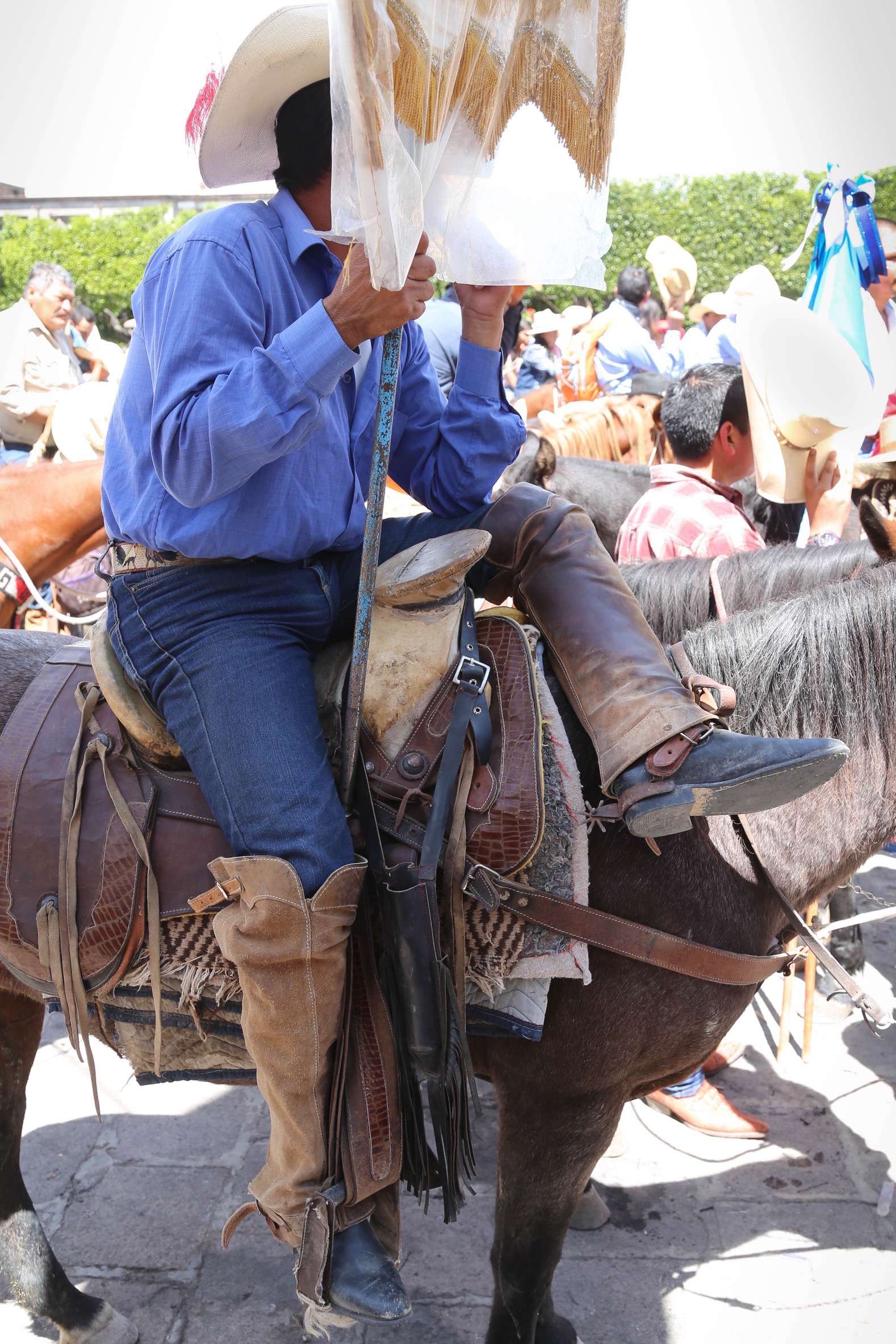 A ride of several days or more calls for apparel that will stand up to the rigors of the trail.

The riders arrive on October 3, La Alborada, San Miguel Arcangel’s birthday. Riders stream in, their horses quieted and tired from the long ride as they fill El Jardin. Then they sit in the open sun and participate in a full mass in front of the Parroquia. At the conclusion of mass, they quietly file out of the square and head back to their homes. 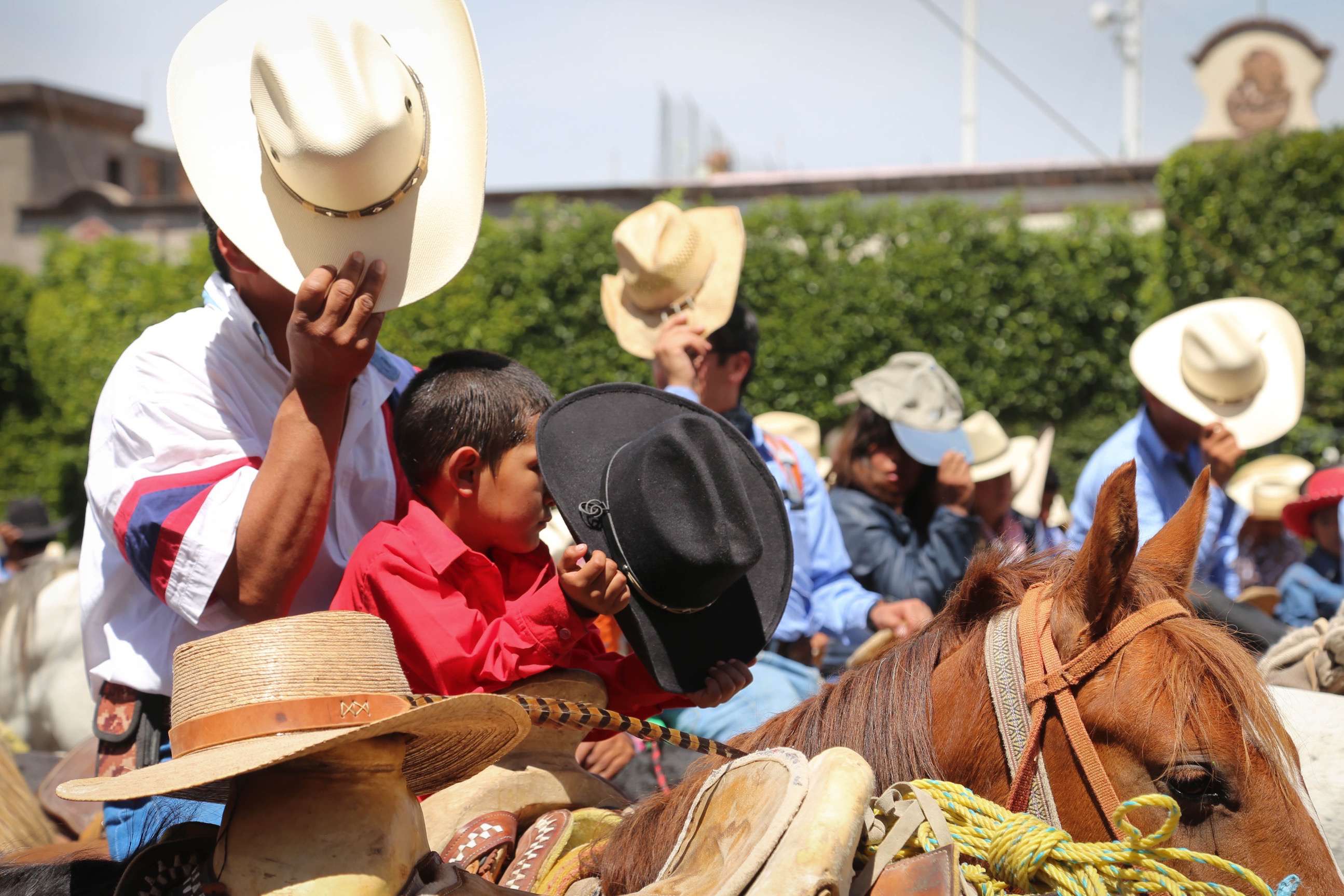 Young and old alike doff their hats out of respect during part of the mass.

Groups of pious Catholic faithful carry Xuchiles (zoo-chiles), huge hand-made floral wreaths that are set up in front of the church, bearing their offerings on their shoulders as they carry them through the streets. 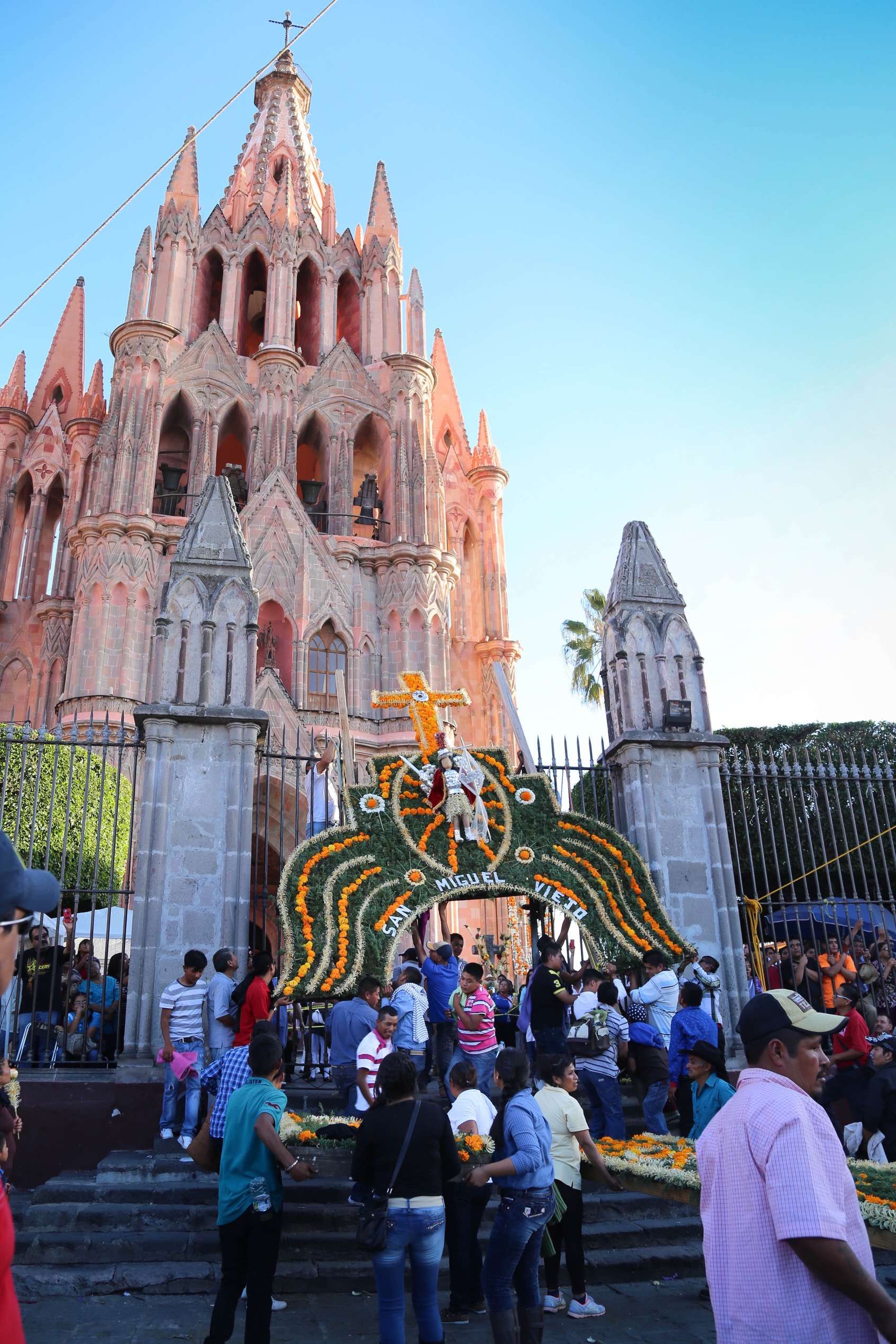 The huge floral arrangements are carried by teams who have spent many hours creating their offerings. This one will grace the entry gate to the church.

Whether young or old, parade participants are colorful, often loud, and represent many aspects of Mexico’s culture. Costumes can be quite elaborate. Groups representing towns and indigenous people gather at different points on the edge of town and move toward El Jardin as they put on their best displays of showmanship, dance and fireworks. Masks are a big part of many costumes and come in all sorts of designs, from sublime to frightful. 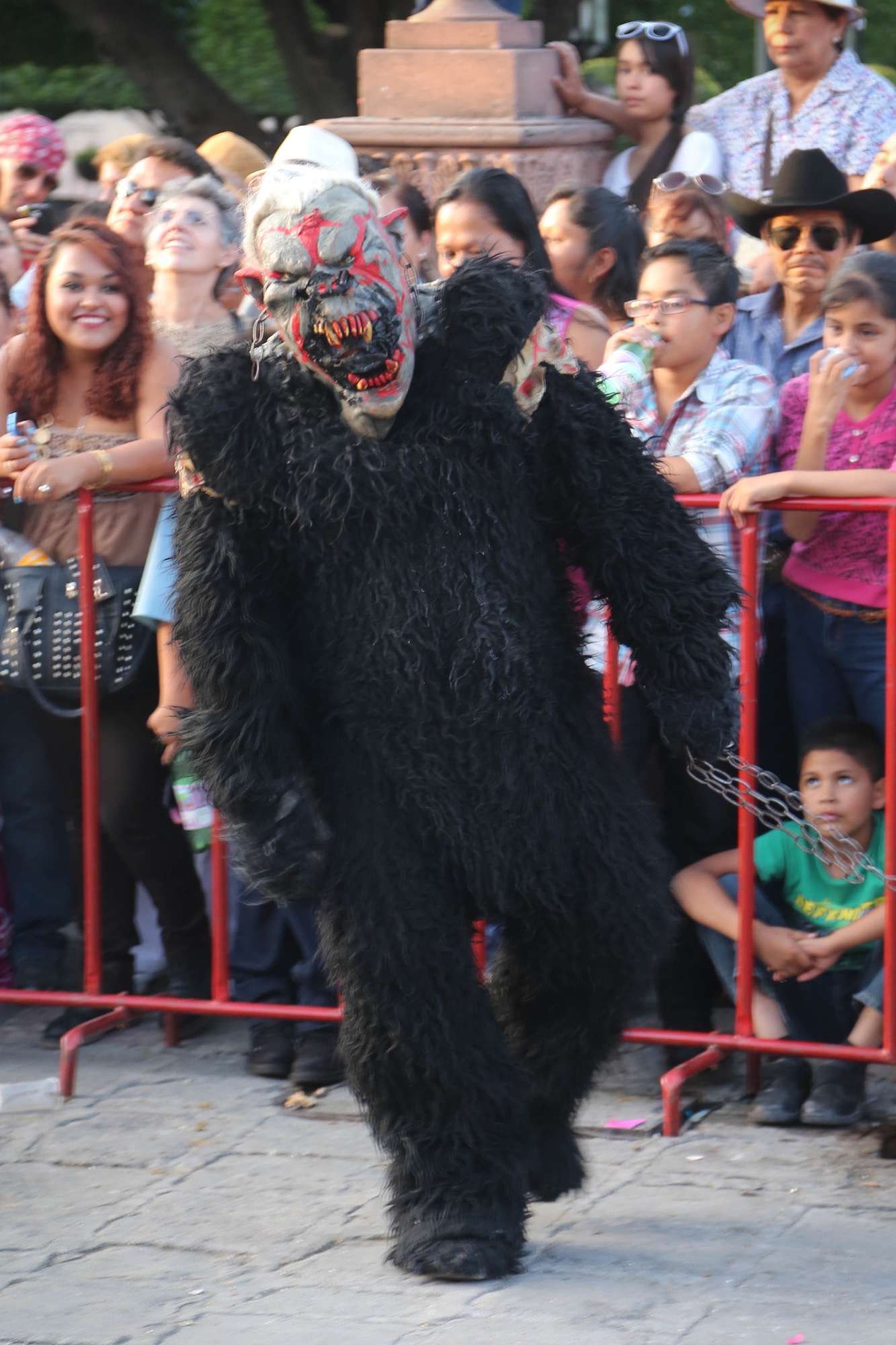 What may look frightening to some is seen by others as a source of delight.

A parade can last for days on end but dancers and those wearing costumes don’t seem to mind because in San Miguel de Allende, a parade is a celebration, and in Mexico, if you’re going to celebrate something, celebrate with style. 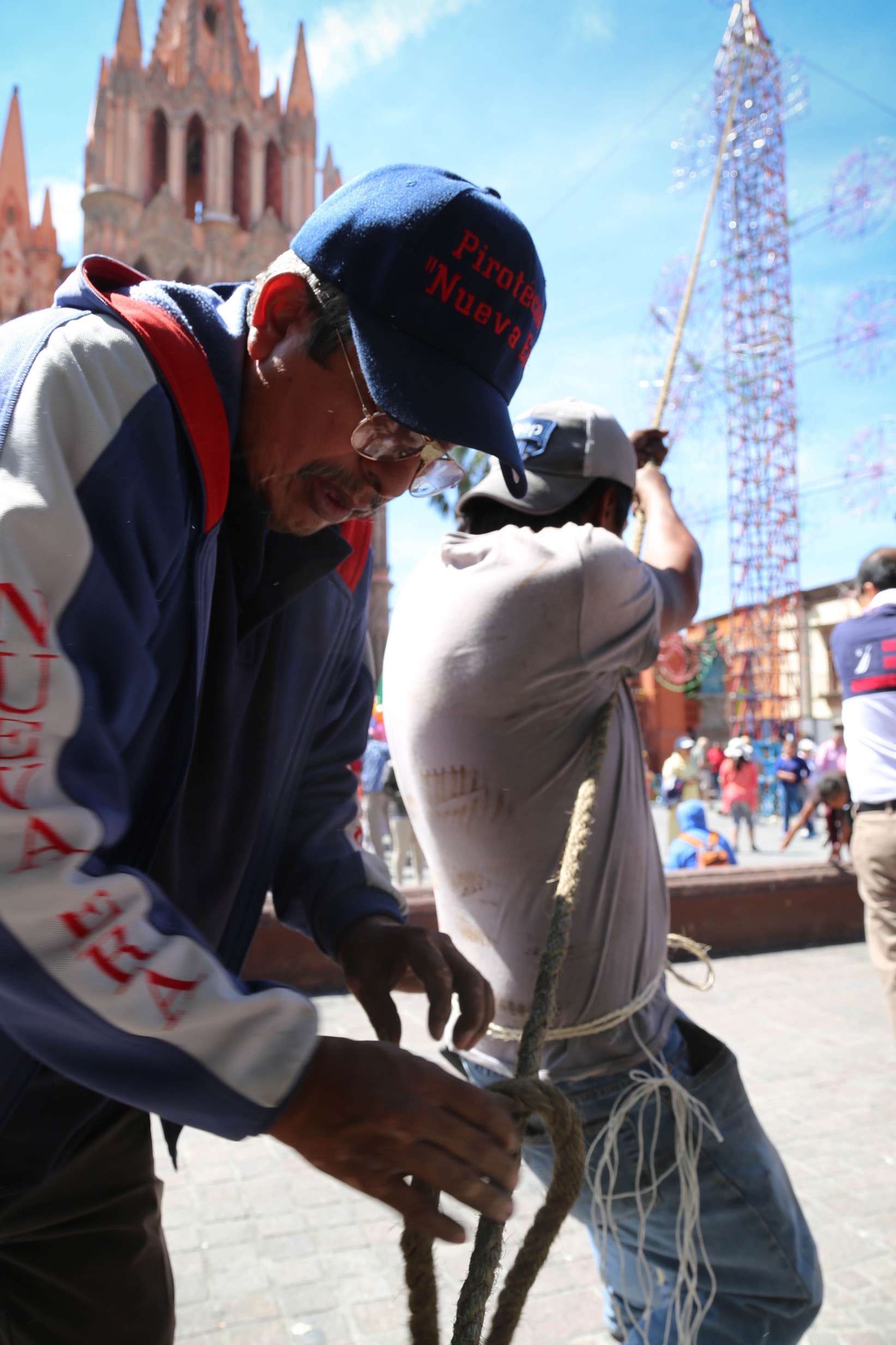 Crews spend time tightening the ropes of the fireworks stands. 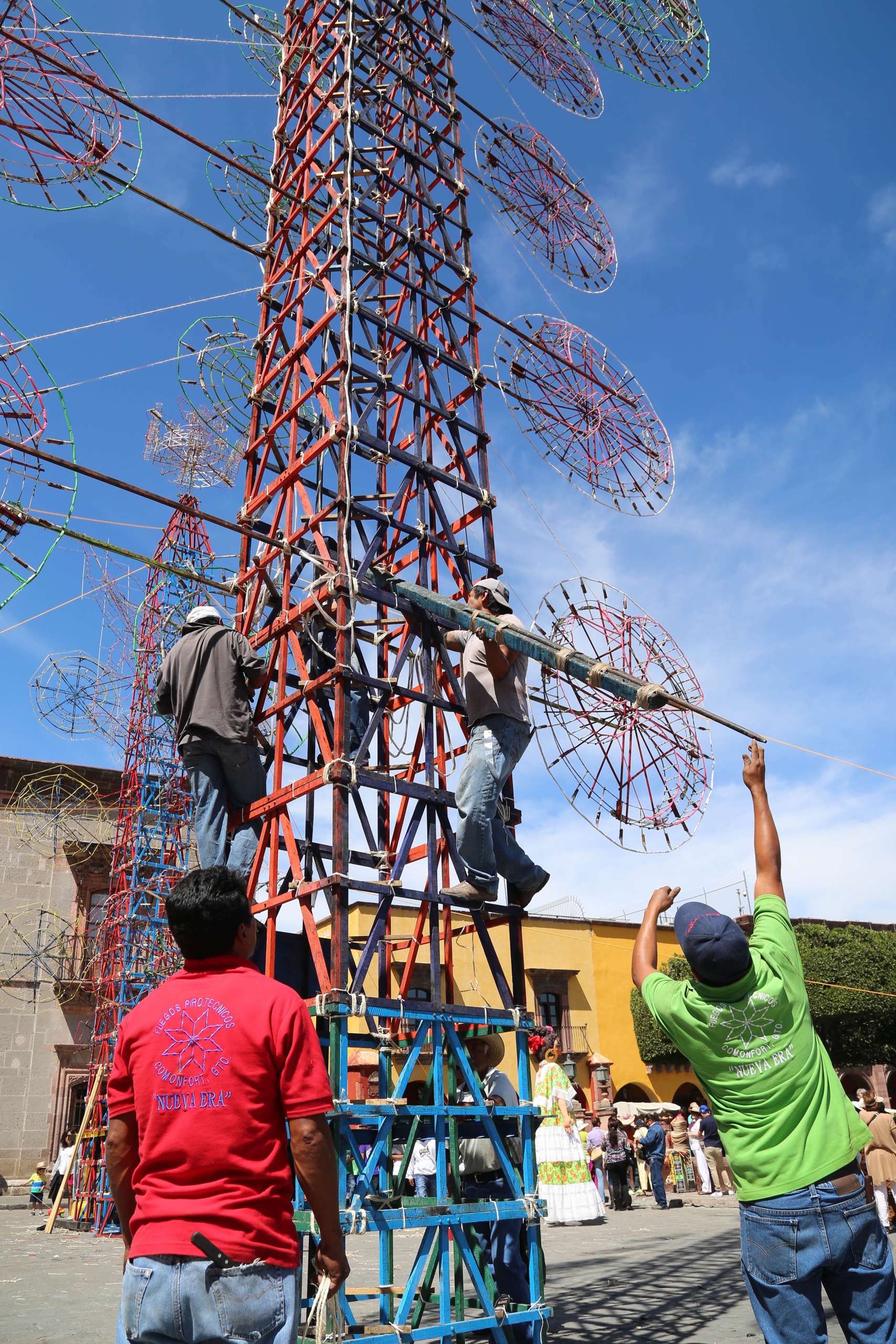 Assembled by hand, the fireworks stands will provide a dazzling light show in the evening. 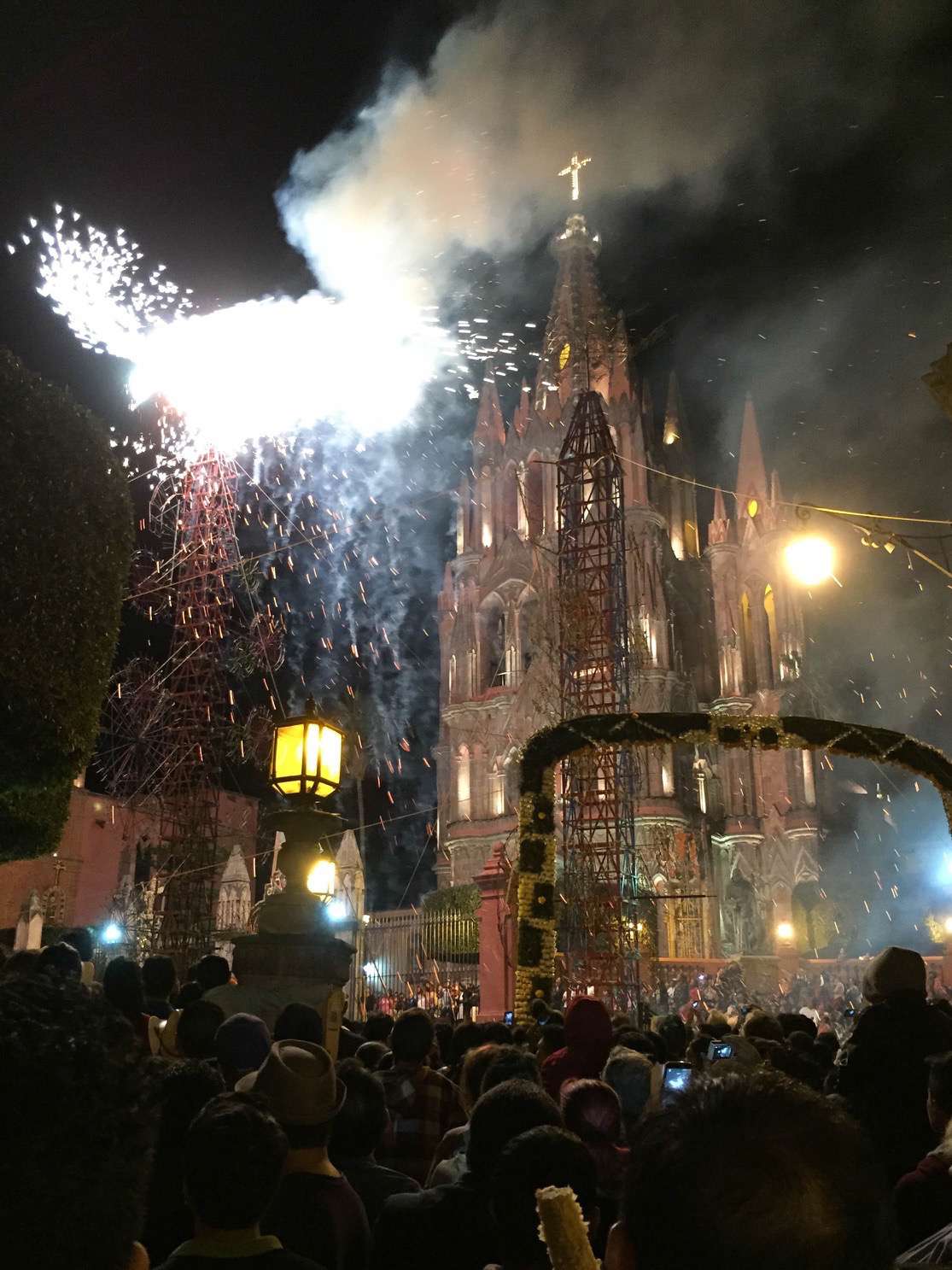 In San Miguel de Allende, fireworks are best viewed up close and the crowd is all the happier for it.