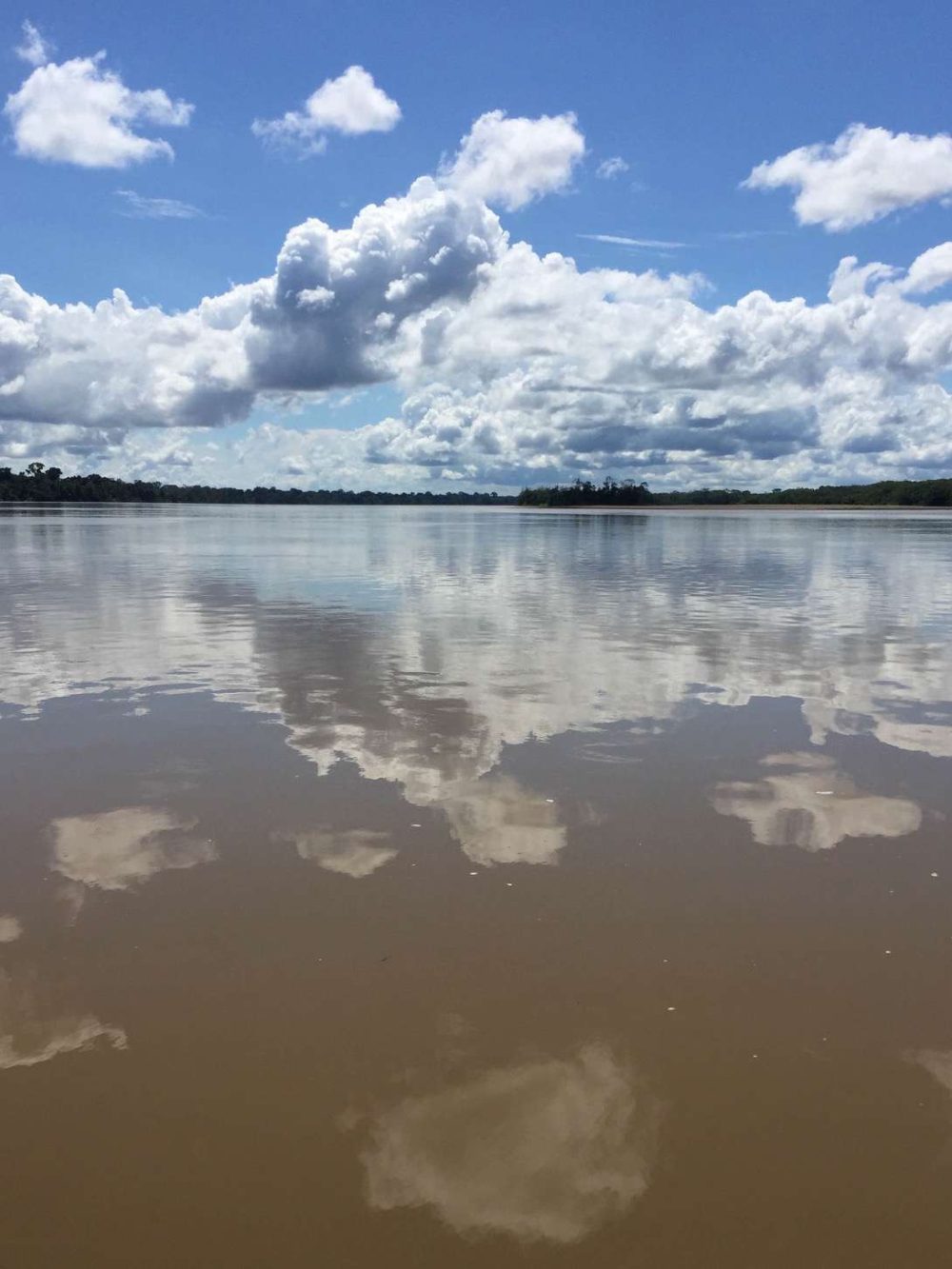 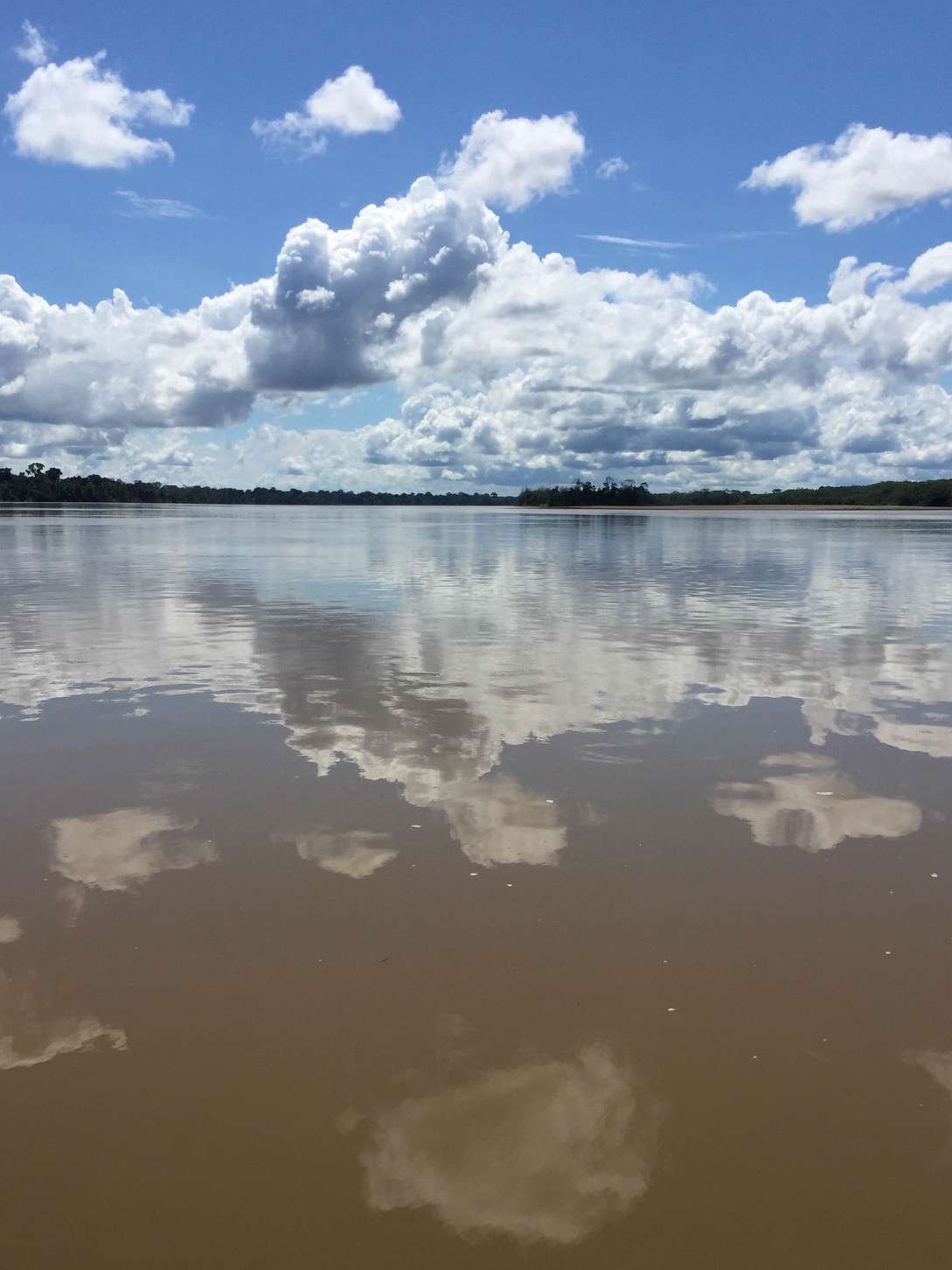 The immensity of the Amazon River must be experienced up close to truly appreciate its majesty. 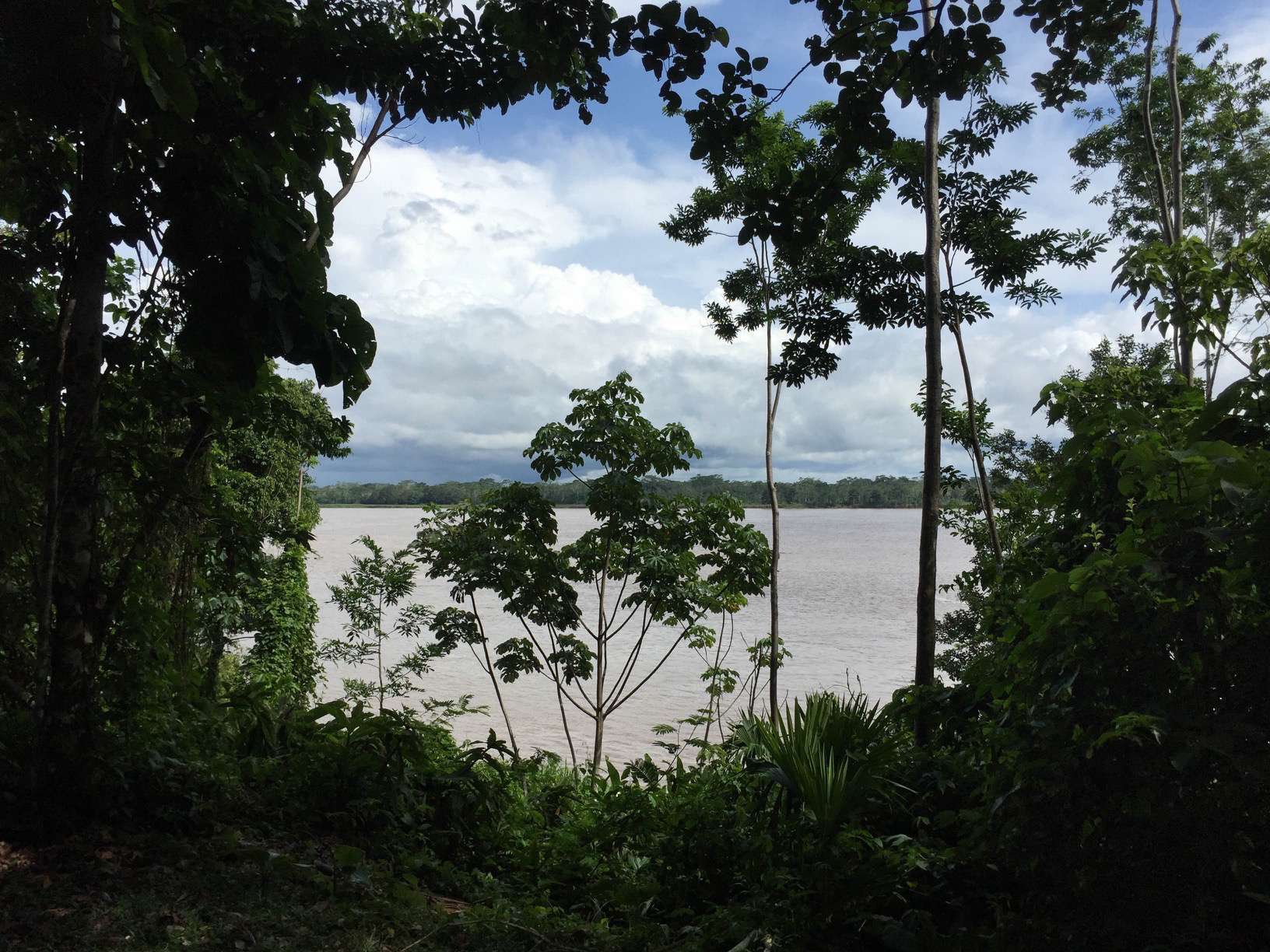 Once you step off the river boat the jungle takes over, swallowing up nearly everything.

Yes, some argue the Nile River is a bit longer in total length, but that fact too is in dispute. The Amazon River, with an average discharge of 55-million gallons per second, releases more water than the next seven-largest rivers in the world combined. The Amazon River discharges approximately 20 percent of the world’s total fresh water. The Amazon basin, at more than 2.7 million square miles, is nearly twice the size of the world’s second largest river (by water discharged), Africa’s Congo River basin. And the Amazon’s mouth stretches over 40 miles and pushes freshwater more over 100 miles into the Atlantic Ocean. To date, no bridge has been built across any portion of the Amazon River. 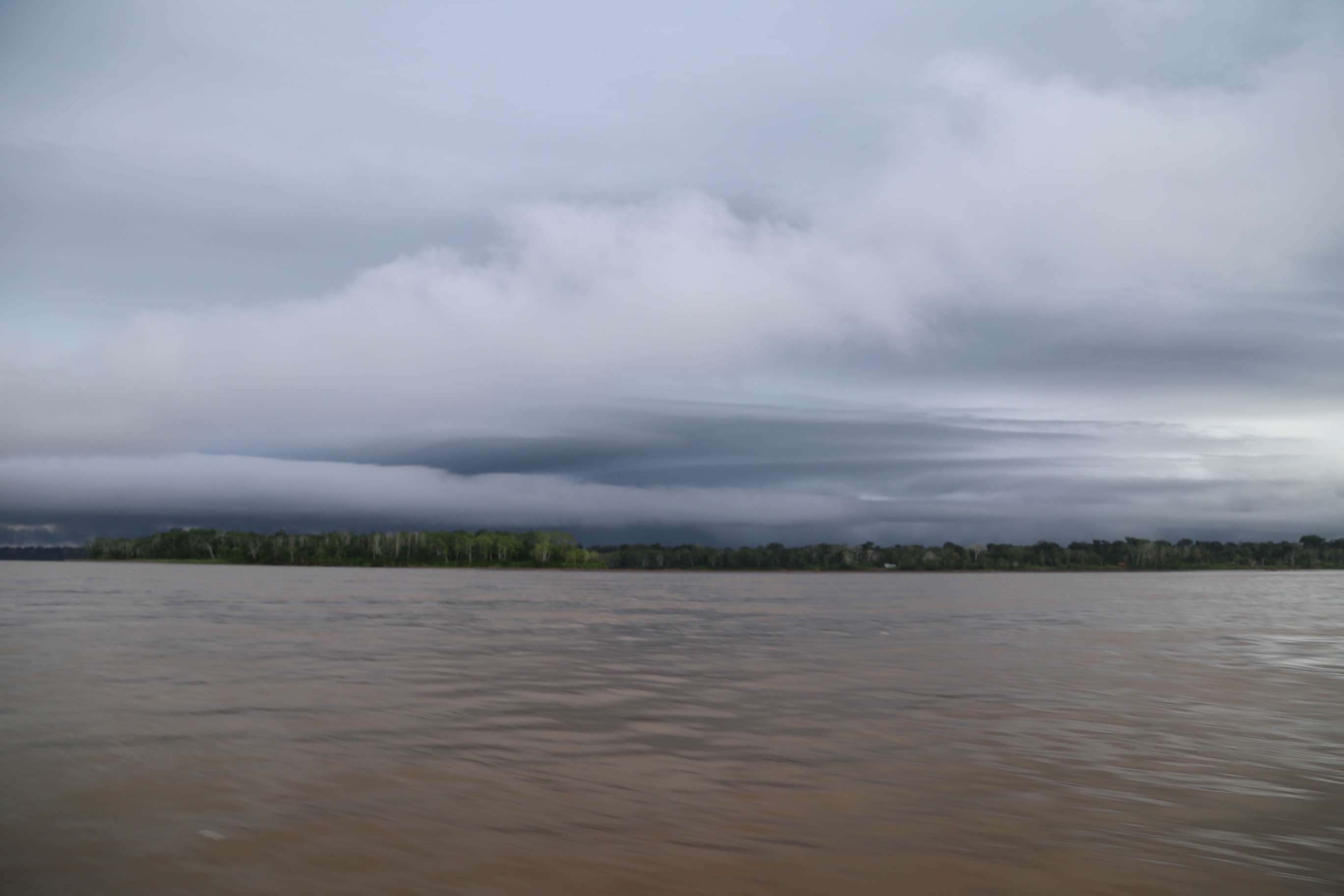 At least 80 inches of rain falls in the Amazon basin and in some areas over 400 inches inundates the land and river. 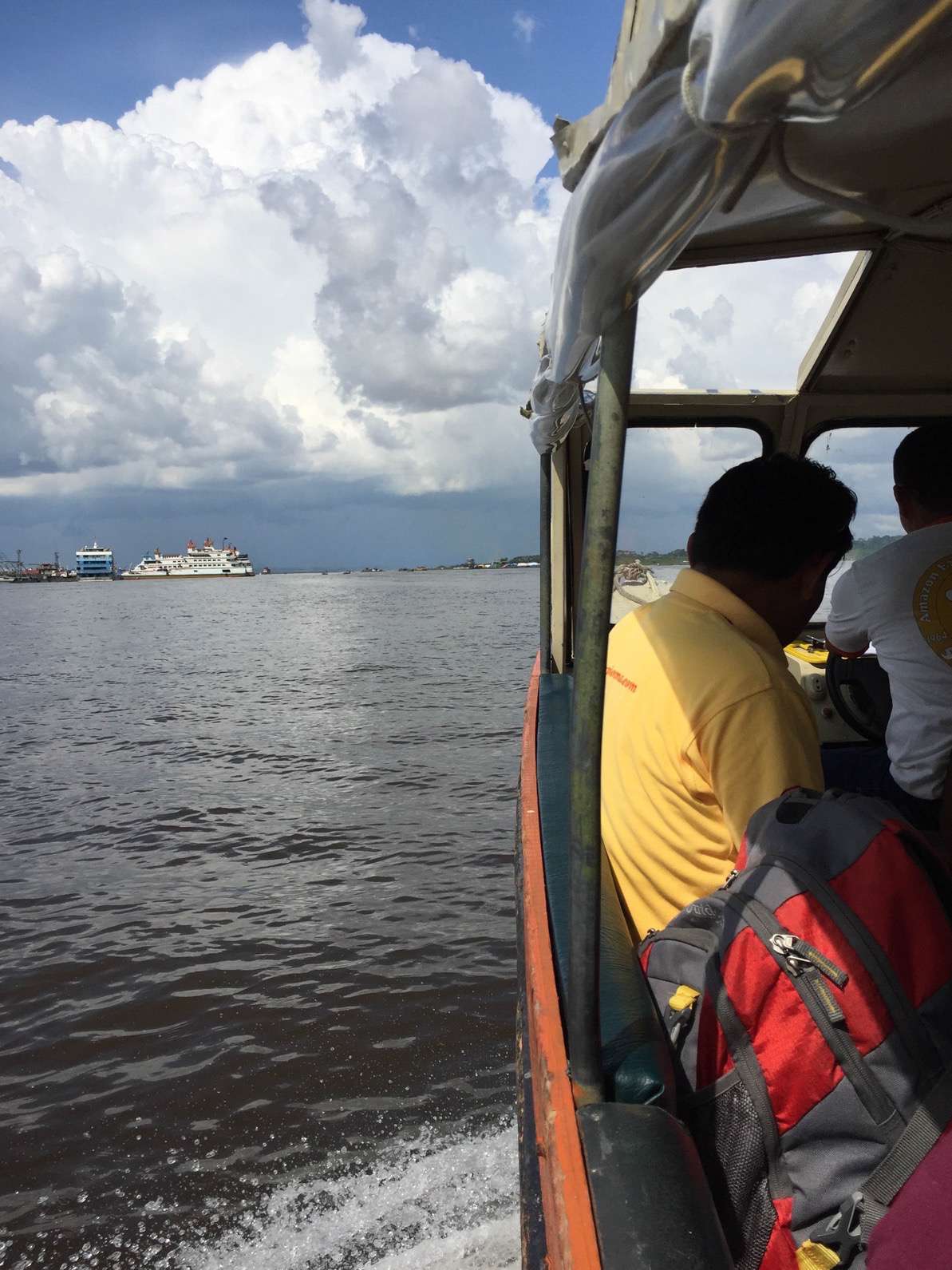 In a matter of minutes, this river boat will be in the middle of a heavy rainstorm. 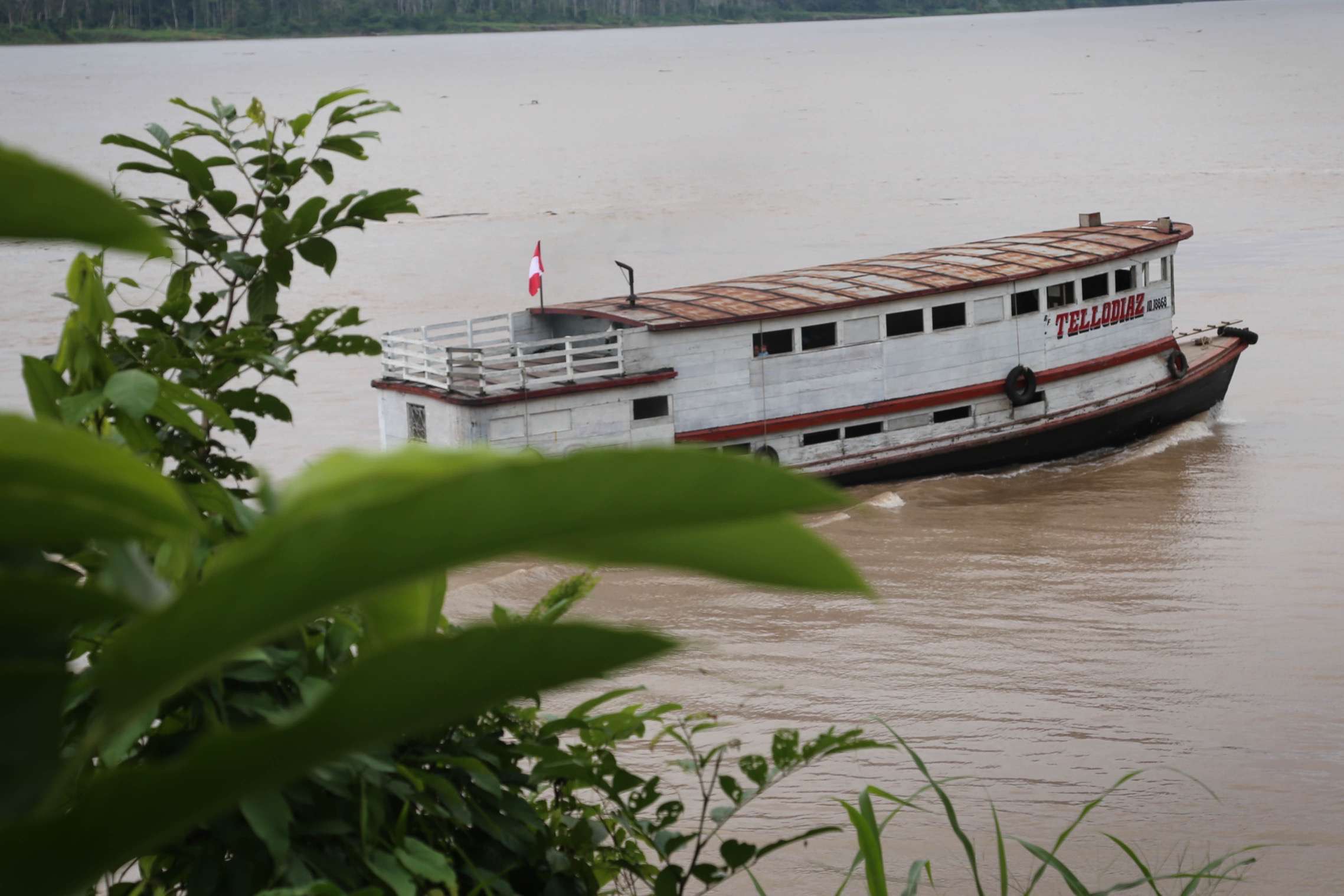 A water taxi plies the river, transporting people and cargo.

Aside from its gargantuan size, the Amazon also is one of earth’s great bioregions and home to approximately 10 percent of the world’s known biodiversity, including many flora and fauna that are classified as endangered. This place is a treasure trove for biomedicine. 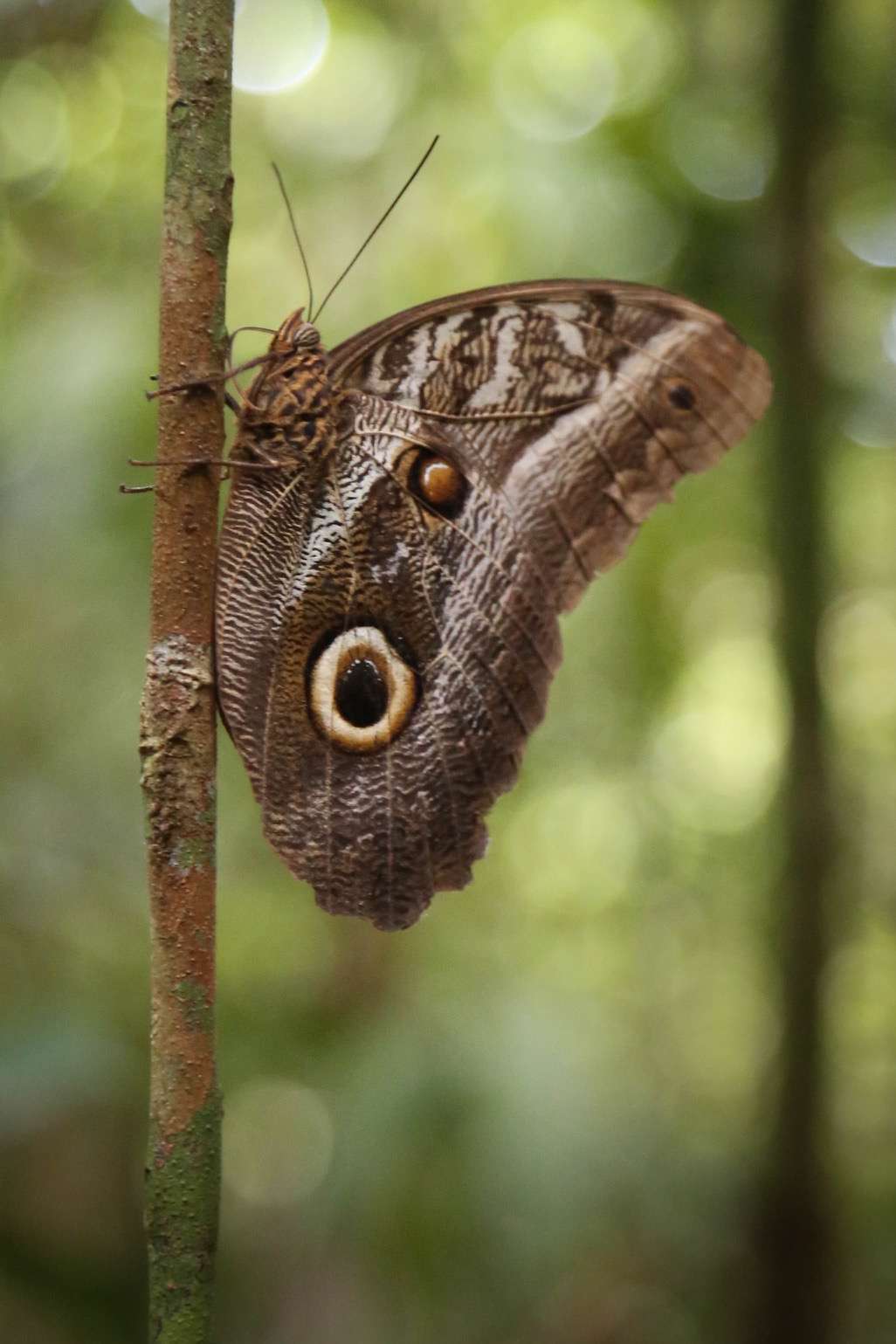 All sort of creatures can be seen in the Amazon jungle. All you need to know is where to look. 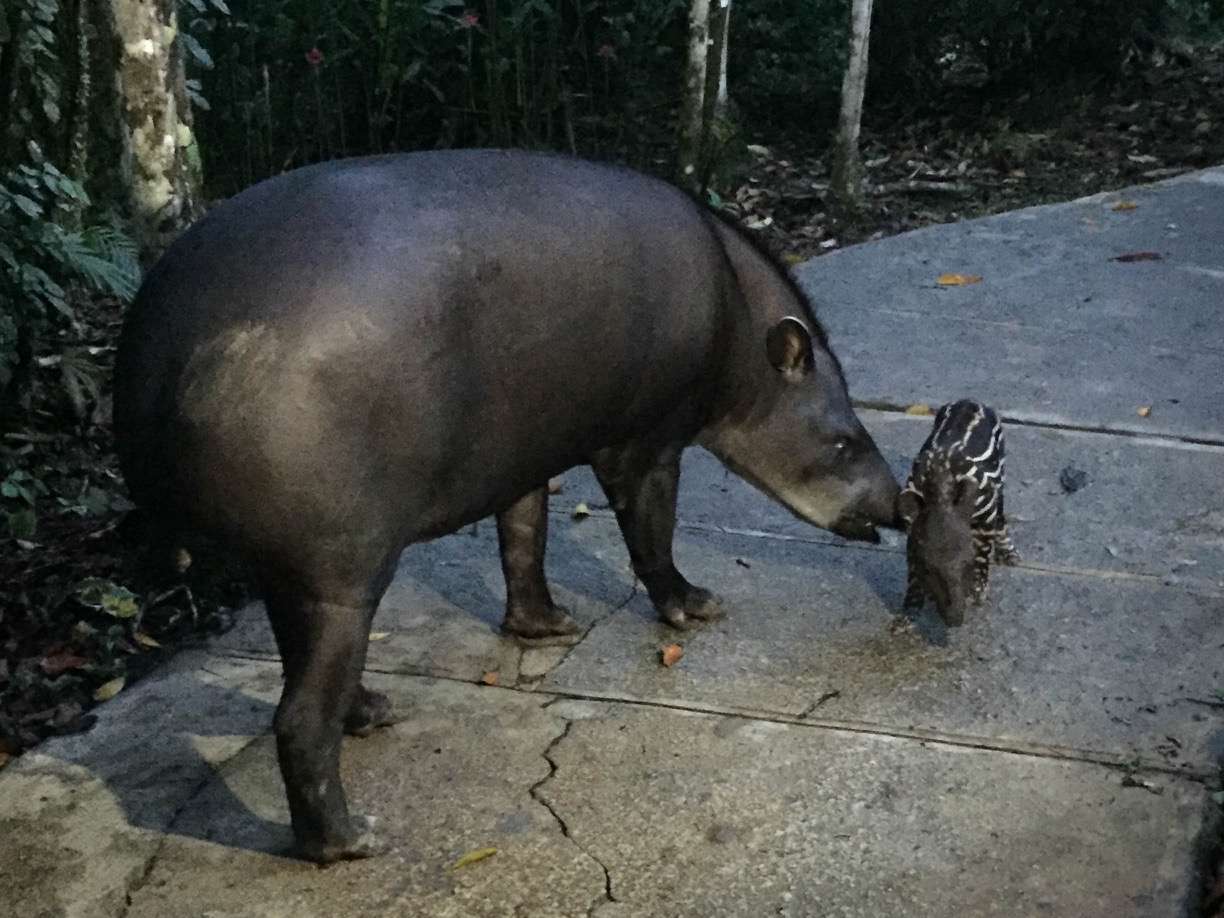 A mother tapir and her baby amble along undisturbed at an Amazon River lodge. 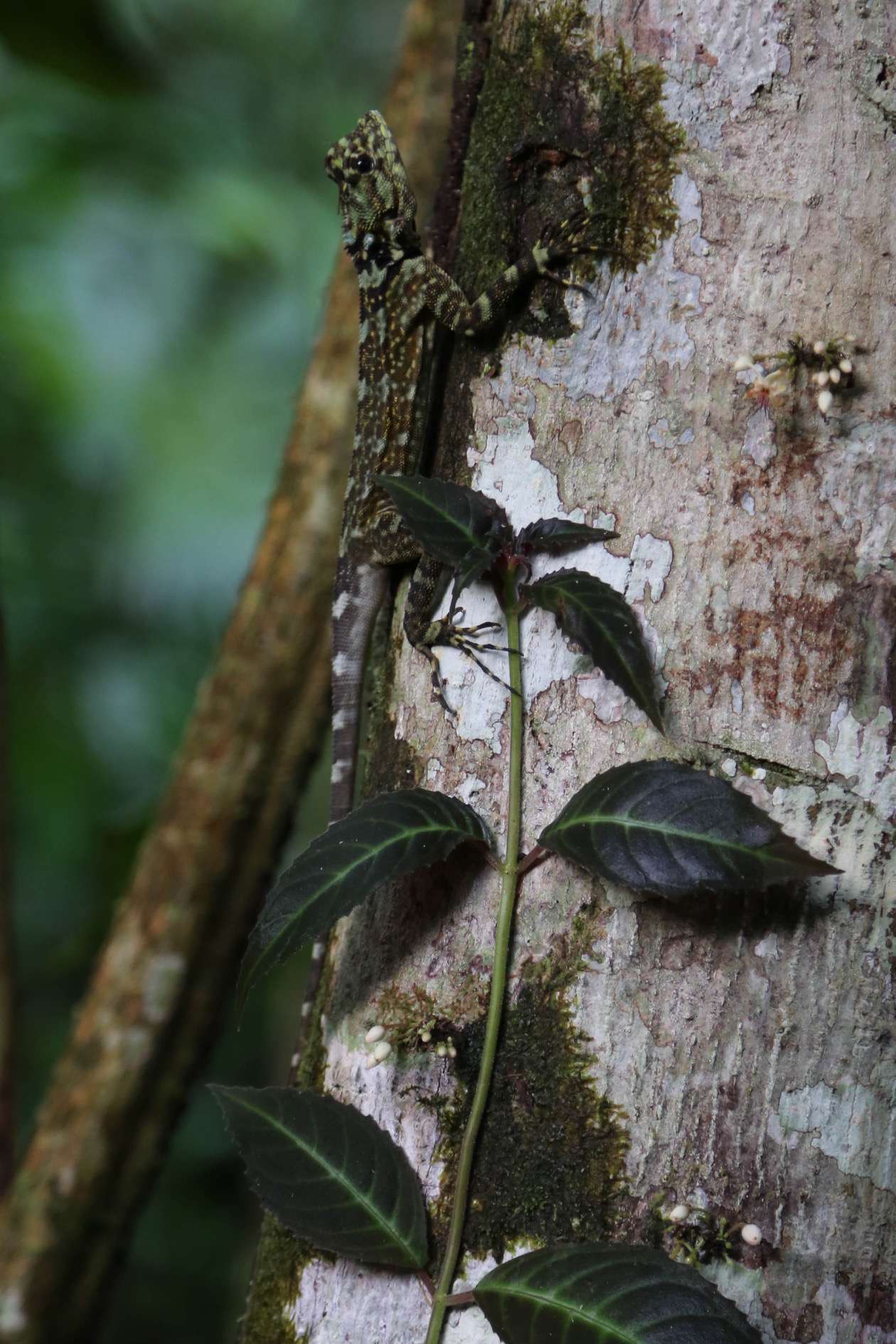 A sharp eye is what you need to see many of the creatures, like this lizard hugging a tree. 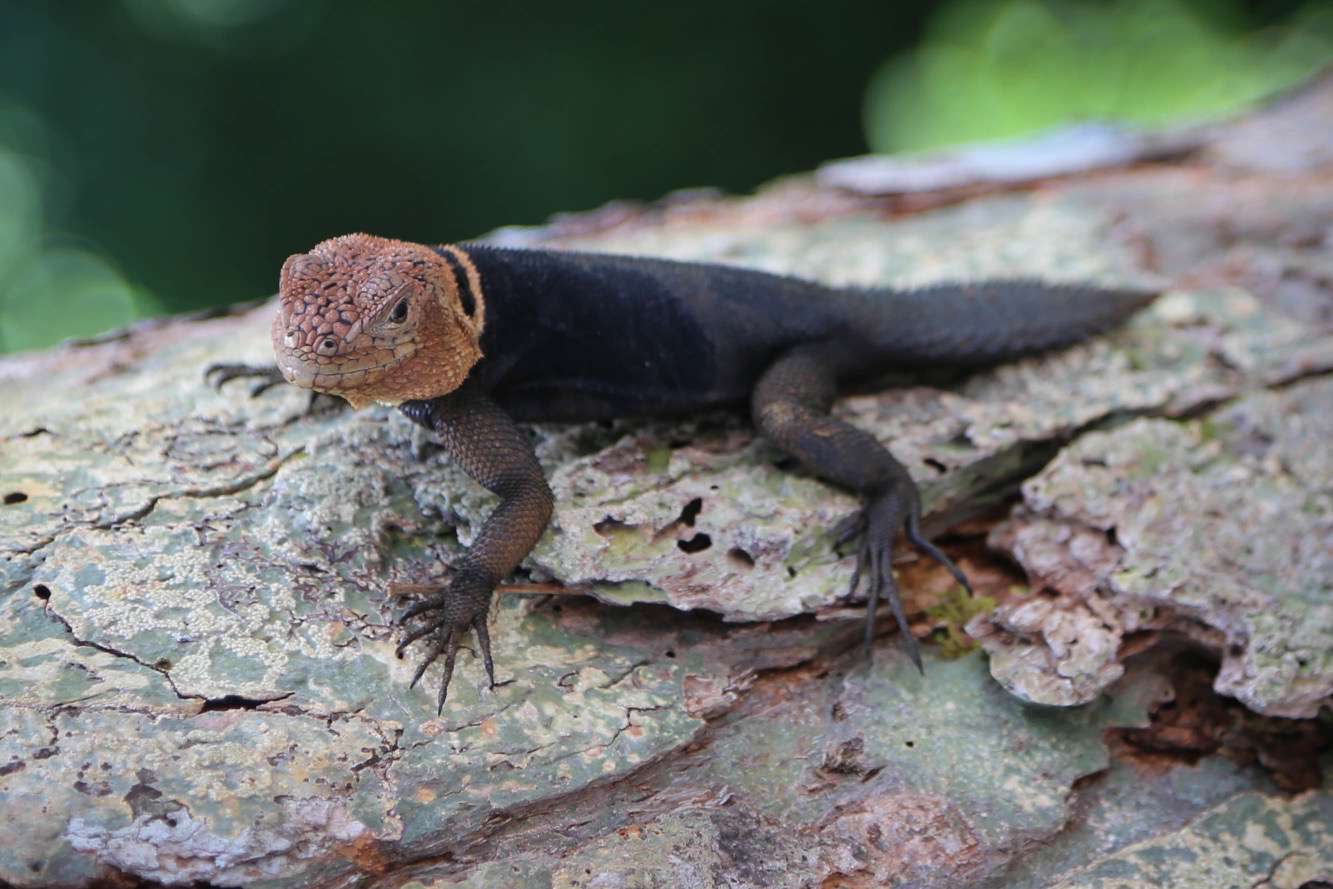 Creatures of all sorts, like this lizard call the Amazon home.

Getting up close and experiencing the Amazon River firsthand puts things into a more intimate perspective. It is a chance to see the trees in the forest, and if one is lucky, to catch a glimpse of the creatures that call this place home. 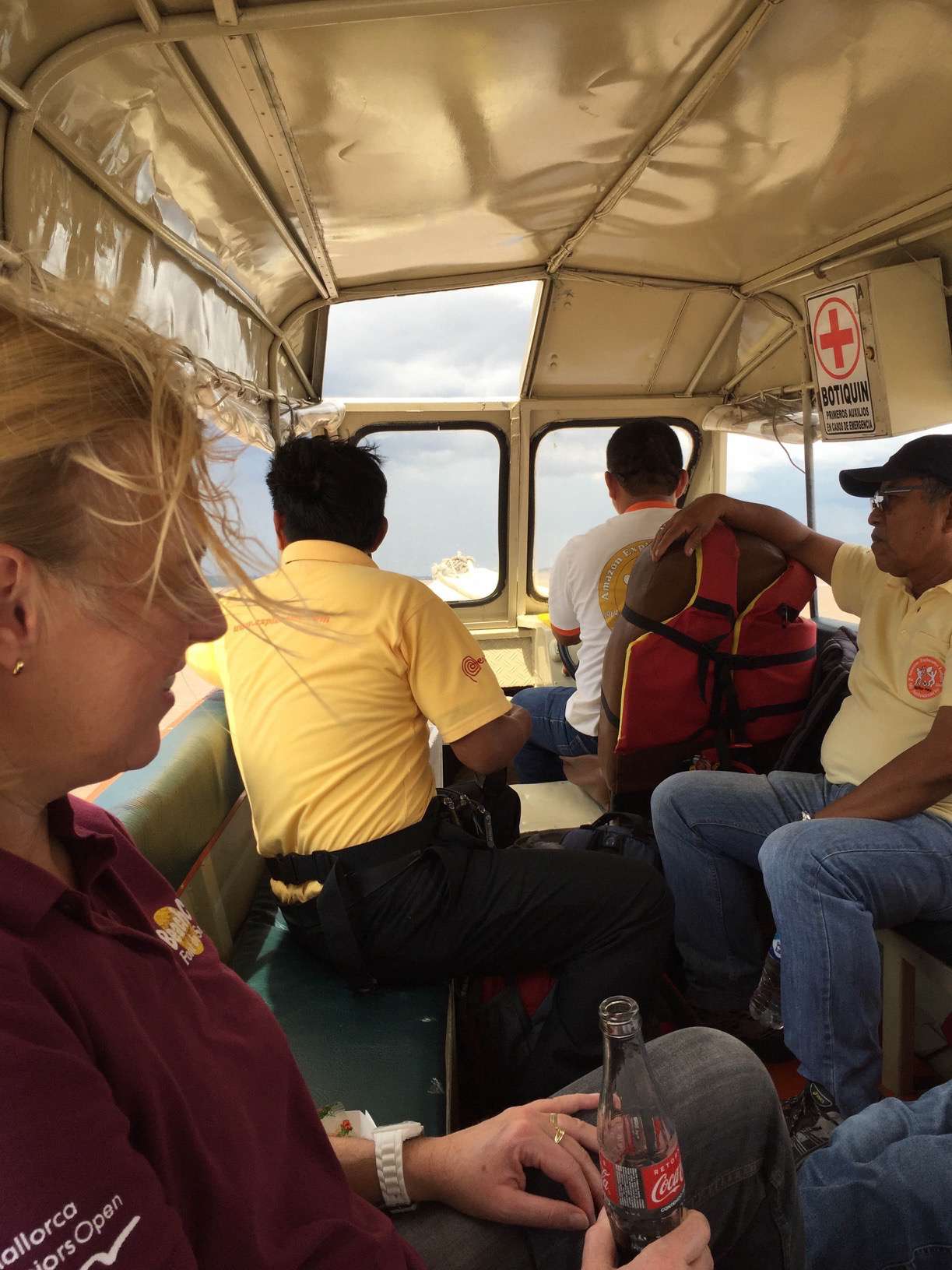 This transport boat is narrow, and the captain zips along, keep a constant eye out for the detritus that can easily sink the boat.

Once you enter the river region there are essentially two ways to get around. Boats along the water are as common as taxis in New York City, but you need a boat with a good motor to scoot along the water. And a good captain is essential if you want to make time and dodge the many limbs and tree fall that could easily sink your boat. Once you are off the river, the way to get around is to hike along the trails that disappear into the jungle. 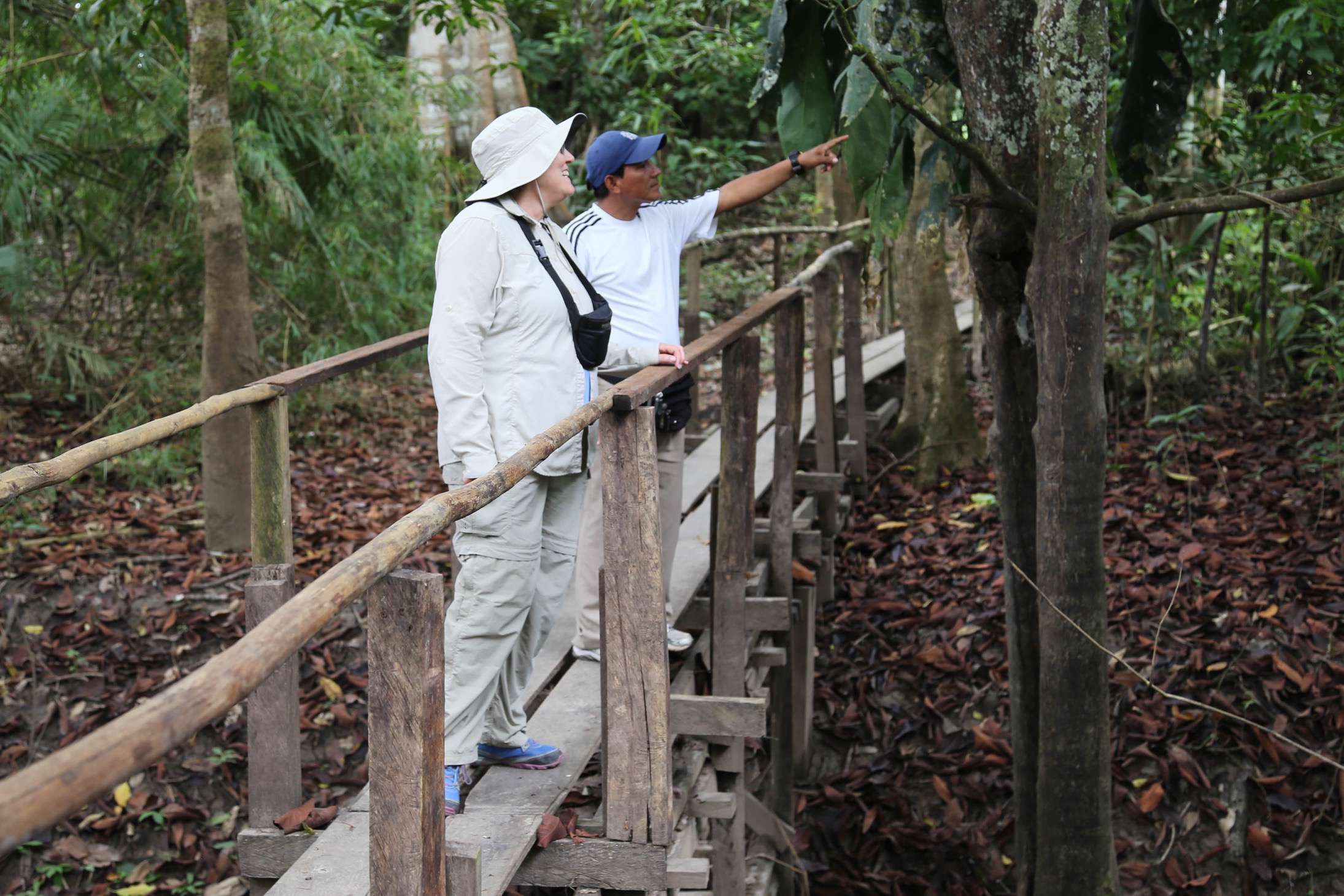 An expert guide, Willy Flores Lanza, points out to a visitor some of the wonders to be seen in the Amazon jungle. 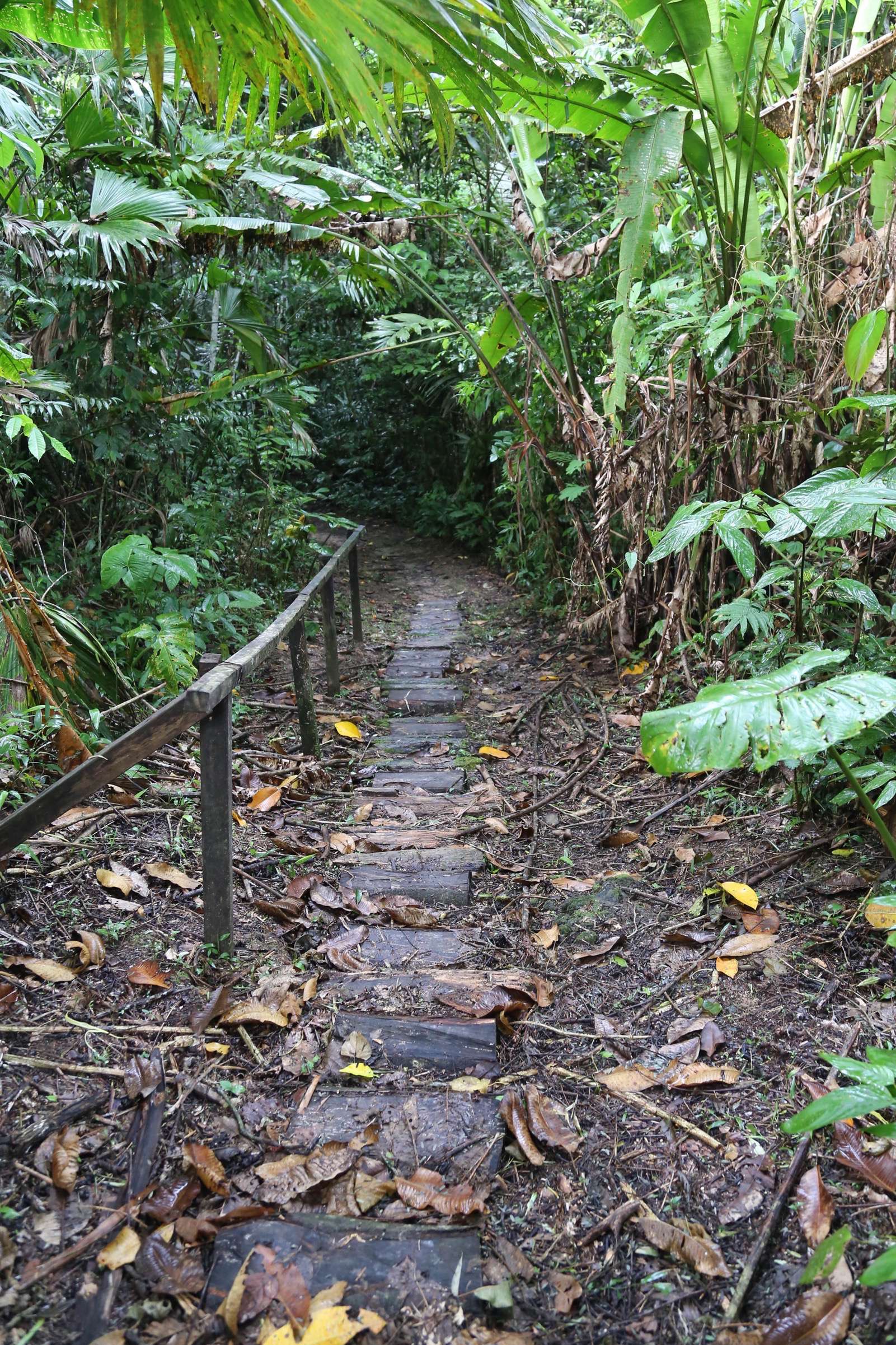 This is considered a well developed footpath, complete with a handrail. 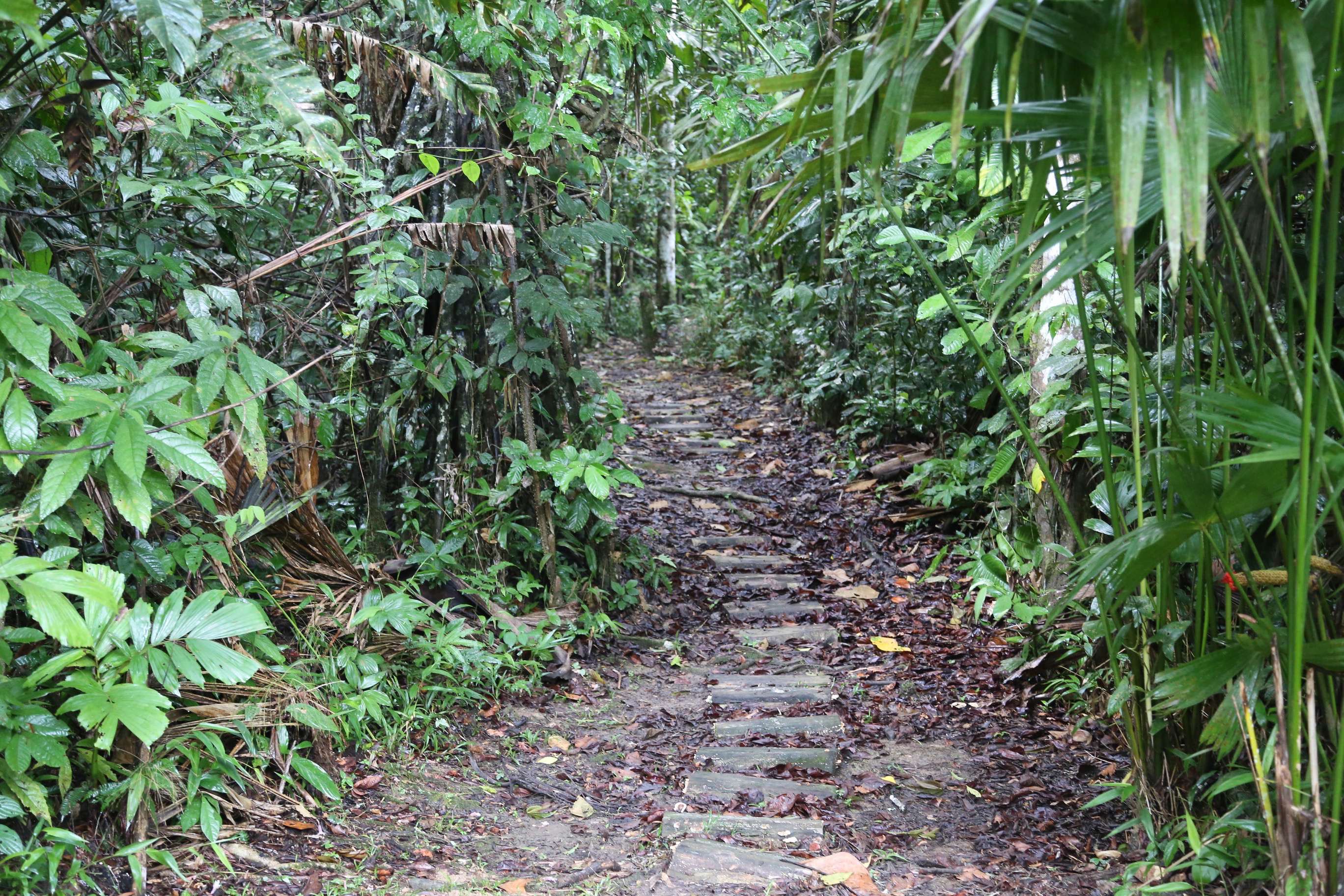 In no time, the jungle takes over, reducing humans to just another animal in the jungle. 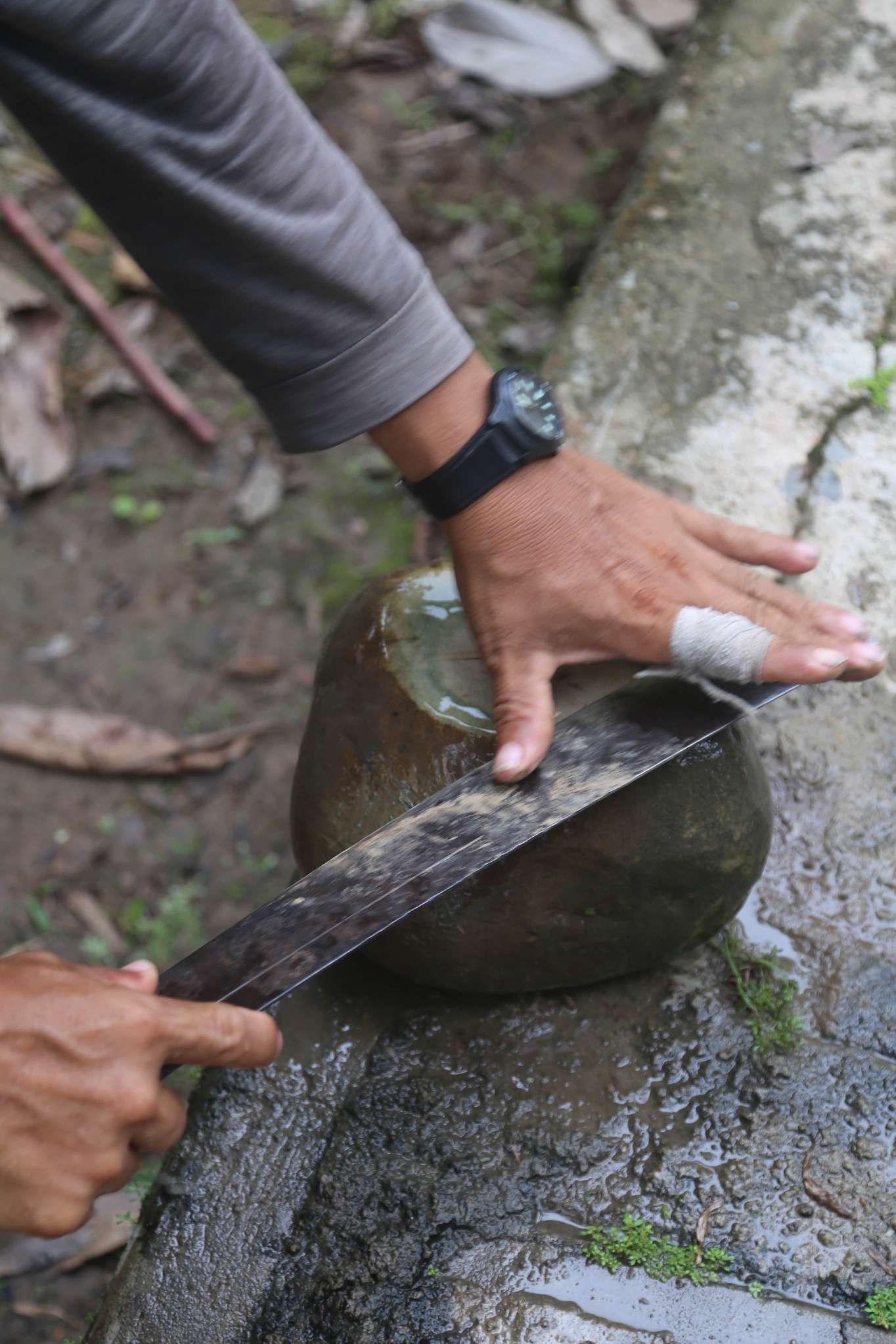 A good sized rock is a valuable thing along the Amazon River. There are few of them. They are given as gifts and are used to sharpen knives and machetes.

With an experienced guide, a visit to the Amazon is an opportunity to see gorgeous creatures like the Amazon River dolphin (or pink dolphin), the largest river dolphin in the world. Adult males can reach a length of eight feet and weigh up to 400 pounds. 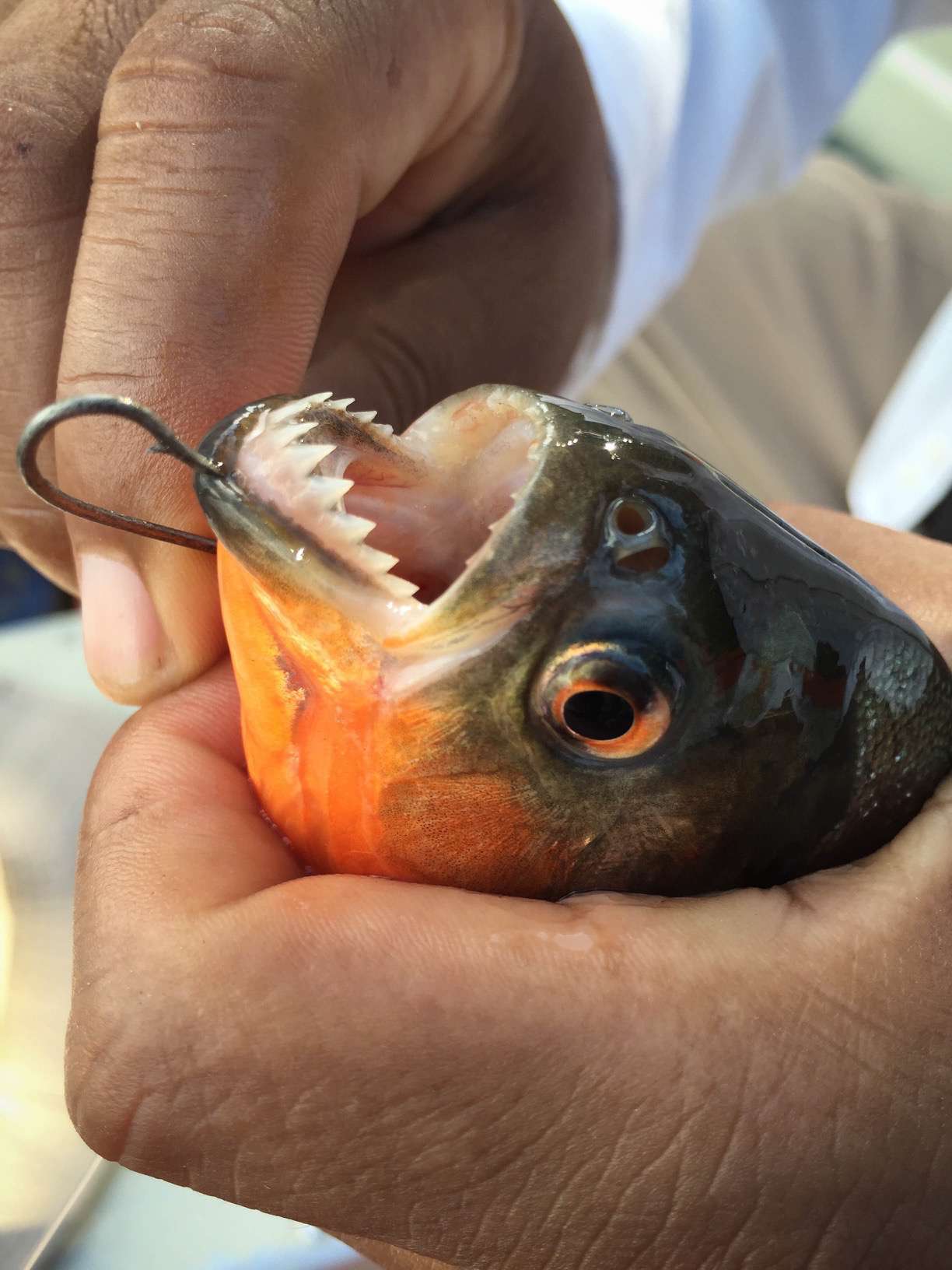 Even a small pink bellied piranha has razor sharp teeth. But they are also tasty.

The Amazon is also home to sinister denizens like the pink-bellied piranha, the highly poisonous bushmaster snake, the anaconda, or any number of other deadly residents. Insects, birds and many other creatures abound, and a good guide can point them out – and keep you from making a misstep. 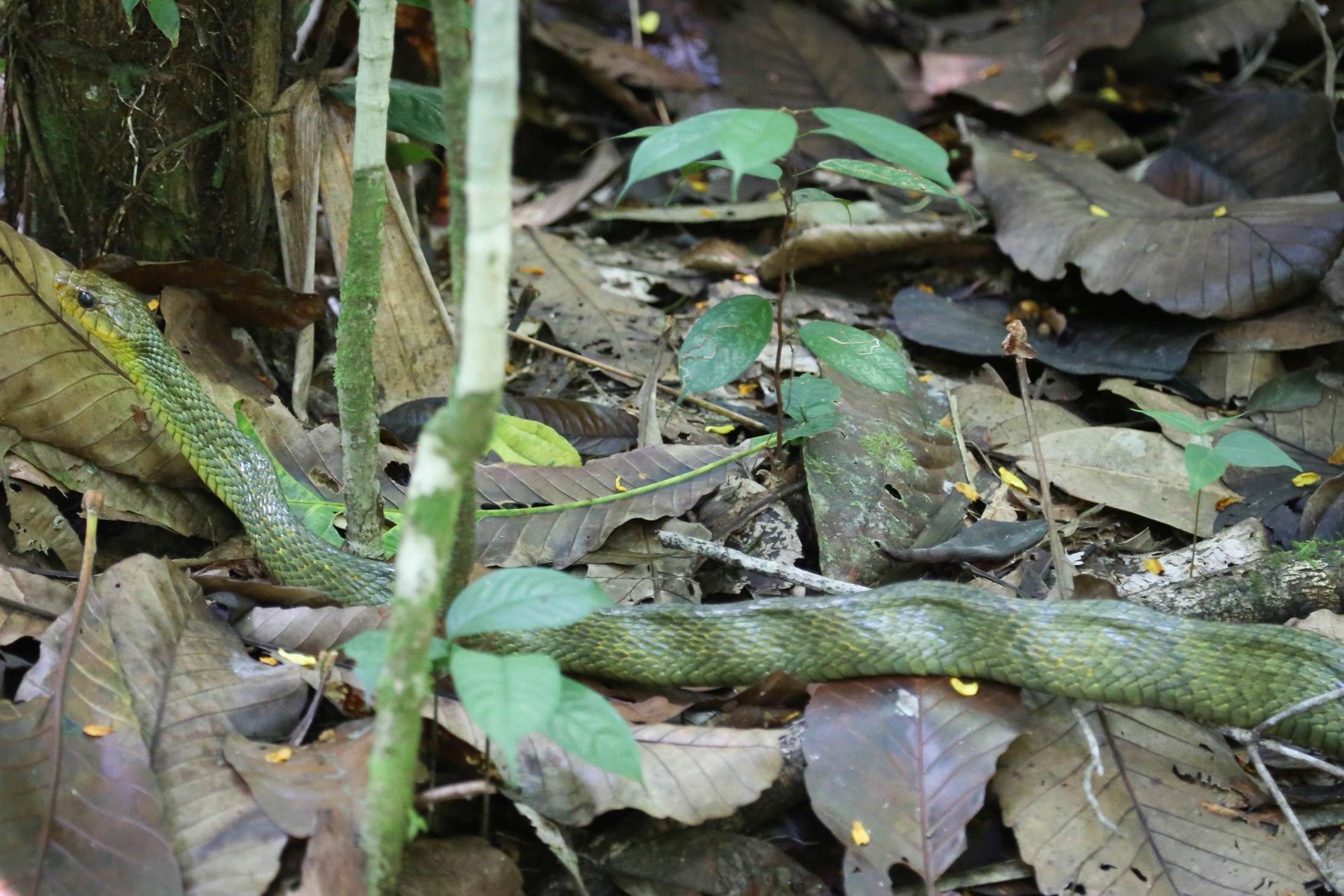 When your guide freezes on the pathway, you stop. he might have said “Bushmaster.” The only words heard were “Danger, poisonous snake!”

The moment you step into the jungle you are absorbed and feel like you have been enveloped (like a gauzy, steamy blanket), rather than being detached and observant. The heat is constant and the high humidity quickly dulls your senses. Even on a bright sunny day, the jungle canopy shuts out most of the light, shrouding details from the untrained eye. 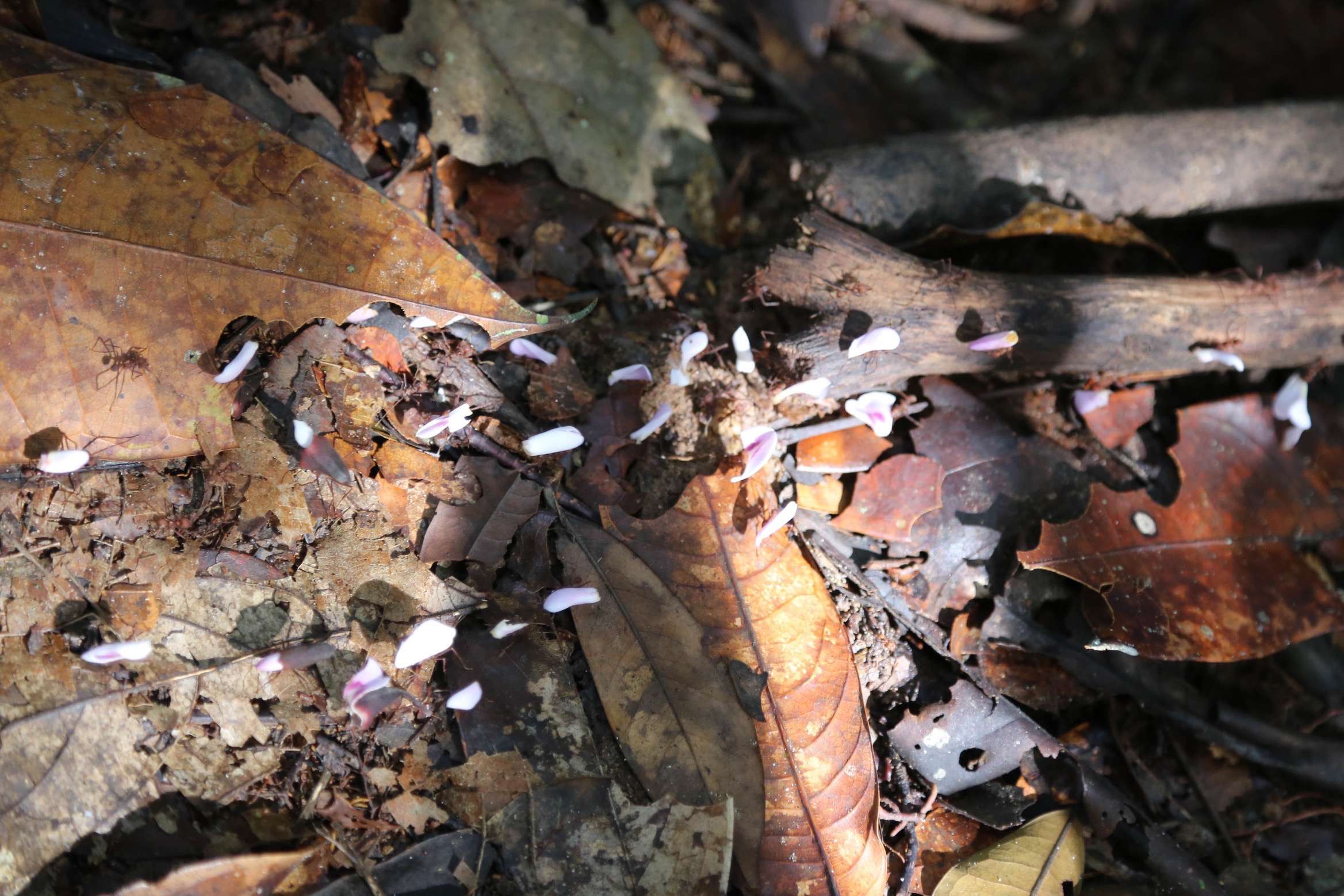 Leaf cutting ants carry off pieces of flower bloom from a tree. Workers in the canopy trim the pieces and other workers on the ground pick them up and carry them off. 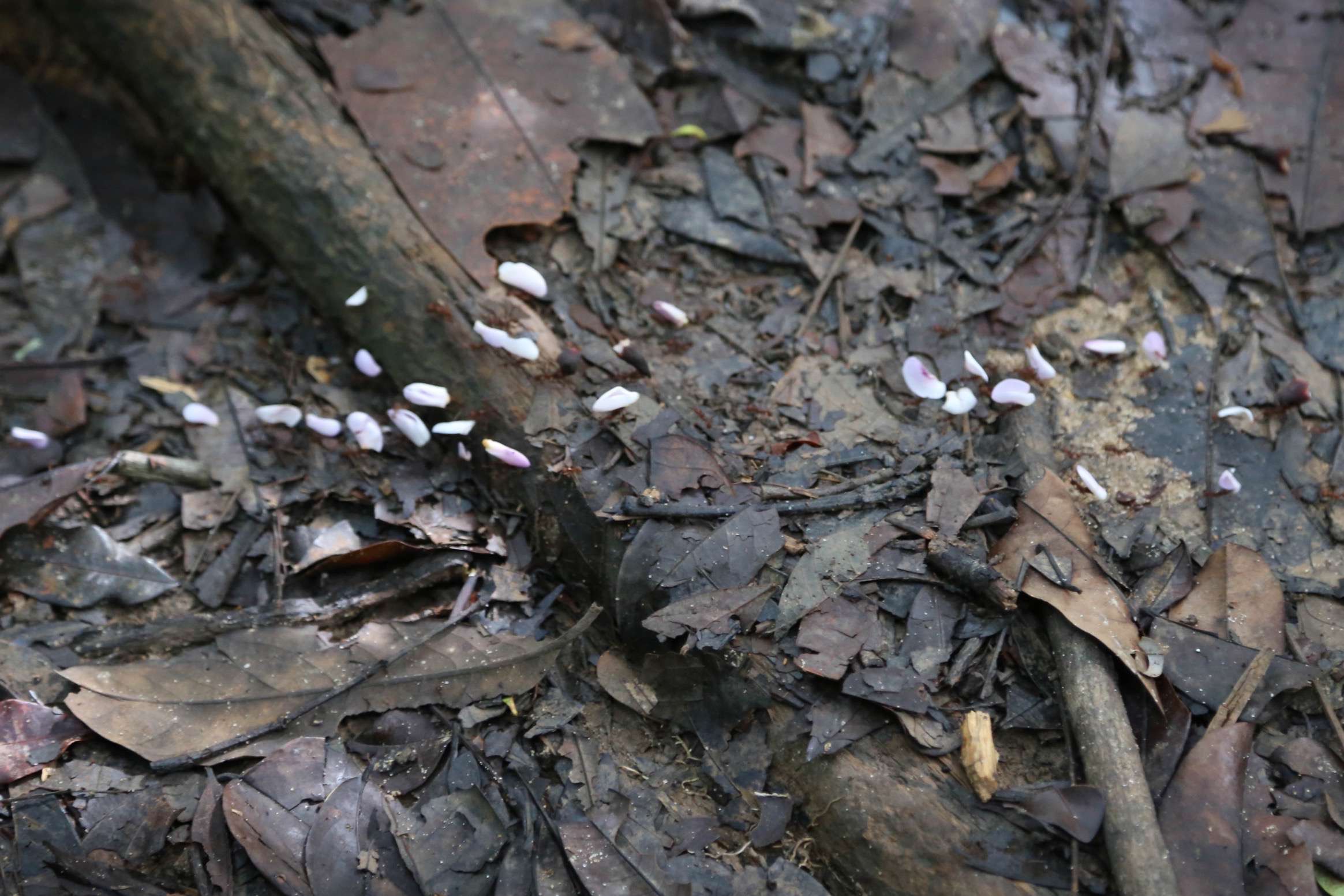 Leaf cutting ants don’t destroy, they selectively harvest, ensuring the tree lives a long time and provides a maximum amount of food for the colony.

This is a place of rare beauty. And once your eyes become accustomed to the apparent wildness of the jungle you are able to discern the harmony of nature. 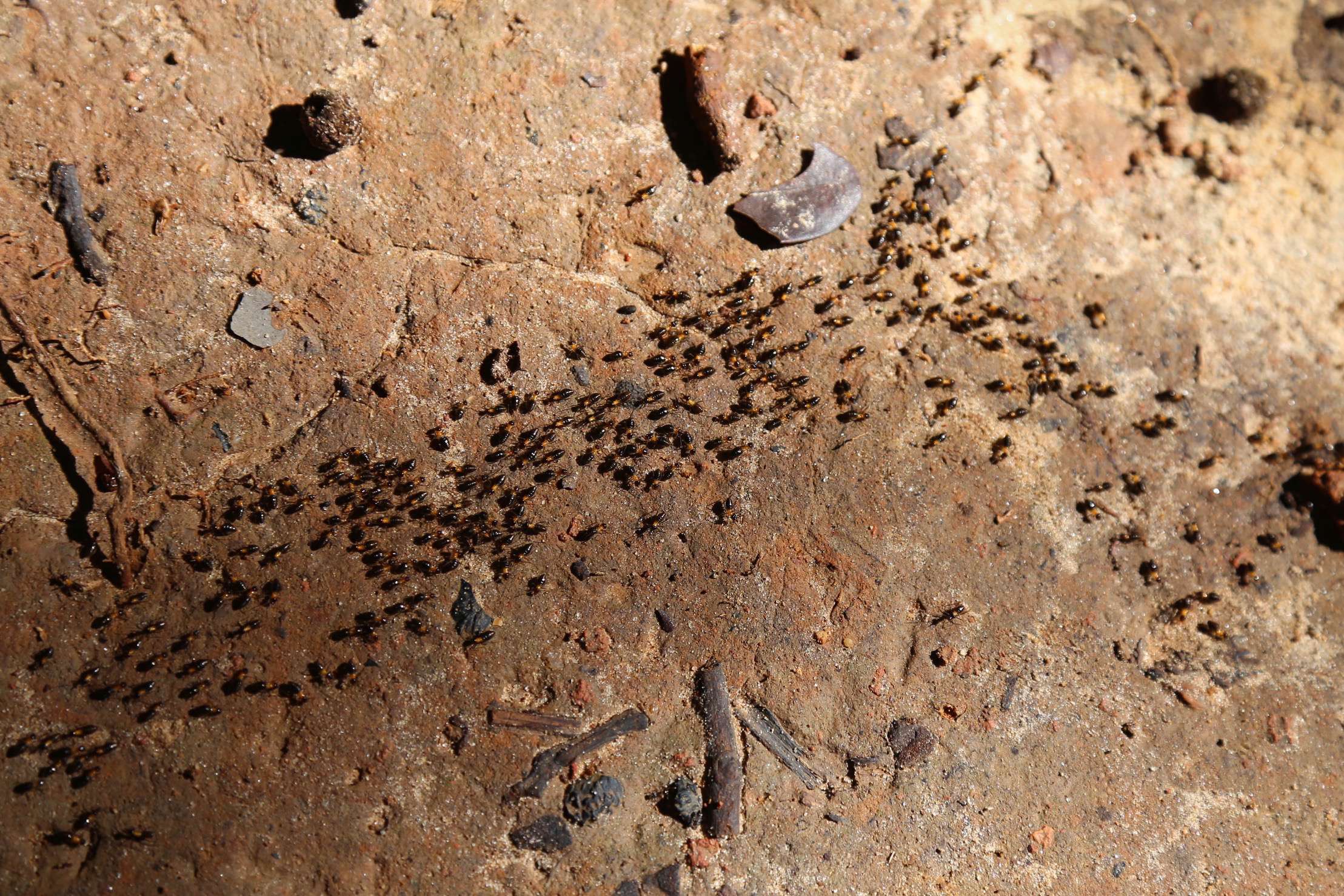 Gives these ants a wide berth. They forage the jungle seeking out food.

Human beings may think themselves the most evolved species on earth, but make no mistake, the creatures of the Amazon River and the jungle that surround it are the true rulers of this realm. They will be there long after humans are gone. 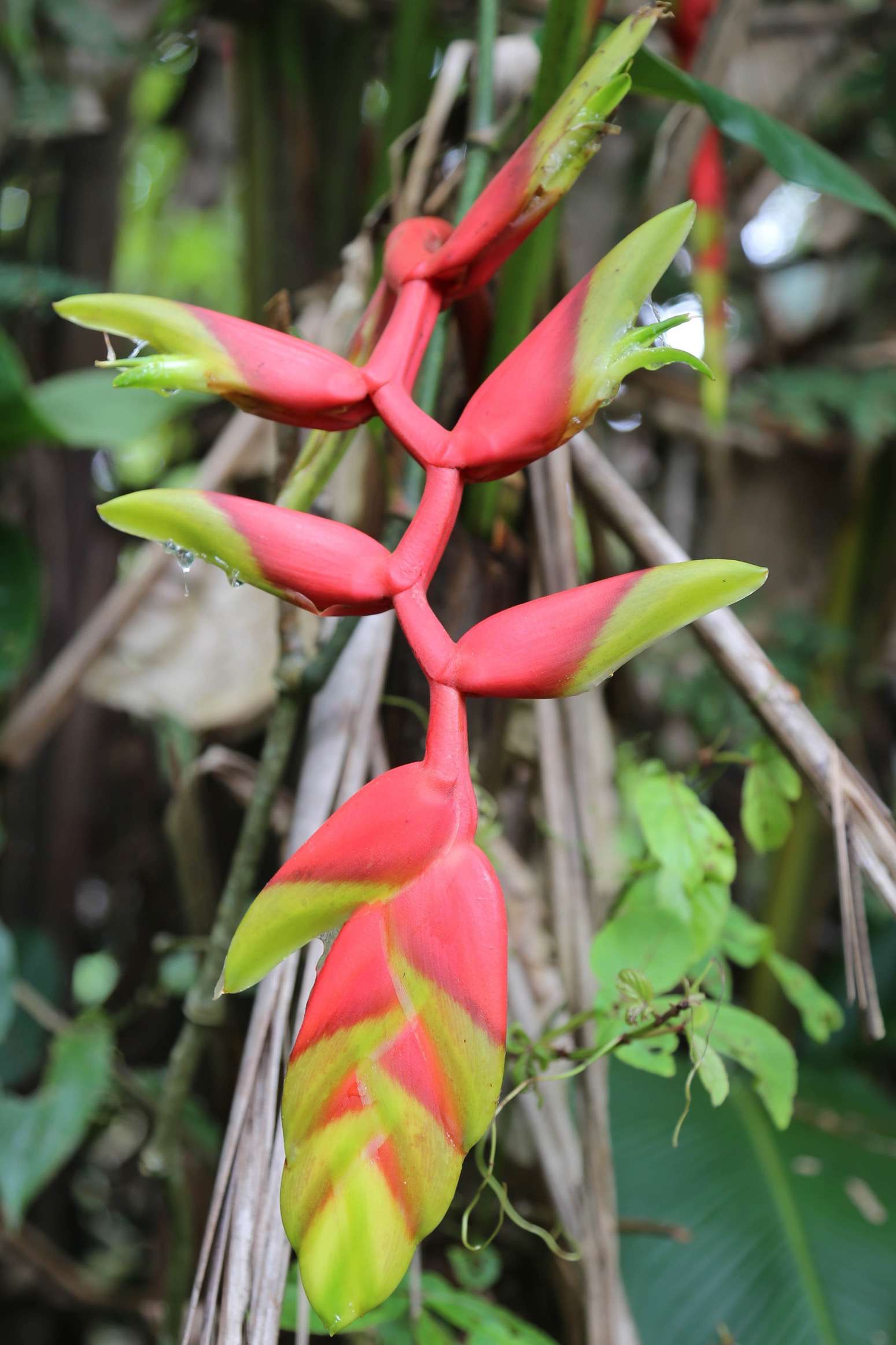 There are over 65 varieties of Bird of Paradise. This one is dripping with sweet nectar to attract insects. 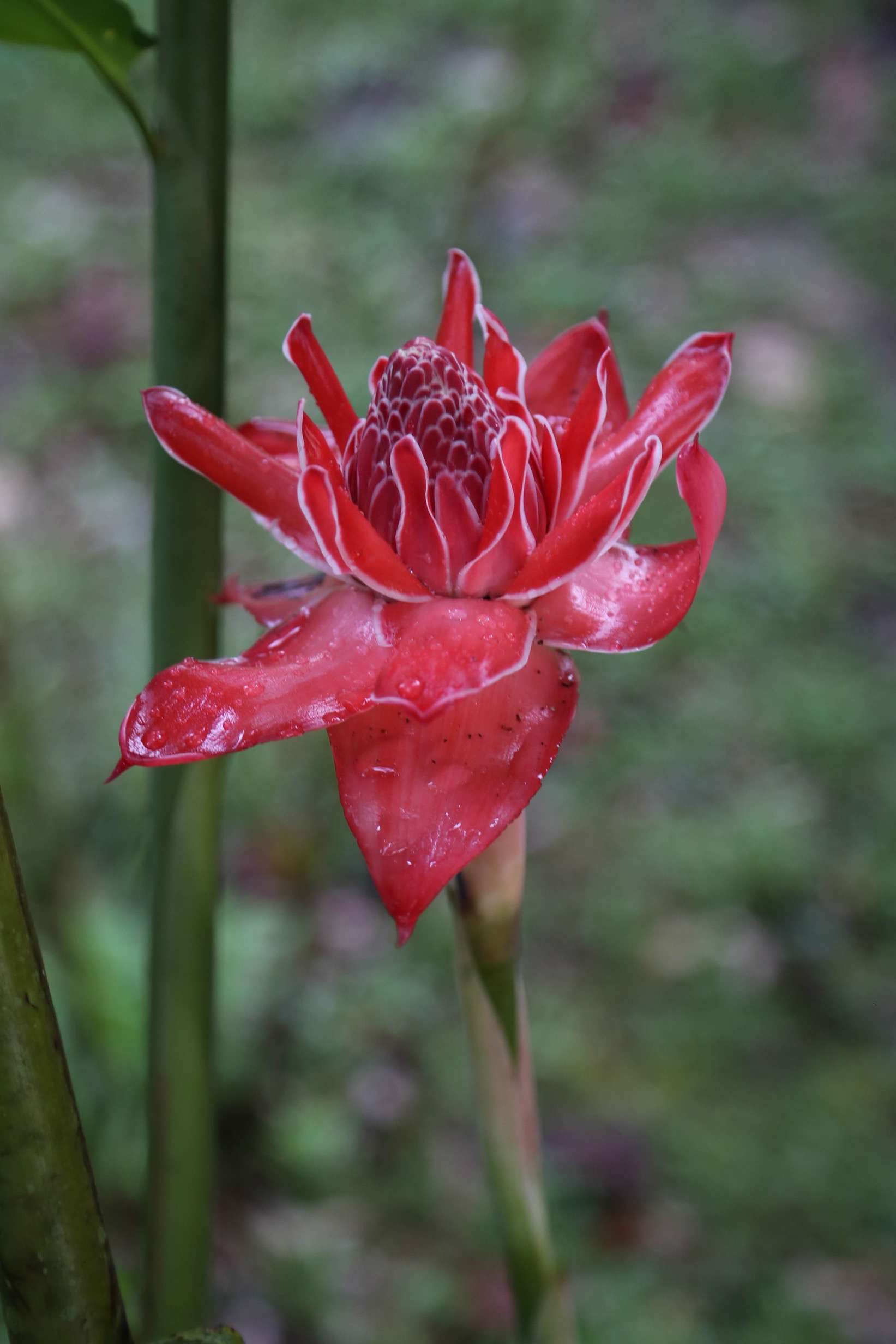 Plants and flowers of all sorts can be seen wherever you turn. 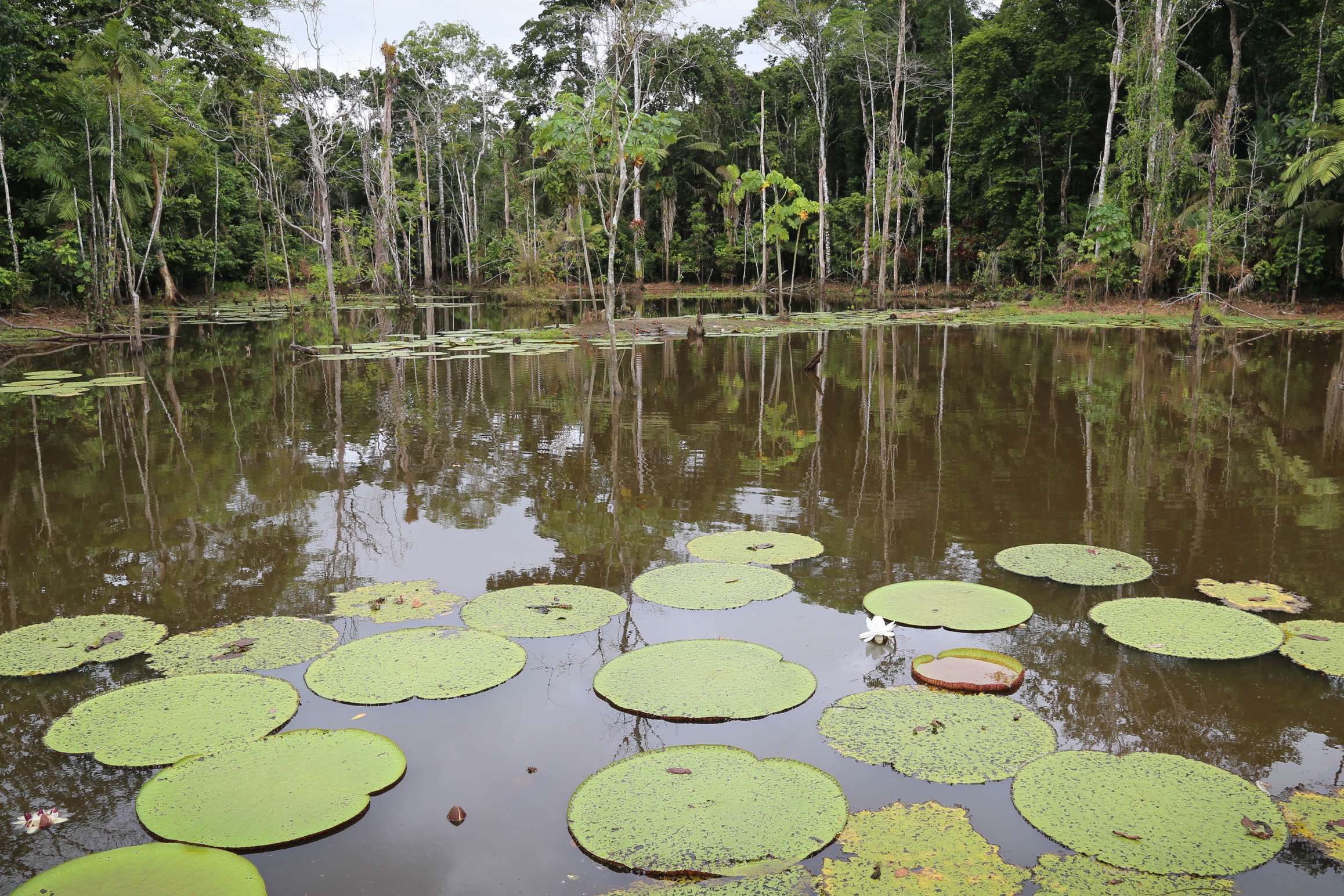 The jungle is a constant cycle of renewal and decay. High temperatures and humidity wraps you in sweat and heat. 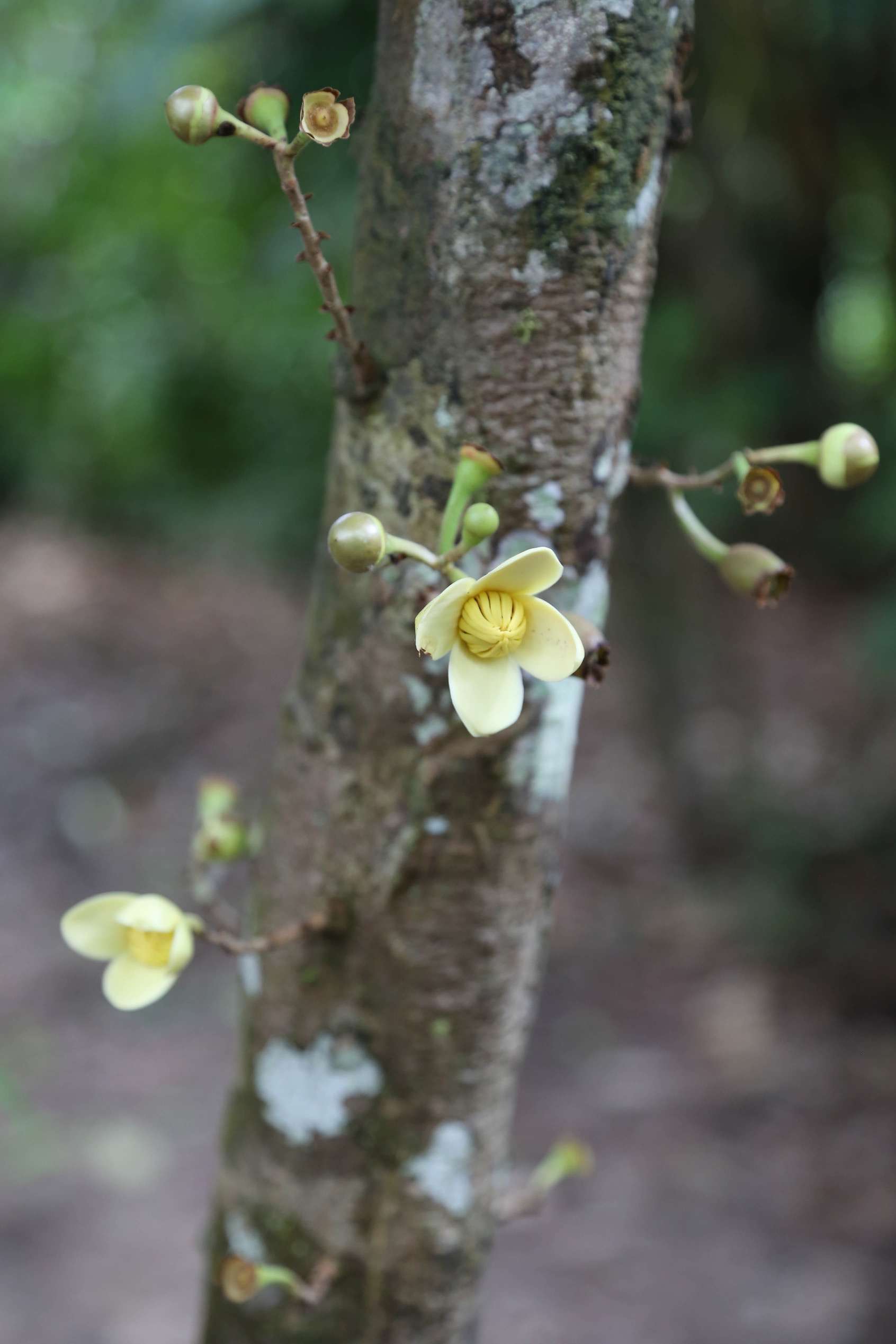 What looks like a pretty flower growing on the bark of a tree will end up as a cocoa pod and turned into delicious choclate. 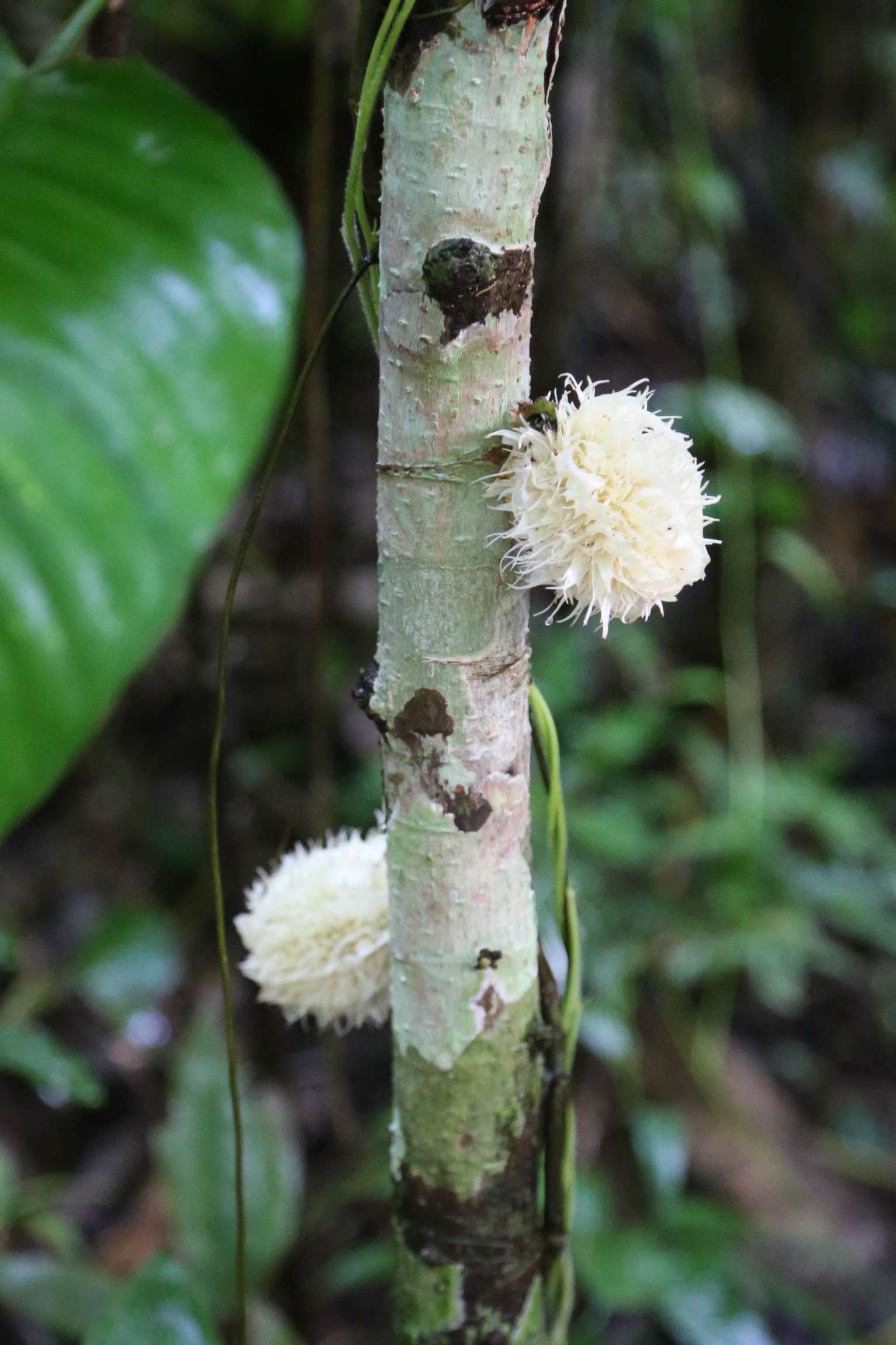 Many people would be surprised to learn cocoa — the source of chocolate — grows in pods along the trunks of the tree. These are very small and will grow much larger before they are harvested. 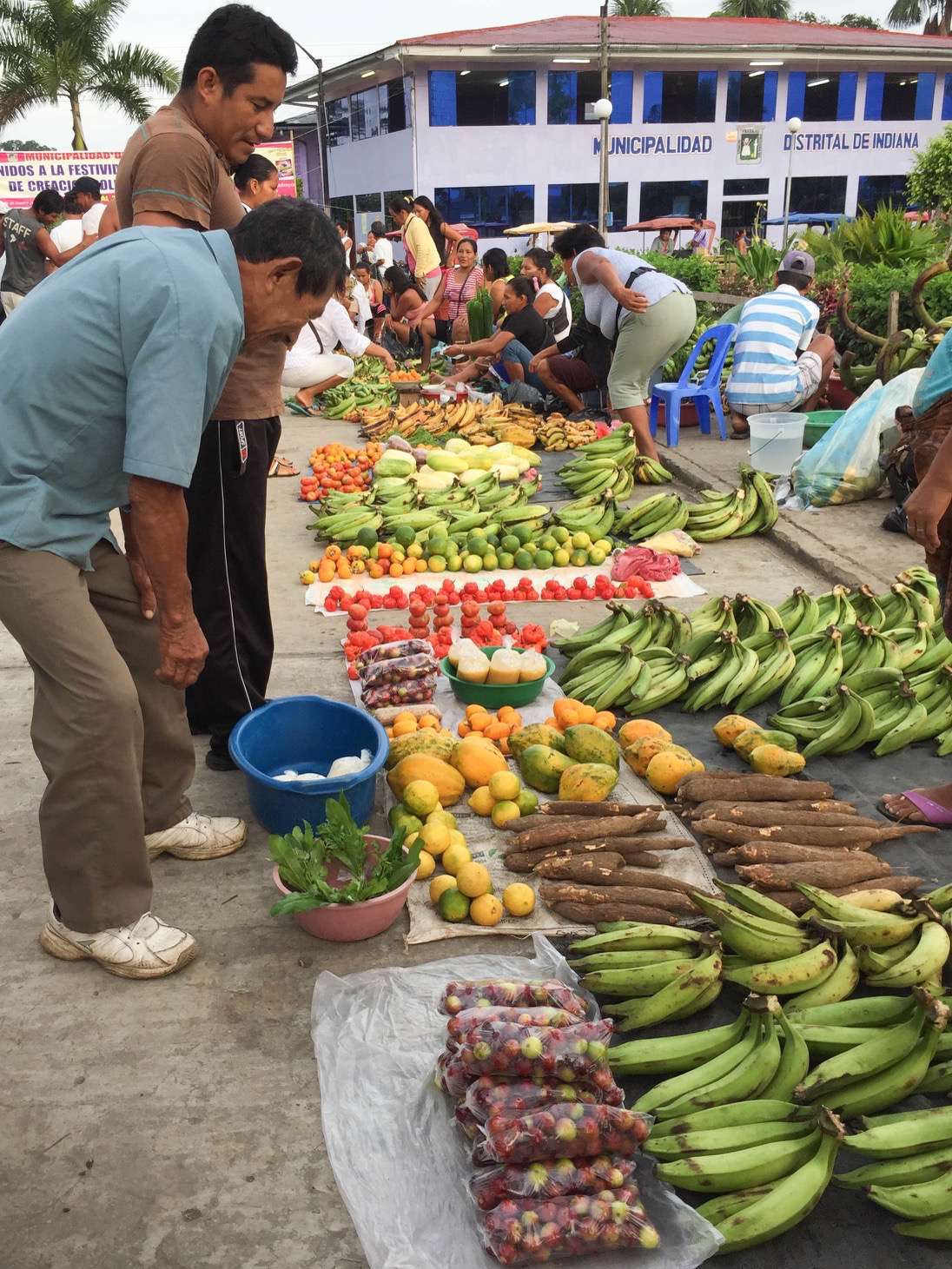 Small villages up and down the Amazon raise food crops for sale at open air markets. 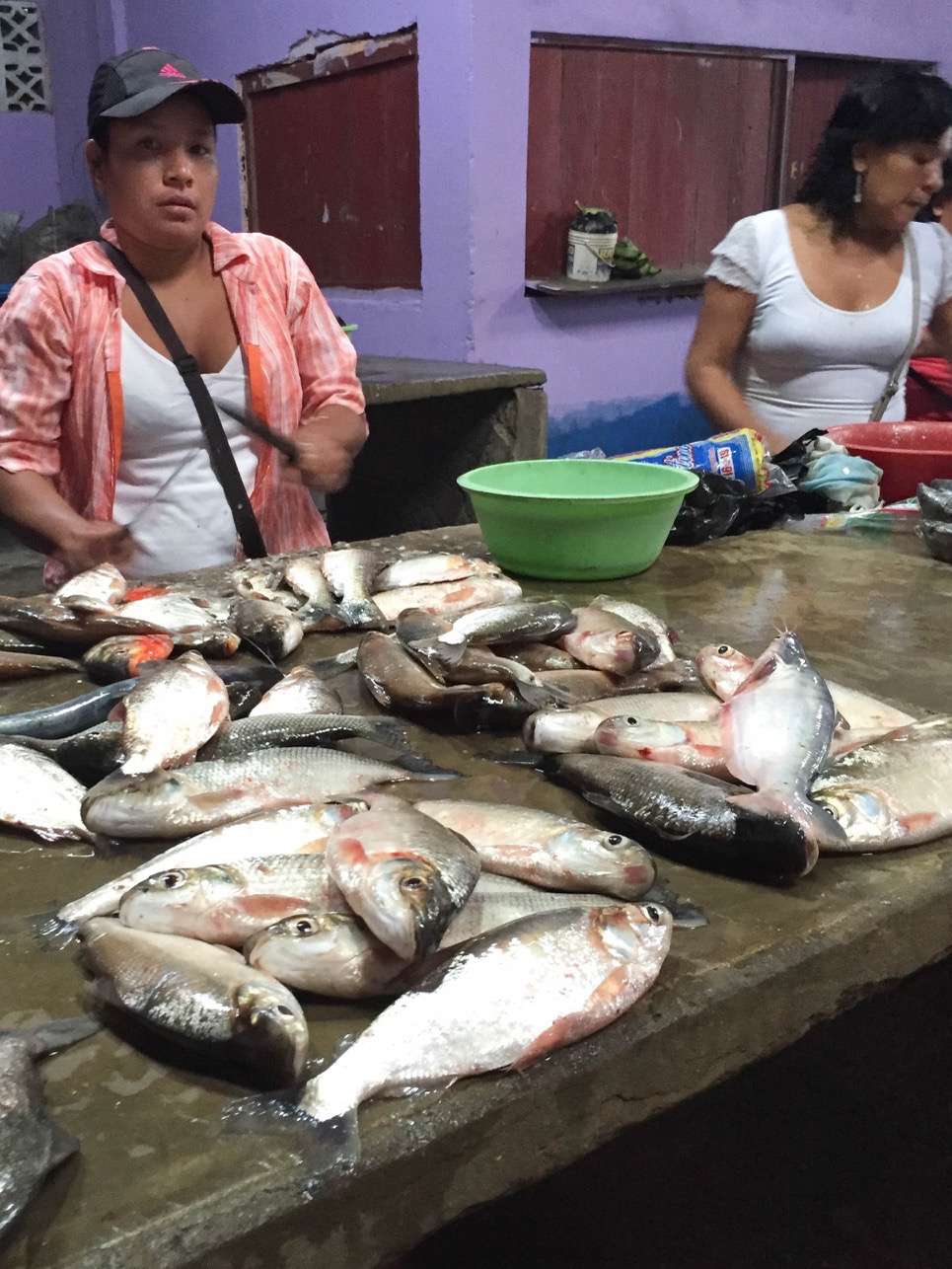 There’s always plenty of fresh fish to be found at the local village markets as the fish monger sharpens her knife.

For more information about the Amazon River, click to these websites: