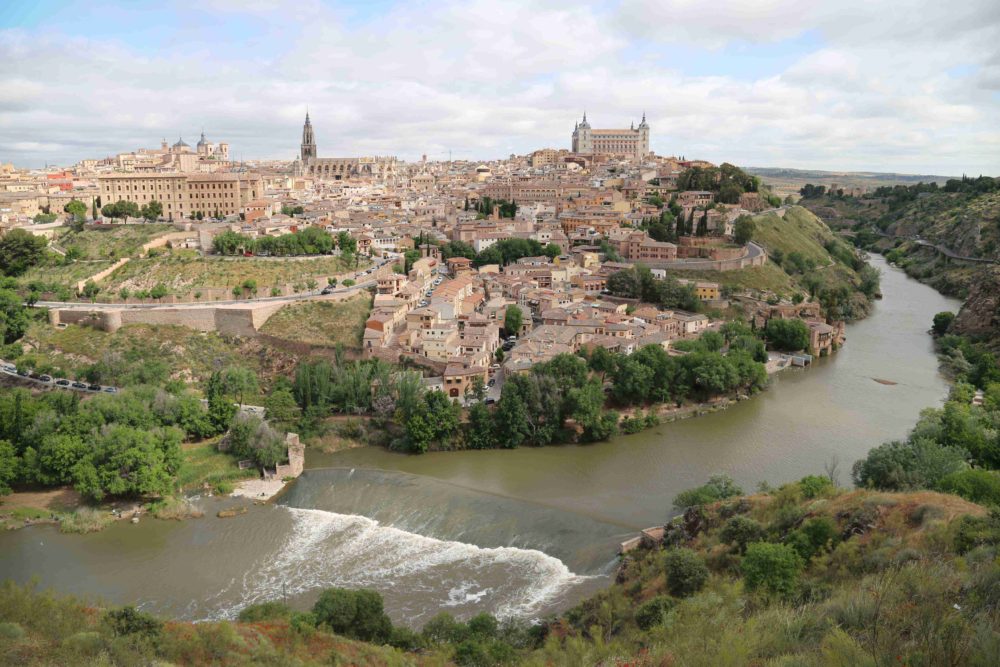 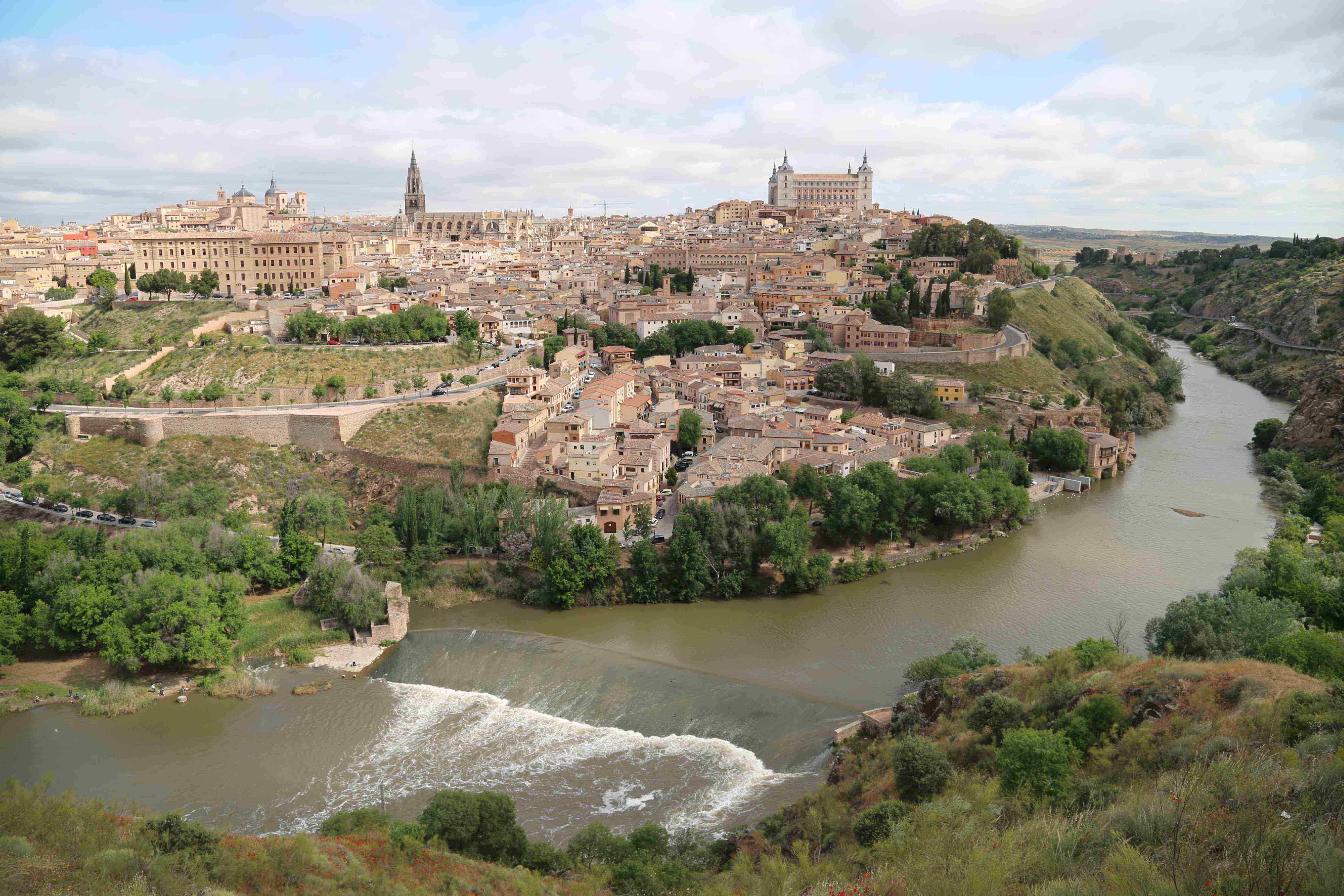 The Tagus River is essential to the making of Toledo, Spain. The river eroded the granite and created a promontory on three sides. El Alcazar, upper right began as a Roman mansion in the 3rd Century A.D.

History is a blend of people, place, events, and moments. For thousands of years those elements have been mixing together in Toledo, Spain to create a fascinating history. Like so many good stories this one begins with a place. 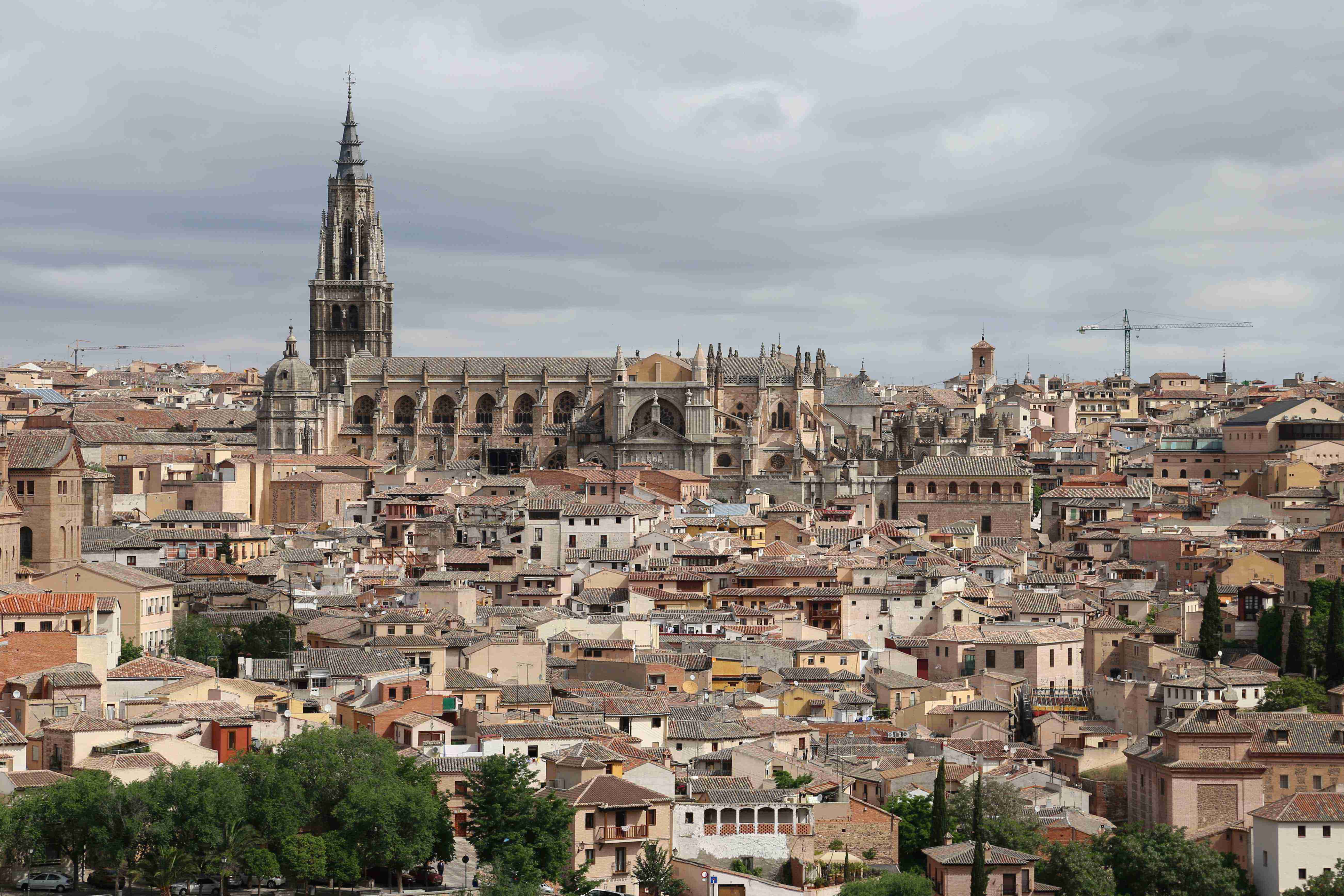 Toledo, Spain is one of the jewels of Spanish history. 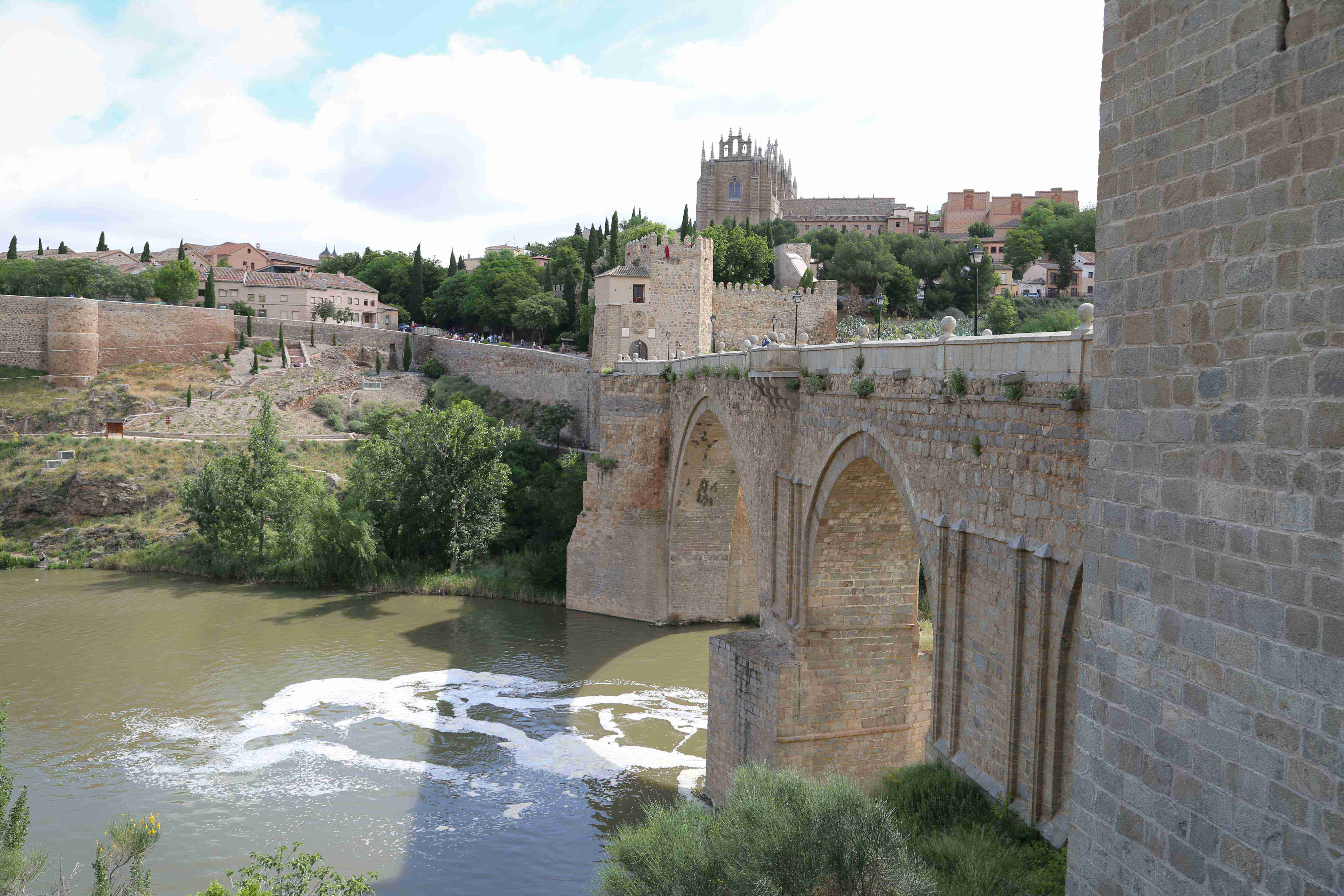 Toledo was a favored location because natural defenses like height and the steep hills kept the residents safe from attack. 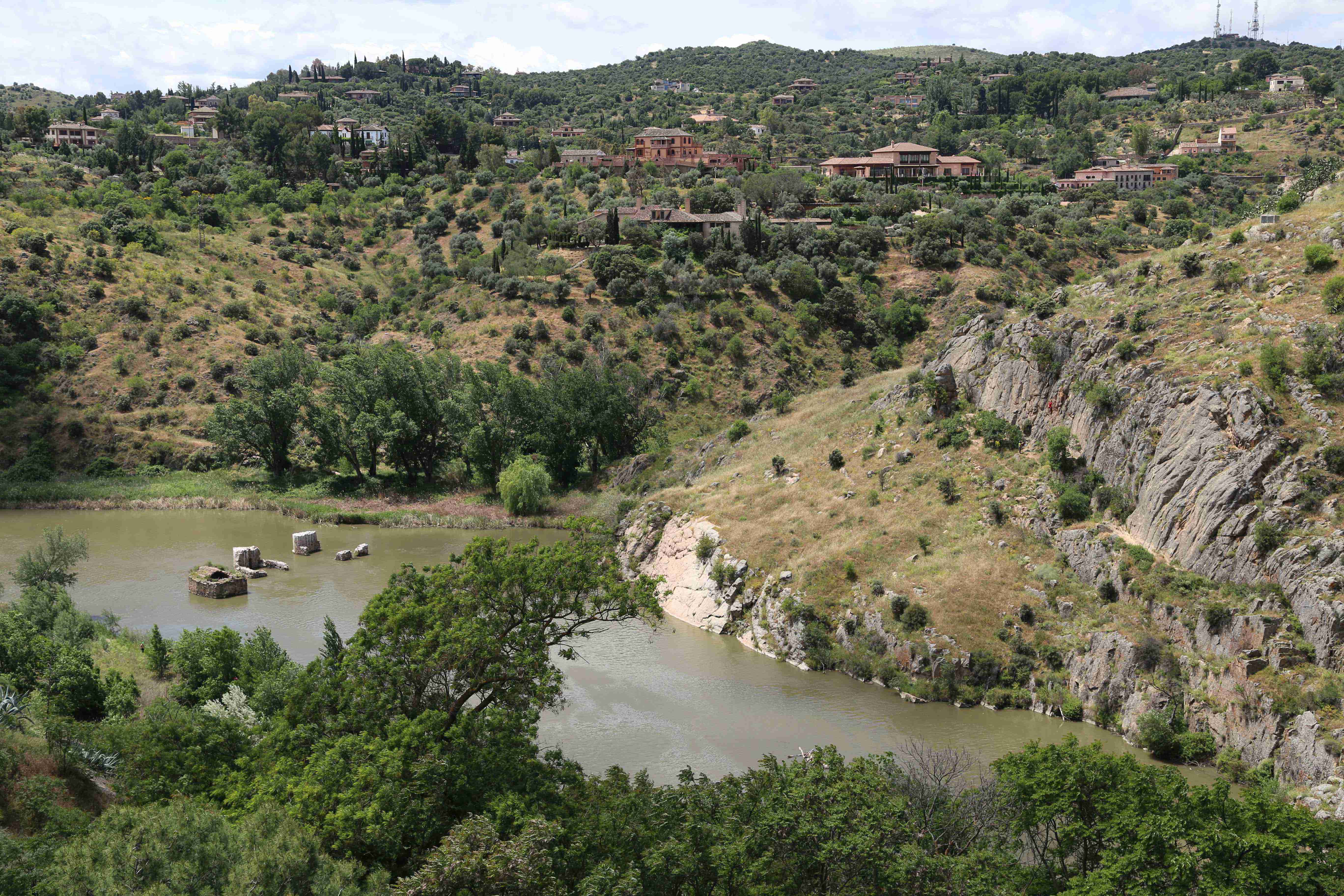 The view from the old city of Toledo affords a sweeping view of the countryside beyond the Tagus River.

For countless centuries the longest river in Spain, the Tagus, flowed at a spot in the central part of the country, etching deeper into the granite hillsides to create a promontory on three sides. When Celtic and Iberian tribesmen constructed a wall along the steep north side they had a highly defensible position. That is until 193 A.D., when the Roman Empire decided Toletum (as it was then known) would be an ideal place from which to rule the western edge of their empire. They drove out the Celtic tribesmen and appropriated the location for themselves. 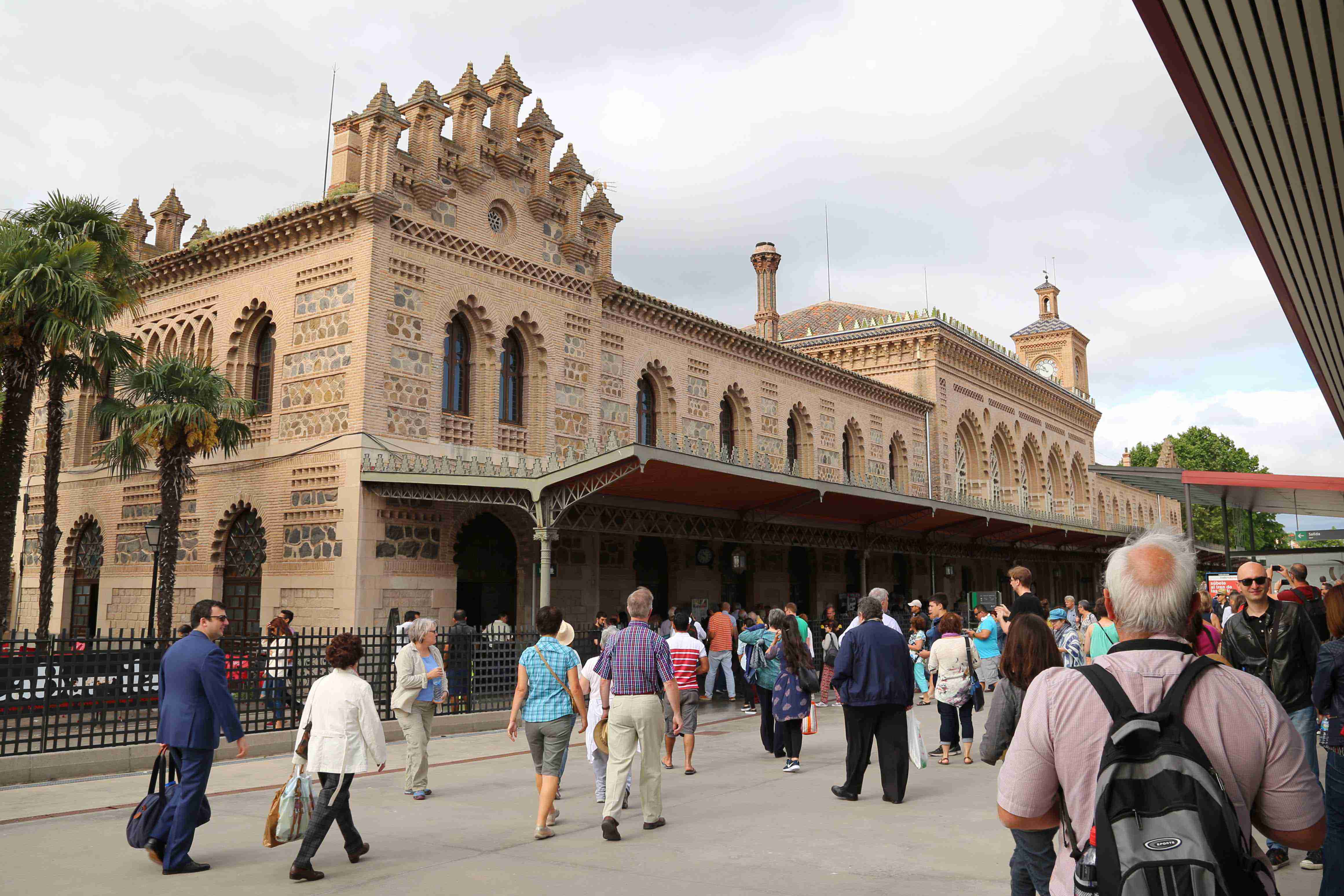 Today, visitors arrive in Toledo at the train station. 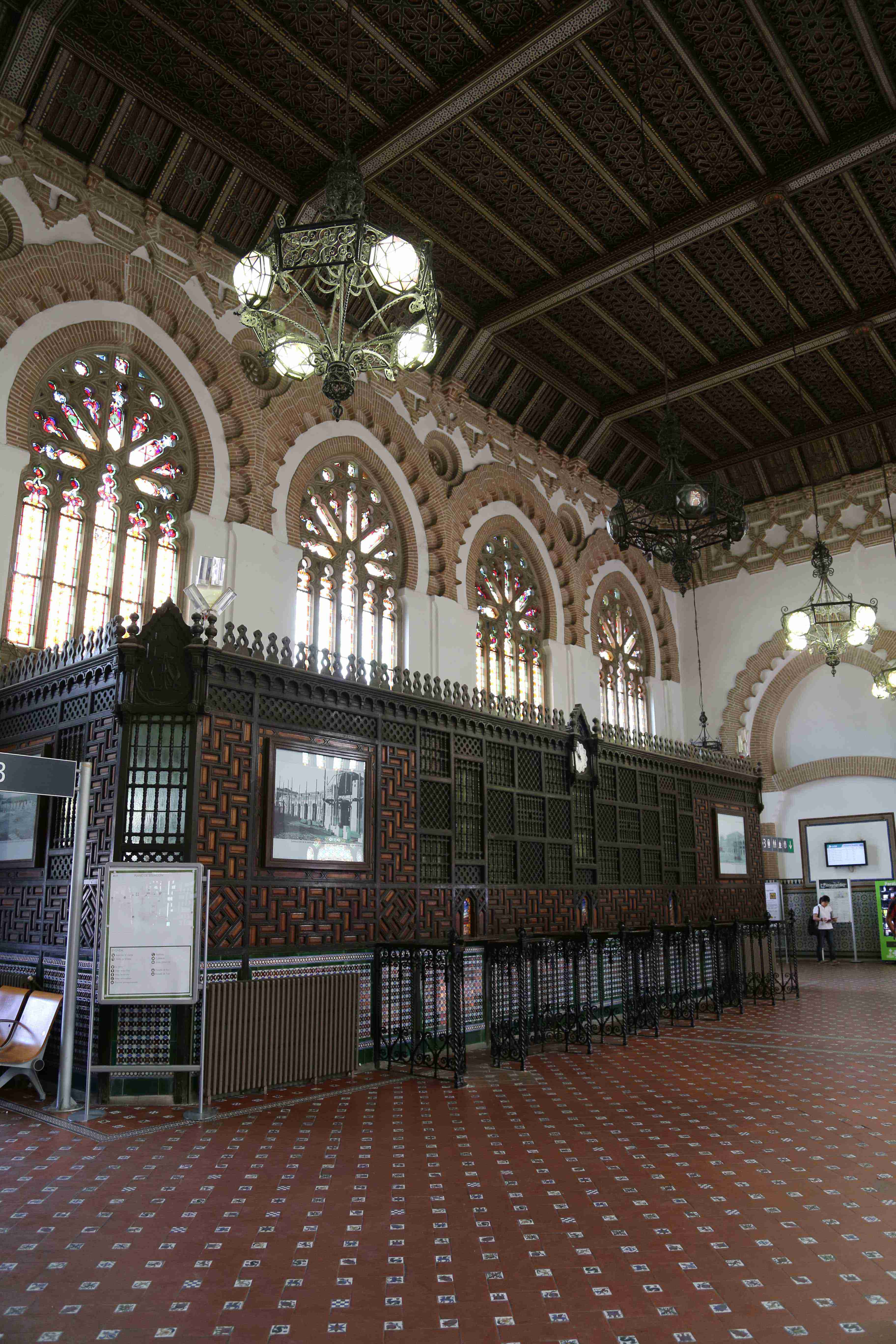 Inside the train station at Toledo, Spain, with architecture that reflects both Spanish and Moorish influences. 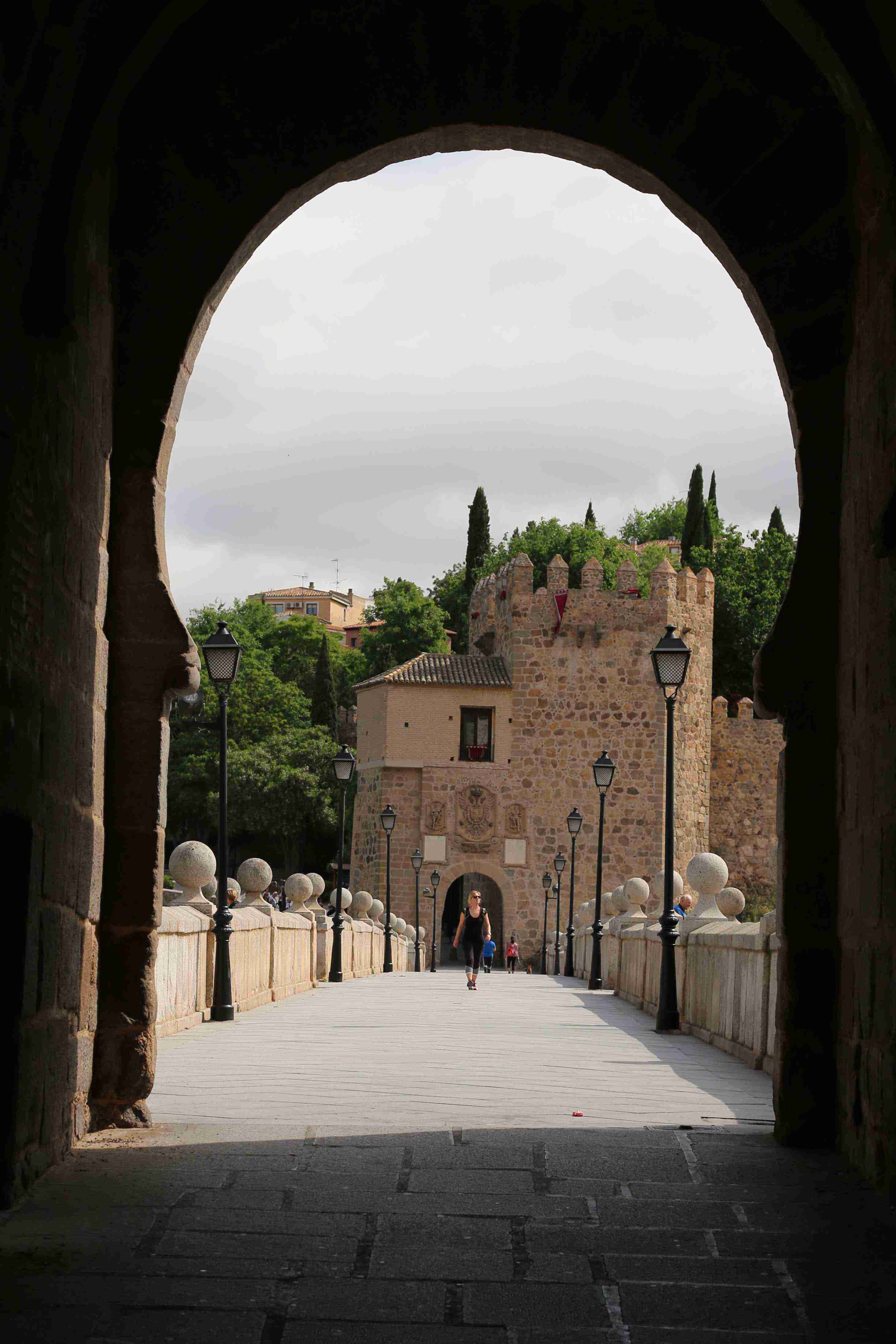 With plenty of granite to construct gates, bridges and buildings, Toledo became a city in an ideal strategic location. 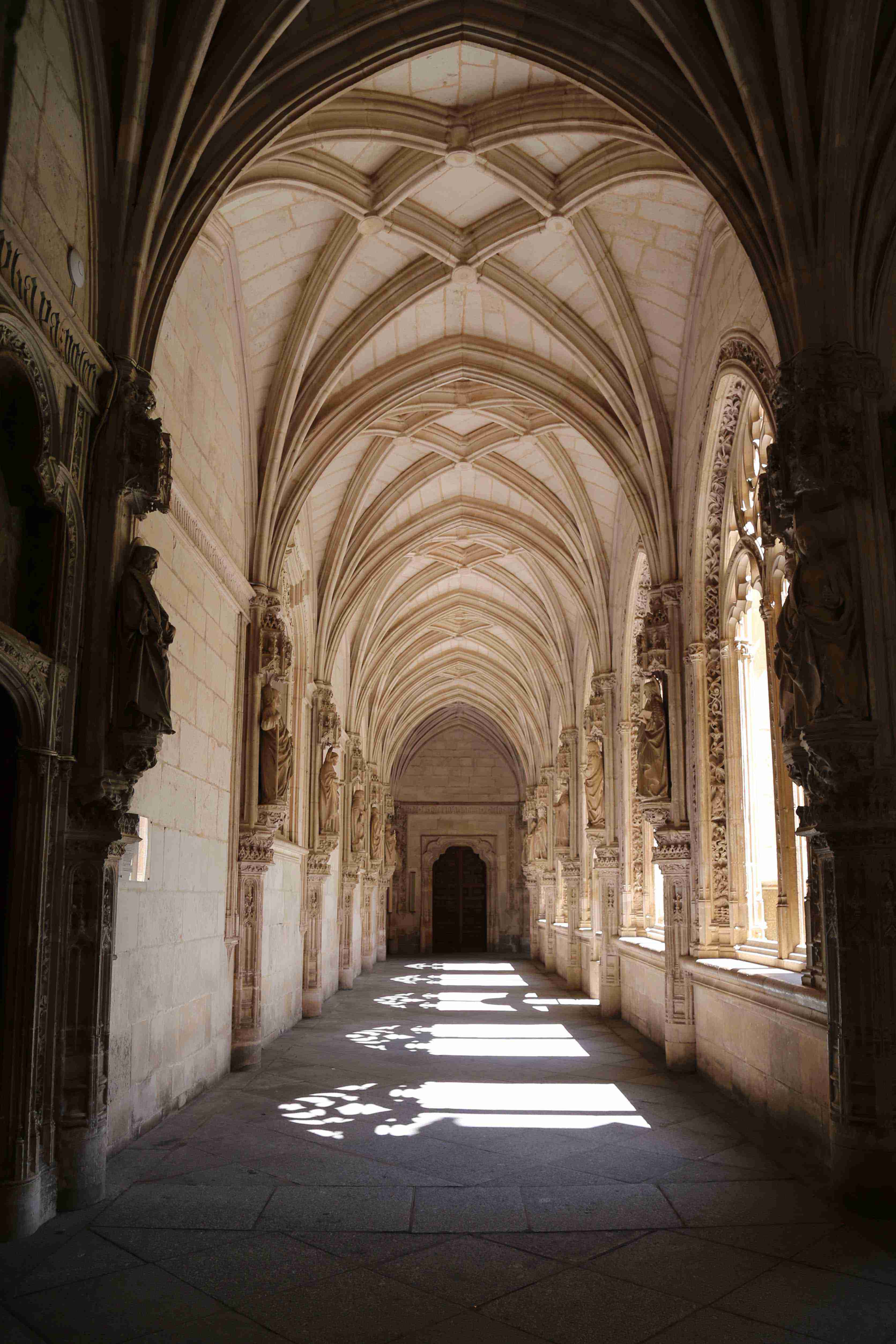 A corridor inside the clooister provides a quiet meditative space.

The Romans clearly liked what they had seized because there they built the largest circus in Hispania (as they called it), with a capacity for up to 15,000 spectators. Games, chariot races and other events were held in the huge complex and in the 3rd and 4th Centuries A.D. wealthy Romans built homes for themselves in Toledo. 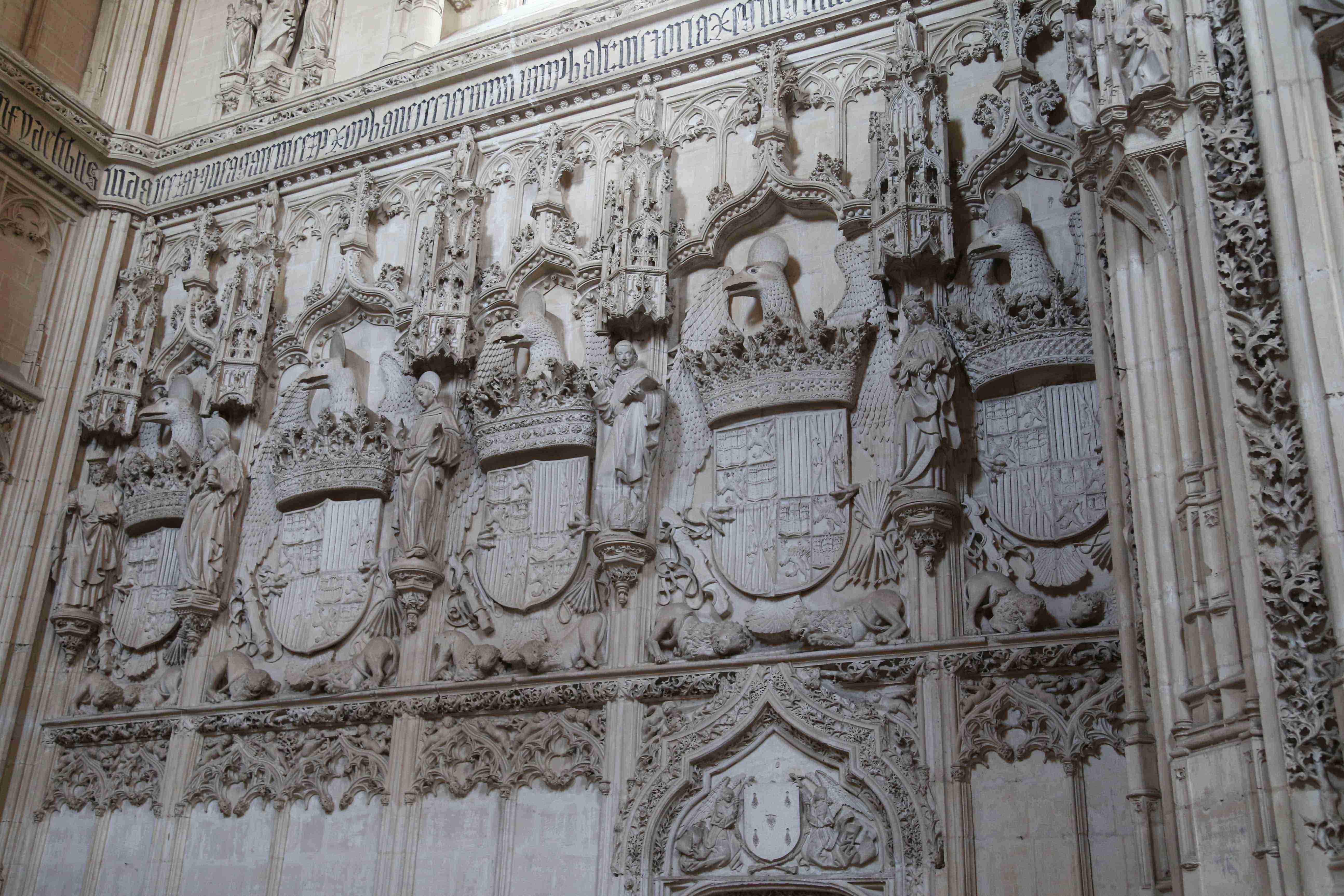 Toledo was for a time the seat of Spanish power before the king moved the capitol to Madrid in 1561. 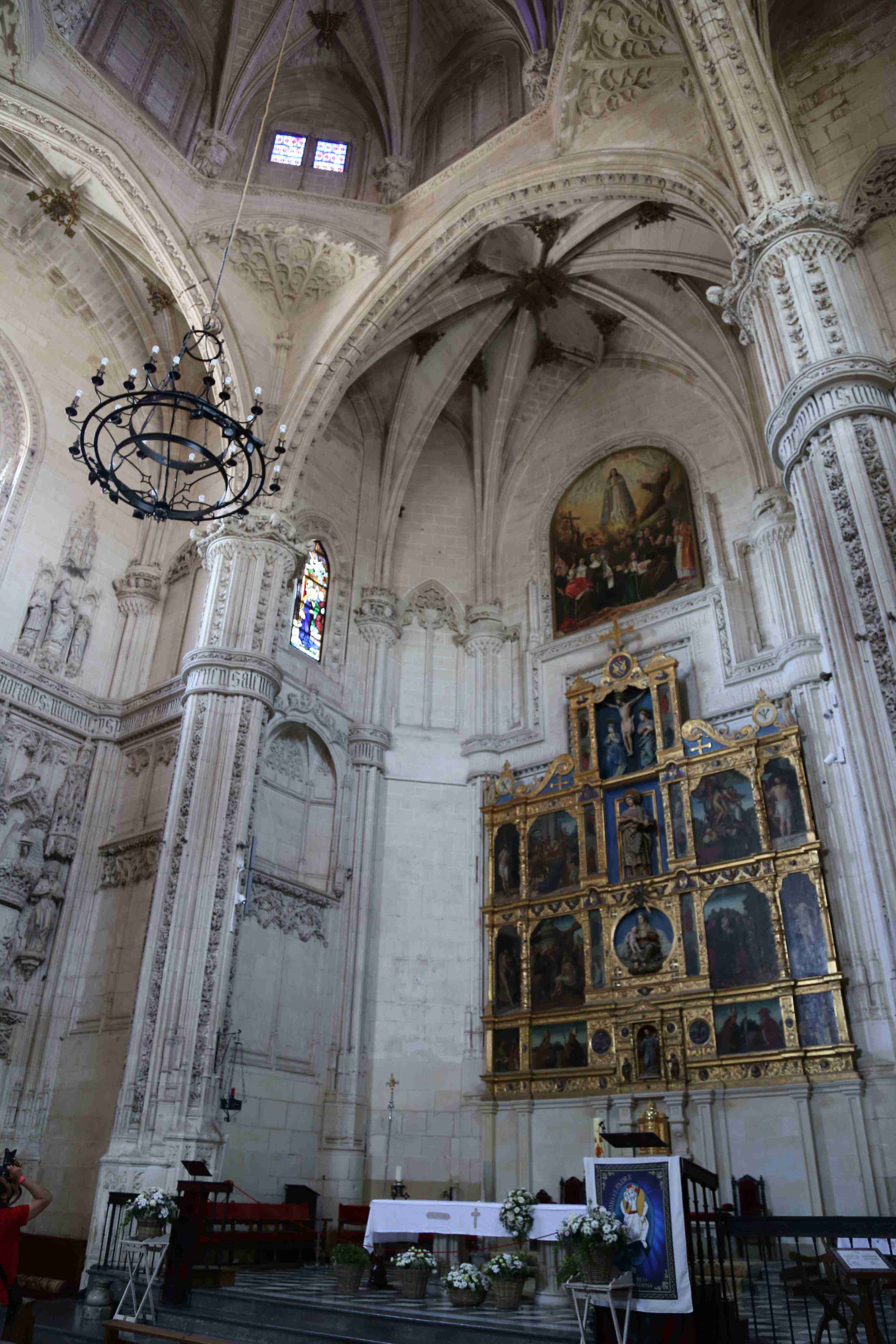 Catholicism was a central part of life during the height of imperial Spain and for a time Toledo was the national capital.

By the mid-500s A.D. Toledo fell under the sway of Visigoths, and in the early 700s A.D. Muslim rulers rose to power (though a Christian element remained). In spite of all these changes and turmoil, Toledo remained renowned for hard steel and skilled sword makers. In fact, as far back as 500 B.C. the city was the waypoint for men seeking a top-quality sword. The quality of the steel being made there was another factor in the Romans locating in Toledo. 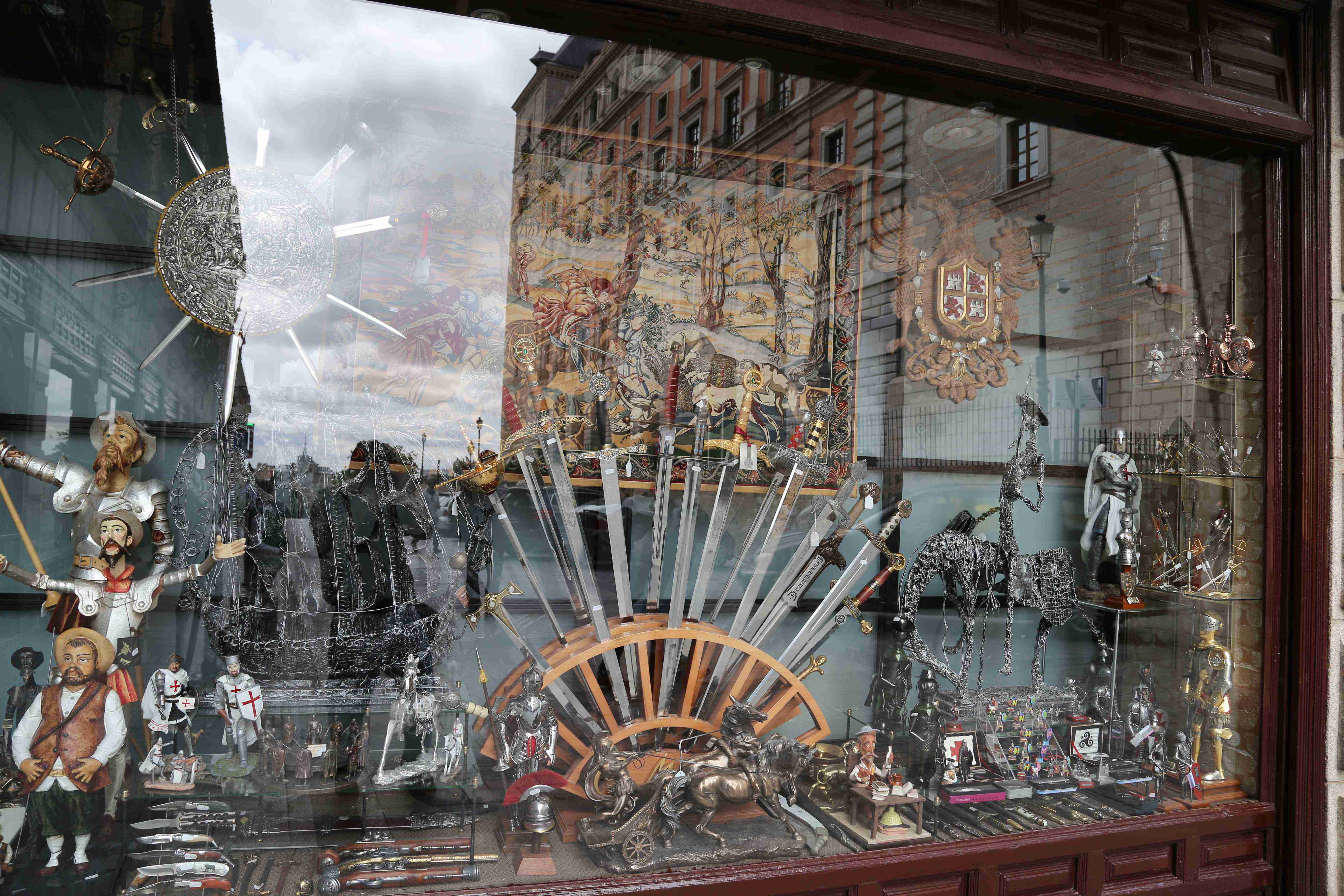 Toledo’s fame was anchored in its renown as the best place in Europe for swords. Today sword making is more of a craft than an industry, where shops like this one display the craftsman’s skills. 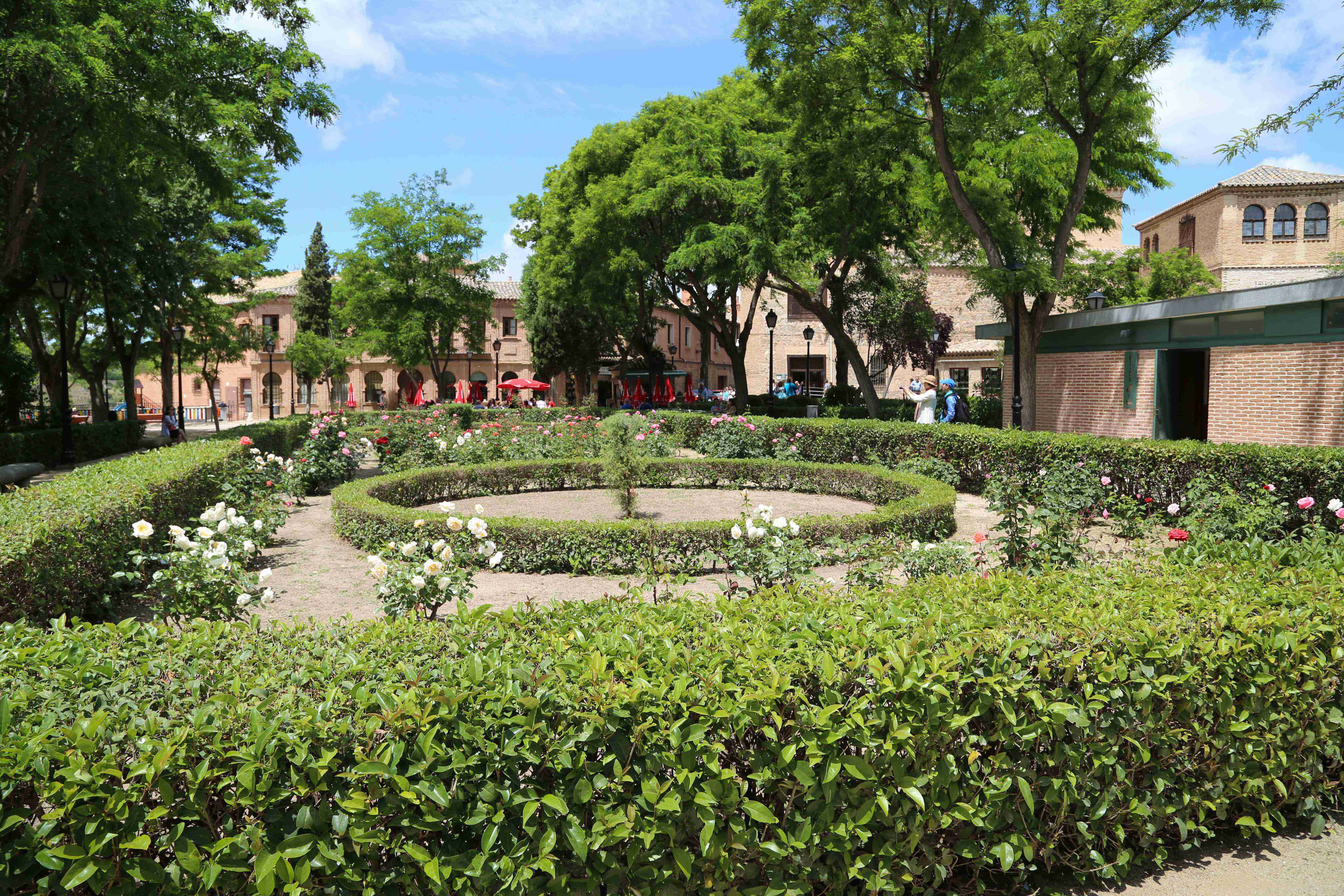 This courtyard provides a place of tranquility.

A critical reason Toledo steel is prized even to this day is that local sword makers figured out how much carbon to add to the iron to make it strong, tough enough to hold a sharp edge, and flexible enough to withstand the rigors of battle. Being able to make fires hot enough to smelt the iron out of the ore and then mix in the right amount of carbon during the forging process added to the complexity of making high quality steel. Getting the raw iron to the right temperature was a skill developed and refined with the understanding of forcing air into the fire to create higher temperatures. Sword making is still carried out in Toledo but these days it is more for nostalgia. 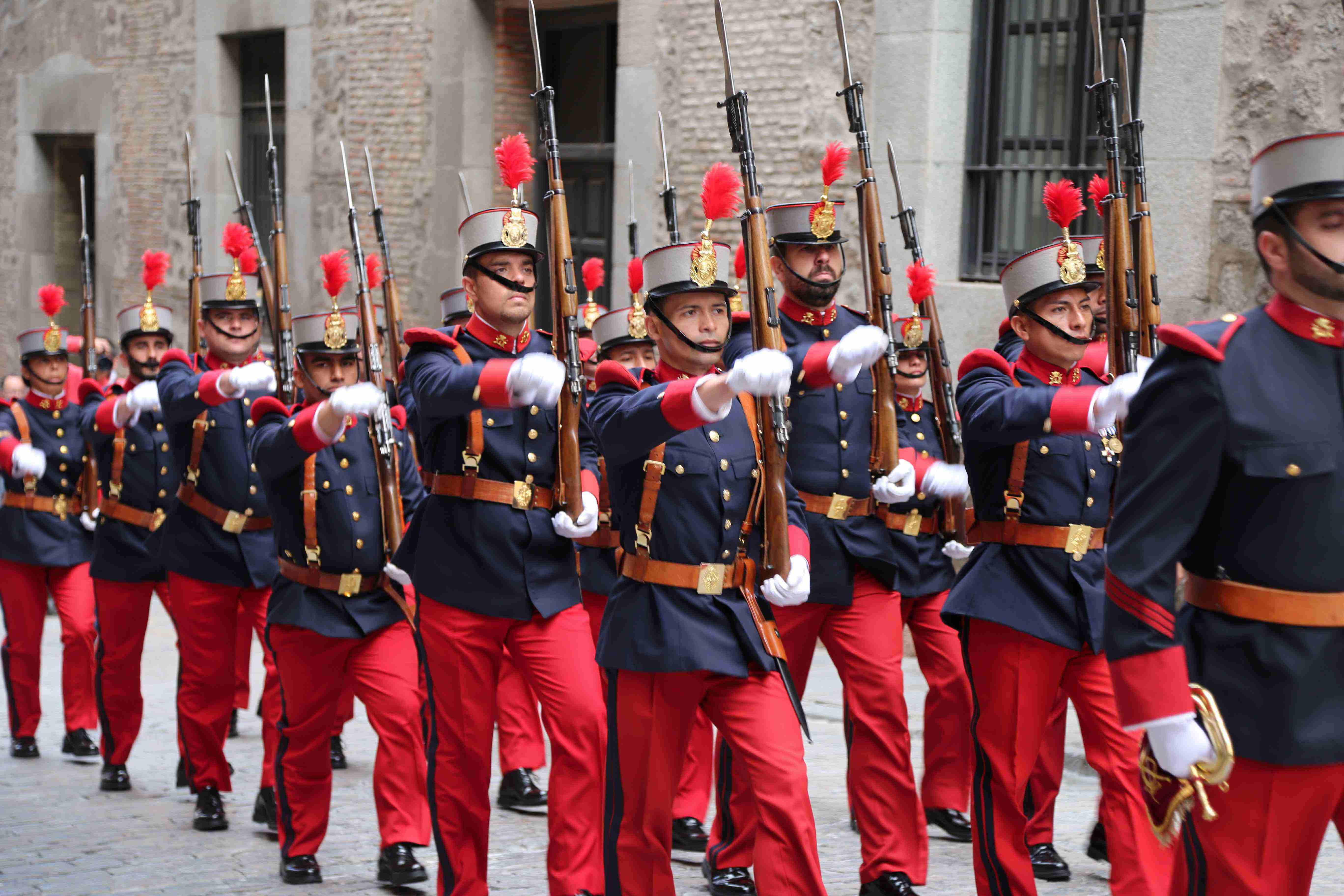 A group of soldiers in ceremonial uniforms march from El Alcazar through the streets of Toledo, Spain. 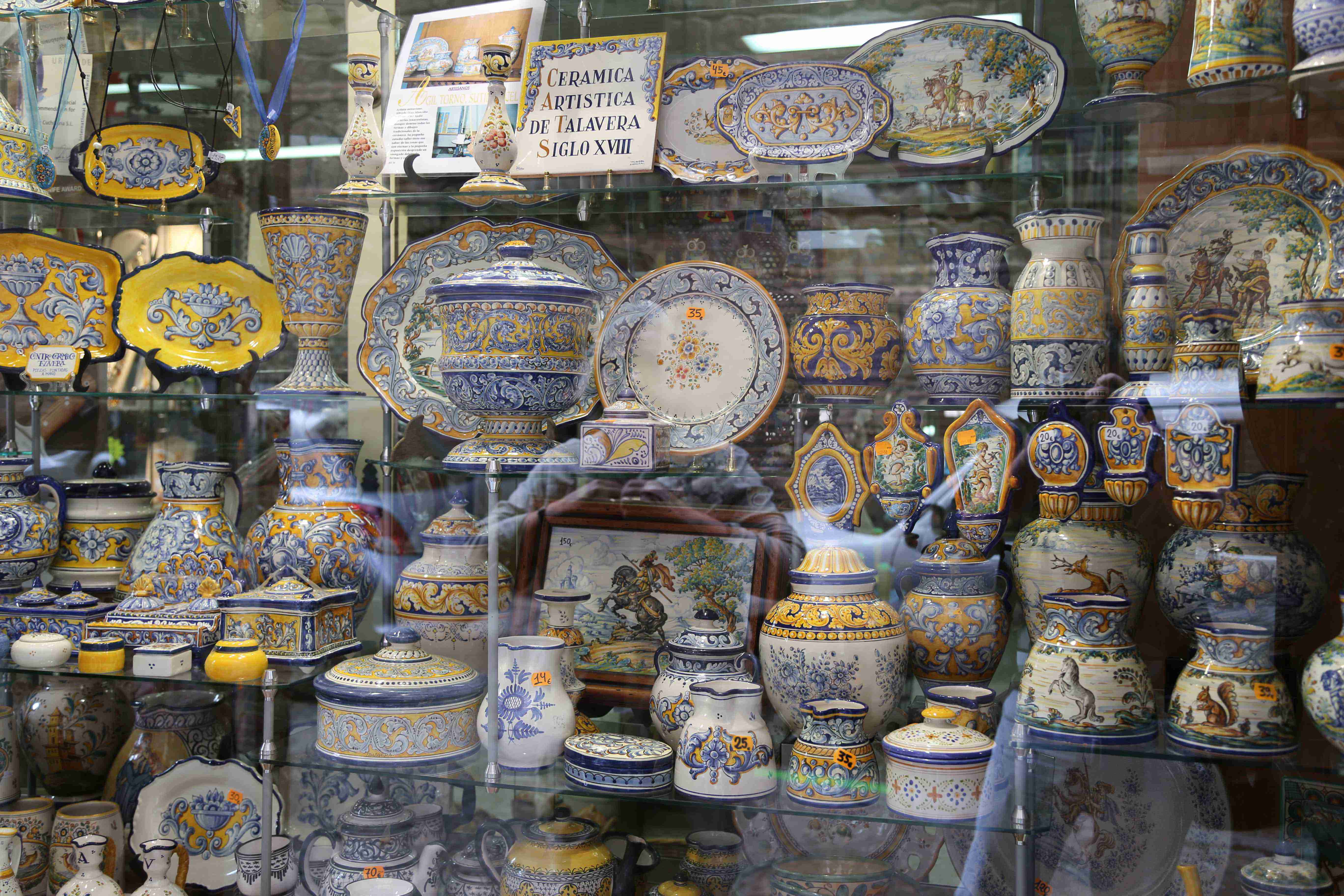 Colorful ceramics are displayed to catch the eyes of the tourists who flock to Toledo.

Centuries ago, Christians who set out on a crusade to take back Jerusalem from the Muslims would stop in Toledo to find their personal Excalibur. But neither the swords nor God would be enough protection, because as history teaches, the Crusades were a disaster for the Christians. It is estimated that as many as 1,000,000 – on both sides – were slaughtered during the nine crusades that dragged on during the nearly 200-year period the fighting continued. 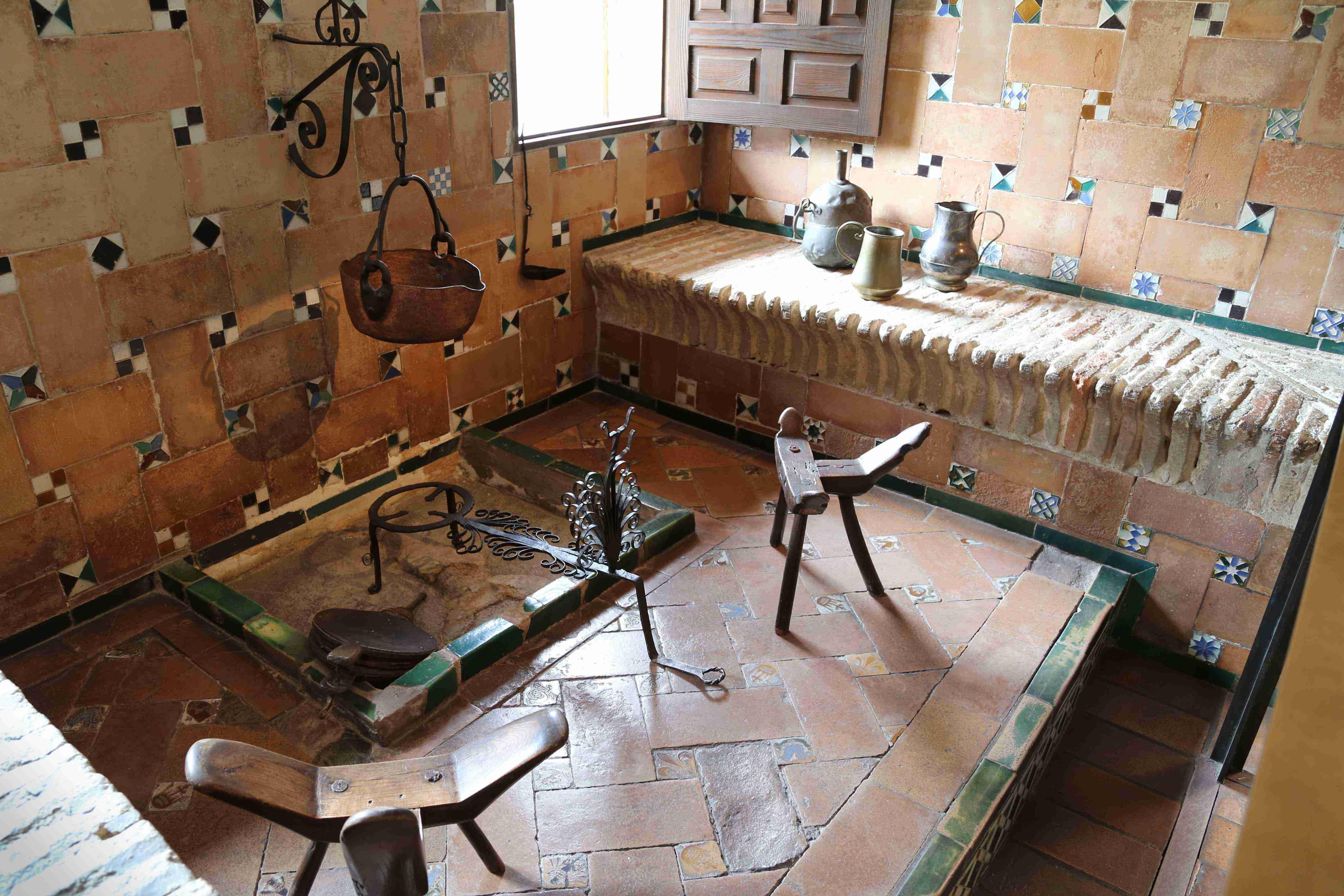 This room was used to prepare meals and would have been similar to that in El Greco’s house which stood nearby. 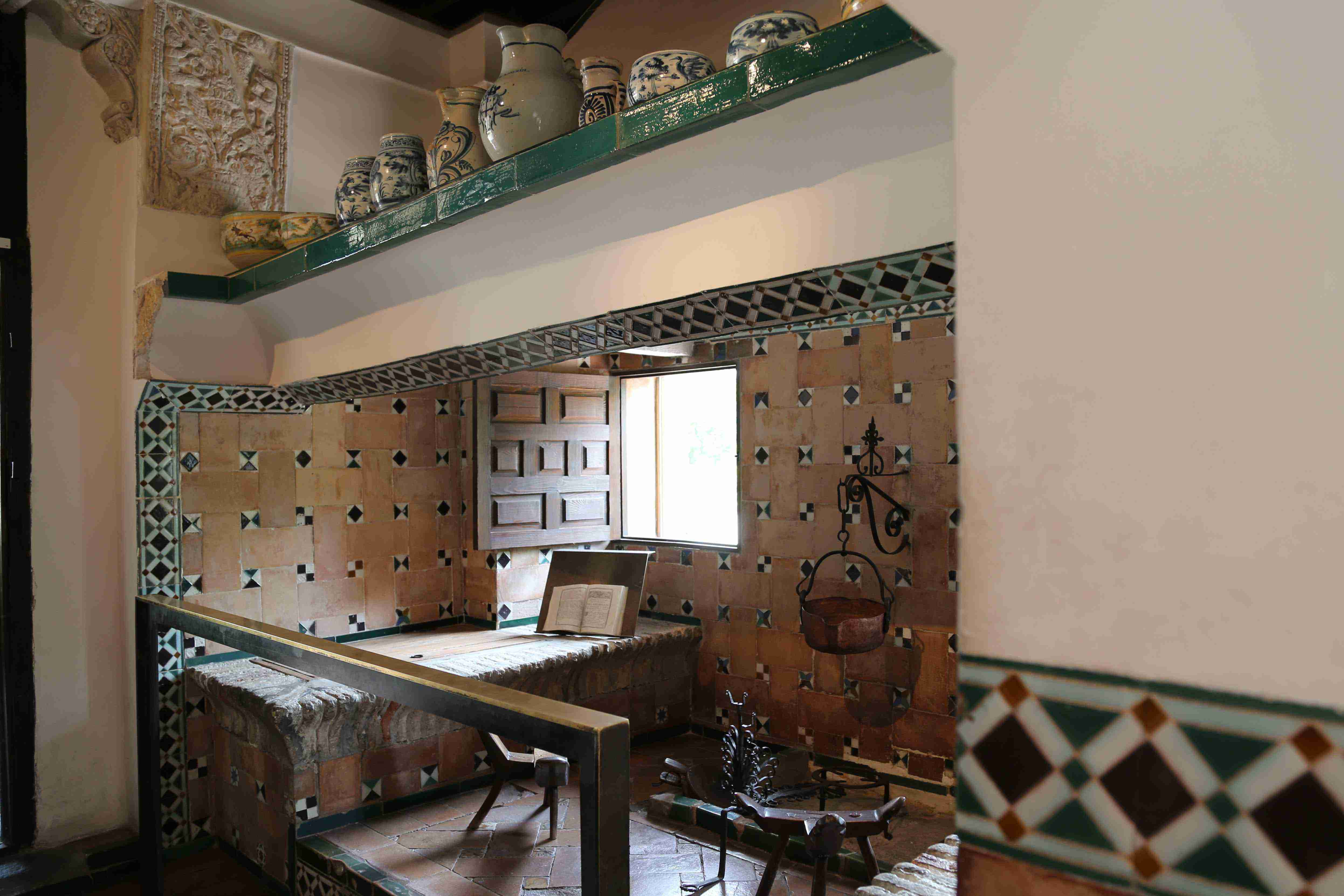 The bright tile and pattern evoke a sense of Moorish influence. 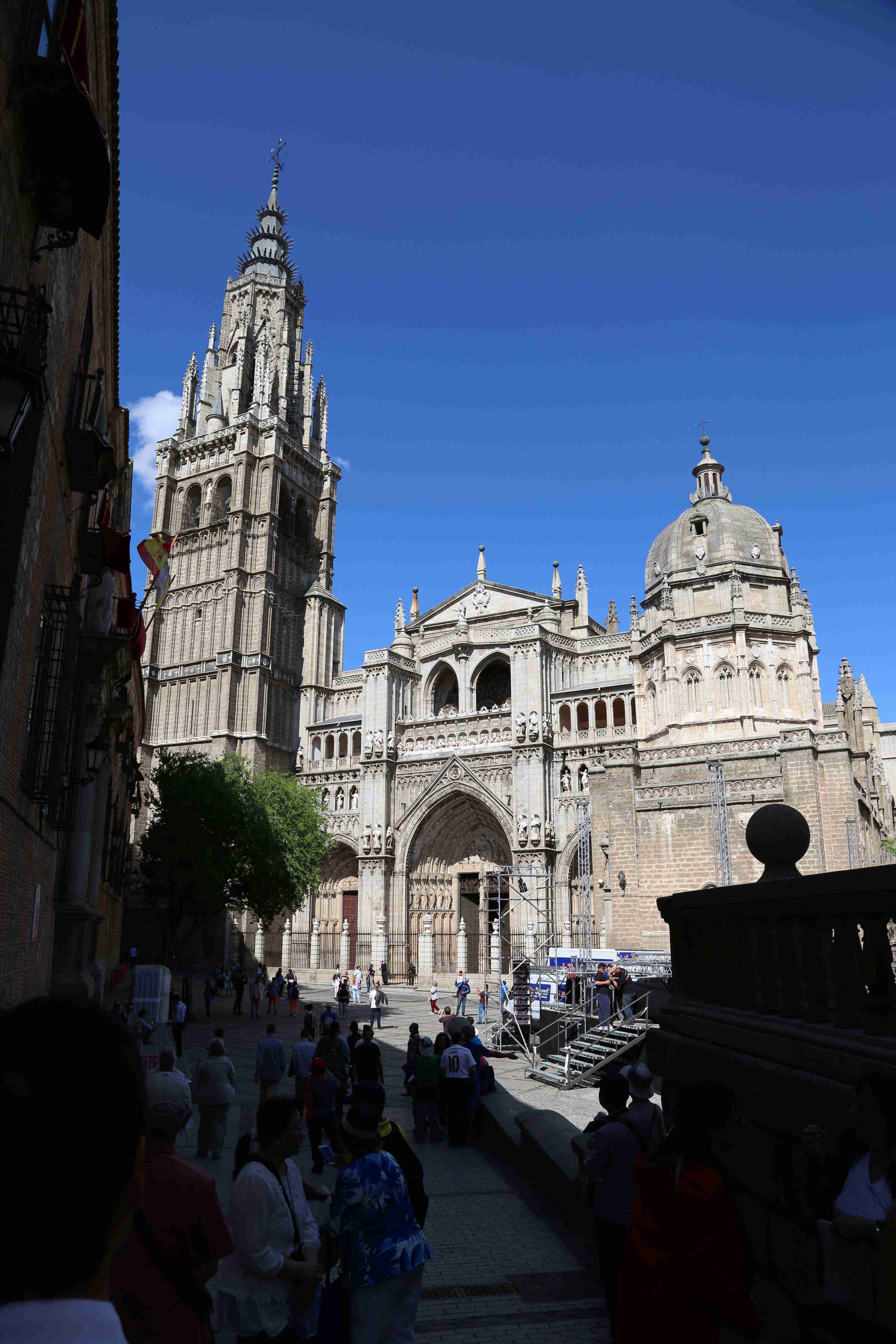 The cornerstone for the cathedral in Toledo, Spain was laid in 1226, but the complex was not completed until 1493. 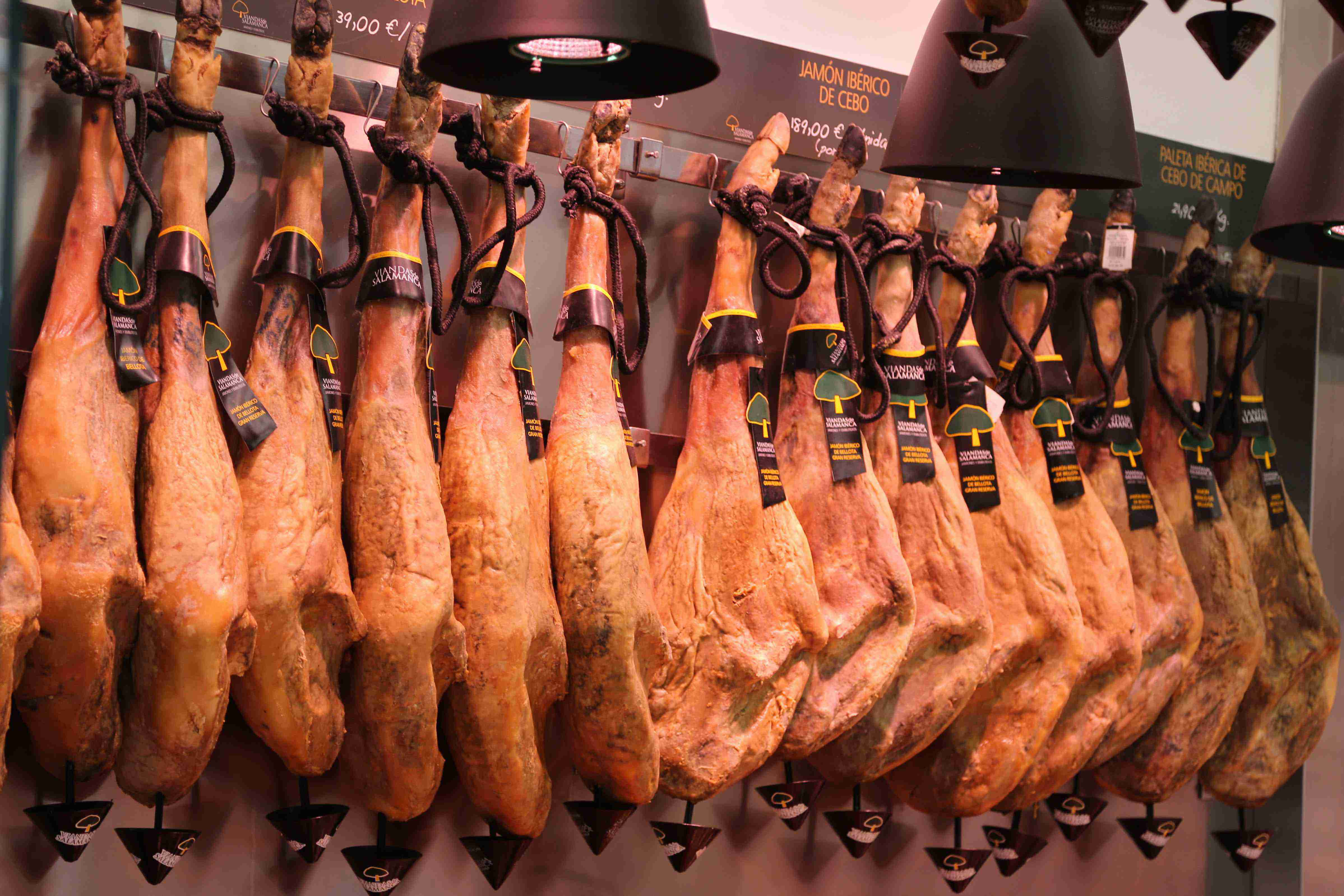 Spanish ham is some of the finest in the world and a number of shops in Toledo keep plenty in stock. The small cups at the bottom are there to catch the occasional drip of fat that might seep out.

As military prowess can define a nation or place, art is another measure of greatness. As circumstance would have it, one of Spain’s greatest painters was not even born there. Doménikos Theotokópoulos was born on the island of Crete and became an artist who studied in Venice and Rome before moving to Spain in 1577. He lived for a time in Madrid and then made his home in Toledo. He remained there until his death in 1614. His given name may well have been more than a mouthful to many so he was simply known as El Greco – the Greek. 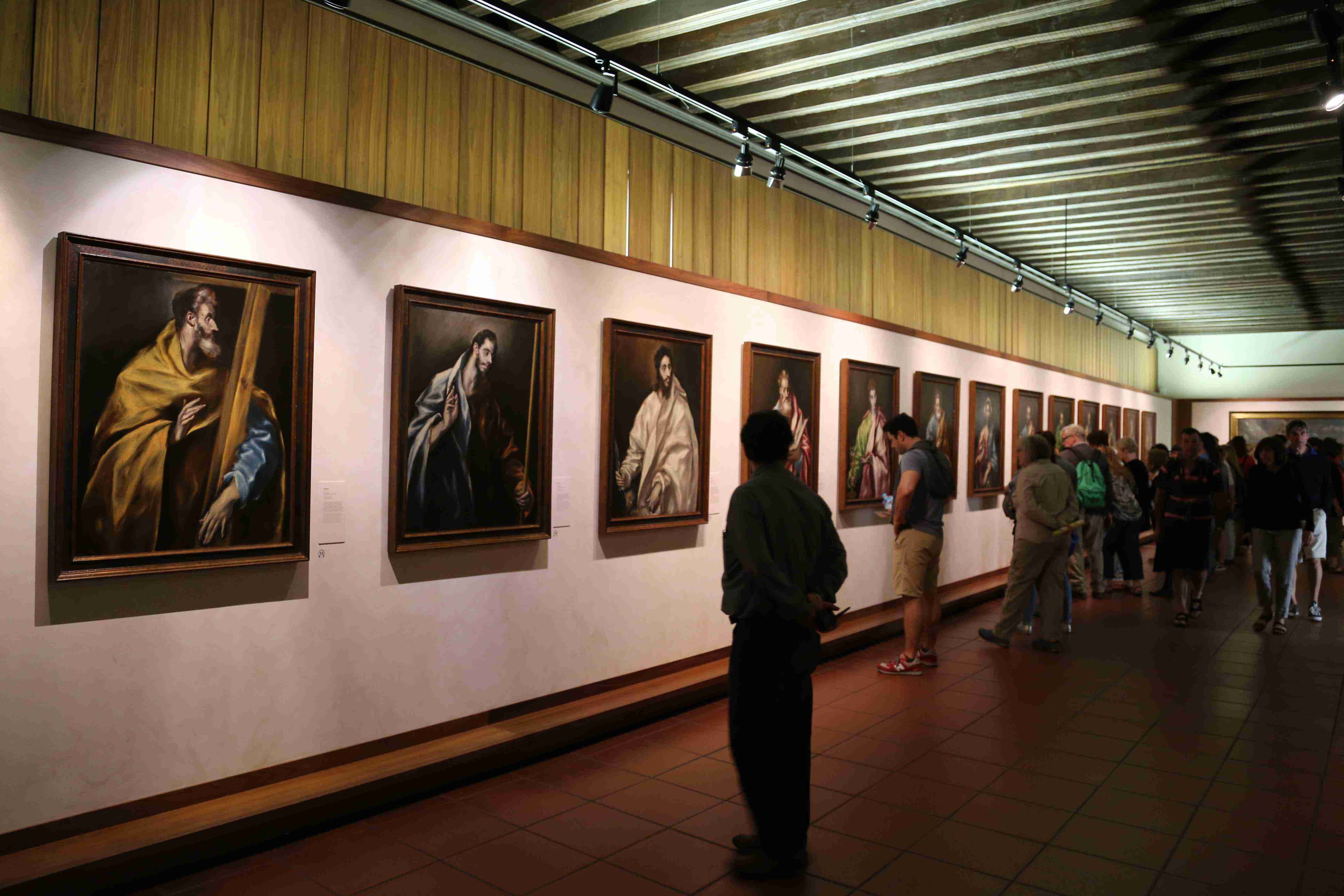 Toledo, Spain has an outstanding collection of paintings by El Greco where visitors can appreciate his unique artistic style.

The works of El Greco are significant for several reasons. Departing from the practice of his time, he believed color was more important than form. And while his art was always appreciated, many of his contemporaries were not quite sure what to make of his work. The characters El Greco painted are often painfully expressive, their features drastically elongated, and often showing a brooding, deeply contemplative emotion. El Greco was also a respected sculptor and architect. Art scholars suggest his work is influenced by Mannerism as well as the Venetian Renaissance. And it is important to note that El Greco’s paintings are believed to have an influence on the development of Cubism and Expressionism. Artistic giants such as Paul Cezanne, Pablo Picasso, and Jackson Pollack, among others, were influenced by El Greco’s powerful work. 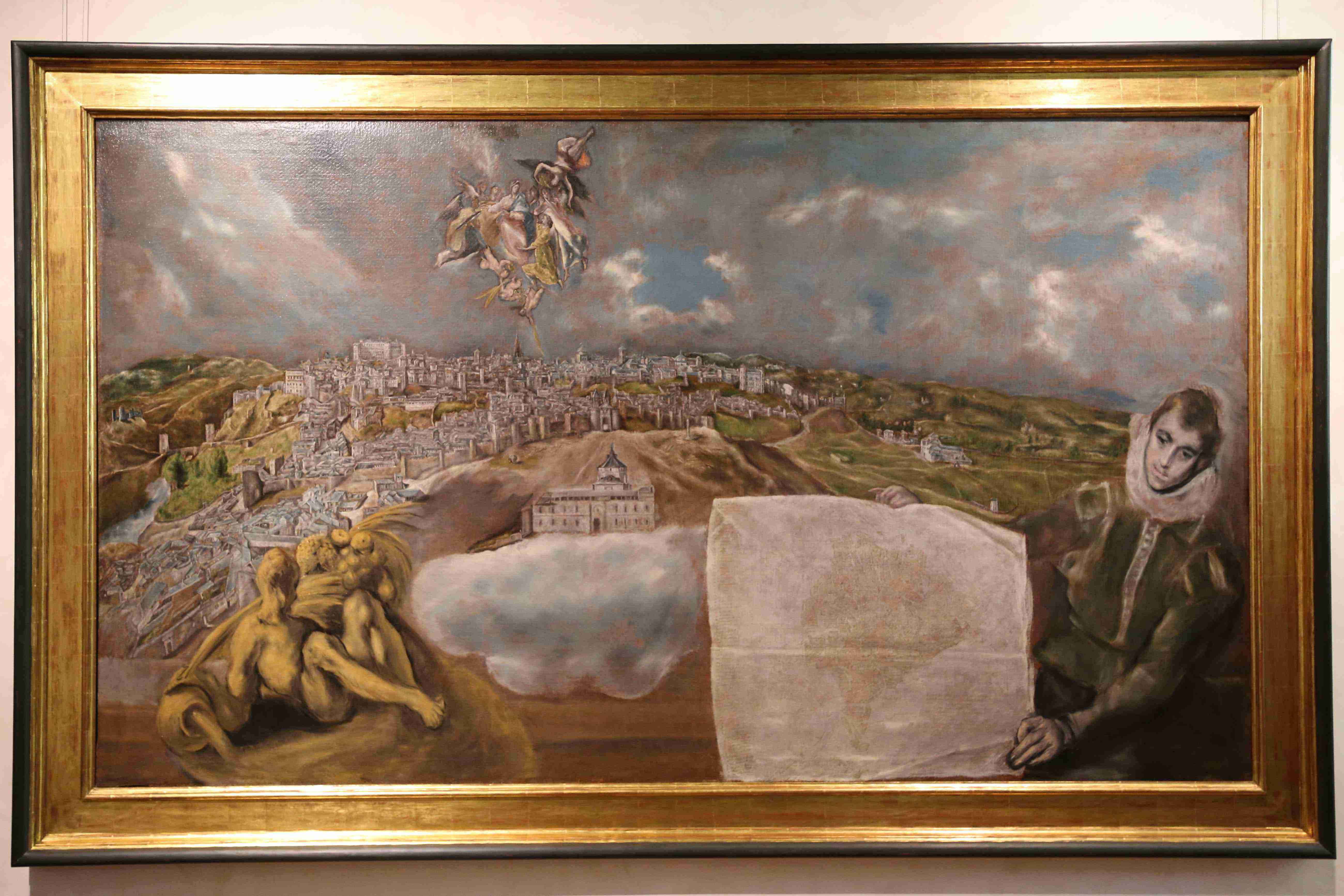 El Greco’s “View and Plan of Toledo” is one of only two surviving landscapes by the master, completed in 1608. 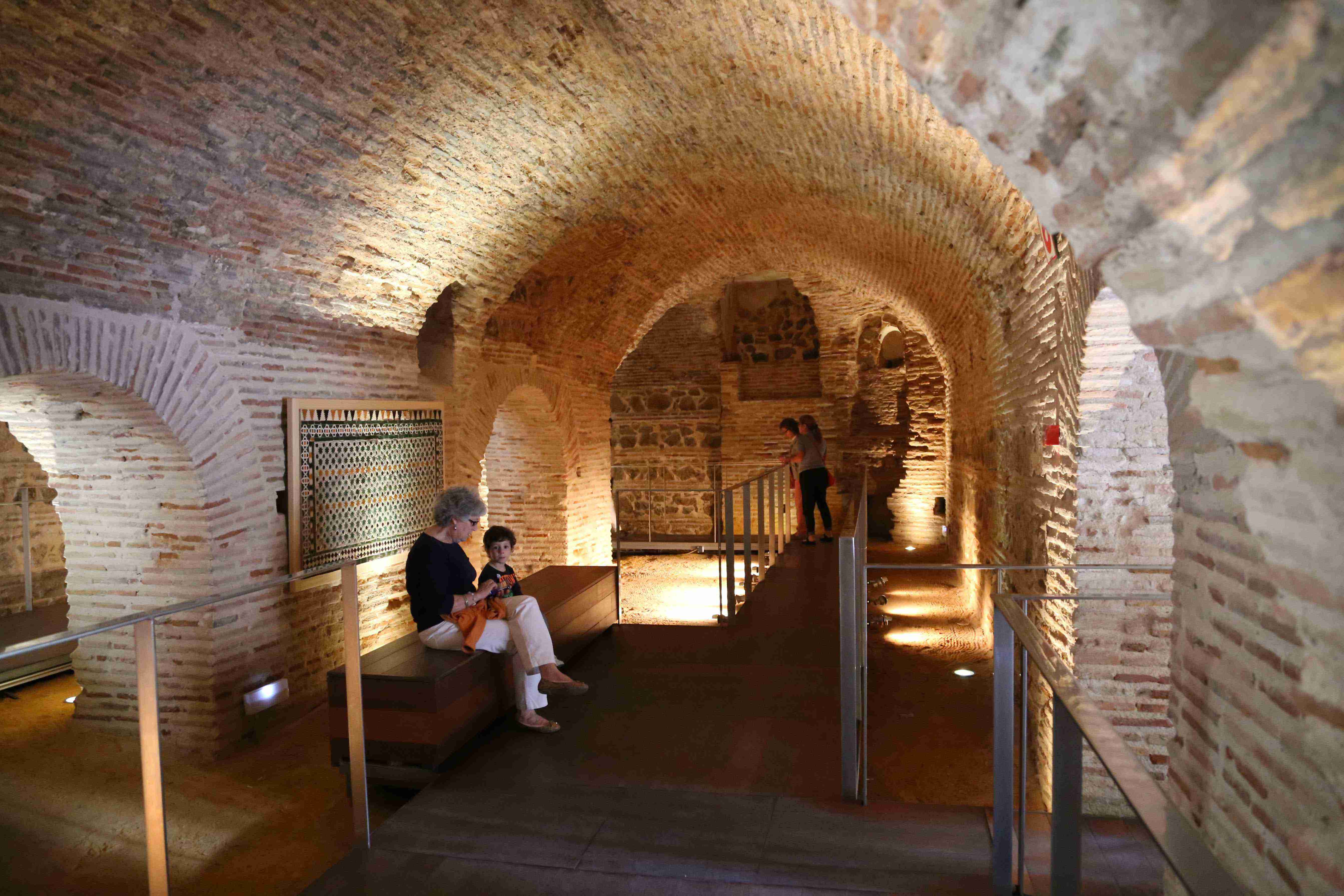 A woman and her grandchild find a cool spot to rest during their travels while other visitors take in more of Toledo’s history. 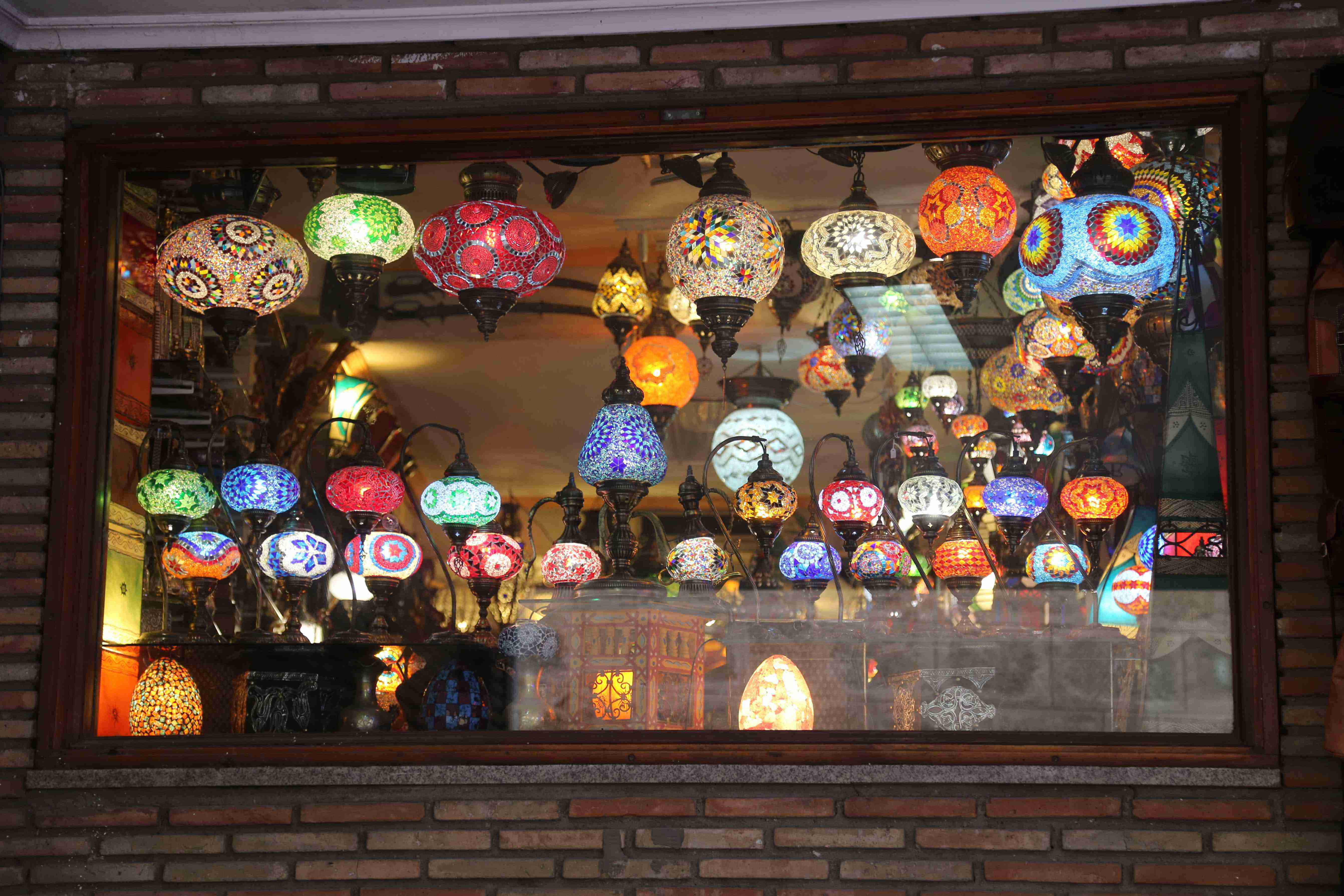 This shop in the old city of Toledo offers brightly-colored lamps for sale. 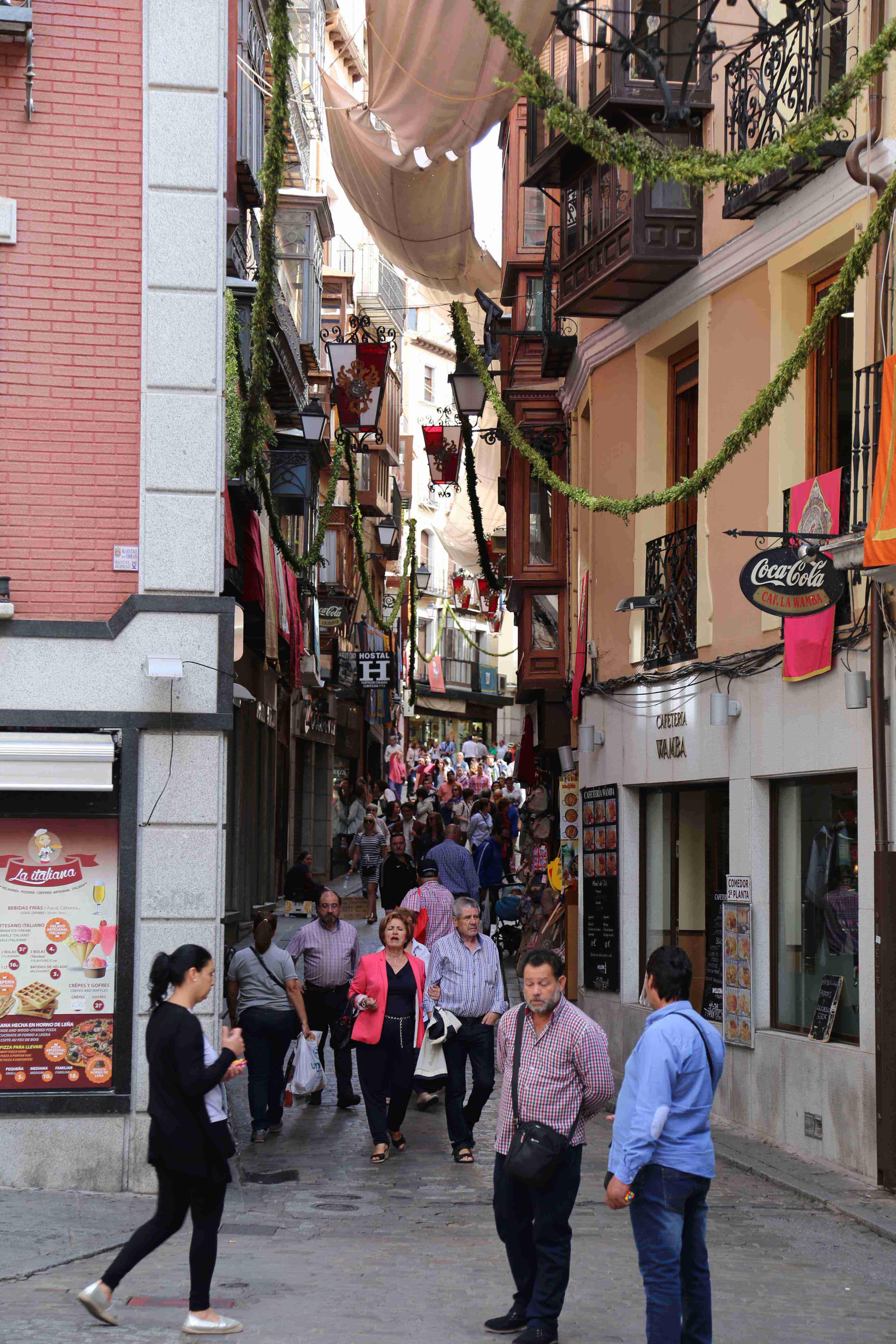 Tourists fill the streets of Toledo, where Christians heading off to the Crusades once roamed.

The old city of Toledo is a warren of wonder with narrow streets and a hilltop dominated by El Alcazar, first built as a home for a wealthy Roman. It was later converted into a castle that is now one of the city’s most notable buildings, along with sacred spaces like the magnificent Cathedral and hauntingly beautiful former mosques and synagogues. One of the old city’s interesting elements are the awnings that run along the narrow streets, providing shade from the hot summer Spanish sun. There are a number of restaurants and shops, including some excellent spots to buy famous melt-in-your-mouth Spanish ham. The cultural and historic significance of Toledo is such that it was named as a UNESCO World Heritage Site in 1986. 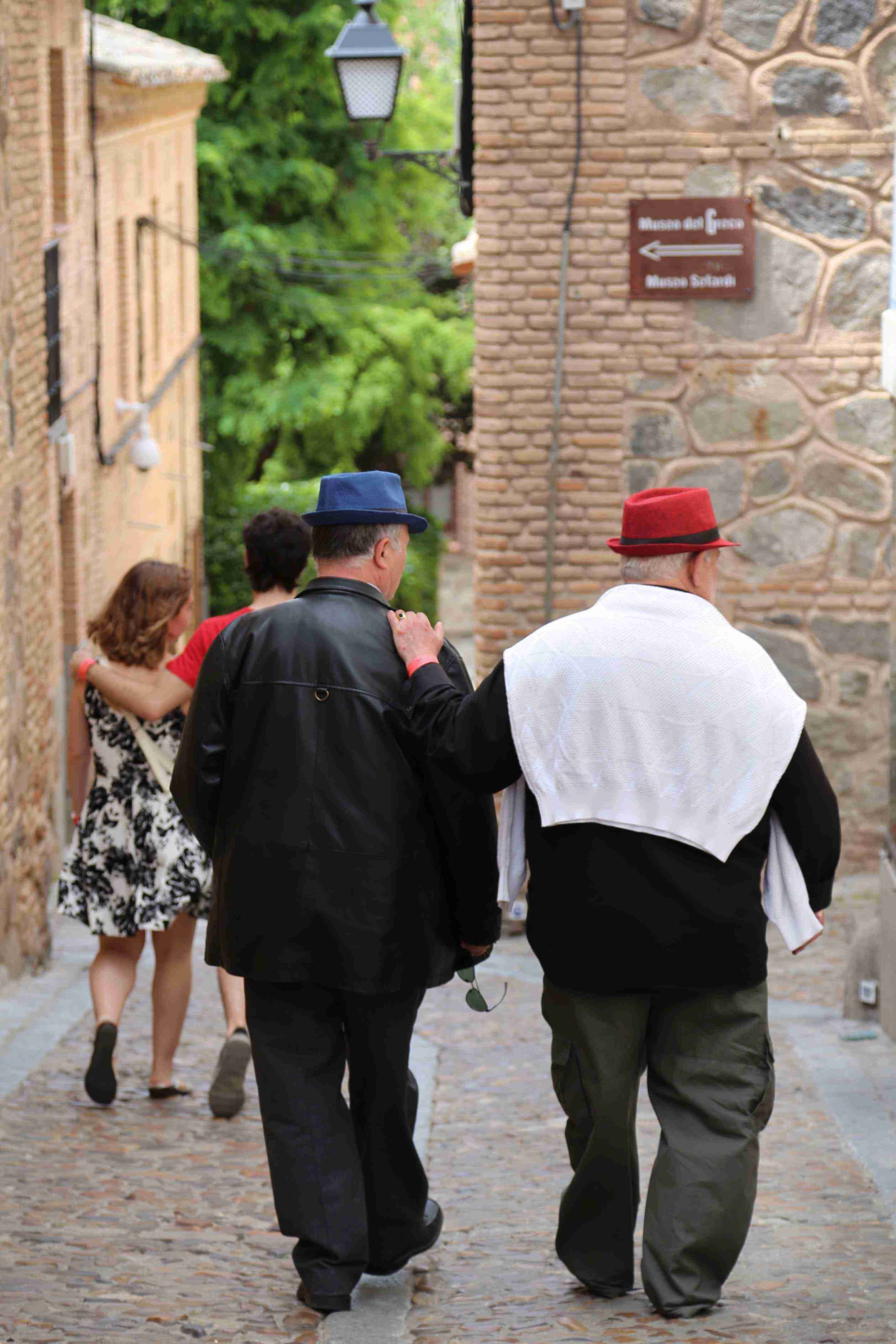 Young lovers and old friends show caring and tenderness during a stroll along the street in the old city of Toledo. 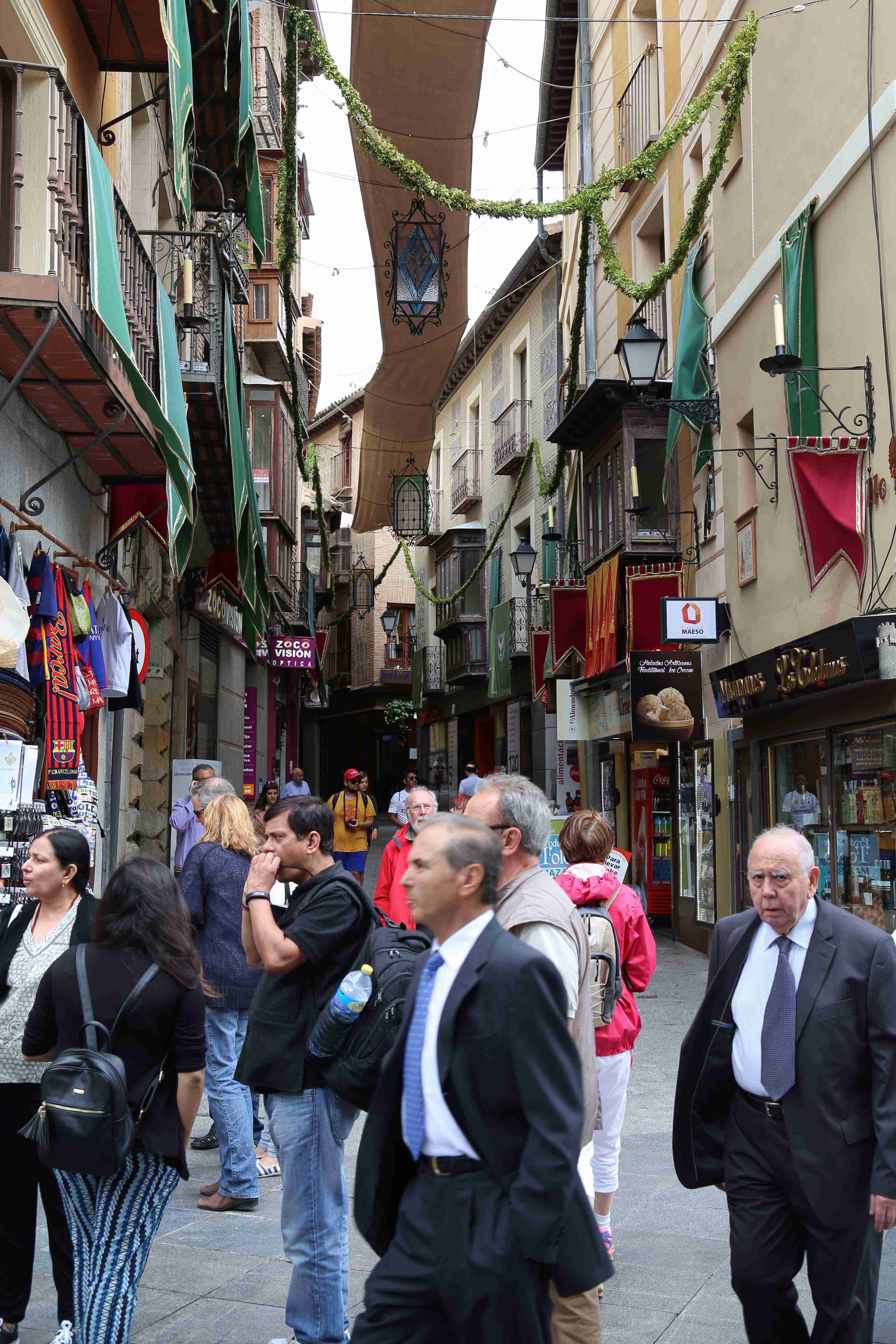 Toledo is a vibrant city where tourists and stylish business people mingle as they all head to their respective destinations. 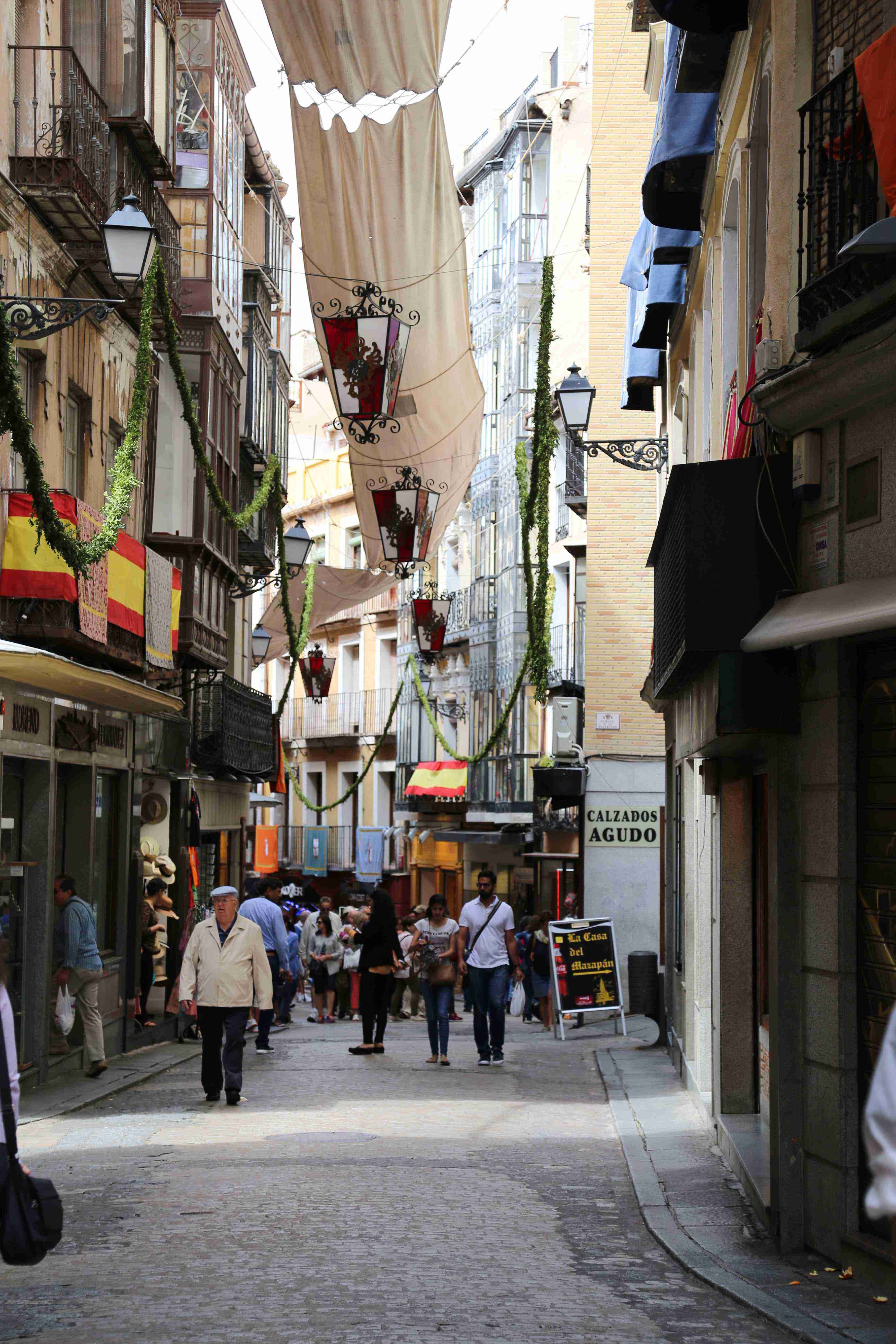 Awnings between the buildings along some of the streets in the old city of Toledo shade the people below from the sweltering summer sun of Spain.

The importance of Toledo’s long history is not to be underestimated, and after even a short visit there you will appreciate the location that made her strong, the steel that made her famous and the artist who built a reputation as one of the finest painters in Spain’s history. 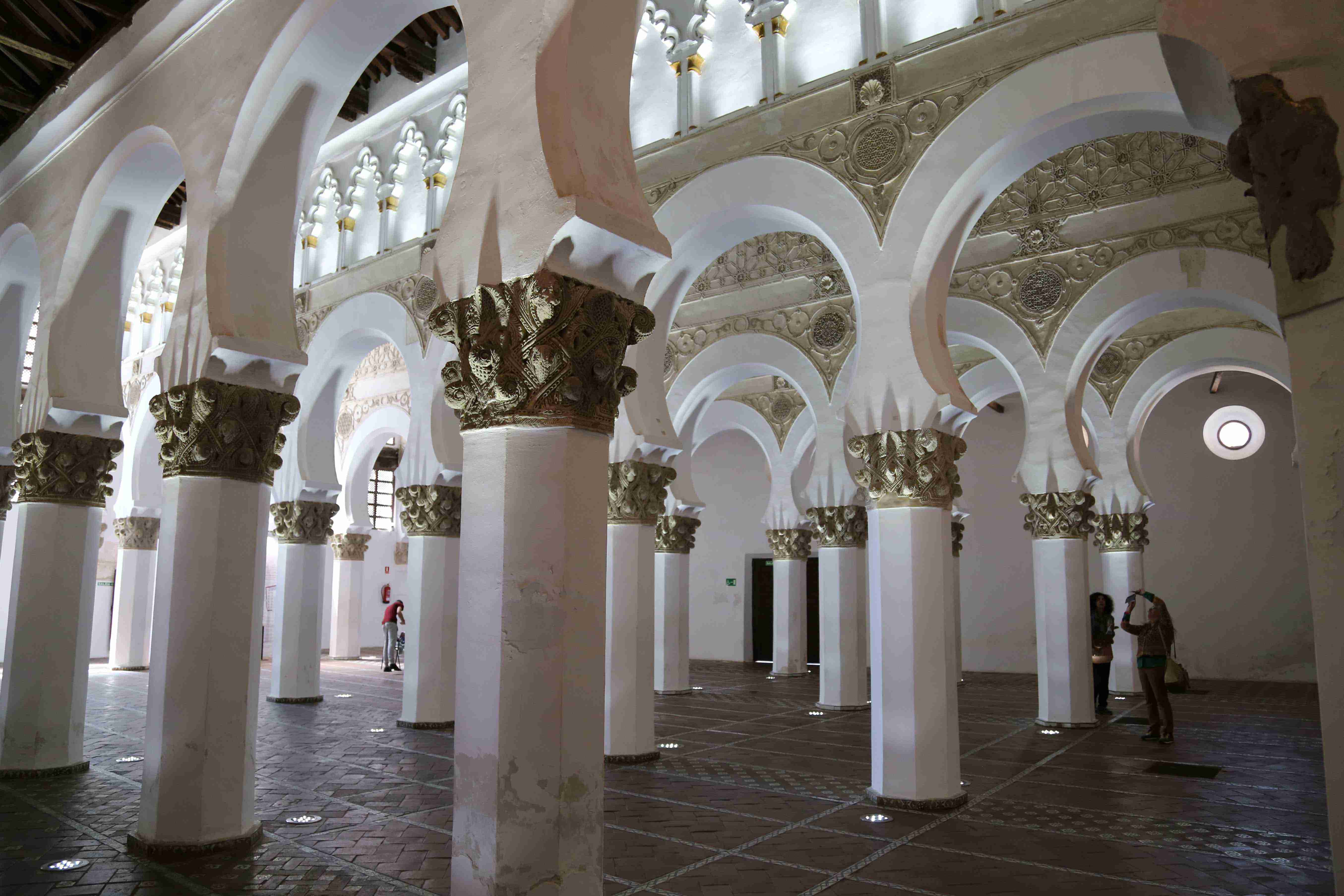 Santa Maria La Blanca has served as a house of worship for Jews and is today owned and operated by Catholics. It was designed by Moorish architects with the idea it would be built for non-Muslim worship. Construction was completed in 1180 A.D. 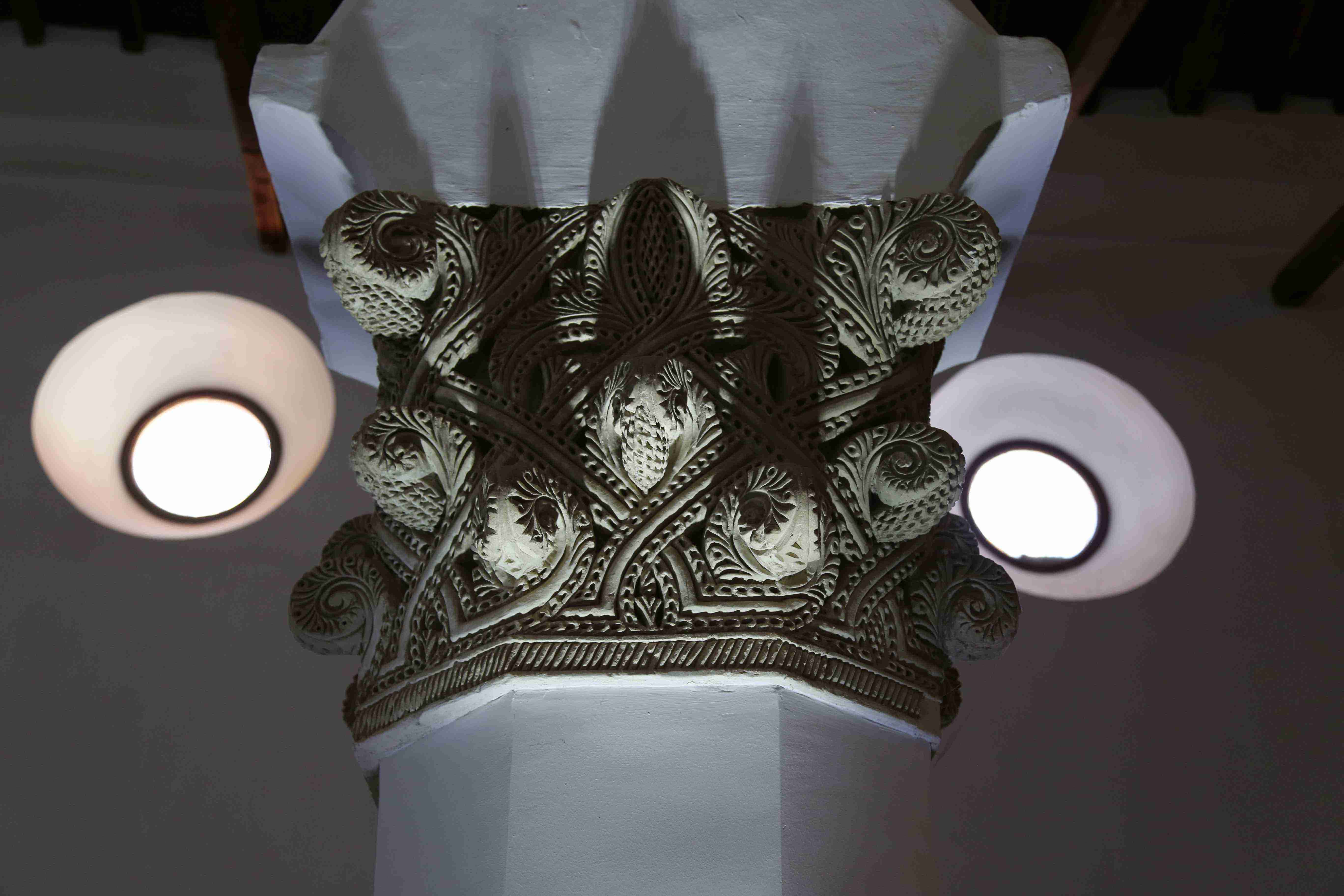 An element of one of the pillars at Santa Maria la Blanca.

For more information about Toledo, click over to these websites: