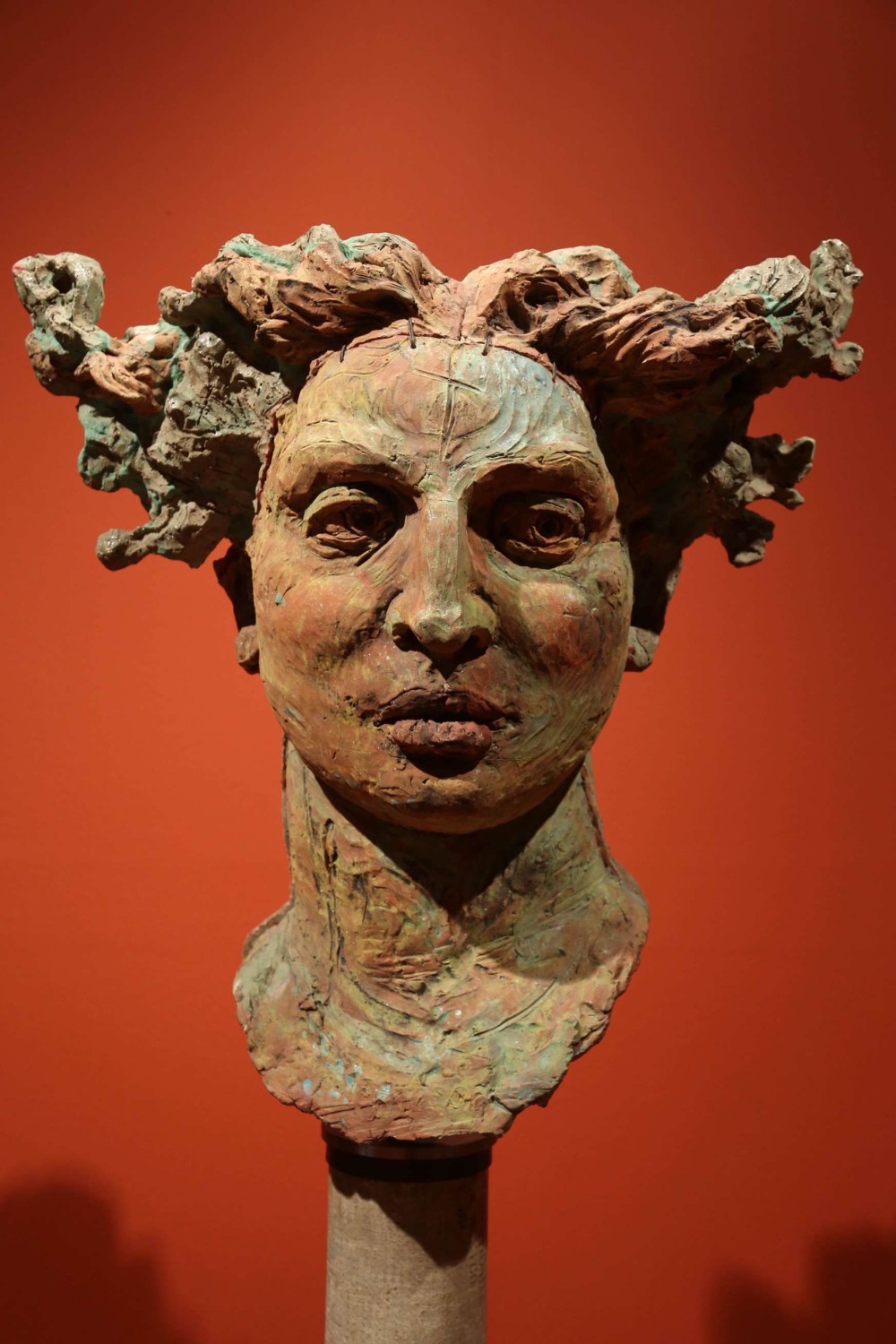 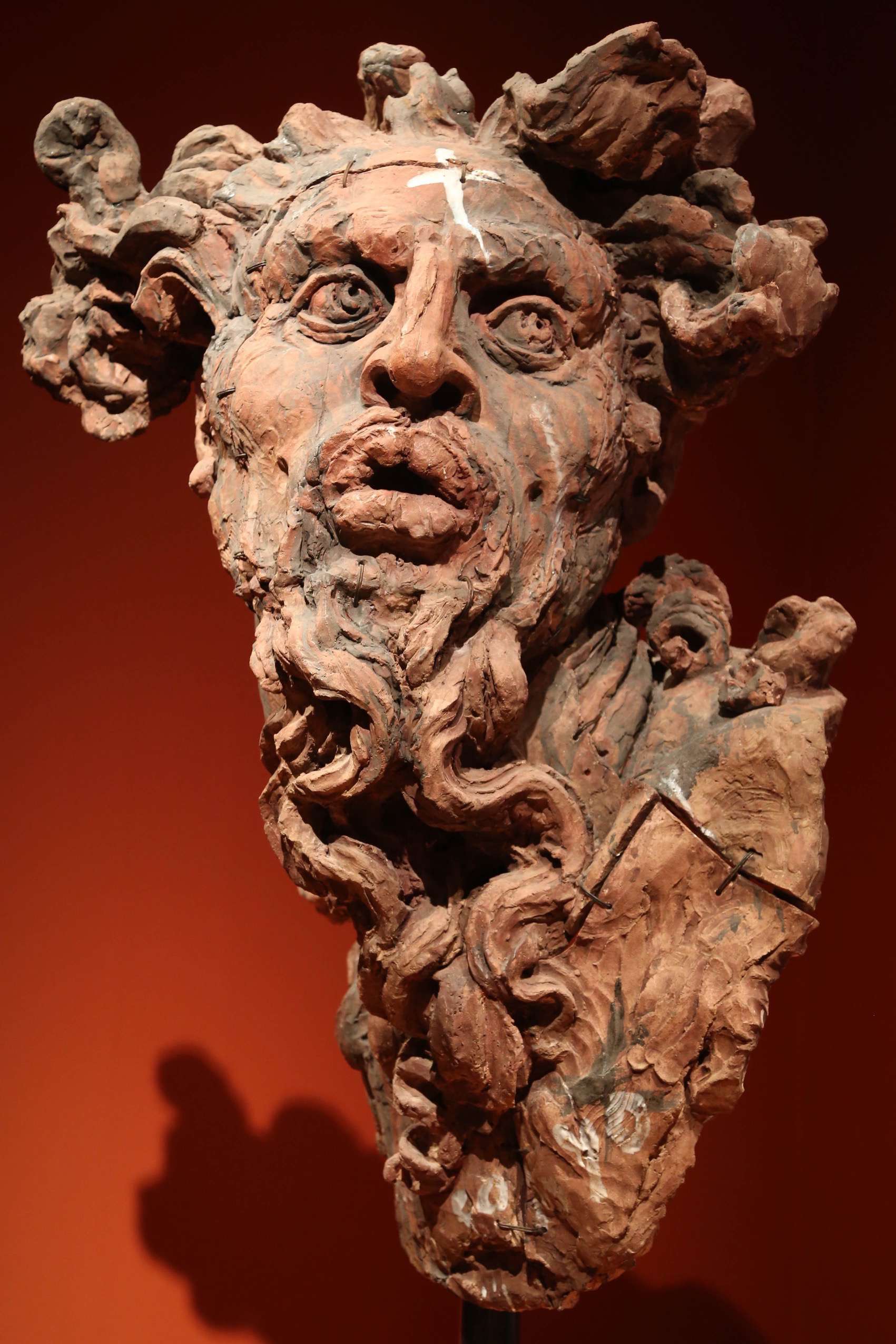 The art of Javier Marin offers a singular vision of the human spirit.

If only one word in the English language described the work of artist brothers Javier and Jorge Marin, it would be audacious. Their larger-than-life sculptures are bold, daring, brave, fearless, original, and without restriction or attachment. When you take in their art with your eyes, you see it with your body, feel it in your soul and you keep turning it over and over in your mind. 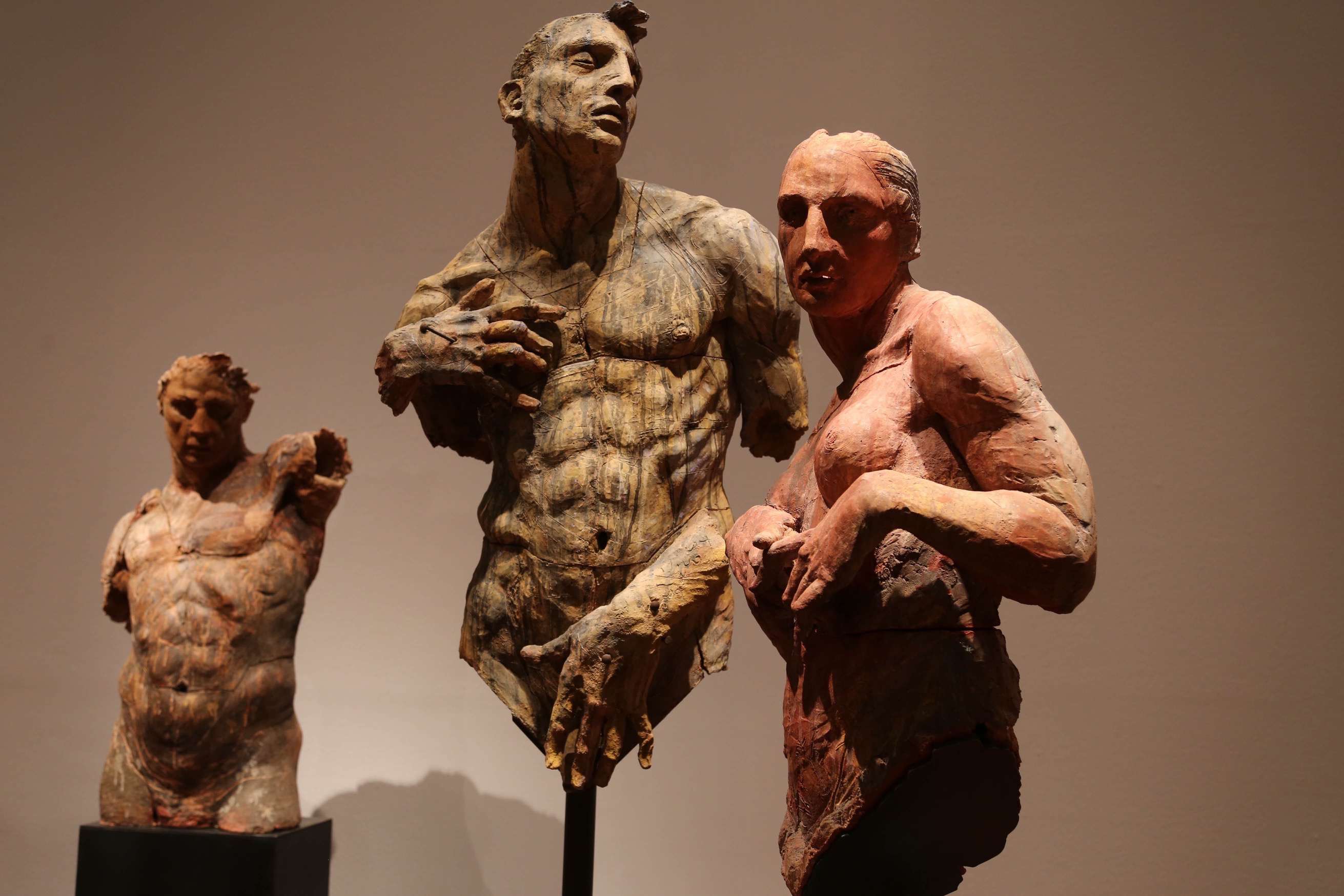 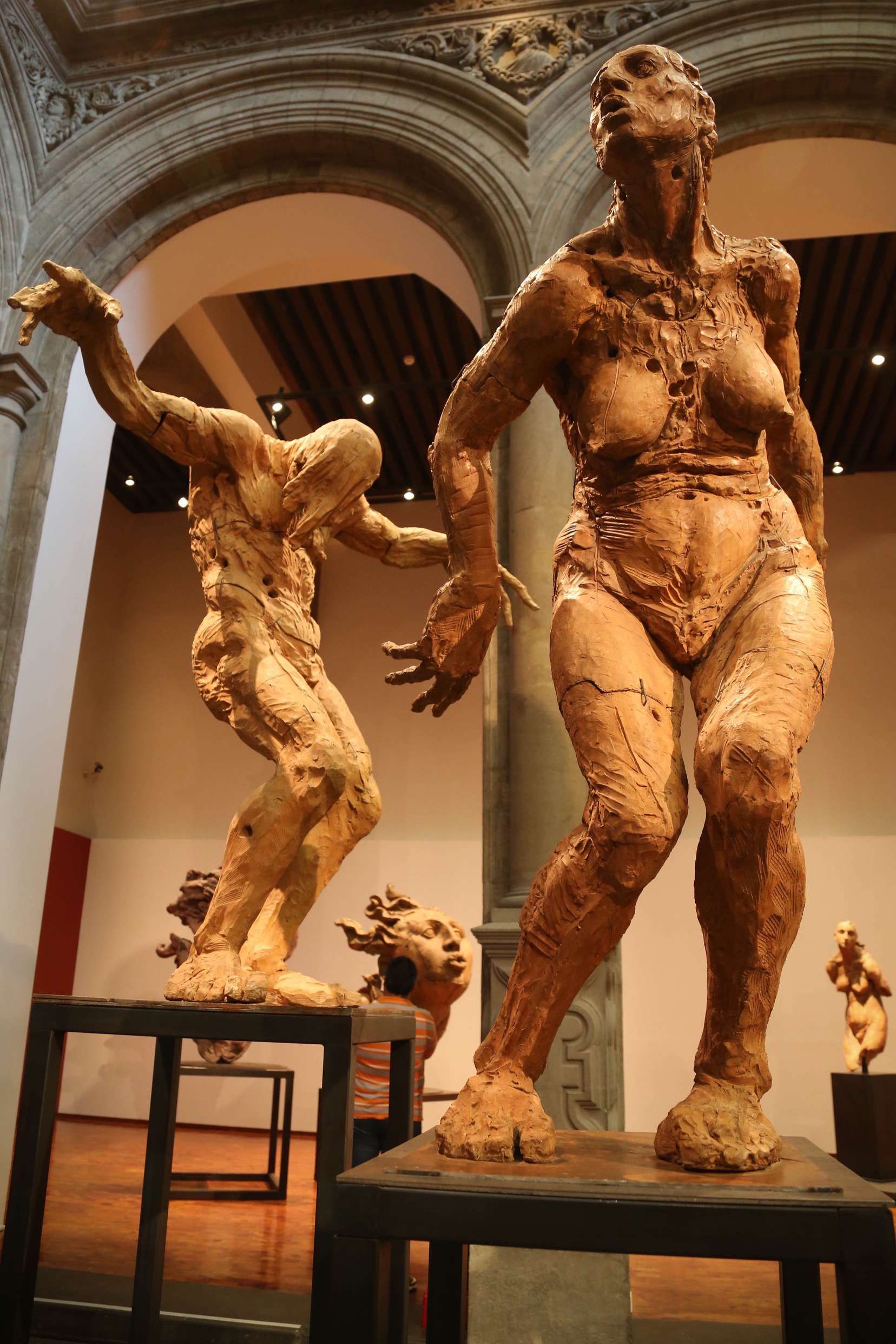 Part of what gives Javier Marin’s sculptures such a lifelike feel is their pose, sometimes awkward, like this pair. The pieces are purposely disfigured with indentations and slashes. 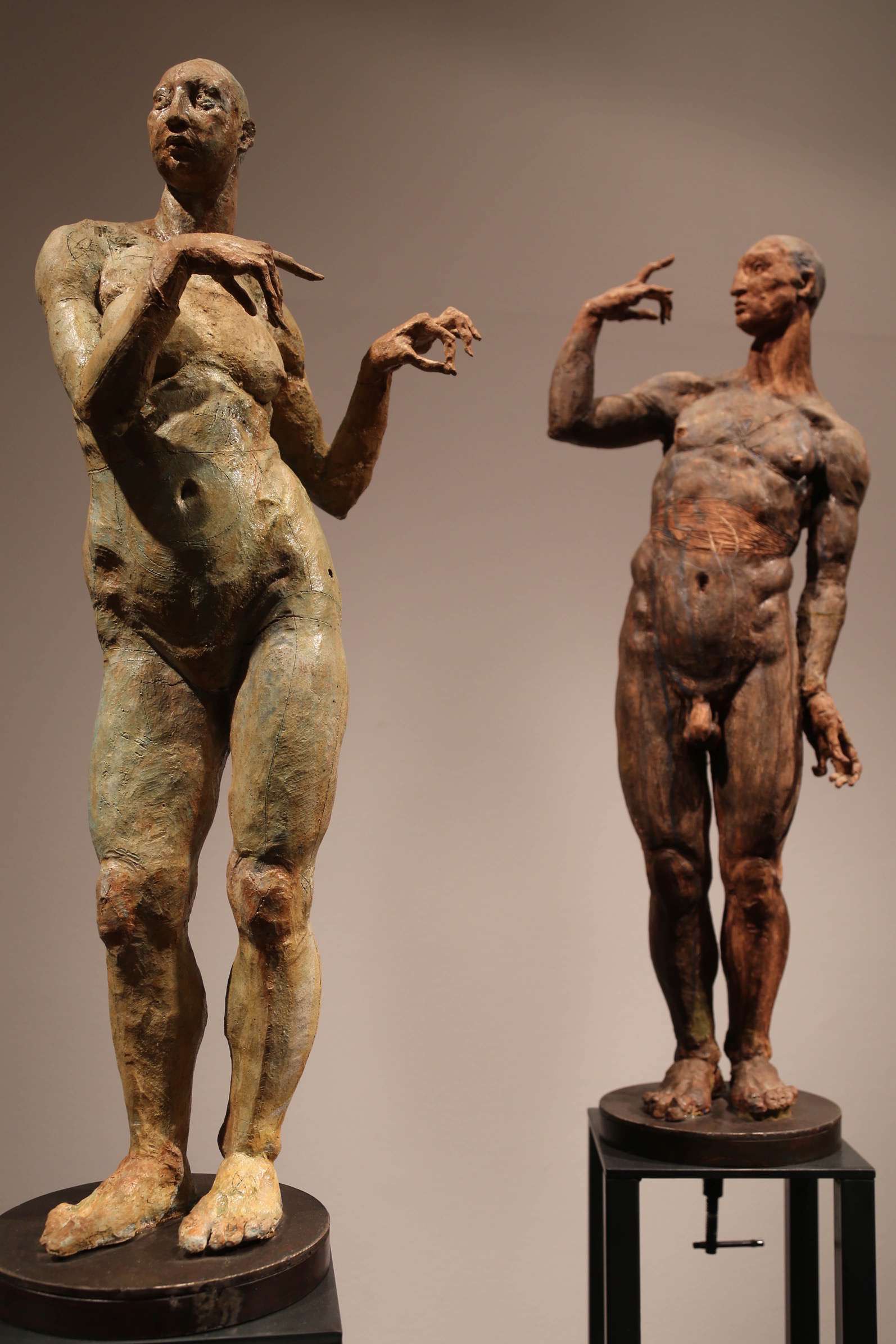 This pair by Javier Marin appear to be interacting with each other.

Even a jaded “lover” of art will stop in their tracks when first seeing a piece by either one of these artists, because the viewer is compelled to look and stare, as if seeing great art for the first time. To be clear, while they are colleagues, the brothers work independently, do not collaborate and do not show their work together. Even though there is a kinship of style in some of their work, each is a distinctive artist by himself. 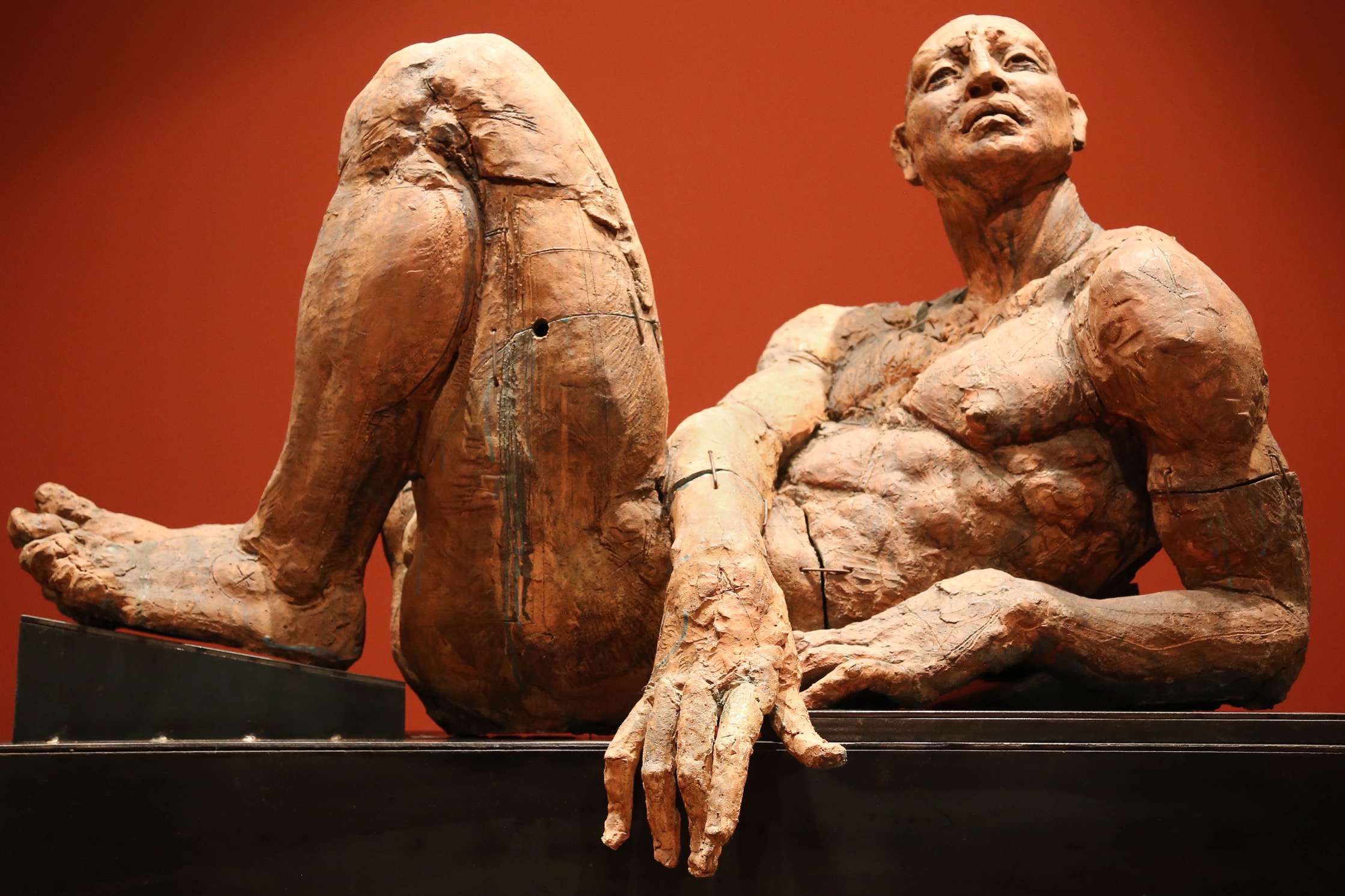 The larger-then-life human figures sculpted by Javier Marin has a life force emanating from within. 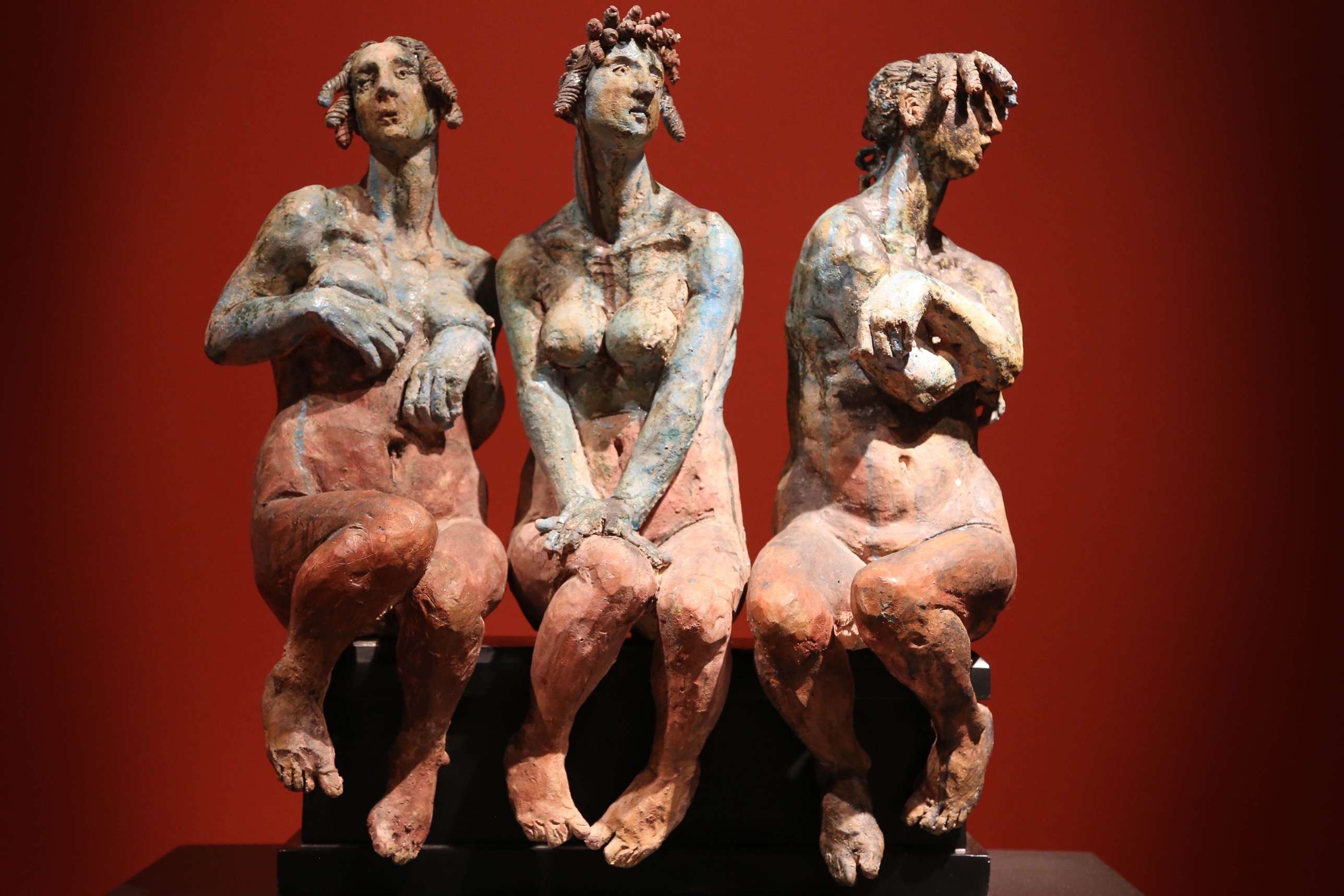 Javier Marin contorts the human form and stretches proportions, but with a control that maintains their humanity. 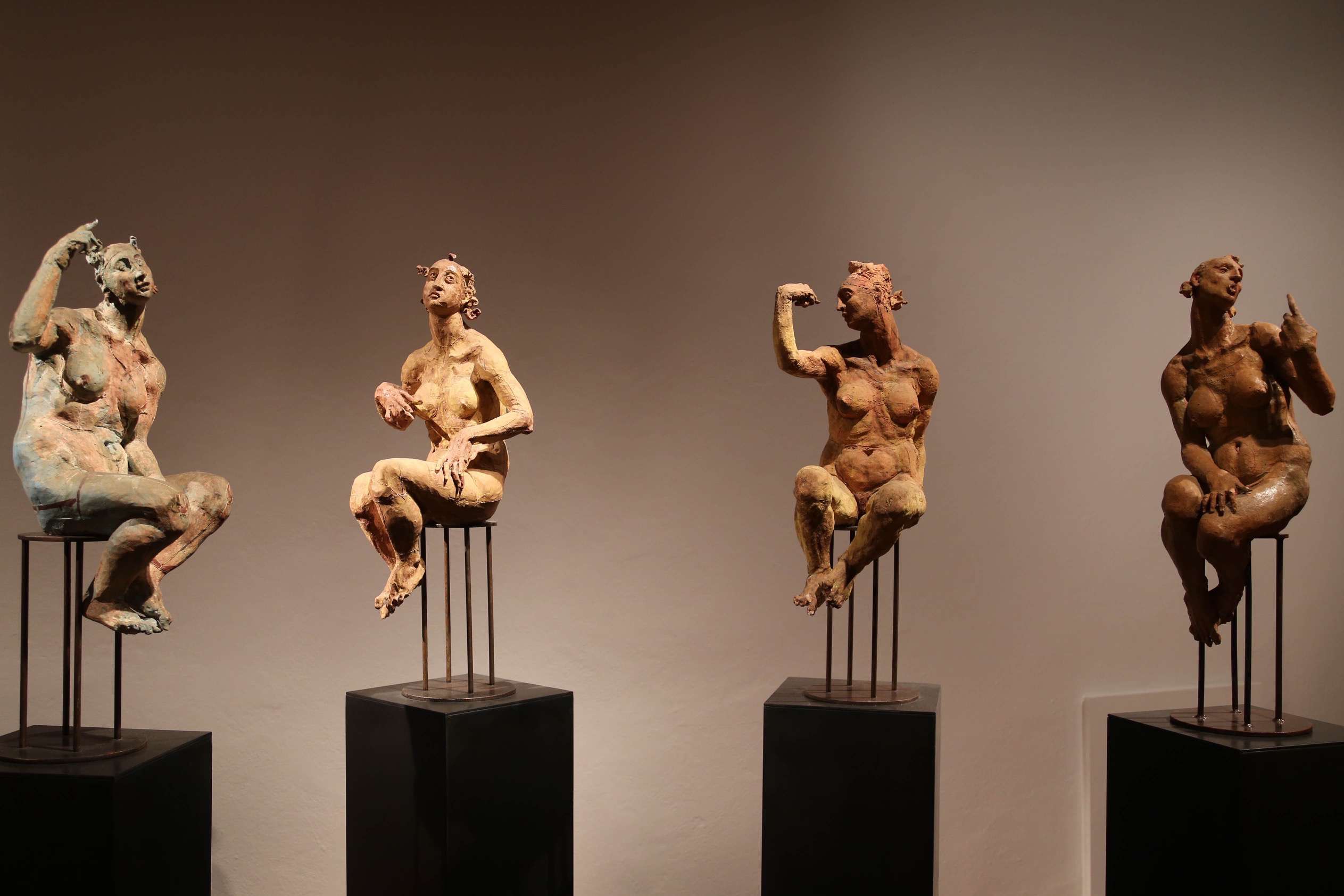 A gathering of pieces by Javier Marin looks like people seated, talking with each other.

The brothers have eight siblings and were born in Uruapan in the Mexican state of Michoacán. But Javier and Jorge are not the only artistic members of the family, with other siblings who are artists, sculptors, painters, photographers and an architect. Interestingly, the siblings do not discuss “business” when they are together. Javier was born in 1962 and Jorge a year later (and is the youngest of the siblings). Both brothers attended the National Autonomous University of Mexico, Javier in San Carlos and Jorge in Mexico City and both presently call Mexico City home. 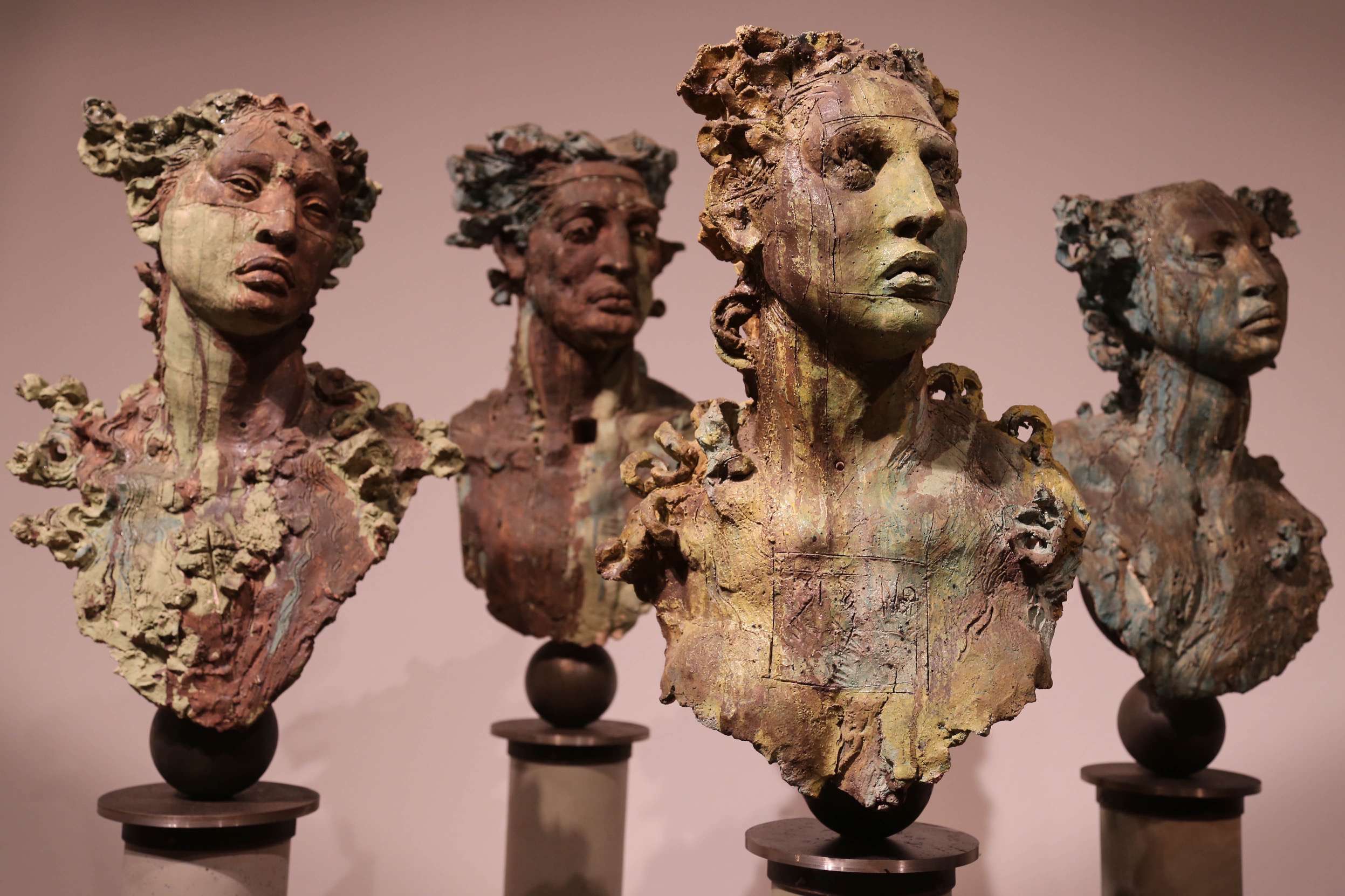 The figures and busts sculpted by Javier Marin take on a sense of being alive, as though they are about to say something. The scoring, or cutting into the surface on many of his pieces is intentional, Javier Marin explained.

The brothers have worked in ceramic as well as bronze. More recently, Javier has evolved beyond traditional material such as bronze and is creating pieces using resin, mixed with other materials, to give each piece of work the look and texture of ceramic. Jorge is best known for creating sculptures in bronze. 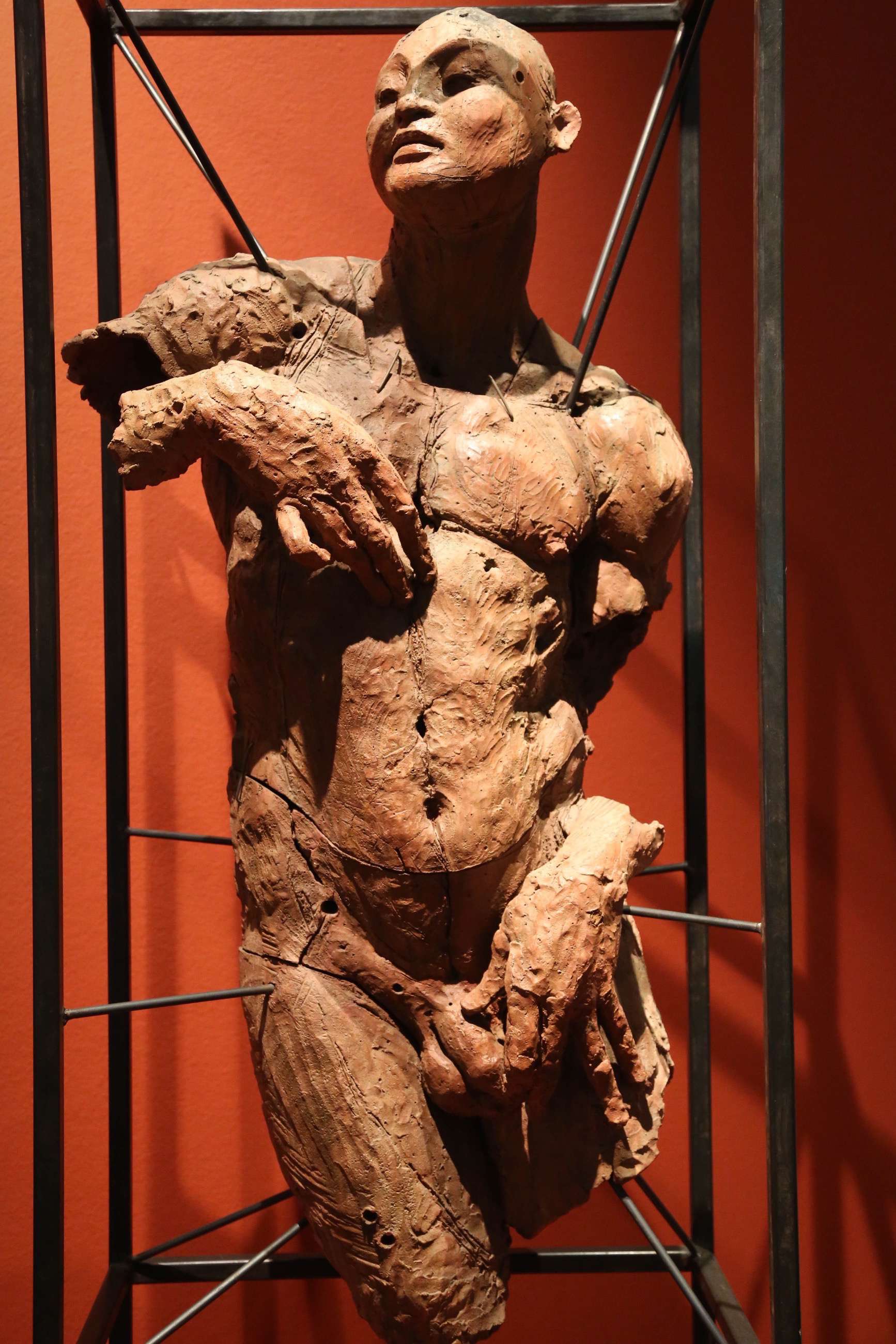 The size, power, emotion and presentation of many of Javier Marin’s works appear as if the art has been captured in its own thoughts. 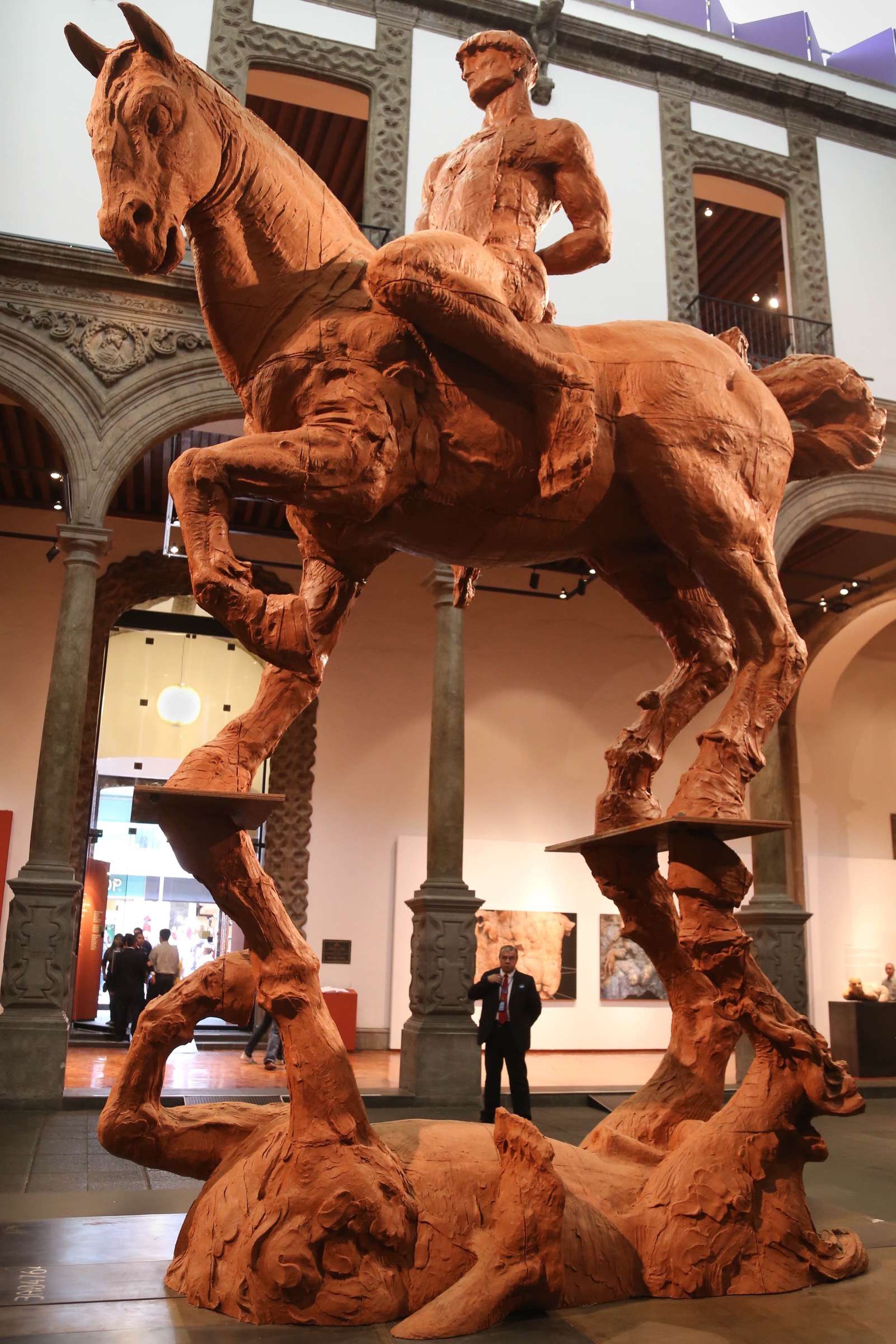 The massive horse-on-horse ‘reflection’ by Javier Marin can be interpreted any number of ways and invites viewers to visually roam over the piece.

Respectively, they have shown their work over most of the world (though never together). Javier’s website indicates he has more than 90 solo shows and 200 collective shows with other artists. Jorge’s website attributes more than 200 individual and collective shows to him. Together the brothers have nearly 50 years’ experience as working artists. Each has deservedly received international awards acclaiming their exceptional talent. 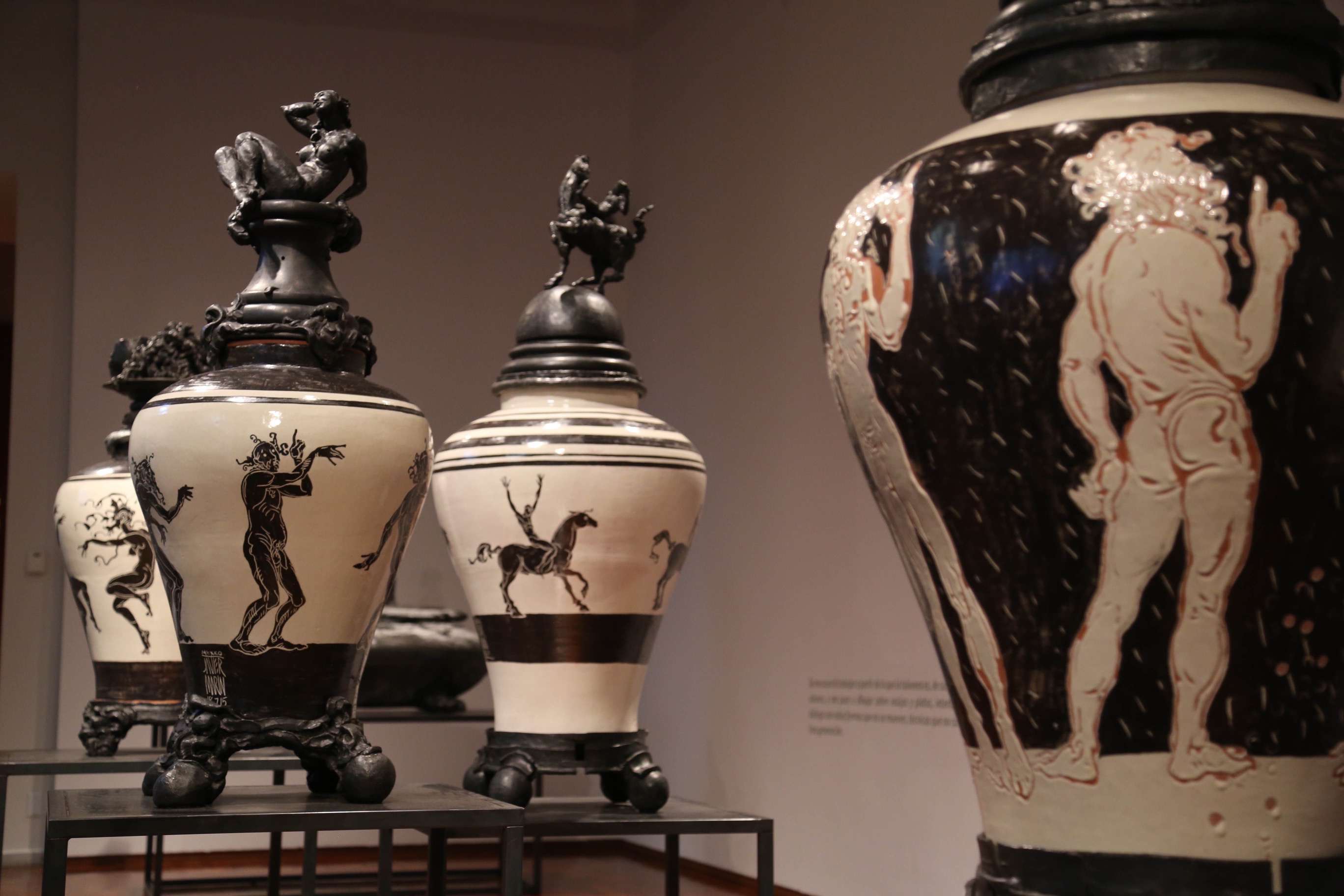 A series of ceramic vases by Javier Marin almost evokes a time of ancient Rome or Greece in their glory days.

Javier’s retrospective show in 2015 in Mexico City showcased of the power of his work. The show, titled “Terra. Material as Idea,” at the Palacio de Iturbide, was both a metaphorical and literal suspension of belief. The exhibit has many larger-than-life pieces depicting human bodies, horses, busts and reclining figures. There is a haunting, penetrating essence to his work. A number of the pieces are scored or cut into and seem to reflect the pain of creation. Many of the works, suspended within frames and the wiring used to hold them, imparts a feeling of crucifixion or life frozen in the moment.

Posed mid-air, this couple created by Javier Marin show balance, beauty and a sense of creation. 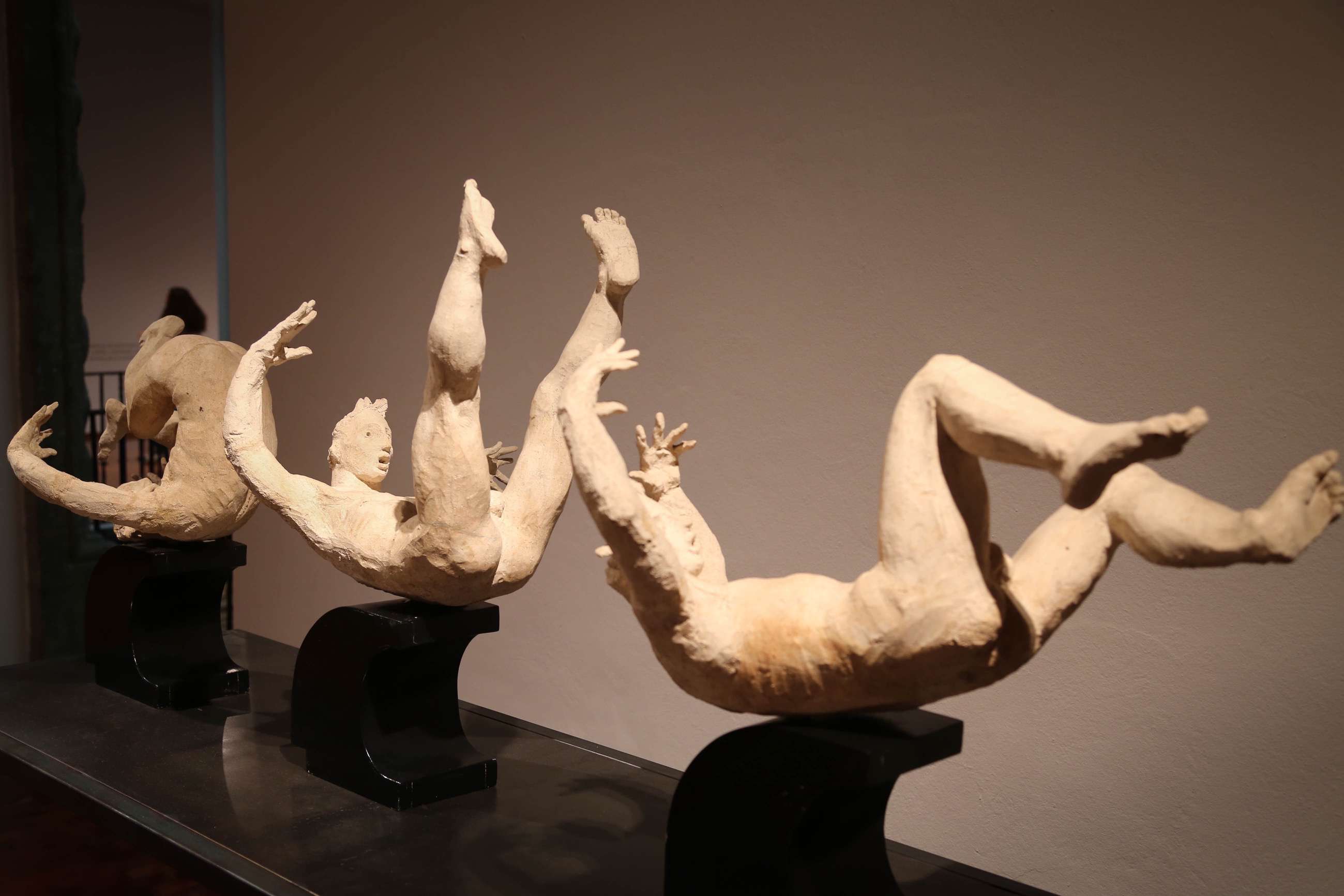 A trio of figures by Javier Marin appear to be falling to earth.

Jorge’s creativity has also been seen around the world and his work is equally distinctive and individual. Many of Jorge’s pieces appear ready to take flight and a number of his better-known pieces are humans with wings. Jorge also uses other themes to accent his work, such as scales, spheres, boats and arrows and this helps give his work an additional sense of balance and reflection. One element that recurs many times in Jorge’s work is a person wearing a mask, often elongated. Many of his creations are displayed in public spaces in Mexico City, including La Paseo de la Reforma where there are 13 examples of his work. 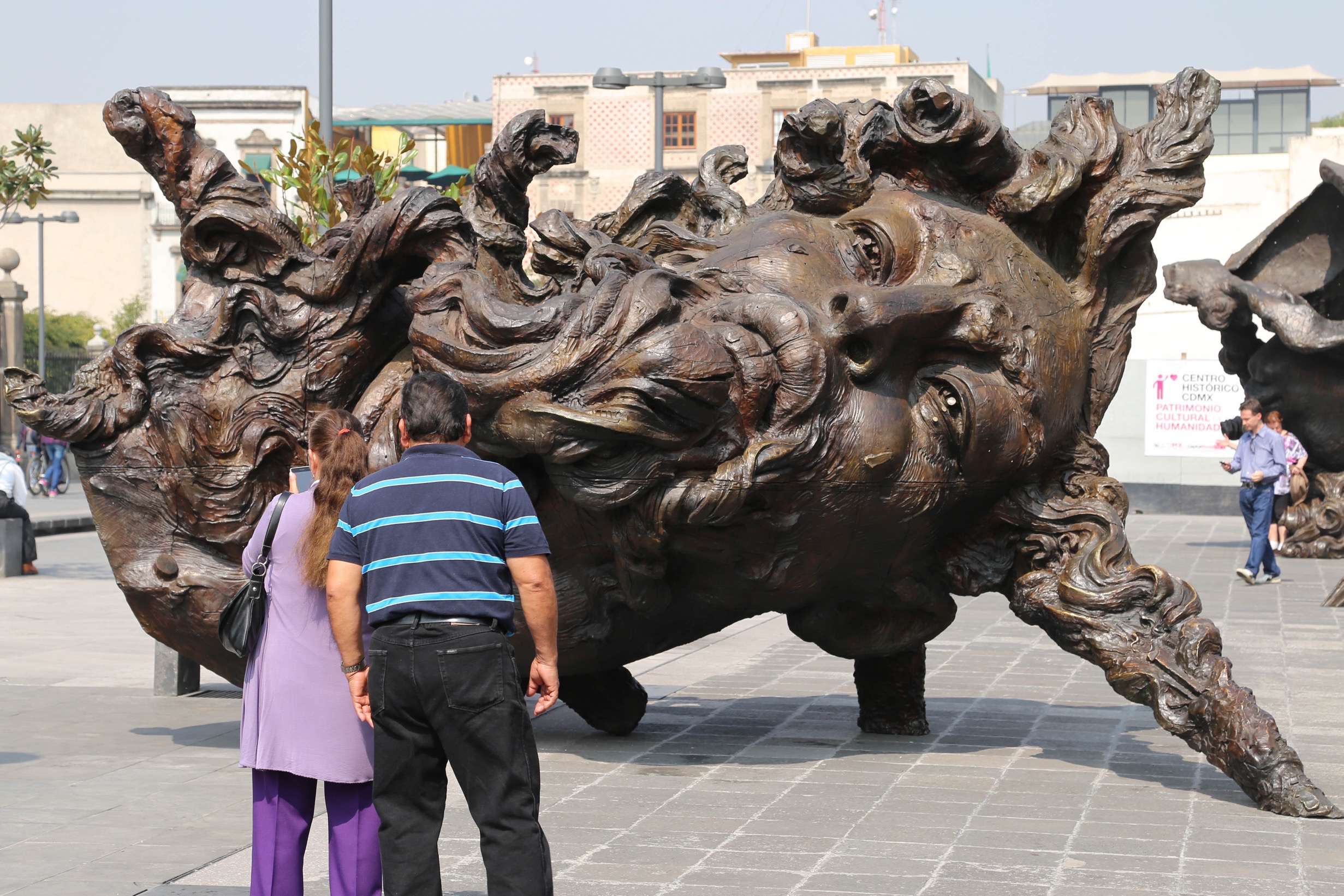 There is no denying the compelling power of Javier Marin’s massive, yet highly expressive sculptures. These pieces were on display near the Grand Zocalo in Mexico City in late 2015. 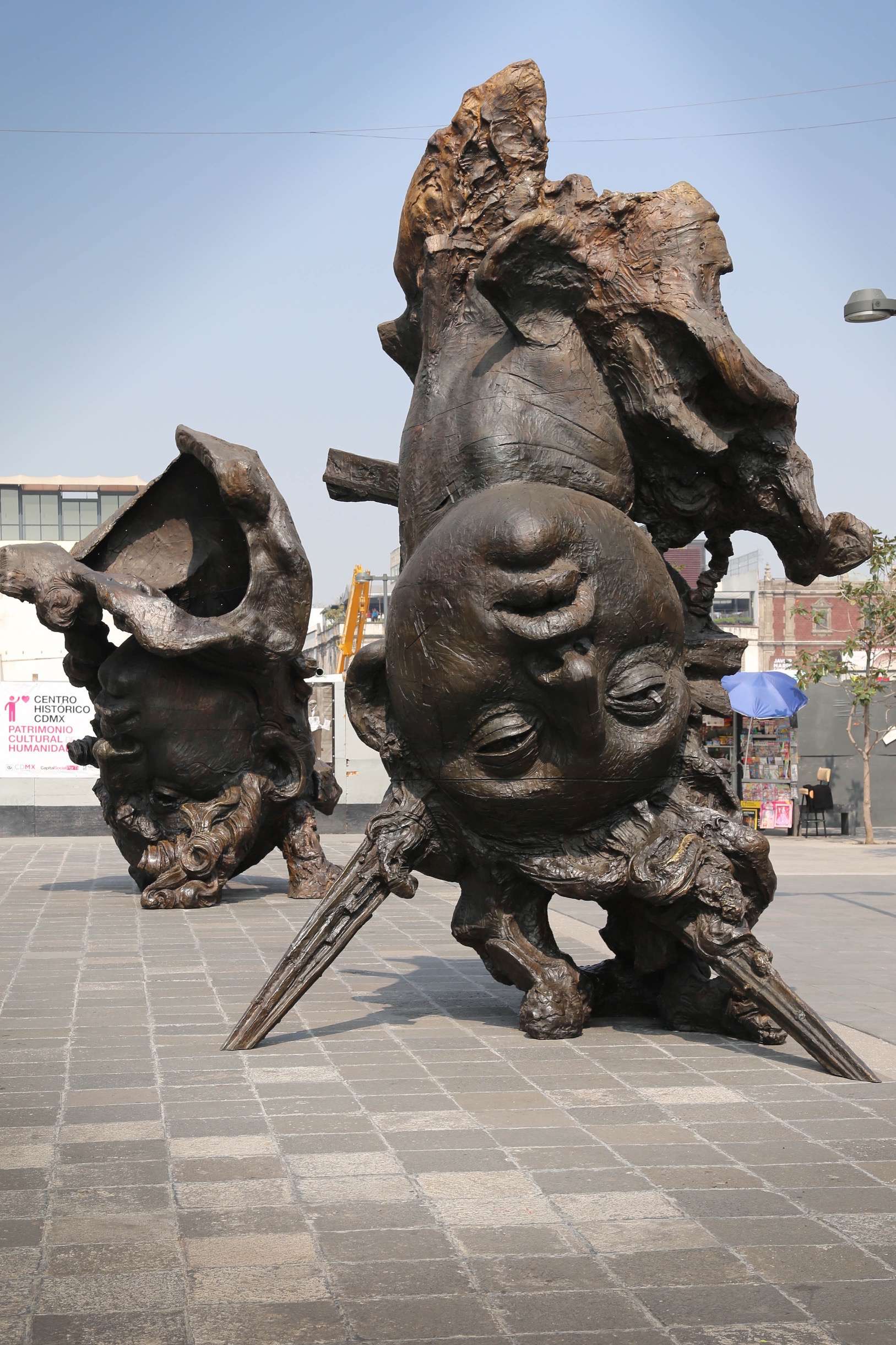 Javier Marin is able to achieve what few sculptors are capable of; creating a sense of life on a massive scale. 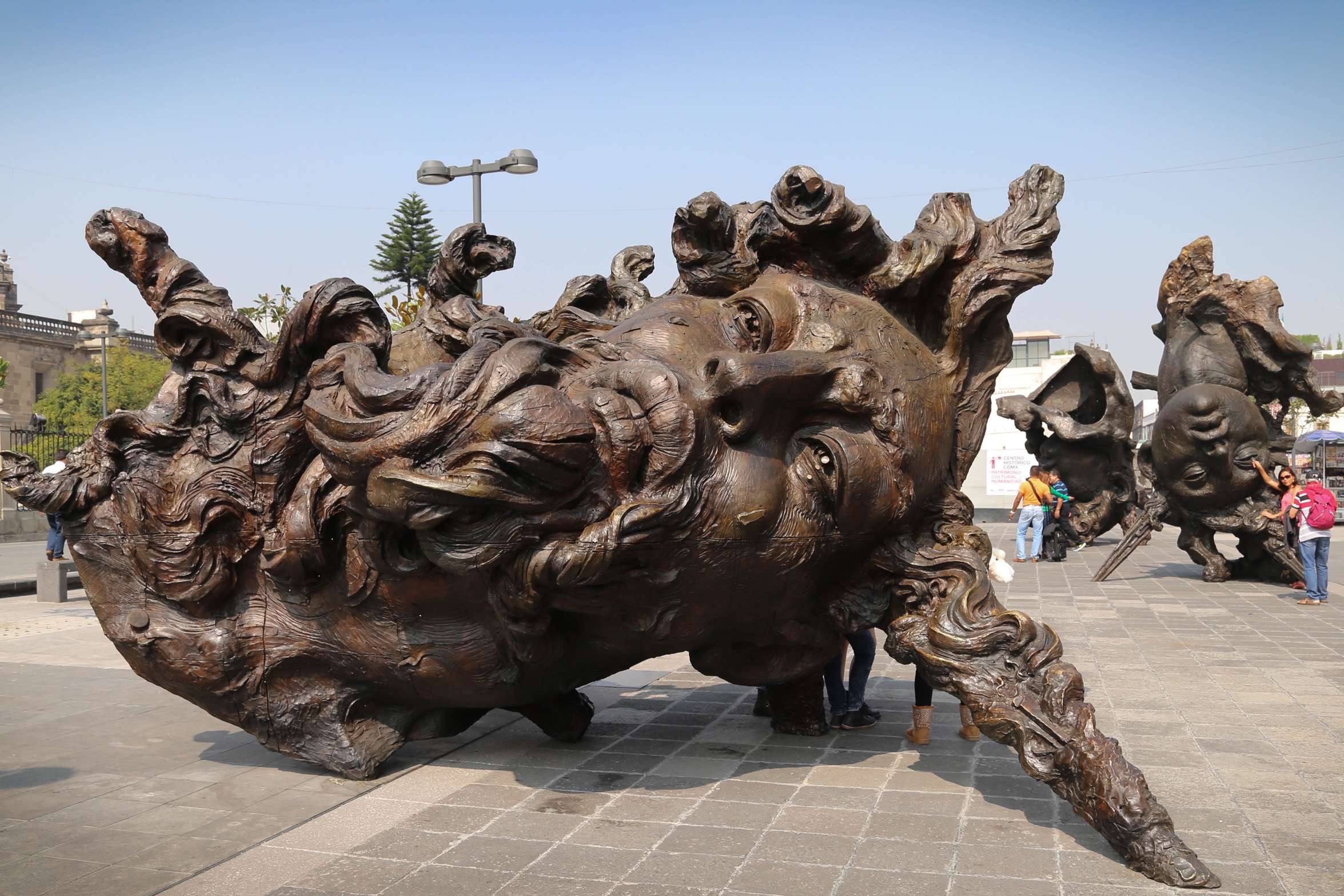 The gods of Mt. Olympus would agree Javier Marin has captured the essence of what Zeus, and perhaps Venus, right, might look like.

To appreciate the work of any great artist is always a delight. But to learn there is not just one, but two brothers of immense talent, who also come from a family of artists is truly amazing. With such an incredible wealth of talent, a question hangs in the air, begging for an answer, “Tell me about your parents. What were they like?” 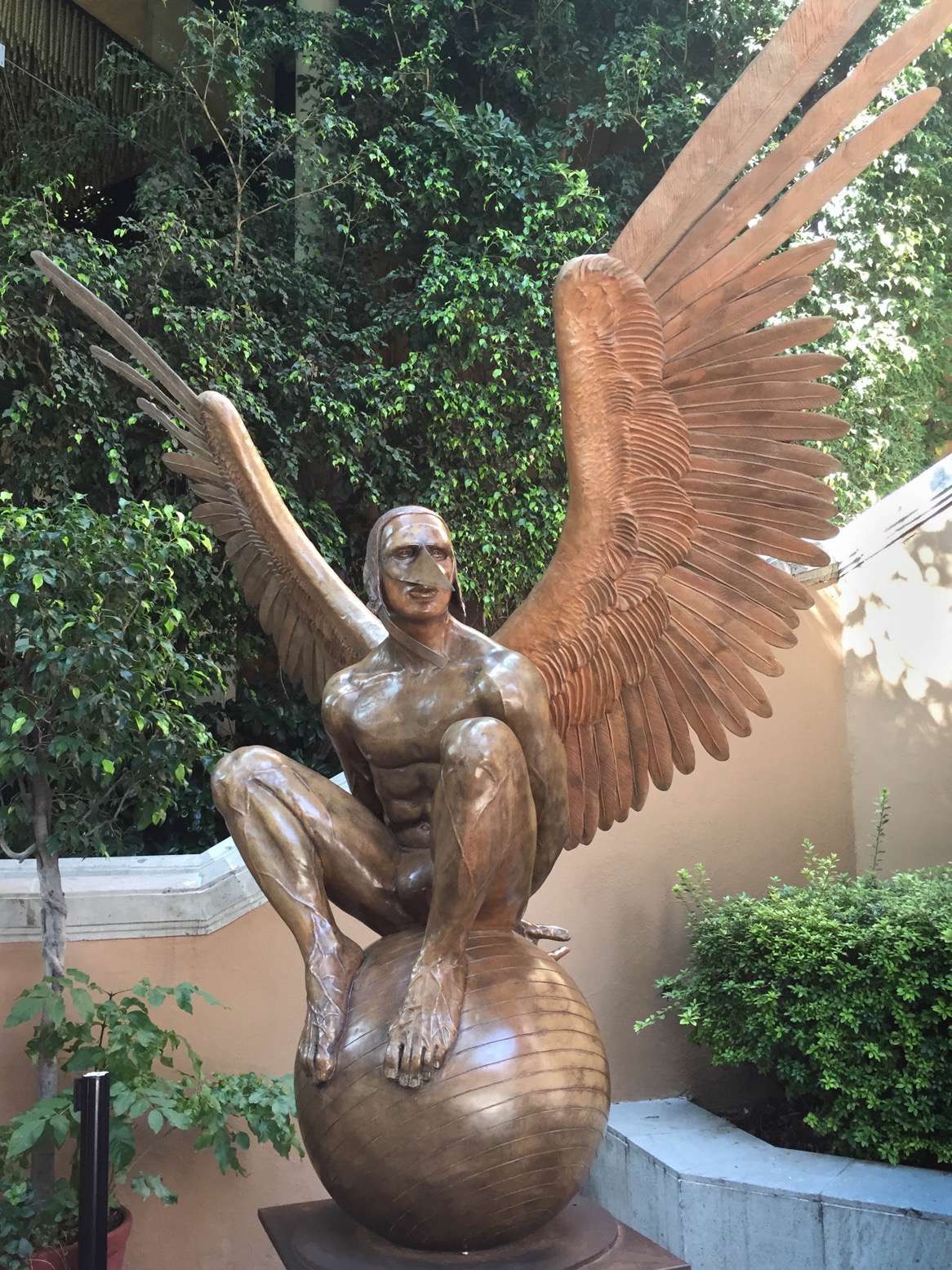 This is one of Jorge Marin’s famous bronzes, “Bernardo Oriental,” on public display in Mexico City. Wings, masks, spheres, and boats are often elements in Jorge’s distinctive sculptures.

For more information about these brilliant artists and their work, click to these websites: