Budva has a natural harbor and is protected by some of Montenegro’s steep hills.

Cetinje is a small, but important city in Montenegro’s history, and offers a more contemplative experience that Budva’s party-town vibe.

With so many enticing places tucked into the nooks and crannies of the world the average tourist would be forgiven for scratching their head if Montenegro was suggested as a travel destination. But the smallest of the six nations of the former Yugoslavia offers beauty and hospitality, including a vibrant beach party scene and the serenity of religious piety. For these last two items Budva and Cetinje are excellent examples.

The clear waters of the Adriatic Sea frame the historic area of Budva while the Ballerina maintains her pose. To the right is part of the ancient fortress built to protect Budva.

Just outside Budva is Jaz (yaz) Beach, a very popular spot for sunbathing and swimming that becomes very crowded in the warm summer months. It is accessible by way of a footpath from the hill, above right.

Budva (bood-vah) is sometimes called the “Miami of Montenegro,” and tourism is the engine that drives the local economy. The Budva Riviera is a 22-mile long stretch situated in the middle portion of the Montenegrin coast and the city is reputed to have the best beaches and climate in the South Adriatic Sea. Average (Fahrenheit) temperatures in the summer (June through September) are in the 70s and 80s, with lows in the 60s. Water temperatures during that time range from the high 60s to mid 70s.

In the early winter months, Budva is a quieter, less hectic town, but the chaise lounge chairs arrayed on the beach, left, are filled with sun bathers in the summer months.

Budva’s party continues when the sun goes down; the city is renowned for its nightlife. Bars, clubs, discotheques, and music festivals offer revelers plenty of music and libation to help them dance the night away. Two of the larger music festivals, Top Hill, and the Sea Dance Festival feature top name musicians and they draw tens of thousands of merrymakers to Budva (in 2008 Madonna drew 47,000 spectators to her performance). The continuing addition of hotels and short-term rental options means the summer party scene in Budva is likely to continue to grow.

As seen from an overlook, Budva is an inviting destination that attracts tens of thousands of visitors.

Restaurants, shops, bars, and clubs all do a brisk business during the warm summer months when tourists and visitors flock to Budva and enjoy strolls along places like this street in the Old City.

And to be fair, Budva is much more than just a party town. It has an Old Town that is thought to have been first settled by the Illyrians, who predated the ancient Greeks. The Old Town is an enchanting chockablock of stone buildings, terra cotta roofs, narrow winding streets, restaurants, shops, and cafes. In July and August many areas of Old Town become Theater City where visitors can take in performances – music, literary, and visual arts presentations.

Cetinje is home to a monastery, and on this day a member of the church greets a priest, bottom center, just after a worship service has concluded.

A man, right, walks his dog along a stone path in Centinje that goes past a restored building on a cool autumn day.

The chill of autumn has begun to turn the leaves of trees in this park in Cetinje as a pair of visitors stroll along.

For an entirely different taste of Montenegro, Cetinje (se-tin-yea), about 8 miles north and inland of Budva showcases some of the spiritual history of Montenegro. Cetinje’s population is around 14,000 (compared to Budva’s 55,000 residents). Cetijne is noted as the historic capital of Montenegro, and the Blue Palace is the official home city of the nation’s president. The city was founded in the 15th Century and is the cradle of Montenegrin culture as well as the center of religion for 70-plus percent of the population practicing the Eastern Orthodox faith. (Approximately 19 percent of the population are followers of Islam, with 3.4 percent calling themselves Catholics, just ahead of the 3.3 percent who identify as atheist or agnostic.) The Vlaska Court Church and the Cetinje Monastery are two of the better-known Orthodox churches in Cetijne.

The Vlaska Court Church was constructed beginning in 1450 A.D. and is the oldest house of worship in Cetinje.

The pillars around the outside of Vlaska Court Church date back to the 10th Century A.D. It is believed the church is named after Vlahs, people who guarded cattle.

The Vlaska Court Church is a small limestone structure built atop a Bogumils necropolis, a Gnostic sect that came out of the first Bulgarian Empire as far back as the 10th Century A.D. Construction of the Vlaska Court Church began in 1450 and the name is thought to derive from the Vlahs, people who guarded herds of cattle. The church is a simple building that might be considered more of a chapel by modern standards.

Palms and trees provide shade and a calming sense to this church in Cetinje, with its glistening mosaic above the door.

Limestone is an abundant building material that wears well and is strong to build walls and hardscape elements for trees and plants.

The Cetinje Monastery is a much larger facility and is a Serbian Orthodox church and monastery. Construction began on the complex in 1485 and was completed sometime in the early 1700s. But the church and monastery were caught in some of the wars sweeping up from the Ottoman Empire, and then defended by Christians coming to their aid. On days when saints and holy days are celebrated, the church is a beehive of worshippers and priests. In addition to the church, there is a large area where memorial candles are lit by those who want to remember family and loved ones who have preceded them and also to pray for the souls of the living.

At this area of the Cetinje Monastery people light candles for loved ones who have passed on, as well as for the living. 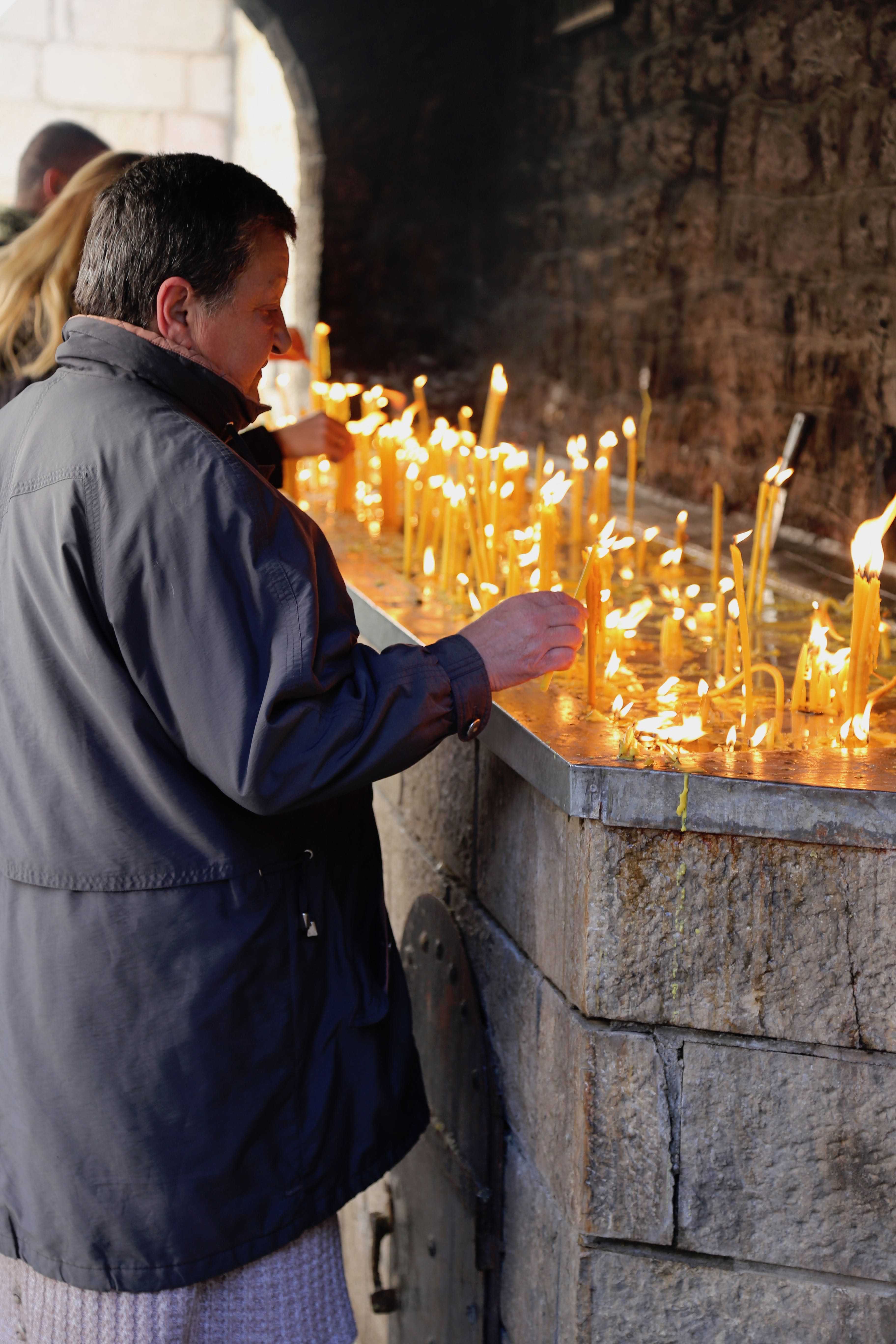 A woman quietly lights a candle and places it with the many others that are there to remember those who are loved.

The mosaic tile work of art on the back wall of this small church is a testament to the devotion of the faithful.

There are a few points worth noting about these two cities, the nation of Montenegro, and in general the region that comprises the former Yugoslavia. Like so many cities in Montenegro, Budva and Cetinje are ancient, and they have been won, held, and lost by a series of conquerors, cultures, and empires. Montenegro is an old place, but a young democracy working hard to make its place in the region and the world. And while there are officially six nations that emerged from the former Yugoslavia, Kosovo is a region (slightly smaller in area than Montenegro), within Serbia that has claimed independence and is recognized by a number of countries (including the United States of America and major European Union member countries), but Kosovo struggles to wrest itself free, due mainly to resistance from Serbia and Russia.

The countryside of Montenegro is rugged as well as beautiful. Here a pair of horses, bottom left, lazily graze, bathed in the light of an autumn day.

Montenegro is on the current agenda to join the European Union, which has standards for highways and other infrastructure. Montenegro’s rugged countryside adds to the challenge and expense of building and maintaining modern highways.

This small town in the center of Montenegro has cabins where visitors can relax for a few days and get closer to nature. A lone cow grazes near the dirt road that passes in front of the cabins.

All of these factors combine to make the Montenegrin cities of Budva and Cetinje fascinating and beautiful places to visit where the sights you see and the experiences you enjoy will be memories that will last for many, many years.

Pork legs hang from the ceiling in this simple, but highly effective curing barn. Smoke cures and flavors the ham, and as it dries and ages from curing, the rich flavors are intensified.

This restaurant may be in a small town off a two lane road in rural Montenegro, but judging by the number of flags, it is a stopping point for visitors from around the world.

The restaurant is a carnivore’s delight, featuring typical dishes, wines, and local spirits. A corner of the restaurant sells items that travelers can take with them.

Montenegro is an Eastern European country so it might not be surprising that a book about Vladimir Putin is part of a display on a wall in a restaurant.

For more information about Budva and Cetinje, click on these websites: