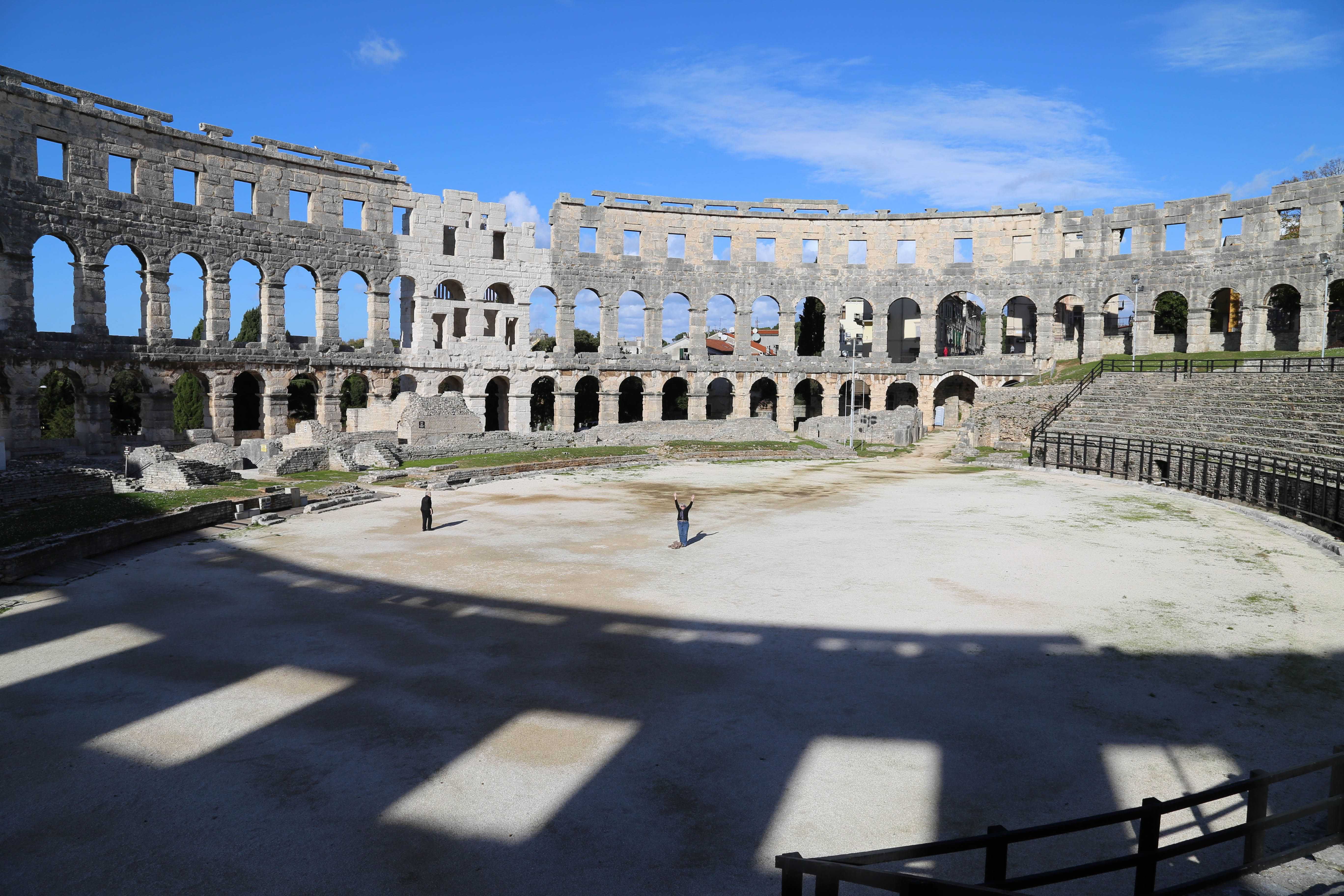 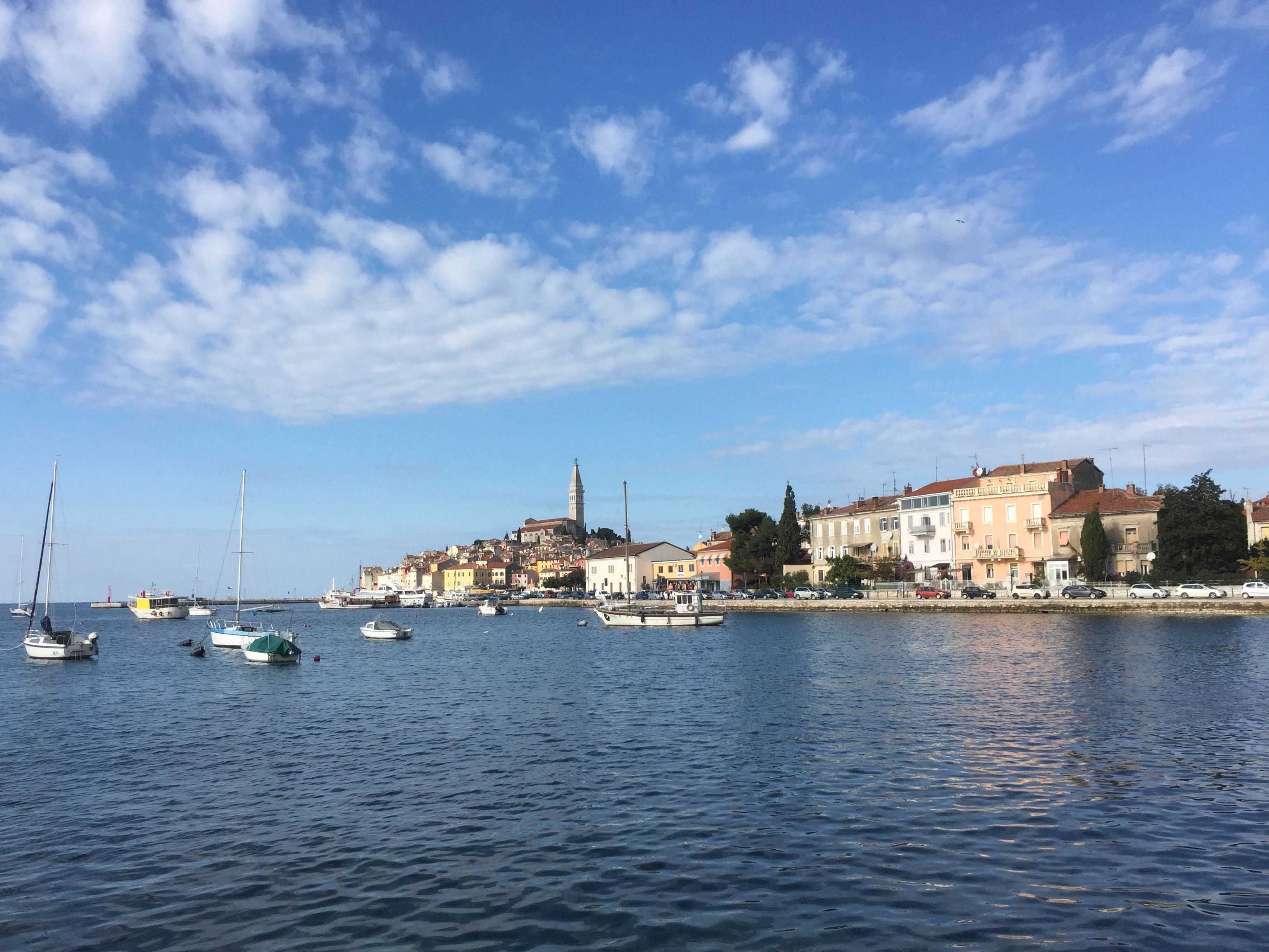 Rovinj may be a small coastal city along the western edge of the Istrian Peninsula, bu the bounty of the Adriatic Sea and abundance of the land has made it an attractive home for thousands of years.

Istria is a locale that casts Croatia in a most favorable light. The small peninsula that juts into the Adriatic Sea is shared by Croatia, with small parts in Slovenia and Italy, where the coastal city of Trieste is situated. As a consequence, the peninsula has one foot in Italy, one in Croatia and is an excellent example of how the blurry lines of history can make regions of the world special places unto themselves. Two Croatian cities, Rovinj and Pula, both on the western edge of the peninsula, are excellent examples how the differences and distinctions of two countries can blend together. 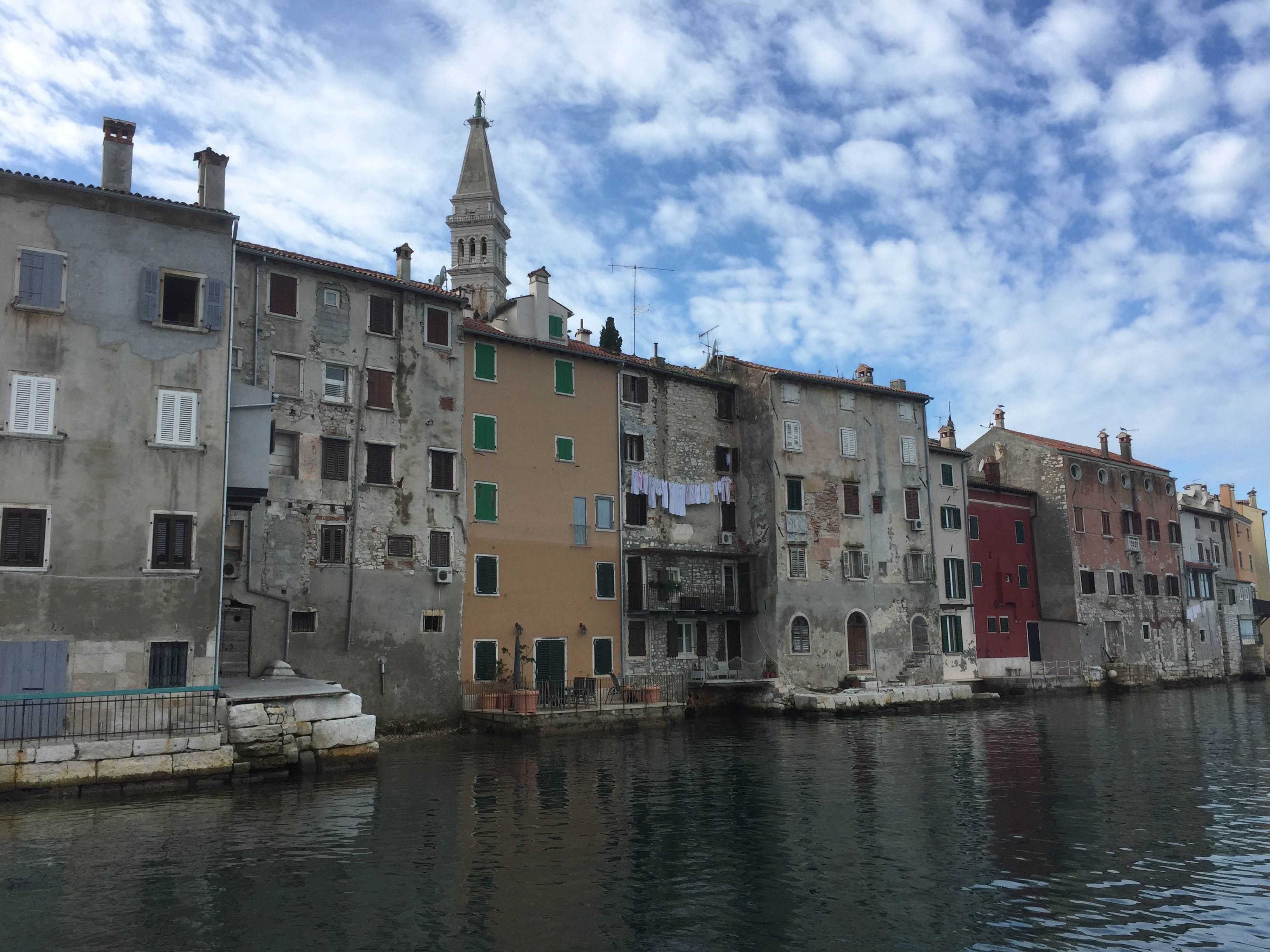 At water’s edge in this area of Rovinj, some of the buildings open on docks making it easy for boats to pull up and offload their cargo.

Nowadays, nearly 90 percent of the Istrian peninsula is part of Croatia (in Croatia, nearly all the peninsula is Istria County). Over the centuries the prominence and proximity of the Venetian Republic gives the peninsula and its cities a decidedly Italian flavor. For example, the county is officially bi-lingual and citizens there can speak either Croatian or Italian. And unlike most of the rest of Croatia, shops, restaurants, and businesses happily accept either euros or the Croatian kuna. 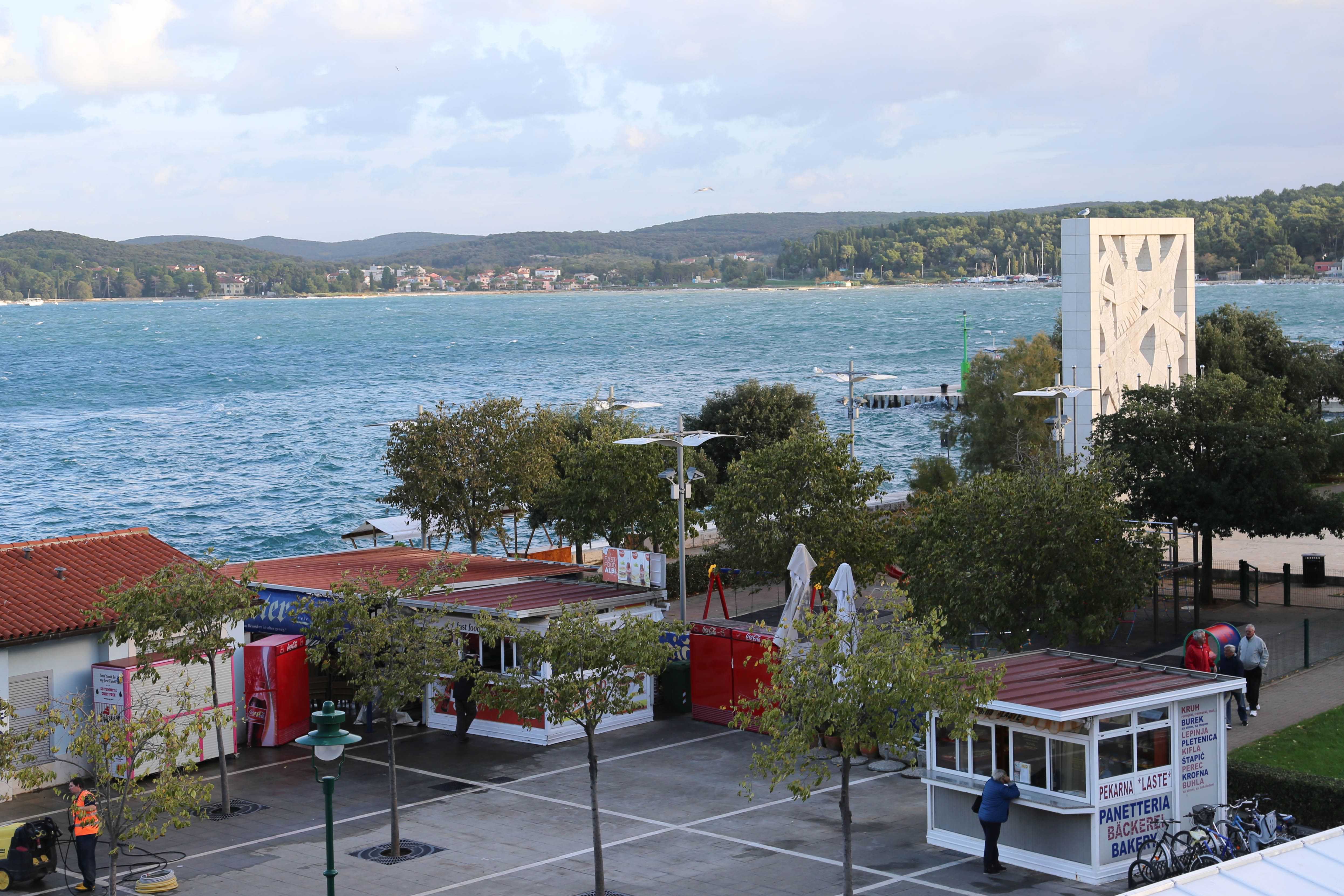 Early morning in Rovinj begins to stir to life as a handful of people start their day.

The Venetian Republic is important in the history of Istria. Officially known as “La Serenissima” (The Most Serene Republic of Venice), it was never a republic in the usual sense, but rather a system where ruling elites administered the various affairs of Venice. Venice had its own fleet of ships, and during the height of its glory, the 7th through 17th centuries, it was a leading international center of trade, commerce, and influence. Starting in the late 11th Century Venice began to reach out to the Istrian Peninsula and beyond, leaving its mark on cities like Rovinj and Pula. 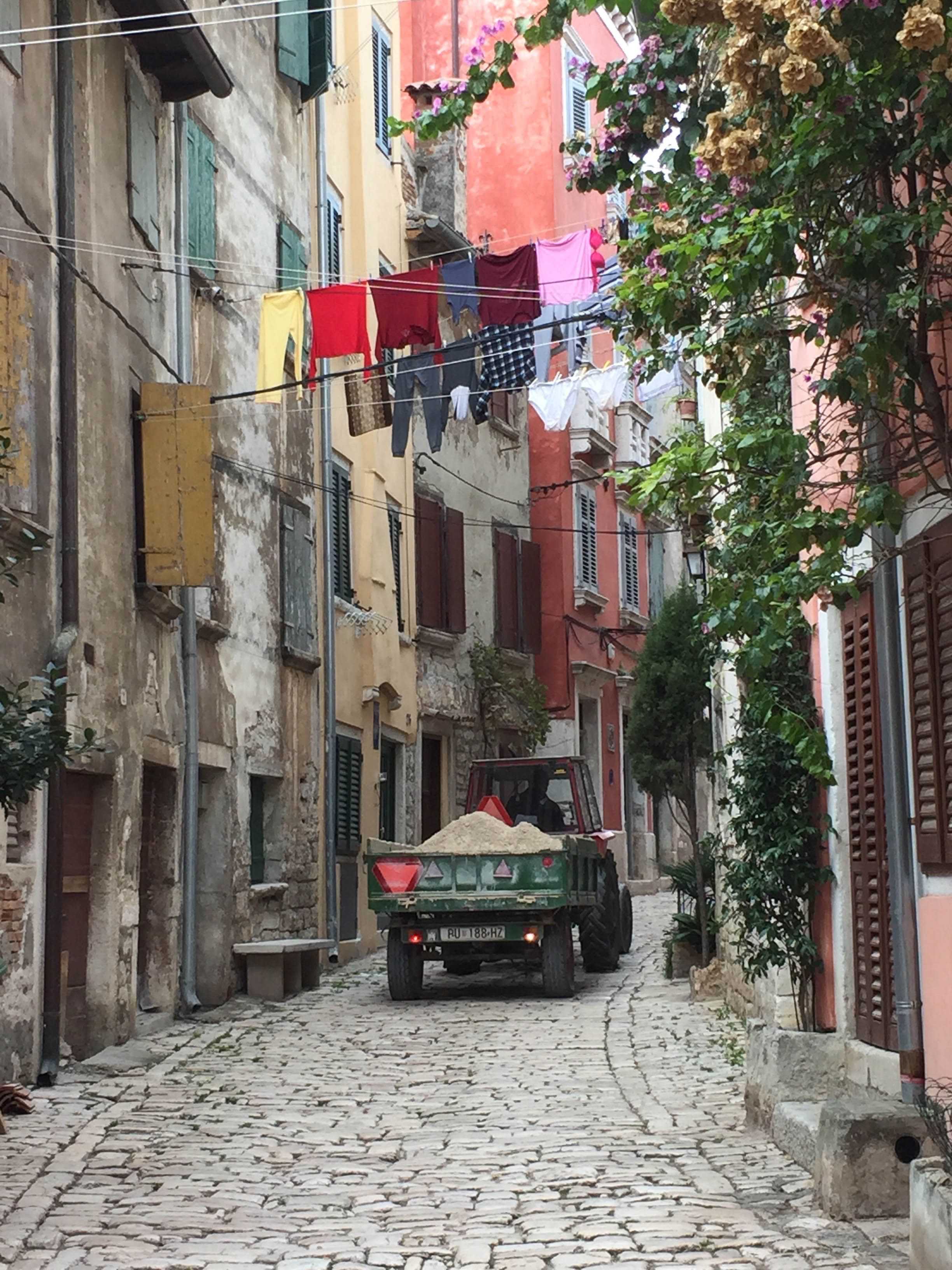 Visitors to towns like Rovinj are often struck by the ancient beauty, cobblestone streets,  limestone buildings, and painted facades. But for those who live and work in Rovinj, like anywhere, laundry needs to be washed and dried and construction materials must be delivered.

Like so many of the ancient towns and cities of the Mediterranean and Adriatic regions, Rovinj was taken over by the Roman Empire, and then later cultures would hold sway. The growing importance of the Venetian Republic would cement an Italian flavor on the city. Rovinj, population just under 14,500, was originally an island whose narrow channel was filled in and connected to the peninsula. 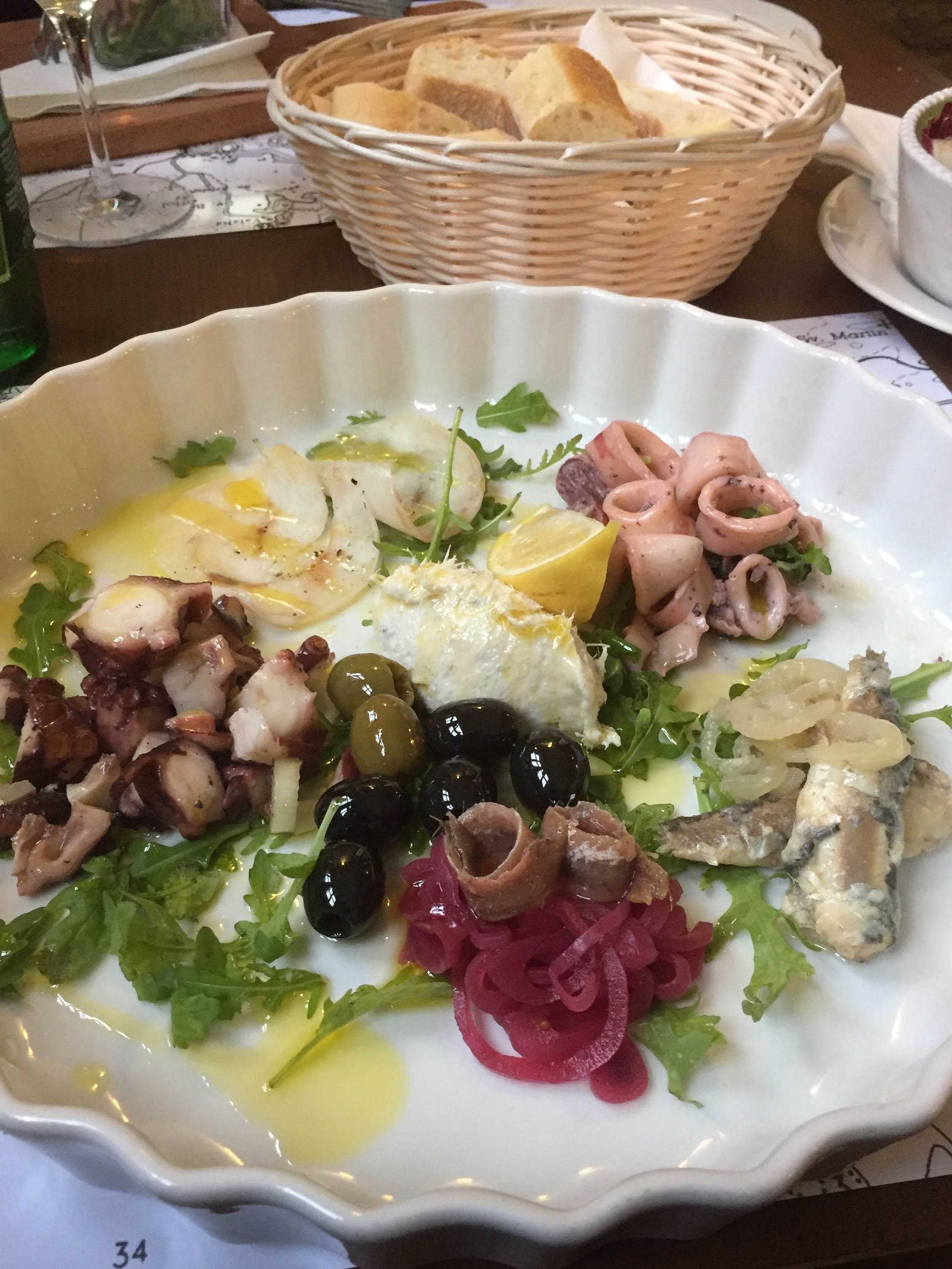 The Adriatic proffers an amazing array of fresh seafood when paired with the excellent white wines of the Istrian Peninsula, and drizzled with some of the finest olive oil in the world to create culinary delights.

The modern-day character of Rovinj retains a small-town feel – the city center’s harbor is more of a workingman’s affair, with fishing boats crowded together – as opposed to fleets of sailboats and yachts. Conversations are a blend of Croatian and Italian, and locals enjoy a relaxed style that is not as obsessed with the transactional nature of the tourist trade. Rovinj has long been a popular destination for Italians, and increasingly Europeans and Americans are appreciating its charm. The church of Saint Euphemia, perched on the highest point of Rovinj, keeps watch and offers commanding views of the city and the sea. There are cruise ships that call on Rovinj, but they are smaller, with passenger counts normally in the hundreds, not thousands. 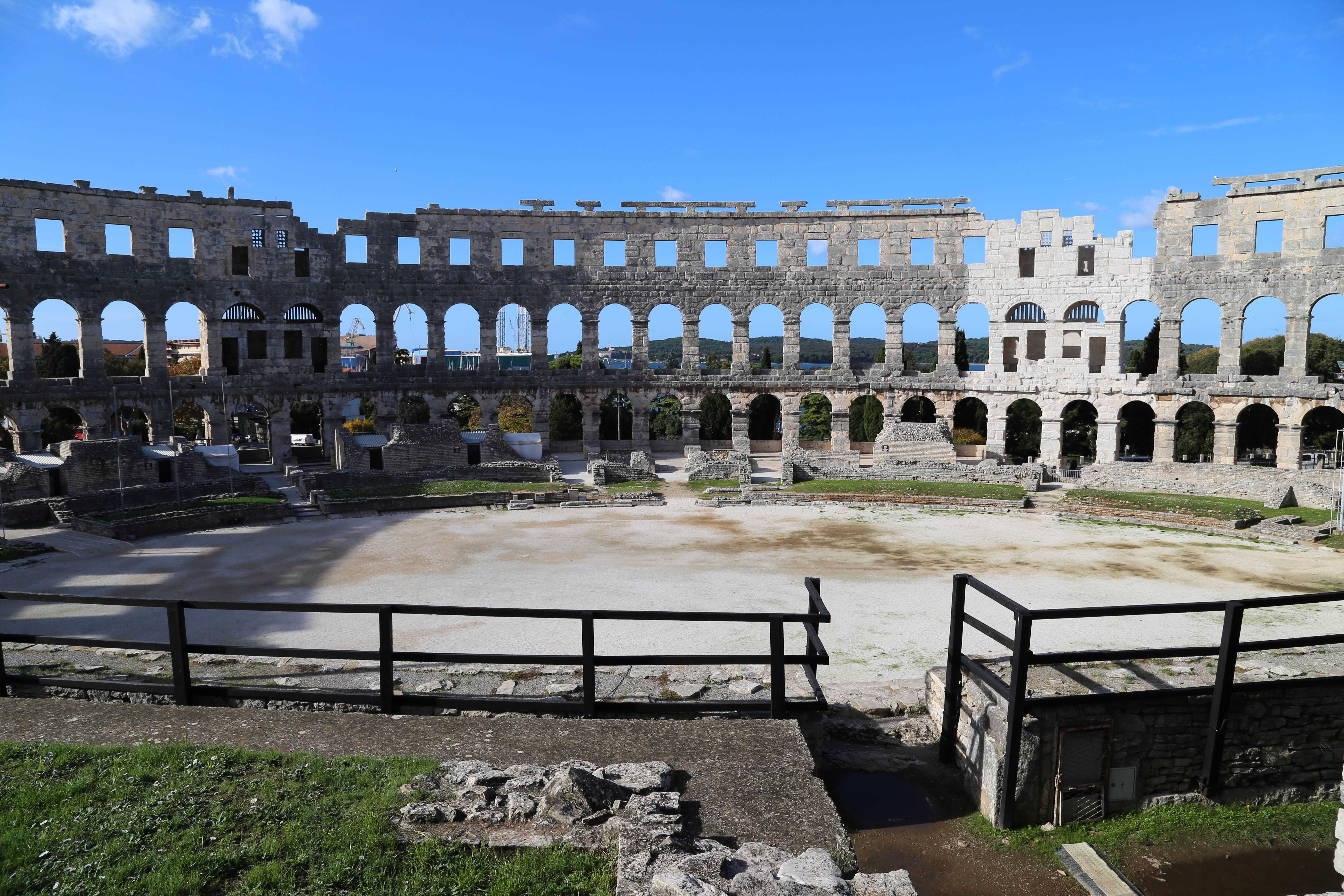 The coliseum is one of the great construction legacies of the Roman Empire and the one in Pula is among the best-preserved in the world. This was once part of the Roman gladiator circuit and tens of thousands of attendees would crowd the seats to relish the spectacle. The venue is still used to host concerts, performances and plays. 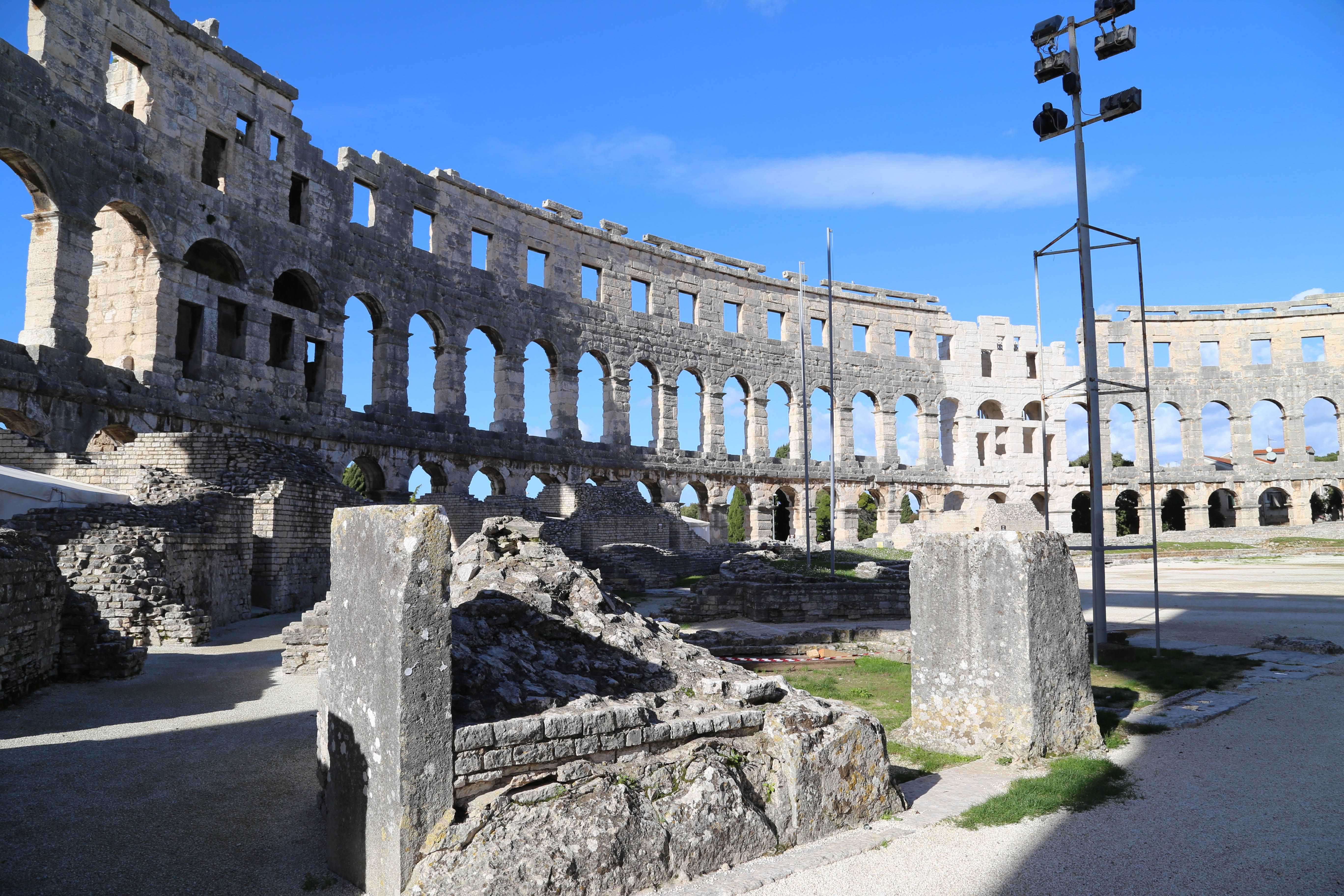 The details and elements of a coliseum were impressive, making it possible to move people, animals, and dramatic sets in and out of place to keep the crowds entertained.

Pula is less than 20 miles from Rovinj, about a 40-minute drive south. It is the largest city on the Istrian Peninsula with approximately 57,500 people. It is a city bucking the usual trend in Croatia where resident populations are in steady decline. Croatia’s recent history has seen some dark times, starting with the death of Josip Broz Tito in 1980, the breakup of Yugoslavia during the ensuing years, and the civil wars that racked the country during the early 1990s. 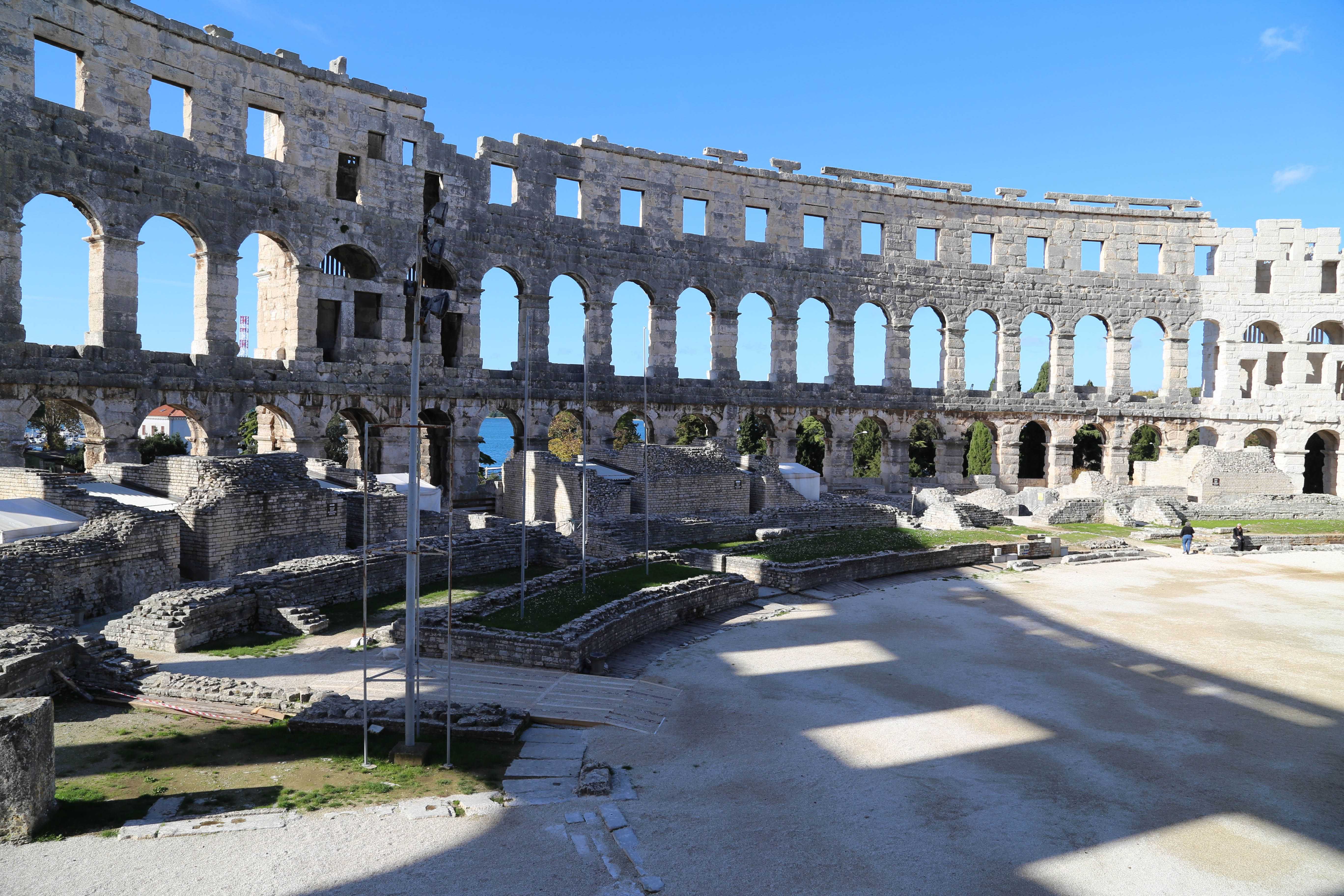 The coliseum is near the sea and on a slight hill, which offers views of the water, as seen through the arch, center left. 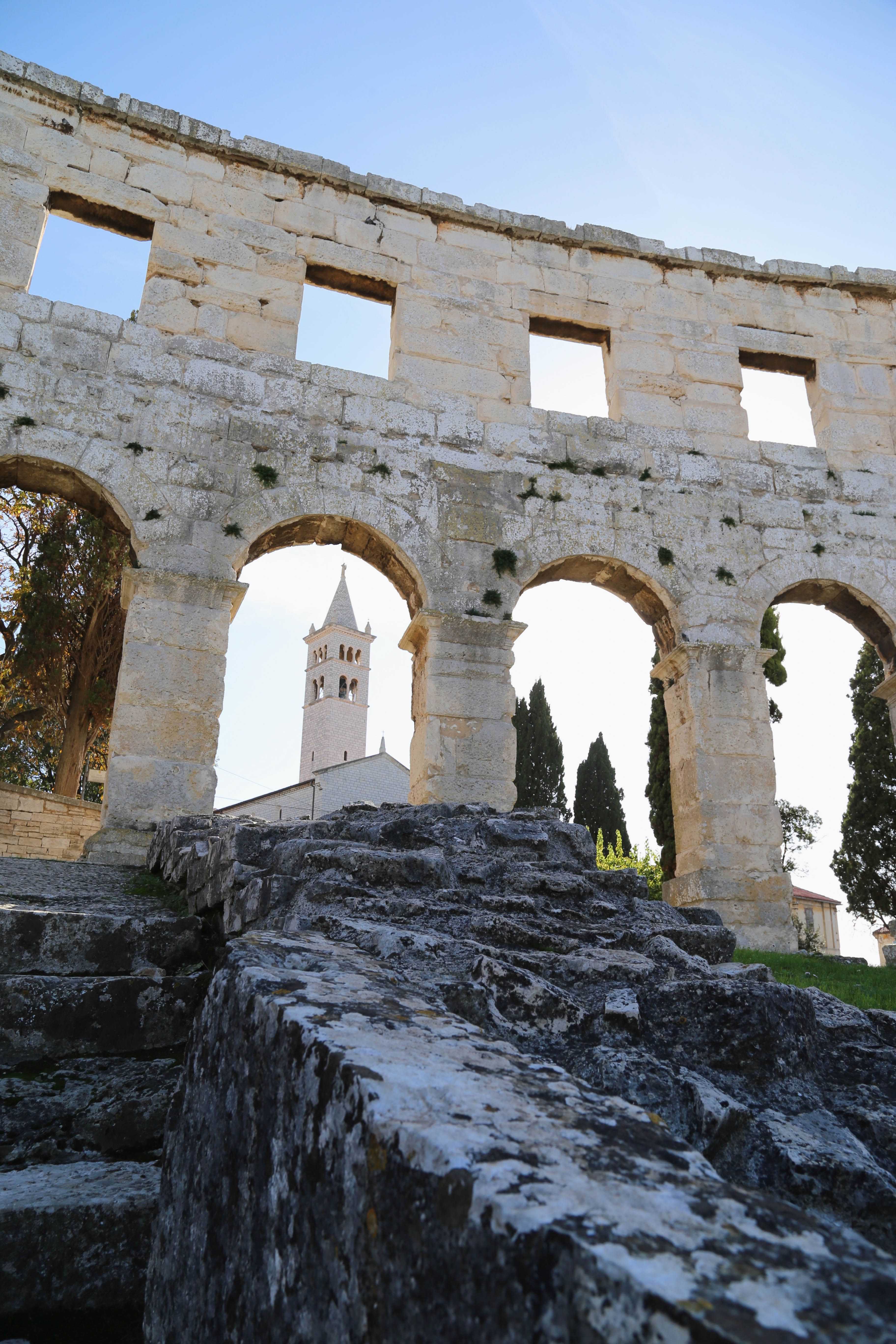 The bell tower seen through the arch at center left was built many centuries after the coliseum was built, but the two are evidence that Pula was a place where people made a great effort to establish a place to live.

Those years of disruption have left many of the mainstays of Croatia’s regional economies devastated, such as ship building and manufacturing. But thanks to a combination of factors, Pula is a city that “works” and it is seeing increases in population. Some of the reasons for success may be due to its location on the Istrian Peninsula, a large sea port that has extensive commercial docks, warehouses and storage, dry dock and repair facilities, and a more diversified economy that is not heavily dependent on tourism. 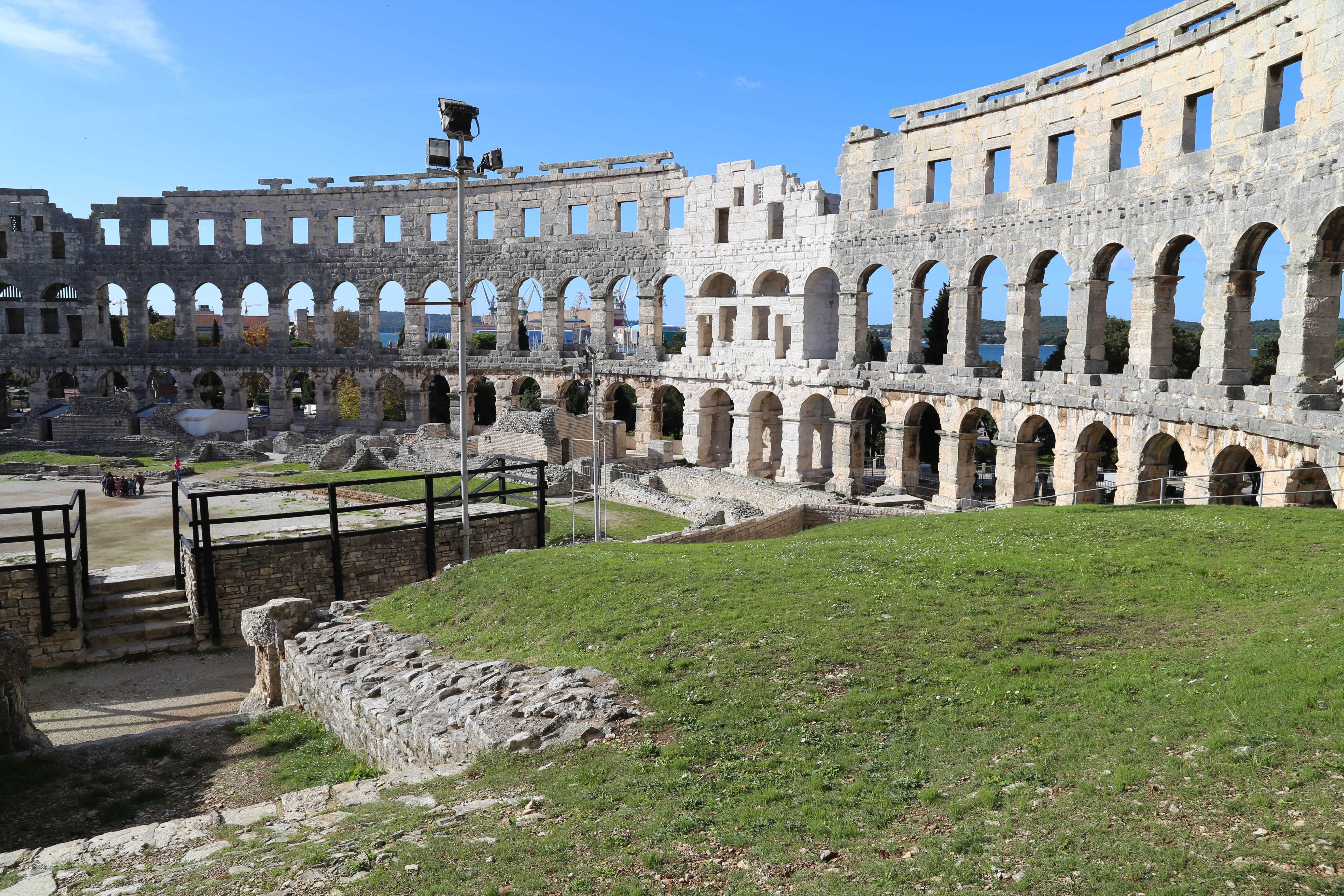 Restoring a coliseum is something that takes time, money, and great care. The portion in the center is a major element of restoration and great care has been taken to recreate the original structure. 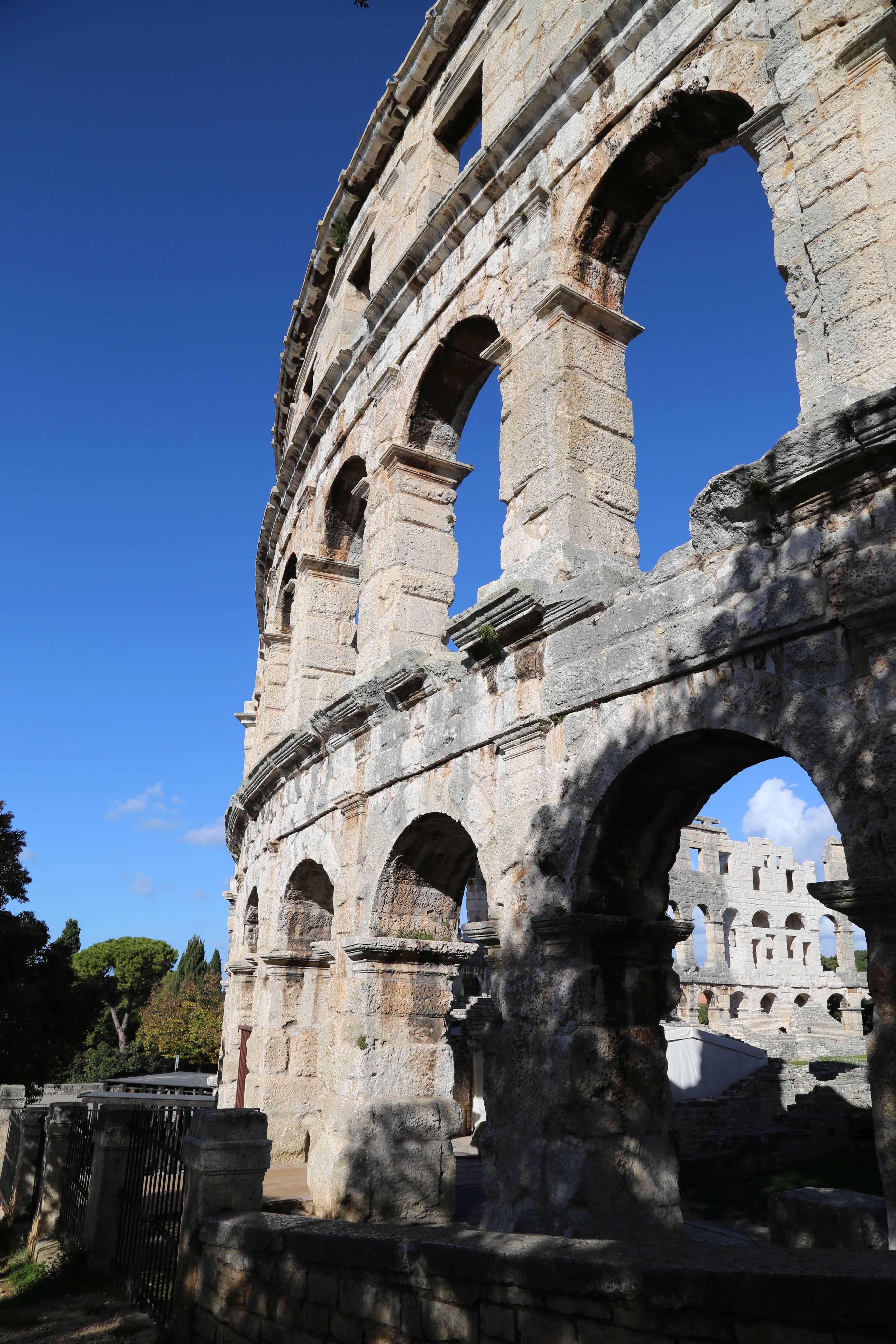 The Roman arch is a thing of beauty that cleverly bears considerable weight, provides a strong structural foundation, and allows for light and air to fill a space. The fact that this coliseum has remained intact for thousands of years is a testament to the quality of design and construction.

But Pula has its own special tourism gem – a Roman coliseum ranked as one of the best-preserved in the world. More than 2,000 years old, construction began in 27 B.C. The structure is near the harbor, giving visitors views to the sea. And though it has yet to be recognized as a UNESCO World Heritage Site, the coliseum is the best-preserved ancient monument in Croatia. There was seating for up to 23,000 people and the arena was a part of the gladiator circuit and the venue continues to host concerts and performances. It is such an important historical relic that the reverse side of the Croatian 10 kuna note features the coliseum. 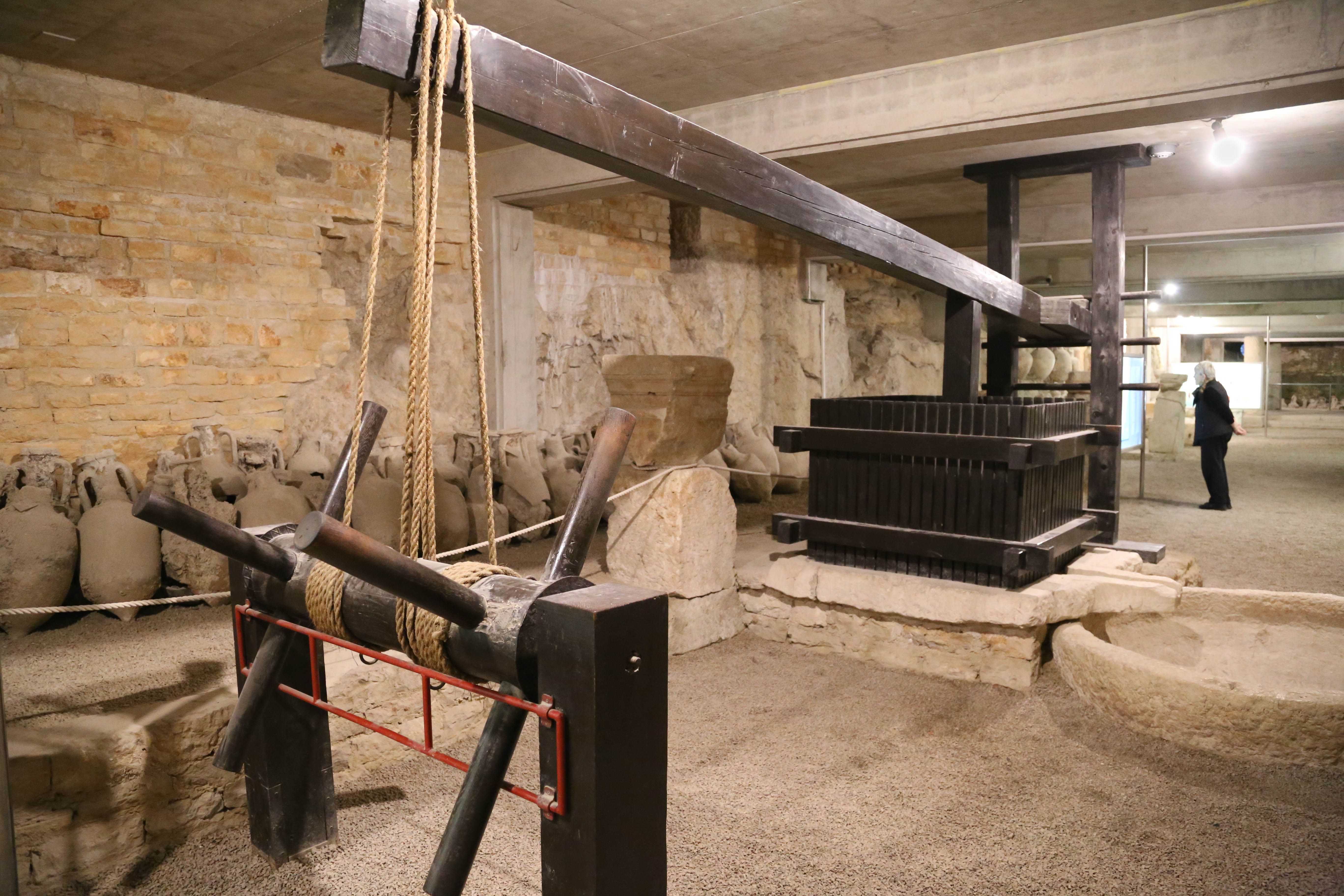 Below the coliseum is a museum that presents examples of how people lived and thrived in Pula.

Overall, the Istrian Peninsula is renowned for the quality of its wines, olive oil (considered some of the best in the world), truffles (there is a truffle festival each October), and cheeses (including a cheese flavored with truffles!). And given the relatively small size of the peninsula, Istria is a region where visitors can see a lot, whether driving by car, or taking a bus. 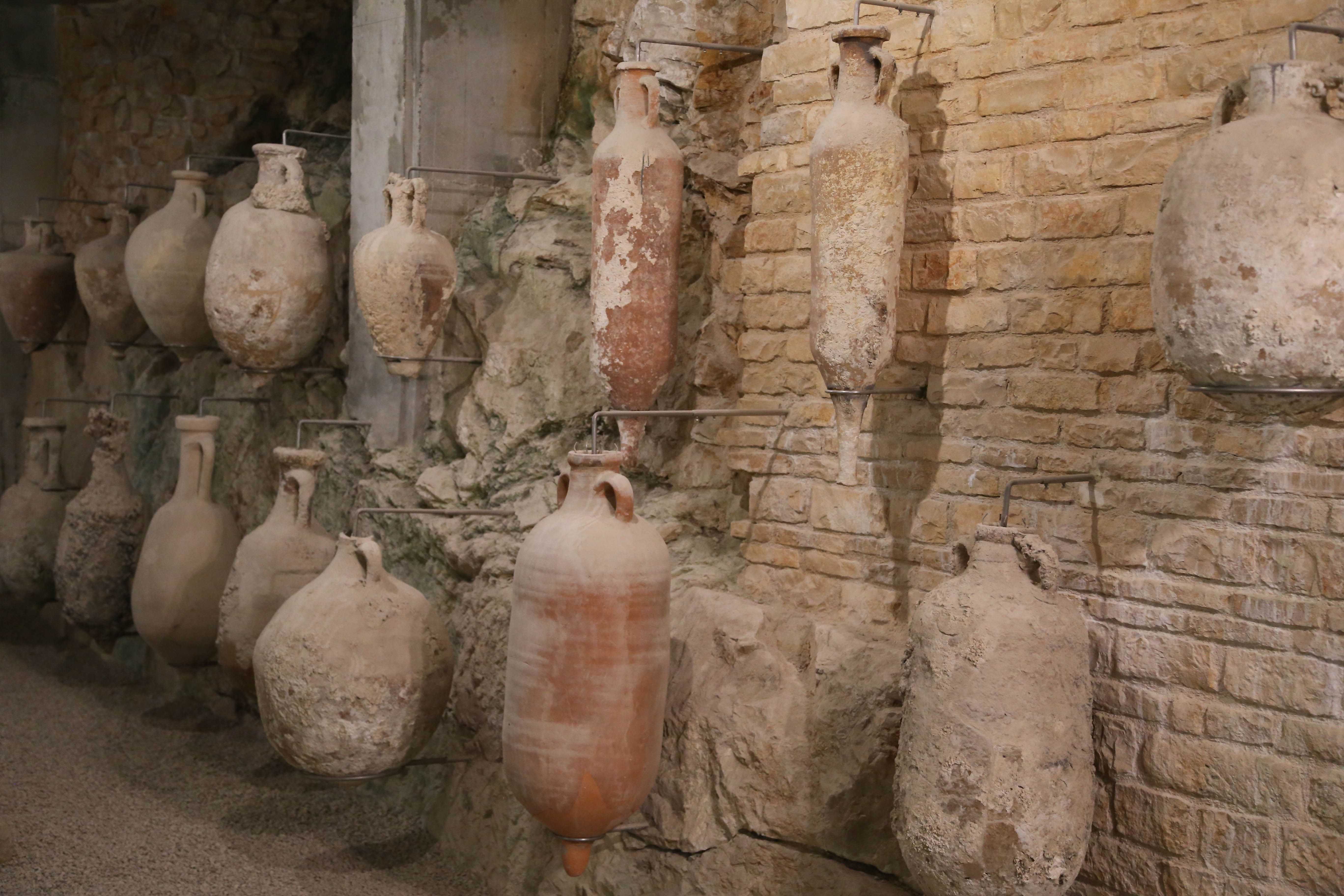 The plural of amphora is amphorae, and there were more than five dozen different sizes and designs of amphora. The vessels were used to carry liquids like wine and olive oil, and solids, such as grains.

First time visitors to Croatia are often struck by the beauty of the land and sea, the rich history and architecture, and how the outstanding foods, wines, truffles, and cheeses delight the palette. In Istria there is a distinct European feel in Croatia that is only found on the Istrian Peninsula. 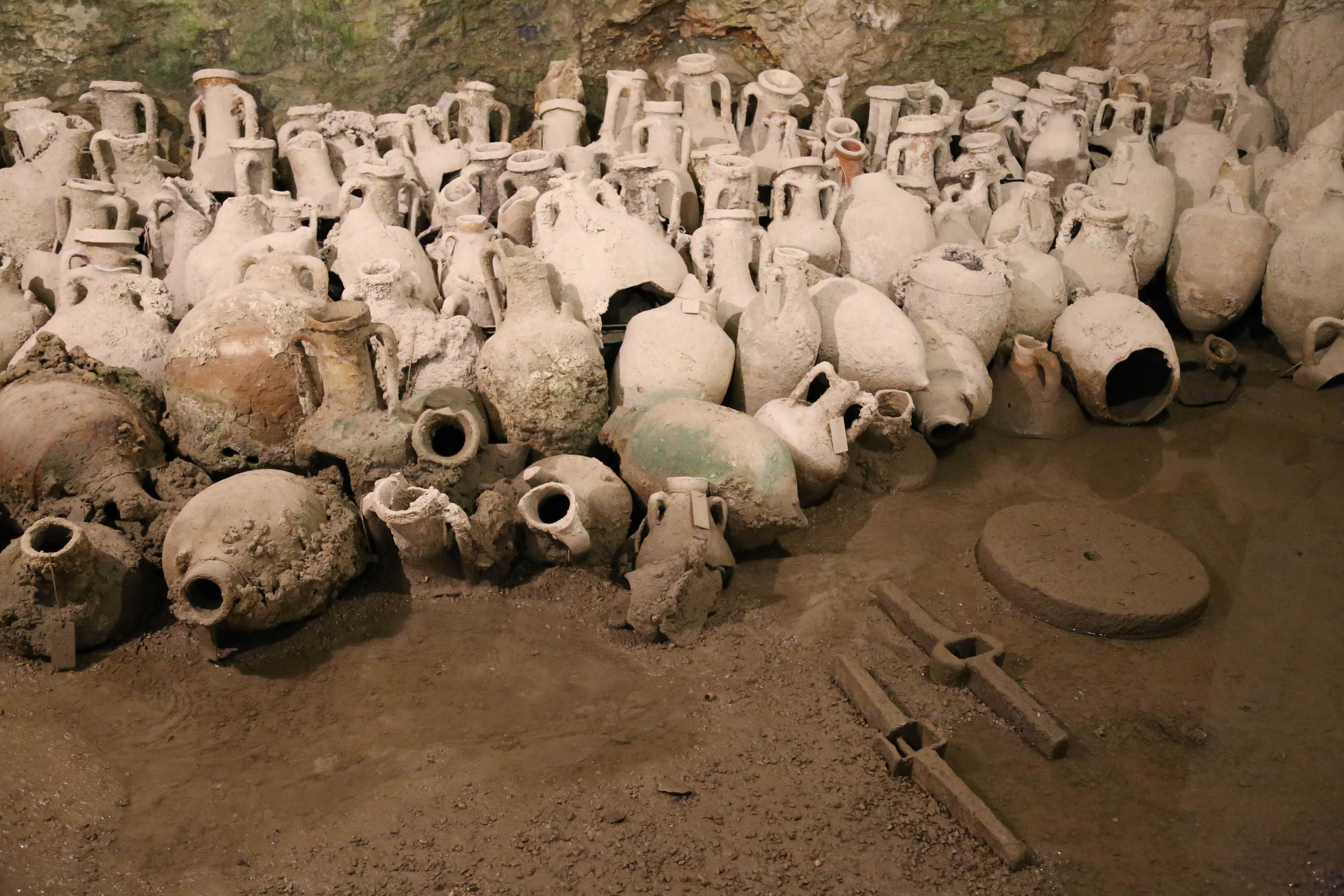 Below the coliseum in Pula is a museum that includes this impressive collection of amphorae, showing some of the sizes and shapes of the containers. 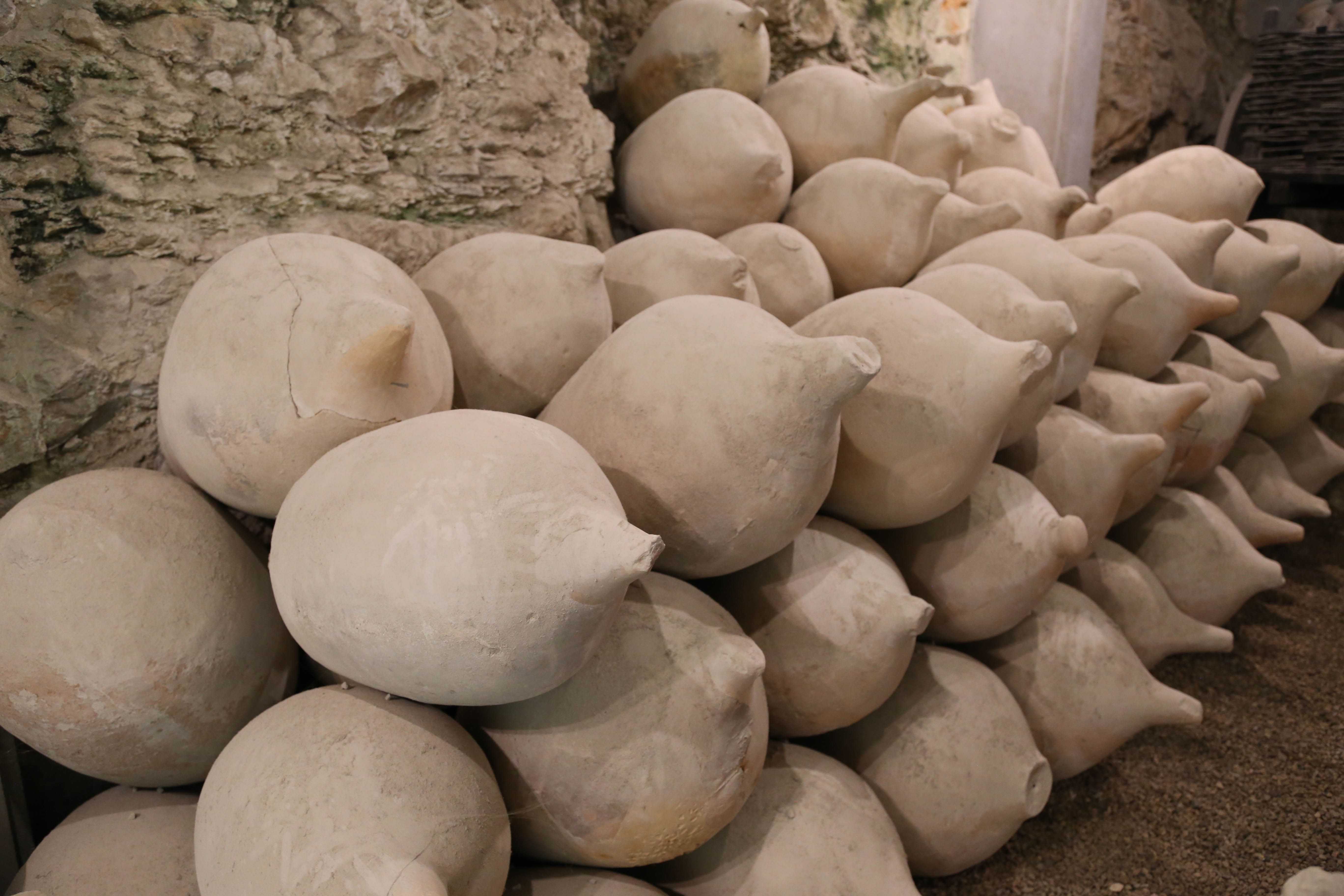 A pile of containers stacked as they might have been in the hold of a ship.

For more information about Rovinj, Pula, and the Istrian Peninsula, click over to these websites: