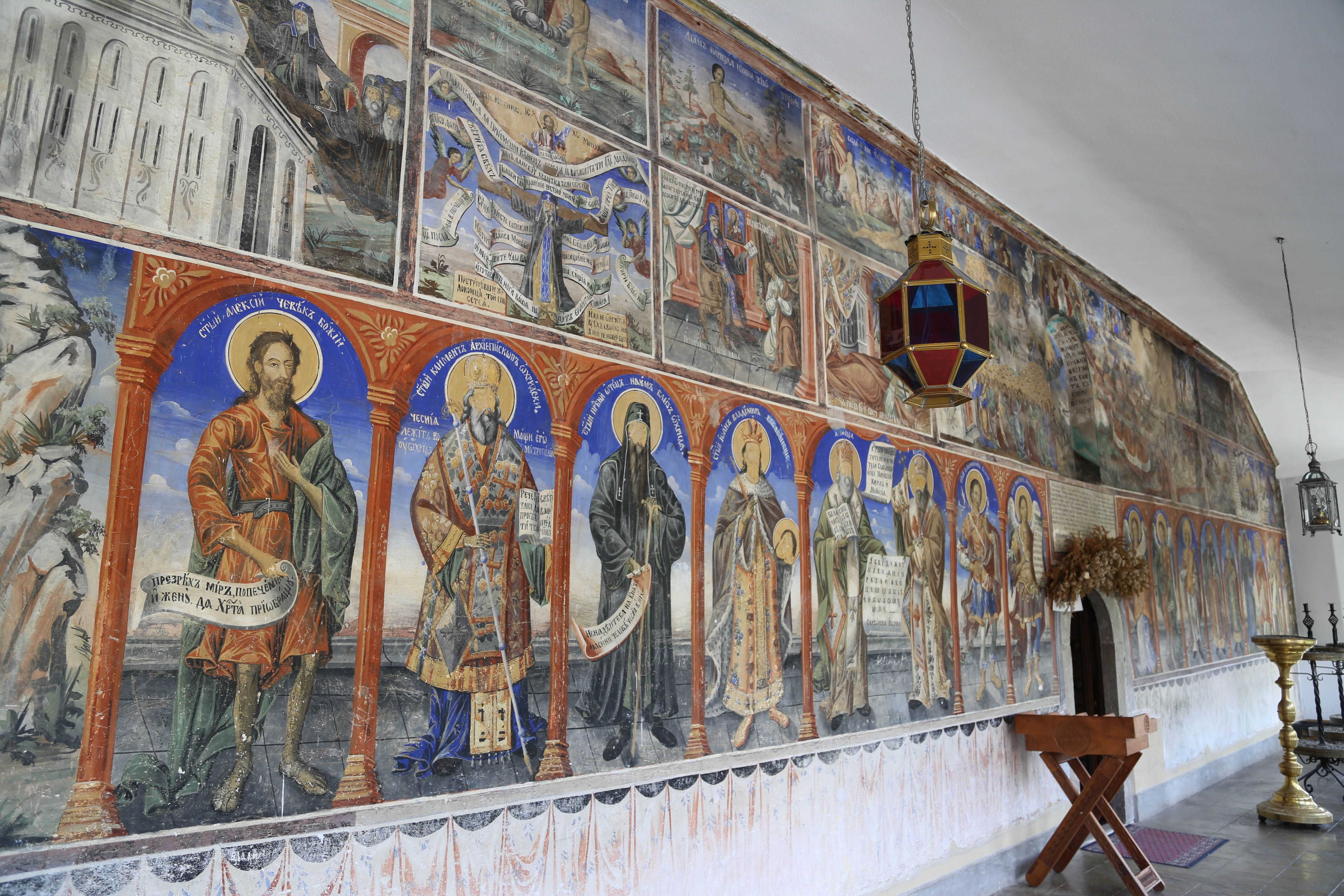 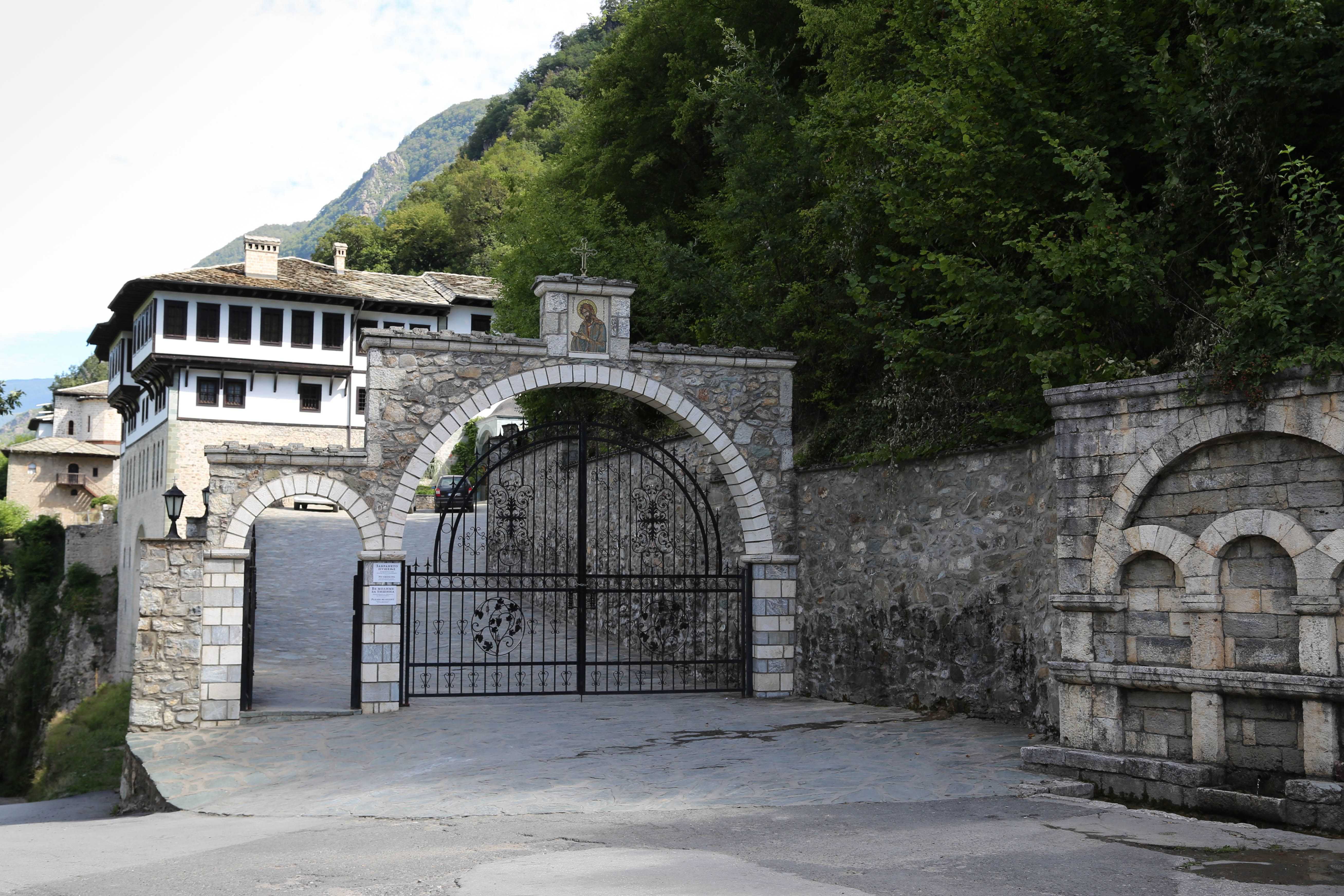 Saint Jovan Bigorski monastery is located on a protected hillside in a remote corner of Macedonia. 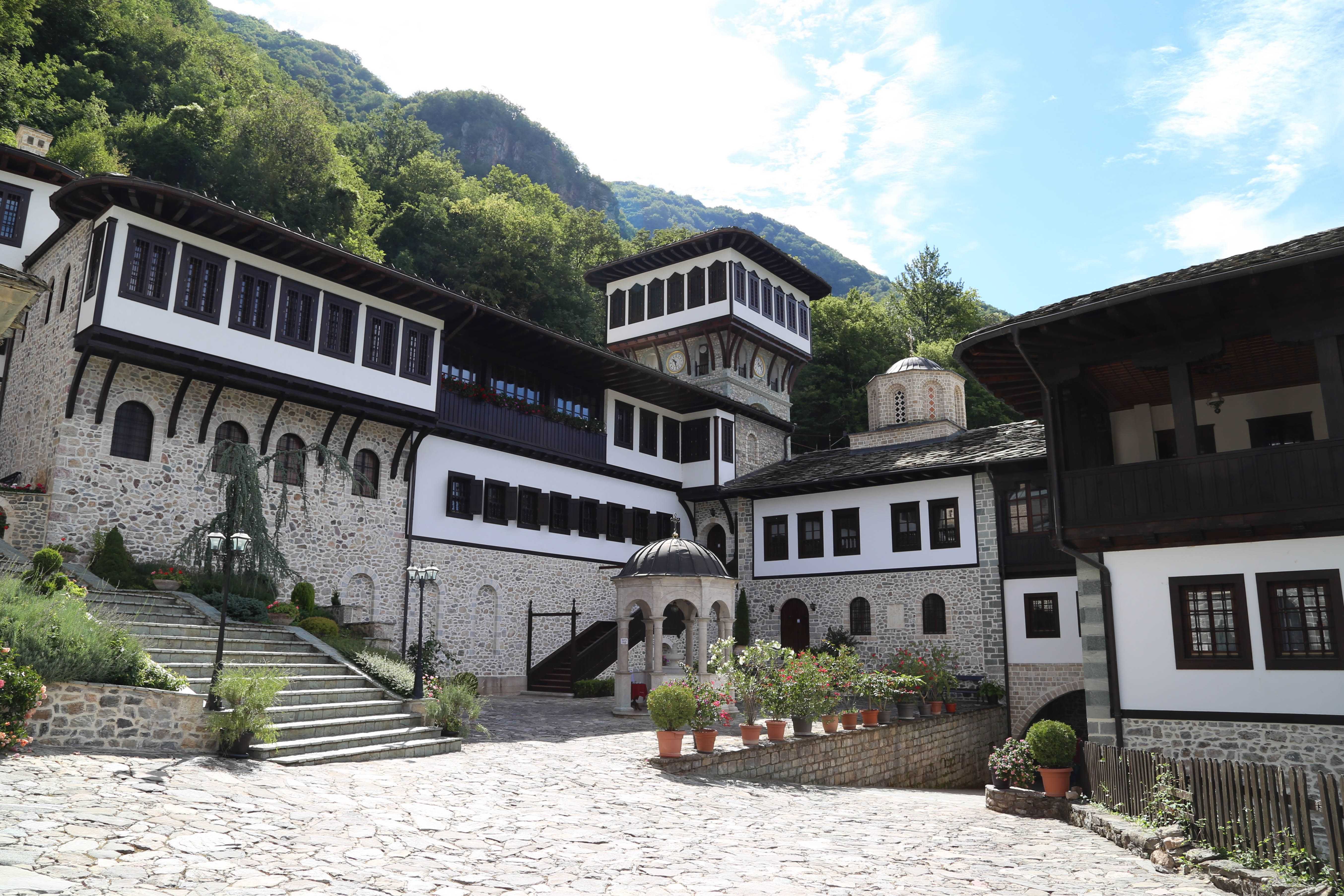 For nearly 10 centuries the monastery has served as an anchor of Orthodox faith in this part of Macedonia.

The northwest corner of Macedonia, about three miles from the Albanian border, is remote, rugged, wild, and mountainous, filled with lush forests, and dotted with small villages. It is also the home of an enclave of dedicated Macedonian Orthodox monks who have been nurturing their faith for nearly 1,000 years while they struggle for identity and recognition. 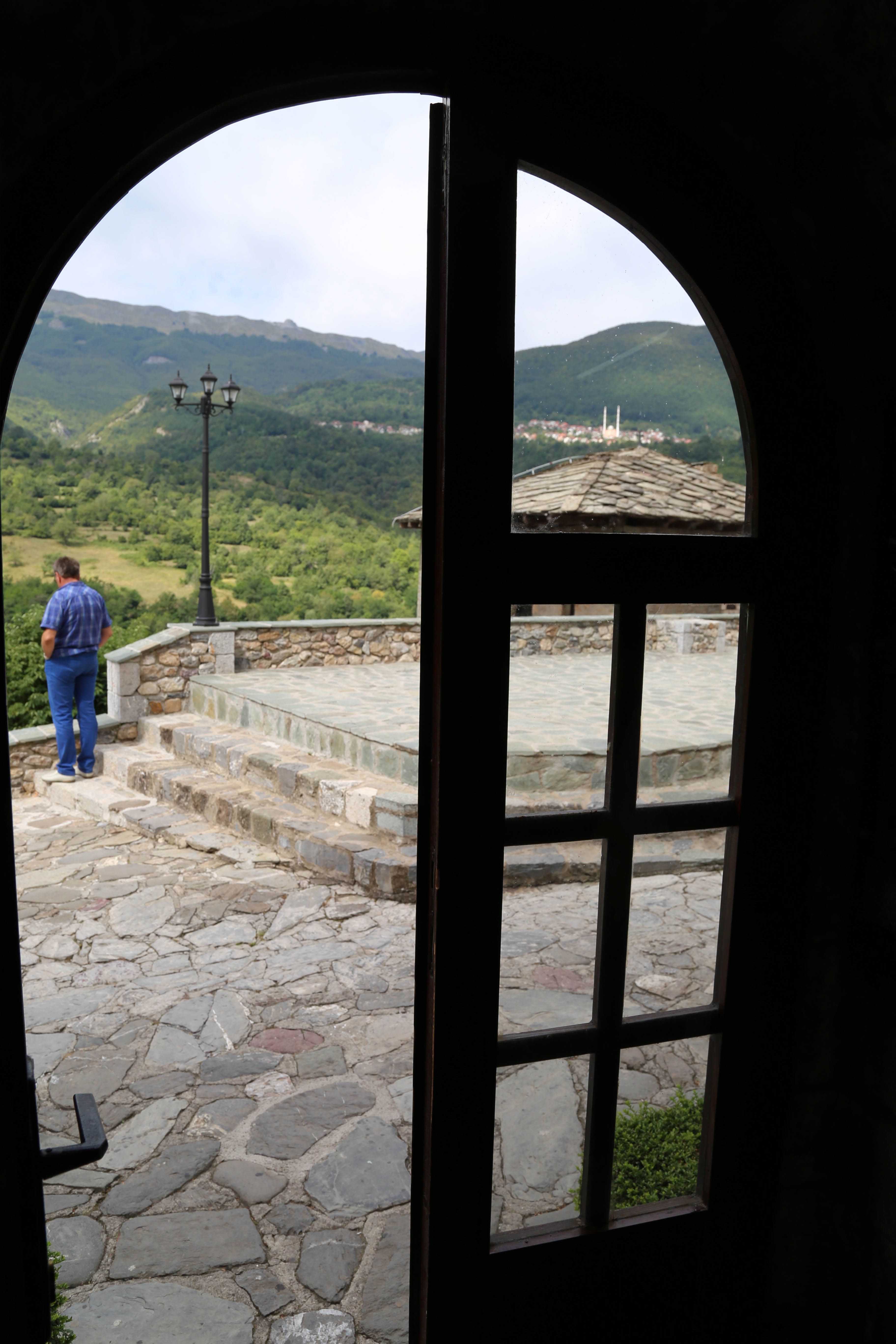 A visitor pauses to take in the beauty of the countryside below the monastery.

On the slopes of Mt. Bistra, near the small town of Debar, Saint Jovan Bigorski Monastery was established in 1021, according to historical records. Debar’s proximity to Albania means that even today Albanians outnumber the Macedonians in a town of less than 15,000 people. 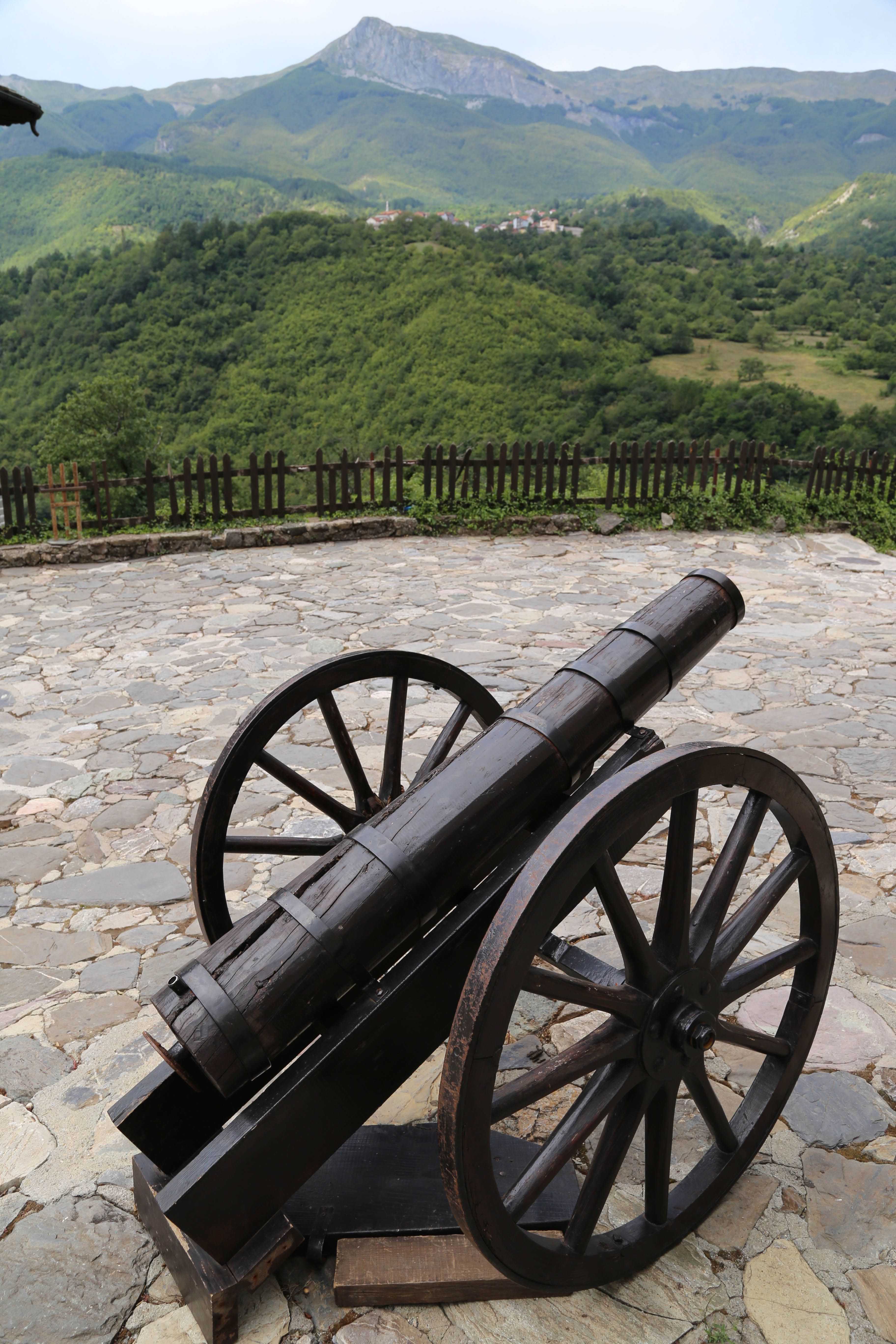 The monastery is a place of peace dedicated to the adoration of God, but sometimes keeping the faith meant defending it. This wooden cannon, held together by bands of metal, is evidence that the monks and faithful were willing to shed blood to protect this house of worship. 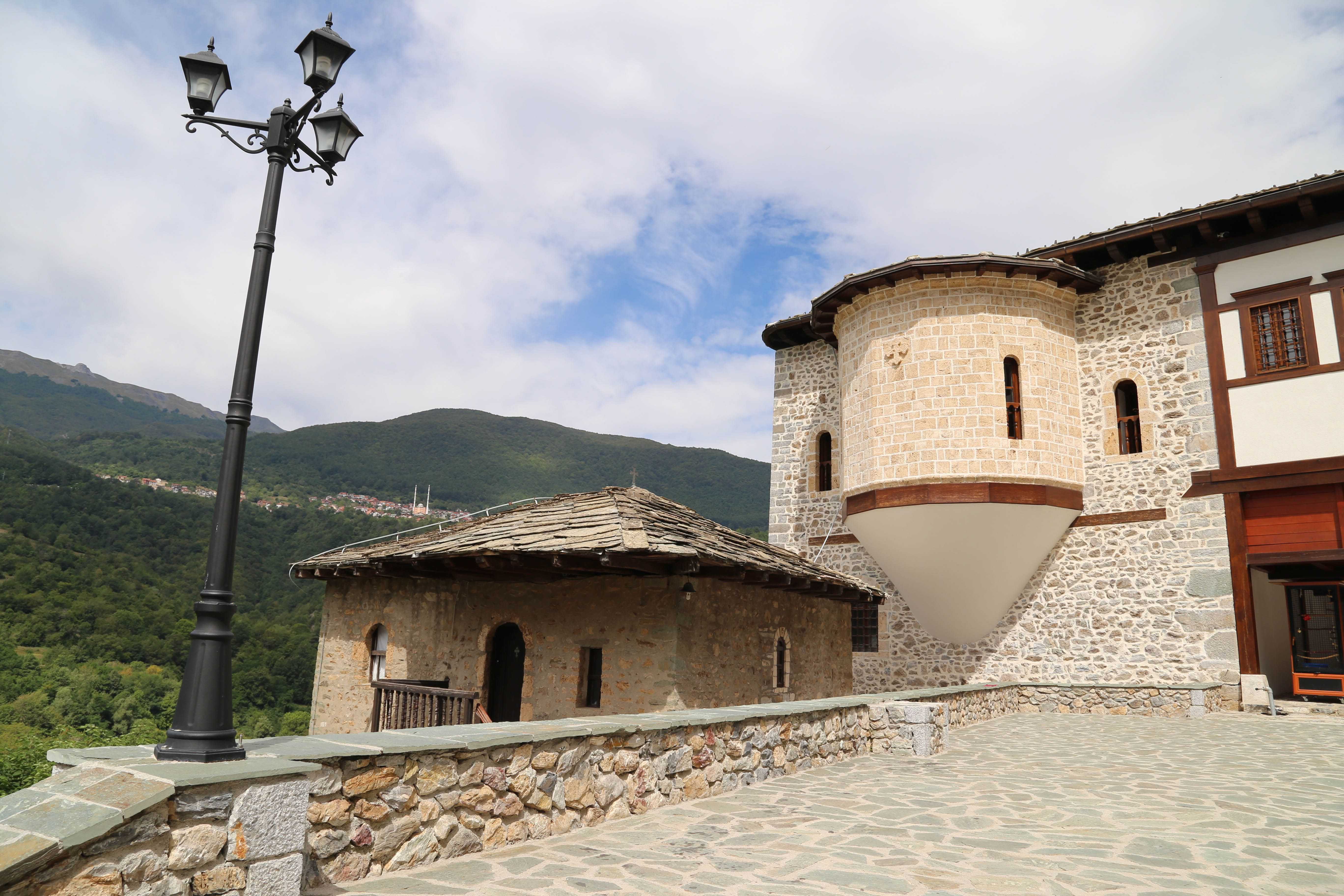 Tall narrow windows high up offered a good vantage point to keep an eye on the area below the monastery.

The establishment of Saint Jovan Bigorski (John the Baptist) Monastery came during a crucial period in the western religious world, as lines of disagreement were drawn between Roman Catholics and the Eastern Orthodox Church. To a nonbeliever, the disputes might appear trivial, but the two factions took it all very seriously. Those who practiced the Orthodox faith disagreed with Catholics who believe the pope was both infallible and supreme, that the Holy Spirit derived from both God and Jesus Christ, the Virgin Mary was a key element of Catholic faith, how one blesses themselves in the sign of the cross, and even the language to be spoken at church services – Latin for Catholics or Greek for the Orthodox. These and other seemingly esoteric notions of what constitutes the canons of a legitimate church comprised much of the schism between the two religions. 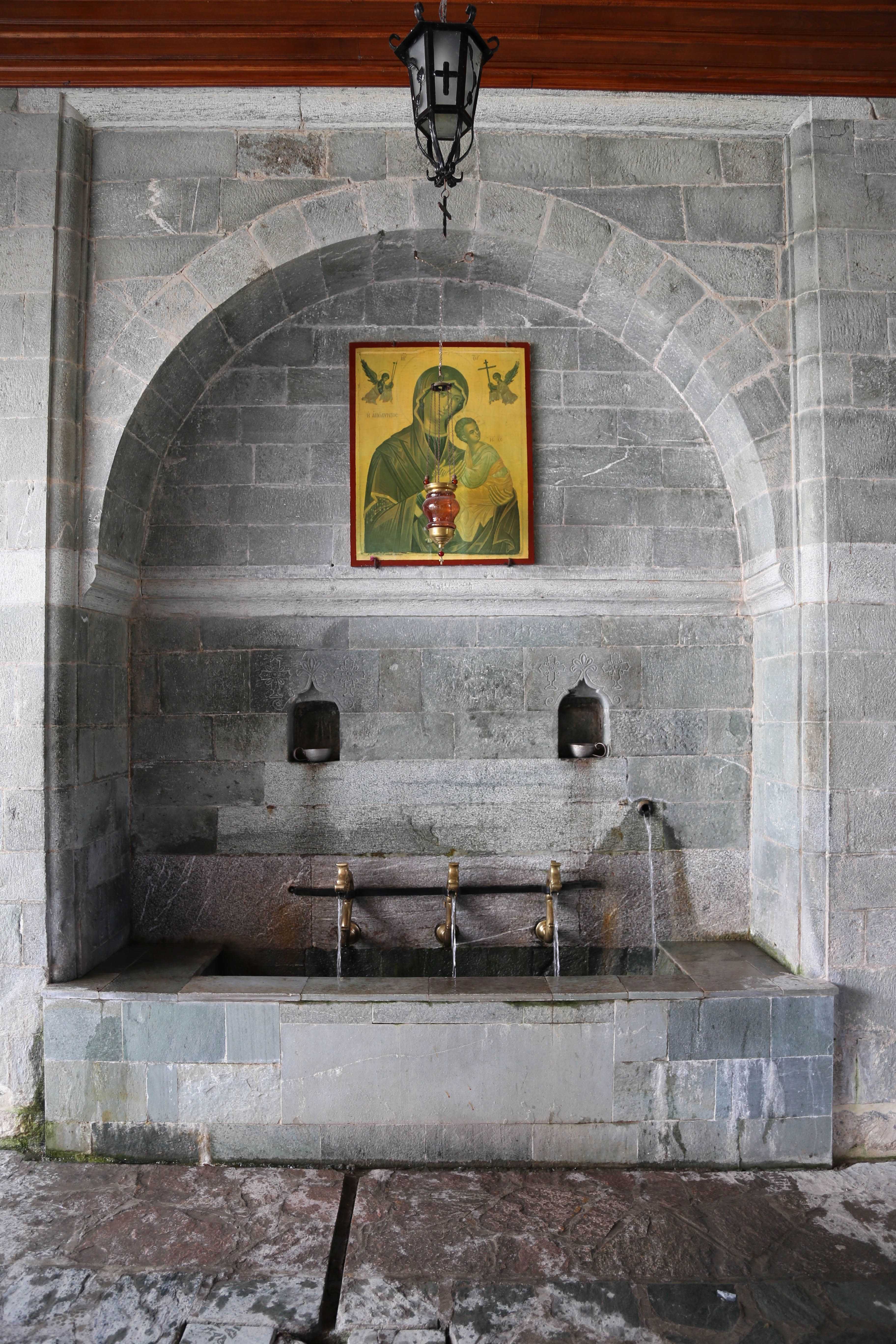 The Virgin Mary cradles an infant Jesus, flanked by a pair of angels, as they keep watch over a set of faucets that supply water. 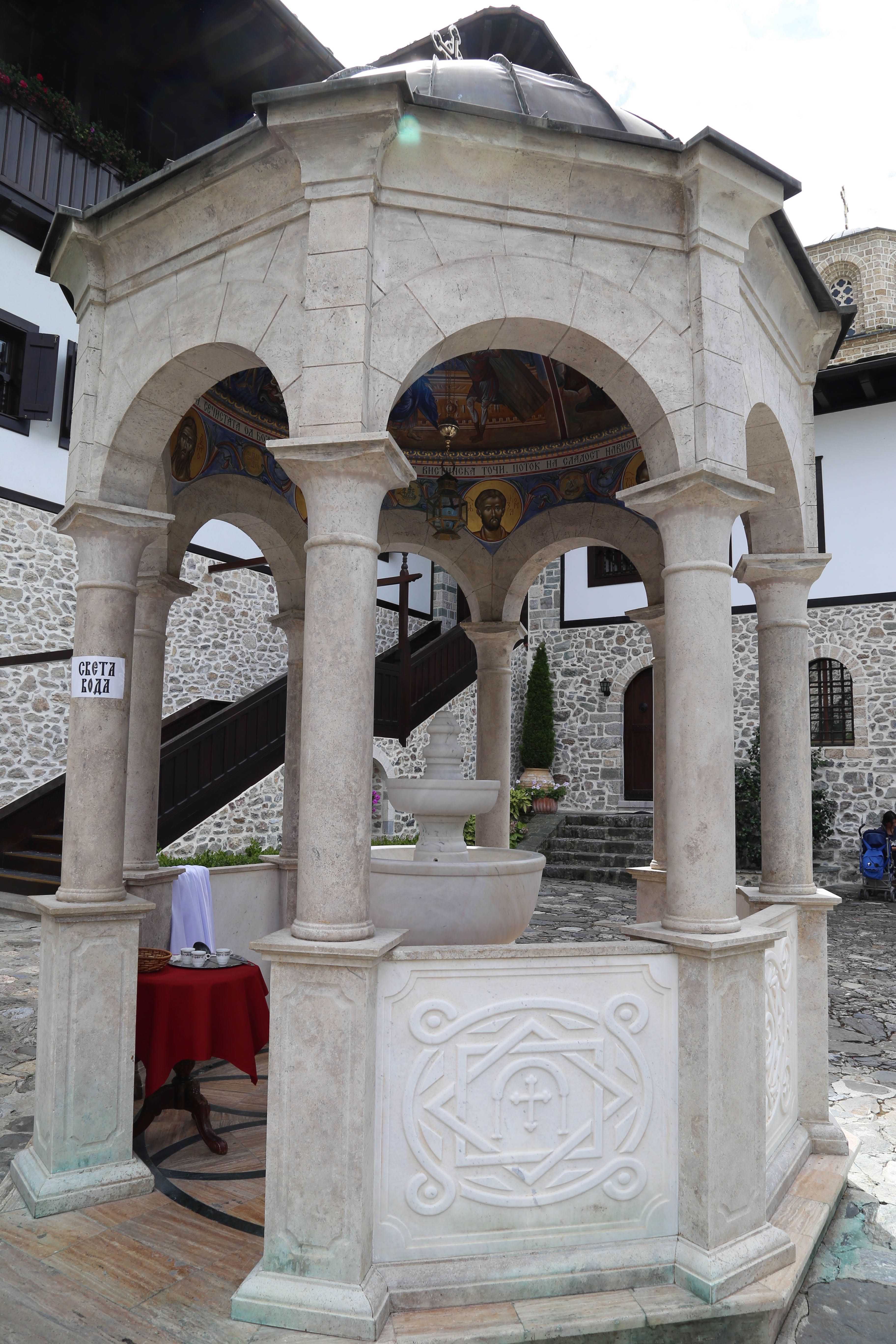 This gazebo is located in the main courtyard and offers a place for contemplation and reflection on the wonders of faith.

Arguing about who was right festered to the point that an official schism between Catholics and members of the Greek Orthodox faith occurred in 1054. Saint Jovan Bigorski Monastery continued its effort to preach the Orthodox faith, and the monastery was placed under the auspices of the Serbian Orthodox bishopric. 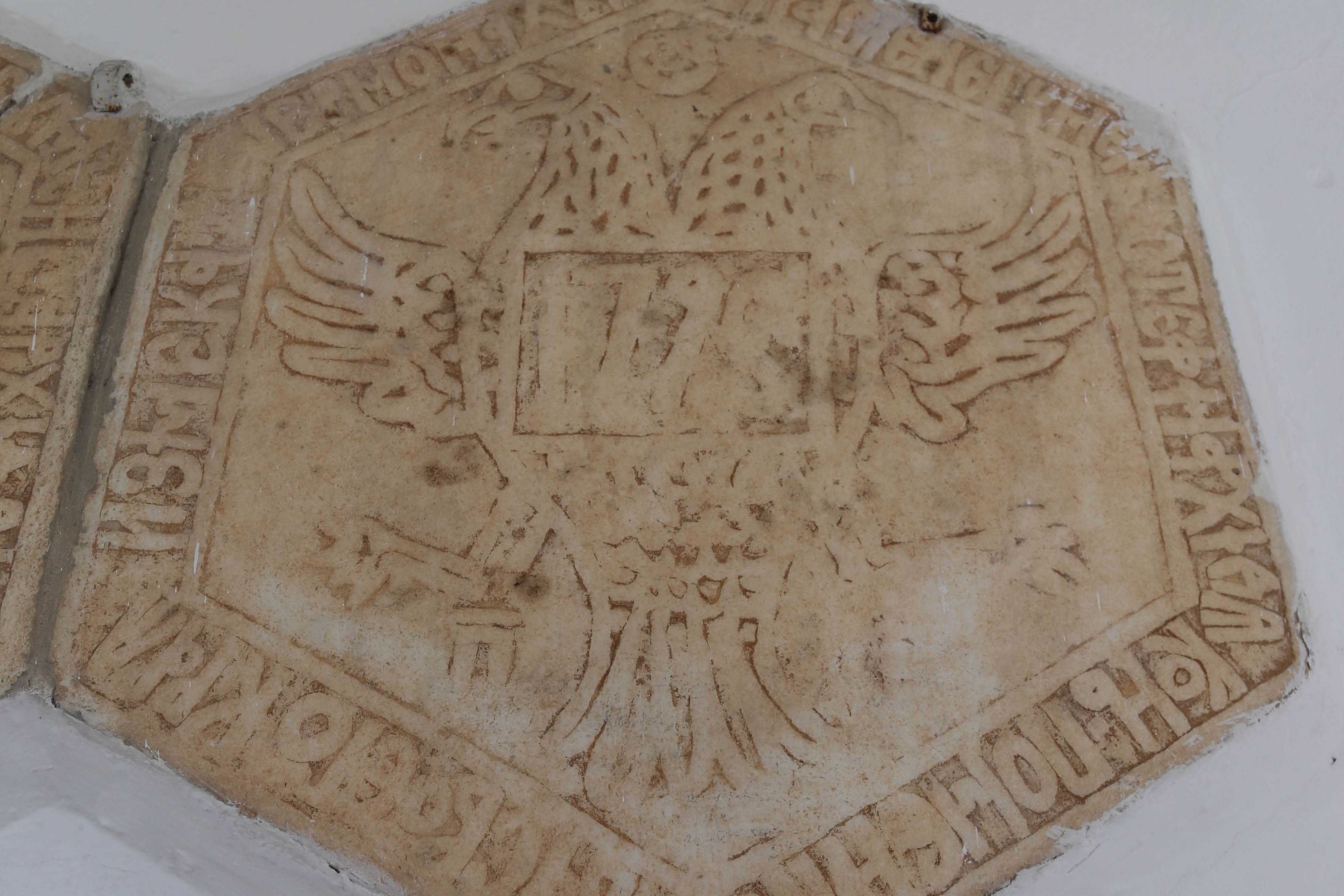 The double-headed eagle is a symbol of Orthodoxy. Note the date 1795 in the center of the medallion.

From a different quarter, the Ottoman Empire pursued expansion of its realm and the spread of the Muslim faith; in the 16th Century Saint Jovan Bigorski Monastery would be destroyed by Ottoman Turks. But the monks and faithful members of the church were determined to carry on, and the church and buildings were restored by 1743. The restoration no doubt re-energized the monks and the parishioners because Saint Jovan Bigorski Monastery was further expanded in the early 1800s. But regional and world events would continue to cast a pall over the pursuit of peace and faith. 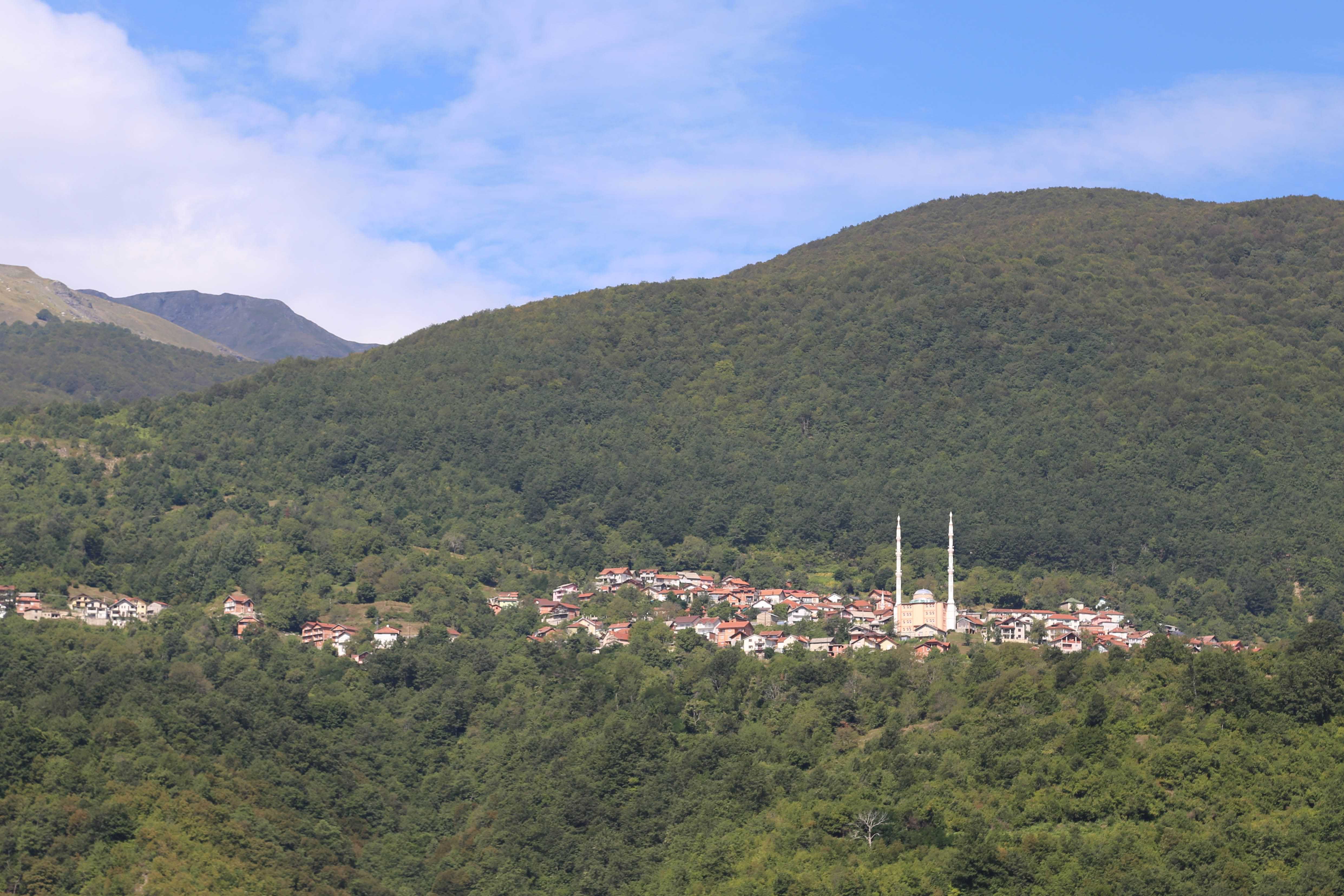 In a small village on the other side of the valley from Saint Jovan Bigorski sits a newly-built mosque. For many centuries this region of the world has been home to Muslims, Jews, and those of the Orthodox faith. 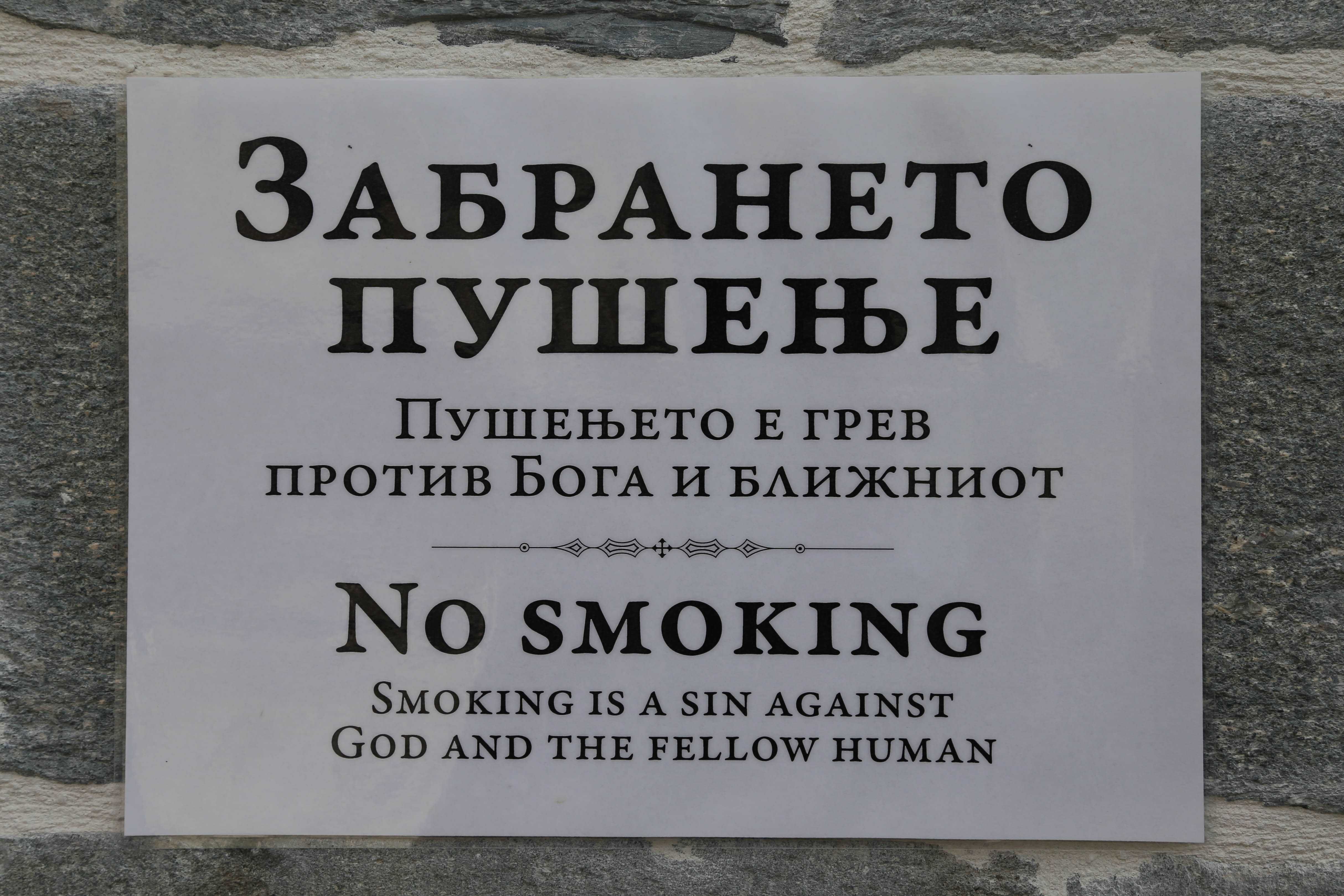 No matter the language, this sign says it all.

To put this in a broader perspective, Macedonia is an ancient land that has struggled to rule itself. It has been conquered and liberated for more than two thousand years. Romans, Turks, Bulgarians, Serbs, and other Slavic peoples have laid claim to the area and called it their own. As far back as the 6th Century B.C. Persians ruled Macedonia. In the 14th Century A.D. Macedonia was under the control of the Ottoman Empire, and by the early 1900s Macedonia fell under Serbian rule. At the end of World War I, Macedonia was subsumed into Greater Yugoslavia, until Macedonia peacefully became independent in 1991. Even the name Macedonia has been a 30-year dispute, because Greece protested calling the nation by the same name as a northern region of Greece, also called Macedonia. But as recently as June 2018, the two nations signed an agreement to change the name from the Former Yugoslav Republic of Macedonia (FYROM) to the Republic of North Macedonia. 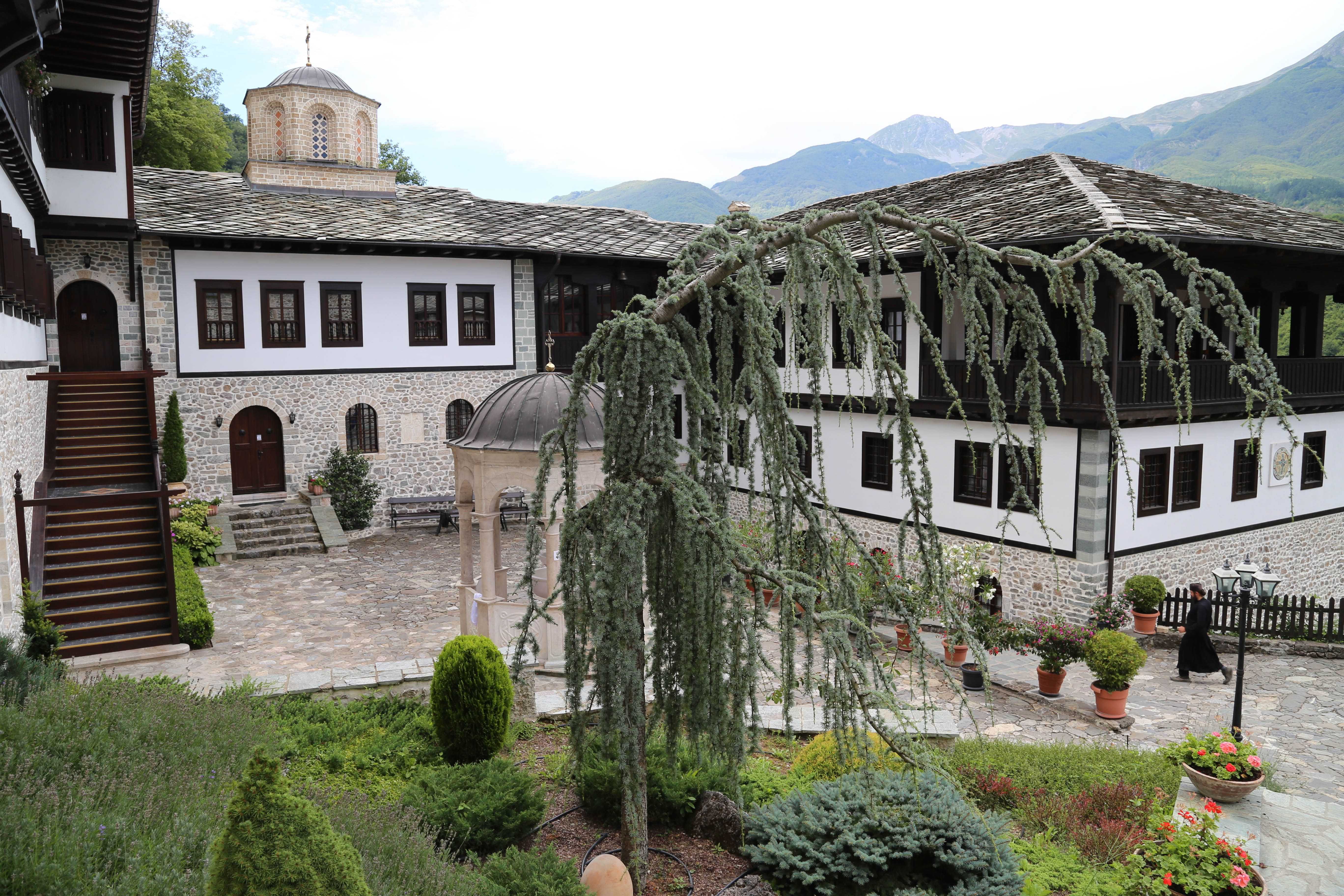 The courtyard and garden, like all of Saint Jovan Bigorski looks calm and serene, but in 2009 a fire ravaged much of the monastery. A major rebuilding campaign restored the buildings and gave this outpost of Orthodox faith a new lease on life. 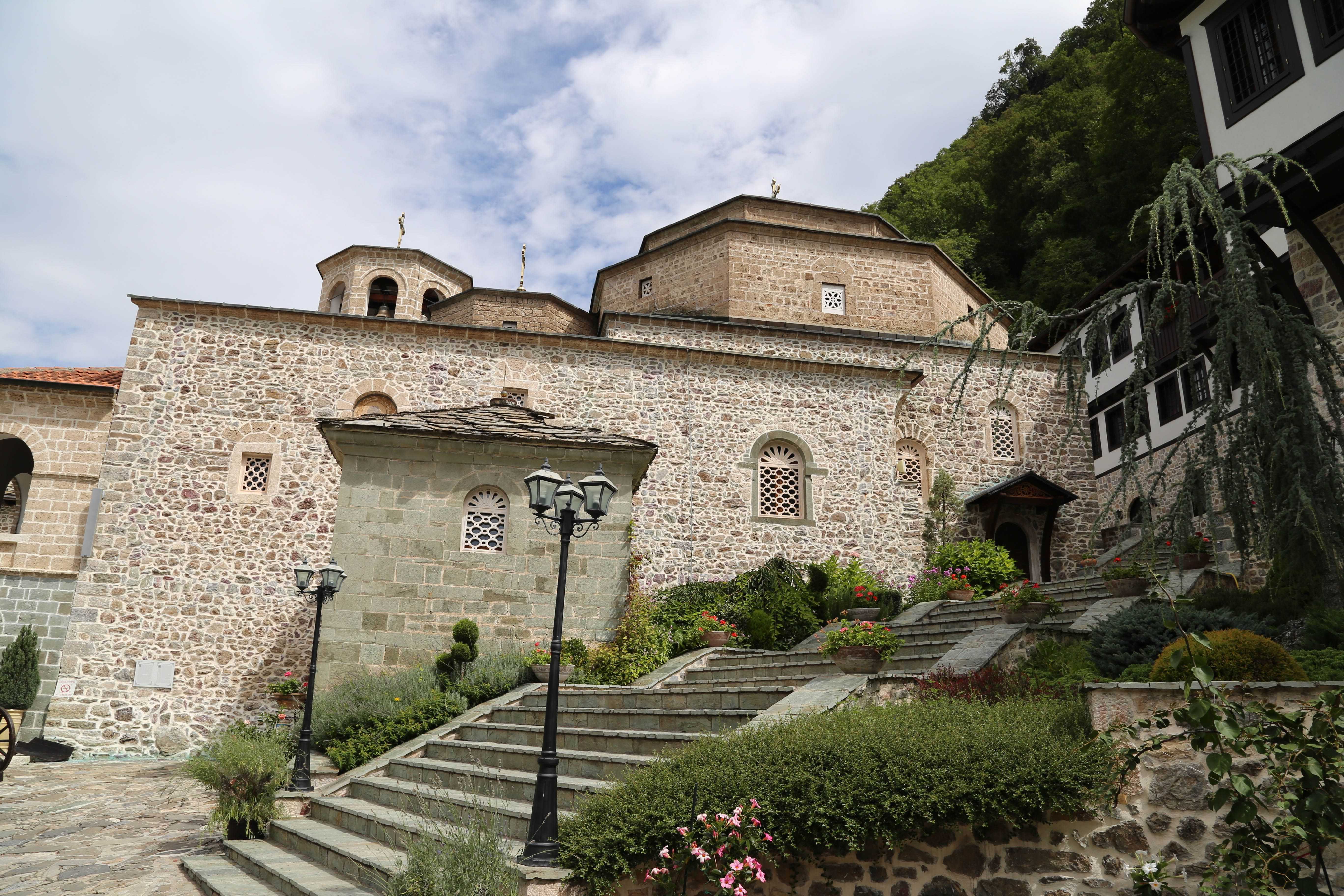 Stairs lead from the entryway and courtyard to the chapel.

Despite all the turmoil during these many centuries, the monastery has continued to operate. Saint Jovan Bigorski Monastery managed to go along without incident until 2009 when much of the complex was ravaged by fire. A rebuilding effort began the following year and today the facility retains the beauty and charm of its original design but with updated structures. 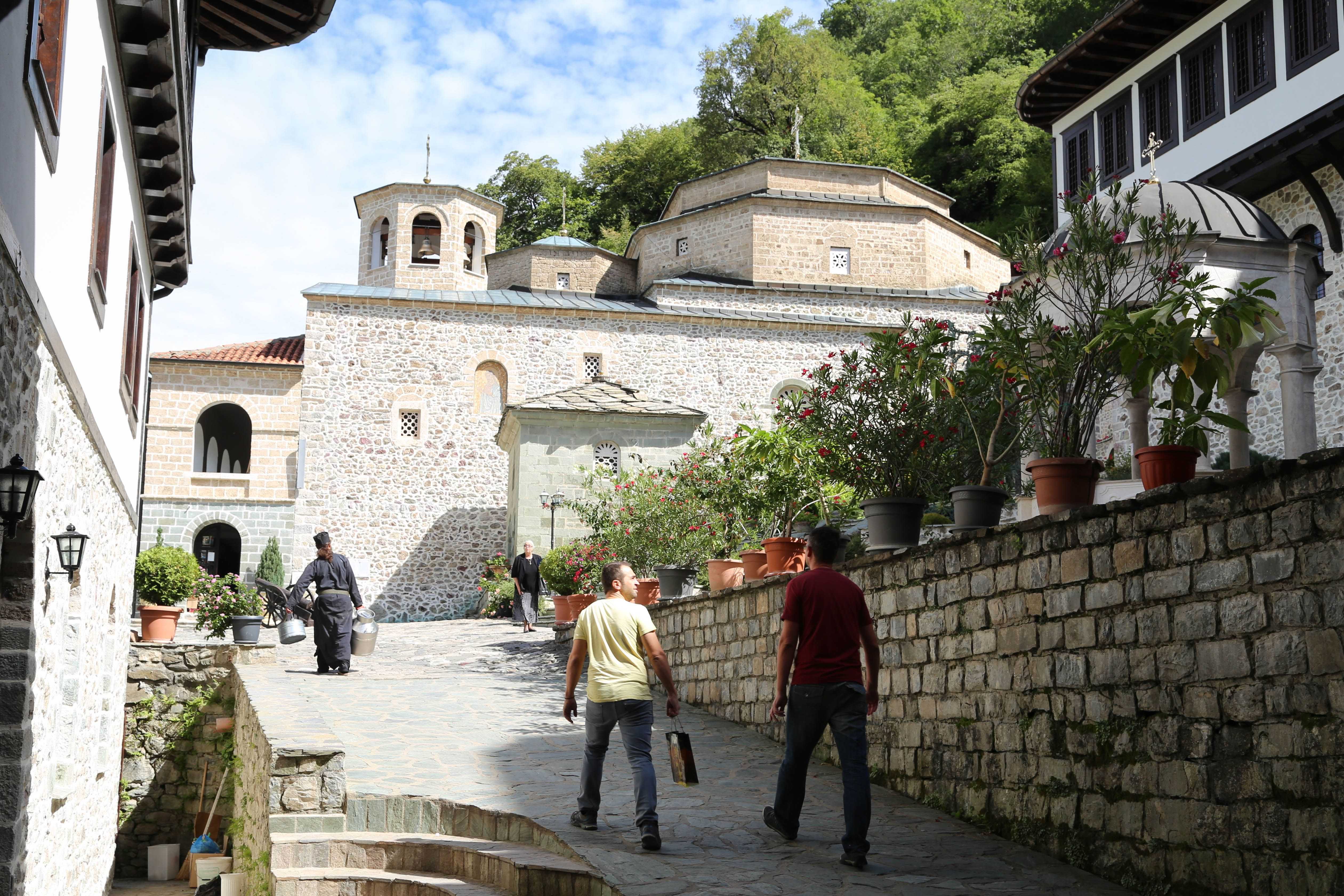 A monk, wearing his traditional black robe, left, carries containers as visitors stroll the grounds of the monastery. 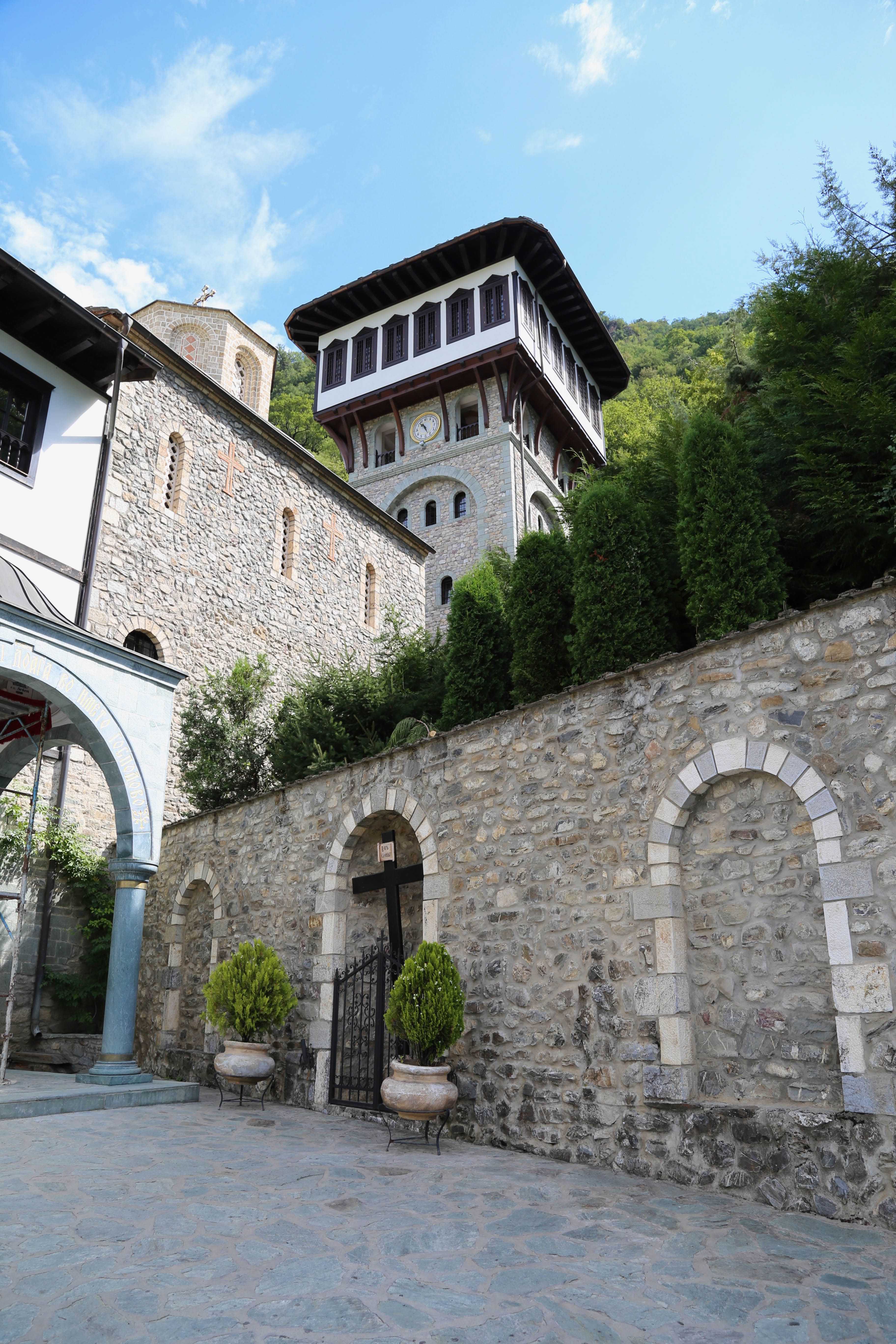 The grounds of the monastery are beautifully laid out and the buildings are finished with subtle details and touches.

The monastery is notable for several significant religious relics, including some of John the Baptist, a number of other saints, and other important people of the Orthodox faith. Also, the monastery has an icon dating back to 1020 that is reputed to have the power of miraculous healing. And Saint Jovan Bigorski Monastery also has one of the most impressive examples of iconostasis – a wall of religious paintings that separates the church nave from the sanctuary – in the Orthodox faith. 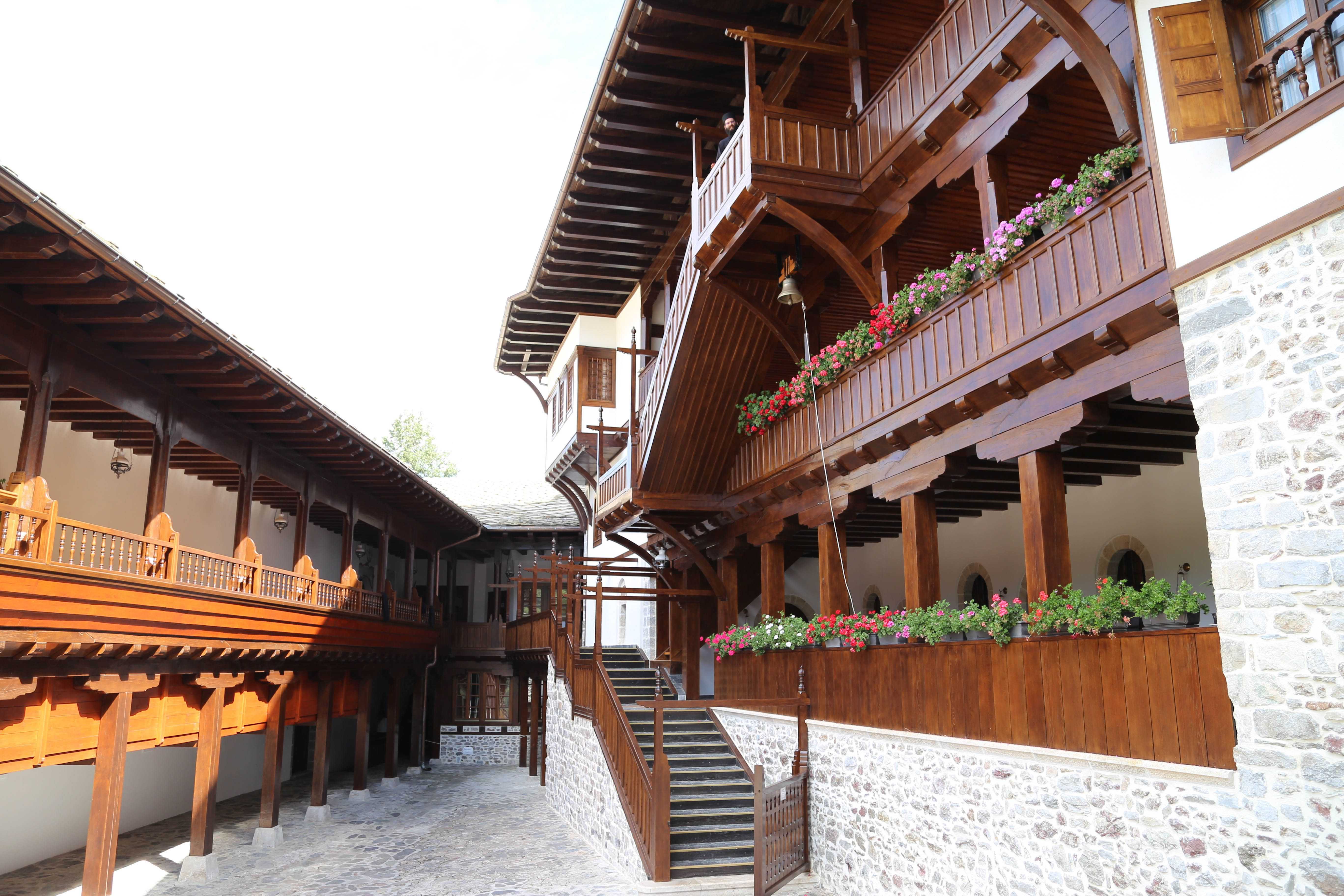 With this much wood, it’s easy to see why a fire in 2009 might have nearly destroyed the entire monastery. Today the complex looks fresh and new.

The complex houses some 60 people, about half of whom are monks. Visitors are welcome and there are facilities for overnight guests who might wish to experience the monastery’s serenity and calm. 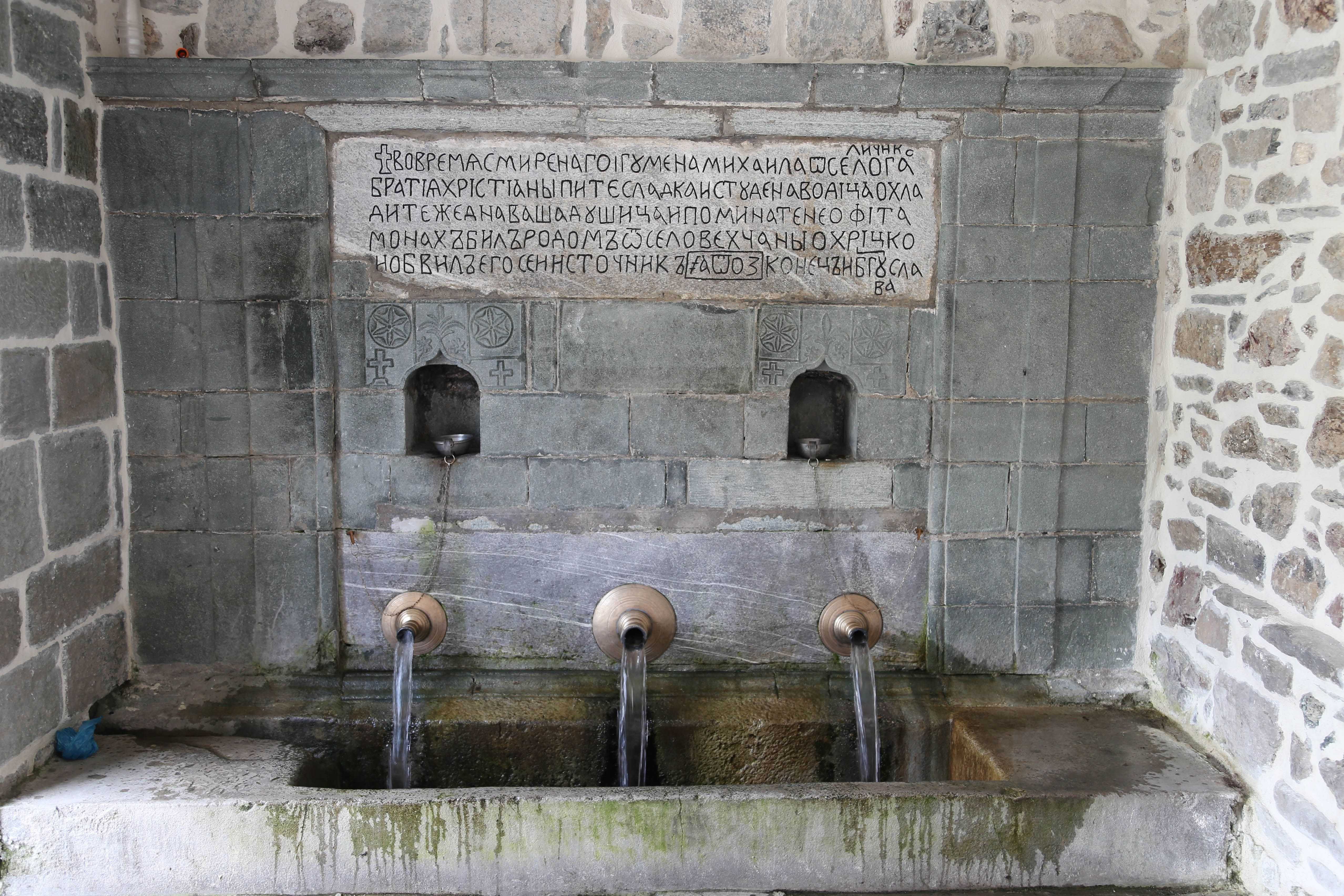 A fountain near the entrance of Saint Jovan Bigorski offers visitors and monks refreshing cool water, while the carving above the spigots undoubtedly offer scriptural advice.

Despite the appearance of peace and quiet, turmoil still persists at Saint Jovan Bigorski Monastery. The issue is one that dates as far back as the schism between Catholic and Orthodox. When the two faiths went their separate ways in 1054, Saint Jovan Bigorski Monastery was placed under the authority of the Serbian Orthodox Church. In more recent times the monastery has stated a clear desire to be classified as a Macedonian Orthodox church under the Ohrid Archbishopric, a move Serbian church masters have yet to agree to. 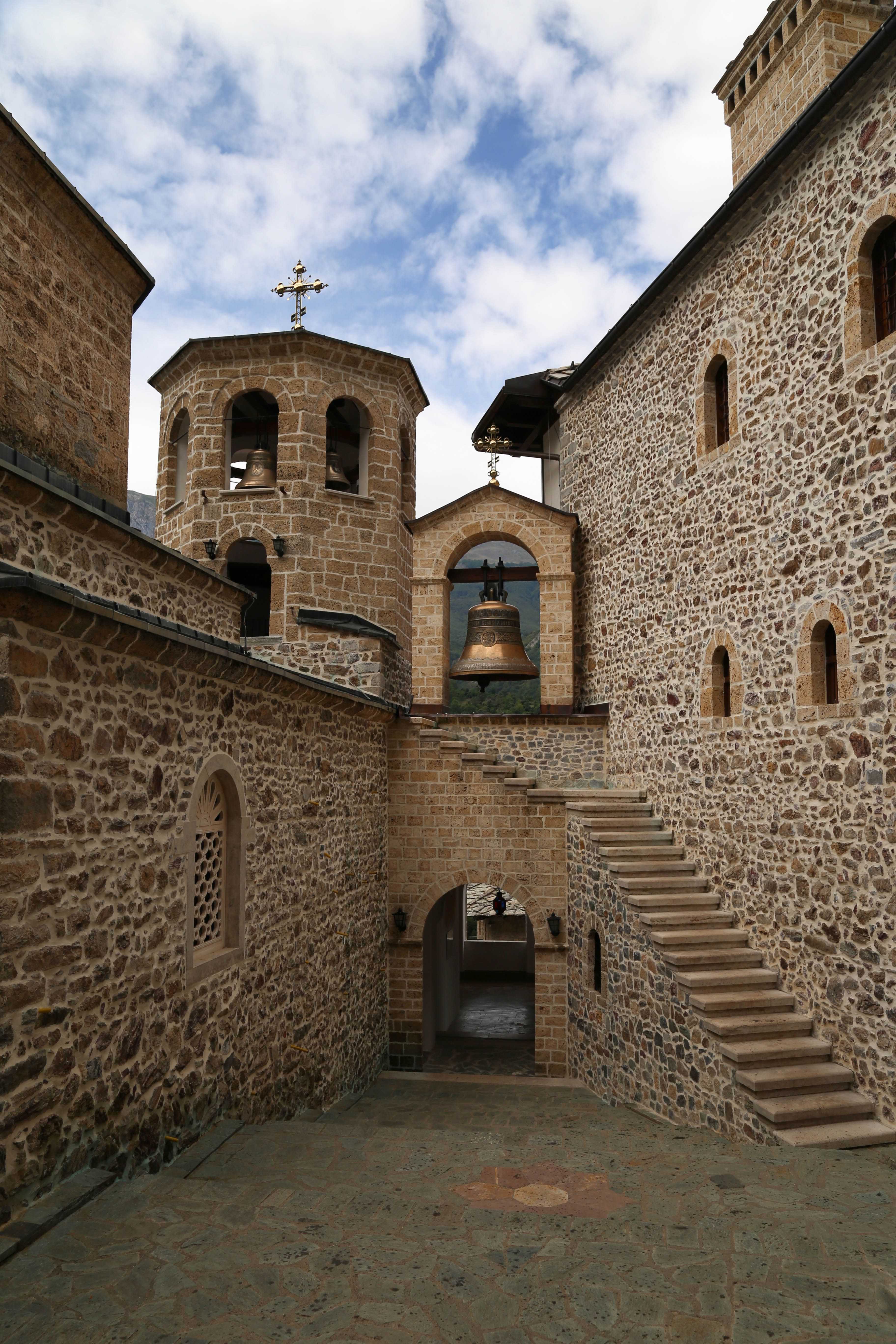 Reflecting the turbulence in centuries past, the monastery was protected by thick walls with parapets. 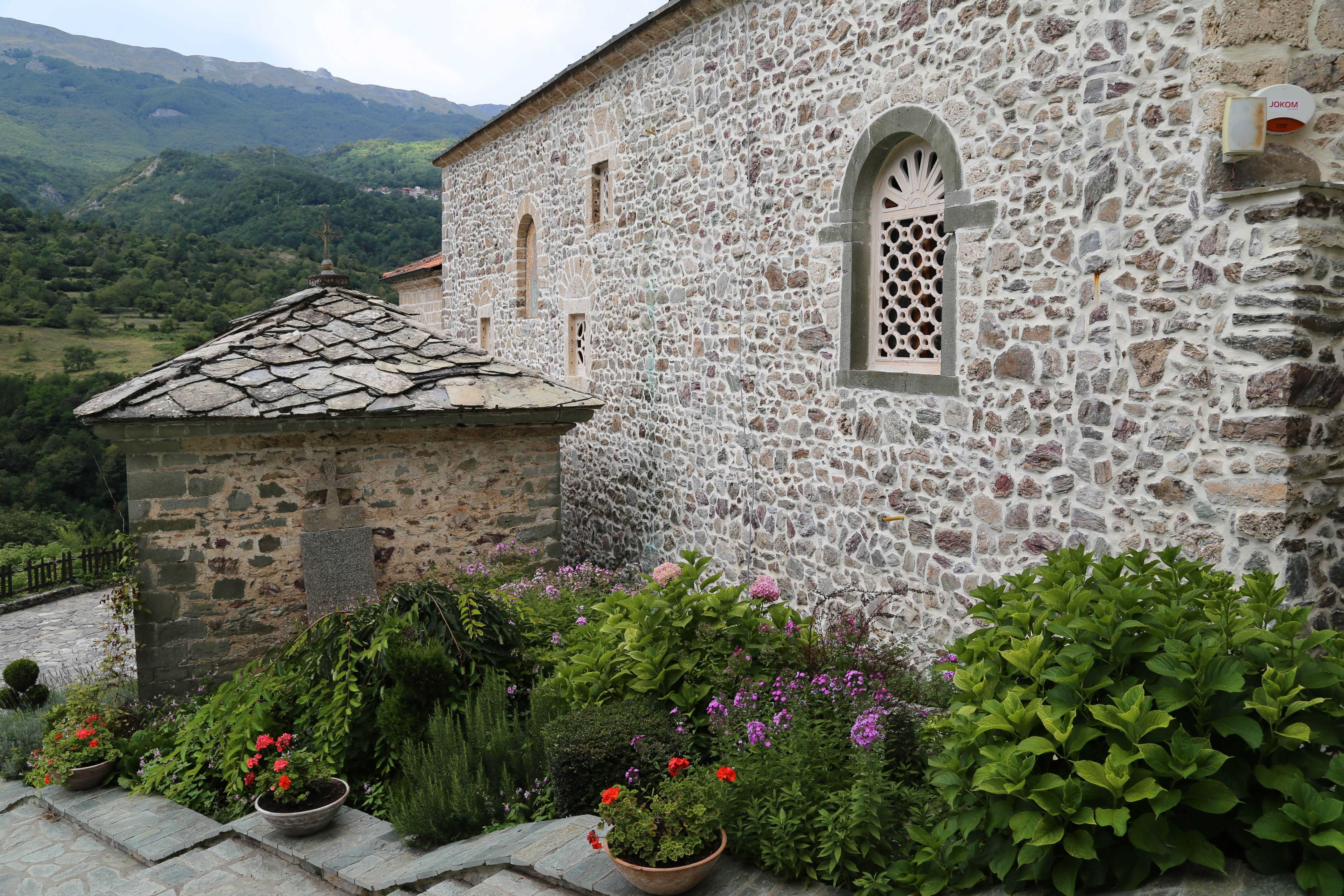 Even in a secluded location, Saint Jovan Bigorski Monastery offers glimpses of beauty and color for all to enjoy.

While Saint Jovan Bigorski Monastery deals with an undercurrent of turmoil, it continues to chart its course as a place with a strong faith in God, relics revered by Orthodox faithful, and at a place nestled on a steep hillside in the rugged mountains of western Macedonia. 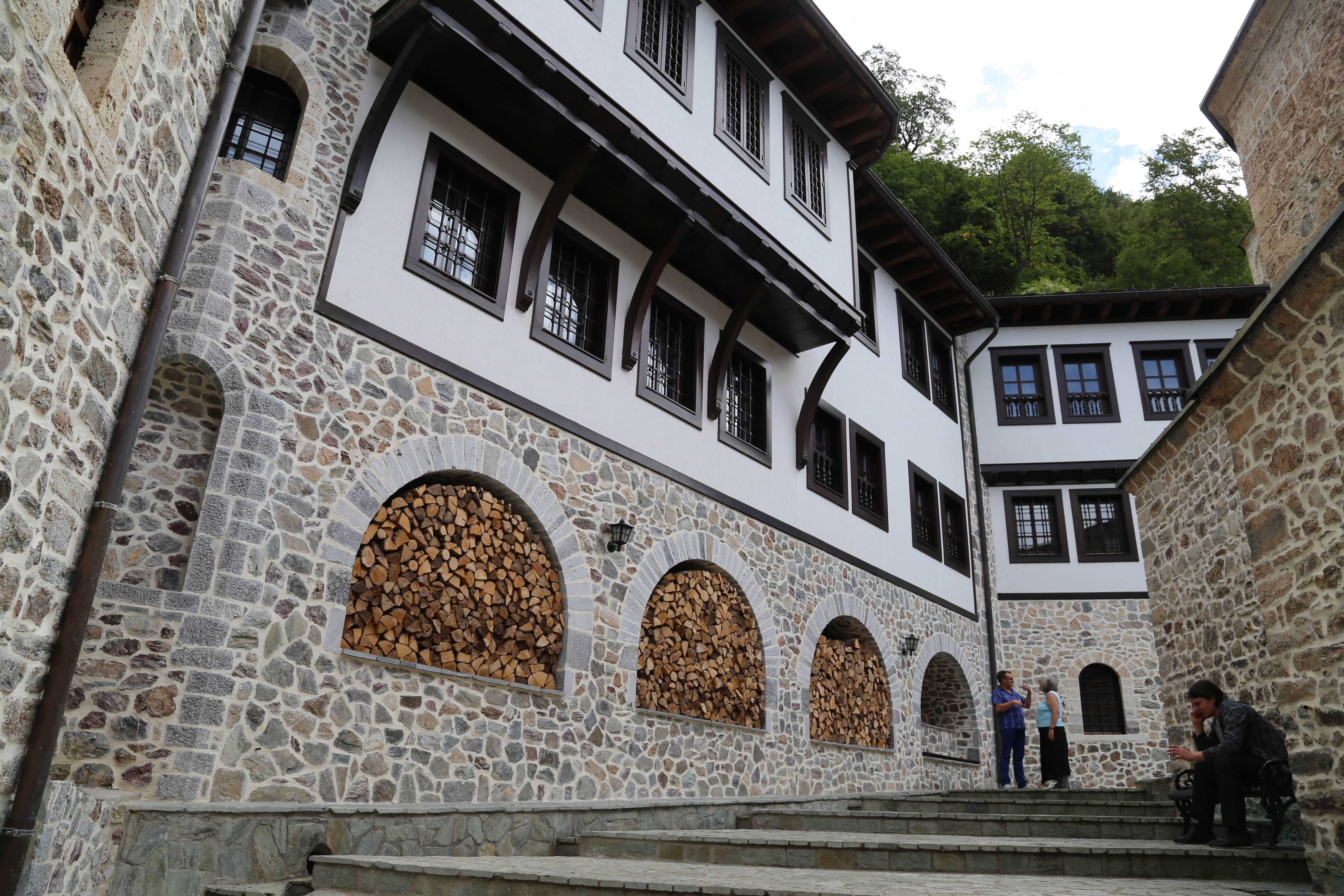 Winters in this part of Macedonia can be very cold, so it’s important to have plenty of firewood that has been dried, cut, and stacked.

For more information about Saint Jovan Bigorski, click over to these websites: