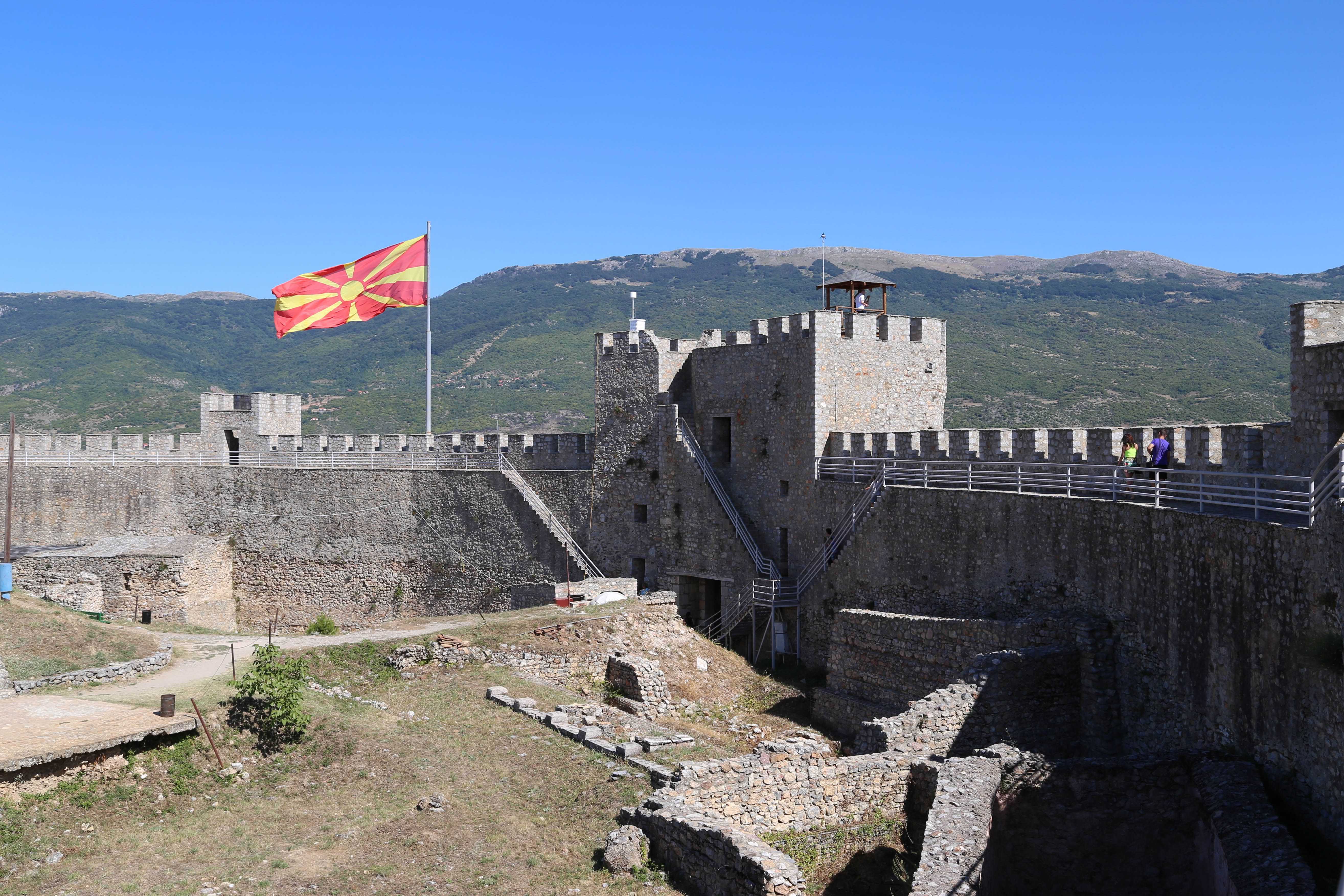 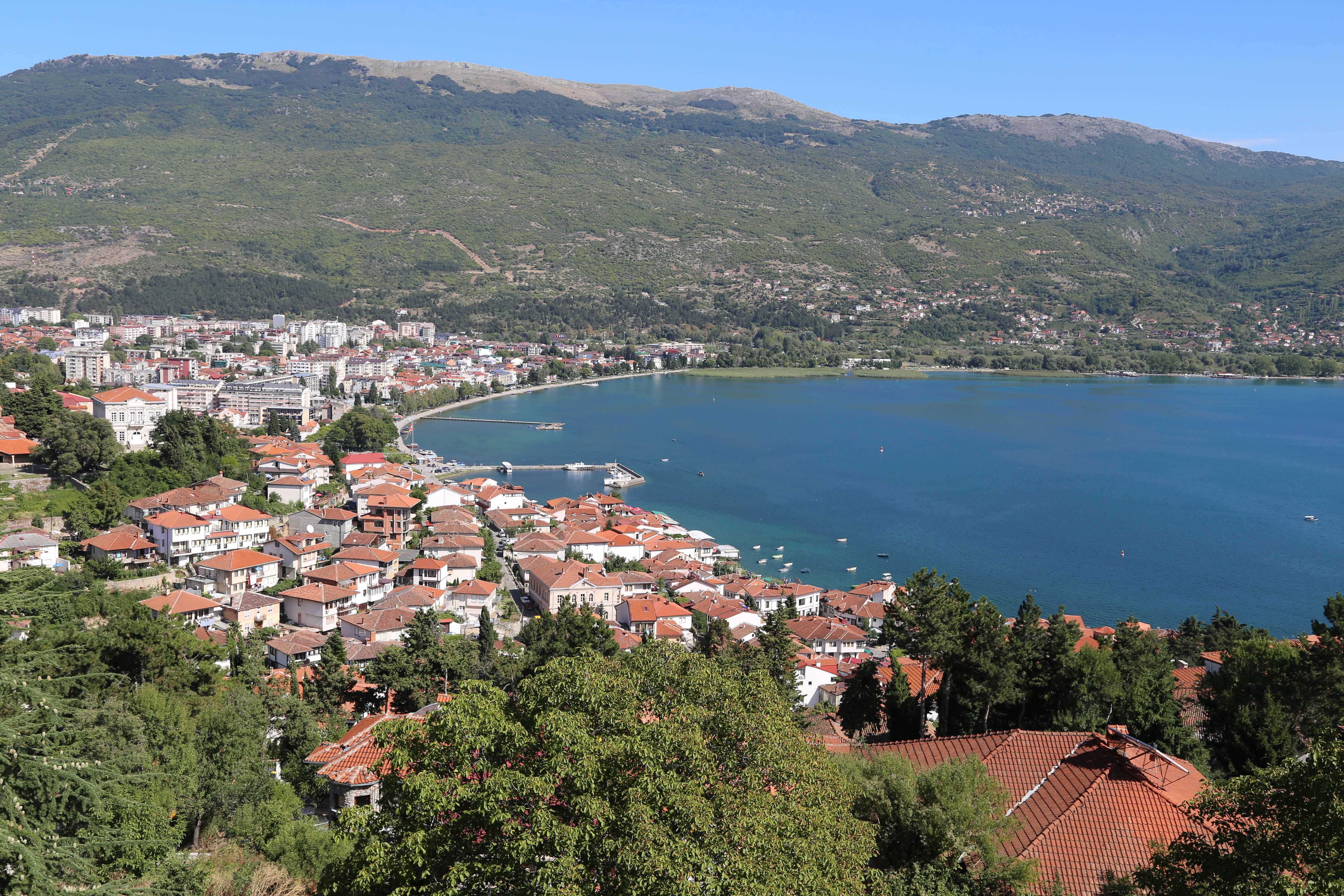 Ohrid — the name of the town and the lake has been home to people for thousands of years. 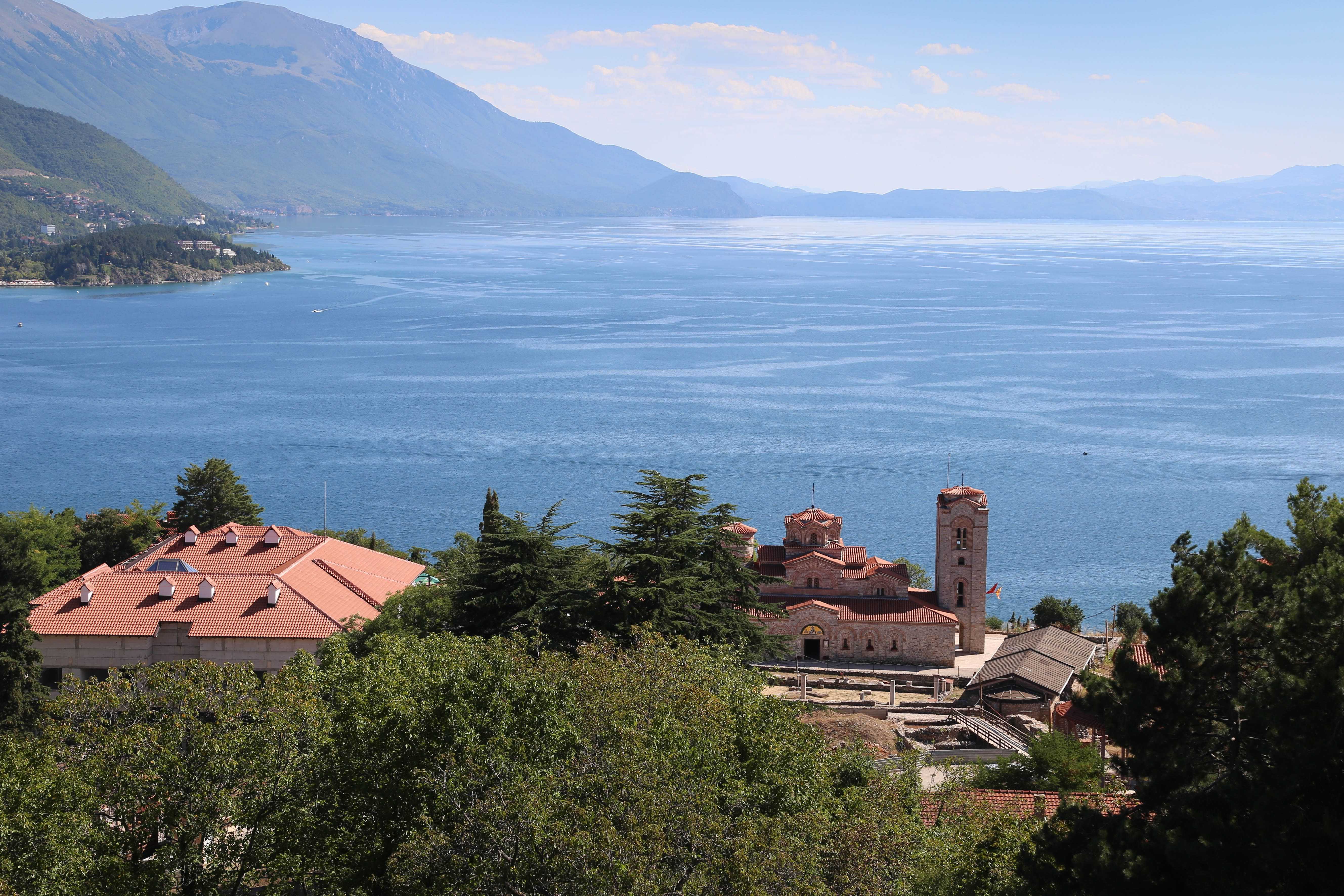 Faith in God has been a significant part of Ohrid’s history and there are a number of important Orthodox churches, like St. Clement’s Monastery, bottom right, as well as mosques.

Before history can be recorded, you need at least three things; people, stories and a system to write things down. As time marches on, clans become tribes that spawn languages that evolve into city-states, and then came the nations of the world. Macedonia may be a country with recently defined borders, but it is a region that has been inhabited as far back as Greek antiquity, and is its own fascinating story. 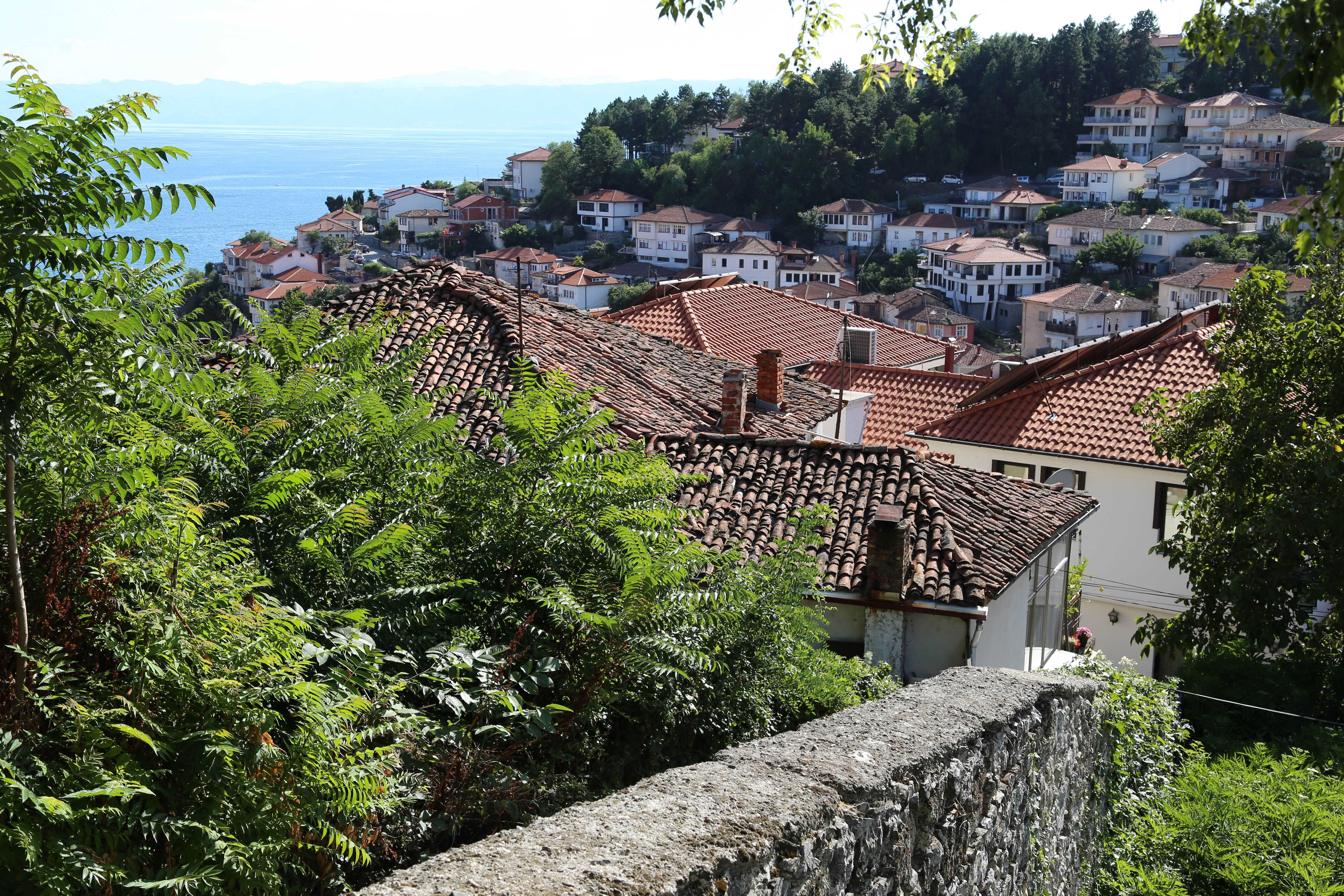 Climate, an abundance of fresh water, and land to grow food has long made Ohrid an attractive place to live and work.

In the southwest corner of Macedonia – one of the six countries carved out of the former Yugoslavia – is Lake Ohrid, a glistening body of water that has been home and haven for people for thousands of years. The freshwater lake is more than three million years old, with a surface area of approximately 150 square miles, and a depth of more than 980 feet, making it one of Europe’s deepest lakes. And like they have for thousands of years, fisherman still ply the lake for food and the lake’s clear waters are a popular tourist draw. 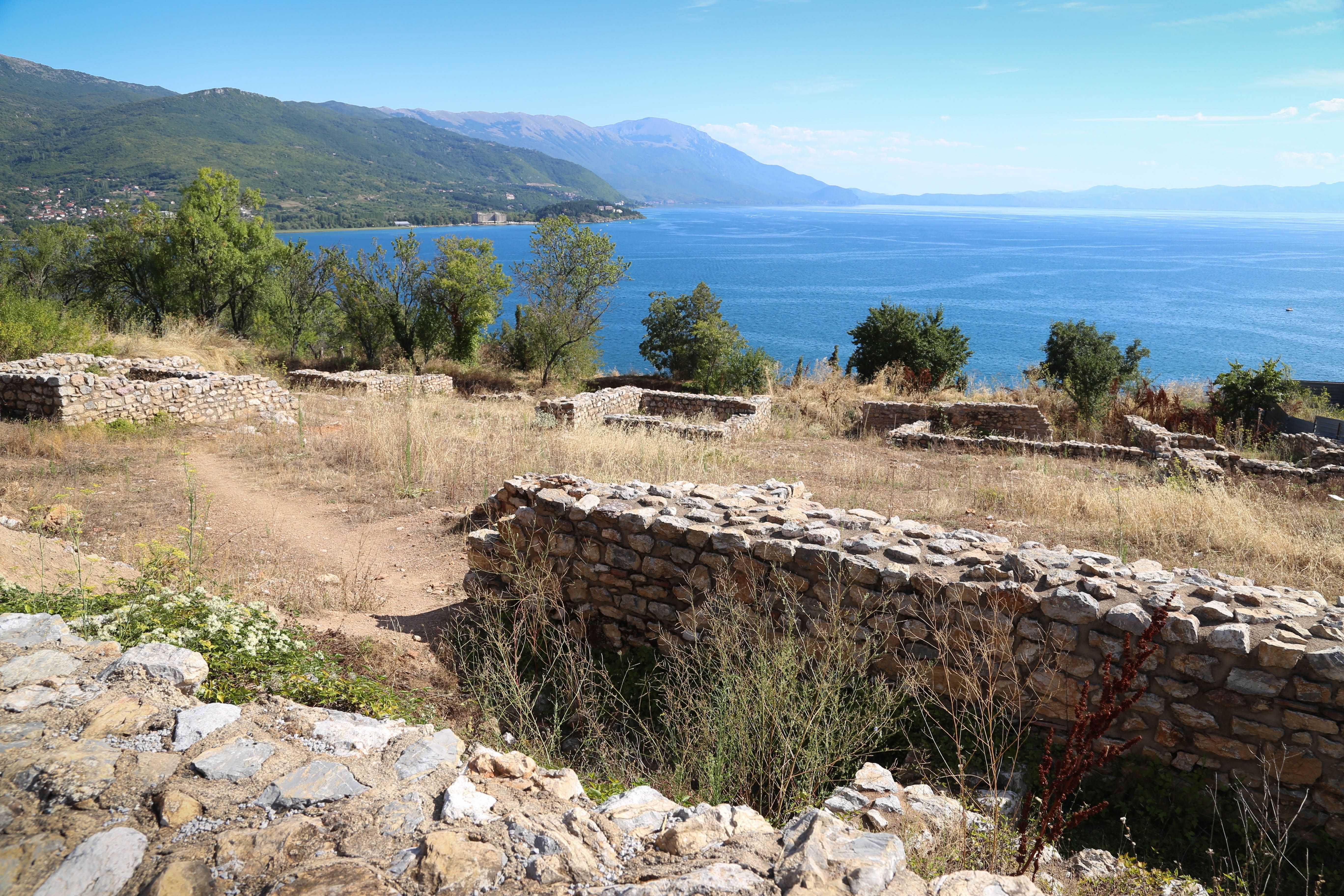 Lake Ohrid is immense, one of the deepest in Europe, and yields bounty from her waters and gives people a place to relax and recharge. The stone ruins in the foreground are clear evidence of the location’s enduring popularity.

During its history Ohrid would, like many ancient towns in a prime location, see various civilizations come and go. After the ancient Greeks, came Romans. Subsequent occupiers and claimants would include Bulgarians, Byzantines, Ottomans, Moldavians, Serbians, Albanians, Venetians, and even Dalmatians from what is now Croatia. 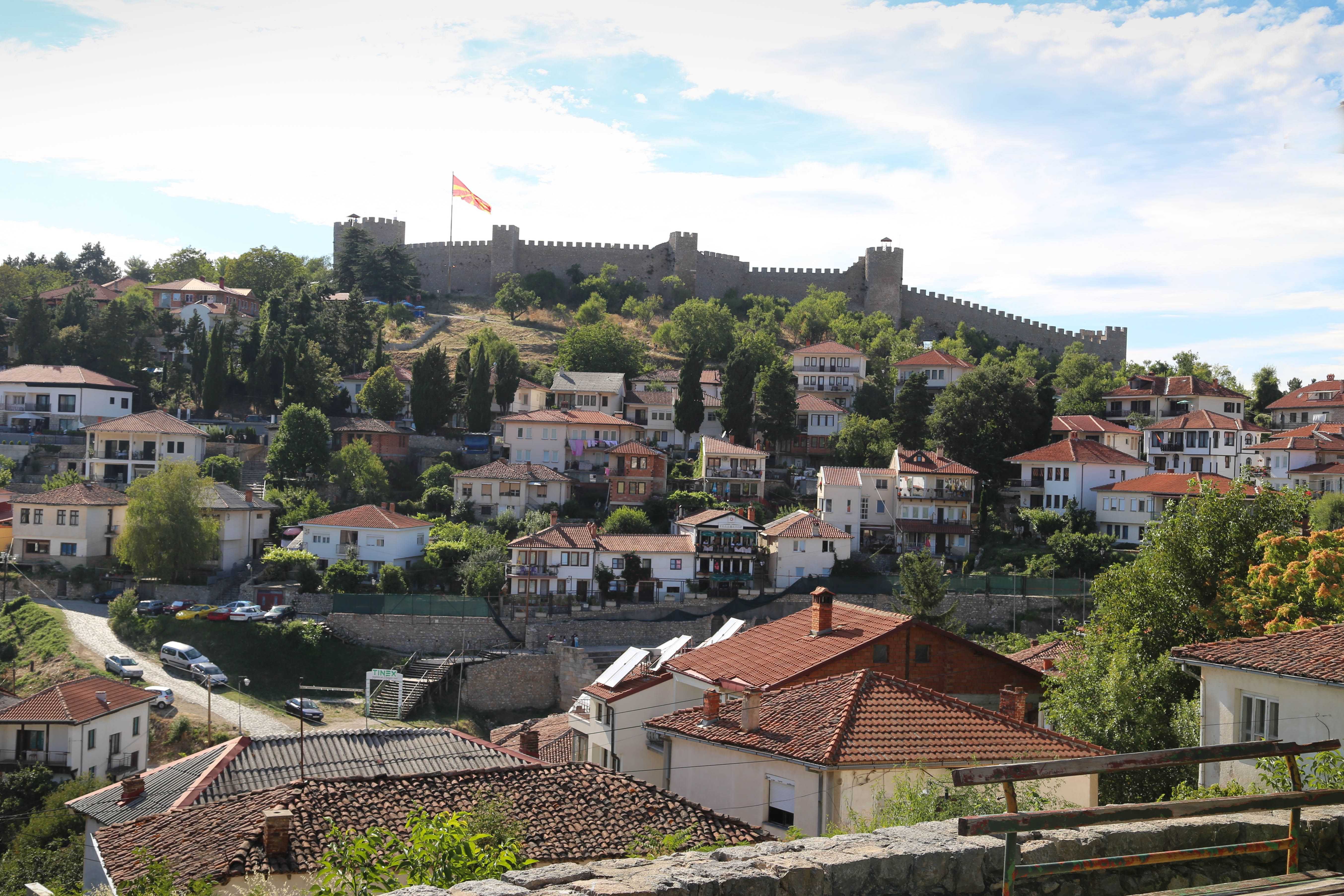 Samuel’s Fortress on the crest of the hill has been protecting the town and people of Ohrid since about the 4th Century B.C. It is named after Tsar Samuel of Bulgaria, who ruled in the 10th Century A.D. 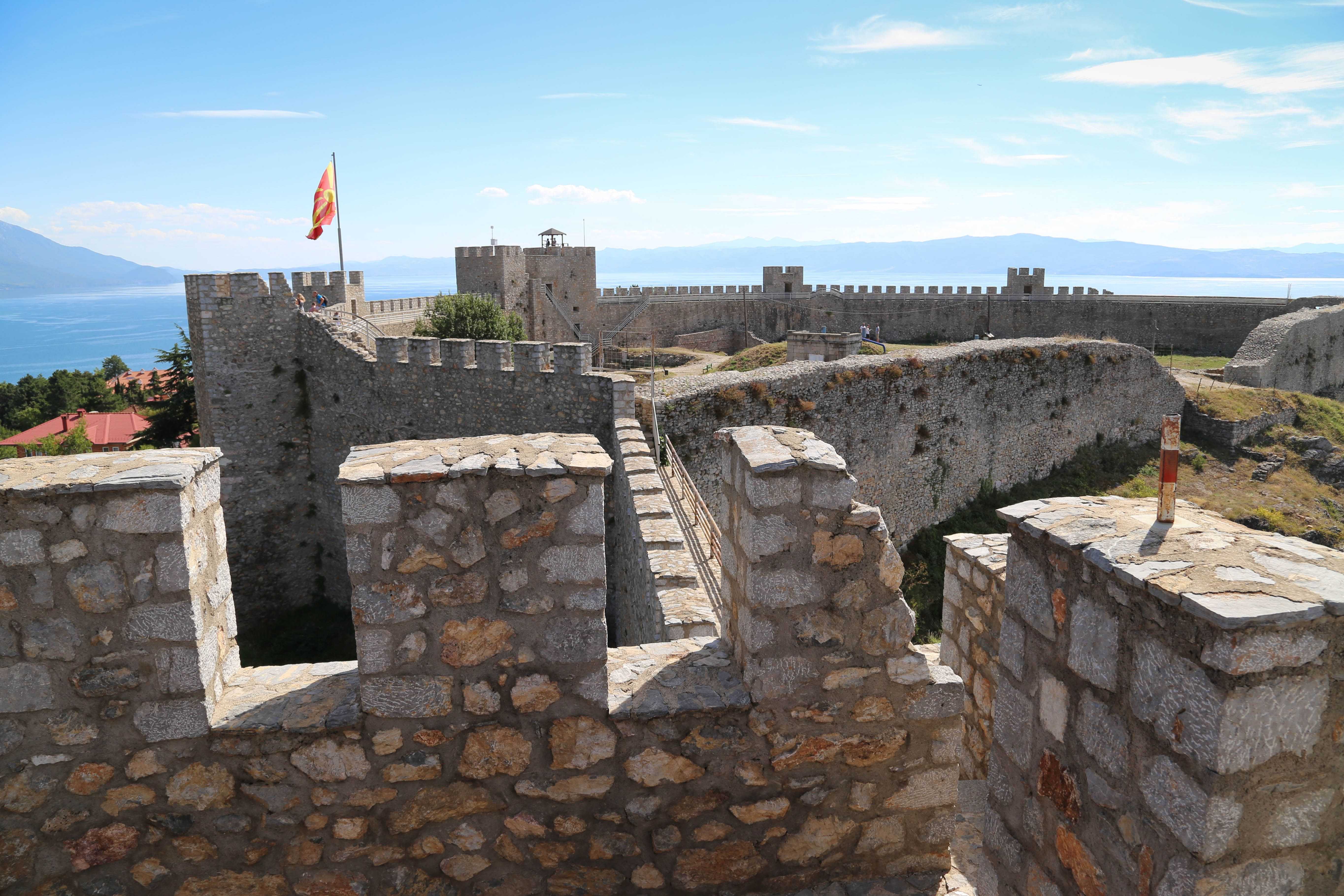 During the long history of Ohrid, there have been a number of civilizations and nations that have laid claim to the area. 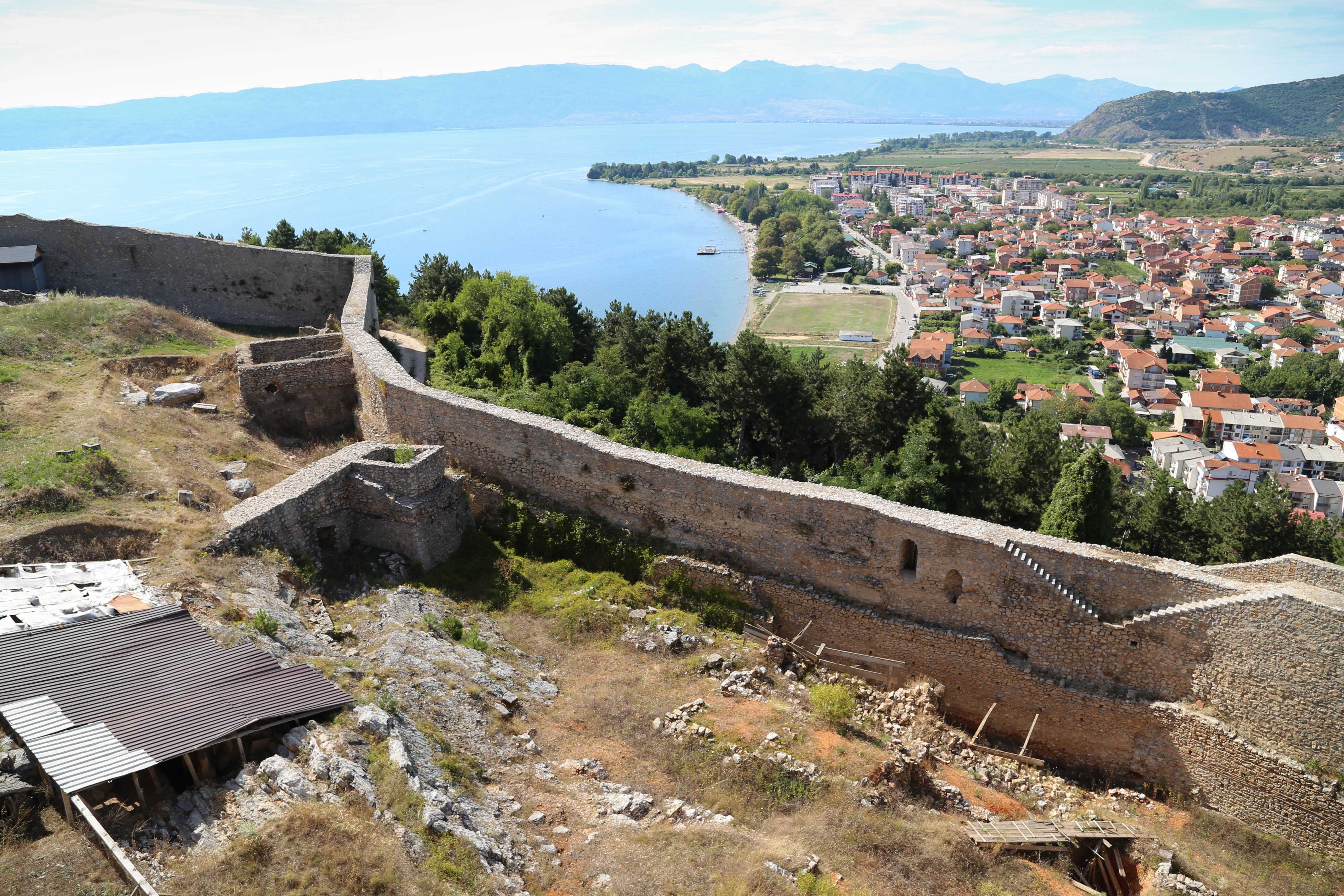 In addition to rebuilding the fortress walls, preservationists are restoring elements below ground, where supplies and weapons were stored.

The climate and abundance of life of Lake Ohrid makes it a reliable source of food for the people who have lived there since 359 BC. Researchers estimate more than 1,200 endemic species – both flora and fauna – live in and around the lake, making it one of the most biodiverse lakes in the world. Another important indicator of the region’s importance is it is one of only 28 places on earth where UNESCO World Heritage has recognized as both Cultural (the historical center of the city in 1979) and Natural (the lake in 1980). Part of Albanian border runs through the southwest portion of the lake. 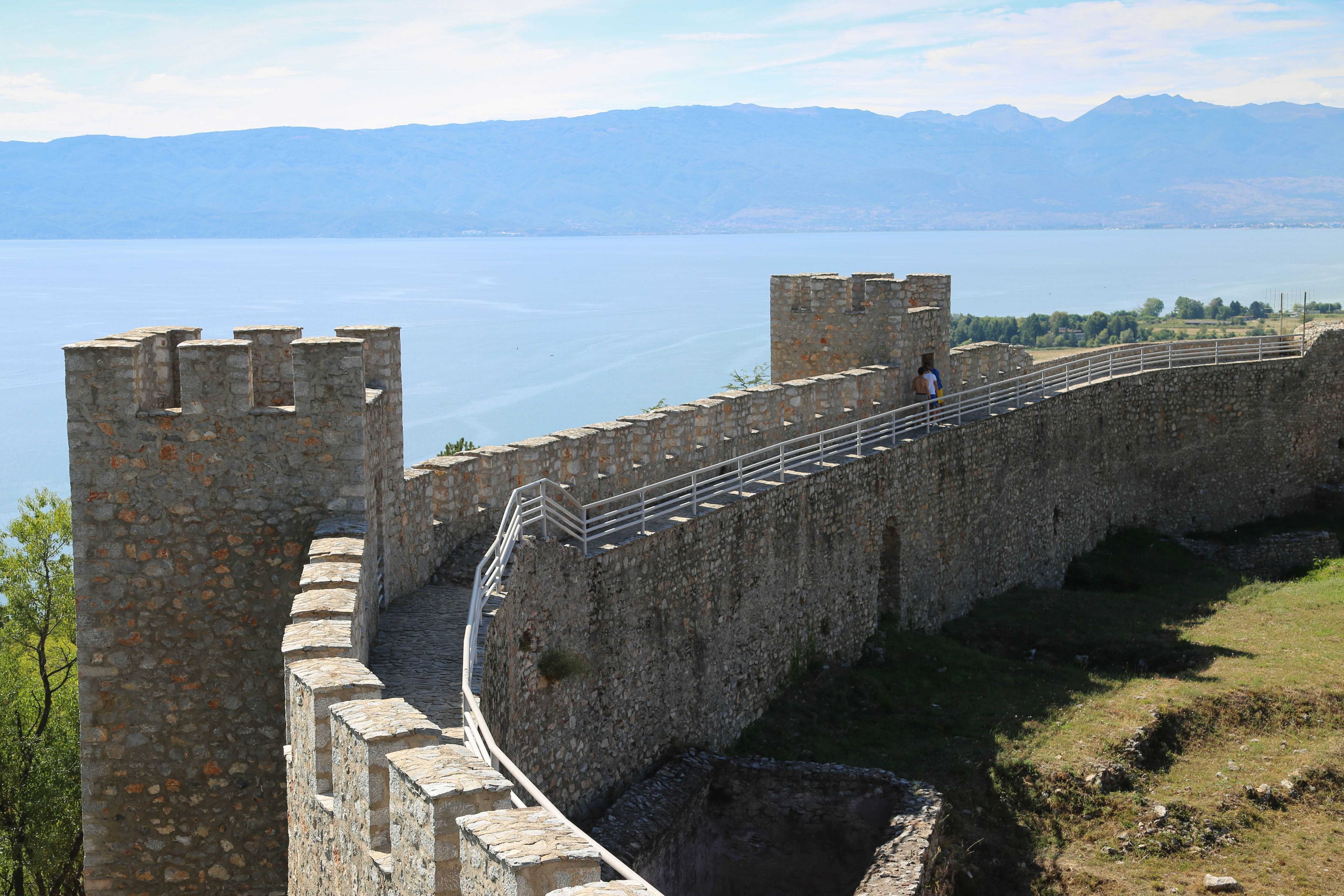 Ohrid’s importance to world culture and heritage site is evidenced by the fact it is one of the few places UNESCO has deemed it both a Culture and Natural heritage site. 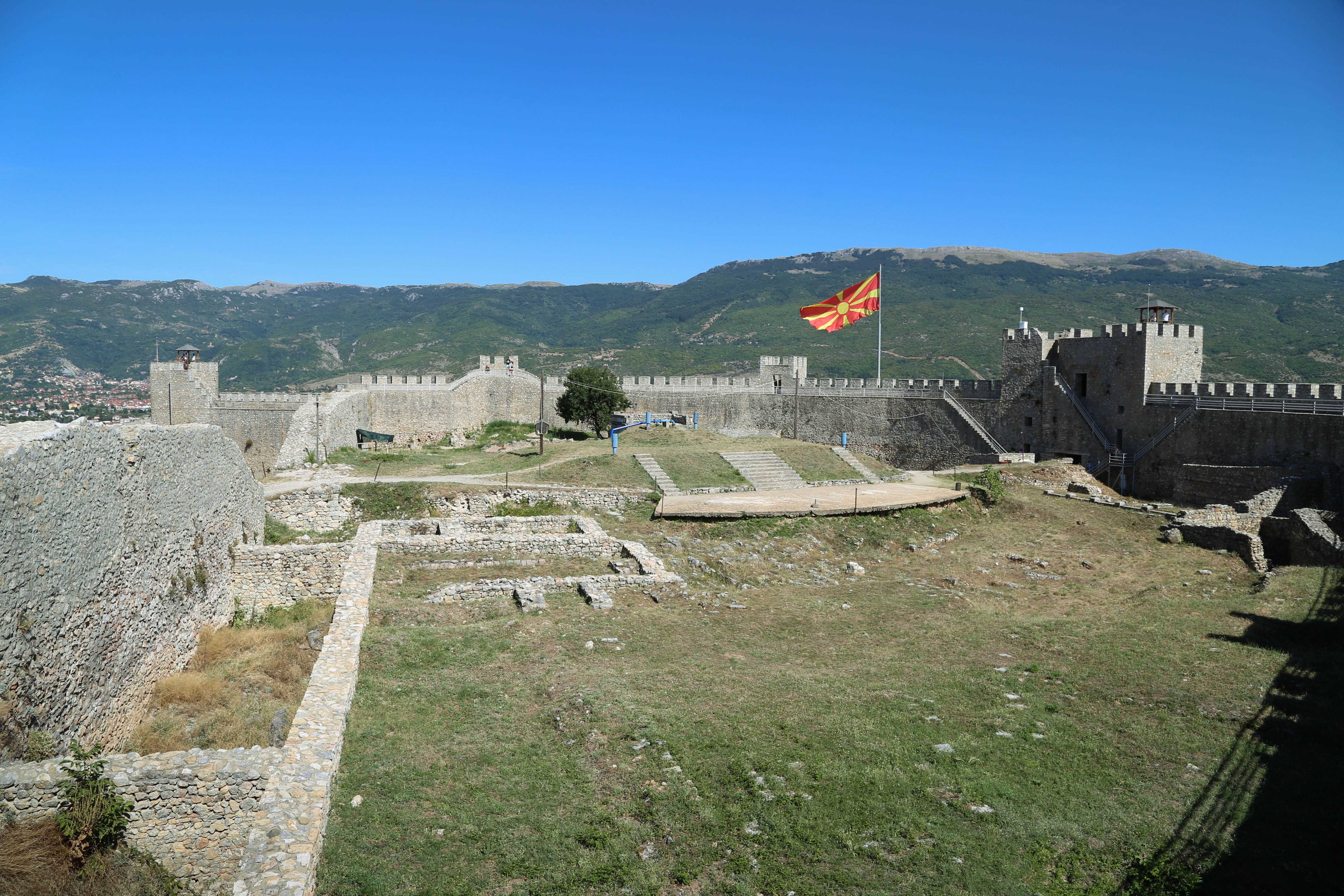 The bright red and gold flag of Macedonia flutters in the breeze at Samuel’s Fortress in Ohrid. 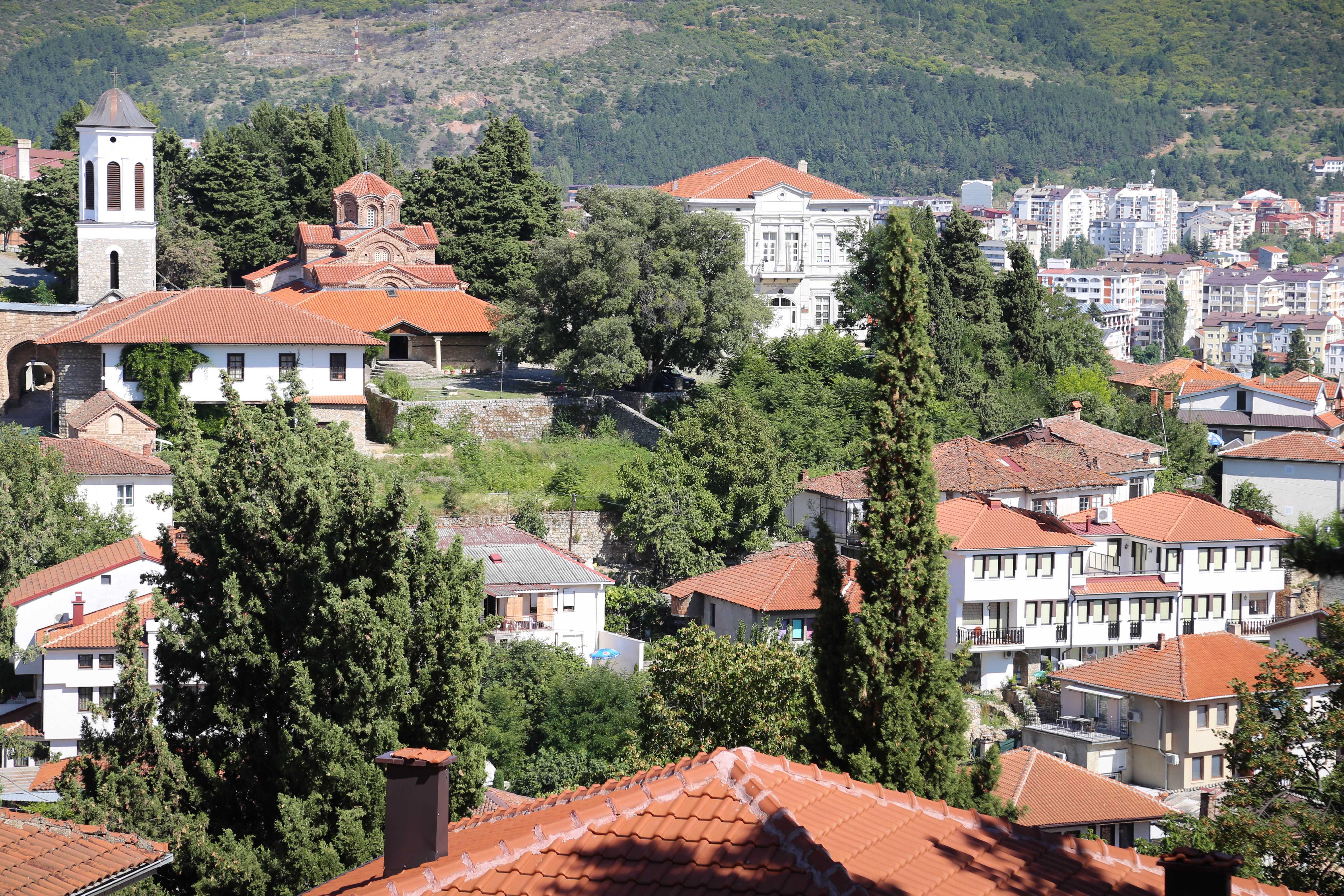 In addition to being a wonderful place to live, Ohrid is a highly popular destination for visitors and tourists and there are many festivals and events that are held throughout the year.

The lake offers a number of water-related activities for visitors. There are beaches for relaxing in the sun, boating and sailing activities, and swimming in the clear waters. In the latter part of July each year, elite marathon swimmers from around the world gather for the Lake Ohrid Swimming Marathon, where they swim more than 18.5 miles from the monastery of St. Naum, along the shoreline to the town harbor. Due to its location and elevation the area has a Mediterranean climate; average monthly temperatures range from the mid-30s Fahrenheit in the winter months, and the low 80s Fahrenheit in the hottest part of the year, August. Average annual rainfall does not usually exceed 30 inches, with fall, winter, and spring being the rainy months. 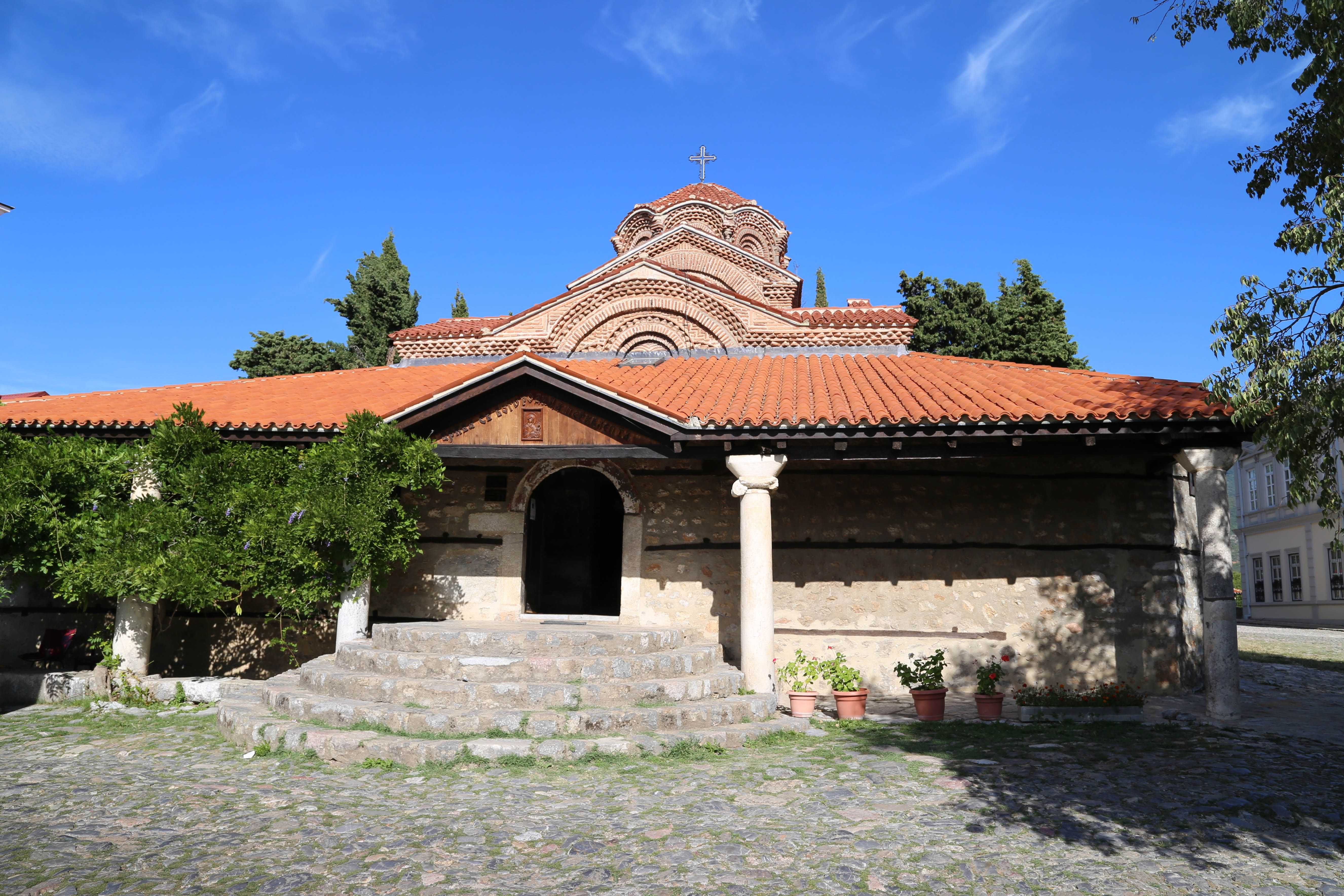 St Bogorodica Perivleptos has served as the cathedral of the archbishop and has been used to house many relics important to the Orthodox faith as far back as the 16th Century A.D.

The city of Ohrid is situated on the northeast corner of the lake and today has approximately 42,000 residents. The original town was constructed on a hill that overlooks the lake. Ohrid also has a distinction of once having 365 churches of various faiths, giving the faithful a plethora of choices of where to worship. 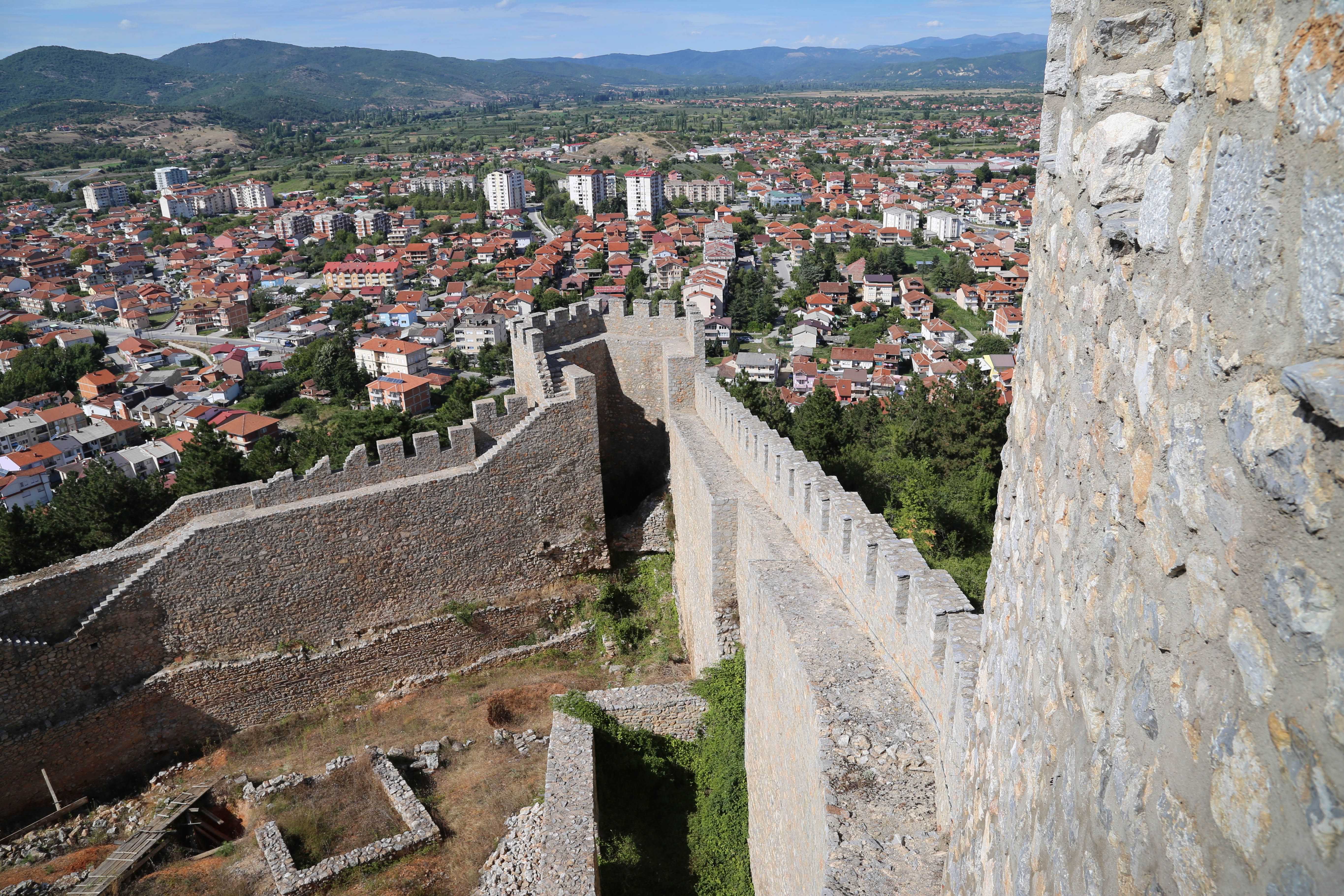 In fact, when settlers first gathered in the area, the town was referred to as Lychnis, which roughly translates from ancient Greek as “a precious stone that emits light” or “city of light” (the Latin name used by the Romans was Lychnidus and essentially means the same thing). It was not until around 879 AD when the settled area become known as Ohrid, likely a mashup of Slavic words “vo hrid” which means “on the hill,” a strategic rise next to the lake where the town had settled. 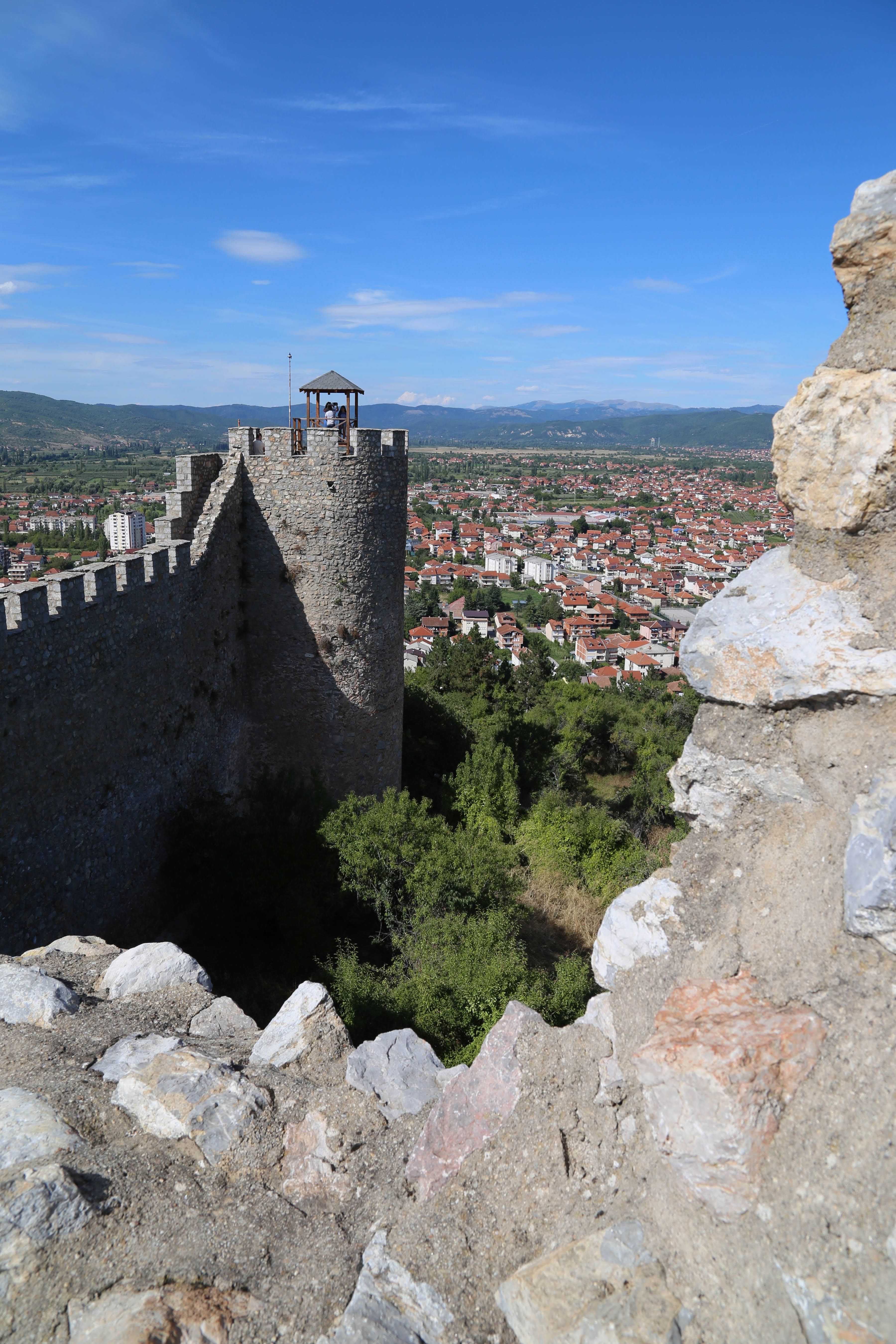 A bit of old wall in the foreground, and some of the newly restored elements such as walls, battlements and this turret of Samuel’s Fortress are drawing visitors to Ohrid and this area of Macedonia.

With so many churches having been built in Ohrid, at one time or another, there are many beautiful ones to appreciate during a visit to the city. Some of the major churches include St. Sophia church built in 1035 AD, St. Bogorodica Perivlepta which was built in 1295, St. John the Theologian – Kaneo was constructed in the 13th Century (and is popular because of its location on the crest of the hill above the lake), and St. Pantelemjon – Plaoshnik which was erected in the 10th Century. Additionally, there are many other old and well-preserved churches for visitors to enjoy. Ohrid also has an Old Bazaar, fortress walls, an icon gallery, and traditional architecture to showcase the city’s long and storied history. 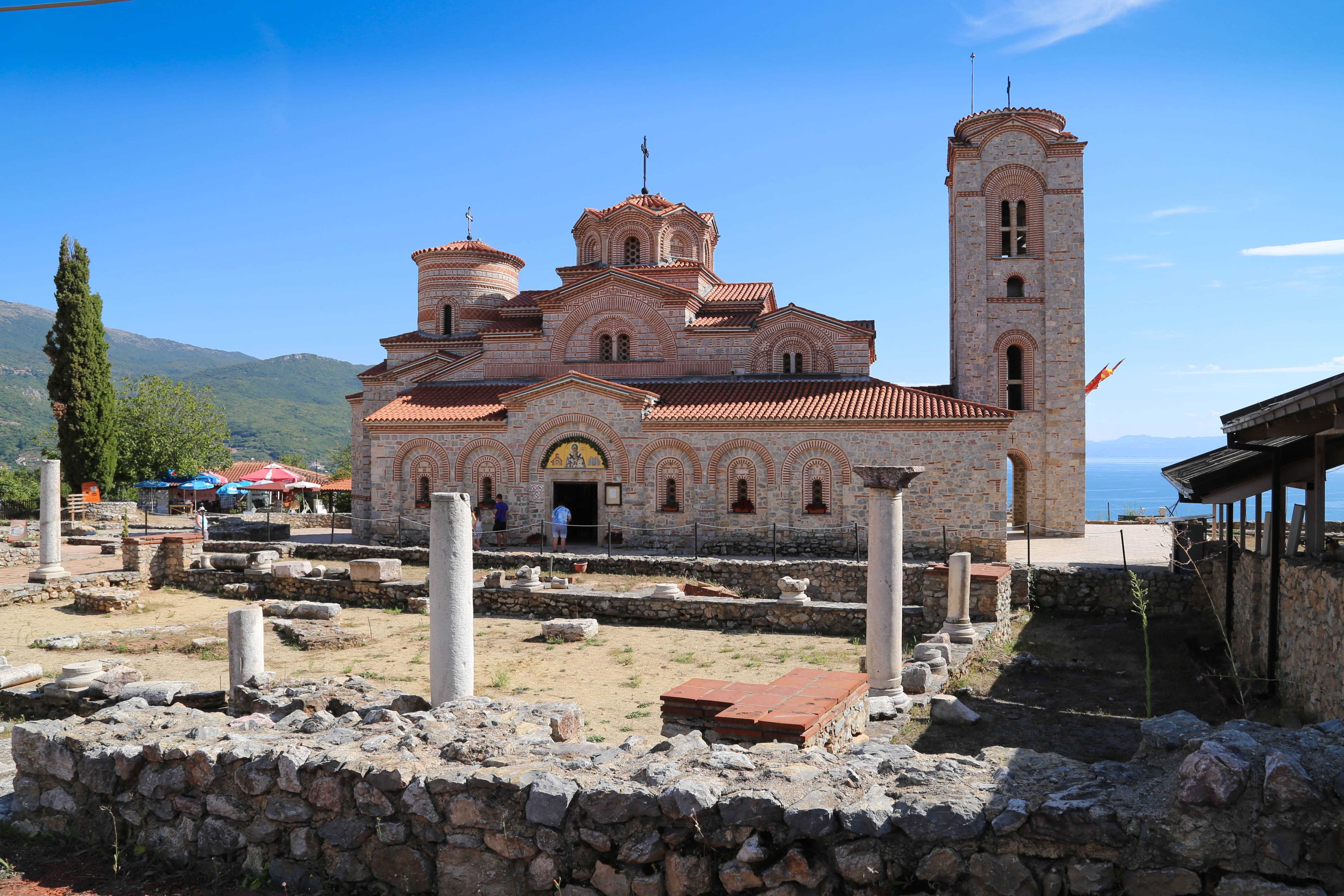 St. Clement’s Monastery is located on the archeological site of Plaosnik. The church was only completed in 2002. 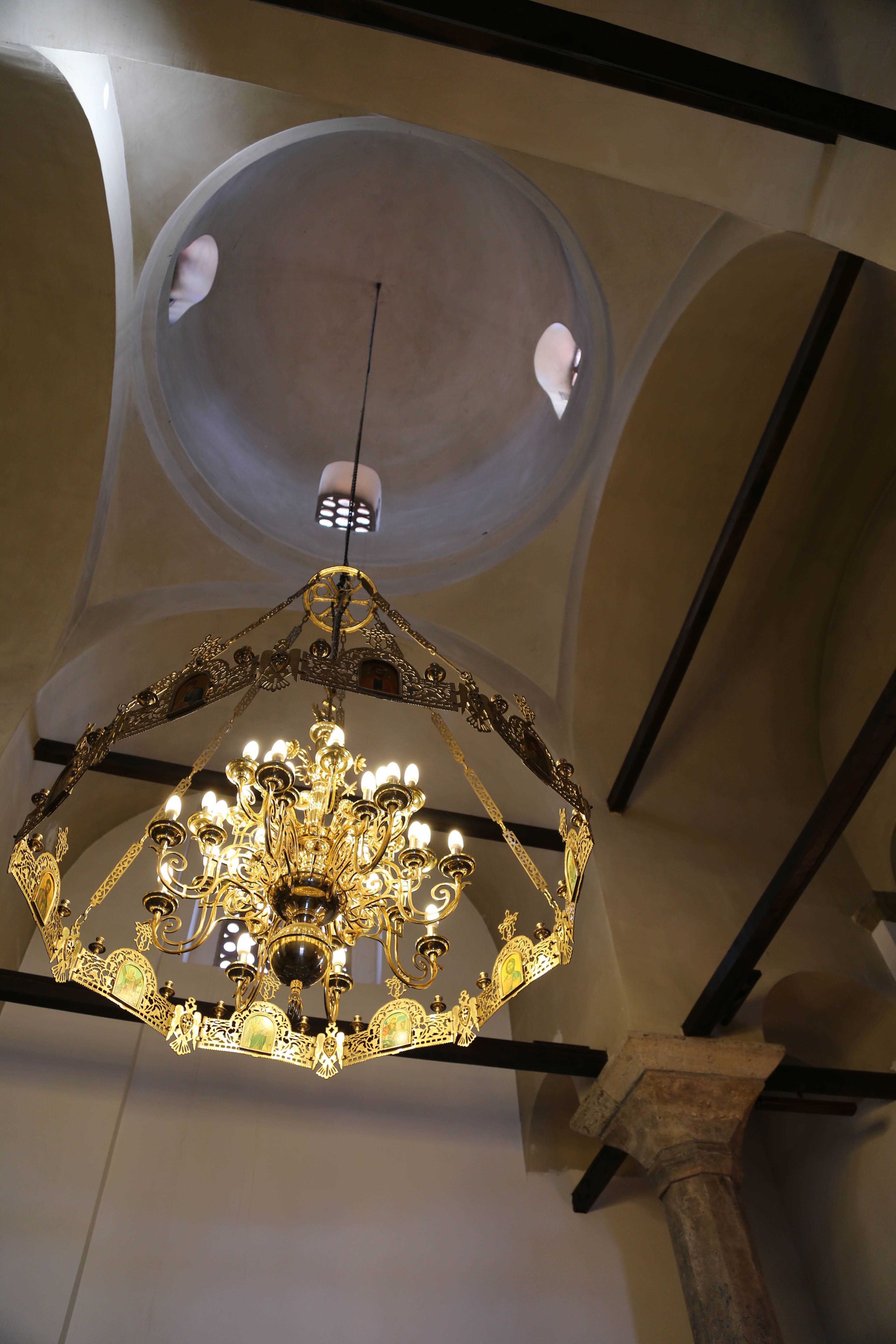 A chandelier hangs from the ceiling at St. Clement’s Monastery. 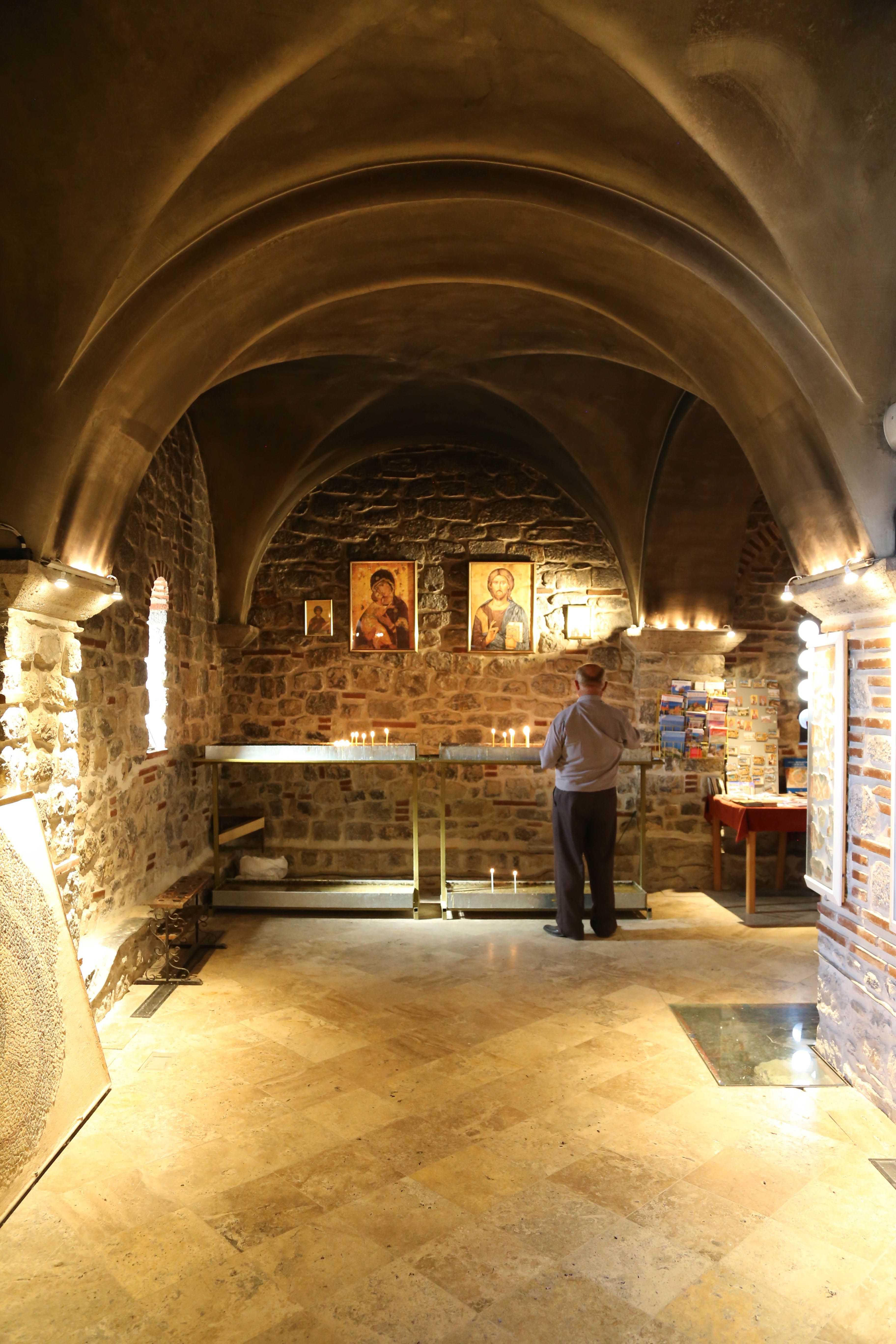 Inside St. Clement’s is an area where people can light candles for those they love. By tradition, candles lit on the lower level near the floor are meant for those who have died but are still remembered. The higher level is for candles for the living. 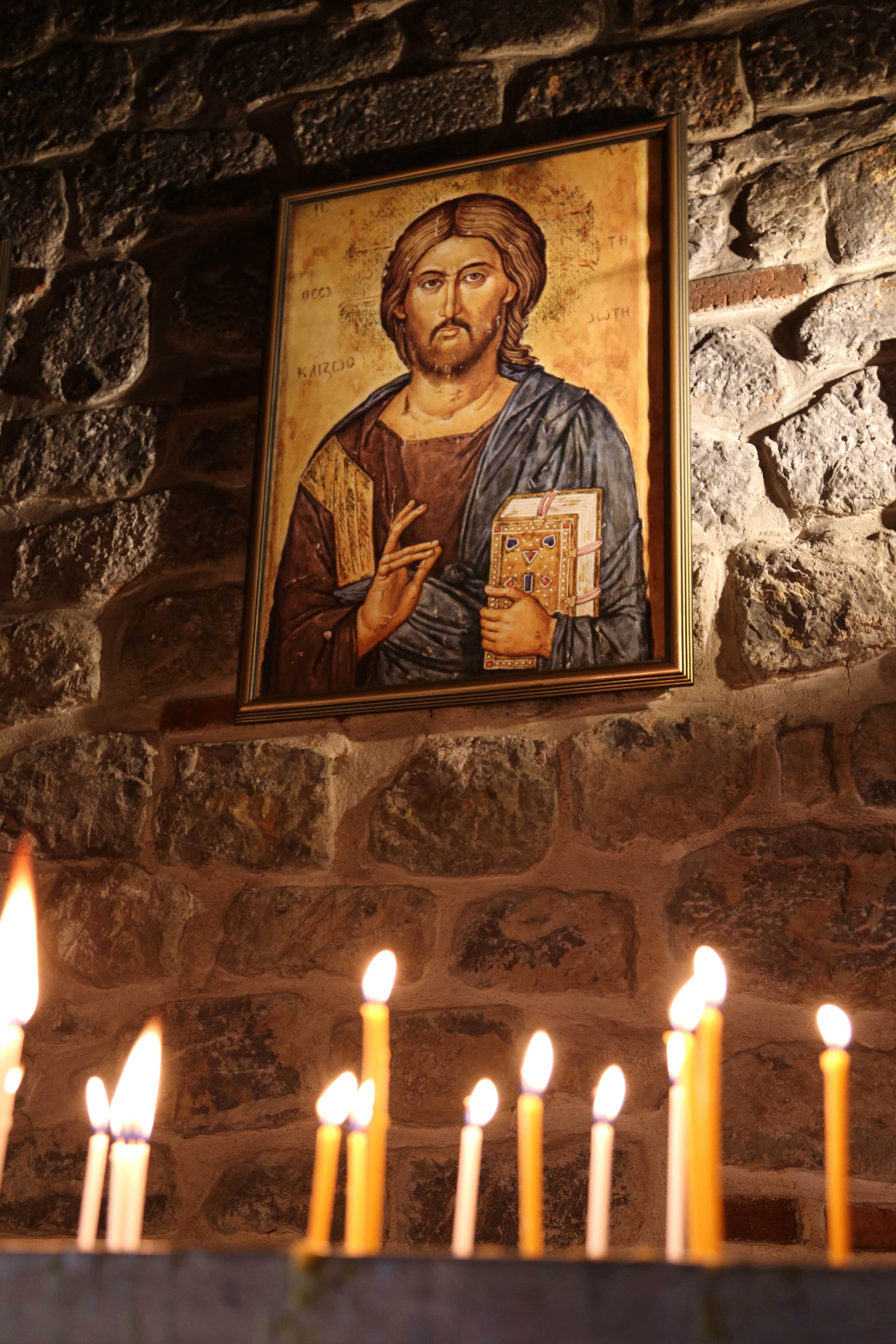 An icon keeps careful watch over the candles that have been lit by visitors and the faithful to honor the living and the dead.

And the city has a number of other popular attractions to entice visitors. Ohrid trout is a popular dish at many of the restaurants in the city. For five weeks, from July stretching into August the Ohrid Summer Festival has earned a reputation as one of the leading music festivals in Europe, where marquee-name musicians entertain the crowds. And also, during the summer the Balkan Folkfest shows off the best of traditional folk life, music, and culture of the regions. 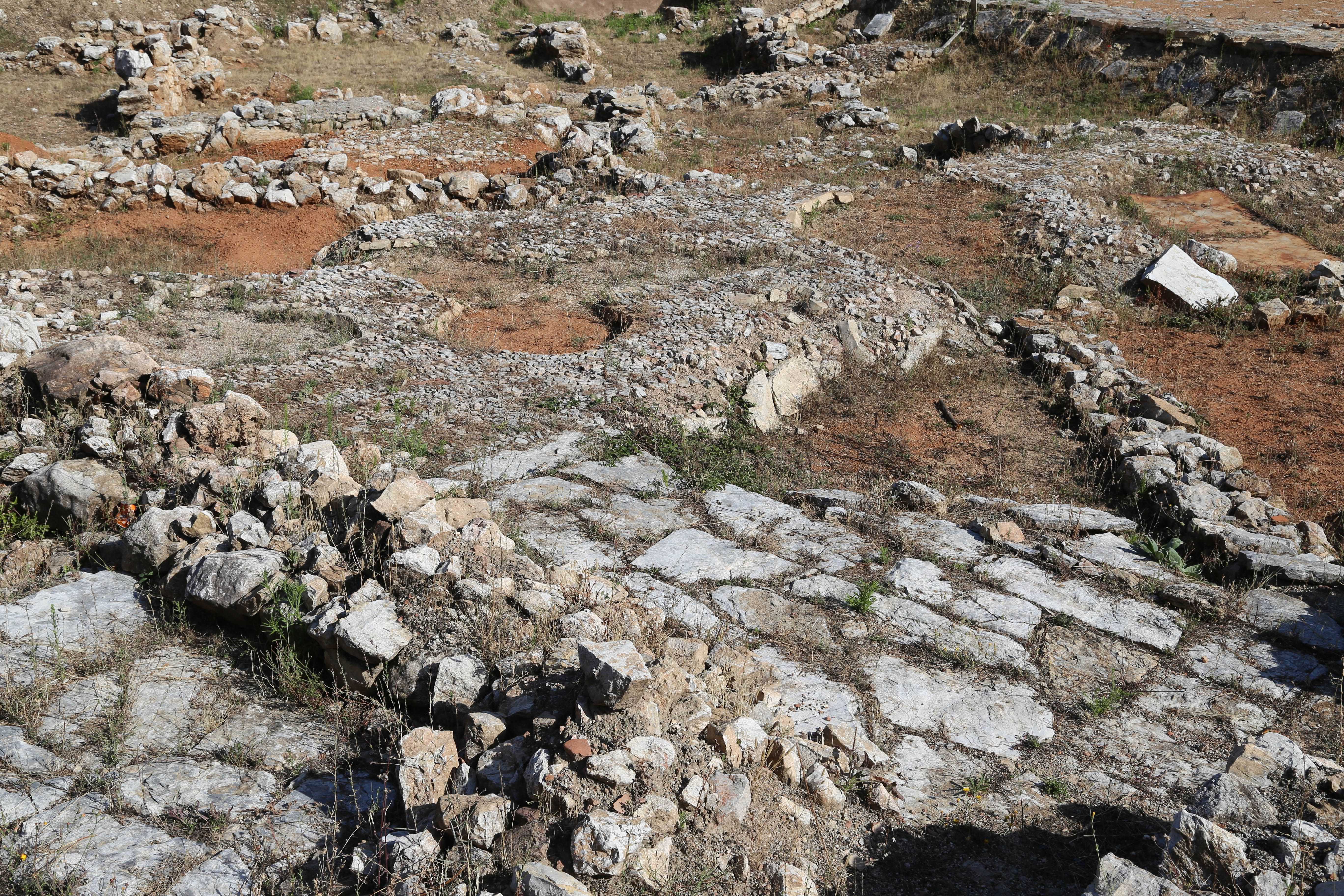 To an untrained eye this spot might not be given a second thought. But to an archeologist, a treasure trove of information and history lies here, only waiting to be discovered. 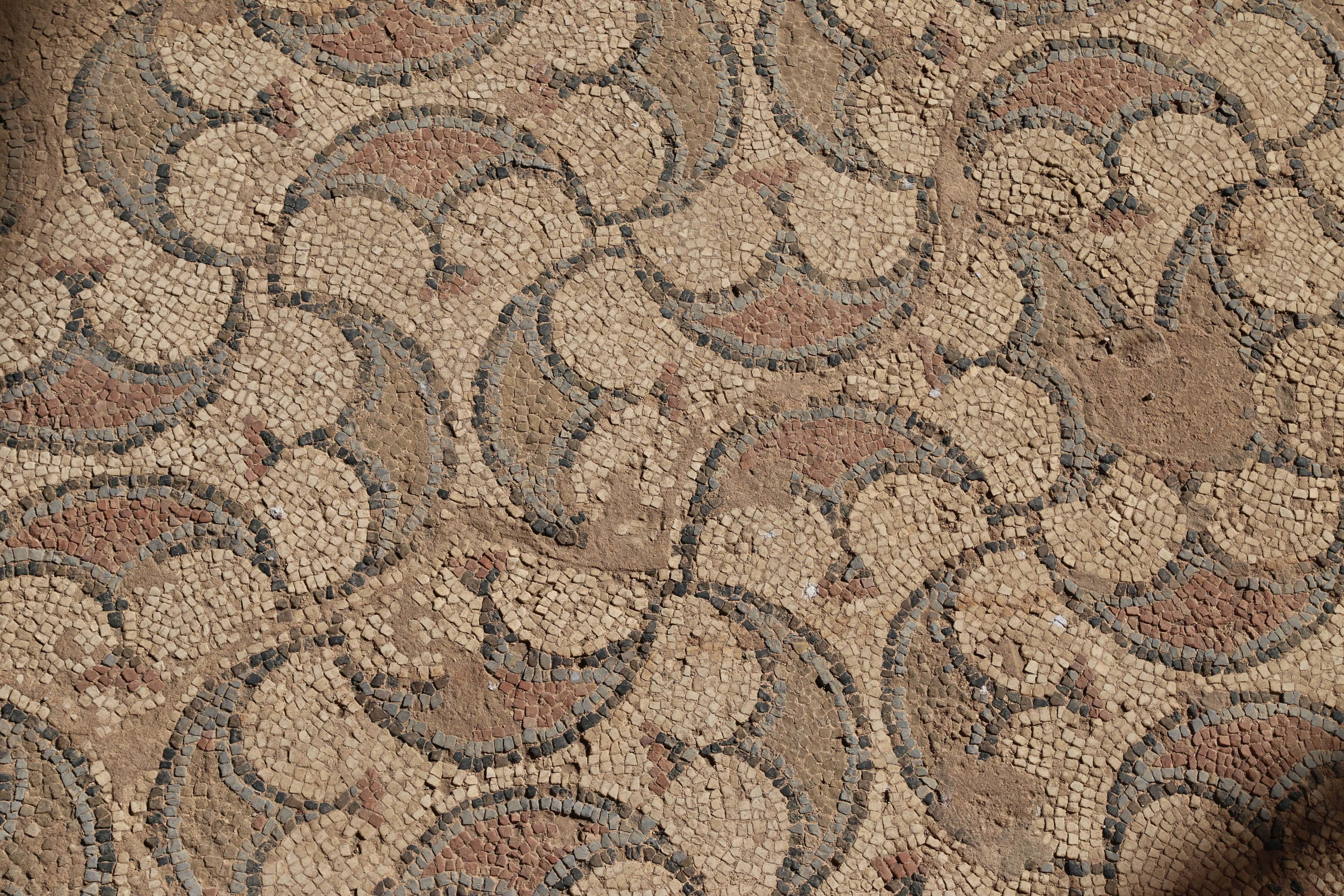 Just one of the many historical treasures that have been unearthed by archeologists is this intricate mosaic floor, each tile placed by hand many centuries ago.

The story of Ohrid is one of an ancient place and proud culture. The region around Lake Ohrid is a place of beauty for a country that is coming into its own. 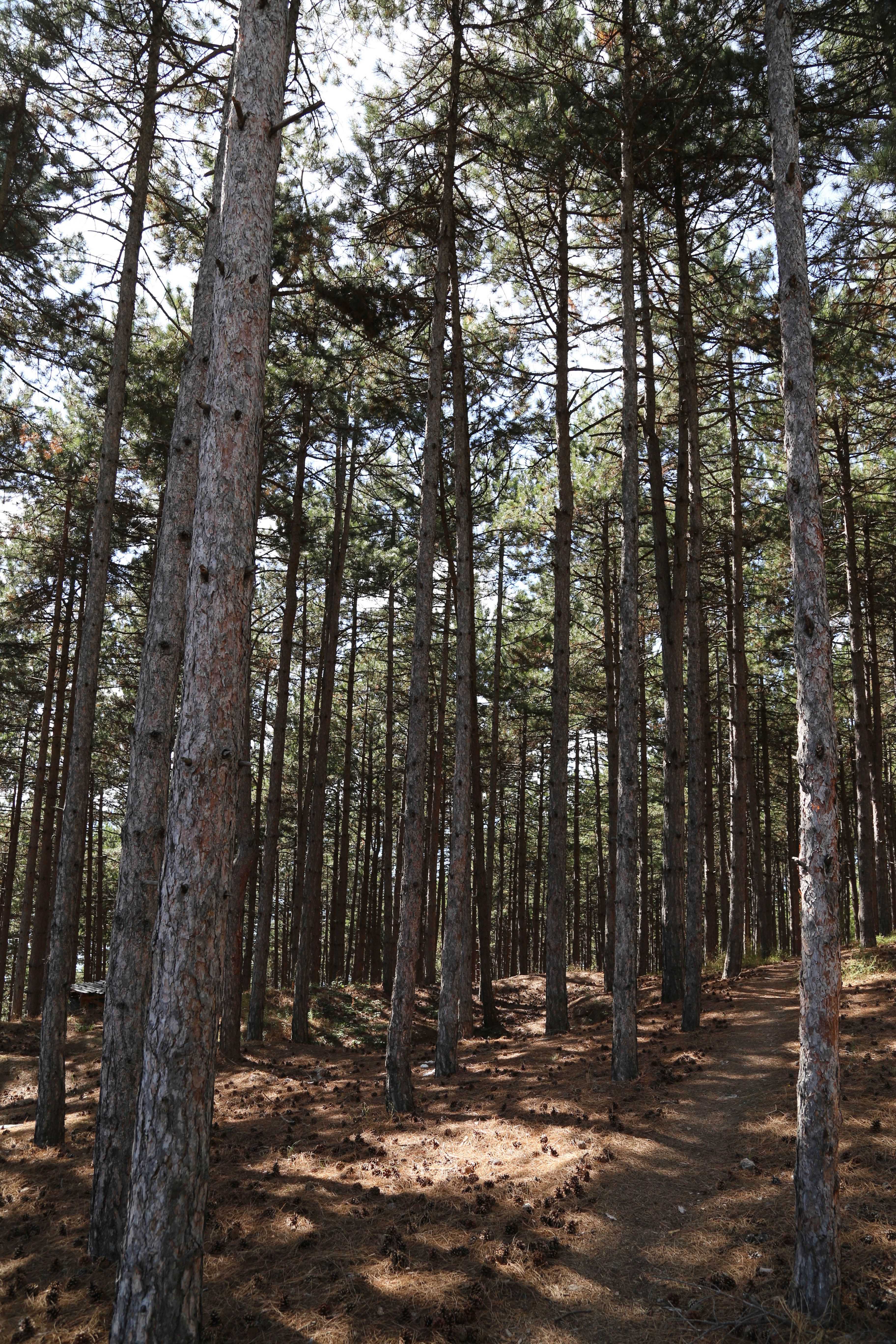 For thousands of years pine forests in the area provided wood for buildings and fuel for fireplaces and ovens.

For more information about Ohrid and Lake Ohrid, click over to these websites: