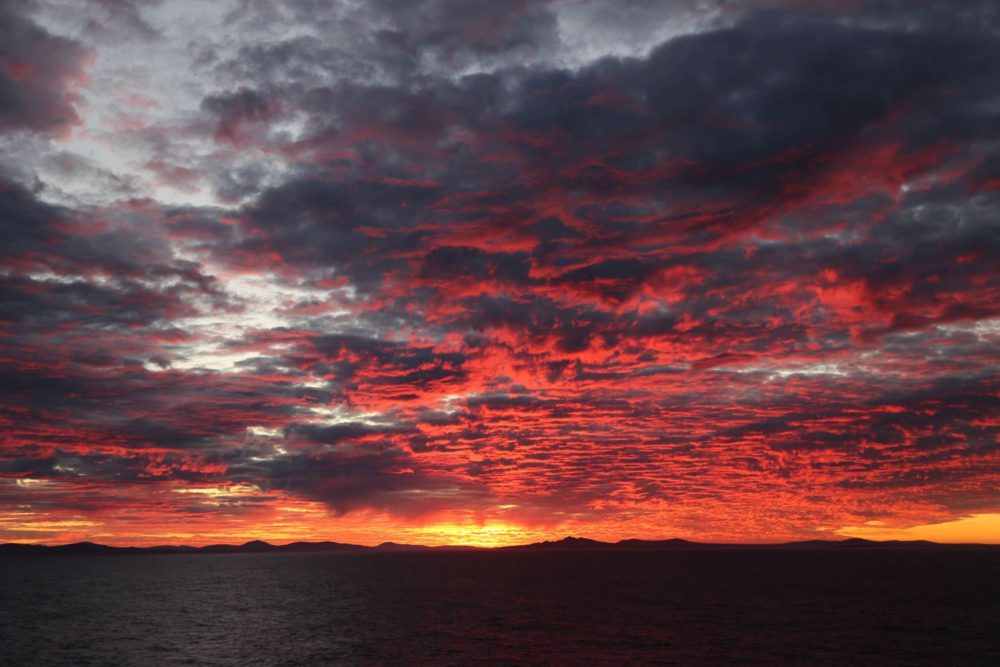 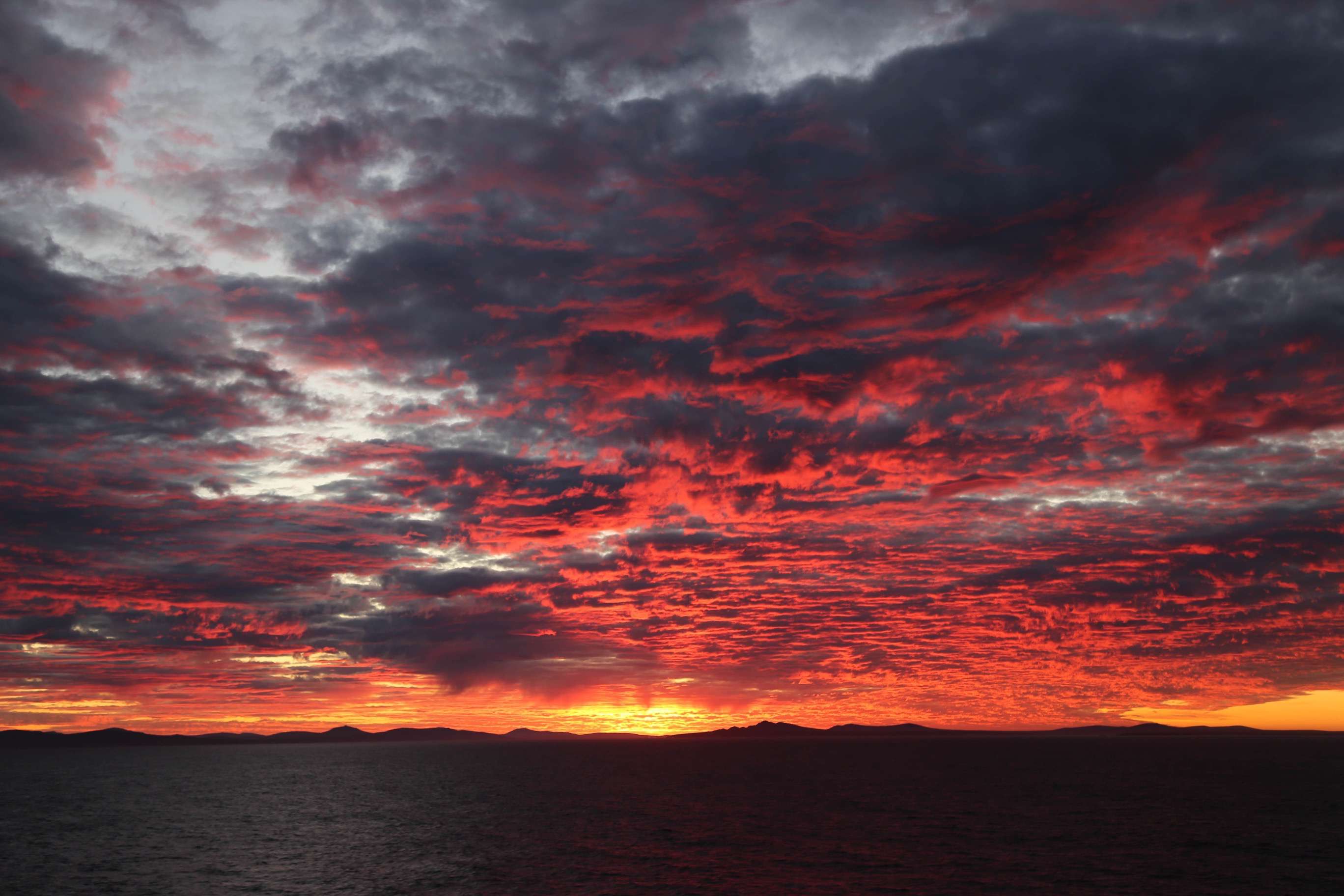 A fire-red sunset blankets the sky over the South Atlantic Ocean with the Falkland Islands in the distance.

Call them what you will – Falkland Islands or Islas Malvinas – these tiny windswept specks of land situated in the South Atlantic Ocean approximately 330 miles off the coast of Argentina might well have been omitted from the annals of modern history had not two nations growled and bared their teeth when they squared off and waged a 10-week war to reconfirm who owns the land. 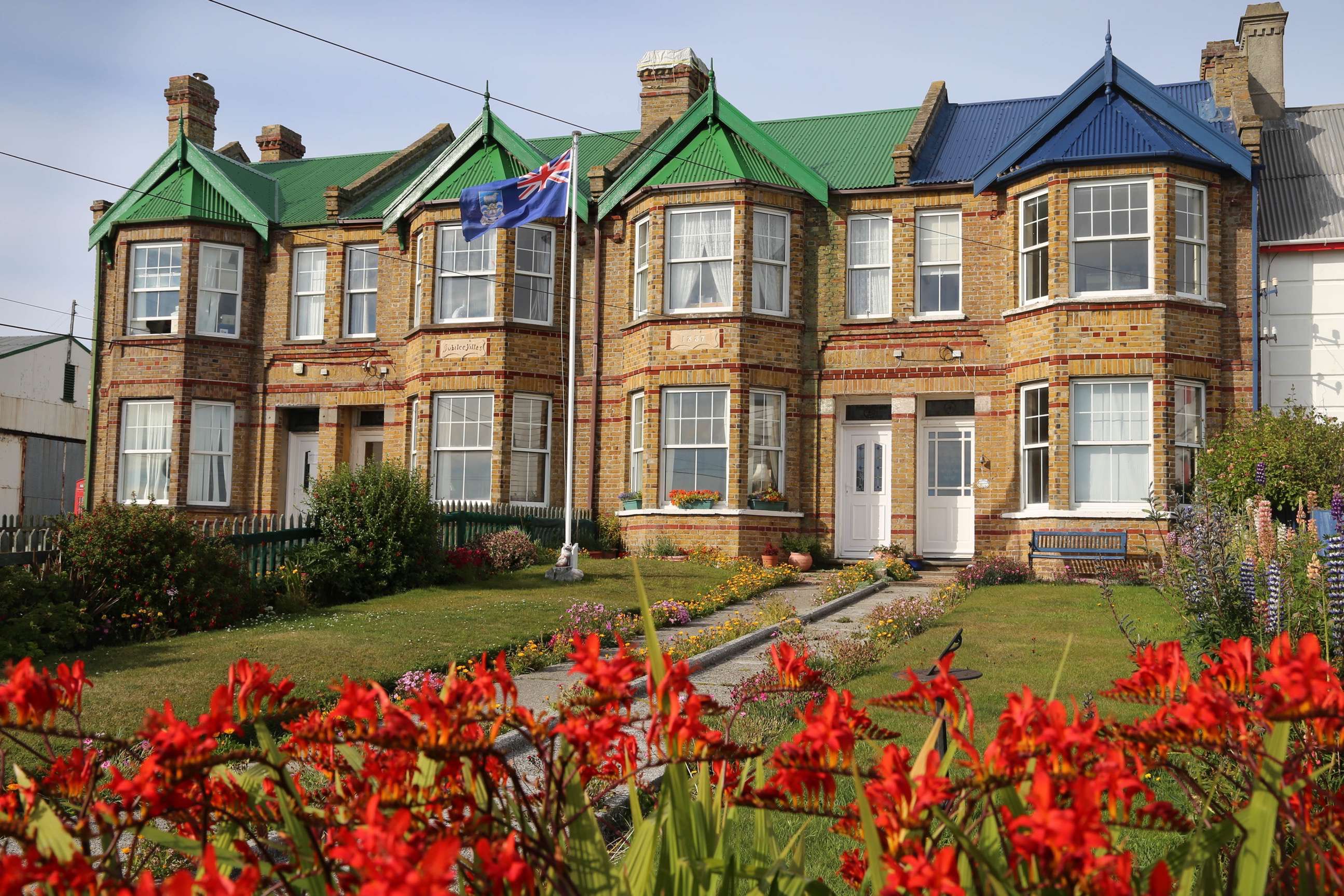 Neatly kept homes and gardens can be found all around the small towns of the Falkland Islands, like these at Port Stanley. 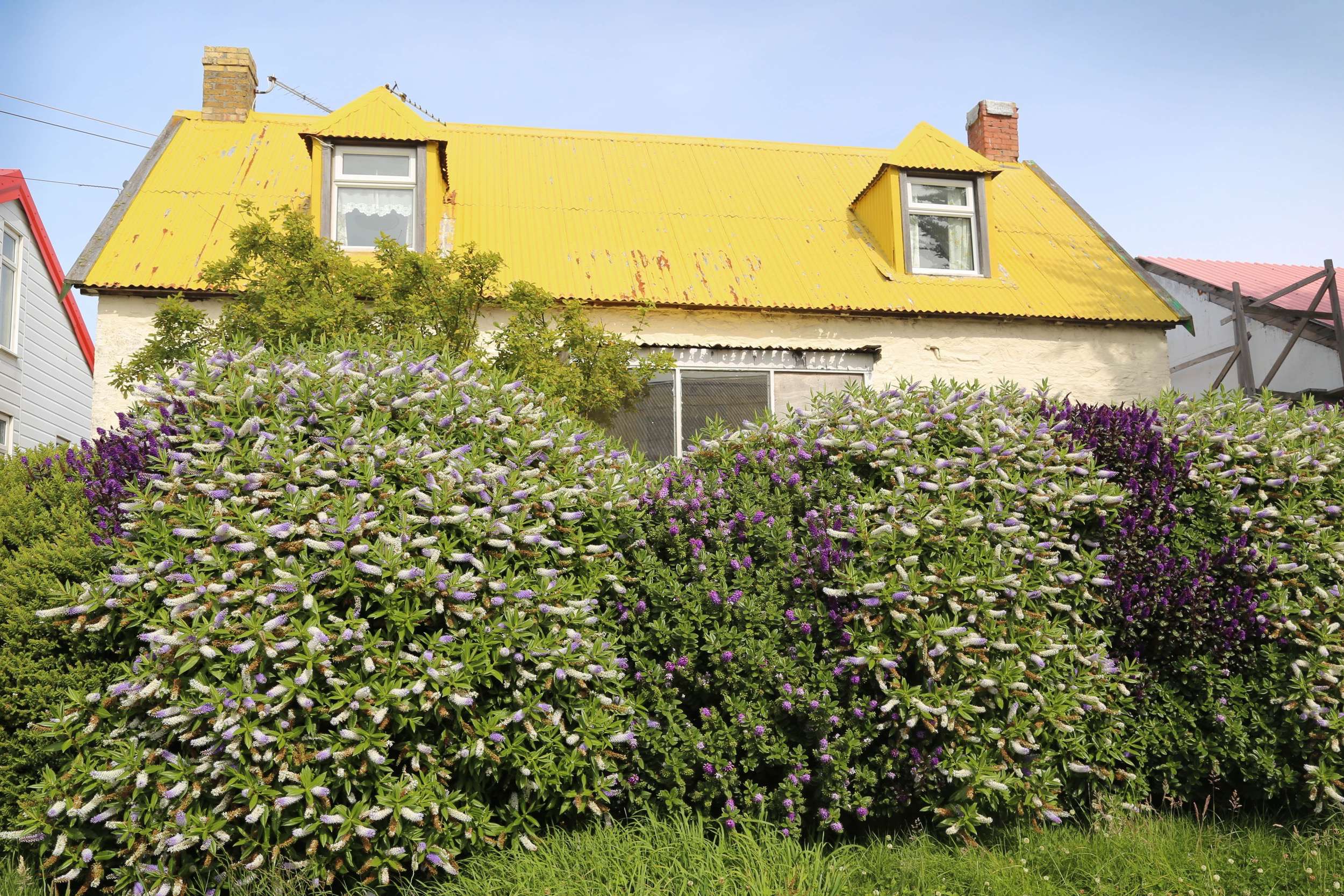 Many of the homes have brightly-colored roofs, as a way to offset the many months of dreary weather.

Europeans first sighted the islands – half the size of the U.S. state of Delaware – in 1592 and over the centuries France, Great Britain, Spain and Argentina claimed ownership. Great Britain took control in 1833, though Argentina still claims the archipelago. And there the matter stood for about 150 years, until the early 1980s – times of trouble for both Great Britain and Argentina. Each country saw advantages to pressing their case – even if it meant war. 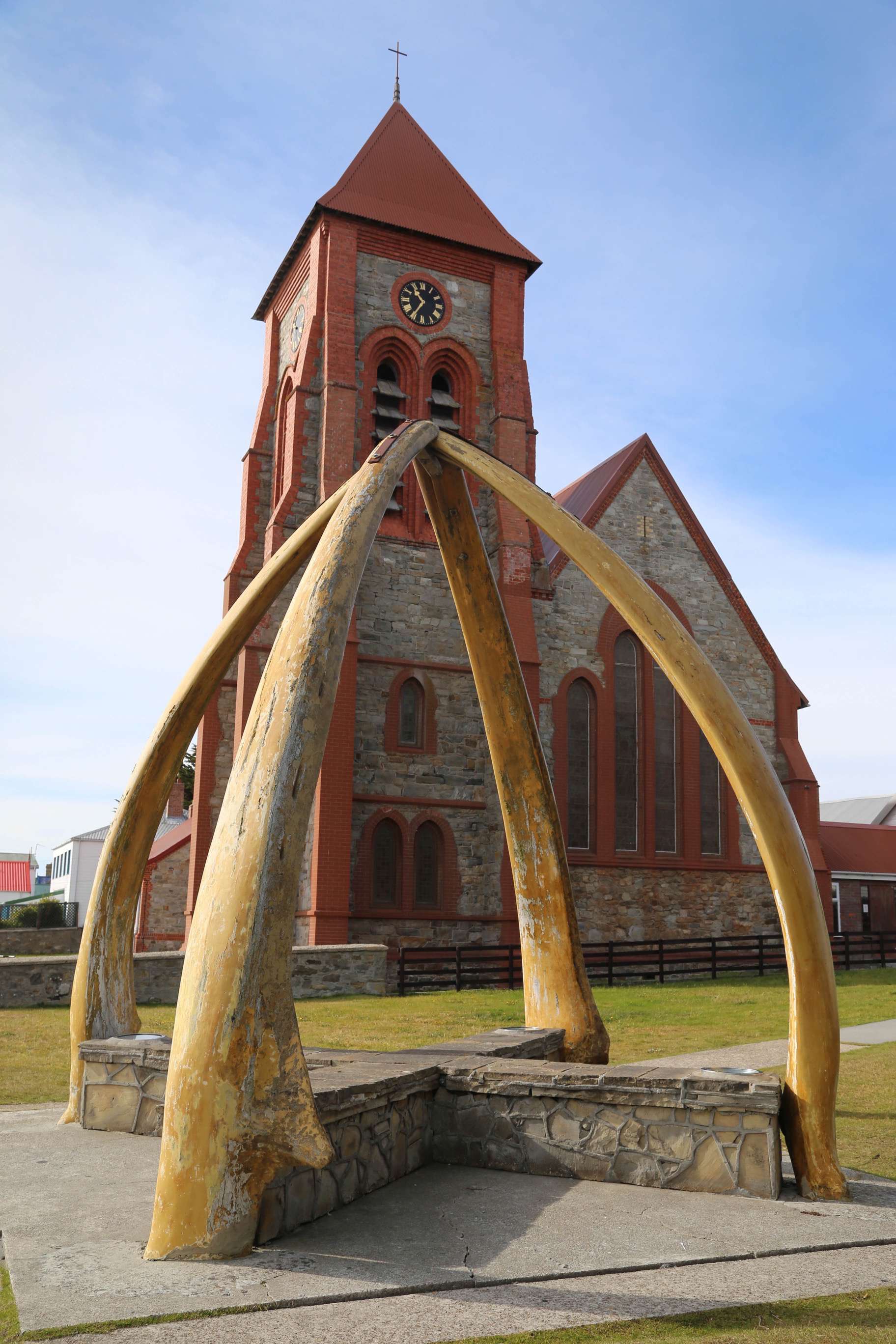 Christ Church Cathedral in Port Stanley is an iconic spot in the Falkland Islands. 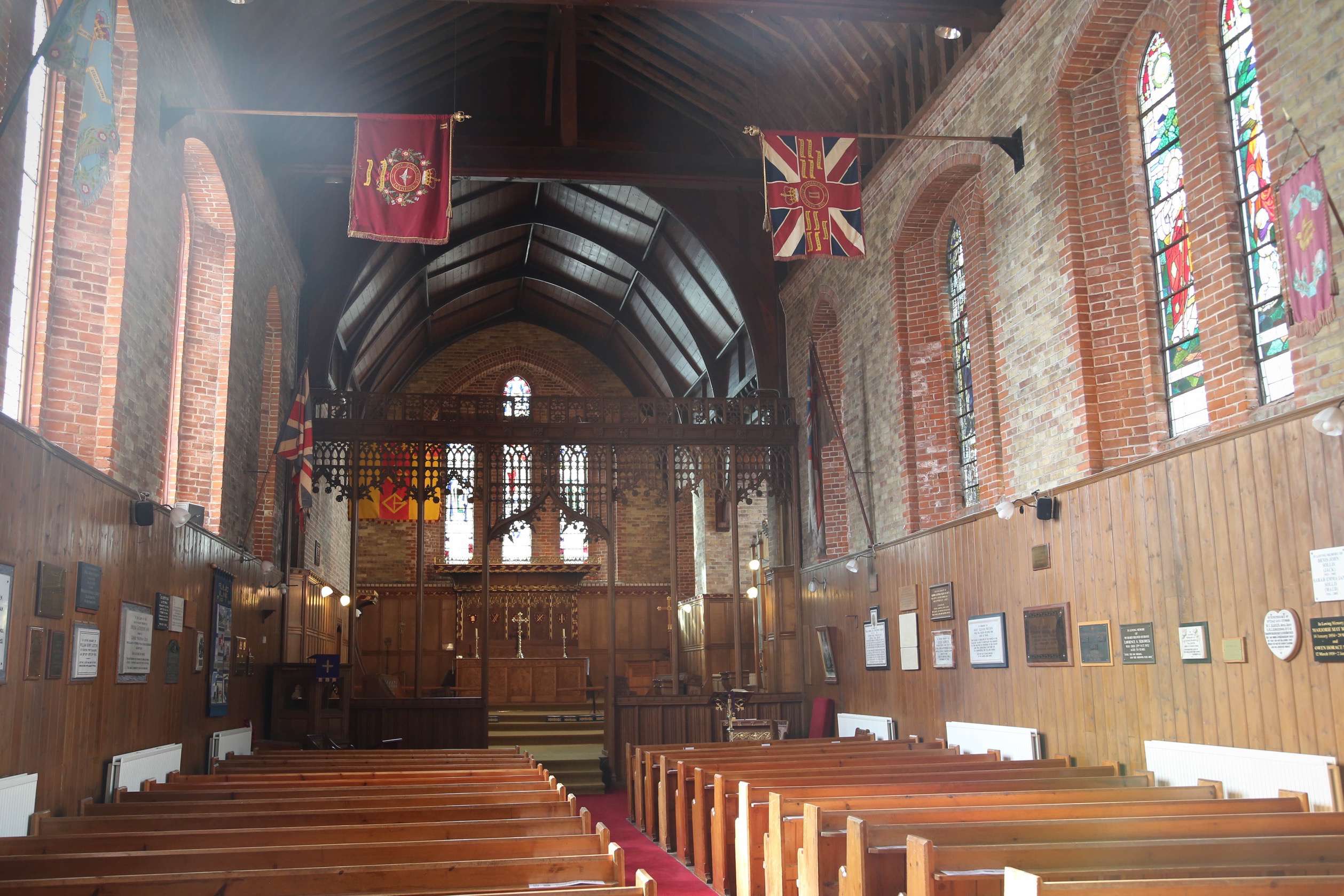 Those who served — and those who gave their full measure of service — are remembered by the flags hanging proudly at Christ Church Cathedral.

At that time, the United Kingdom was clawing its way out of recession and national morale was in poor shape. Argentina also was mired in its own recession and malaise and the military junta ruling the country faced an increasingly angry citizenry. And like so many wars, the spark for conflict came from an unlikely and completely unexpected event. 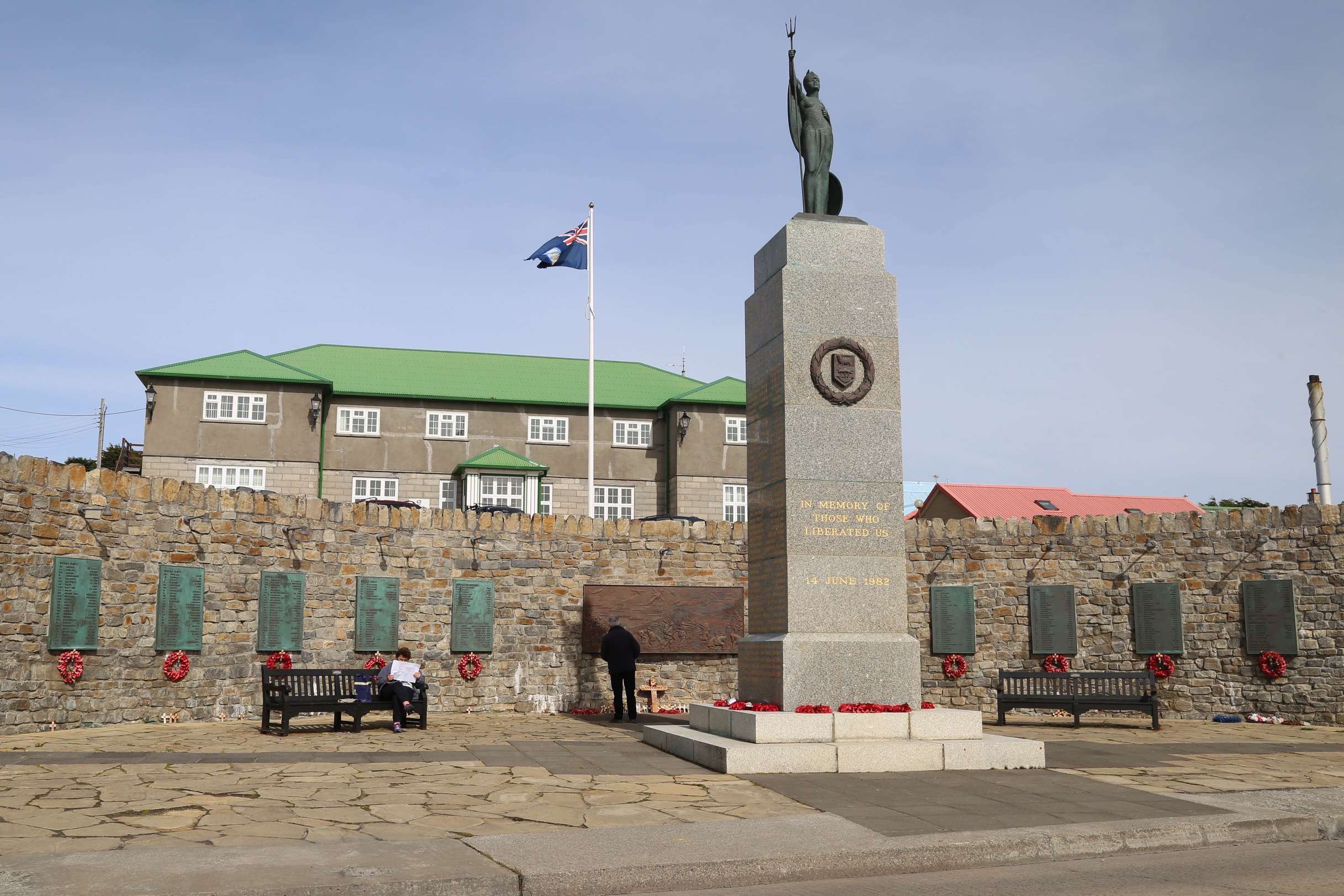 A memorial for the fallen commemorates those who gave their lives in the defense of freedom.

In March 1982 a group of Argentine scrap metal dealers landed at South Georgia Island, part of the South Sandwich Islands – also under British control – and nearly 1,000 miles east of the Falkland Islands. The Sandwich Islands are generally thought to have little strategic or economic importance. The scrap dealers wanted to scavenge metal from a defunct whaling station. But for some reason they raised the Argentine flag. The United Kingdom cried foul and dispatched a contingent of Royal Marines to rid the land of “invaders.” 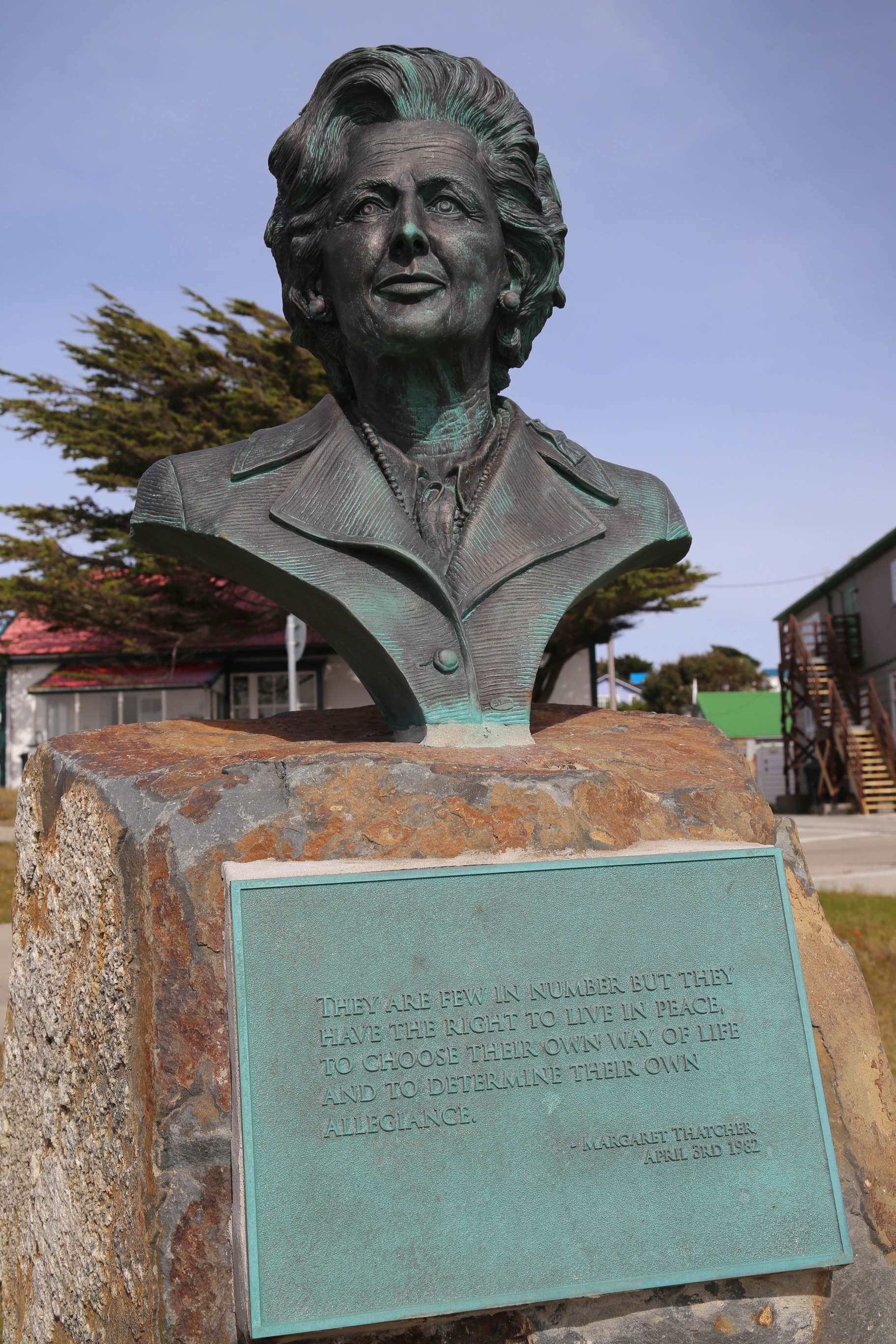 Prime Minister Margaret Thatcher rallied the charge to defend the Falkland Islands, and her memory is revered.

Argentina’s military rulers saw an opportunity to take back the Falkland Islands, gambling that the United Kingdom did not have the resources or will to defend possessions so far away. For Argentina’s military rulers, it was also a chance to gain favor with a restive Argentine population demanding a return to democracy and also to reassert national pride. And as history has shown time and again, once the wheels of war are set in motion, it is very difficult to put on the brakes. 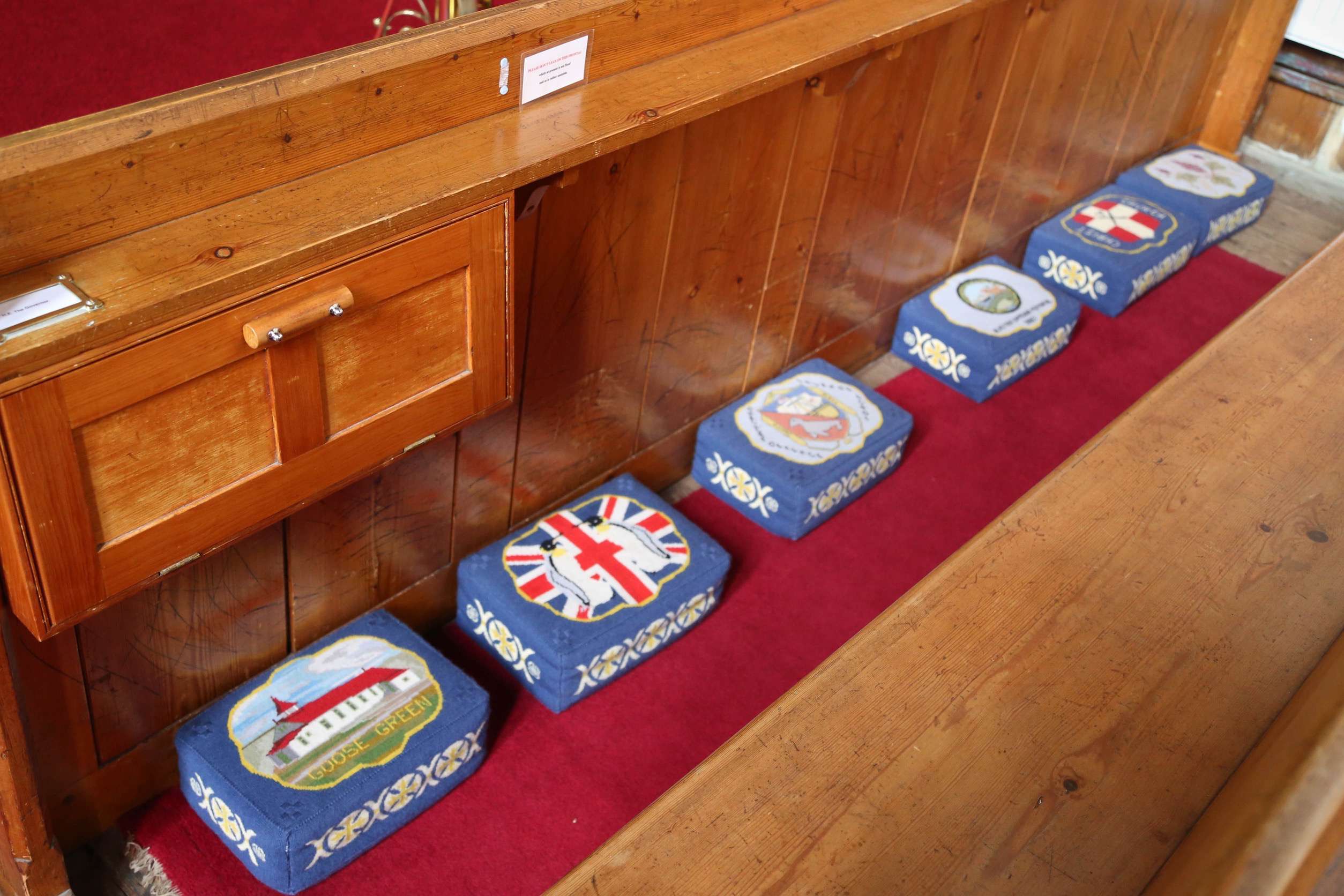 Kneeling pillows have been handmade from wool and await parishioners at Christ Church Cathedral. 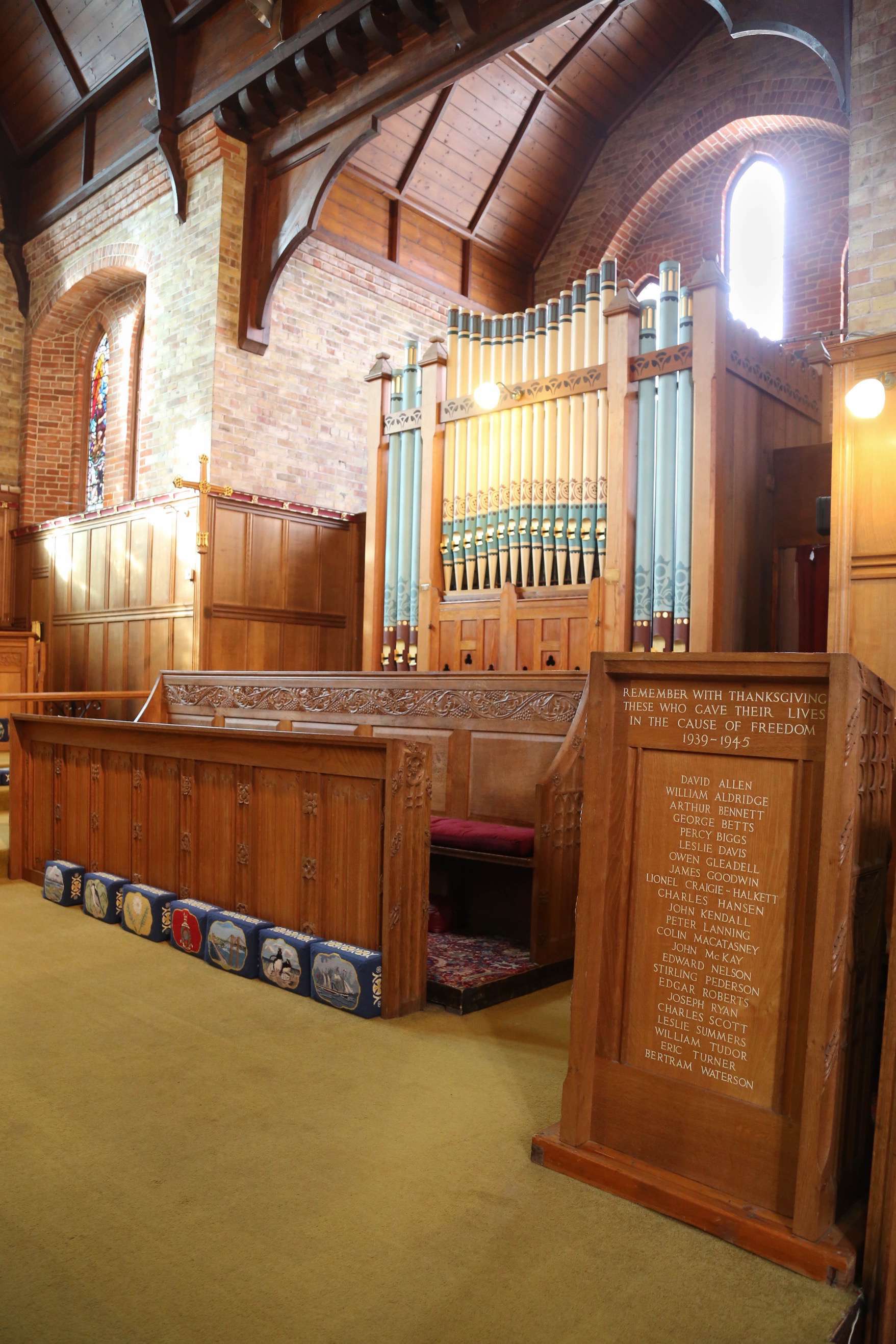 Next to the pipe organ is a list of those who have gave their lives during WWII.

Argentina invaded the Falkland Islands on April 2, 1982, landing amphibious troops at several locations on the islands, and supporting the effort with much of her naval power. The residents of the islands, who today number less than 3,000 people, put up token resistance. Not surprisingly, Argentina’s military rulers misjudged the United Kingdom’s resolve. That set in motion the UK’s robust military response. 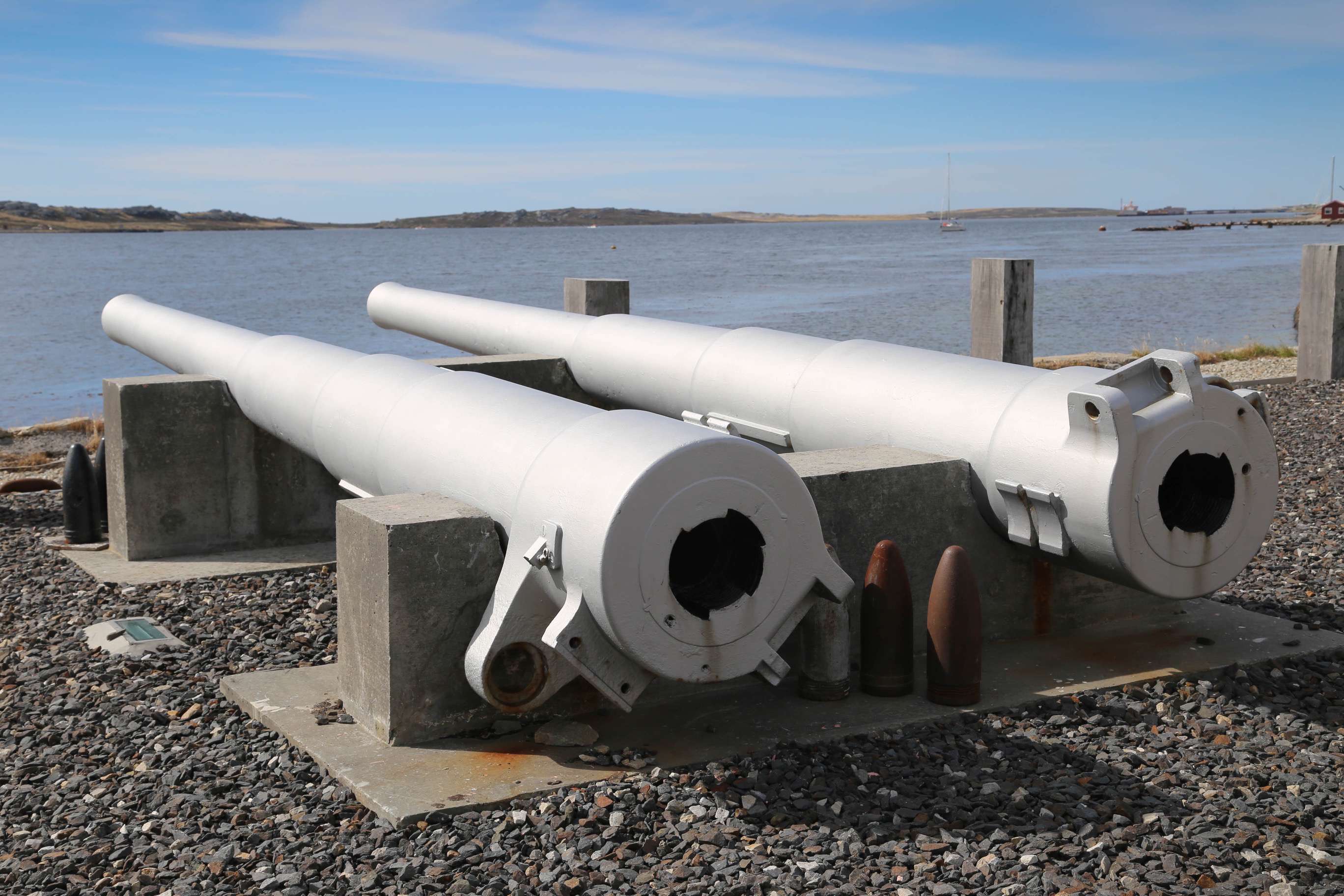 The artillery pieces are silent now, but in both world wars, they were ready to defend the islands.

Soldiers, ships and aircraft were lost on both sides. The ARA General Belgrano, a light cruiser was sunk by a British nuclear-powered submarine and more than 320 Argentinian sailors died. Two days later a British destroyer, HMS Sheffield was struck by missiles fired by the Argentine air force. The Sheffield sank and 20 sailors were killed. On May 21, the British frigate HMS Ardent was attacked and 22 sailors were killed. Altogether, 649 Argentinian soldiers and sailors died, 255 British soldiers and sailors died and three residents of the Falkland Islands were also killed. The war ended after 74 days, with a British victory in both the Falkland Islands and the South Sandwich Islands. June 14 is celebrated as Liberation Day in the Falkland Islands and a peace treaty of sorts was signed in 1989. Argentina continues to make claims to the Falkland Islands, and the issue of ownership is still a tense subject between the two nations. 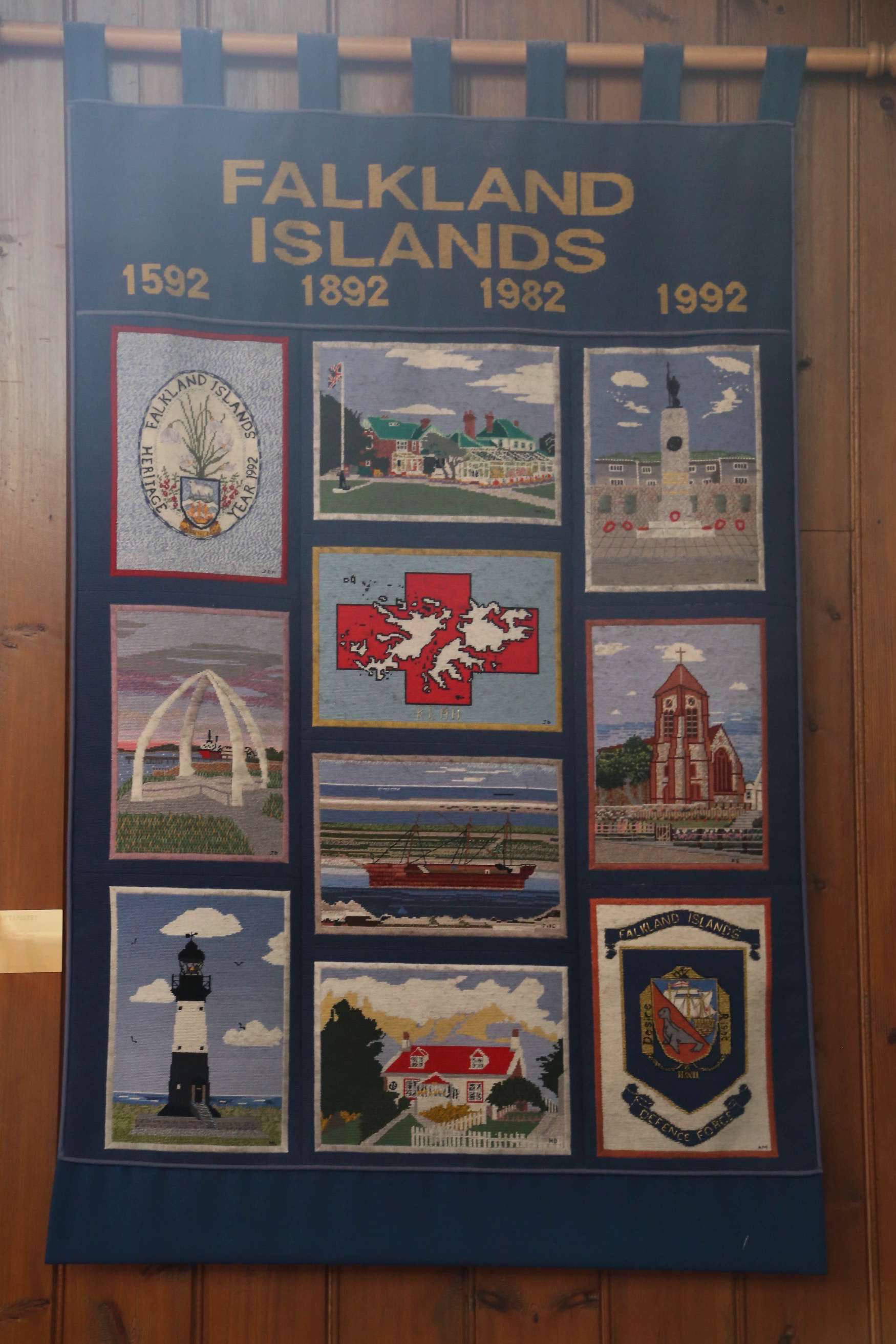 This tapestry in Christ Church Cathedral recounts significant dates, places, and events in the history of the Falkland Islands.

The residents of the Falklands are primarily of British descent and they are fiercely proud of their link to the United Kingdom. In 1983 they were granted full British citizenship and they use the British pound sterling as their currency. Their flag is a modified, or “defaced” Union Jack that includes the image of a sheep. It’s not surprising a sheep adorns the Falklands flag, because sheep outnumber residents nearly 173 to one. From the 1870s to the 1980s sheep and wool were the major sources of revenue for the islands. Today, tourism, eco-tourism, commercial fishing, servicing the commercial fishing industry and agriculture are also important sources of revenue. 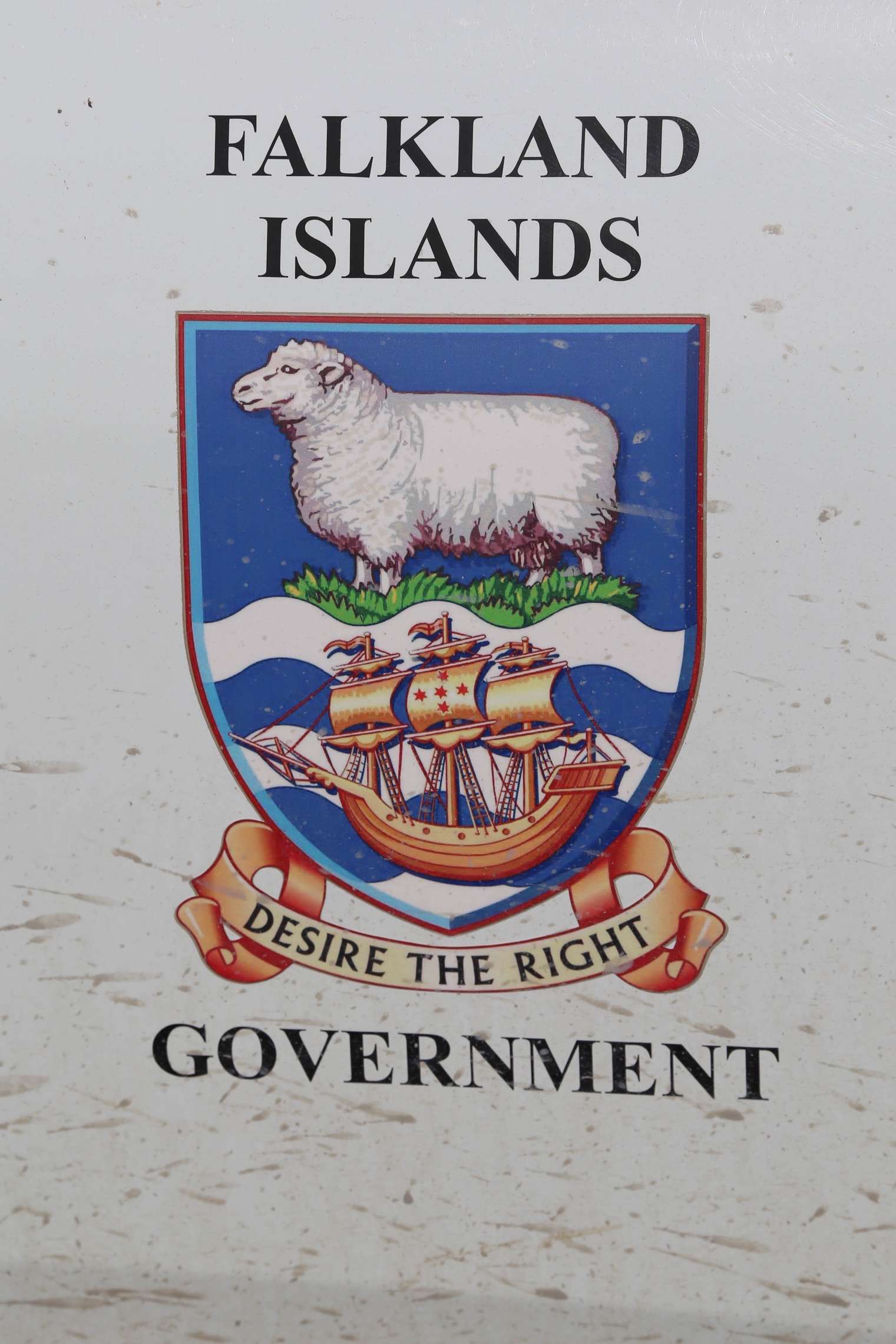 When you live in a place where the sheep outnumber people almost 173 to one, it makes sense to showcase sheep, as on this government vehicle. The ship Desire played an important role in establishing British ownership of the Falkland Islands. 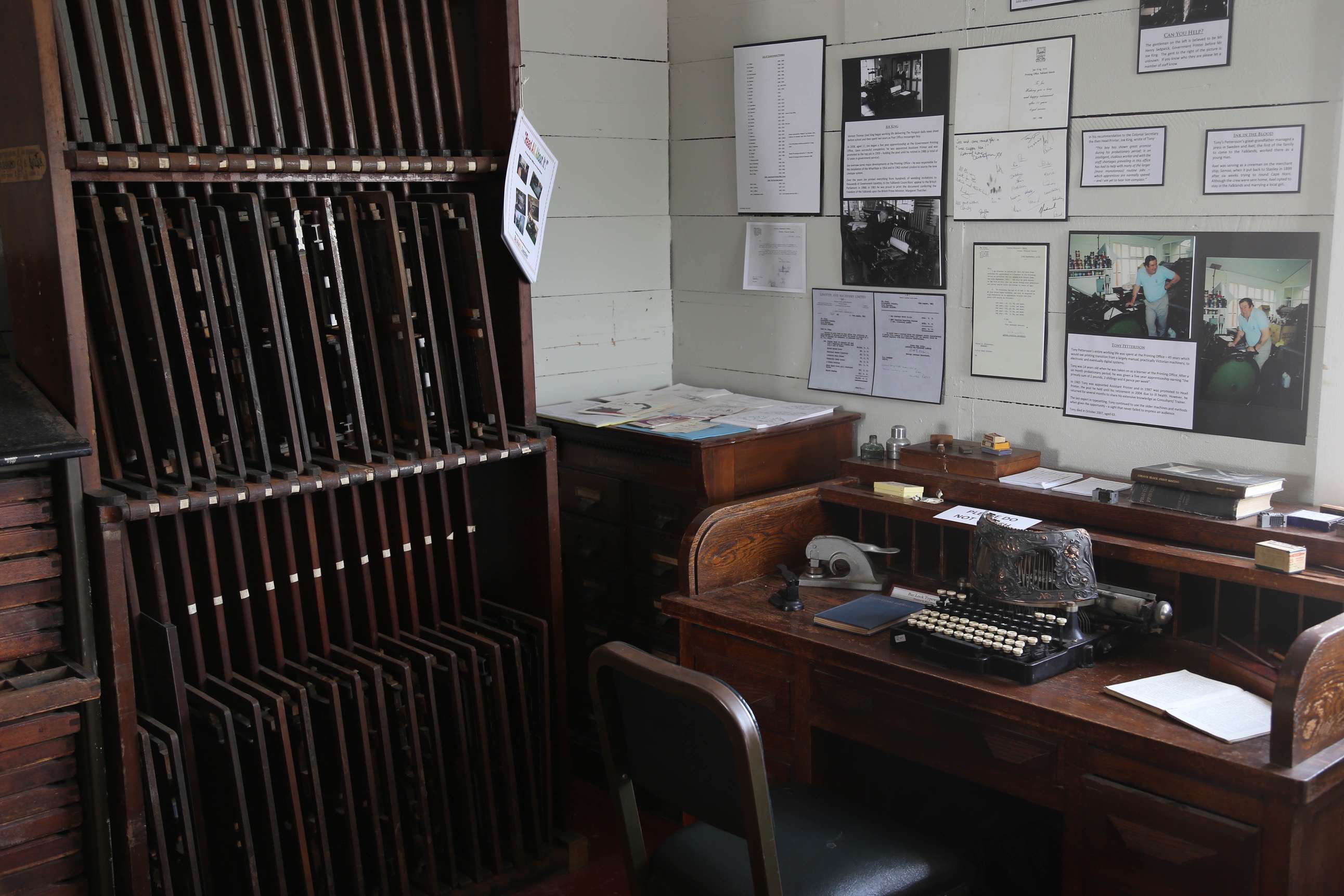 Being isolated and so far from the mother country meant Falklanders had to be self reliant. The print shop was the communications hub for the Falkland Islands, producing a newspaper, announcements, and wedding invitations for the tight-knit community. 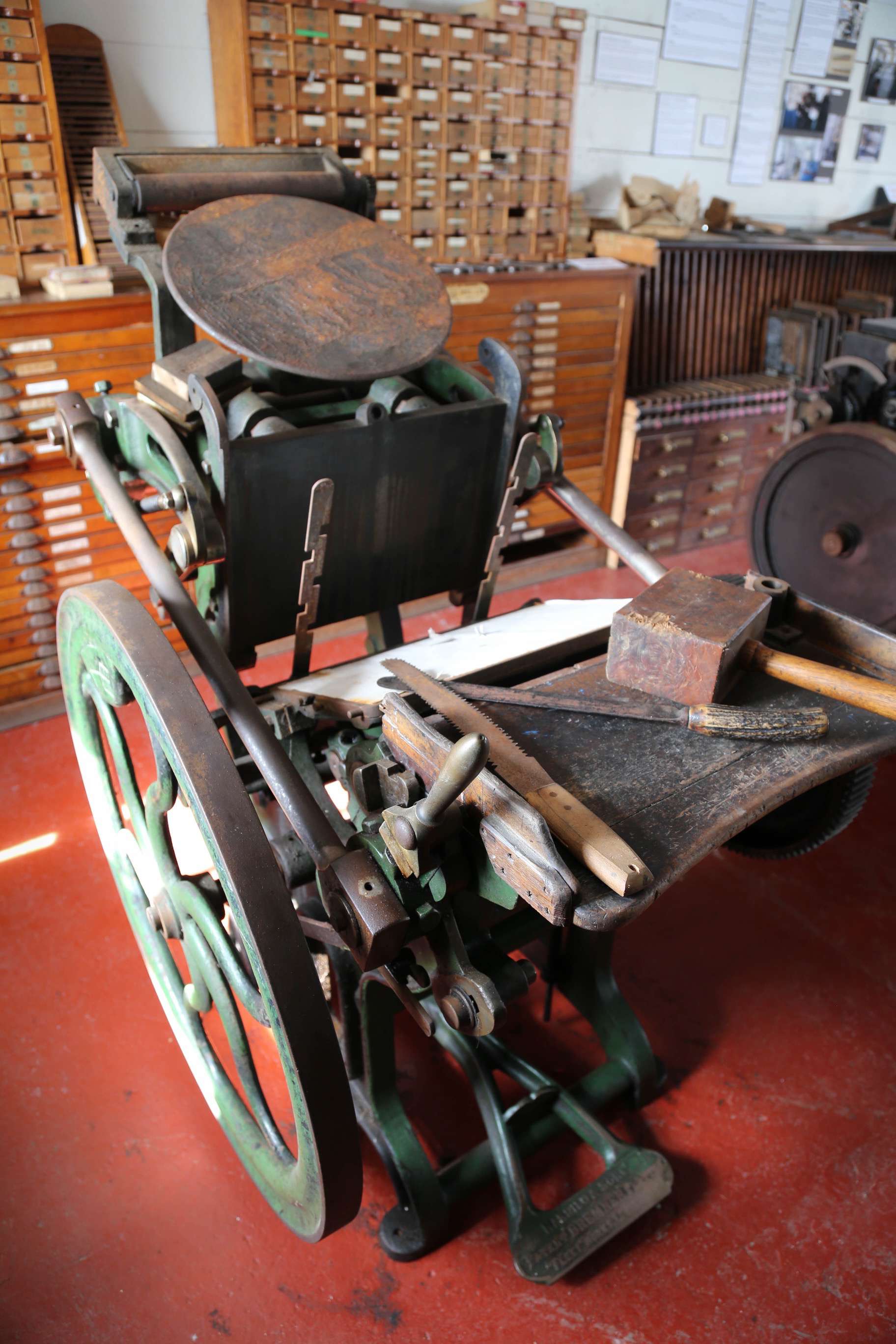 This platen press was operated by men such as Tony Peterson, who worked for 45 years in the print shop, until he retired in 2004. Among other things he is remembered as the last expert in setting type by hand.

This rotary press replaced the platen press. Joe King, who gave 52 years of service to the islands, started as a boy delivering newspapers before school, and later printing copies of the Penguin Daily News. In 1983 he printed the document conferring Freedom of the Falkland Islands on this press.

In the 1970s energy companies began searching the ocean floor around the Falkland Islands for oil and natural gas, in part because the area has characteristics similar to the North Sea. In 1996 leases were sold for exploration but initial results were disappointing. But in 2000, thanks to improvements in three-dimensional seismic mapping, large reserves were discovered north of the islands and it is currently estimated there are upwards of one billion barrels of oil available there. 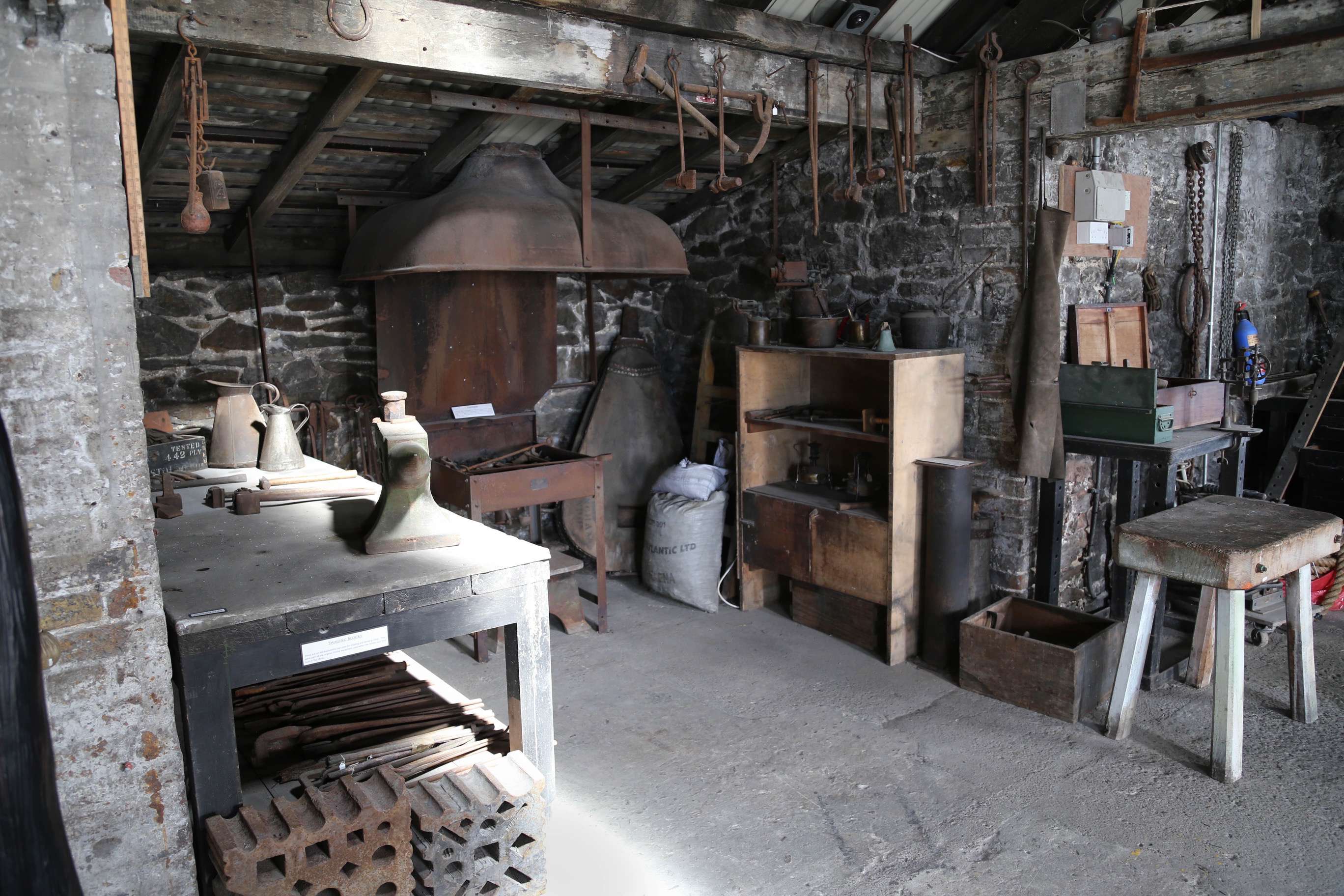 The smith and machine shop are museum set pieces now, but in their day they supplied Falkland Island residents with vital pieces of equipment.

Getting to the Falkland Islands can be an iffy proposition since the weather can be severe, thanks to the islands’ location at 52 degrees south – a latitude known as the “ferocious fifties.” In 2015 an estimated 60,000 cruise ship passengers visited the islands, though it is not unusual for a ship to skip a visit to the Falklands because of the unpredictable weather. 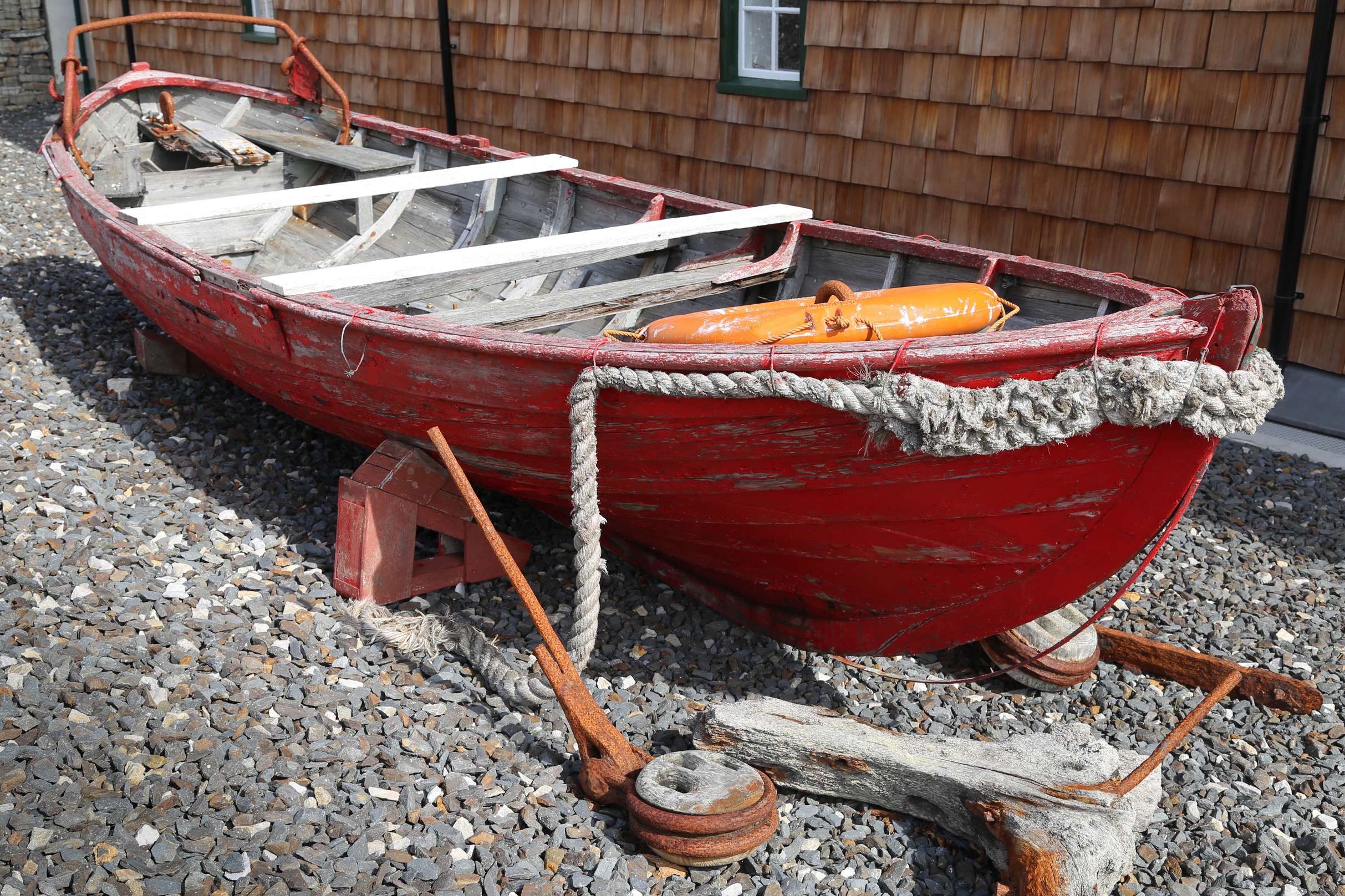 Reminders of the islands’ seafaring history can be seen in many places around the Falkland Islands. 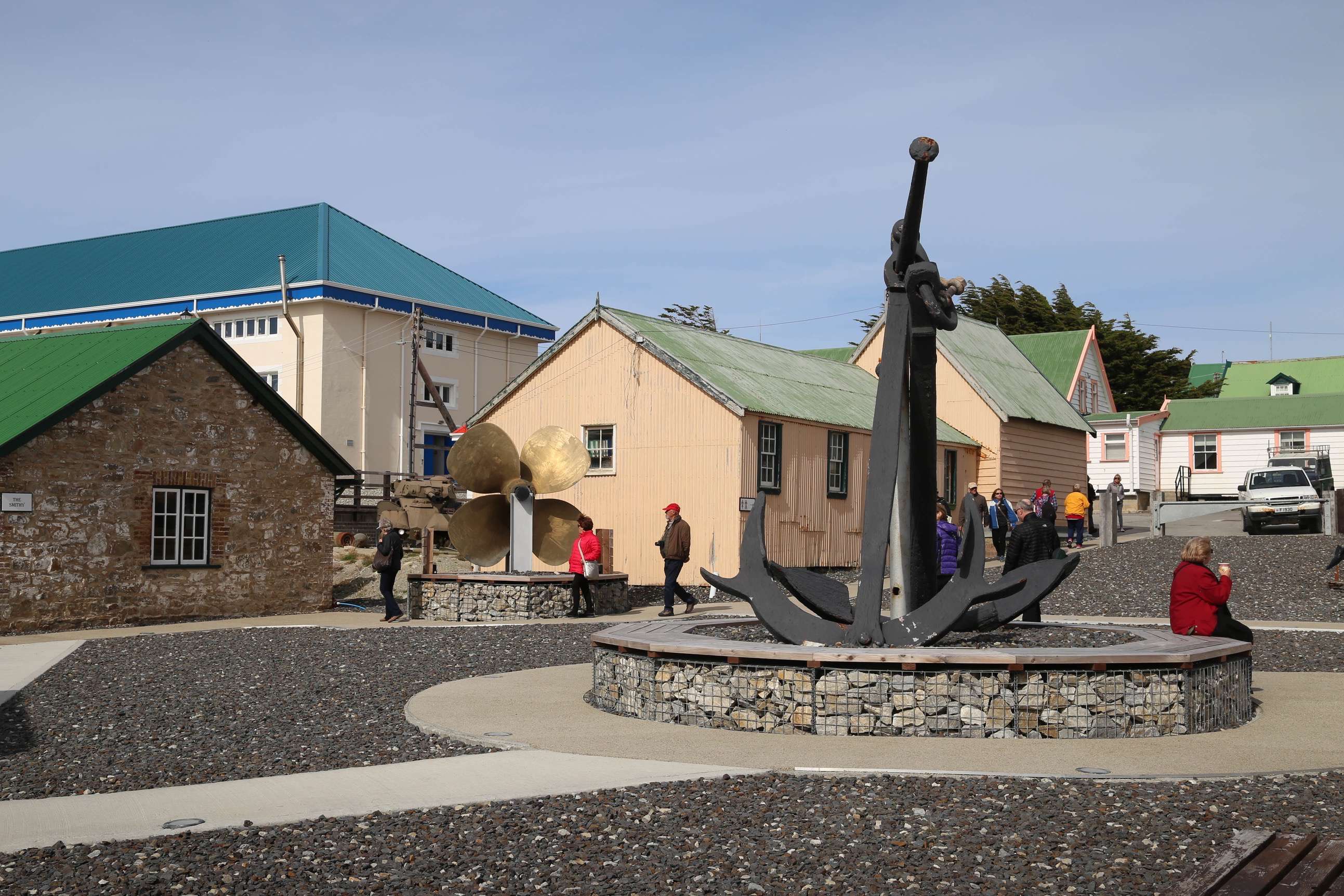 The museum proudly displays the life and history of the Falkland Islands. Seafaring, living self sufficiently, and the war with Argentina in 1982 provide visitors with a deeper appreciation for the life — and struggles — of those who call these islands home.

Ever persistent, Argentina waged a campaign to woo the Falkland Islanders back, and in March of 2013 a referendum was held to answer the question. In a smack down of epic proportions, nearly 92 percent of registered voters went to the polls and 99.8 percent voted to remain with the United Kingdom, making it abundantly clear whom they see as their mother country. 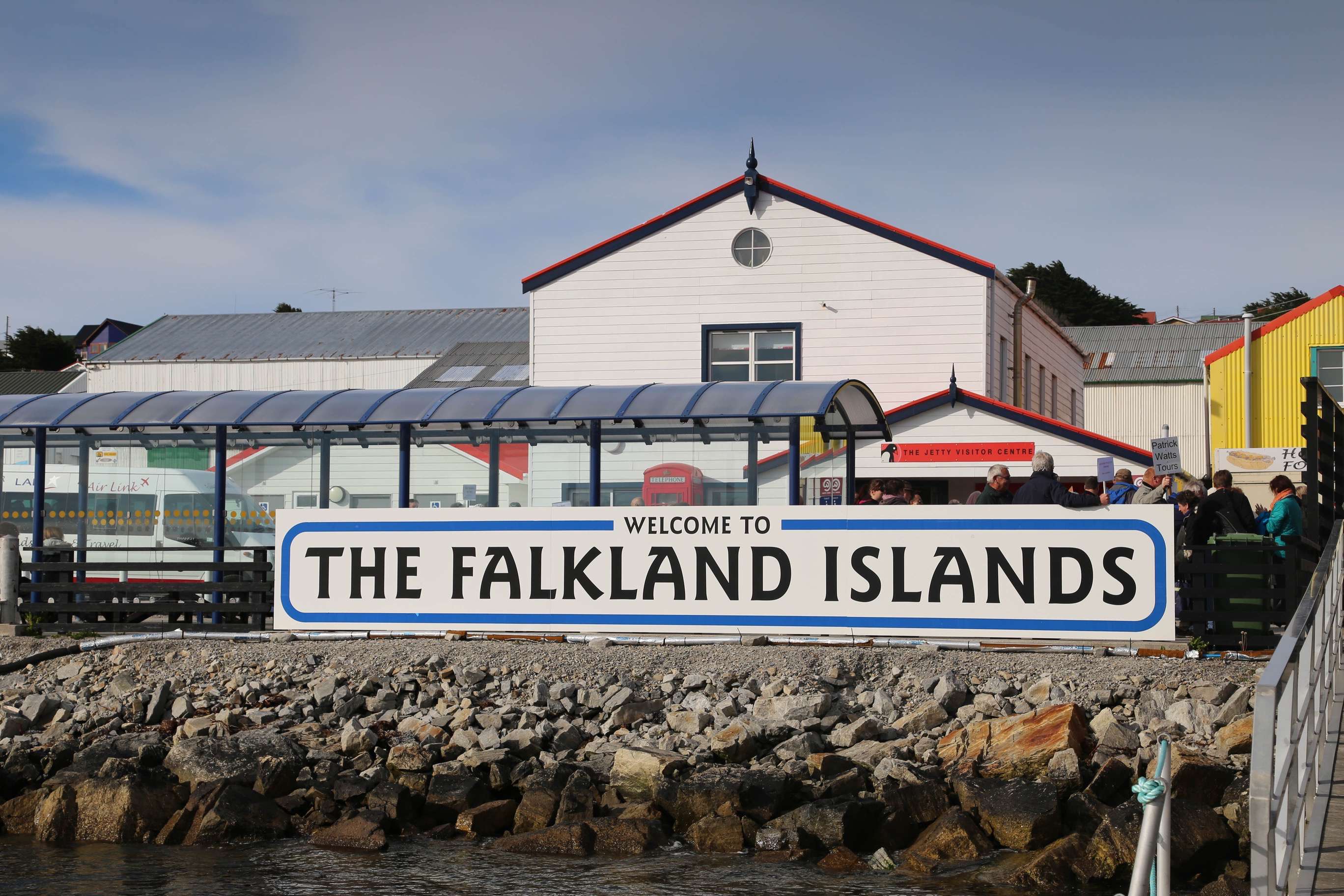 In case there’s any question about the name, this sign makes it clear. 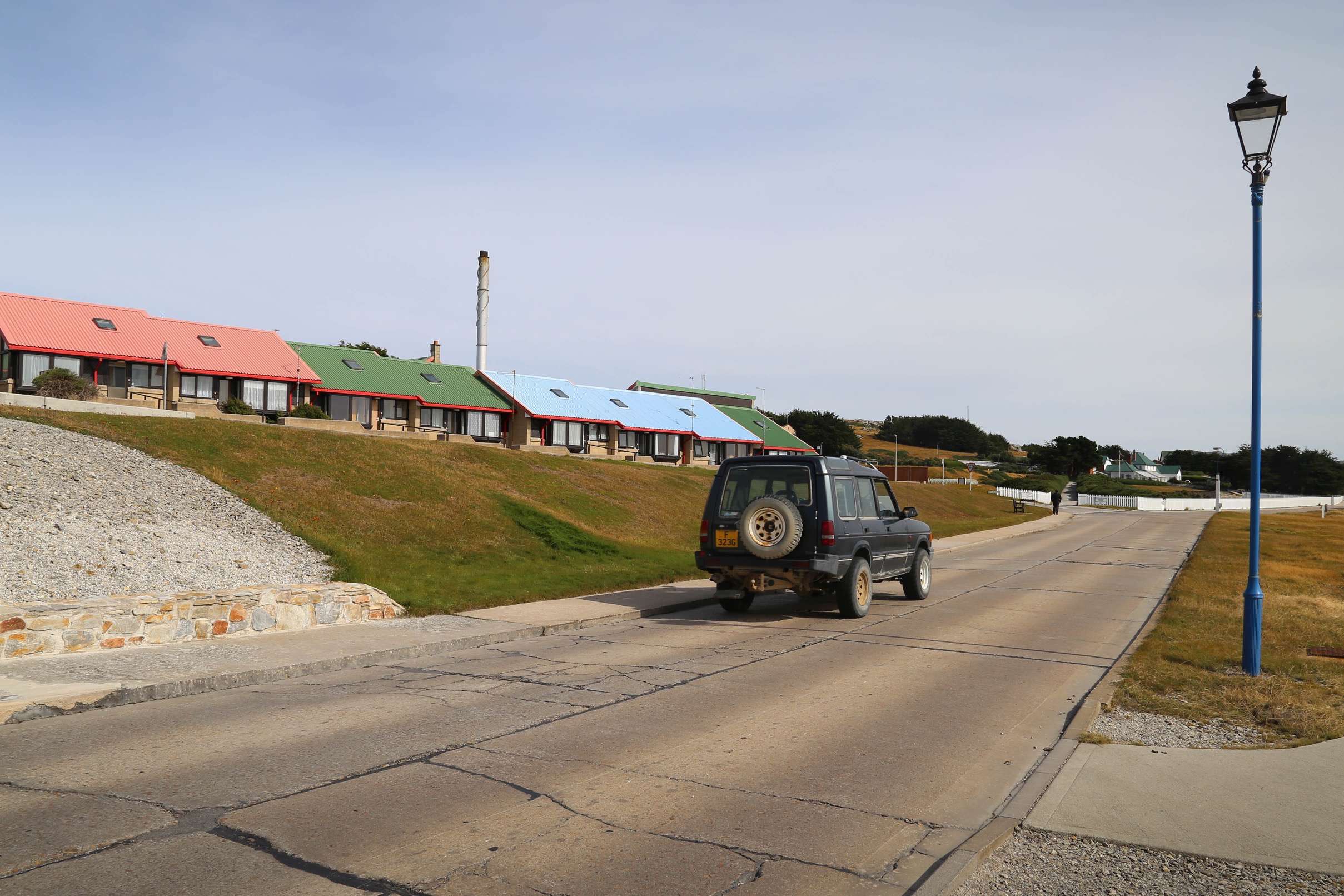 The economy is diverse and healthy, and except for defense, provided by the United Kingdom, the islands are financially self sufficient.

Locals welcome visitors, whether they come for just the day from a cruise ship, or for a longer stay to explore some of the countryside or see some of the wildlife. They are happy to answer questions and show off their islands. And on a sunny day, when the winds are calm and the seas are fair, residents will tell you that the troubled times of the war are now viewed as proof that British resolve can win the day. 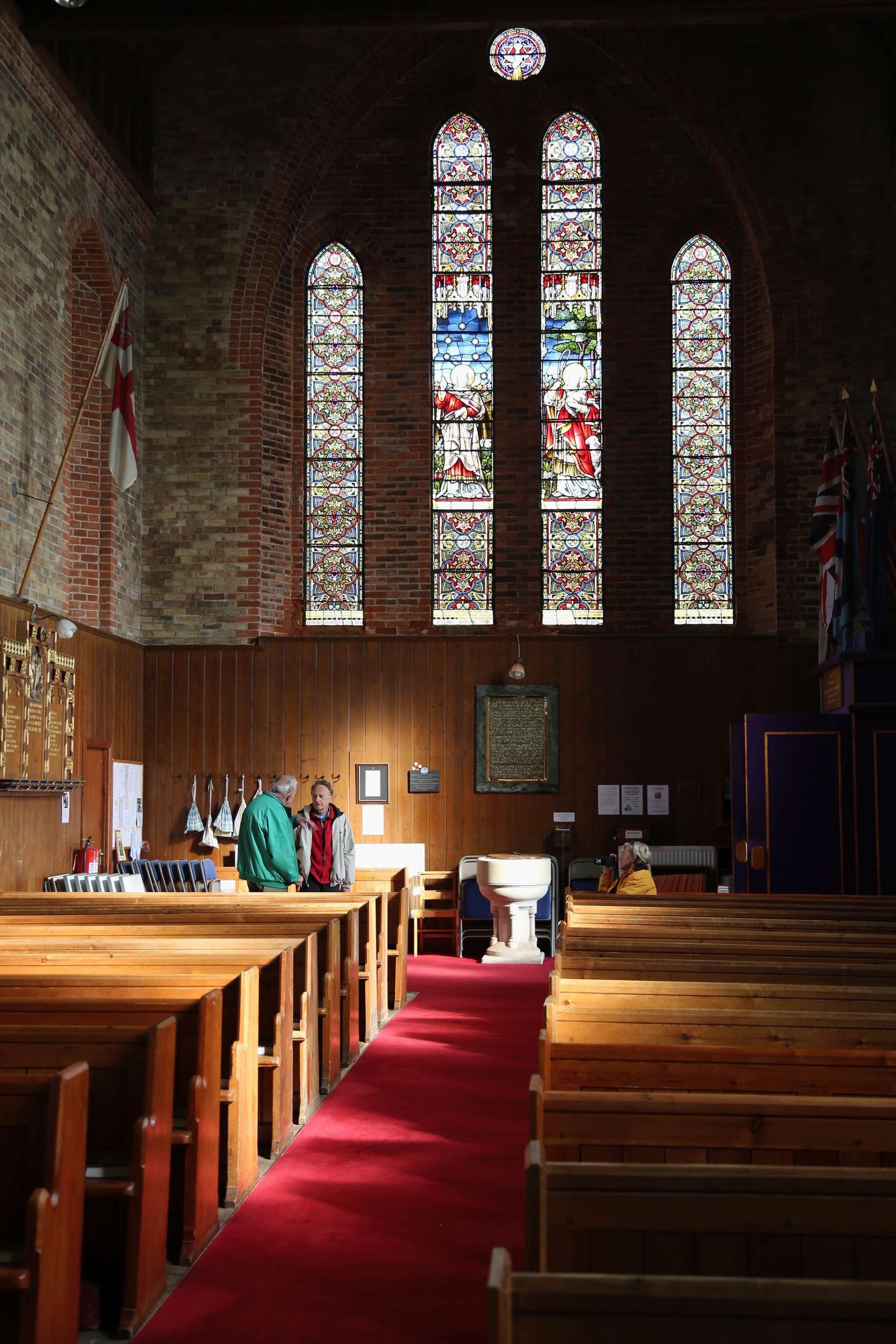 A docent, in the green jacket, at Christ Church Cathedral, is only too happy to share with visitors some of the history and flavor of the Falkland Islands.

Argentina may call this land Islas Malvinas, but don’t make that mistake when you visit – to those who live here it’s the Falkland Islands – today and forever more.

For more information about the Falkland Islands, visit these websites: