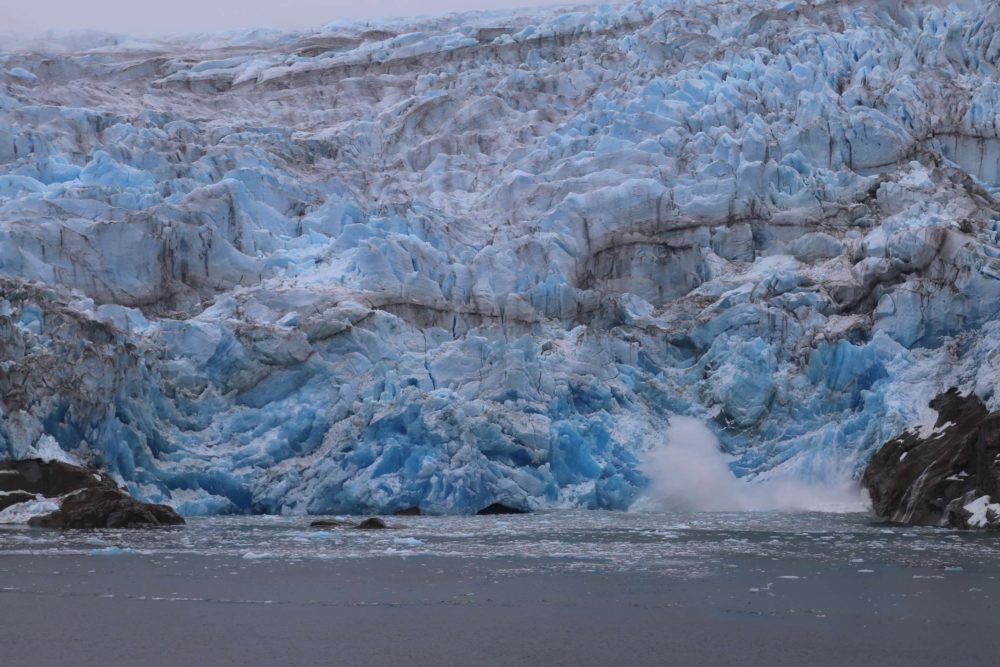 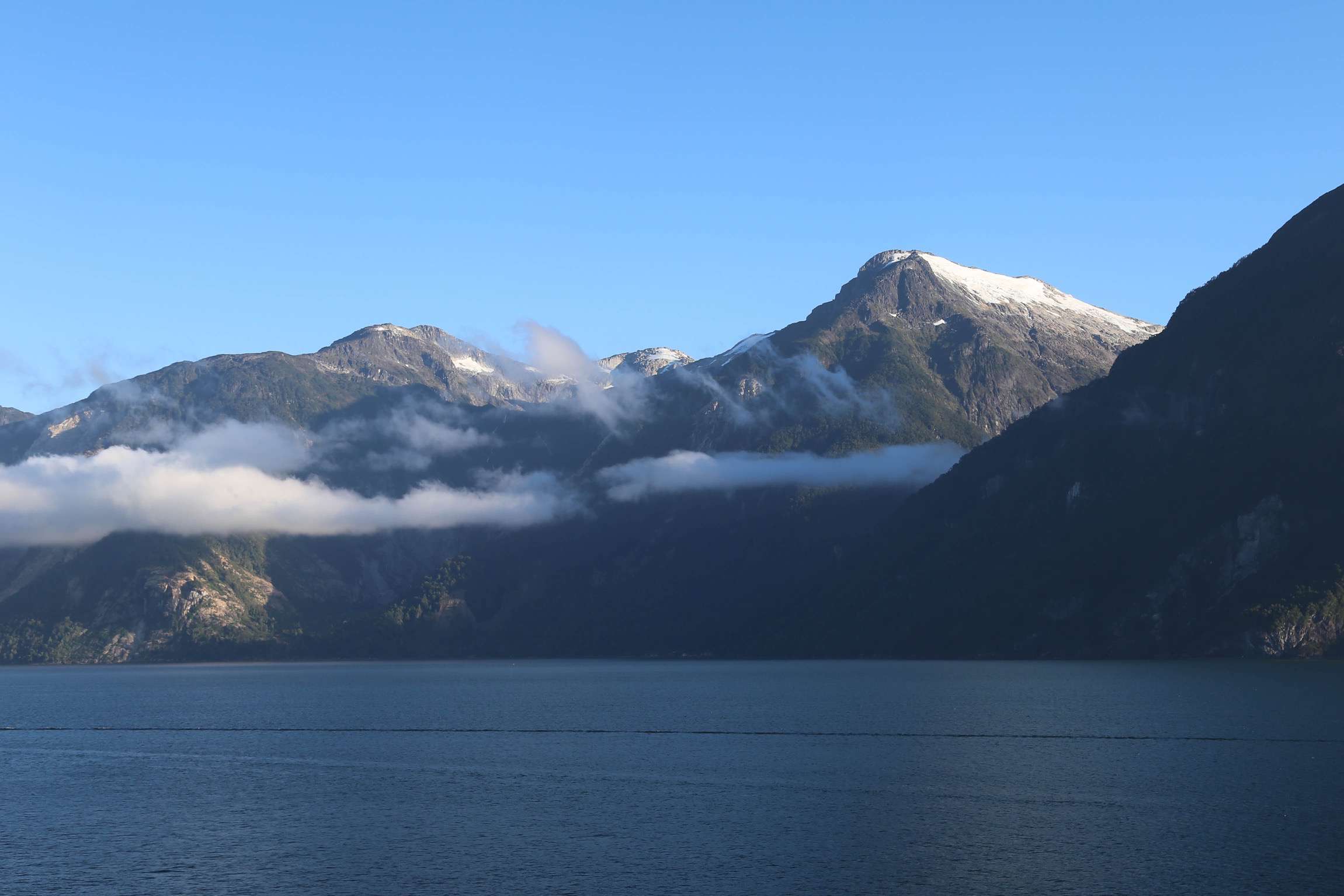 Chile is an amazing collection of natural wonders and the southern coast has a beauty all its own. 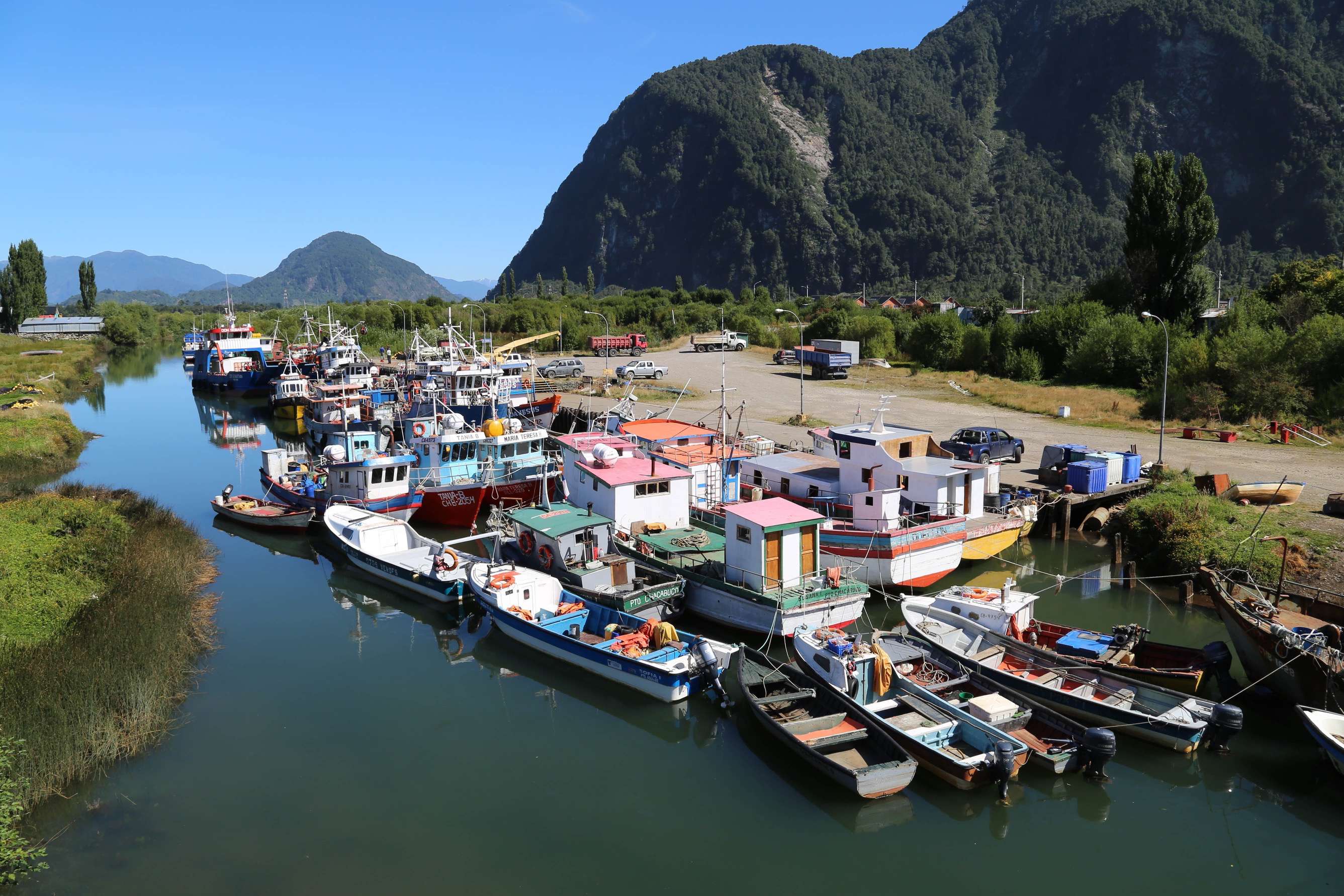 Puerto Aysen, Chile is one of the small towns that dot her southern coast. The boats collect in the safety of a small inlet. 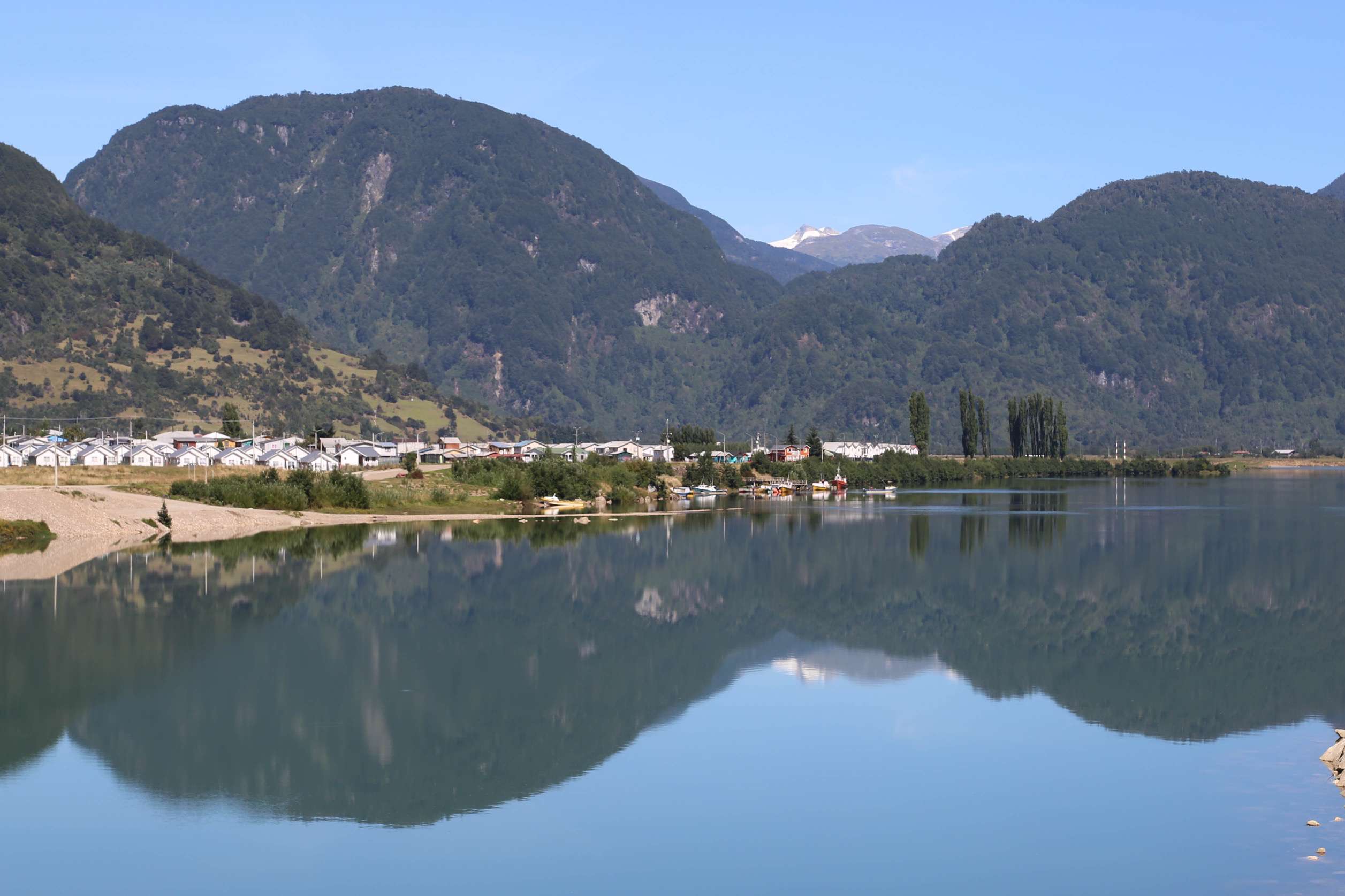 When skies are blue and not a puff of wind disturbs the water, this is idyllic. But when the skies are gray and the winds howl, life can be tough. 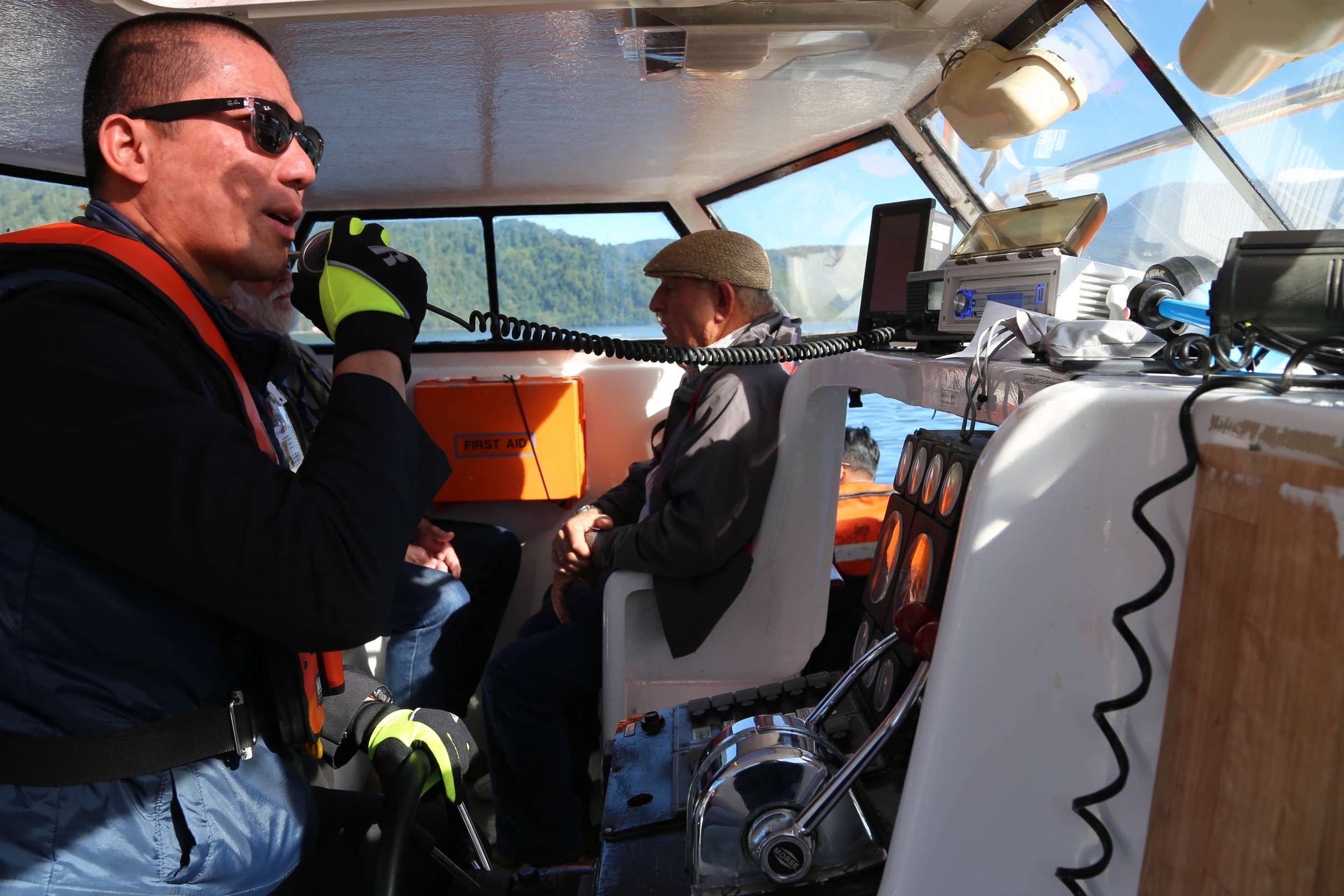 A tender boat pilot steers his craft toward port so passengers can enjoy a day ashore.

Chile is home to an amazing collection of natural wonders and her southern coastal region offers an array of travel treats – world famous fjords, glacier watching and a chance to go around Cape Horn – the southern-most spot of South America. 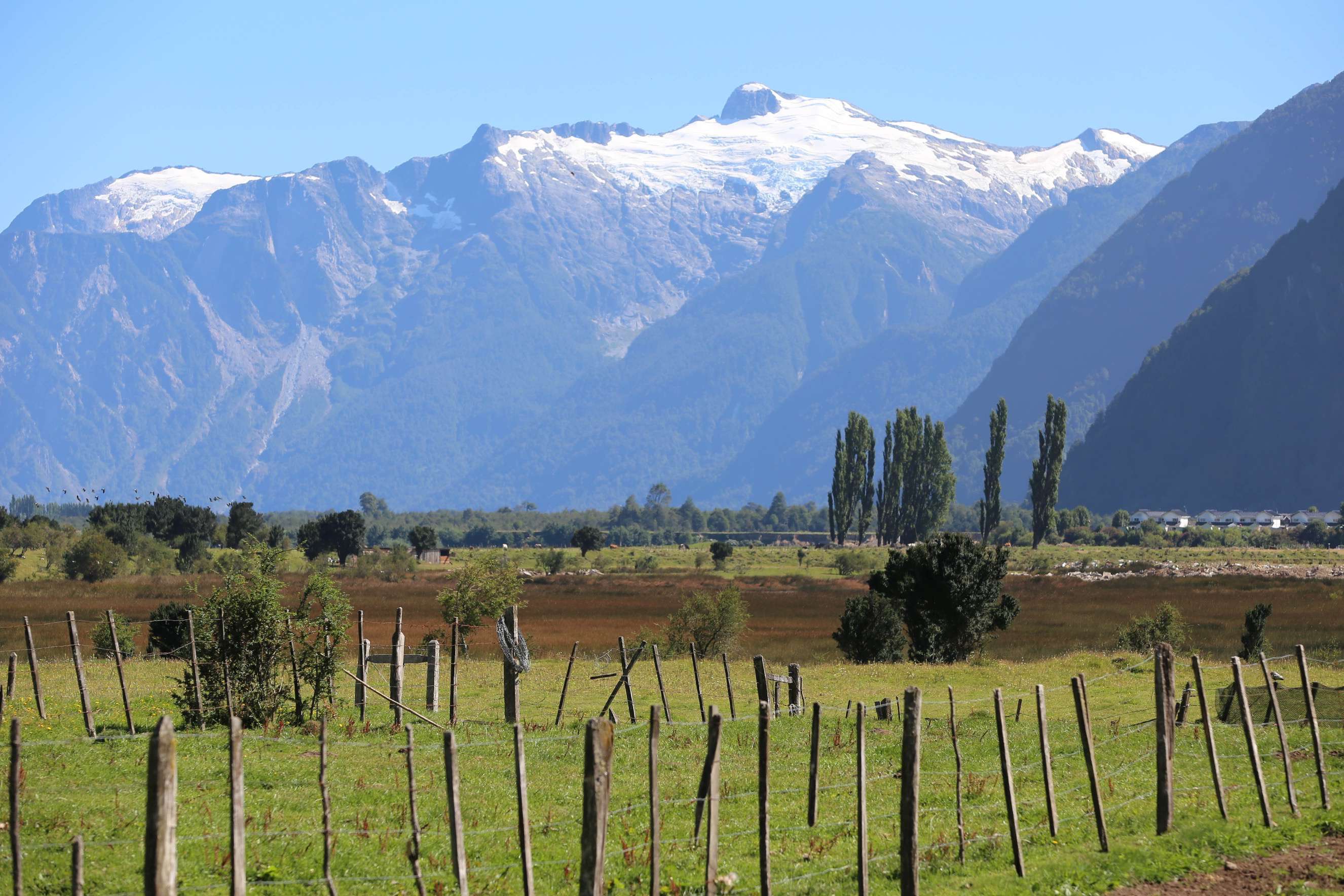 How many spots in the world can you see a lush green field where cattle graze and see a mountain glacier at the same time?

The easiest way to take in this beauty is aboard a ship. Treat yourself to this experience and you’ll see firsthand Chile’s amazing coastal beauty that has been created thanks to the geology of tectonics, time, and climate. 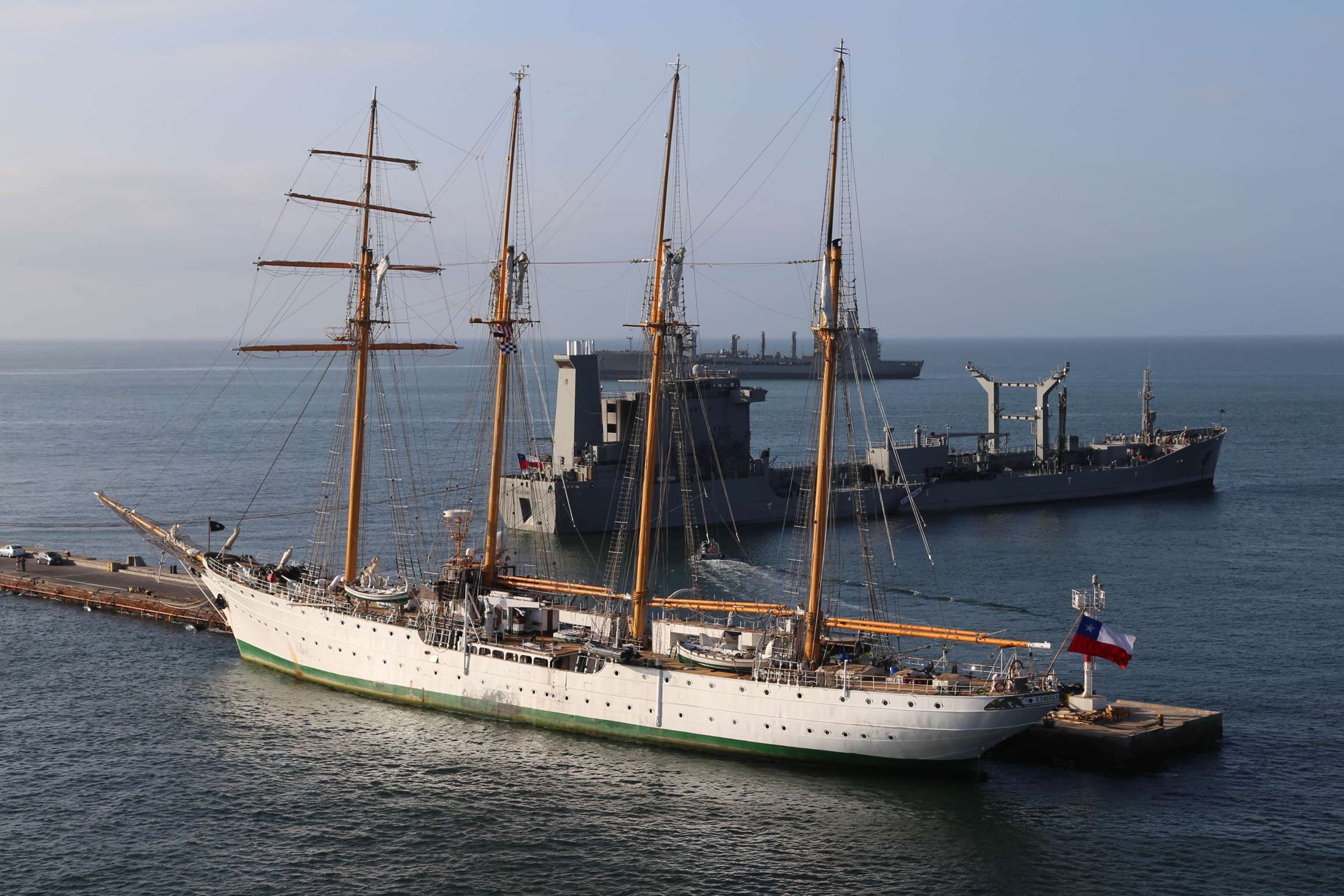 The Esmerelda is a four-masted ship and she is a proud member of Chile’s navy is anchored at Valparaiso.

Fjords were created during the Ice Age, over many millennia, when massive glaciers scoured the rock bed below them and then retreated, allowing the seawater to inundate the valley.

The fjords along Chile’s southern coast are some of the most impressive in the world. 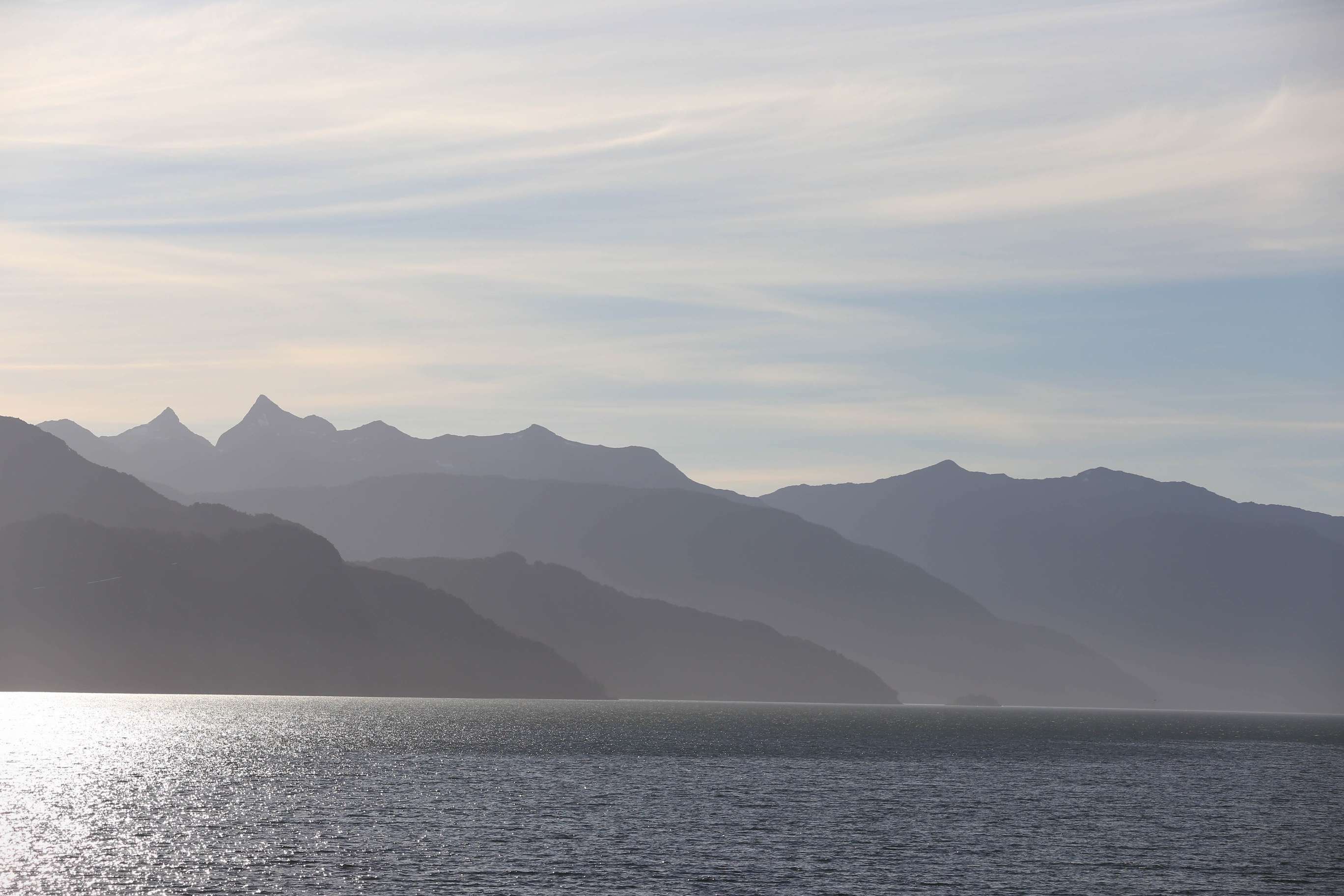 The waters may appear calm, but sailors must keep a close watch among the channels and islands of Chile’s southern coast.

The combination of tectonics, climate conditions and the passage of time are a few of the main reasons Chile is home to some of the most impressive fjords in the world, two of which are more than 4,000 feet below sea level. 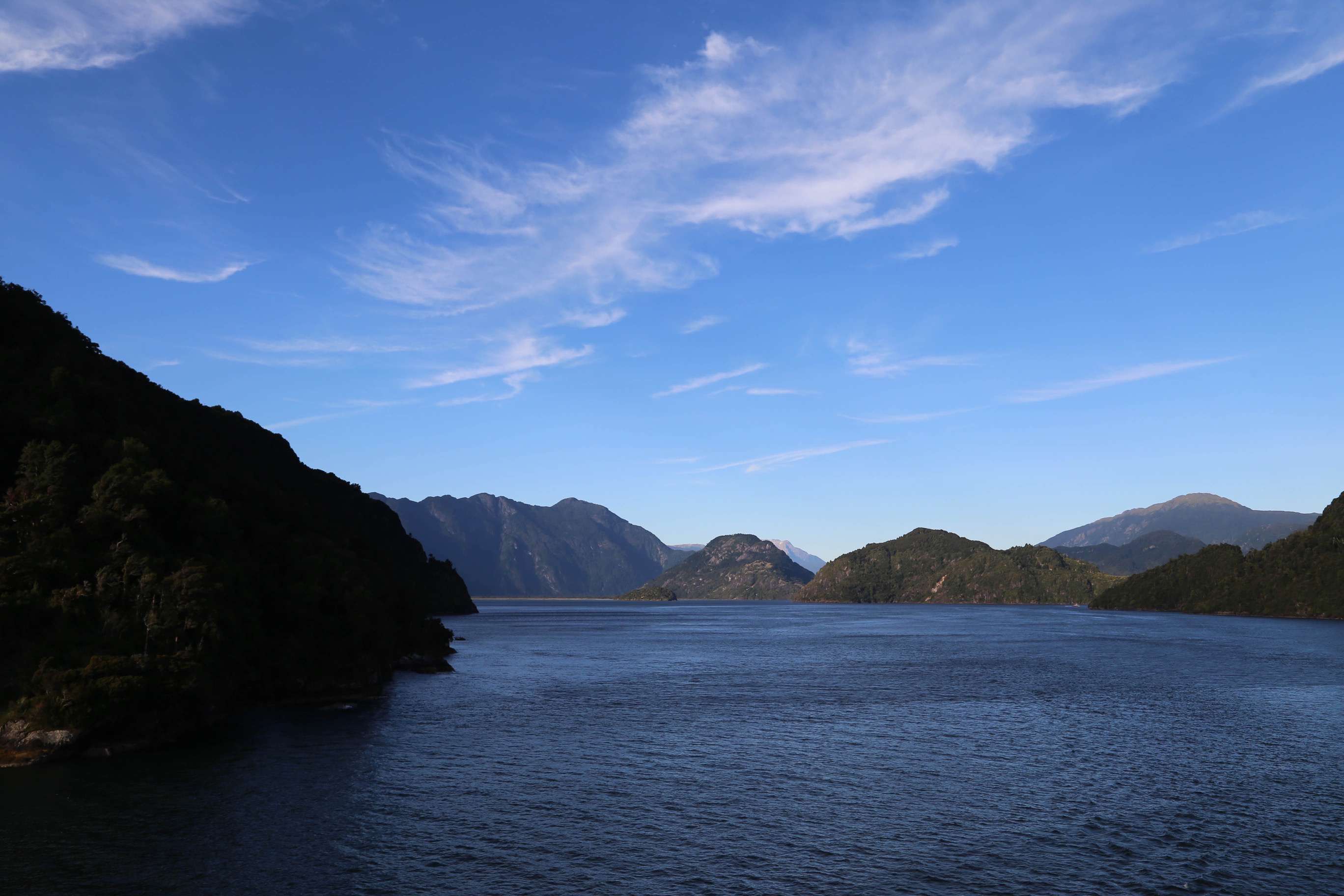 Weather conditions in southern Chile are fickle and can change from sunny to overcast very quickly. 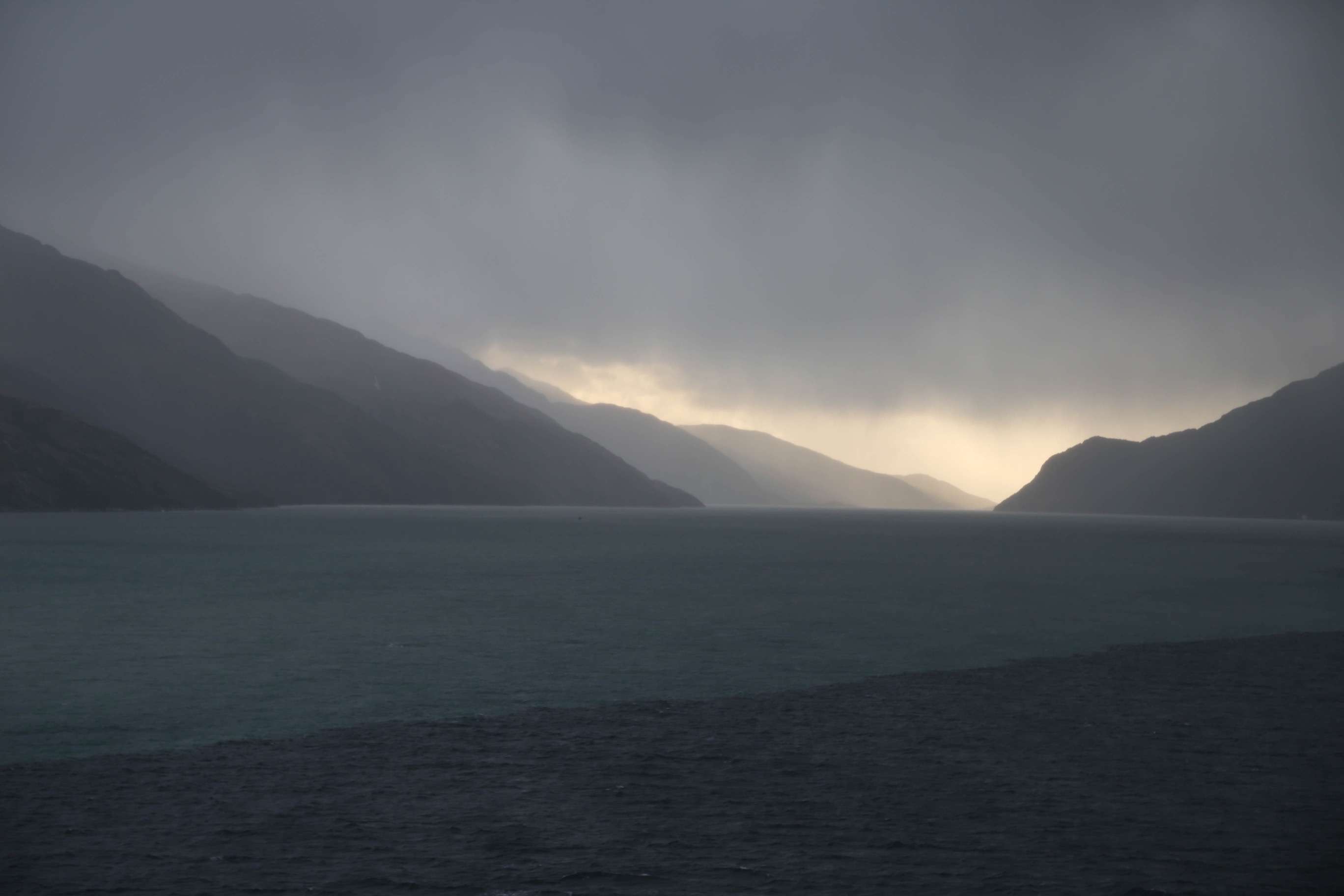 The boundary line of color is the difference in salinity between seawater, and diluted glacial melt water.

Tectonics plays an important role in how Chile’s southern region came to be. Plate tectonics are how continents and landmasses move or “drift” around the earth, riding atop immense plates. And tectonics account for earthquake activity, the creation of mountain ranges and the shape of continents. The earth has seven or eight major tectonic plates (based on who is doing the counting), along with 10 minor tectonic plates and approximately 50 micro plates. 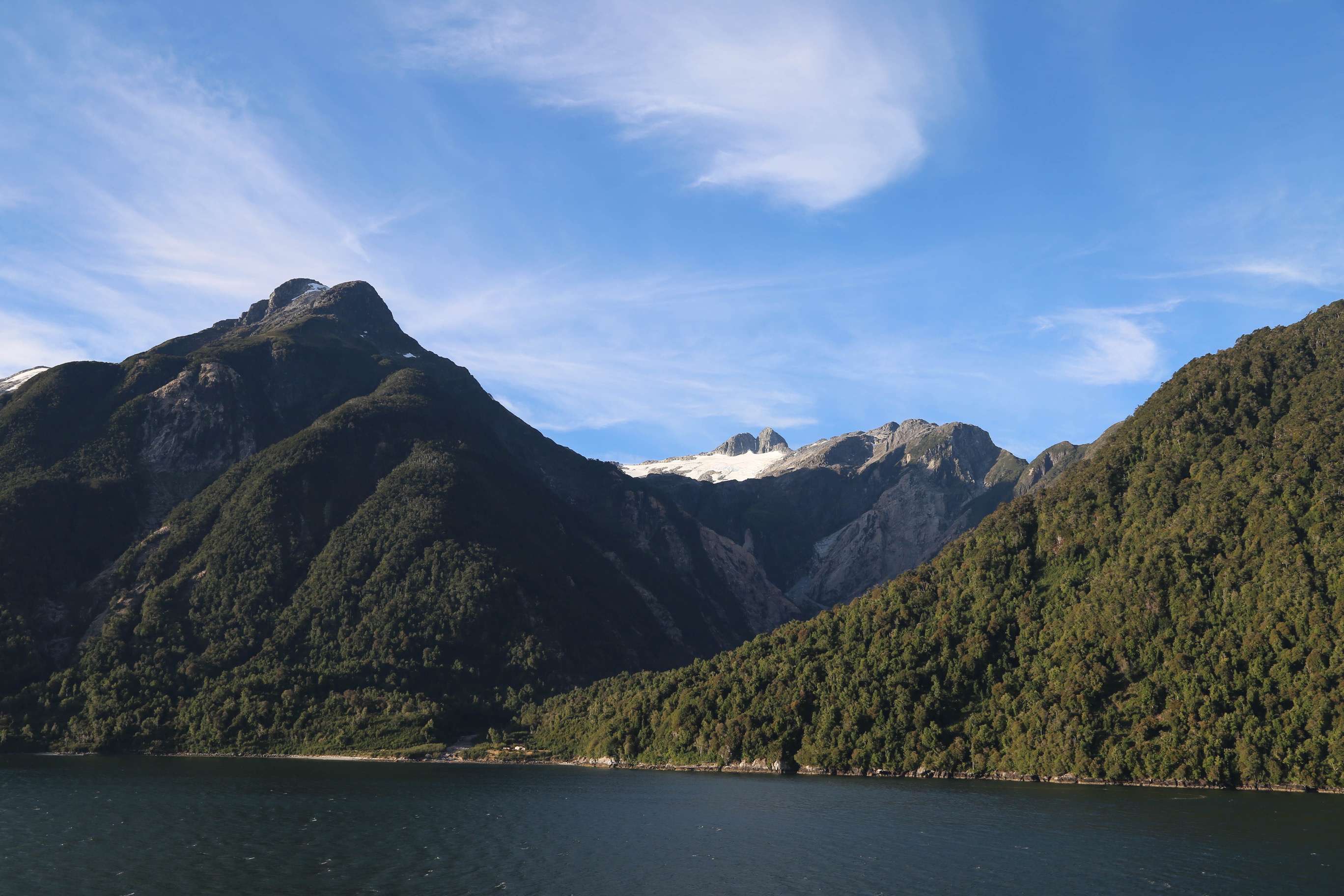 The mountains in this part of Chile are granite, so the glaciers that created the fjords are so huge as to defy imagination. 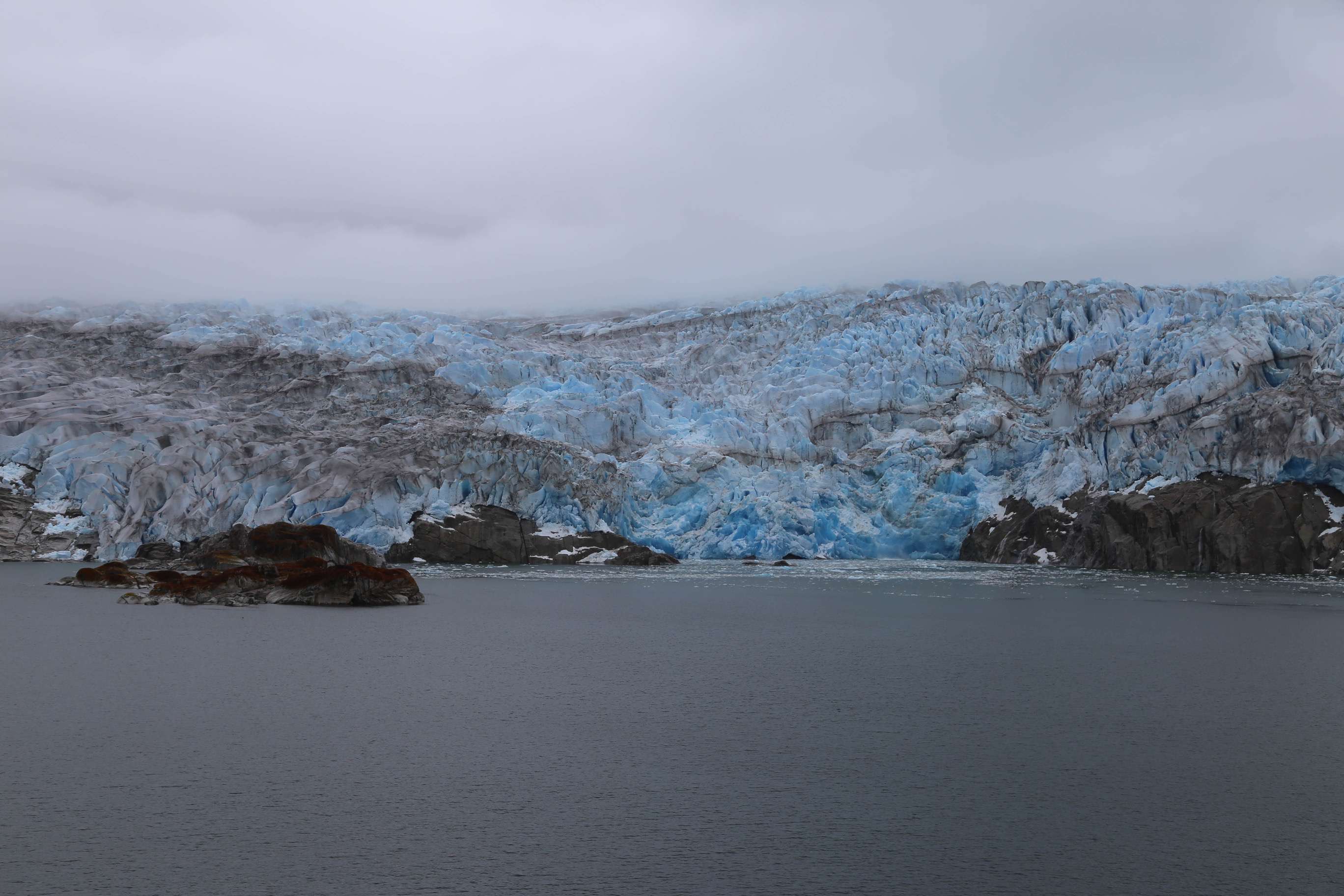 In the southernmost regions of Chile, a glacier makes it way toward the sea. As it grinds and churns, rocks and debris give it a dingy appearance.

In the southern region of Chile, four tectonic plates are at work. The two major plates are the Antarctic and South American plates, and the minor plates are the Nazca and Scotia plates. Few places in the world have as many plates affecting one region. Such tectonic activity accounts for, in part, the Andes Mountains and also the powerful earthquakes that have rattled Chile over the centuries. 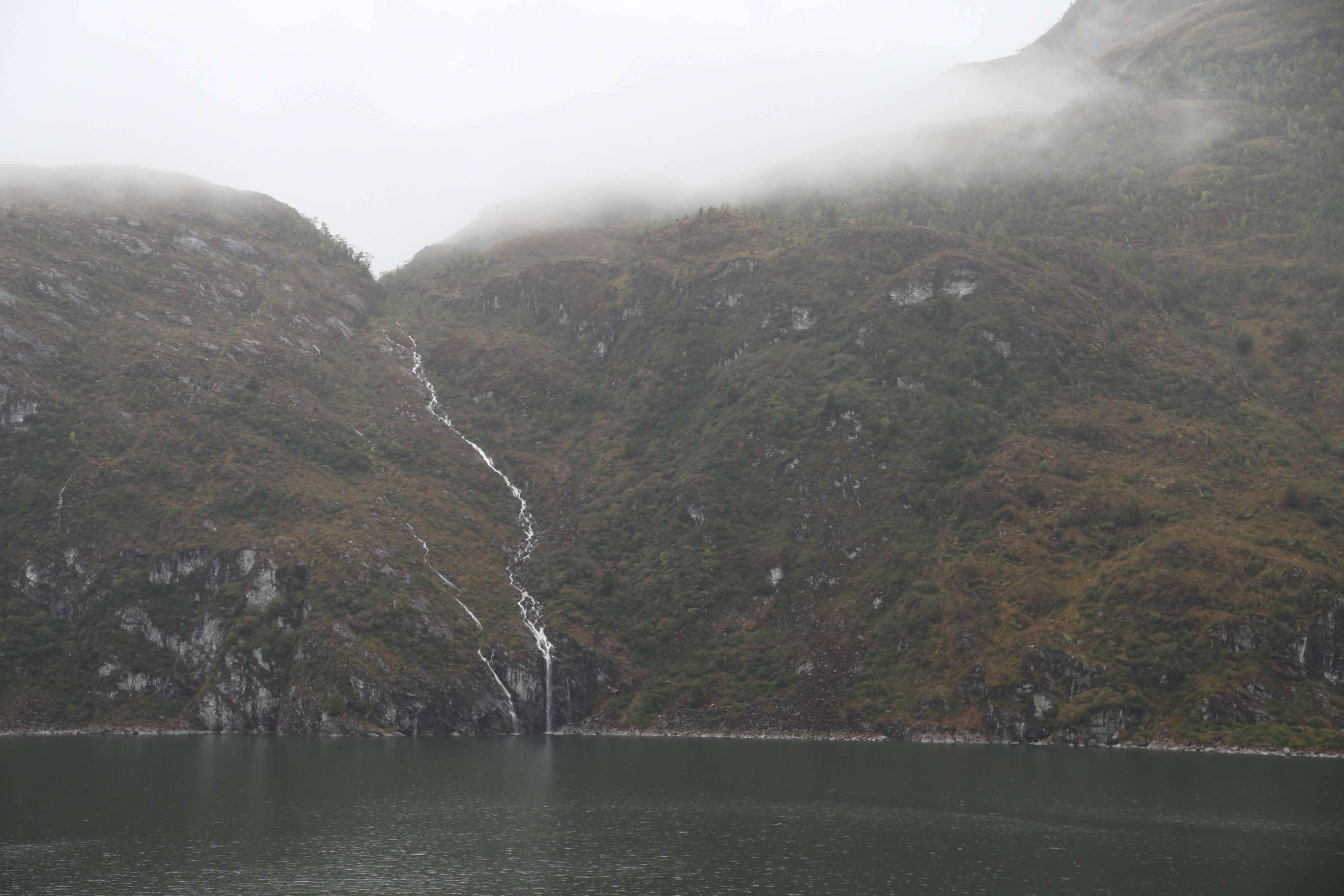 Frigid melt water from a glacier behind the clouds spills into the channel. 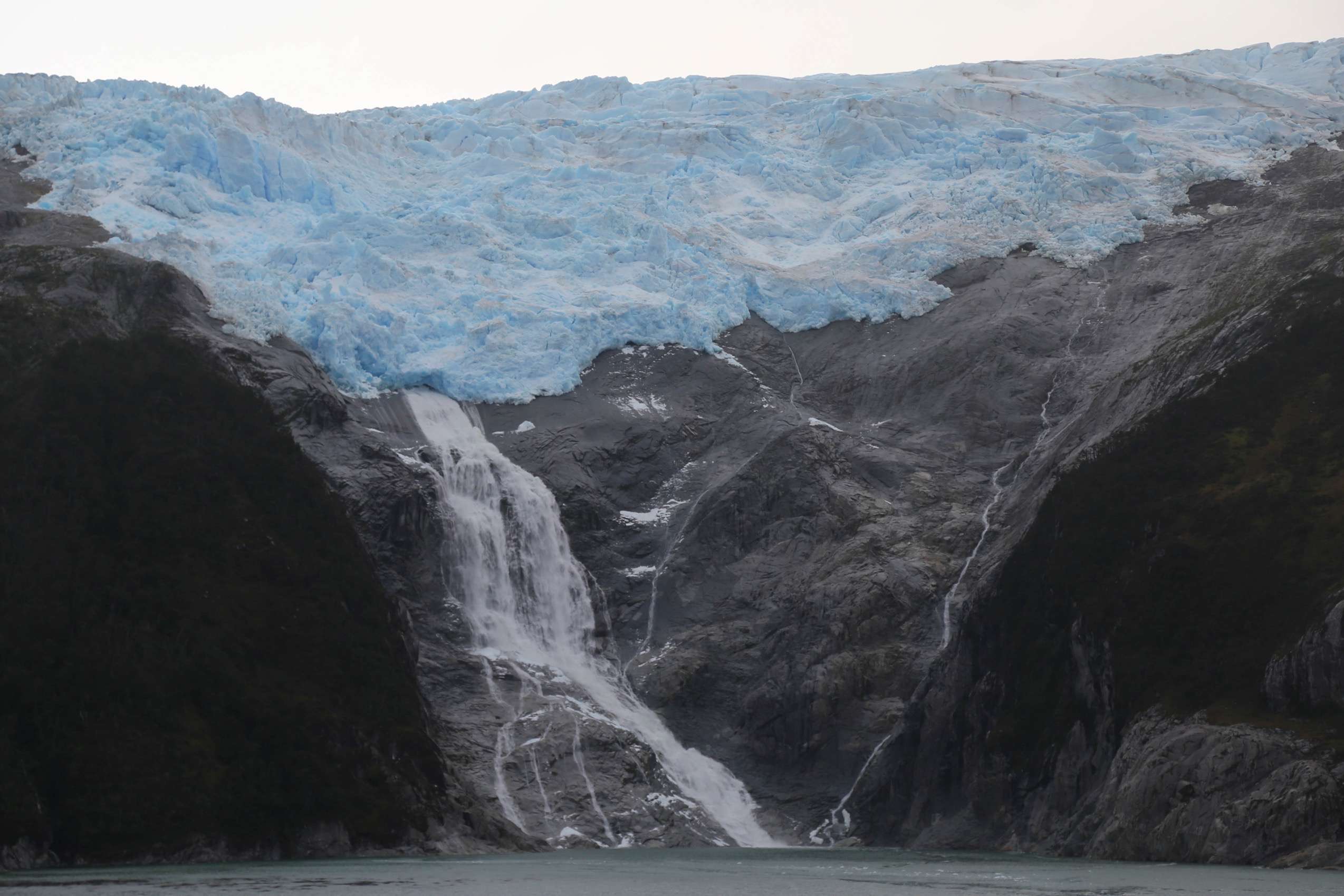 Climate change reveals itself by the amount of melt water from the glacier as well as how far the glacier retreated from its previous location. 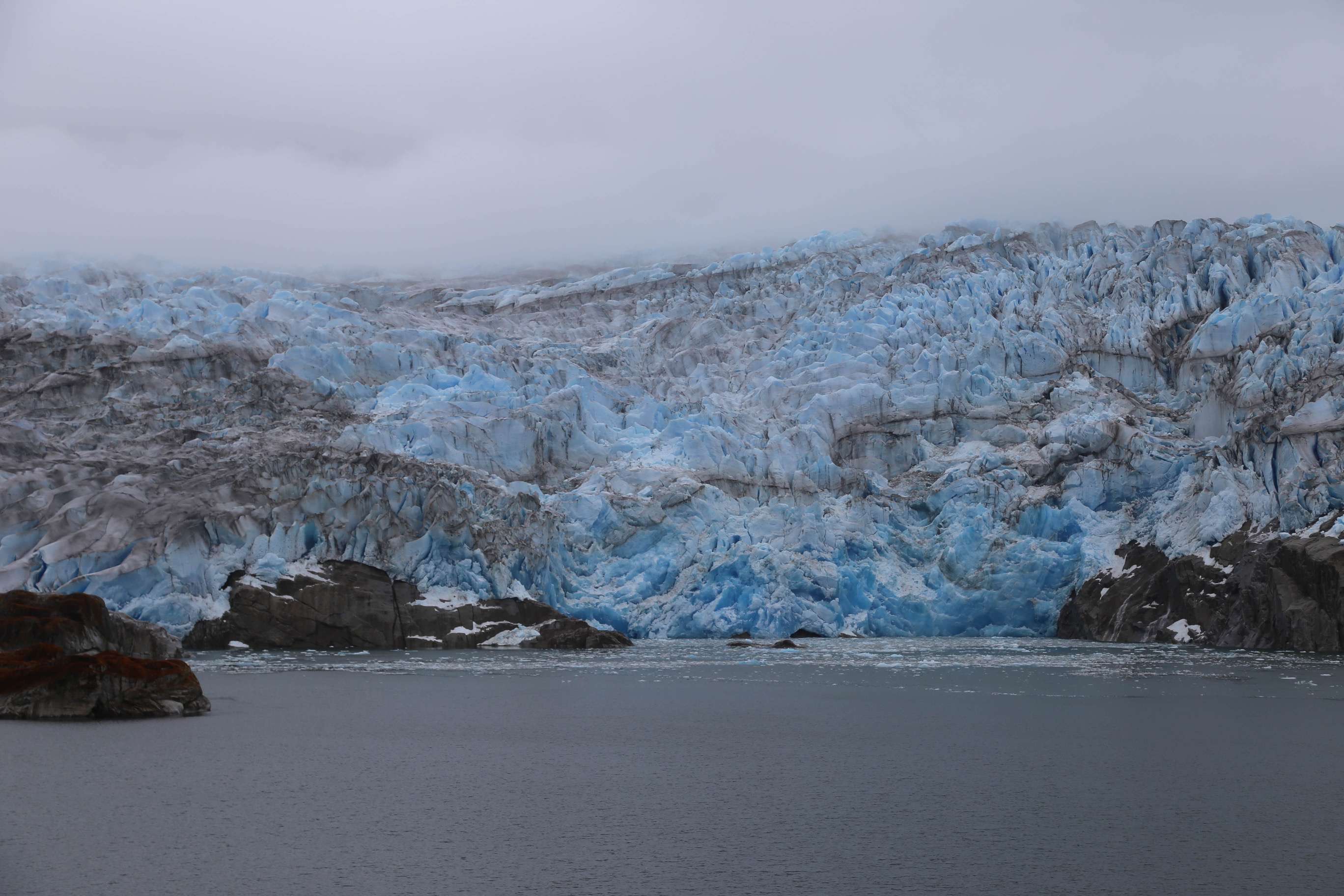 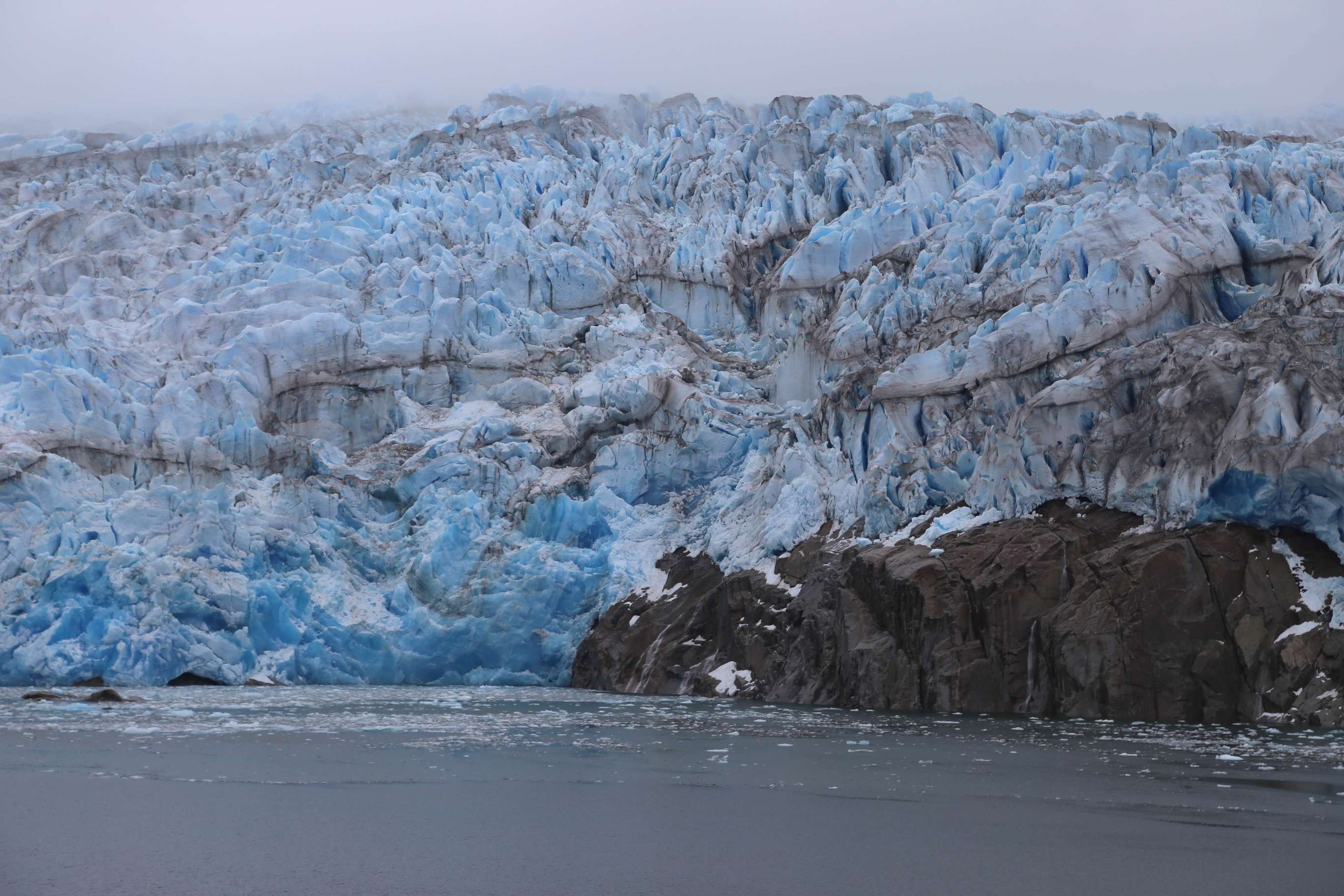 …beauty, and the wonder of nature… 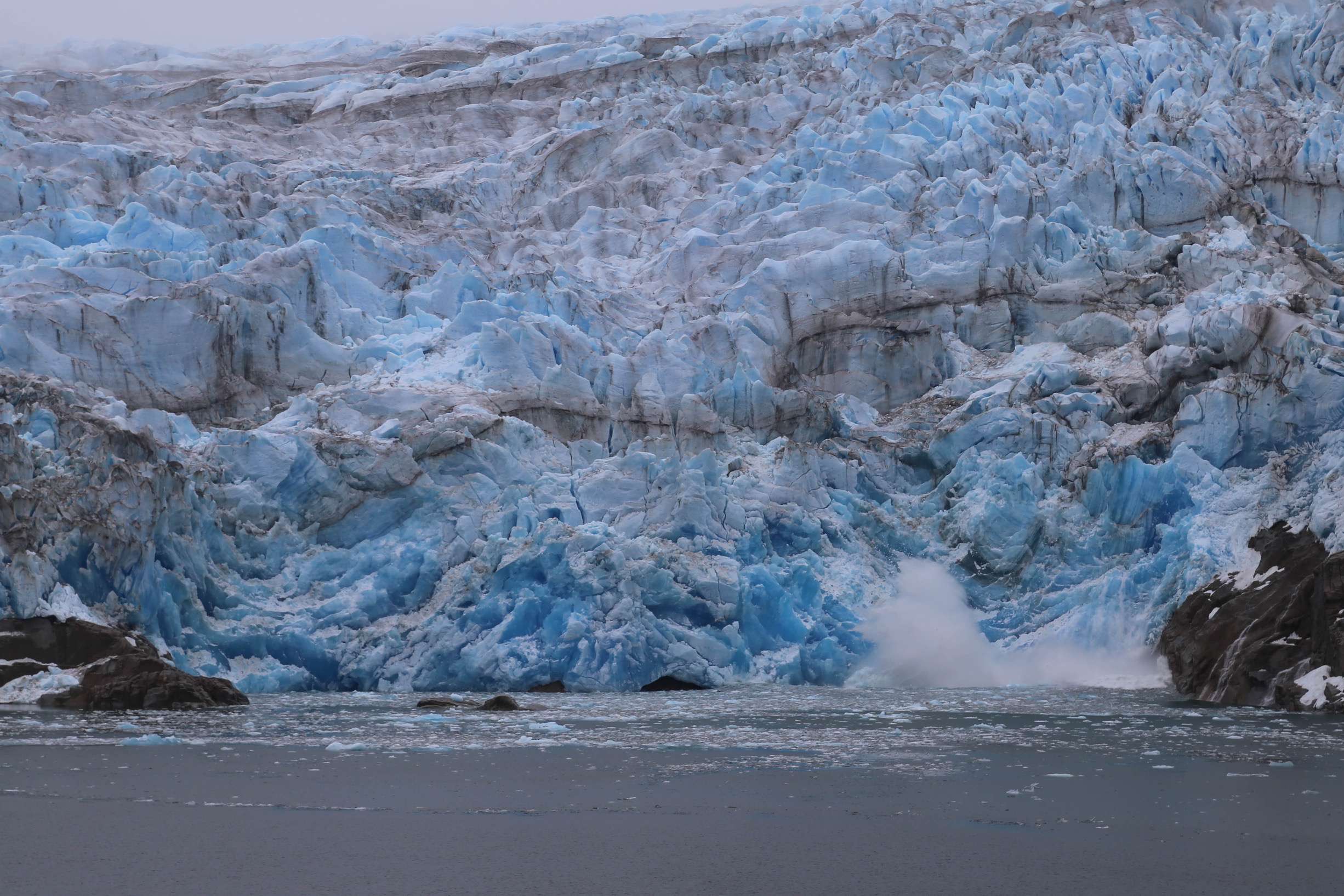 …when one watches the ever-so-slight movement of a small piece of glacier as it splashes into the sea, lower right.

Most travelers spend their time looking at the wonders of nature, rather than wondering how such an incredible spectacle came to be. And in this sense, there is plenty to behold. Chile is home to more than 2,300 islands, islets, reefs, coral reefs and cays. Sailing a ship between those formations takes you along some of the most famous sea routes in the world. An error in navigation or judgment can leave a ship forever crashed upon rocky shoals. 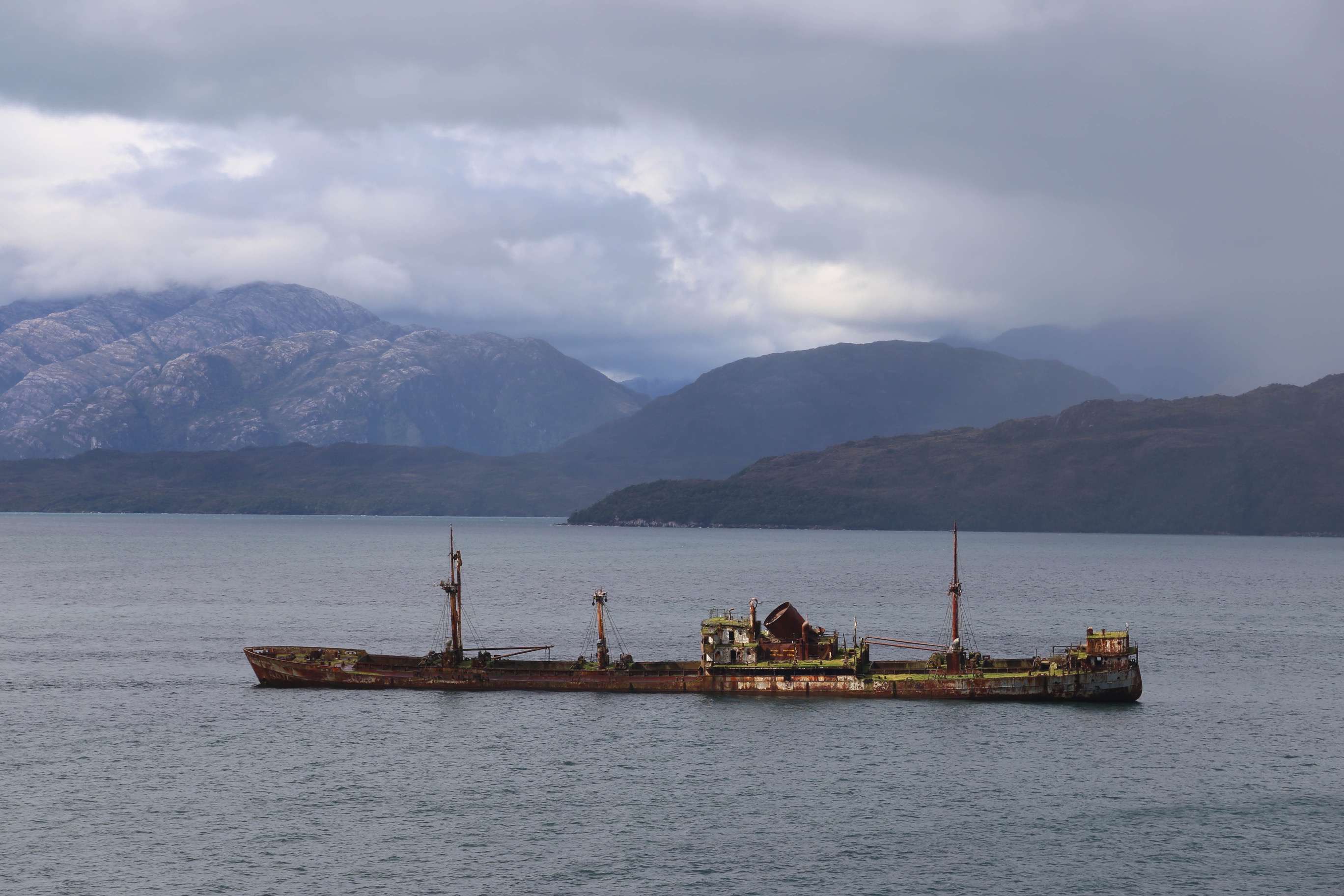 Marine Vessel Logos ran aground in 1988 and is a reminder of danger a wayward ship can encounter among the fjords and islands of southern Chile. 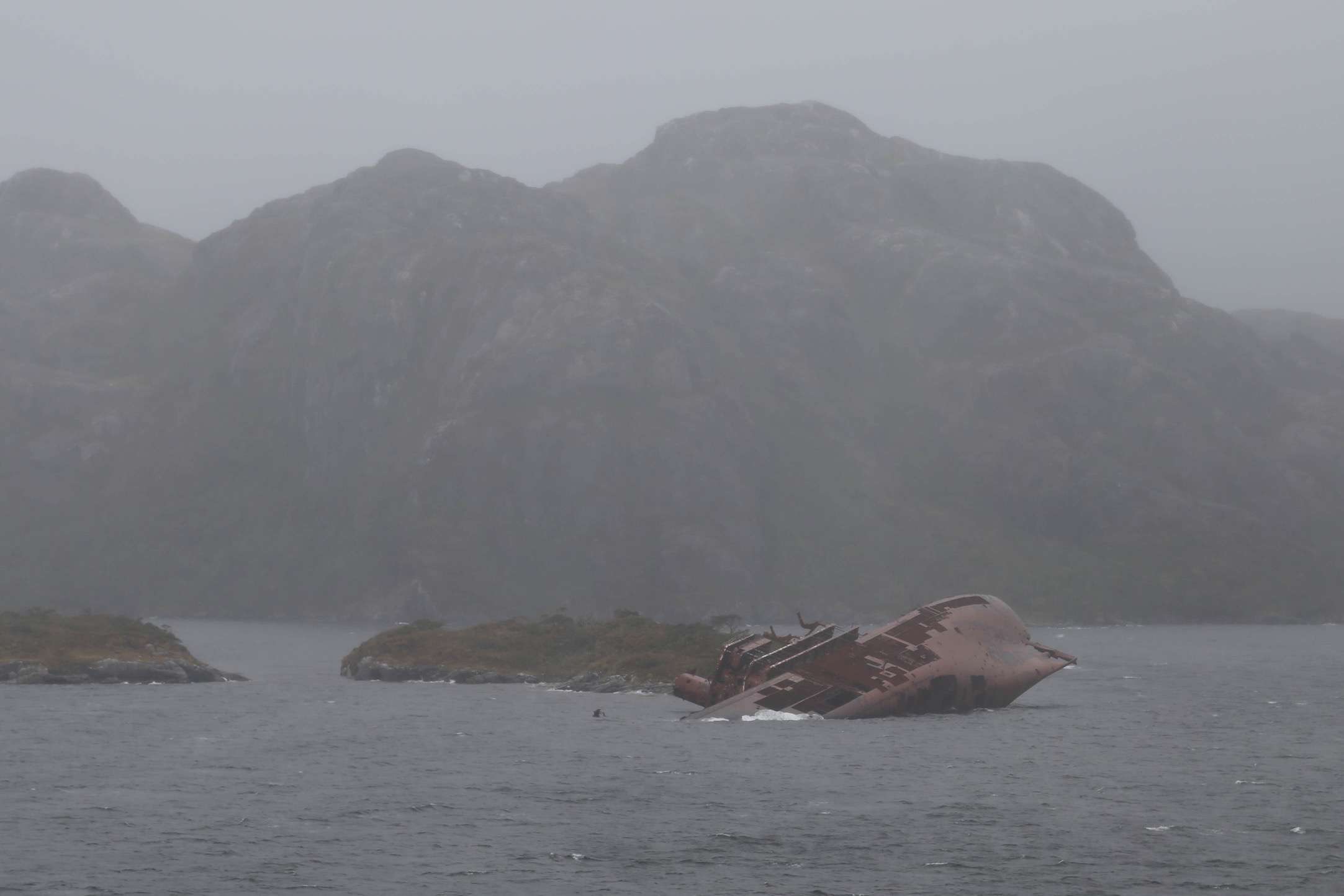 The USS Riverside ferried WWII soldiers around the Pacific. She was later sold and renamed several times. In 1966, rechristened SS Santa Leonore, she wrecked on March 31, 1968 off Isabel Island in Smyth Channel where she serves as a reminder of the dangers of Chile’s southern coast.

The Age of Discovery was both a golden era of exploration as well as a time of great exploitation of land, people and resources. Beginning in the late 1400s and continuing through the 1700s, European nations explored the planet and her oceans, and they mapped land masses and sea routes in a quest to claim as much land – and riches – as they could lay their hands on. Spain, Portugal, England, France, Holland and other countries set forth in a feverish competition. An insatiable thirst for gold fed much of their collective fevers. 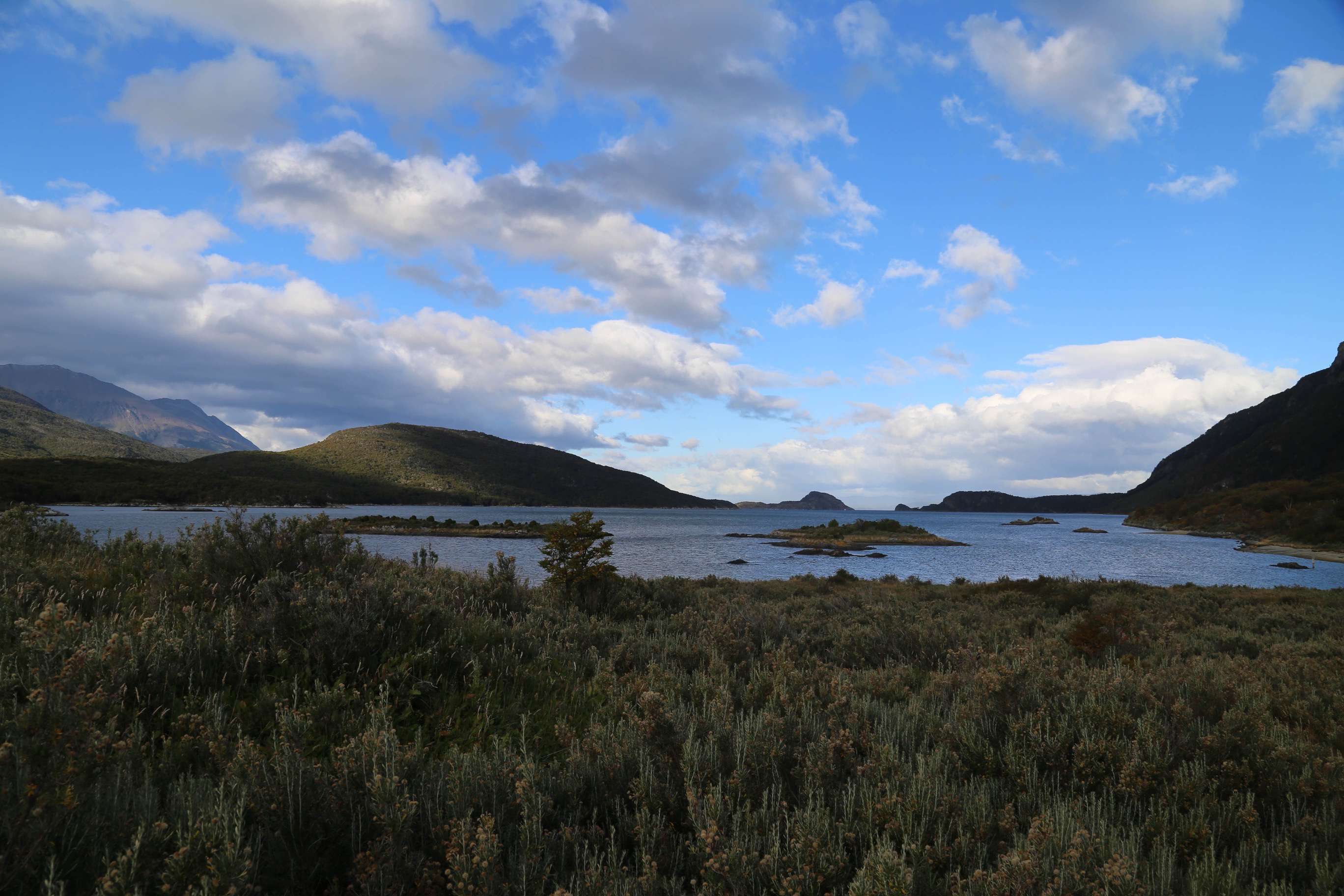 On sunny days the skies of the extreme latitudes have an added brilliance of blue.

For the explorers, getting to the west coast of South America had been a particular challenge. Land crossings through dense jungles were hazardous and a southern sea route forced ships into perilous waters whipped by fierce winds, massive tides and terrifying storms. Only the most determined explorers pressed on. These days, most “sailors” do their exploring aboard the comfort of a cruise ship, where modern technology keeps passengers and crew safe. But the Age of Discovery was often a life or death venture. 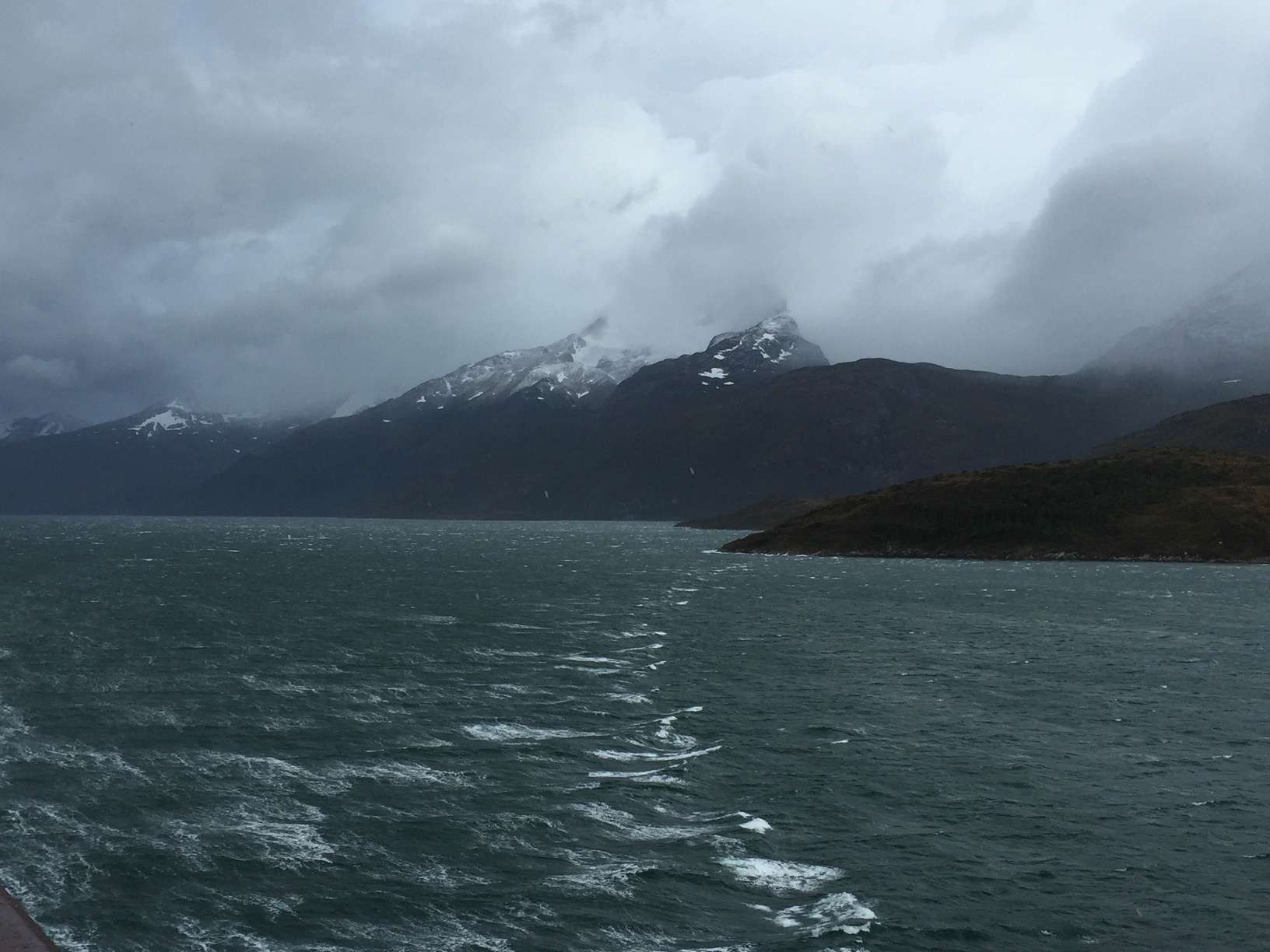 When Ferdinand Magellan sailed these waters in 1520, it was uncharted territory.

Portuguese explorer Ferdinand Magellan found a way through in 1520 during his daring circumnavigation of the world. His route of approximately 400 nautical miles (one mile equals 1.15 nautical miles) threaded through narrow passages, islands and islets, unpredictable seas and in an area where storms rose up with little or no warning. For European explorers, Magellan’s feat opened the western parts of South America, North America, as well as the whole of the Pacific Ocean, quickening the pace of conquest. 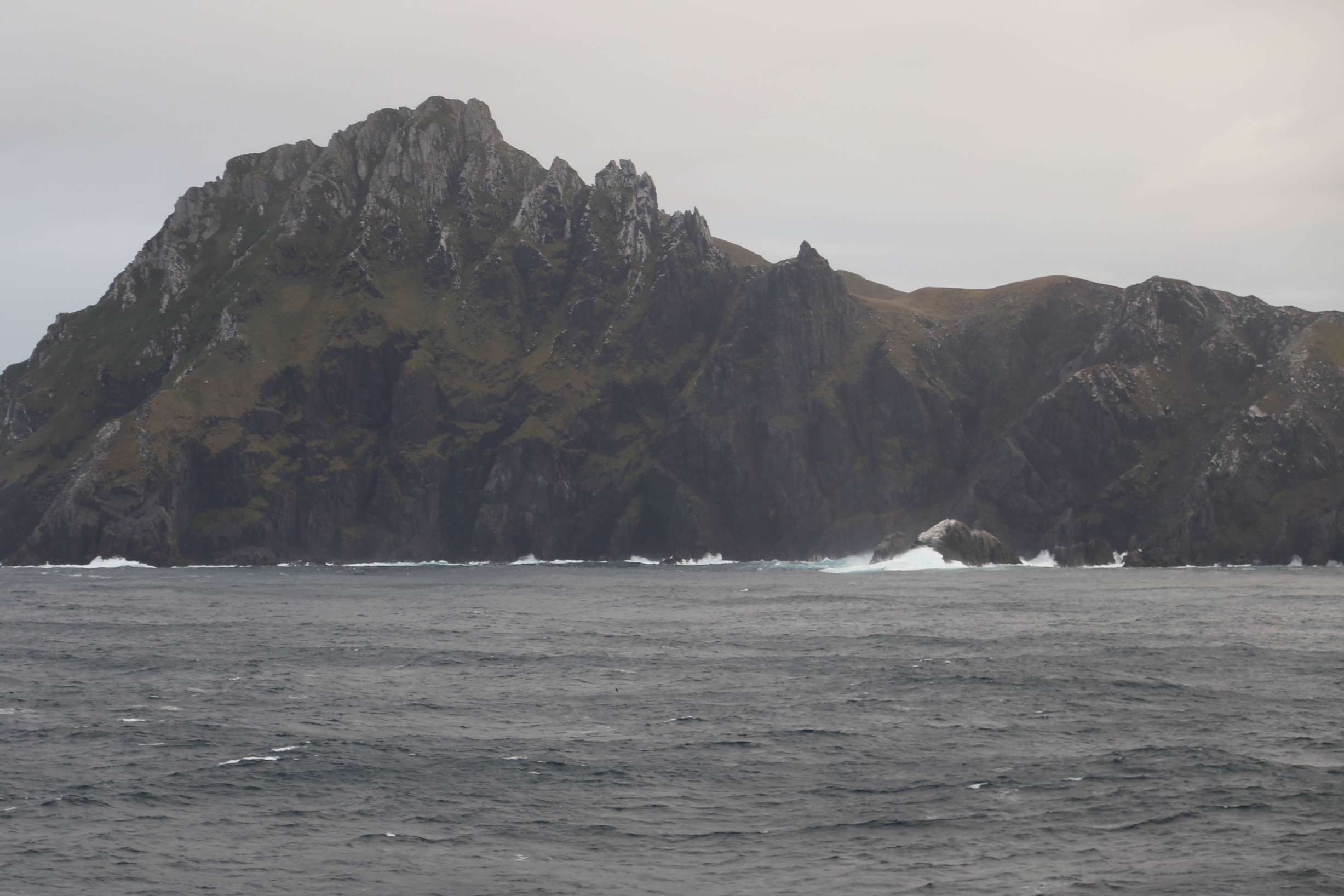 This is a very calm day near Cape Horn, where the seas can often be a churn of frigid waters and freezing gale force winds. 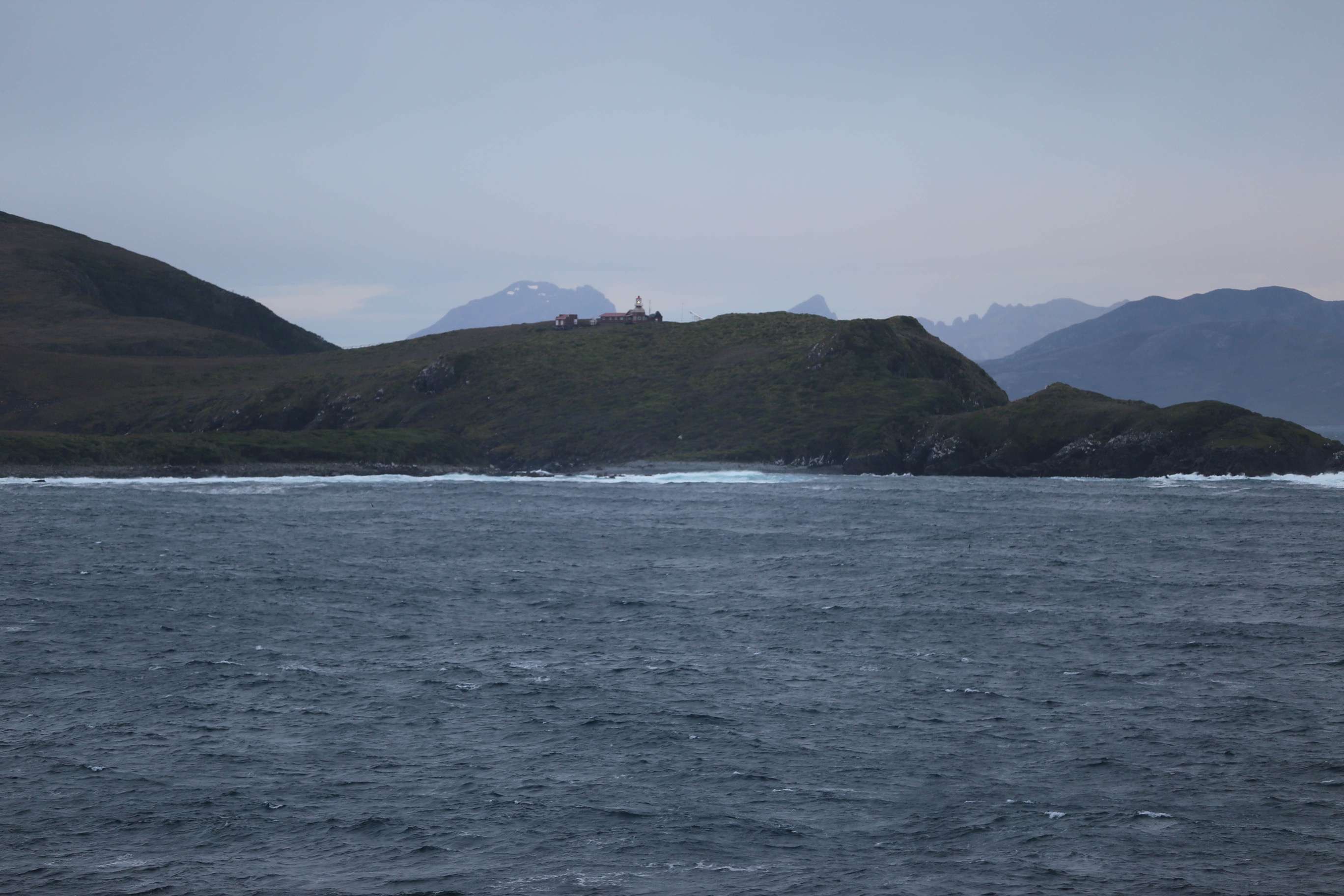 The Chilean Navy maintains a station at this southernmost point of South America.

As early as 1525 other sailors had gone completely around the tip of South America and in 1616 Dutch explorer Willem Schoutem sailed between South America and Antarctica along a route that is now known as Drake Passage. Cape Horn is named after the Dutch city of Hoorn. The deadly seas and roaring winds are too much for anyone but the most daring sailor and are some of the fiercest on the planet, where rogue waves can top out at nearly 100 feet. Cape Horn is the northern boundary of Drake Passage. For seafarers, transiting Drake Passage is the oceangoing equivalent of a mountaineer scaling Mt. Everest. 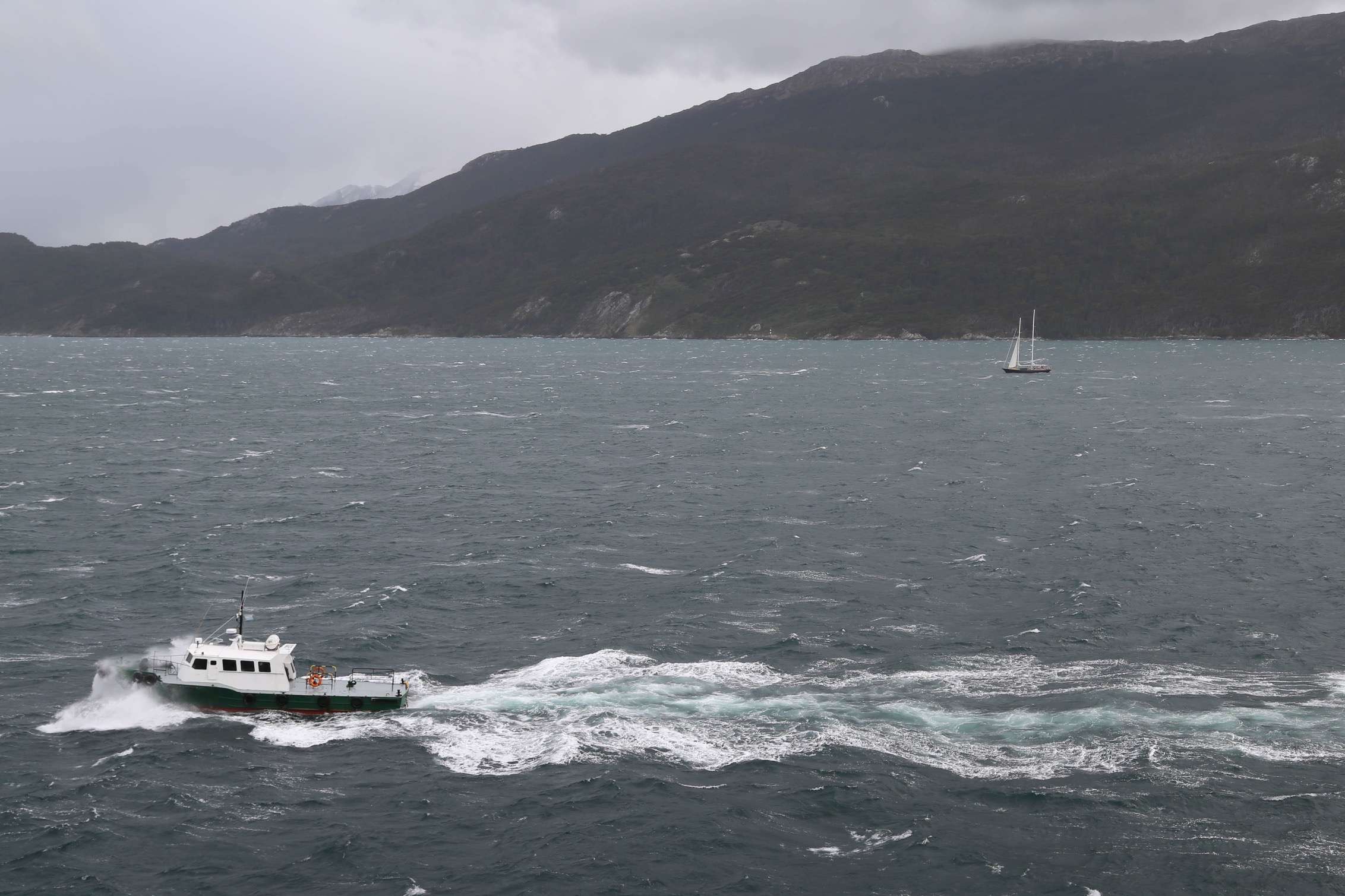 A power boat plows through choppy seas while the sailboat in the background hews closer to the shoreline.

Even from the comfort and safety of a cruise ship, a trip such as this is still an adventure. A journey down Chile’s southern coast and passage around Cape Horn offers a glimpse of incredible lands that are a part of what makes Chile such an enticing place to visit. 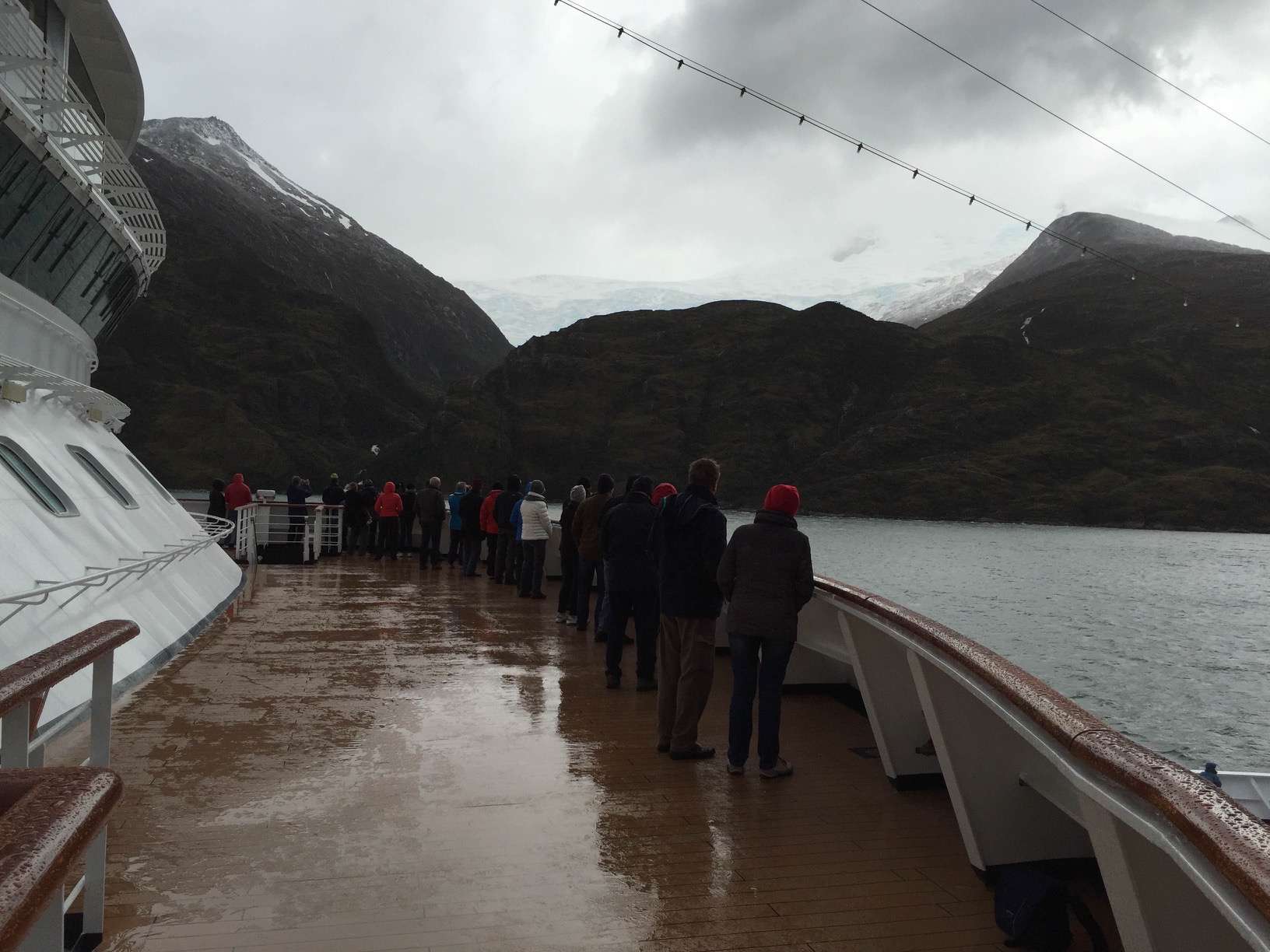 Passengers aboard a cruise ship gaze in wonder at the beauty of Chile’s southern lands. 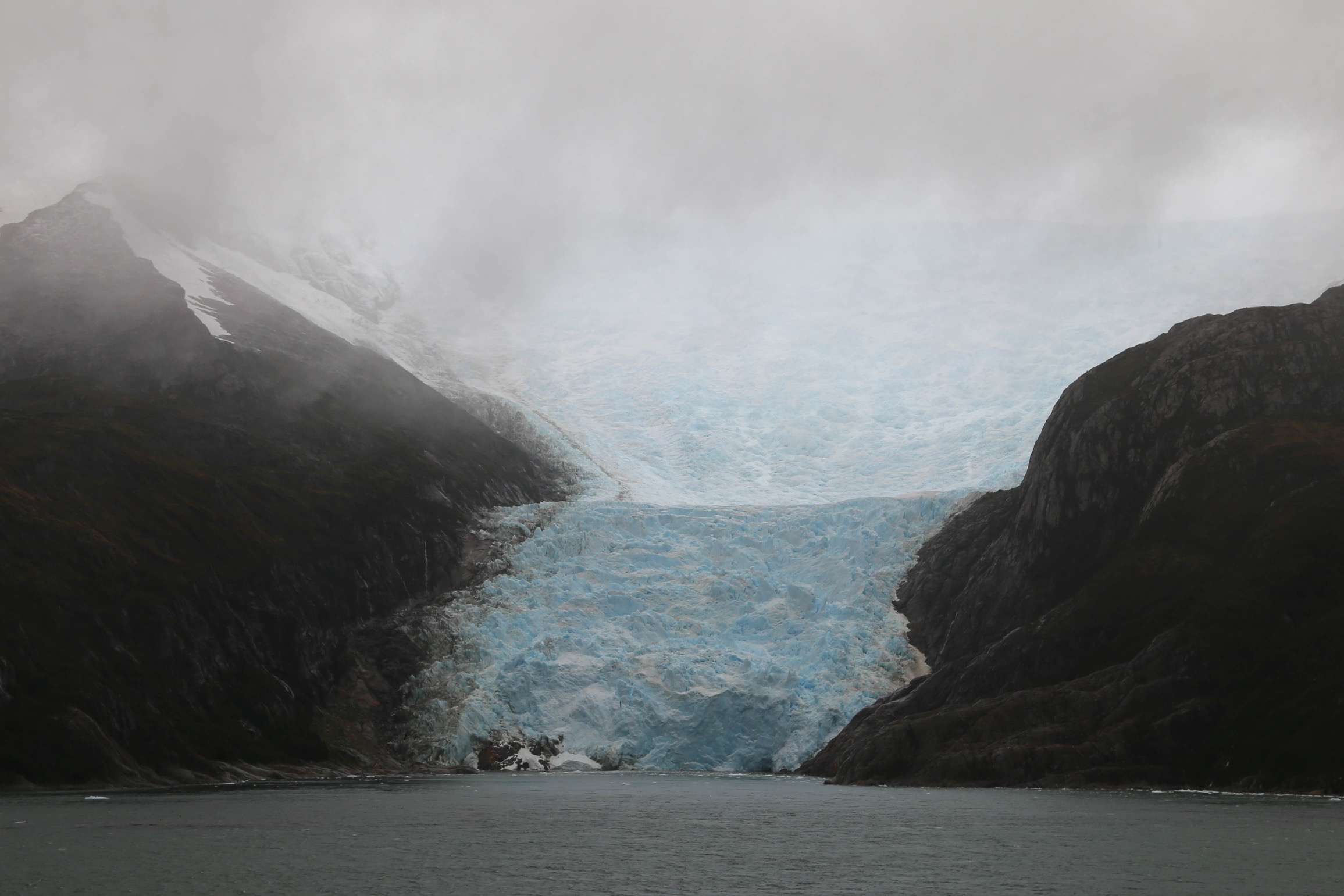 A glacier grinds its way to the sea, gouging away the rock beneath it.

For more information about southern Chile, click to these websites: