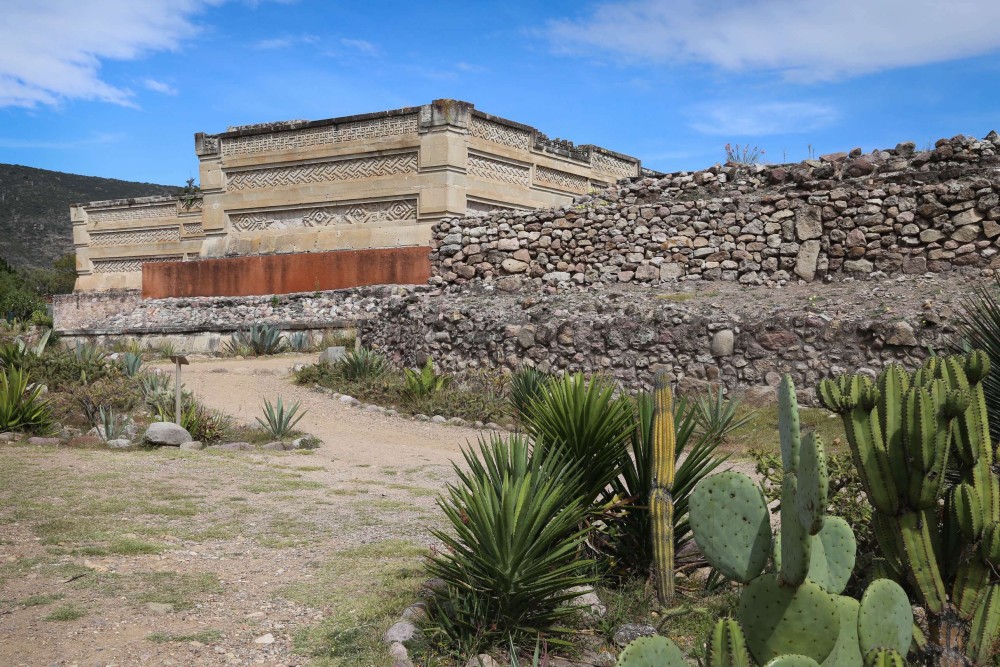 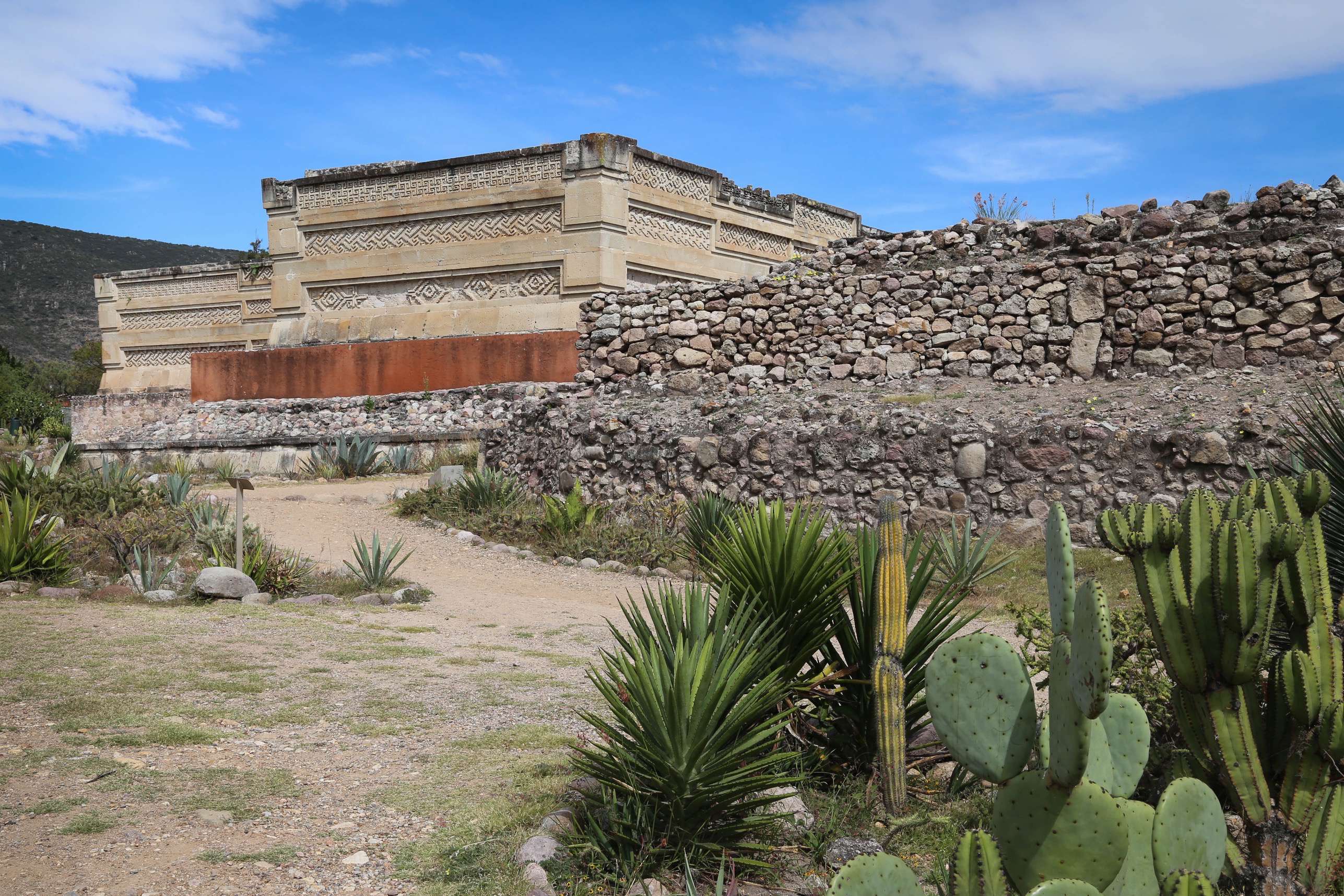 Mitla is the most important religious temple complex for the ancient Zapotecs of Oaxaca, Mexico. Among its distinctive features are fretwork carvings that adorn the walls of the buildings in the complex.

What makes Mitla an important archaeological site is not its size or the number of people who lived there, but because it was the main religious center for the Zapotecs who built it and also because of the fretwork of geometric patterns carved into the stone walls of the buildings that are found nowhere else in Mexico. 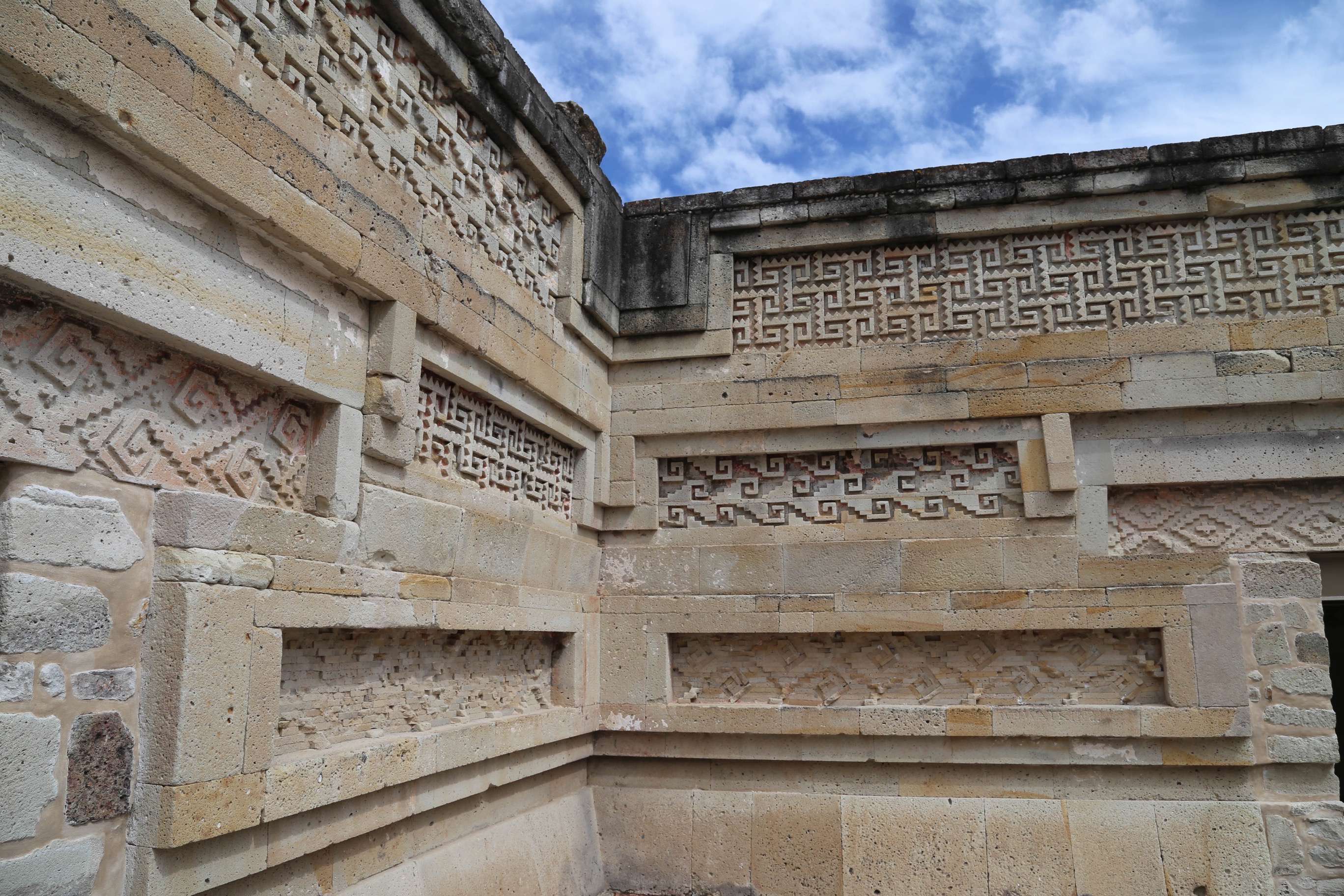 Visitors leave Mitla and go directly to one of the weavers’ villages, such as Teotiltlan de Valle, and see these same patterns woven into the rugs.

Oaxaca, Mexico, for all its beauty, is a somewhat out-of-the-way locale. But for Zapotecs, who began their ascendance some 2,500 years ago, the Central Valleys of Oaxaca were an ideal place to call home. Unlike some of the better-known civilizations in Mexico, Central and South America, Zapotecs were not as concerned with making war as they were with making deals – as in trade – a tradition that continues to this day. 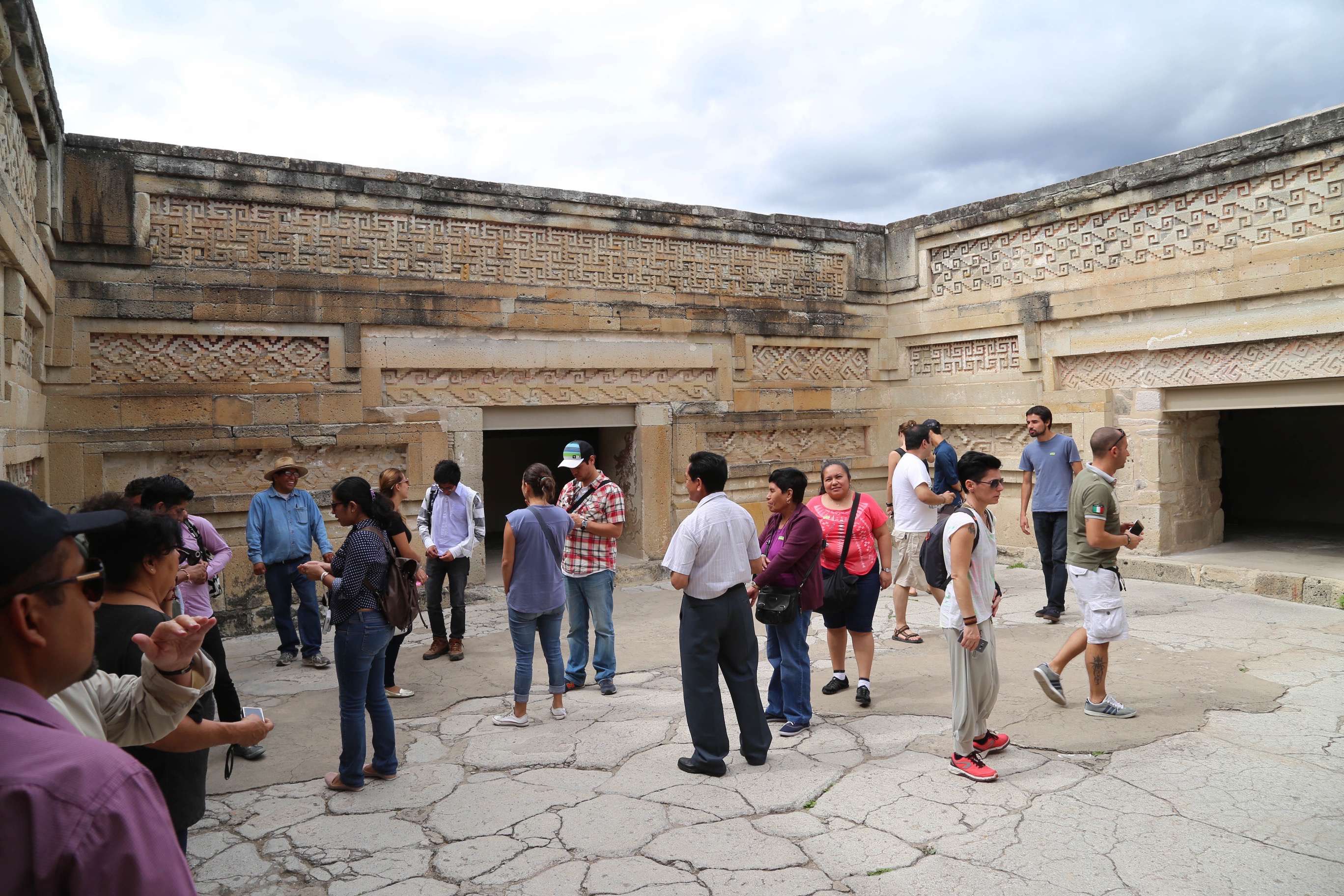 This group, in the courtyard atop one of the buildings at Mitla, is small compared to the crowds at many of the archaeological sites in Mexico.

And the business of trade was good. At the height of the civilization as many as a half-million Zapotecs lived in the Oaxaca region, until Spanish Conquistadors arrived in the 1520s lusting for gold while spouting a canard about saving souls. The town of Mitla, when the Spanish arrived, was two-thirds of a mile long, strung along the small river, also named Mitla. 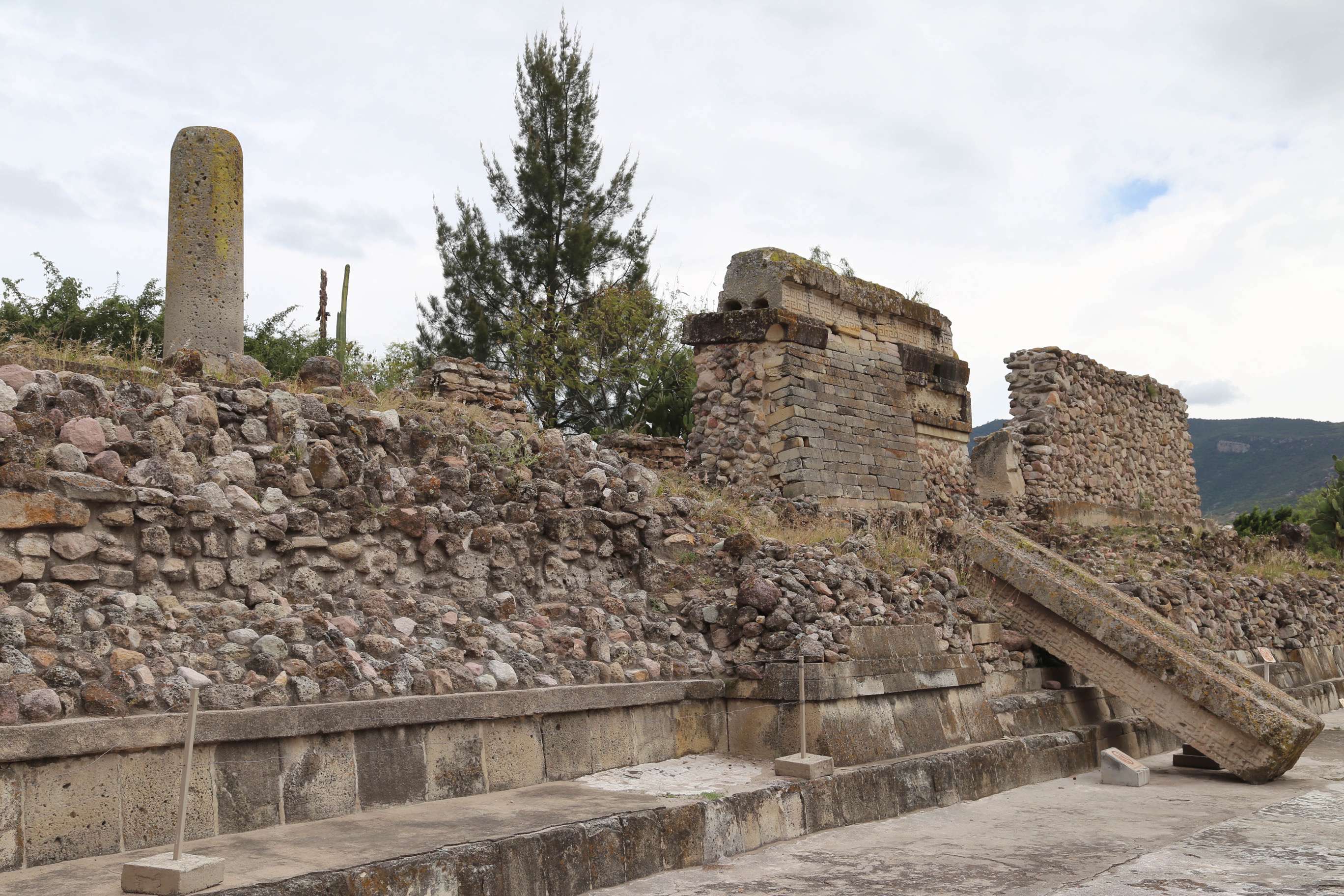 The construction of Mitla consisted of smooth stone walls on either side with fill in between. Many of the stones from Mitla were taken by the Spanish to build the Catholic church nearby.

The temple site is distinguished in several ways. Instead of a location on a high point, closer to the heavens, Mitla was constructed on a valley floor. And Mitla was a showcase in Zapotec religious thinking. Like many Mesoamerican cultures, Zapotecs were polytheistic. It may have been because Zapotecs were traders and not warriors that the notion of syncretism revealed itself in Mitla. Syncretism combines different elements, either as a way of acceptance, or evolution in thinking. Ironically, syncretism also shows up in many of the Roman Catholic churches in post-Columbian America, where church carvings and paintings show both European religious elements and also the indigenous beliefs of death, spirits and the workings of the universe. 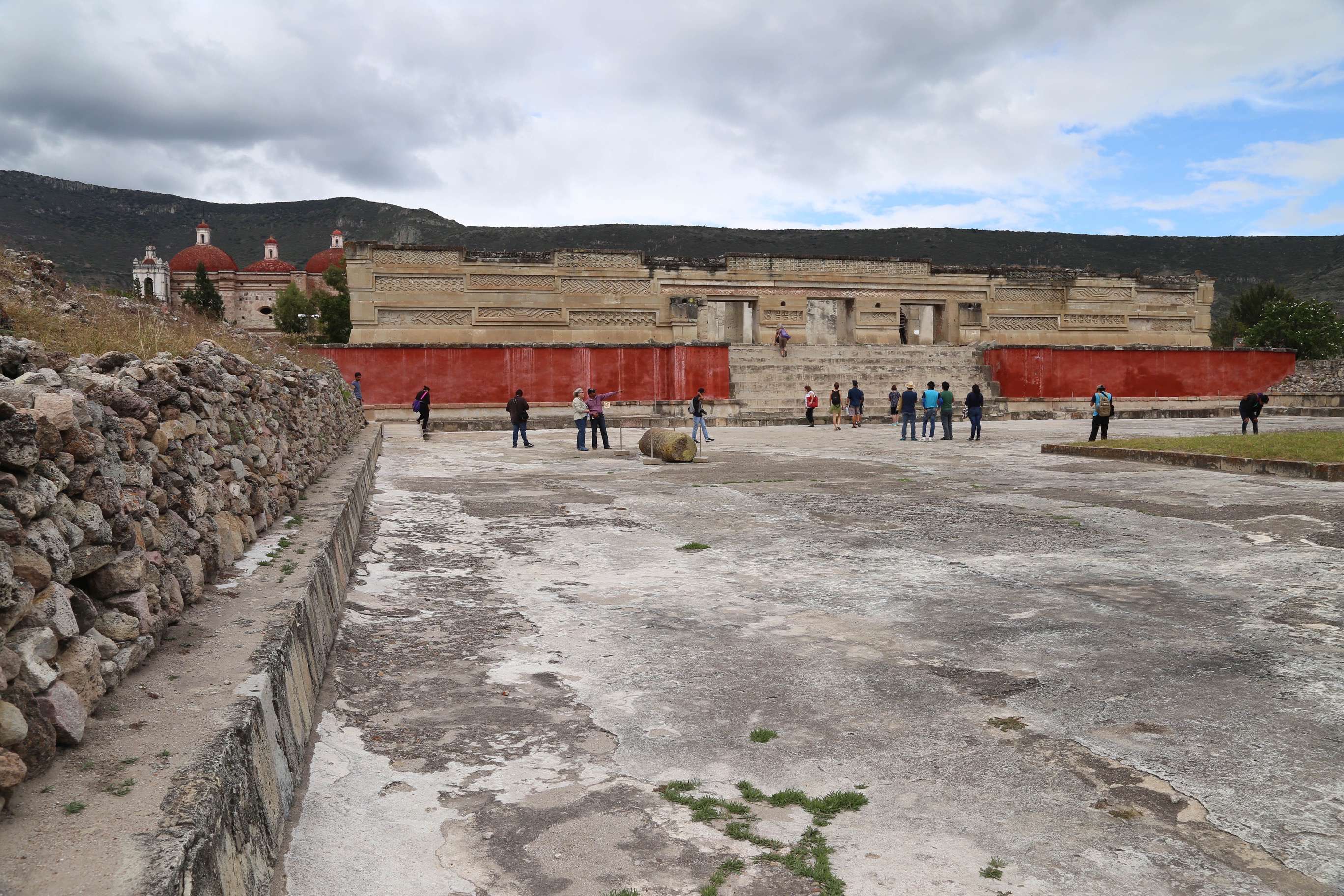 With the Spanish colonial church in the background, left, visitors roam the main courtyard as they take in the ruins of Mitla.

Because of its location in a valley, Mitla does not have broad avenues that are common at other Mexico temples like Monte Alban, Teotihuacan, Tulum or Chichén Itza. It was a place built for comfort and religious ceremonies rather than grandeur. And it is important to note that Mitla served as the religious center for the Zapotecs who prospered in Oaxaca until the arrival of Spanish Conquistadors. 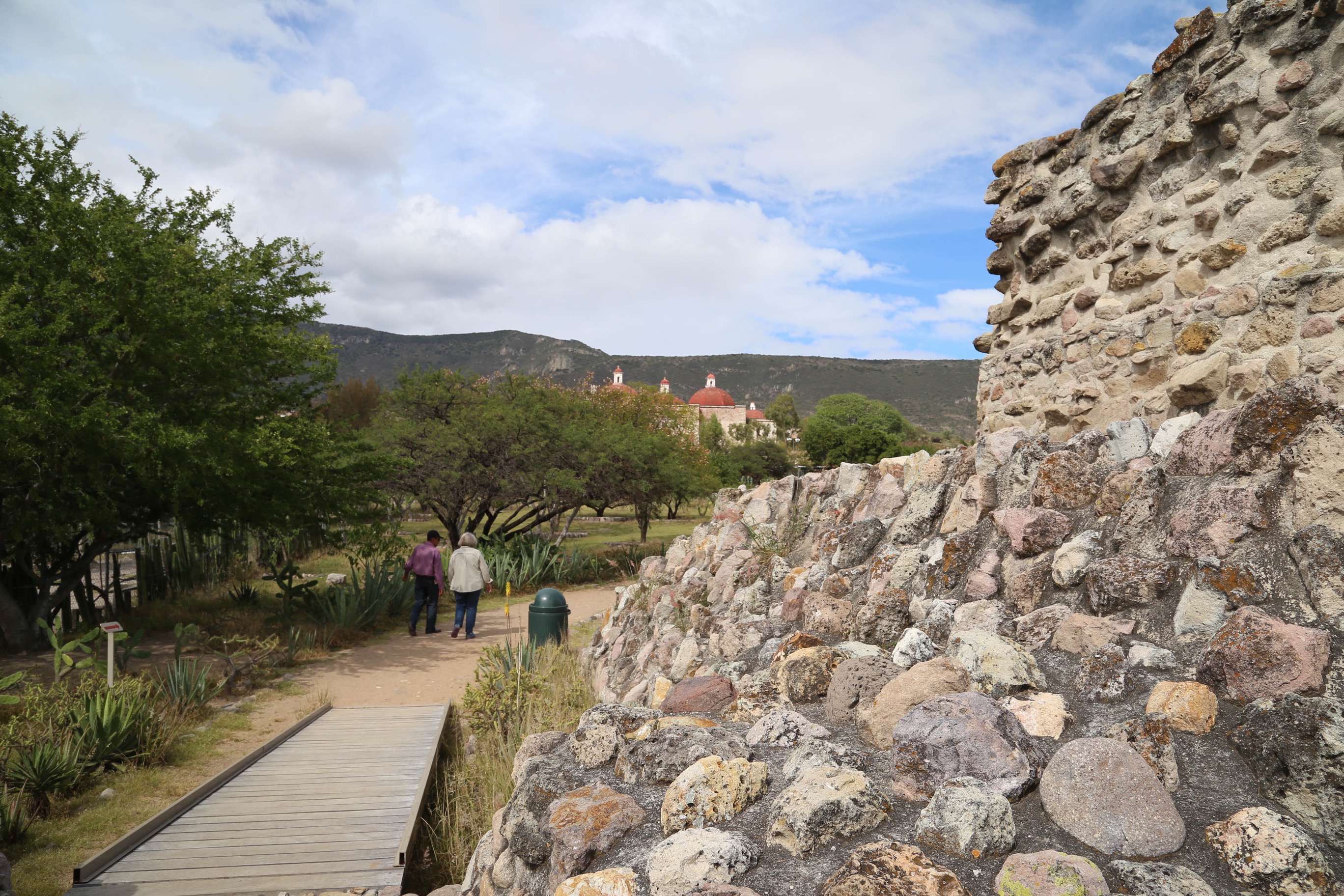 The San Pablo Apostol Catholic church, background, is built in large part with the stones taken by Spanish colonists from the temples at Mitla.

In addition to being a place of worship where elites and priests lived, Mitla was also a place that focused on death and the afterlife. In the Zapotec language of Nahuatl, Mitla means, “Place of the Dead” and it is believed by the Zapotecs that the souls of the dead reside in Mitla. 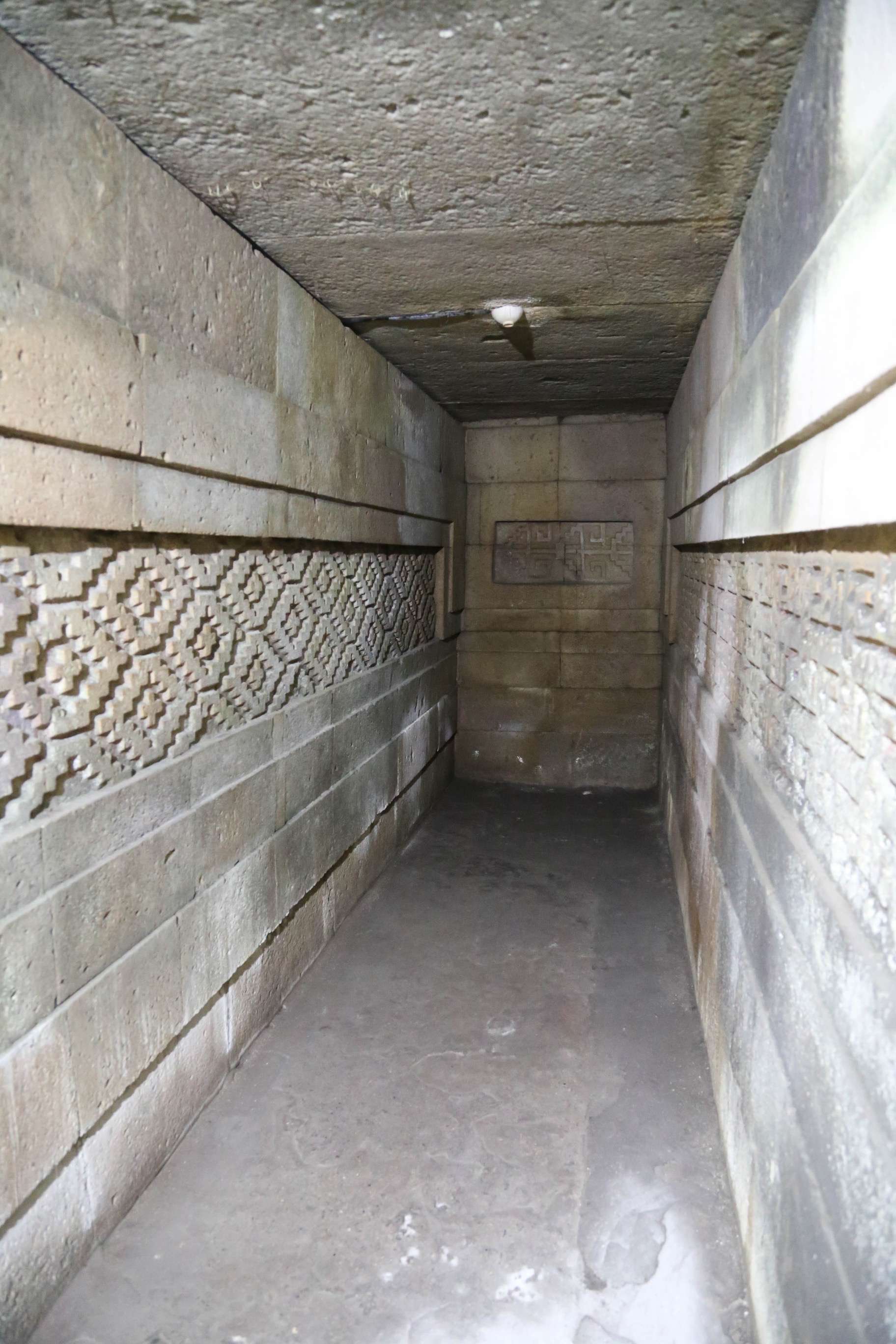 Intricate fretwork carved directly into the stone, as in this burial chamber, are found nowhere else in Mexico’s may ancient temples.

The pattern of fretwork stone carvings found throughout the complex includes 14 different geometric patterns. Many of these same patterns are also expressed in the rugs and other woven products produced by Zapotecs living in villages in Oaxaca, where trade goods are still bought and sold, in places like Teotitlan de Valle. 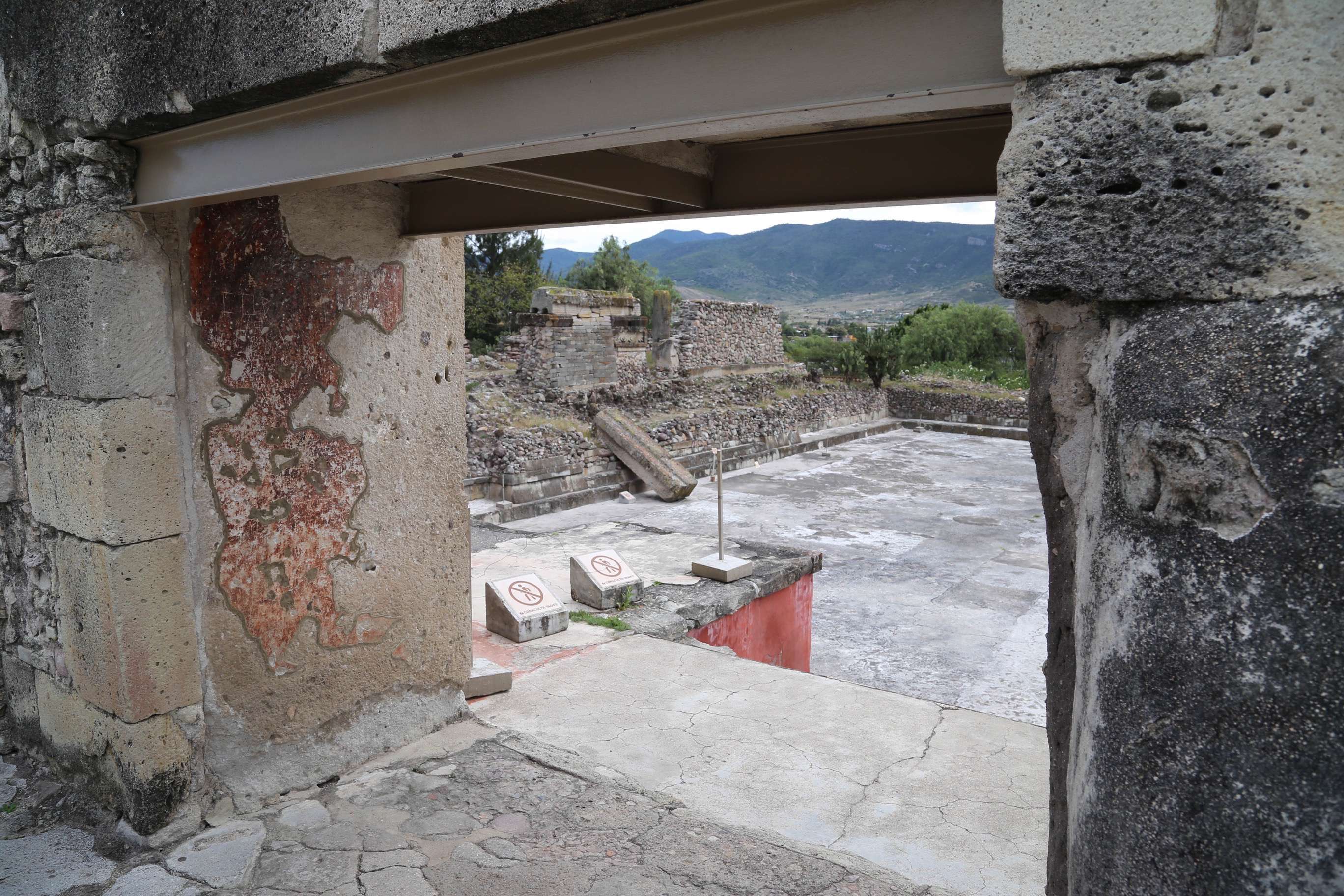 A view from atop one of the temple buildings at Mitla looking out to the main ceremonial plaza, below.

Another distinguishing feature at Mitla are the stone columns, carved out of volcanic tuff, and the finest examples of their kind in Mesoamerica. The columns served at least two purposes. One was to support the roof of large rooms and the other was as an indicator of life expectancy. It is thought that when a person wrapped their arms around the pillars, if they felt the column move, then their life would end soon. 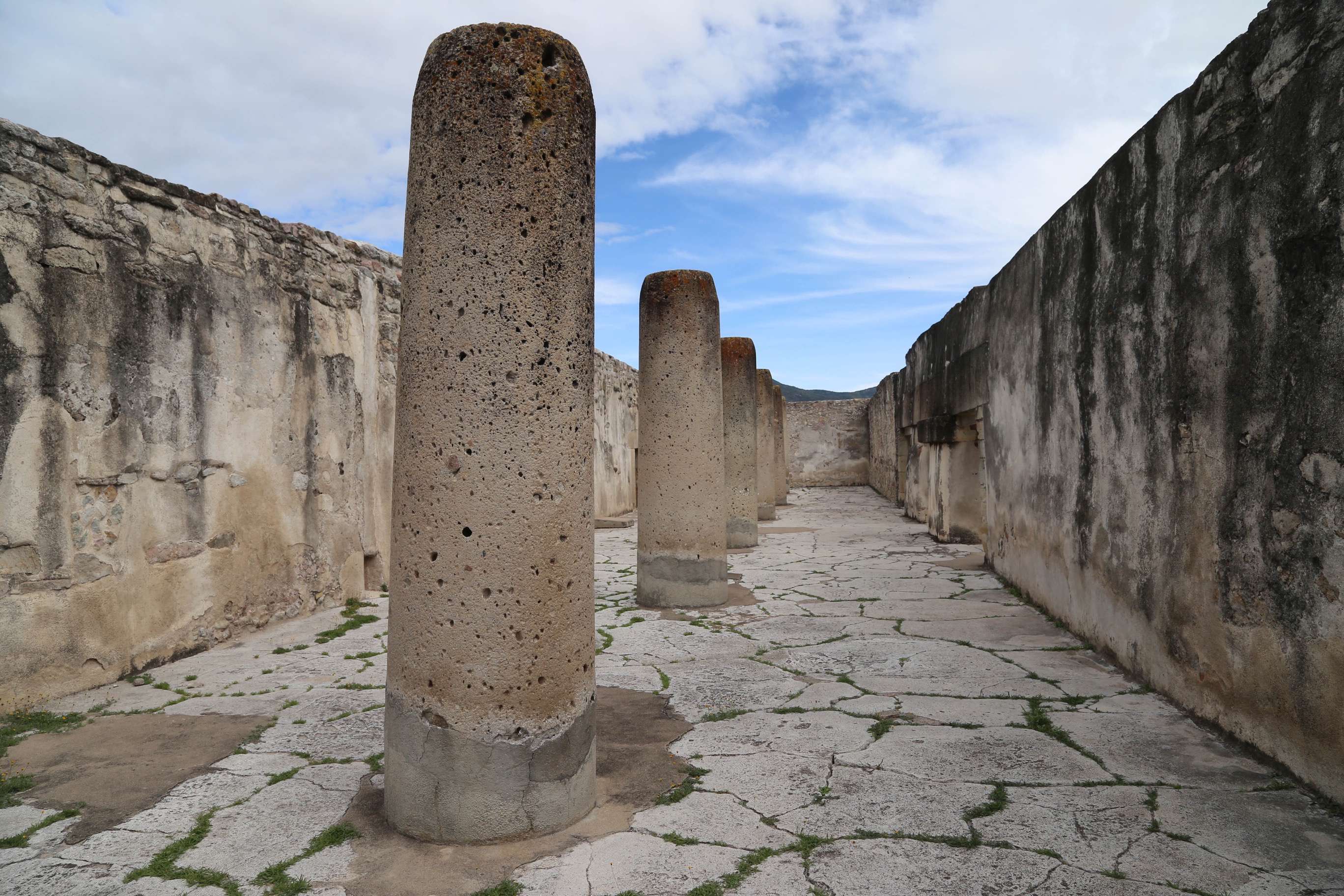 These stone pillars supported the roof and are carved out of volocanic tuff.  They are the finest examples of their kind in Mexico. 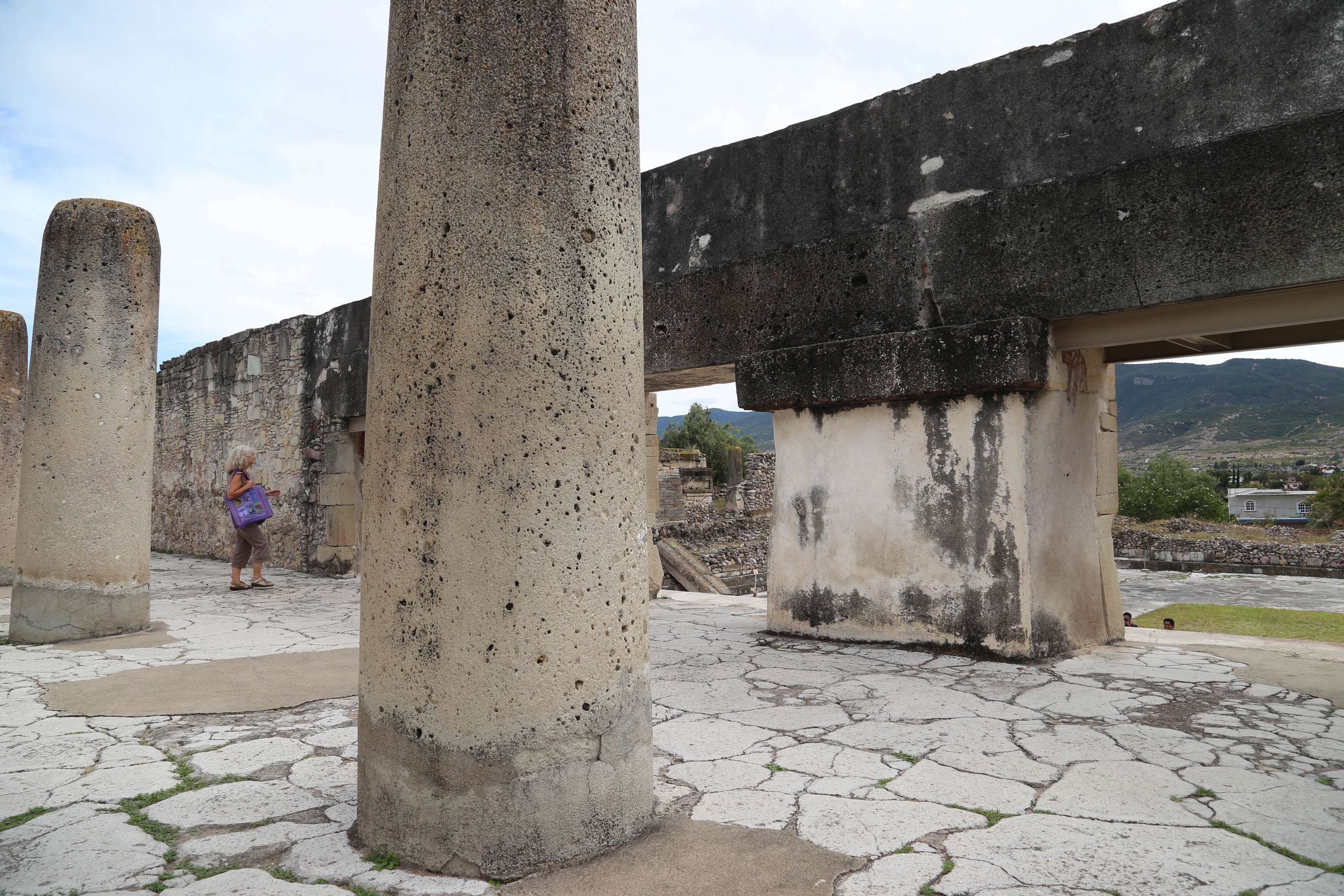 Legend has it that a person would wrap their arms around a pillar and if they felt it move, their life would soon be over.

Mitla differs from many other archeological sites because it is located within a current-day community. San Pablo Villa de Mitla, a town over just over 11,000 people has been built up, often atop of existing structures and elements of the Mitla temple, remnants of which are visible in parts of the town. 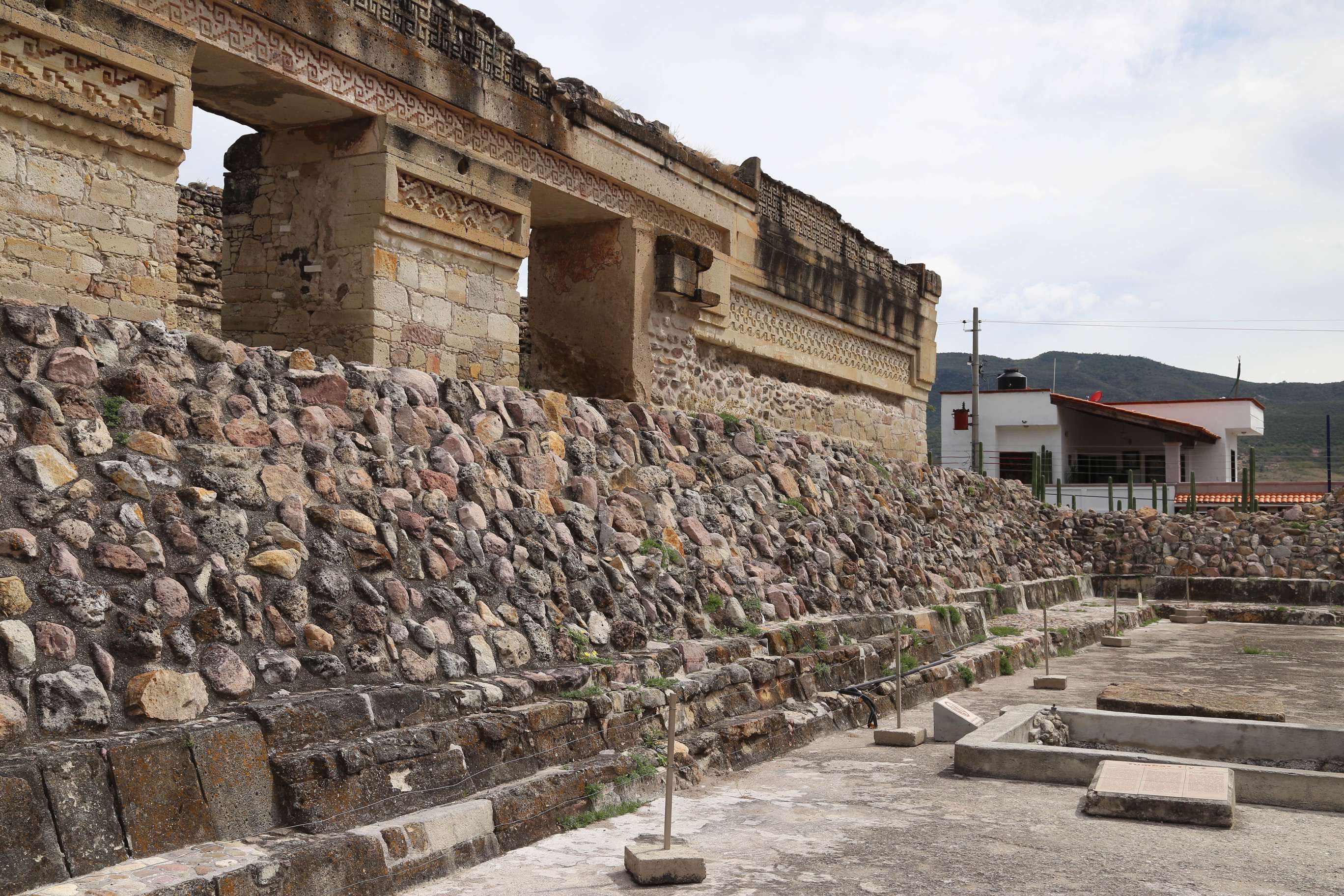 The entryway, lower right, is to the burial chamber where the dead were laid to rest. Some current-day residents live next to the ancient temple.

And a visit to Mitla offers visitors an advantage over other archeological sites in Mexico – lack of crowds. The out-of-the-way location as well as being the lesser known of Oaxaca’s major temples means only about 500 people per day visit there. 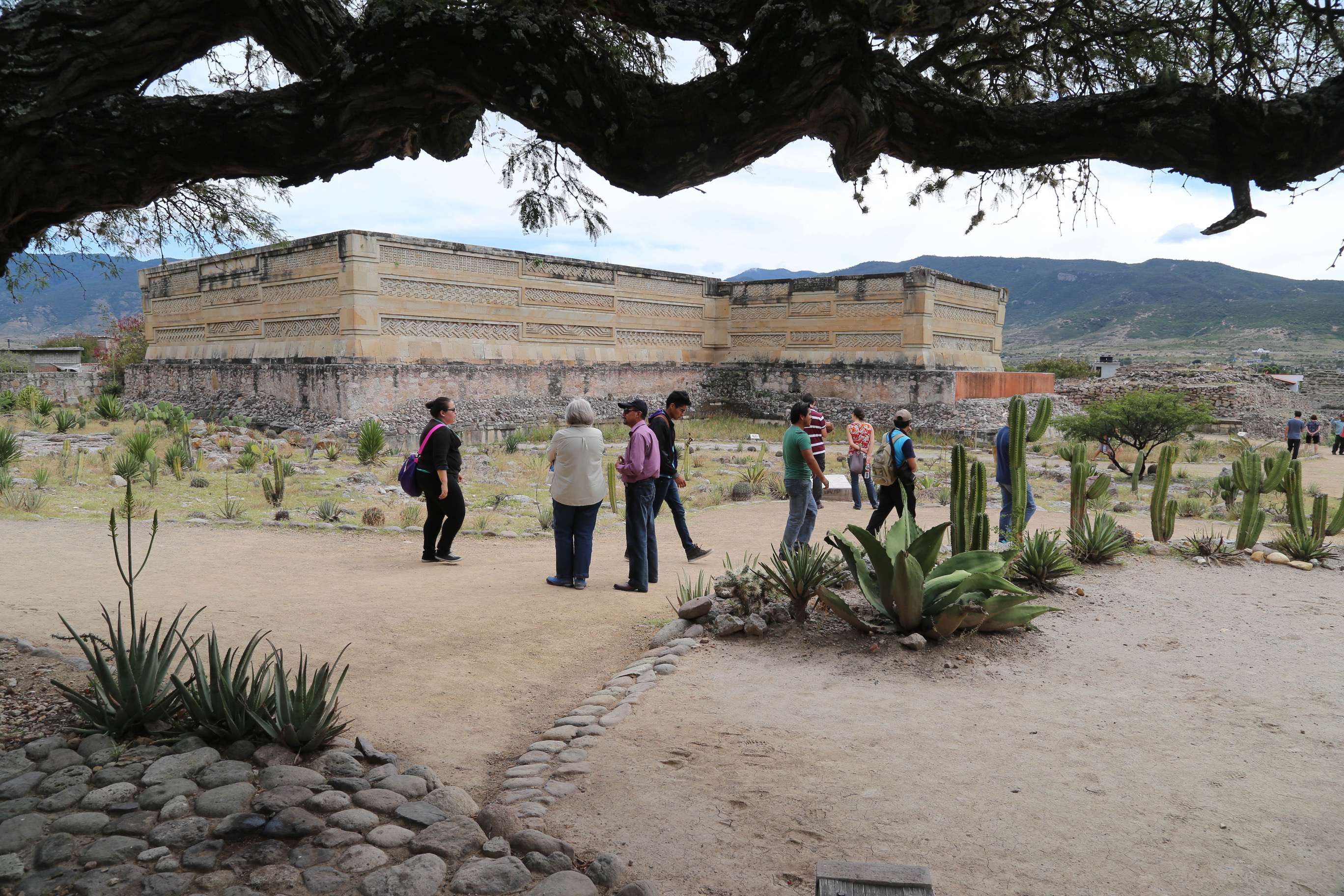 Mitla showcases Zapotec architecture and design at its finest, is the center of Zapotec faith and serves a reminder that ancient ways still have meaning in a modern world.