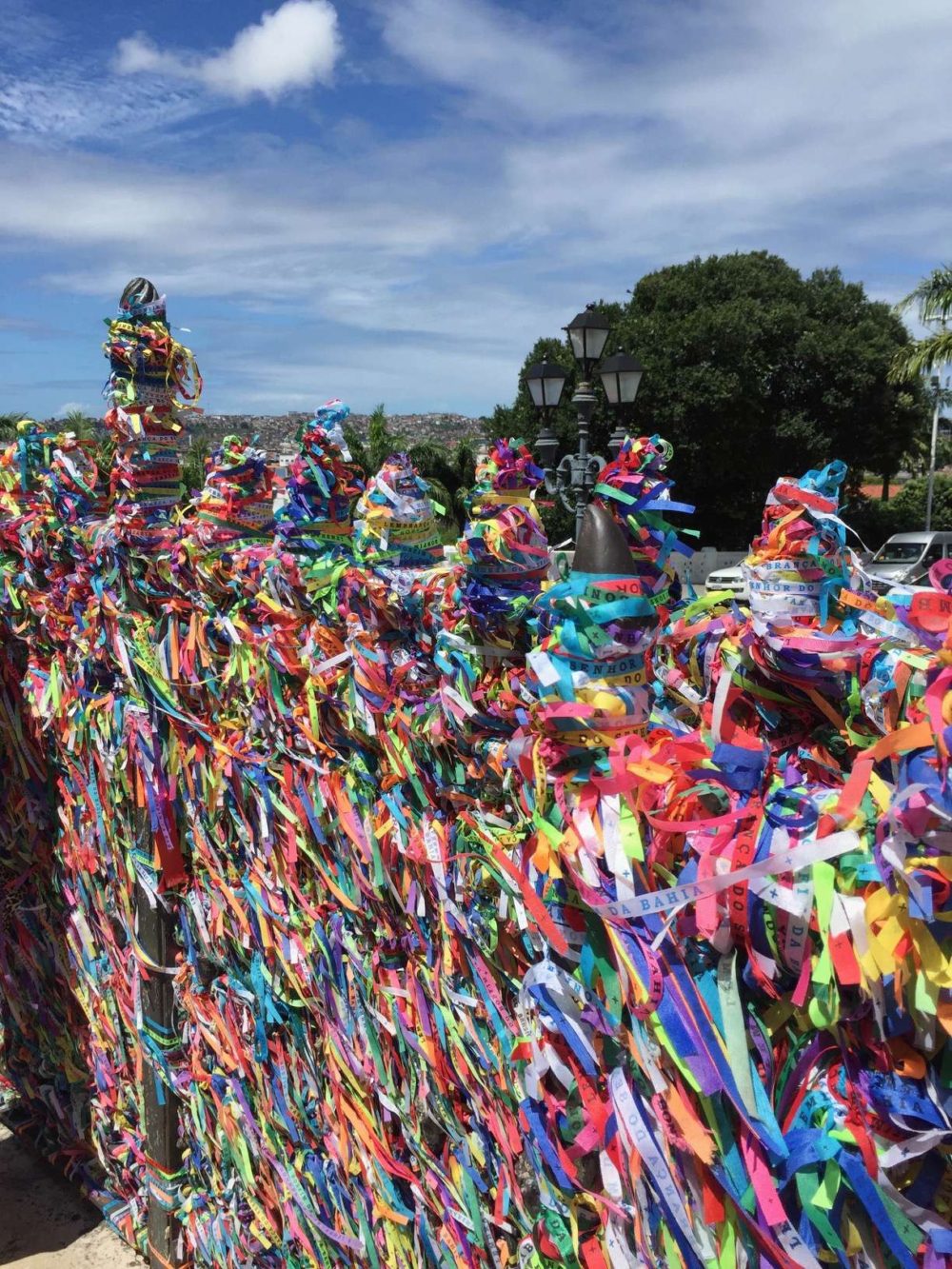 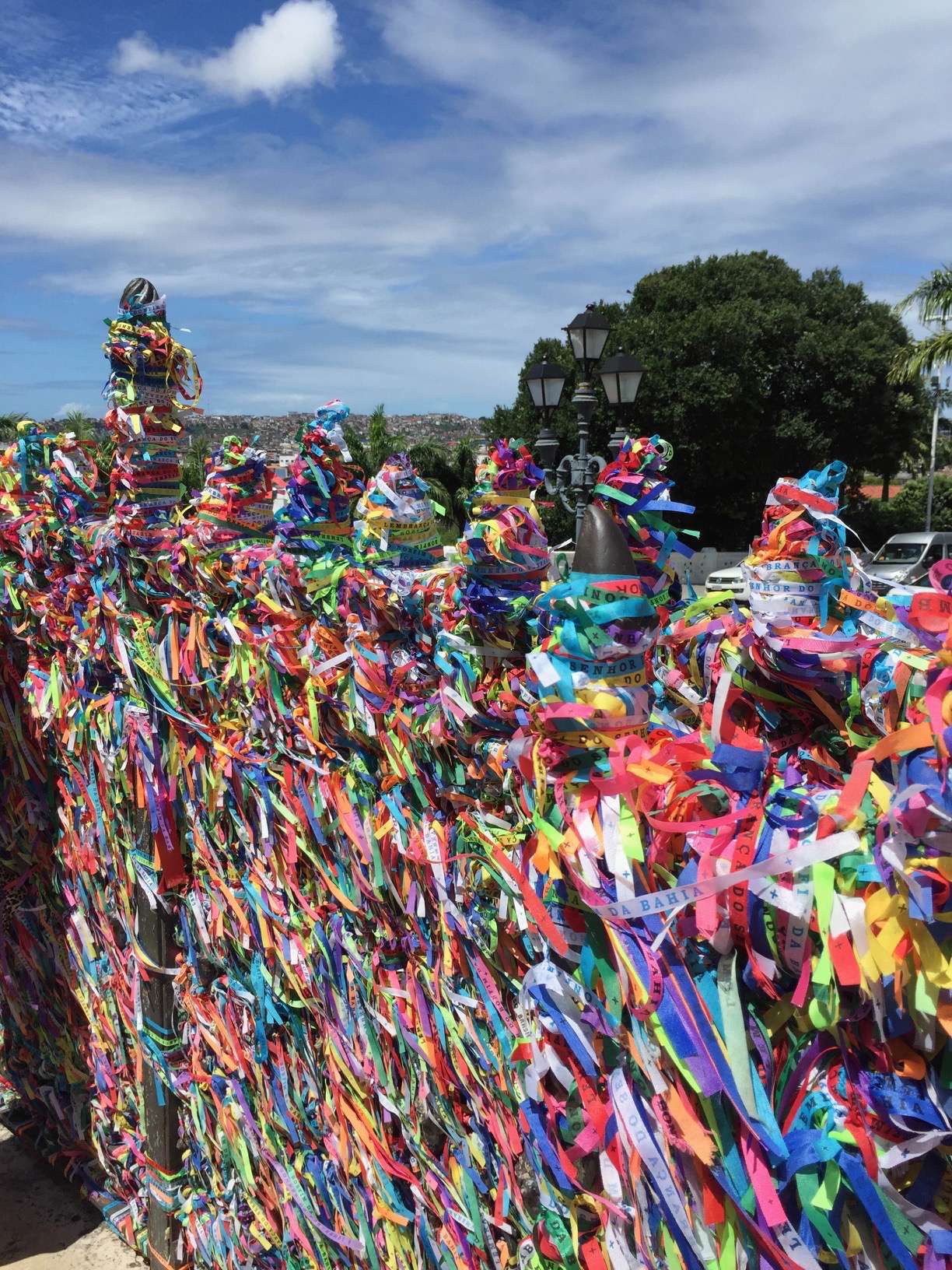 Senhor de Bonfim Church in Salvador, Brazil, is famous for selling colorful wish ribbons. They are silk and 47 centimeters long, supposedly the length of the right arm of Jesus Christ. 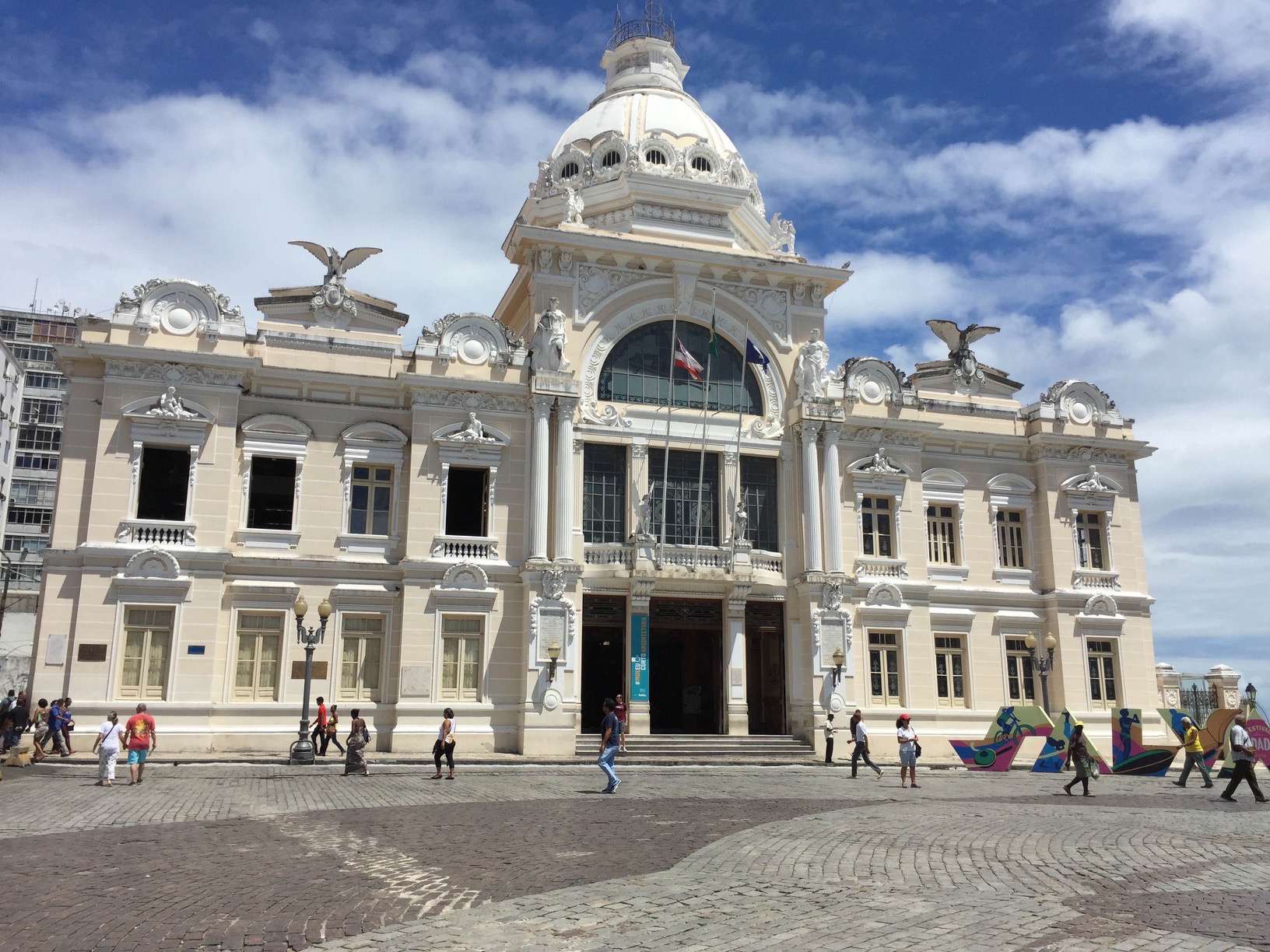 As the first capital of Brazil, Salvador is home to an impressive collection of colonial architecture, like this building that is now a museum.

Salvador began as Brazil’s first capital city, but today it continues as the home of 2.9 million people and the capital of the state of Bahia, with a rich tradition of celebrating Carnival and an historic center that has been designated a UNESCO World Heritage Site. 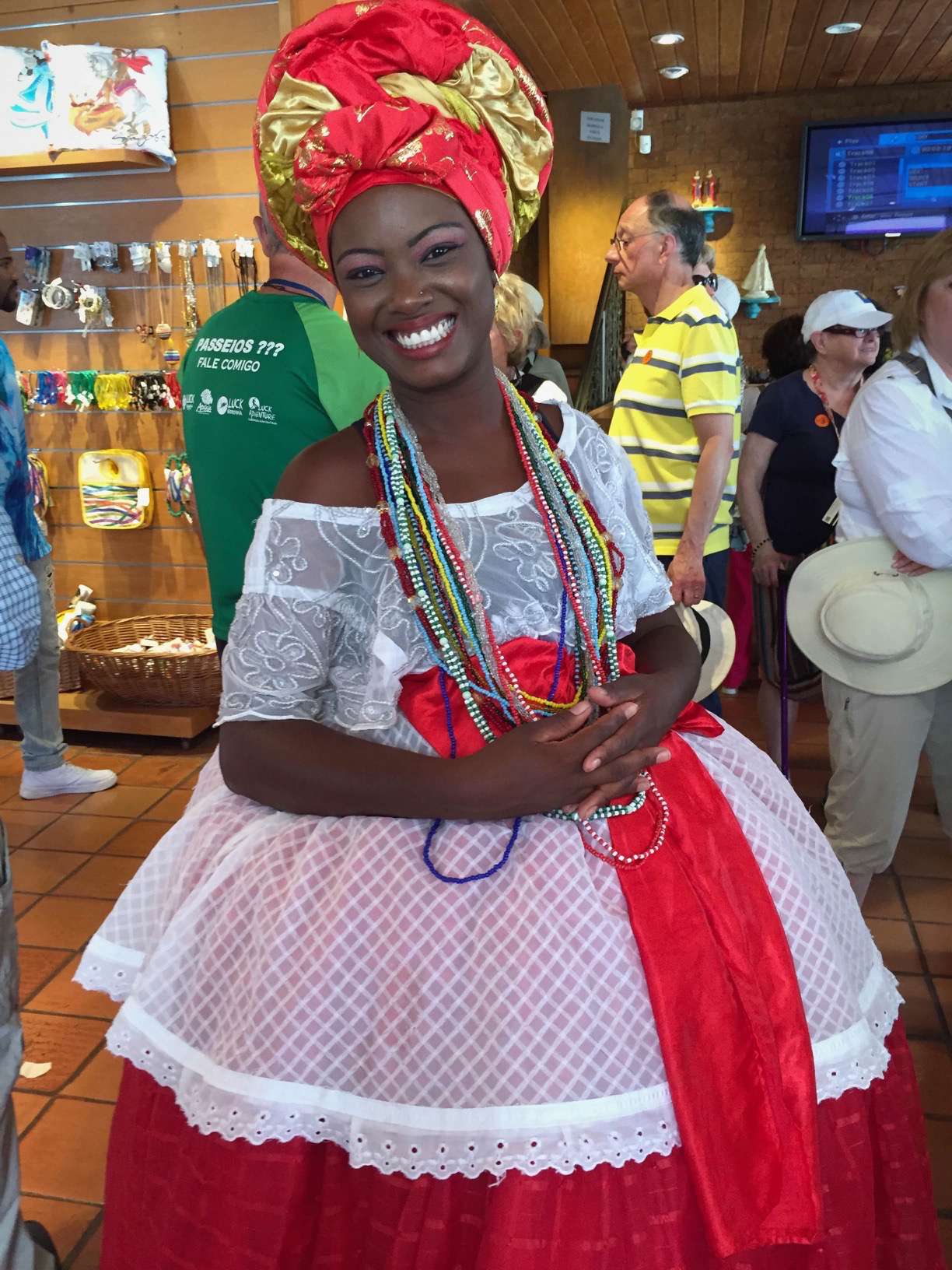 If the job description called for beauty and a smile, this gorgeous lady working at a shop in the old city of Salvador, Brazil is eminently qualified.

Portuguese explorers first landed in what is today Brazil in April of 1500; Salvador was established in 1549 and became the colony’s first capital, until 1808, when it was moved to Rio de Janeiro (in 1960 the capital was moved to the built-from-scratch city of Brasilia). 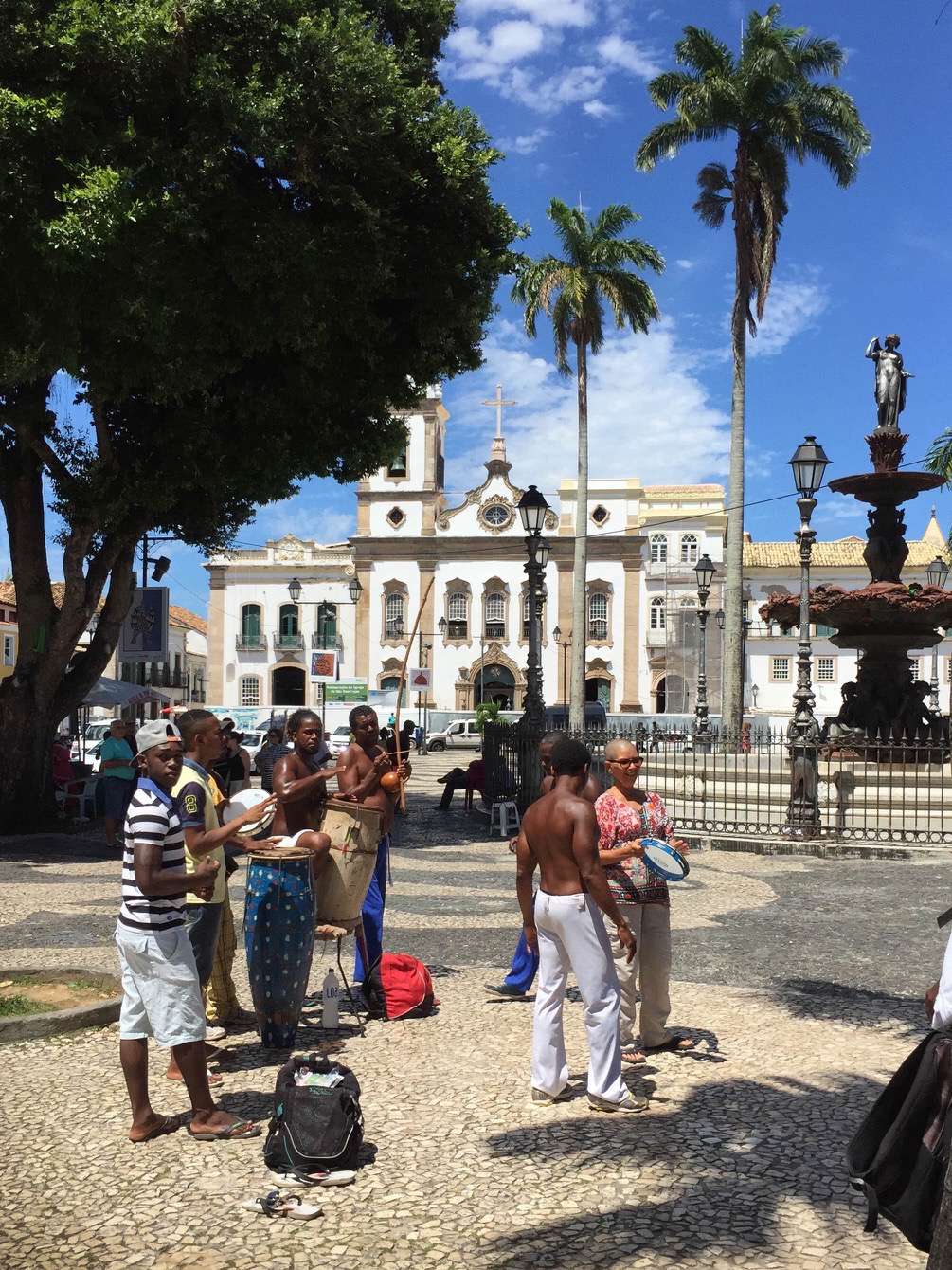 A band of street musicians perform for tips from tourists in Salvador, Brazil.

Salvador is located on the Bay of All Saints, which connects it to the Atlantic Ocean, and became an important city for trade and commerce. Italian explorer Amerigo Vespucci saw the bay on All Saints Day on November 1, 1502 and gave it its name. Sadly, Salvador also became an important location for the burgeoning trade in African slaves and to this day nearly one-half of Salvador’s population has at least some African heritage. As many as 40 percent of all the slaves brought to the New World went through Brazil, which finally outlawed slavery in 1888, making it the last country in the Western world to end the buying and selling of human beings. 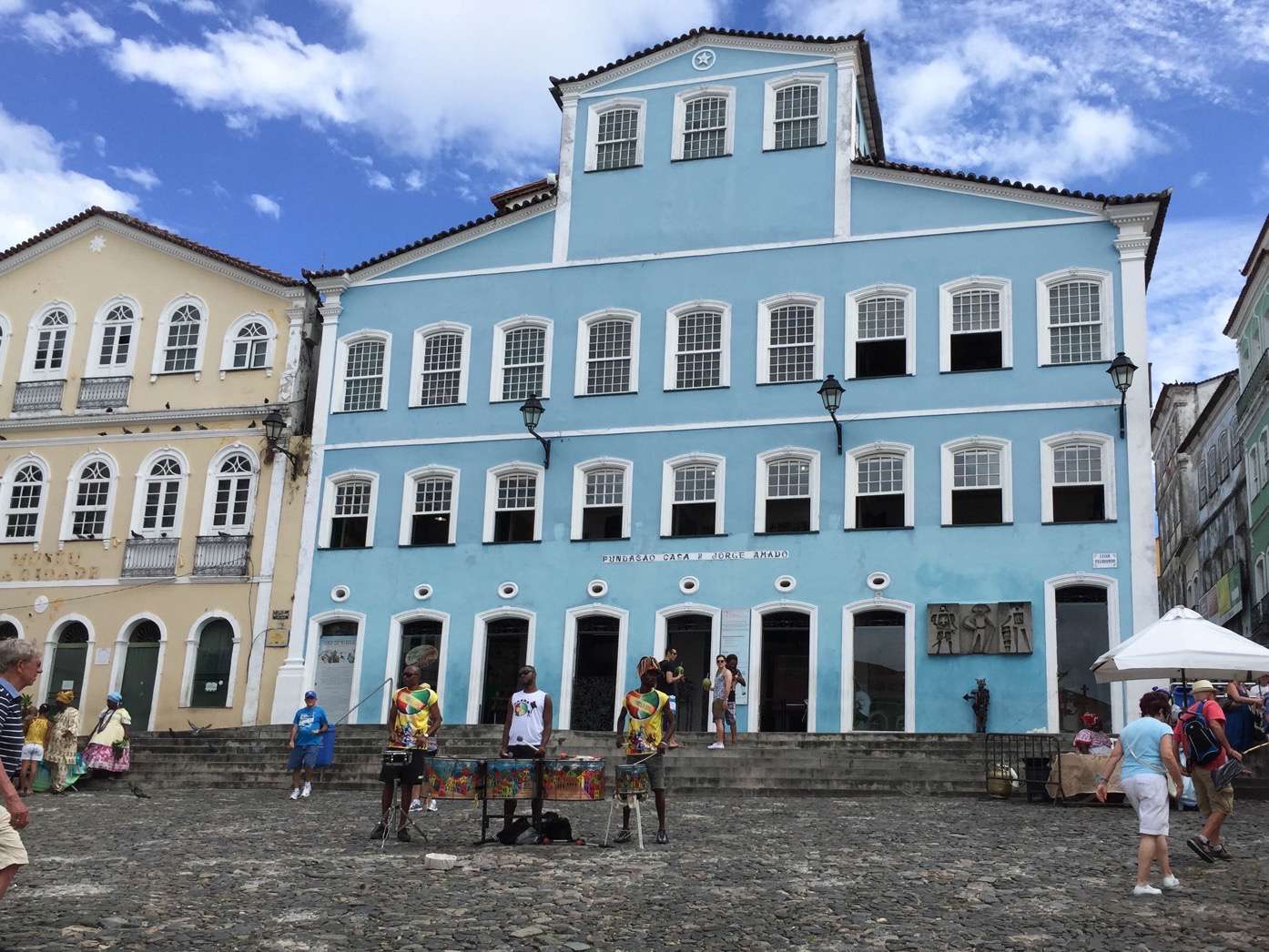 The old city of Salvador is home to beautifully preserved buildings from Brazil’s colonial era as a musical trio waits to drum up some business.

Of course Salvador’s colonial history gave the city its distinctive and beautiful architecture and charm. There are a number of Catholic churches to be found (more than 70 percent of the state of Bahia is Roman Catholic and there are 109 parishes in Salvador), including Cathedral of Salvador, Basilica of St. Sebastian, the Church of Our Lady of Penha, and Senhor de Bonfim Church, famous for those who buy and tie brightly colored silk ribbons to their wrist. Three knots must be tied in the 47-centimeter long ribbon (supposedly the length of the right arm of Jesus Christ). Legend has it that when the ribbon falls off, your wishes come true. 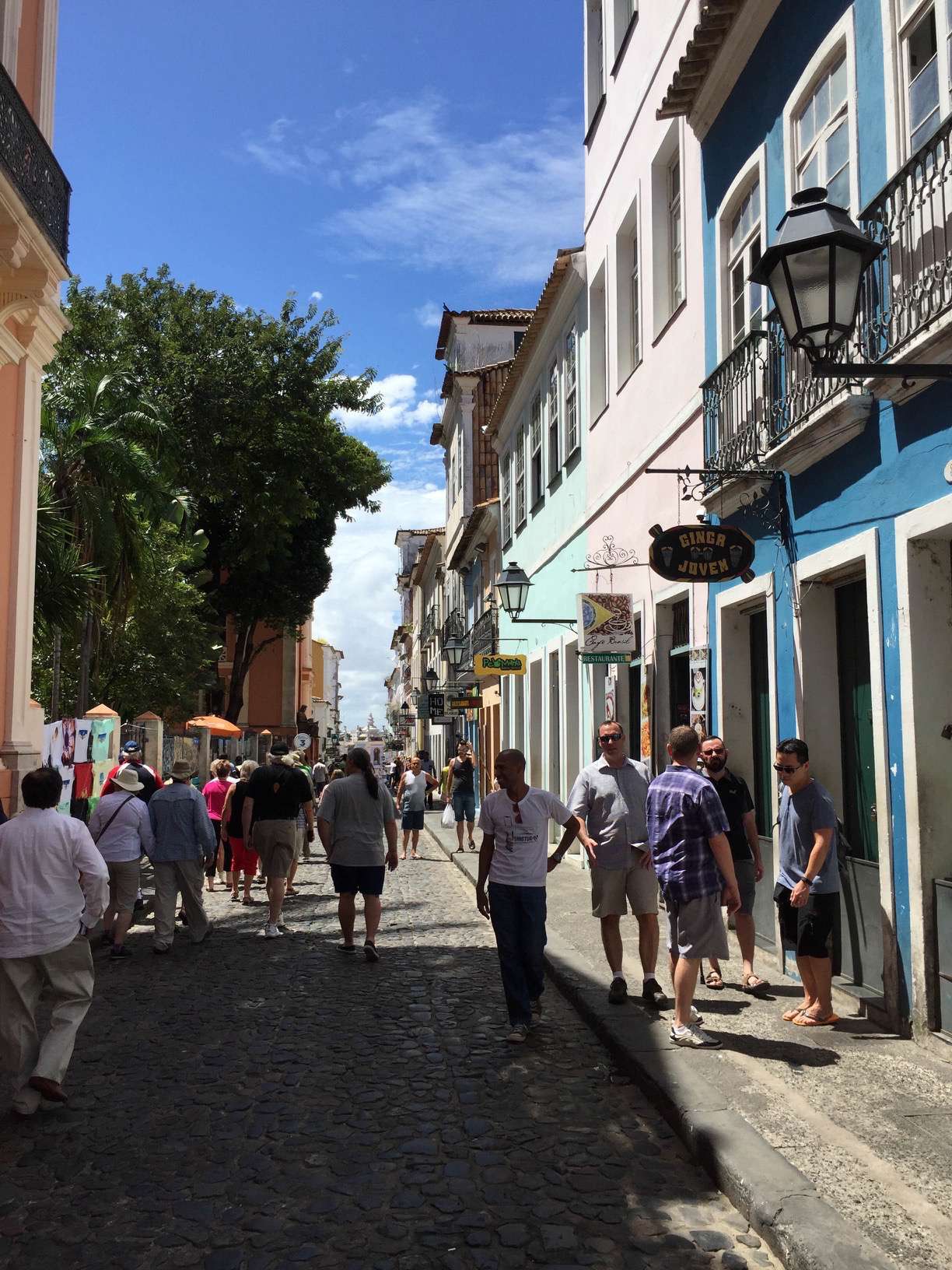 Many of Salvador, Brazil’s tourists are day trippers from cruise ships, who wander mainly in the old city, taking in the architecture and history. 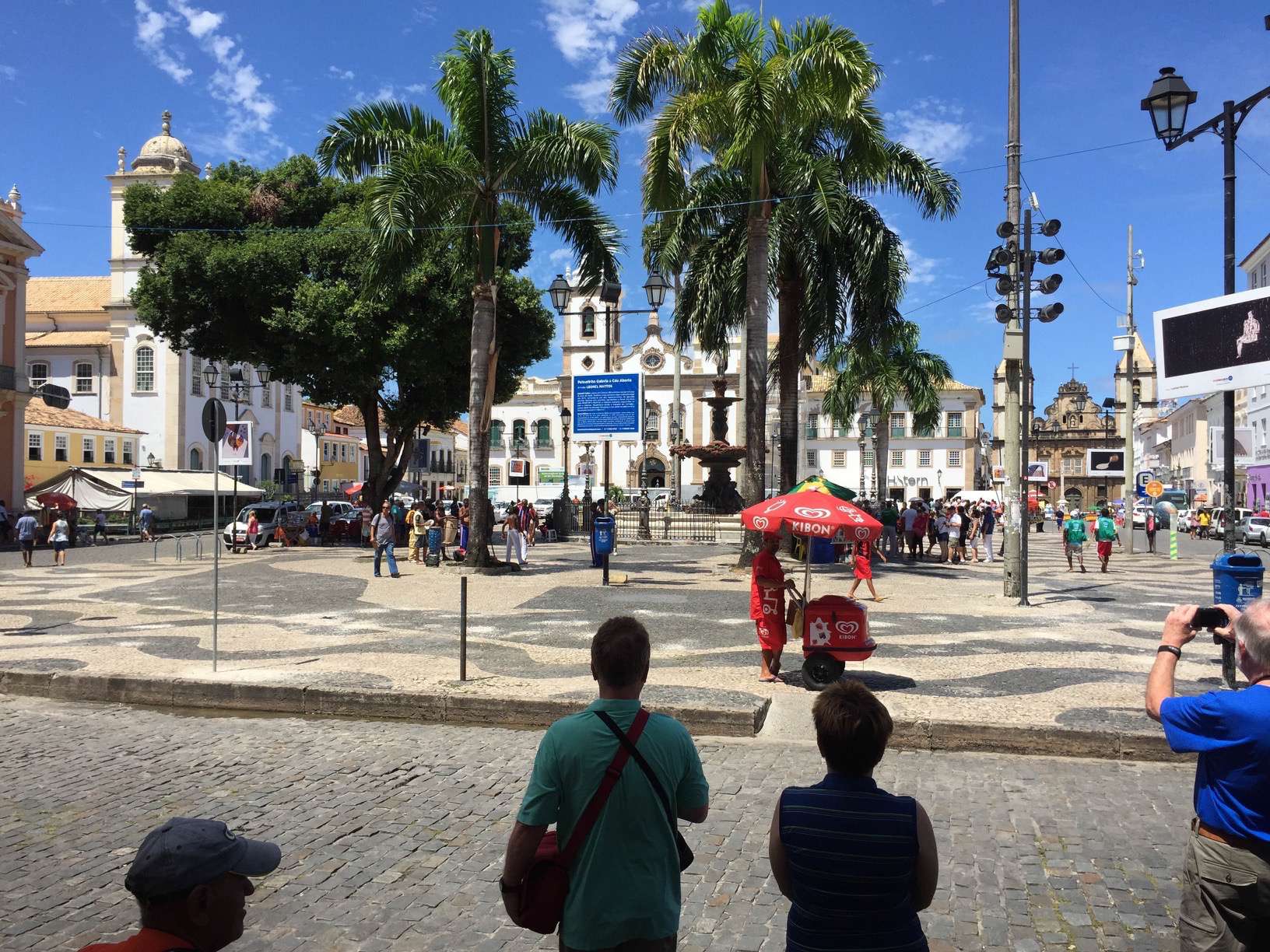 Salvador, Brazil may soon see fewer cruise ships stopping in port, as Brazil’s national government has been insistent about the percentage of Brazilians employed on ships, driving many cruise lines away from Brazil.

The best concentration of colonial-era buildings can be found in the Pelourinho neighborhood, which UNESCO designated as a World Heritage Site in 1985. Today the neighborhood is a very popular stop for tourists and cruise ship passengers. 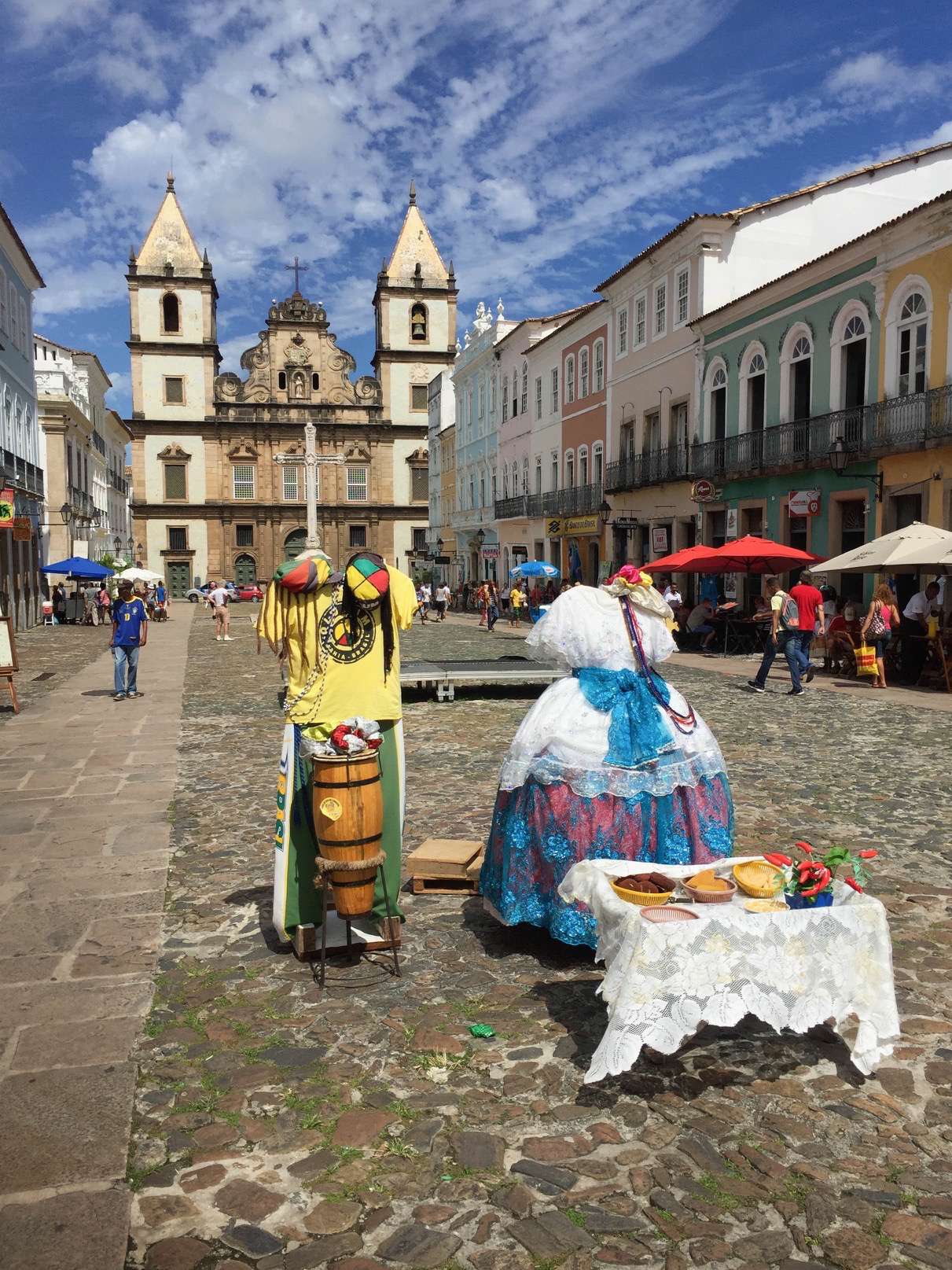 It’s too hot to stand in the sun in the Pelourinho neighborhood, so the dress at the table conveys the idea while a vendor waits in the shade. 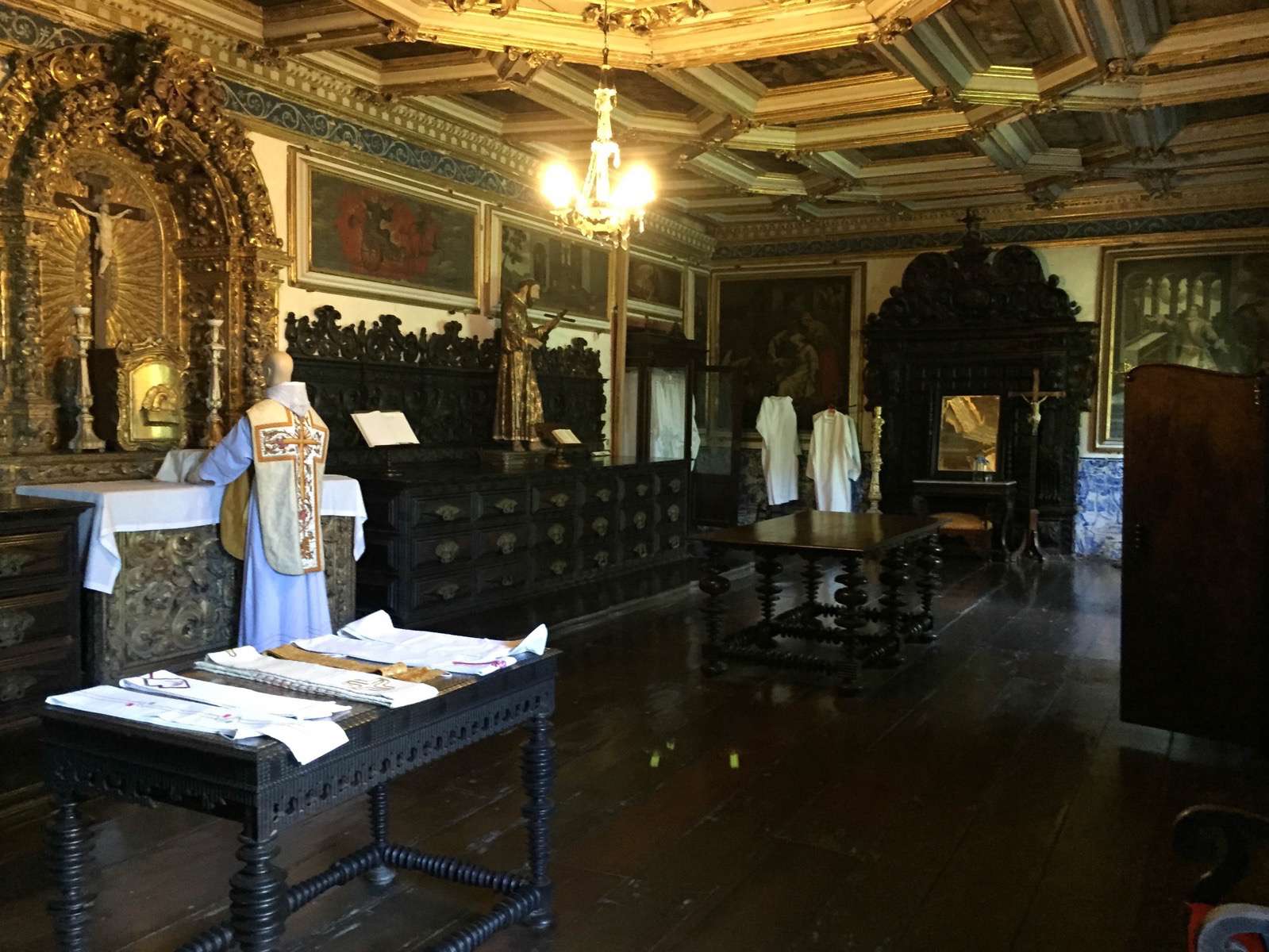 A mannequin stand-in poses as a cleric at an altar inside a Catholic Church that has been converted into a museum in Salvador, Brazil.

The history of Brazil, (Brazil ranks fifth in the world in both population and land mass), has been one of both triumph and tragedy. Its vast natural resources, including timber, gold, silver, gems, and more recently oil and natural gas, have provided considerable economic wealth. However, that wealth has also brought woes. 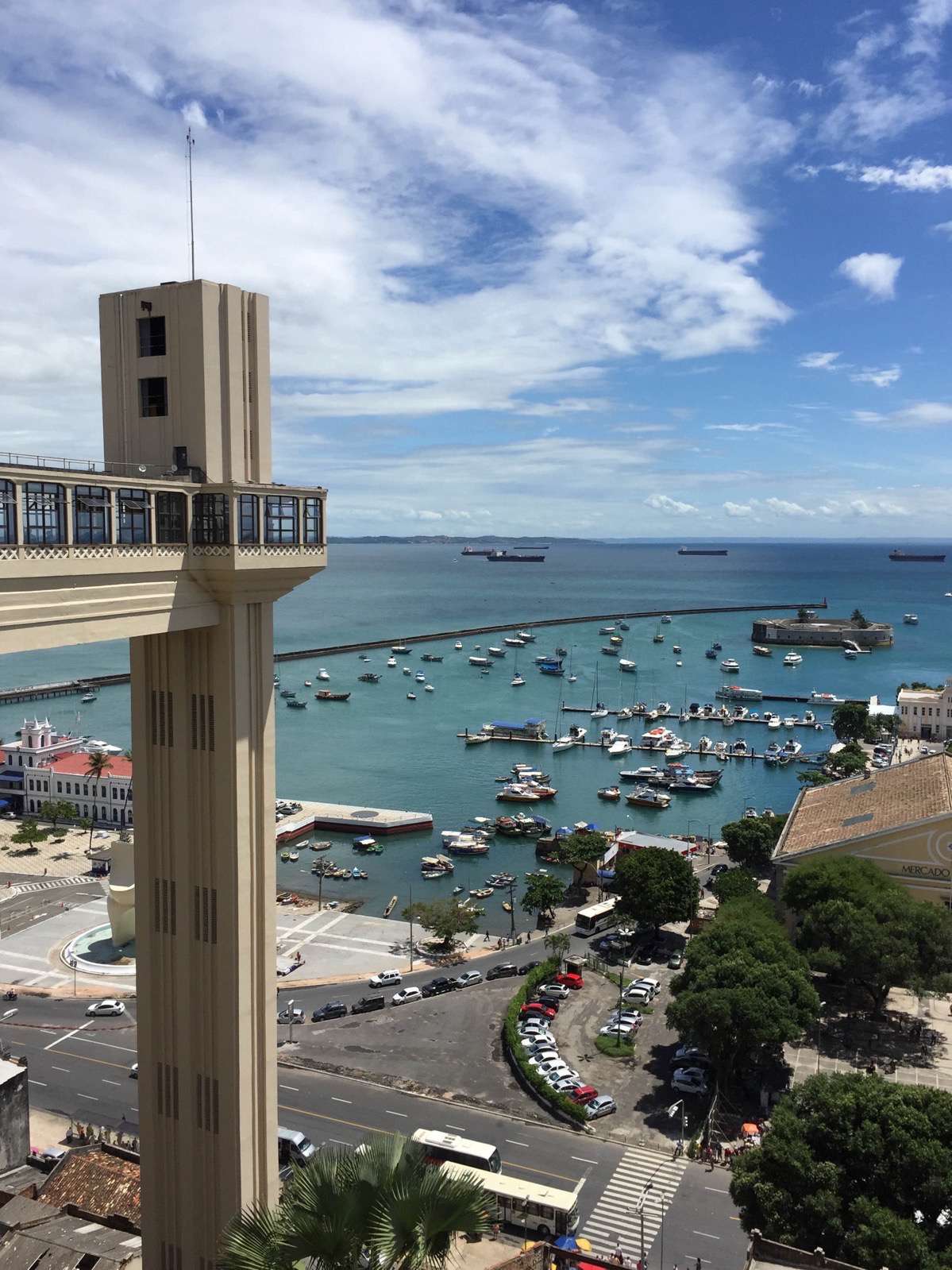 Elevador Lacerda carries people up from the harbor area of Salvador to the more tourist areas of the city. 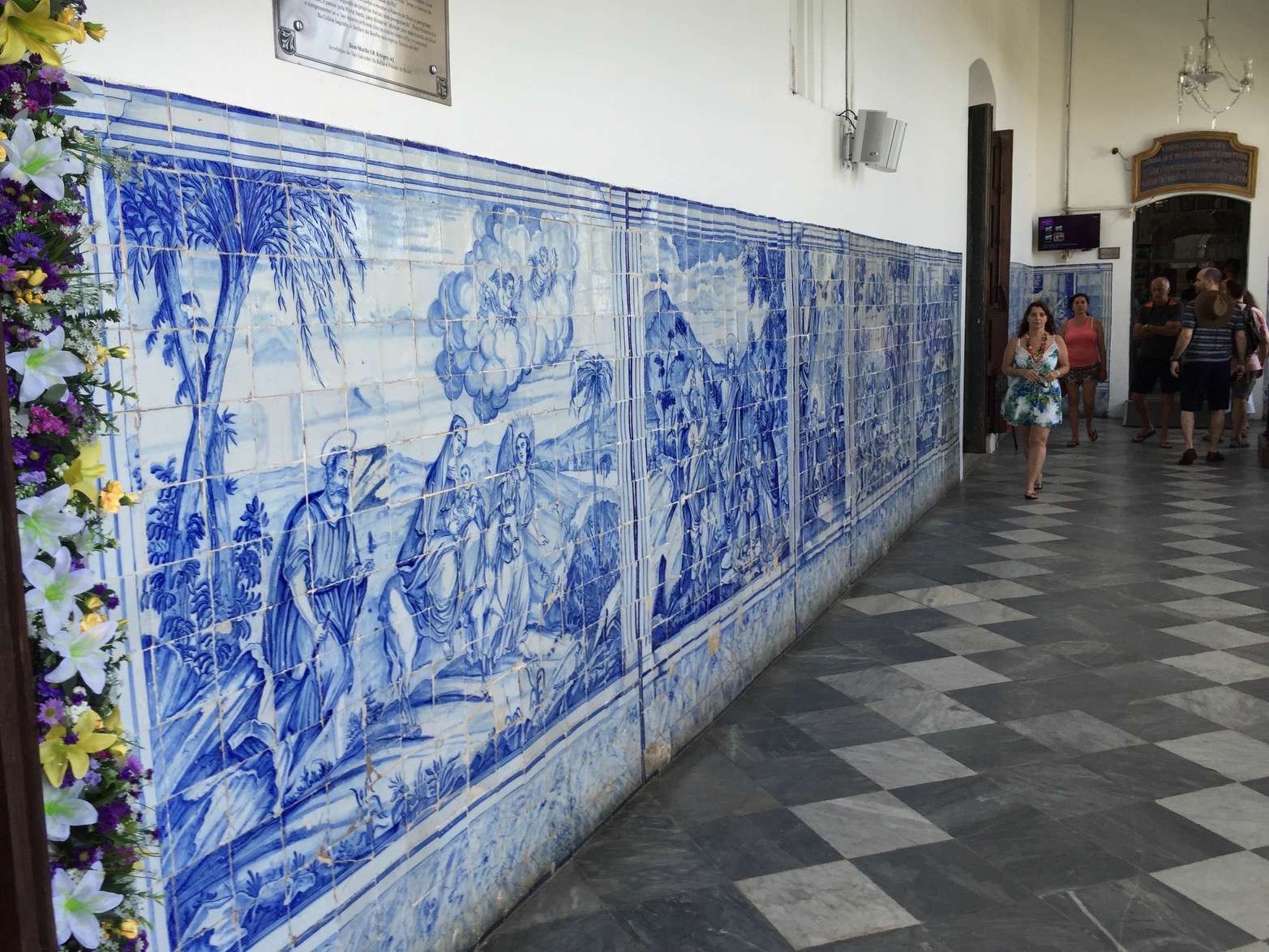 The blue tile panels in a corridor of an old church in Salvador, Brazil, depict religious stories from the perspective of the Catholic Church.

Brazil struggles with a number of challenges including deforestation through illegal logging as well as clearing land for cattle ranching. In the past few decades, discoveries of large oil and natural gas fields have resulted in corruption by politicians as well as those working in the semi-public energy giant, Petrobras, though reforms are underway. 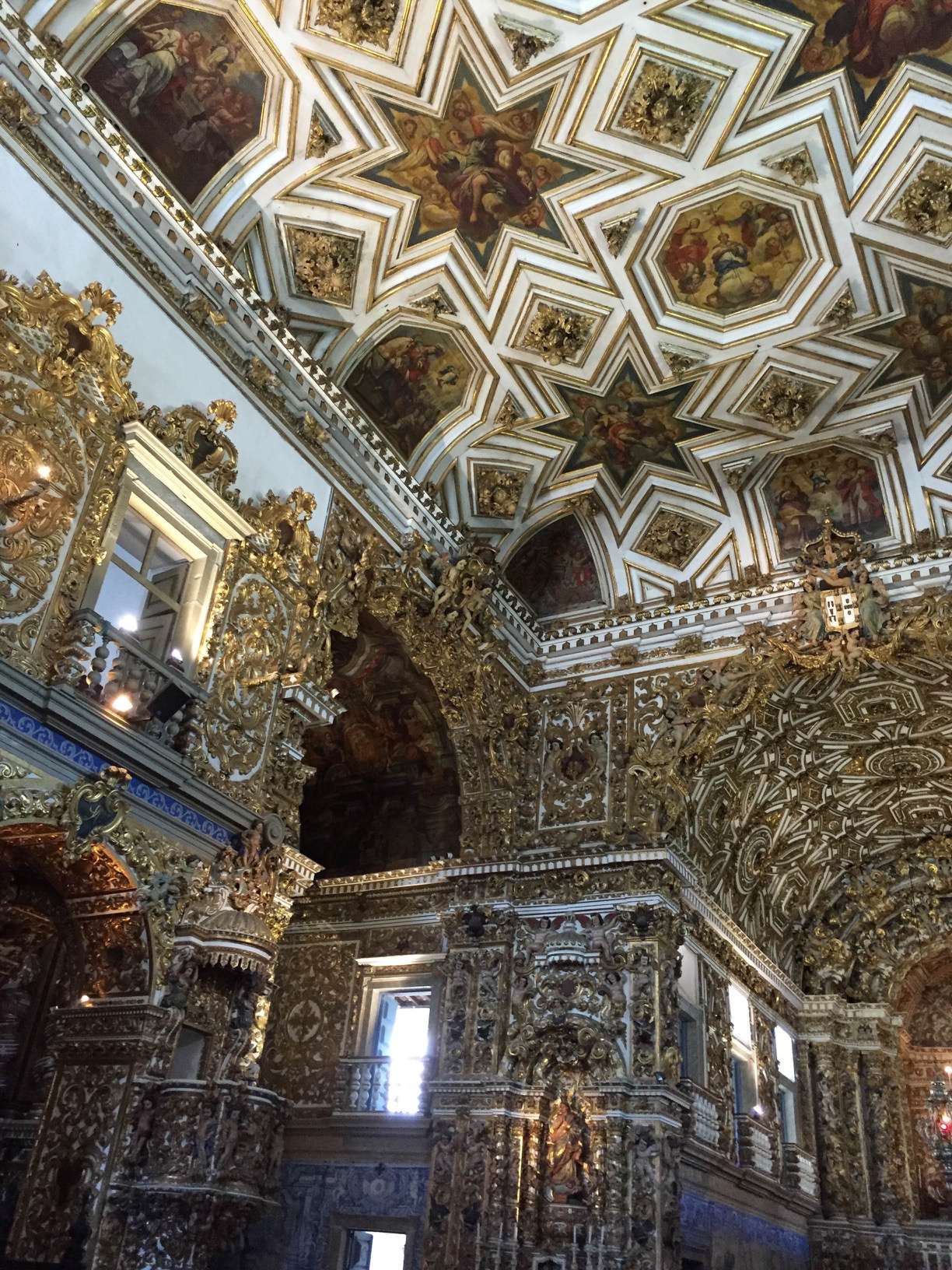 Upwards of 70 percent of the residents of Salvador, Brazil are Roman Catholic, dating back to the Portuguese colonial days, with many ornately decorated churches.

Like any nation, Brazil’s struggles with lawlessness, which has to some degree, come to Salvador. As poverty, crime, drugs, and gang violence plague cities like Sao Paolo and Rio de Janeiro, police crackdowns have pushed those problems onto cities like Salvador. Without a doubt many areas of Salvador are safe, but there are some problems with crime, so visitors should be aware of their surroundings. 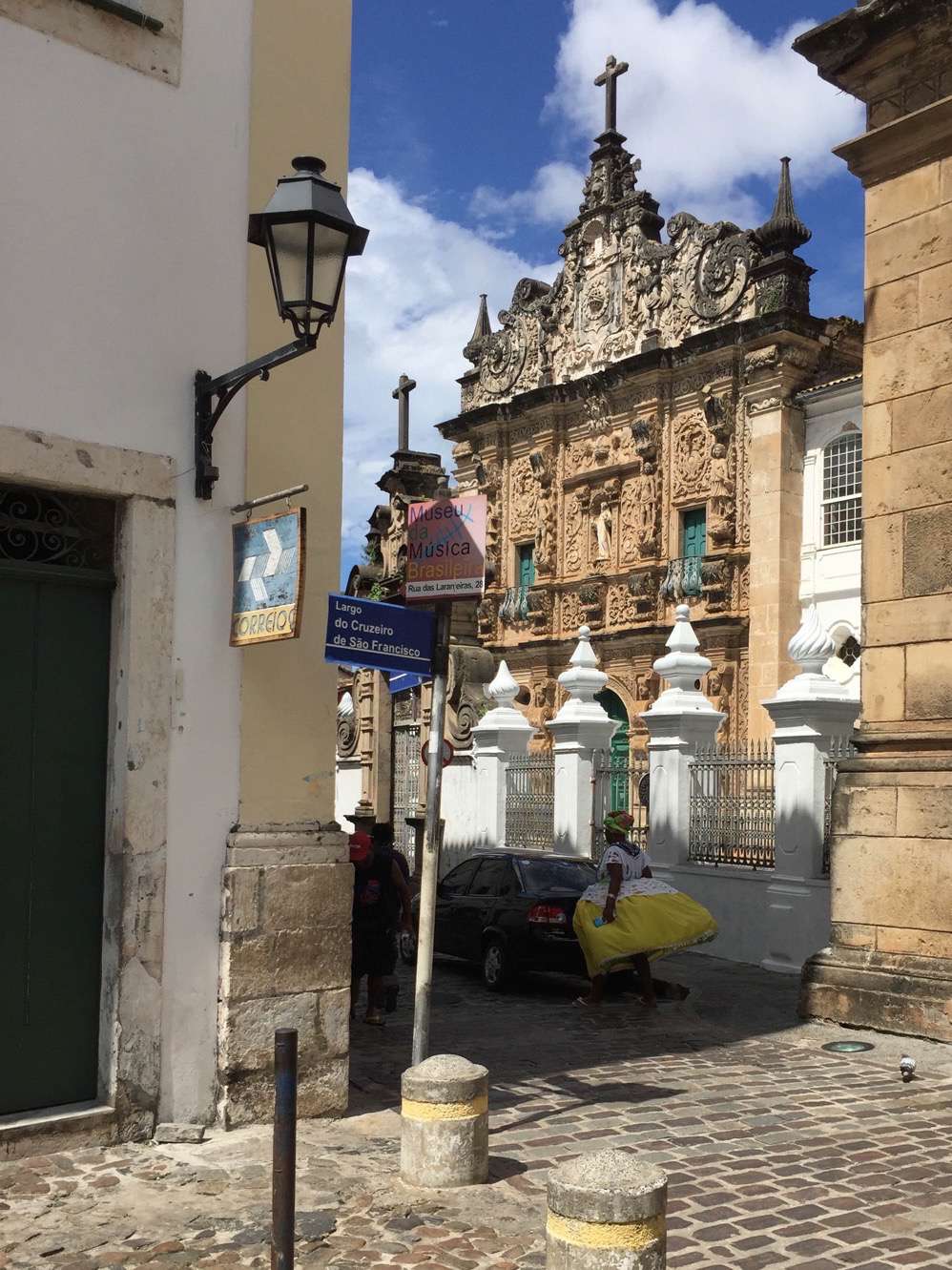 Still an important part of Salvador, the Catholic Church maintains a strong presence in the city as a costumed worker heads to her job. 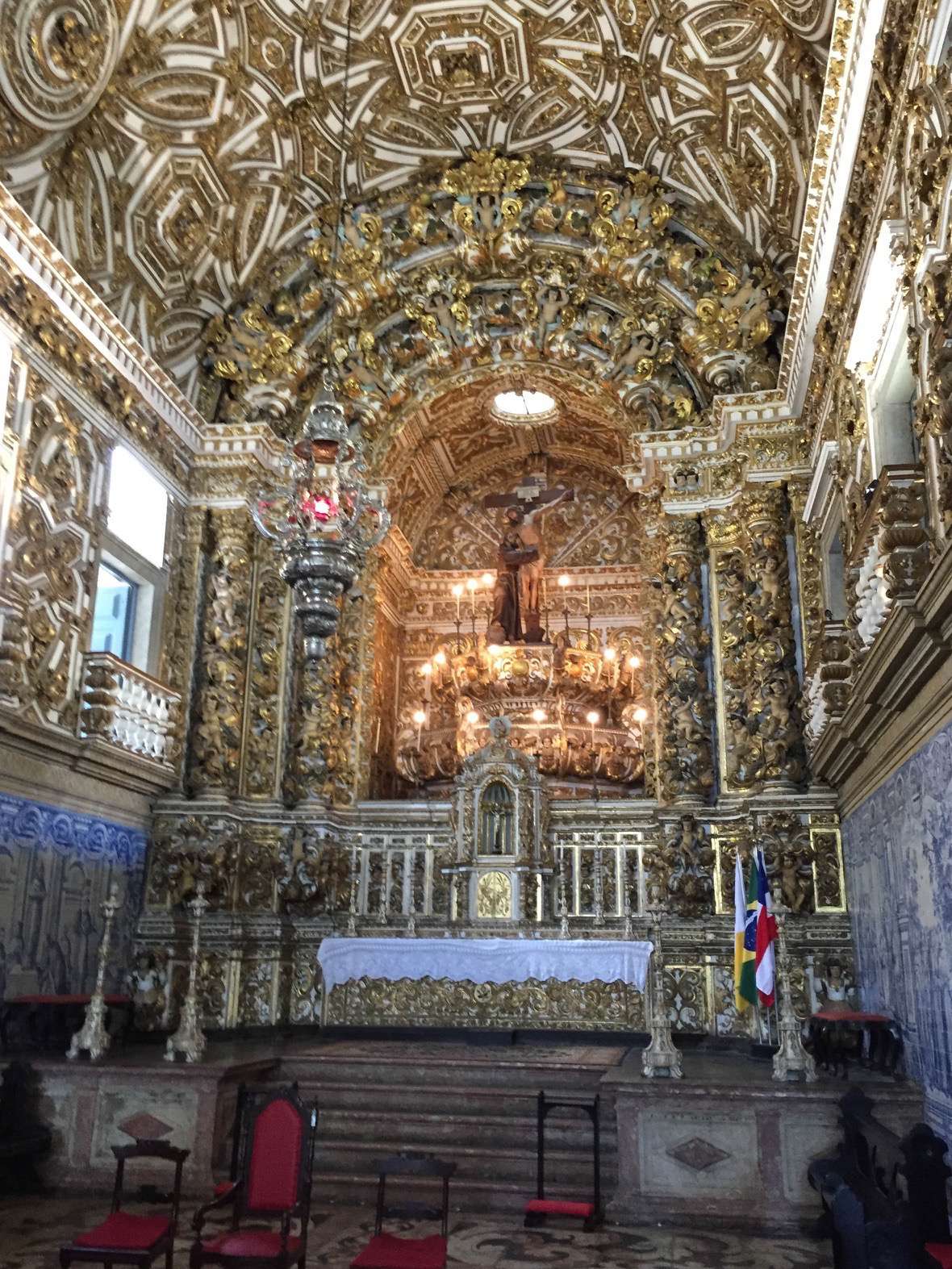 The inside walls and ceilings of the old Catholic churches in Salvador, Brazil are filled with artwork, religious symbology, and gold leaf.

Brazil’s history of human habitation dates back more than 10,000 years. Even though it is a nation hundreds of years in the making, with a rich history being preserved in places like Salvador, this fascinating country is settling into its rightful place in the world. 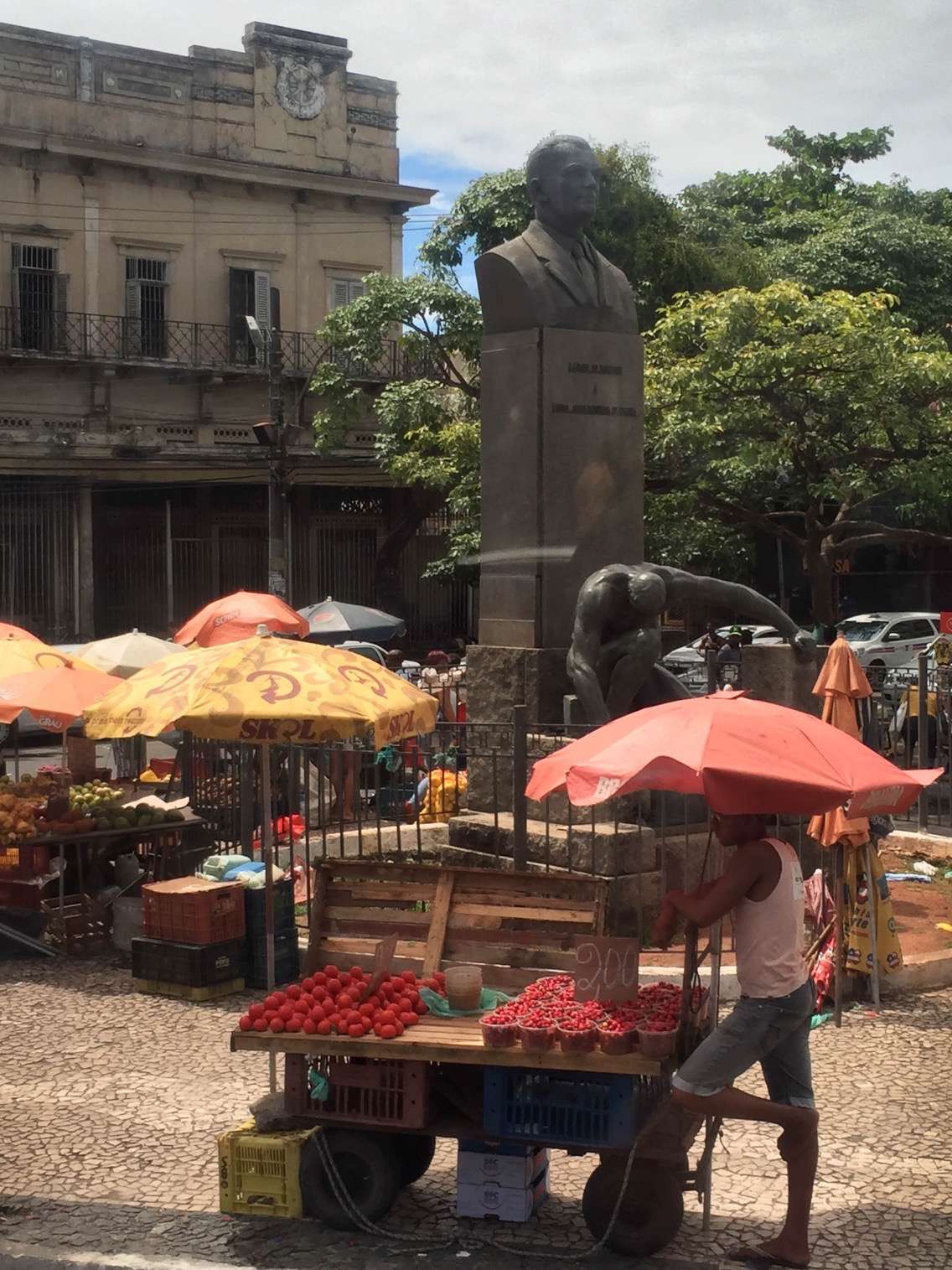 Vendors gather in the square under a sweltering Brazilian sun in Salvador, waiting for customers to stroll by. 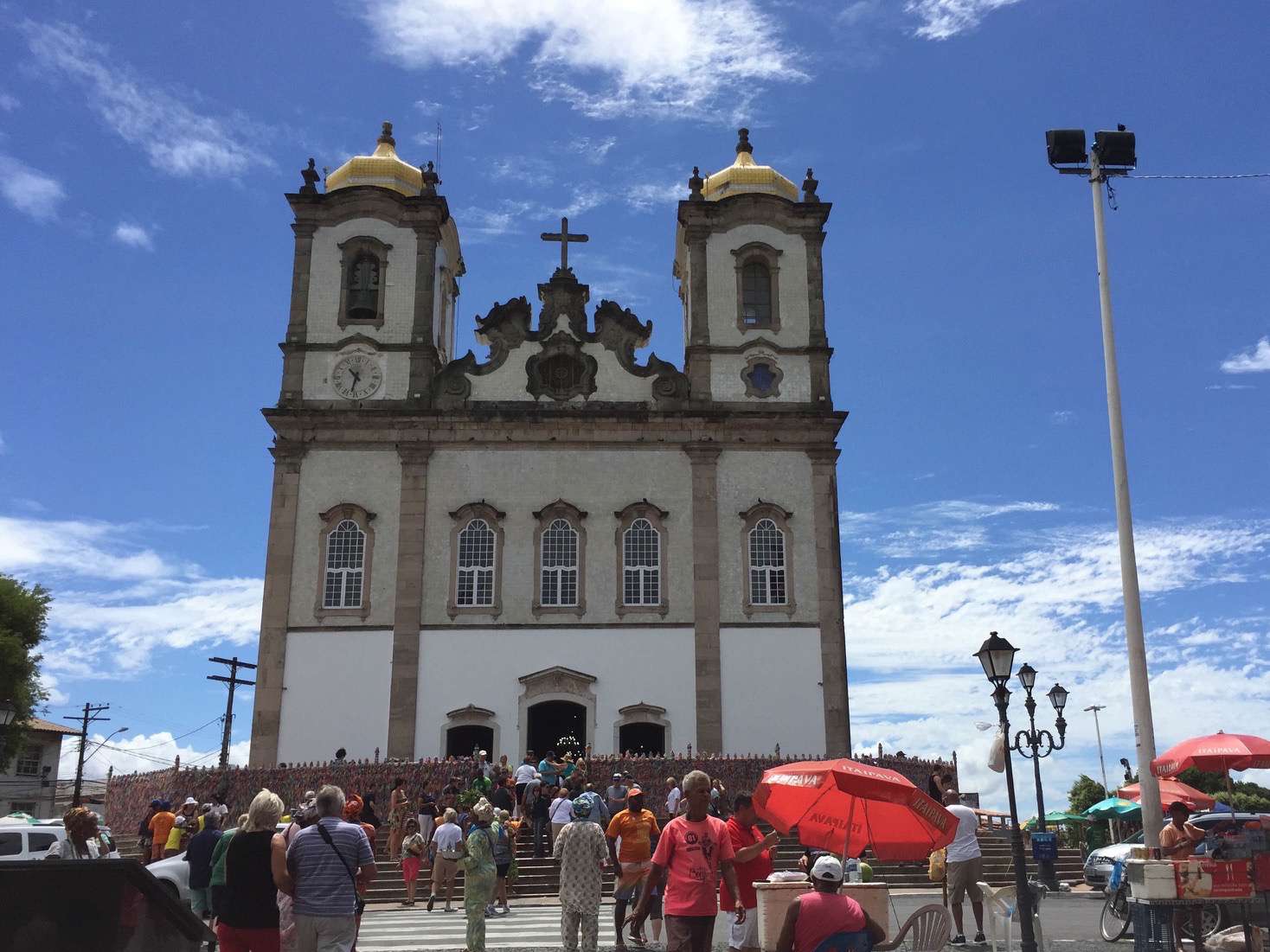