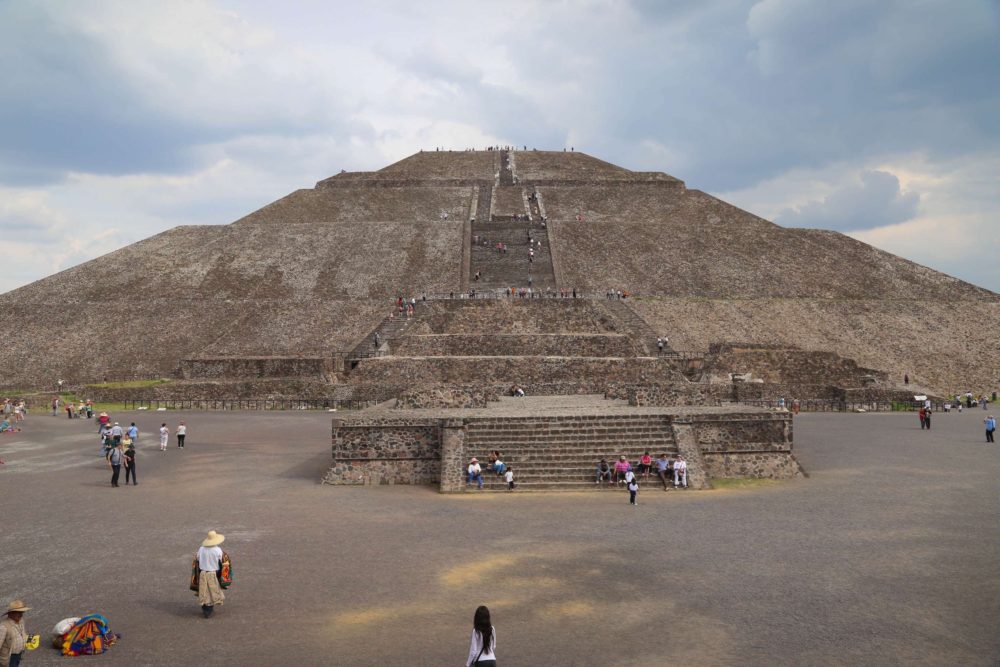 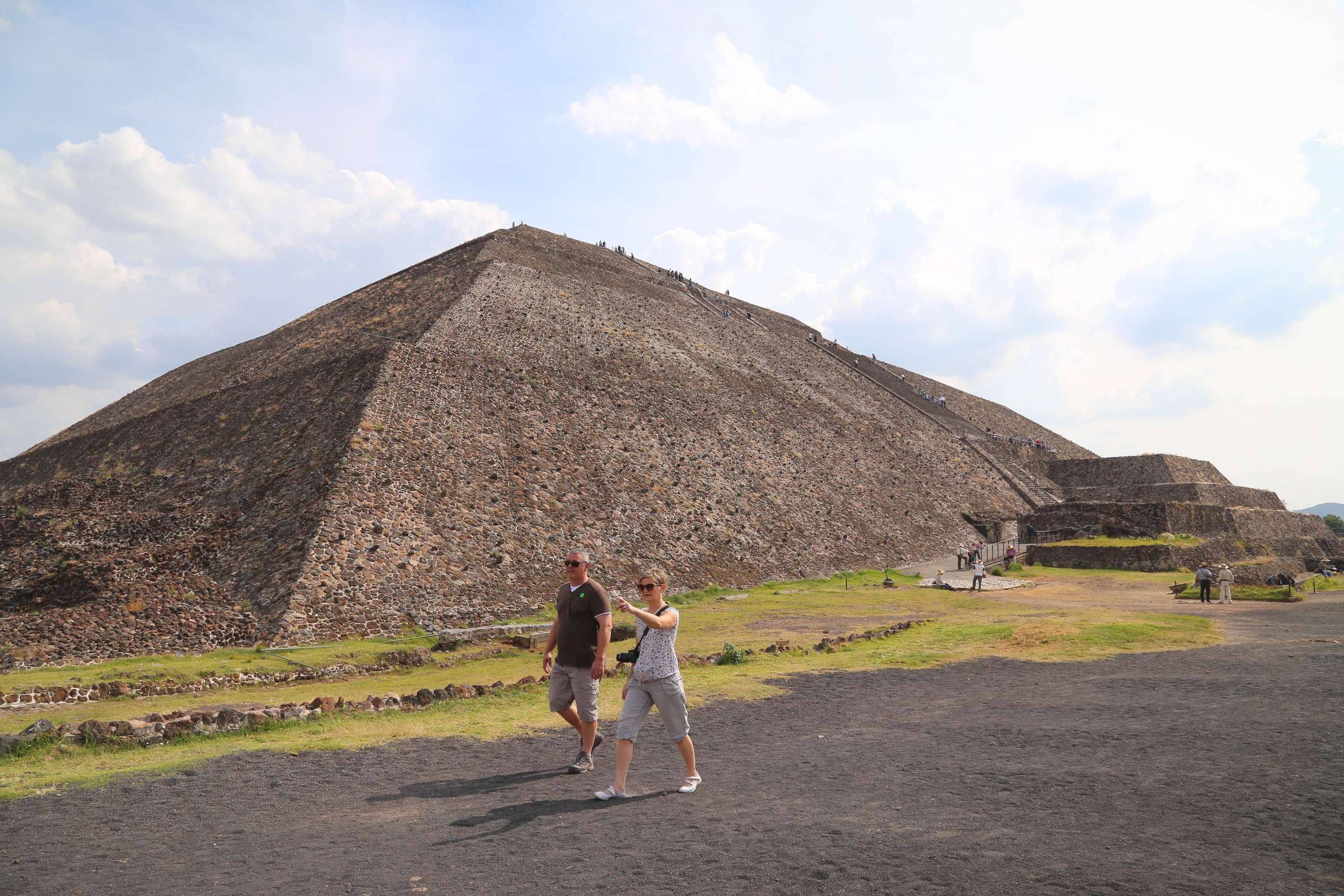 Human beings are dwarfed in size at the Pyramid of the Sun, the largest pyramid in Mesoamerica and third largest in the world, at Teotihuacan.

Any number of markers can attest to a civilization’s preeminence. Art, mathematics, science, law, politics and architecture are just a few examples. Some of the greatest architecture to be found in ancient Mesoamerica is a complex of temples and buildings called Teotihuacan, about 30 miles northeast of Mexico City. 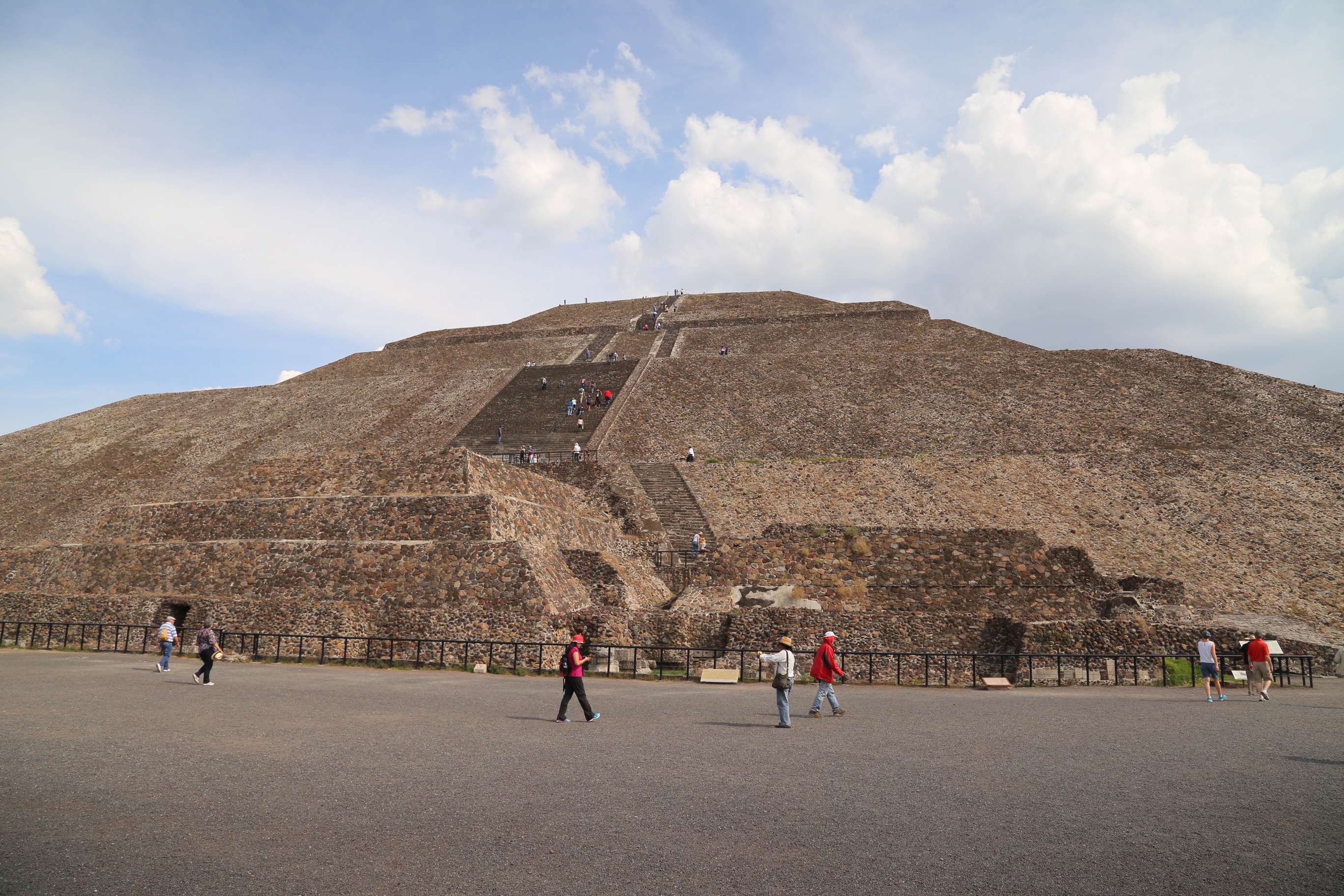 The scale of the Pyramid of the Sun is huge and to think this site was conceived and constructed by people who had no metal tools, horses or other draft animals to assist them boggles the mind.

But for all of Teotihuacan’s greatness the most basic question may never be answered – who built it? And also, what happened to the people who lived at Teotihuacan? 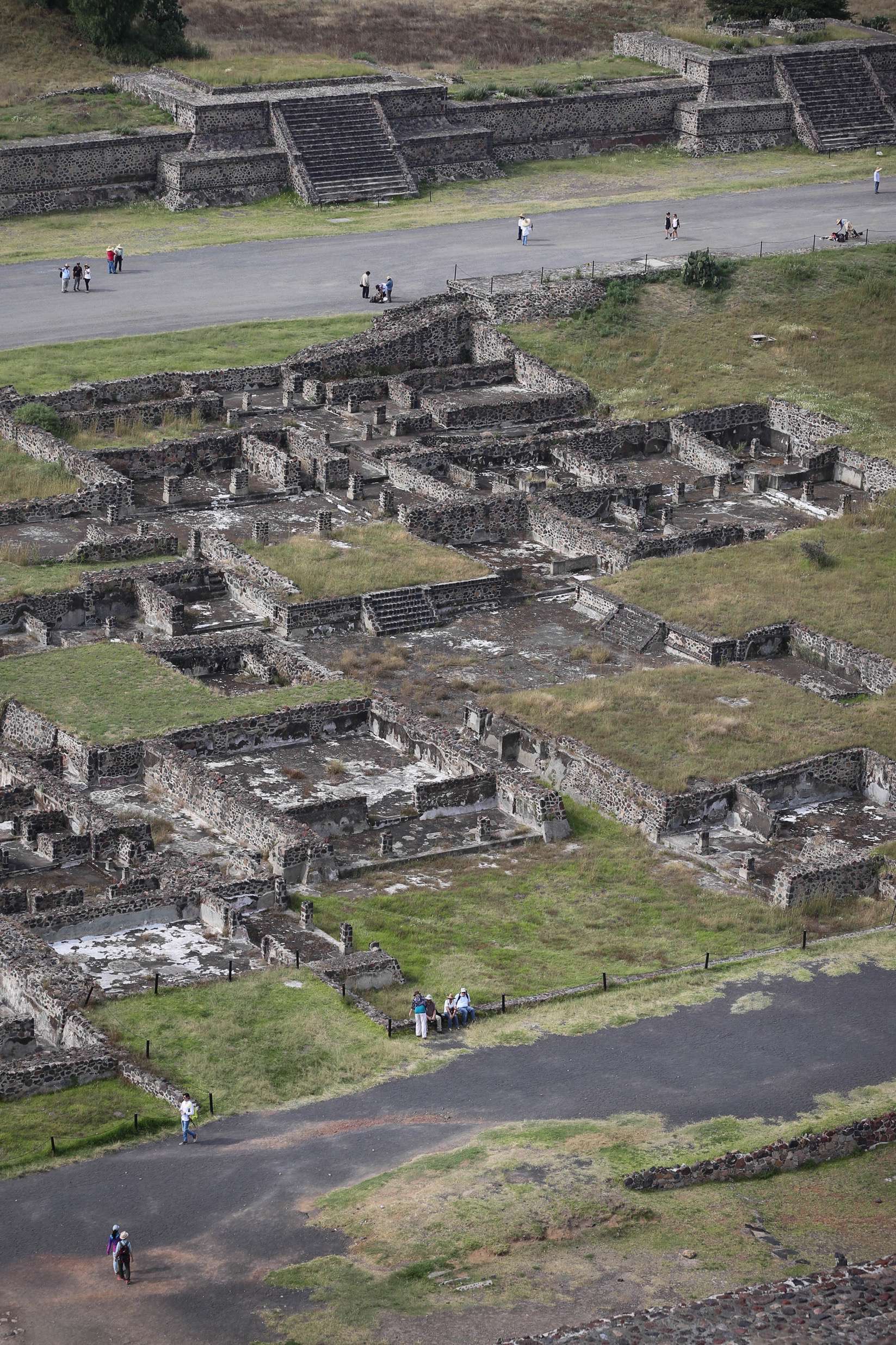 Scientists believe that upwards of 125,000 people lived and worked at Toetihuacan, where excavation and restoration work continues.

Scholars speculate as to who constructed the complex that includes the Pyramid of the Sun, Pyramid of the Moon and the Temple of the Plumed Serpent (Temple of Quetzalcoatl). Some believe Teotihuacan was a multi-ethnic site and others believe elements of the region’s Totonac, Otomi or Nahua peoples are responsible. At its height upwards of 125,000 lived, worked, played, and worshiped their gods within the area’s boundaries. Aztecs, who arrived in the area approximately 1,000 years after it was built, bestowed the site with the name Teotihuacan, “the place where gods were created.” 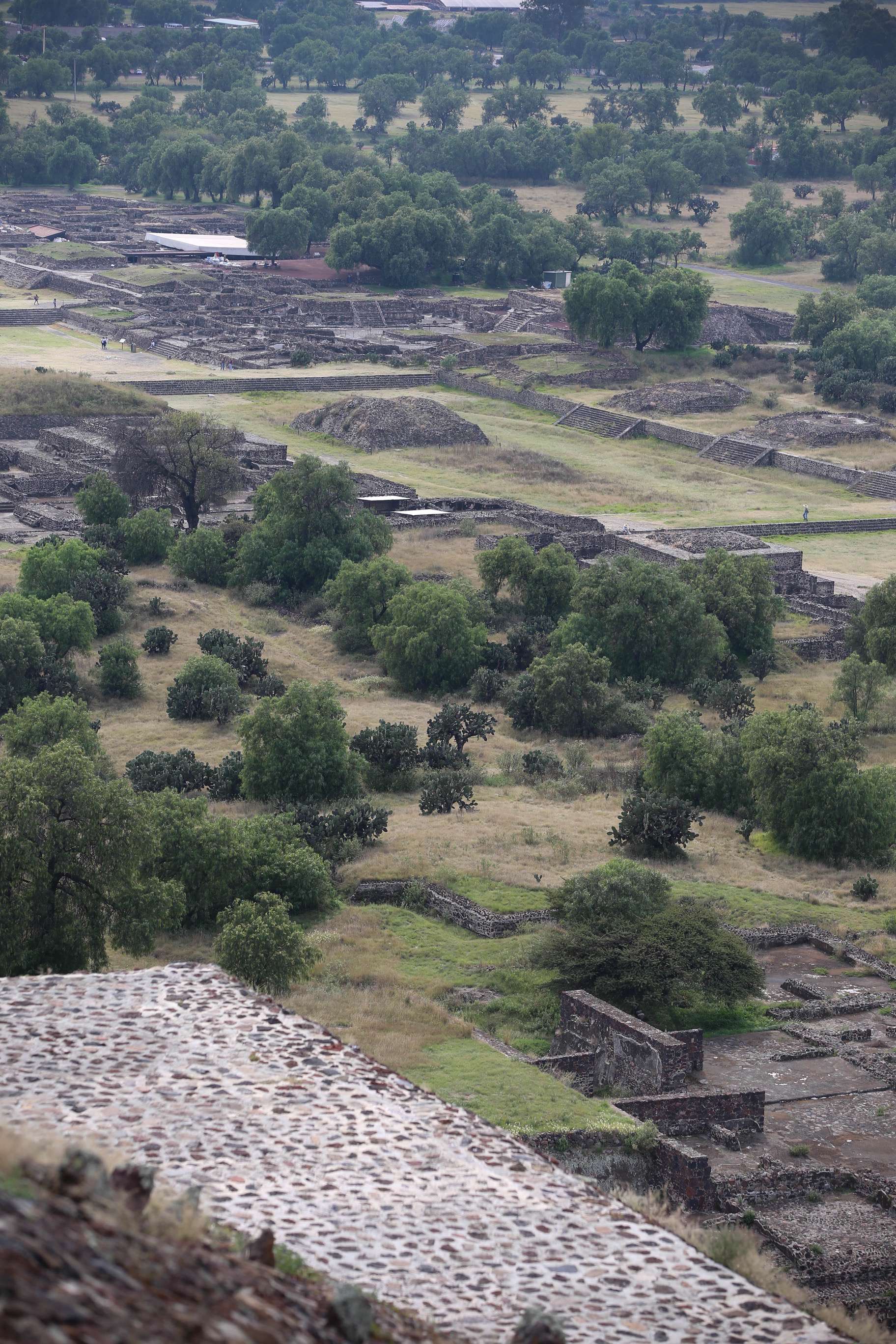 Since ‘modern’ archeologists began digging at Teotihuacan, more of the complex is being revealed, like this section south of the Pyramid of the Sun. 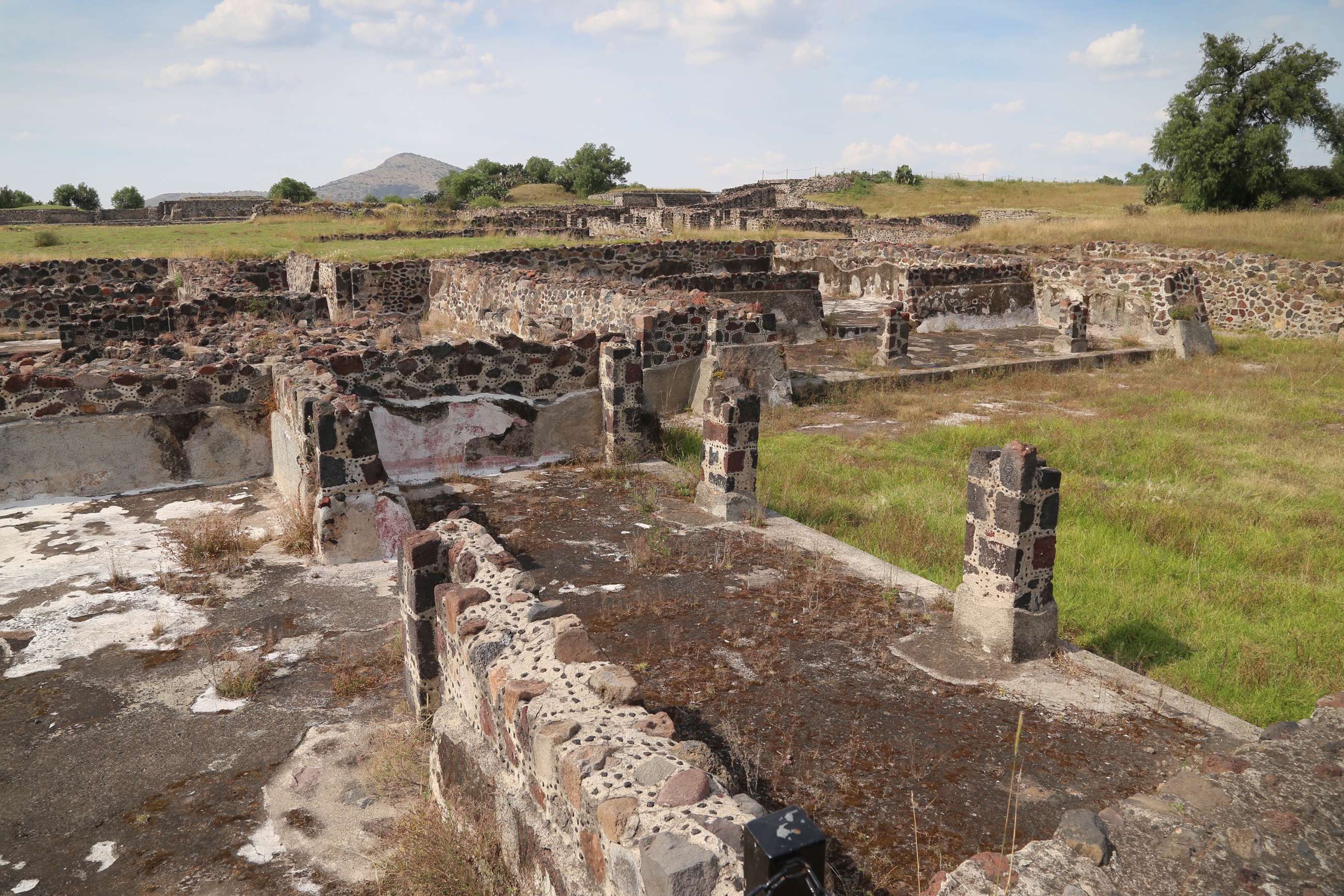 This area of buildings is just to the west of the Pyramid of the Sun.

Archeologists believe construction of Teotihuacan began before Christ. A concentration of people is believed to have lived in that area of Mexico as early as 300 B.C., and Teotihuacan reached its zenith between the 1st and 7th centuries A.D., when researchers believe it was abandoned, possibly after being razed by fire or as the result of an internal political uprising. 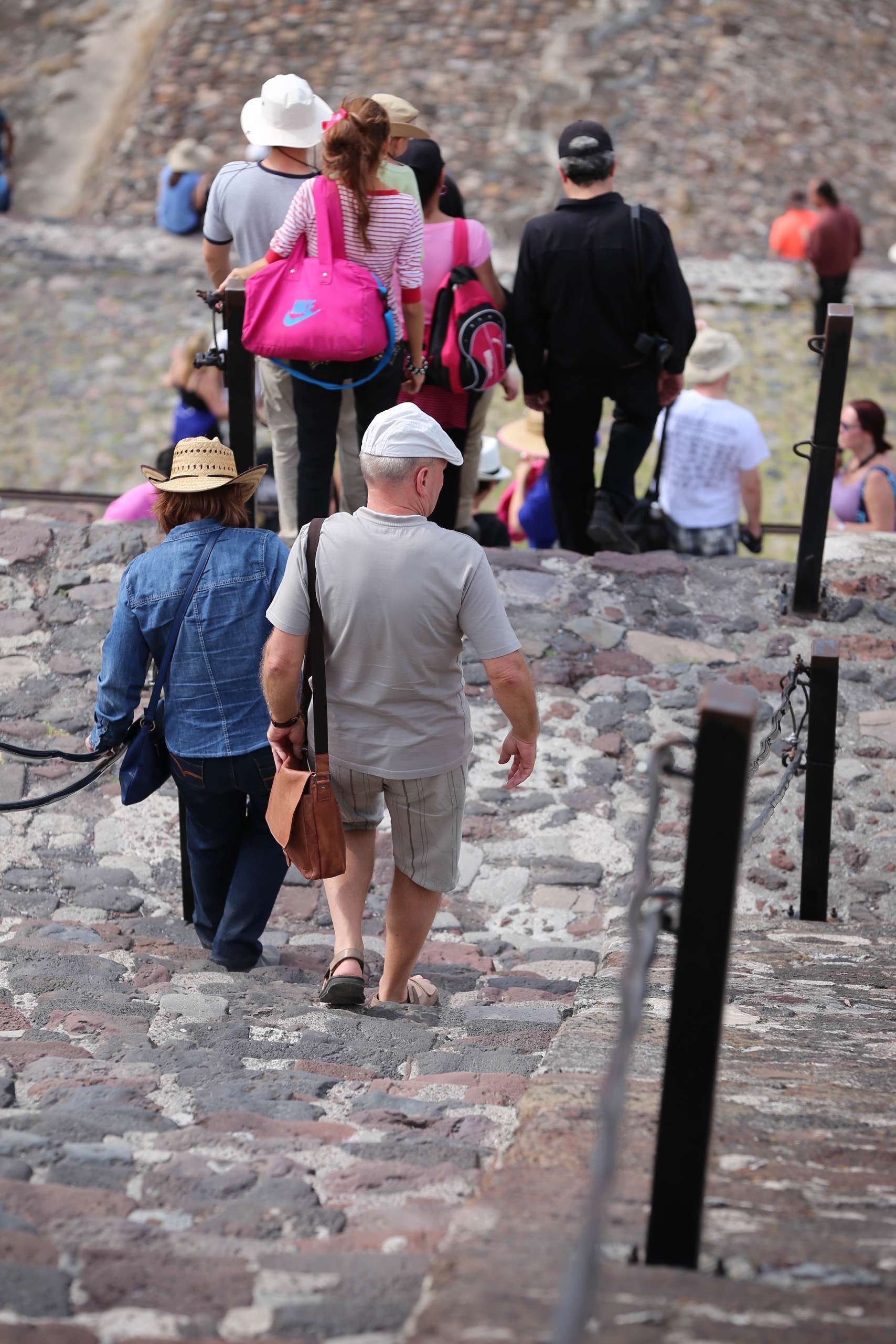 The climb to the top of the Pyramid of the Sun is steep and so is the descent, so wary visitors use the cables while the sure-footed take in the grandeur.

Mesoamerican culture has a number of defining characteristics. It is one of five places in the world where a system of writing was independently developed. Other elements of the culture include agriculture that transformed a hunter-gatherer society to sedentism, a calendaring system to track the year and seasonal events, and bark paper to write hieroglyphics and pictographs was used. Mesoamericans also used rubber and invented a game with a rubber ball; they practiced a complex religion that worshipped deities and gods, and in the case of Teotihuacan, they built stepped pyramids. 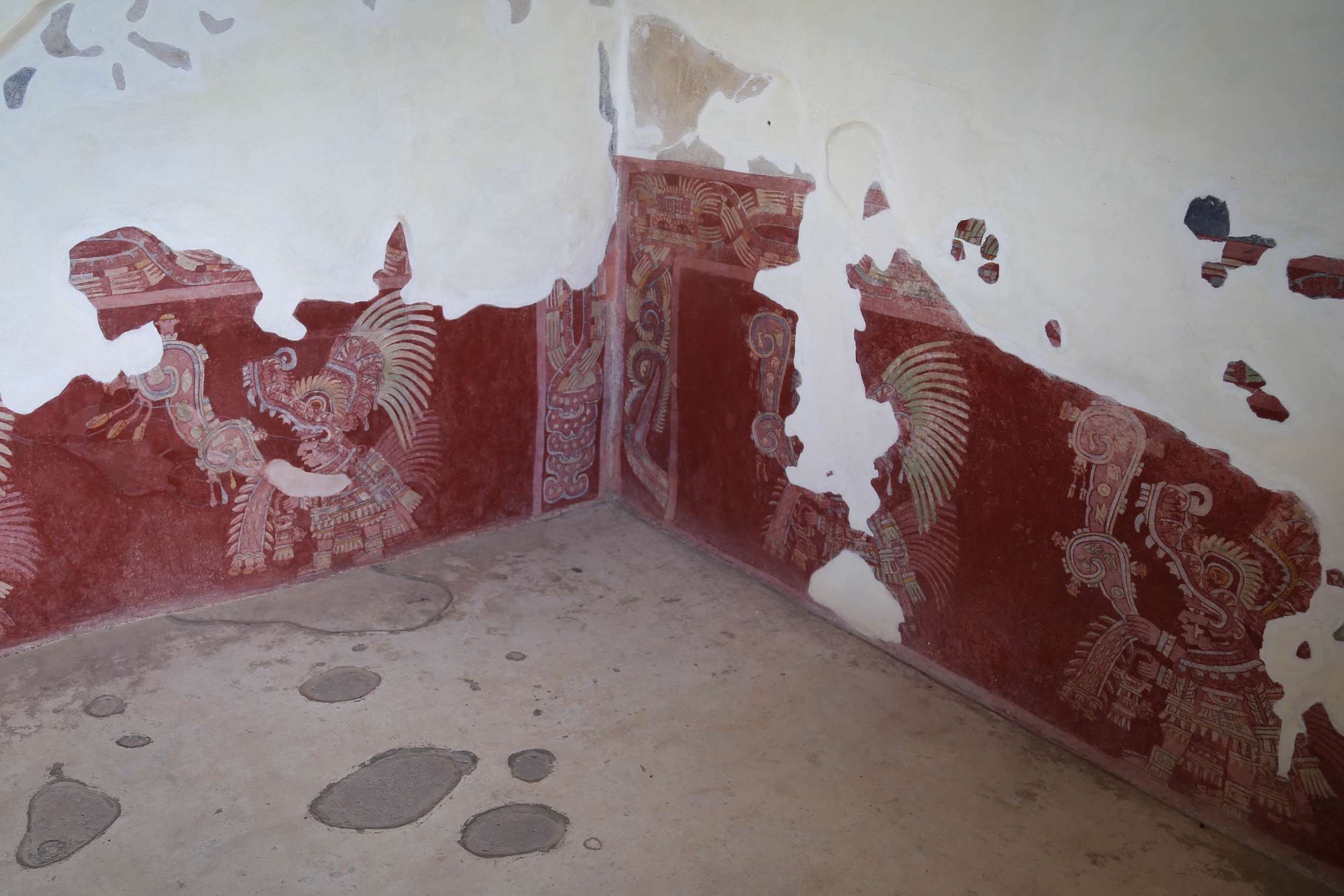 Scientists believe the walls in this home were covered with pictographic art that told stories of the gods and deities at Teotihuacan. 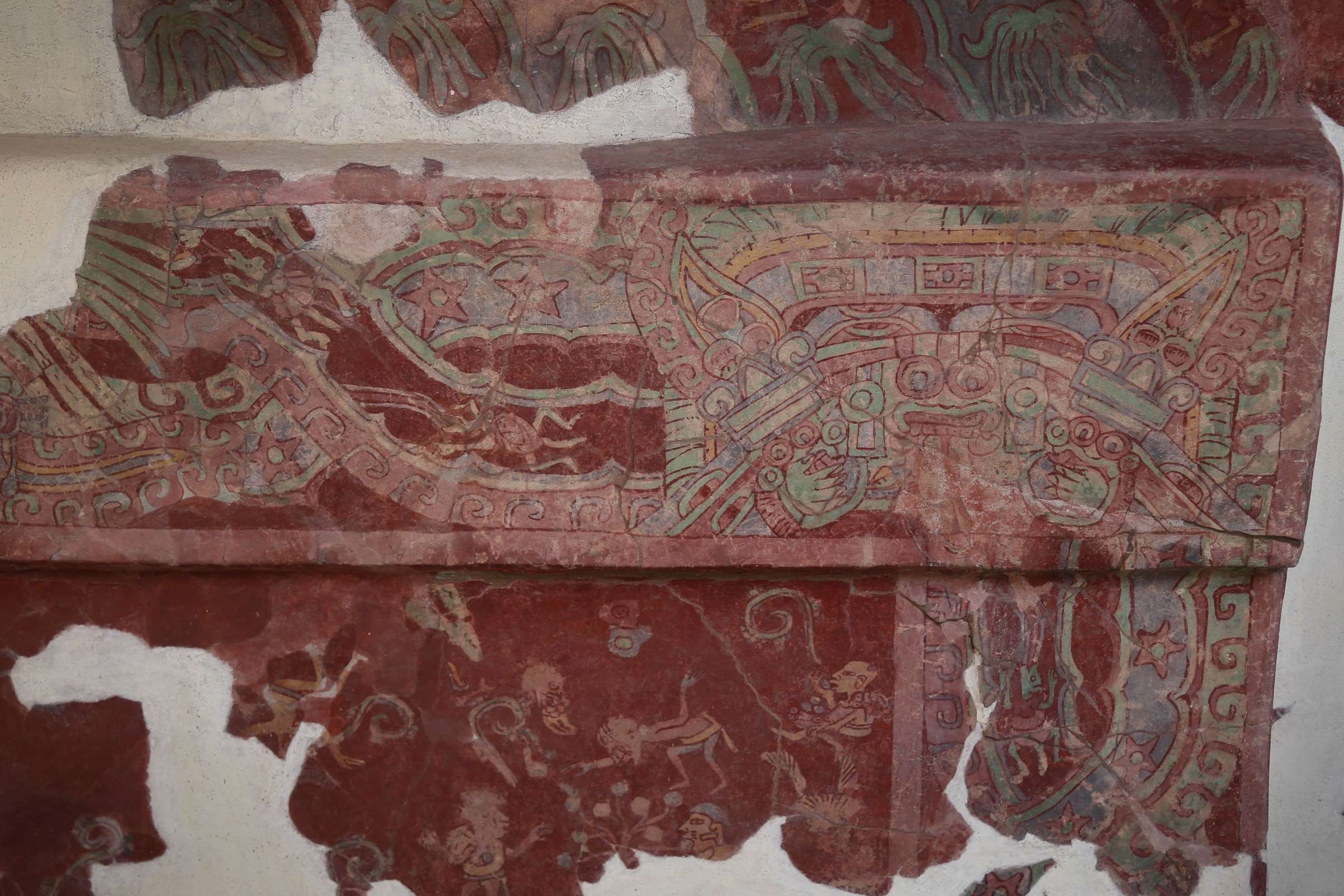 Parts of the fresco work from these walls were purchased in the 1960’s and ended up at a museum in San Francisco, California. A court decision gave the museum joint custody with the government of Mexico. This is representative of some of that work.

In its heyday, Teotihuacan encompassed just under 14 square miles, and to date less than 10 percent of the area has been excavated. 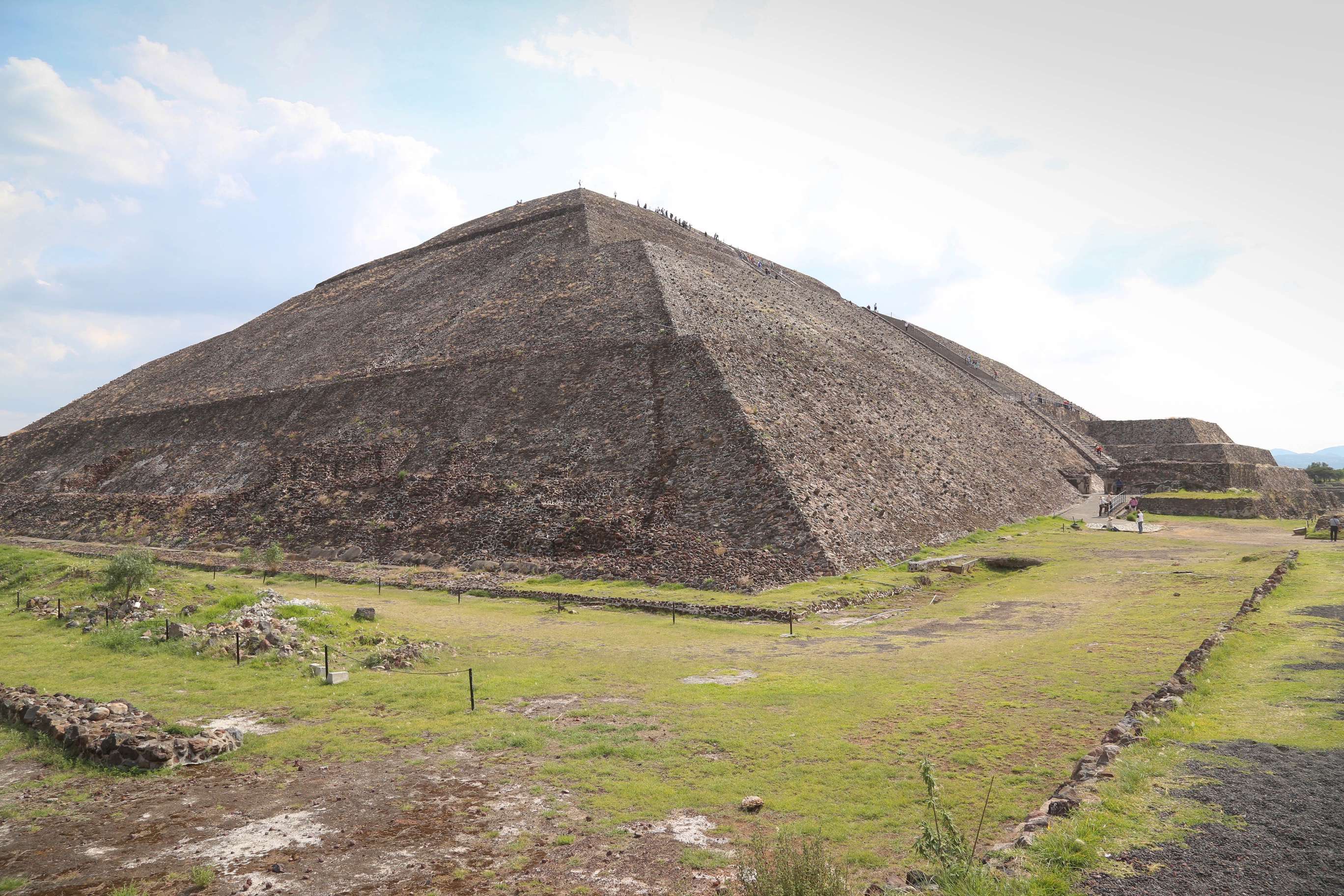 Teotihuacan’s Pyramid of the Sun is one of the most popular places to visit and people carefully climb the steep stairs for a view at the top.

The Pyramid of the Sun (also named by the Aztecs) was the largest pyramid in ancient Mesoamerica and is the third largest pyramid in the world. The base width and length are 720 feet by 760 feet, respectively, and Teotihuacan has a height of 216 feet (243 steps from bottom to top), with a total volume of 1,549,697 square yards. 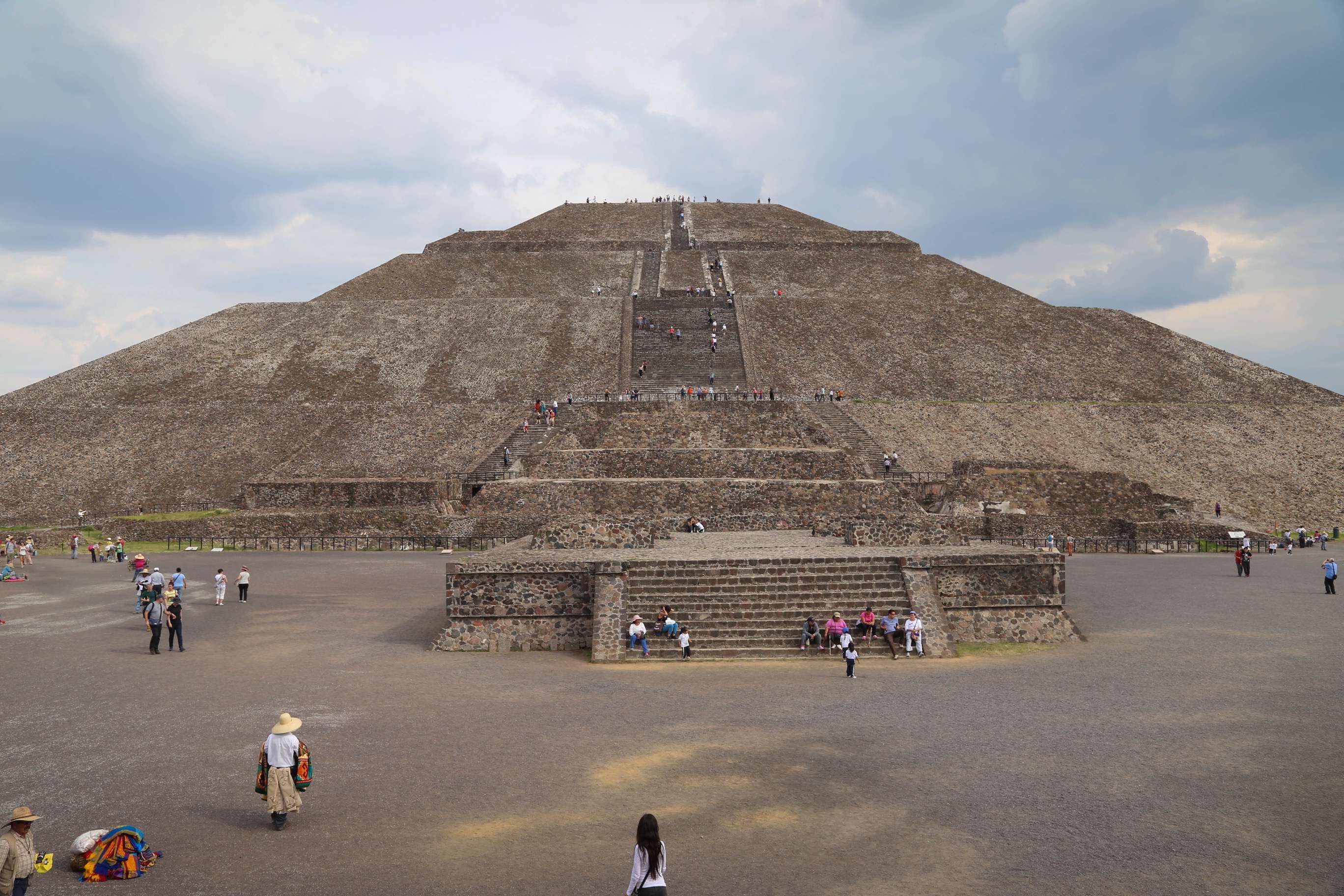 Teotihuacan’s Pyramid of the Sun stands as the central element at the complex whose builders — and demise — remain a mystery.

Teotihuacan was first excavated starting in 1884 by Leopoldo Batres, now criticized by archeologists for his work at the Pyramid of the Sun because he removed some elements of the pyramid and added a steep level at the top. 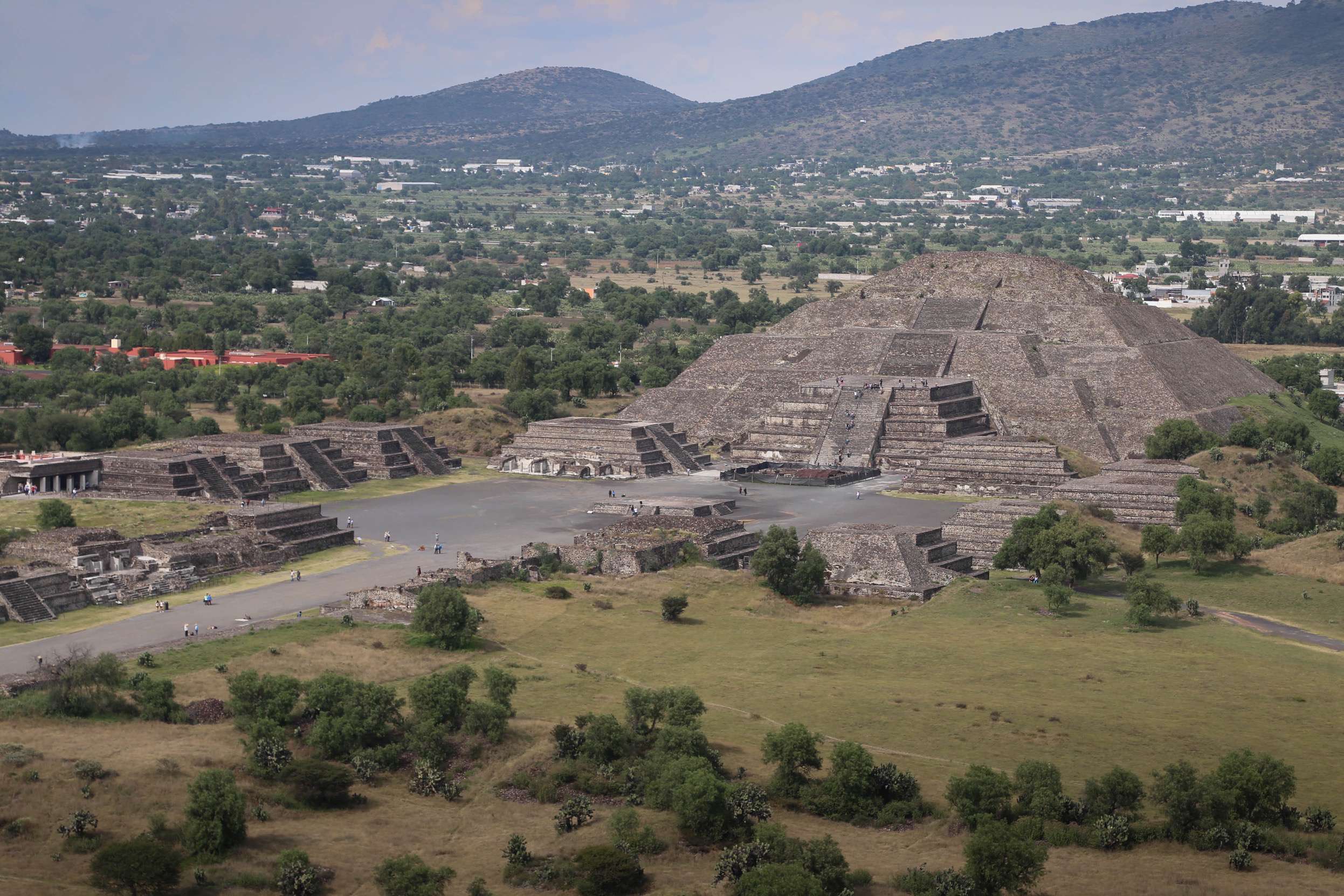 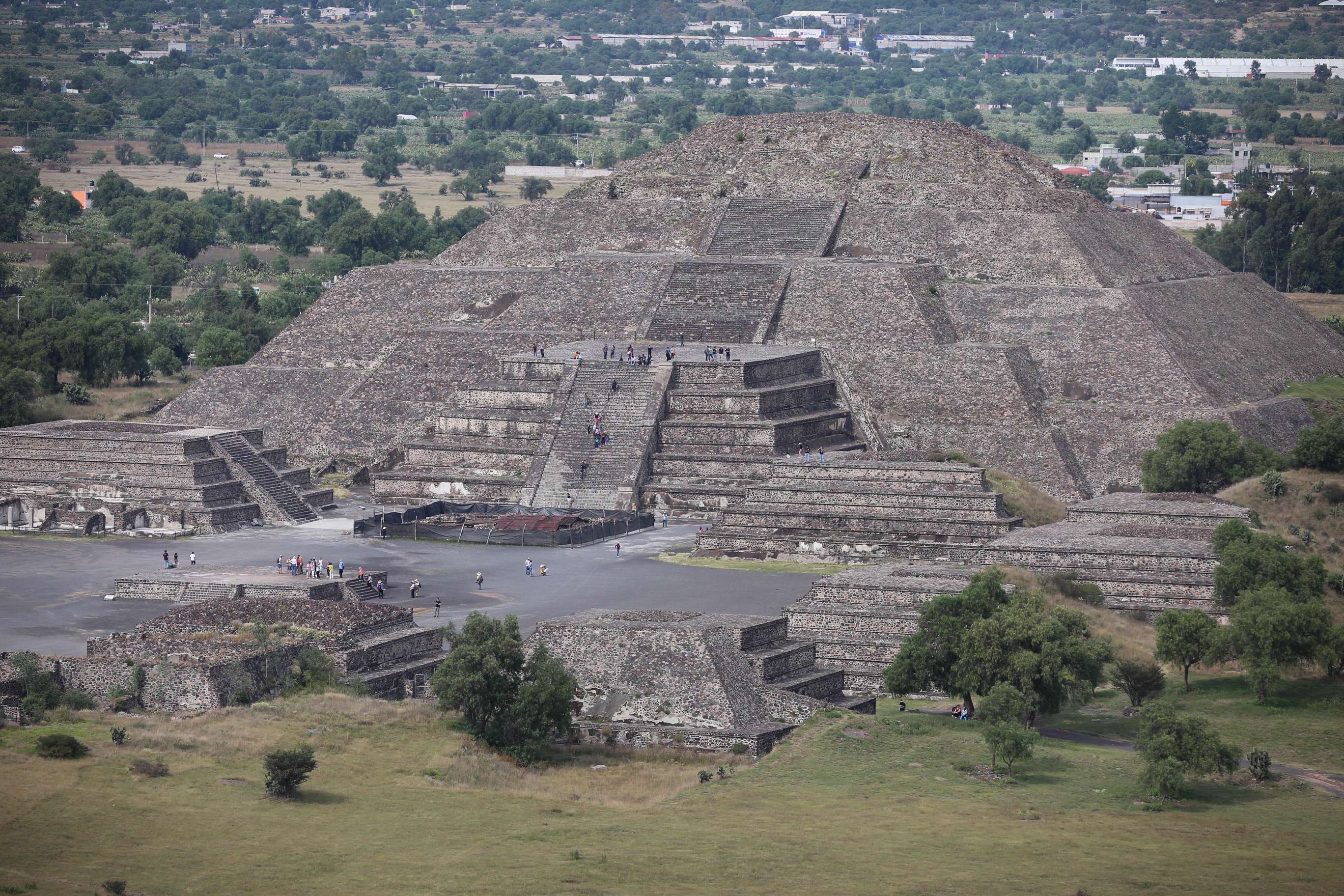 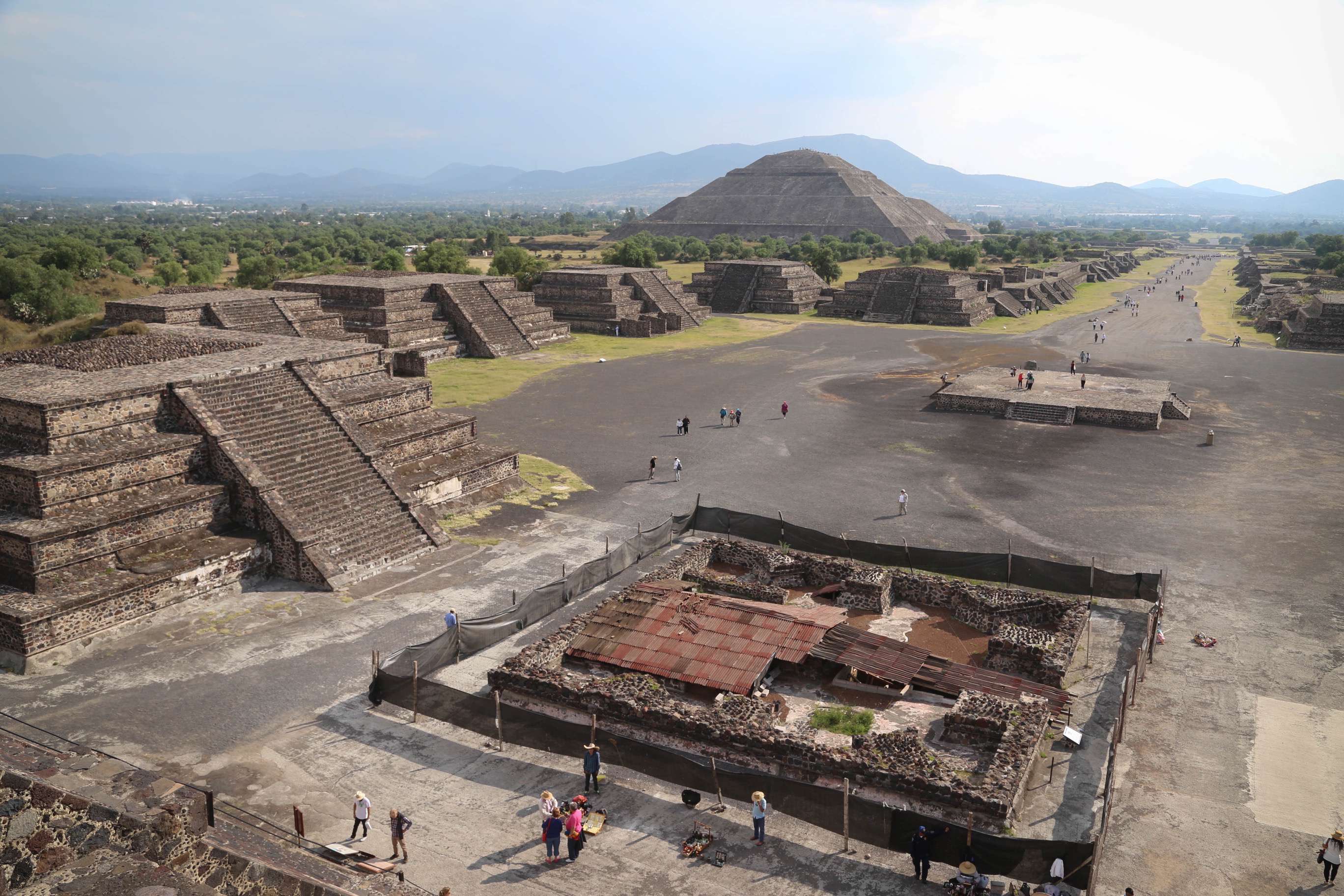 From the top of the Pyramid of the Moon, an excavation site in the foreground shows ongoing researcher. The Avenue of the Dead runs off to the right, the Pyramid of the Sun looms in the background and some of the building at Teotihuacan are arrayed along the boulevard.

While we may never discover who built Teotihuacan, who lived there, or why the civilization failed, Teotihuacan is nonetheless a source of wonder for the nearly 3,000,000 people who visit every year and is a great source of pride for Mexico and her people. 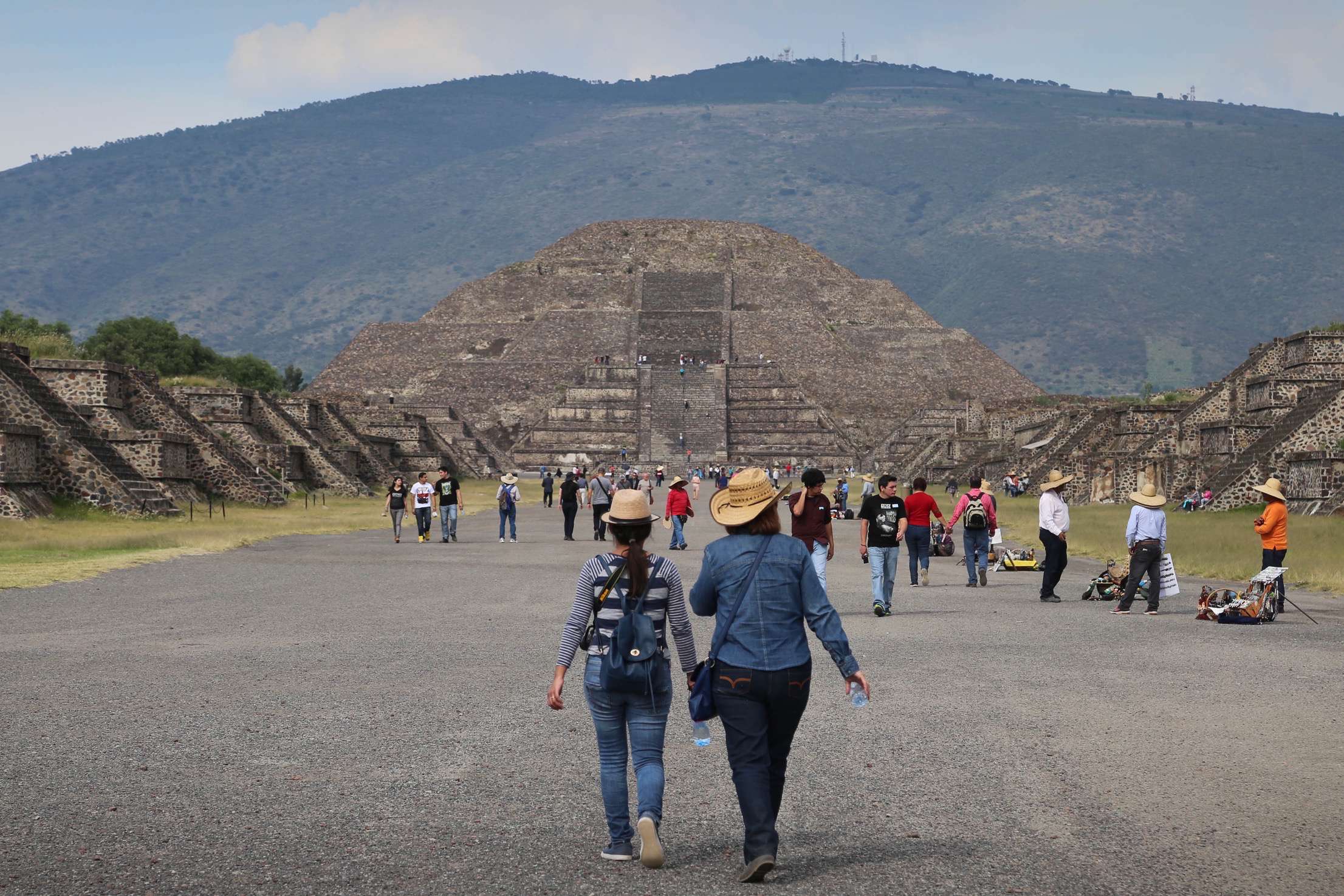 Visitors stroll along the Avenue of the Dead on their way to inspect the Pyramid of the Moon as a gauntlet of vendors, right, wait to hawk trinkets.

And Teotihuacan is lasting proof that whatever happened to the people who built the site and once lived there, it will always be a place of greatness. 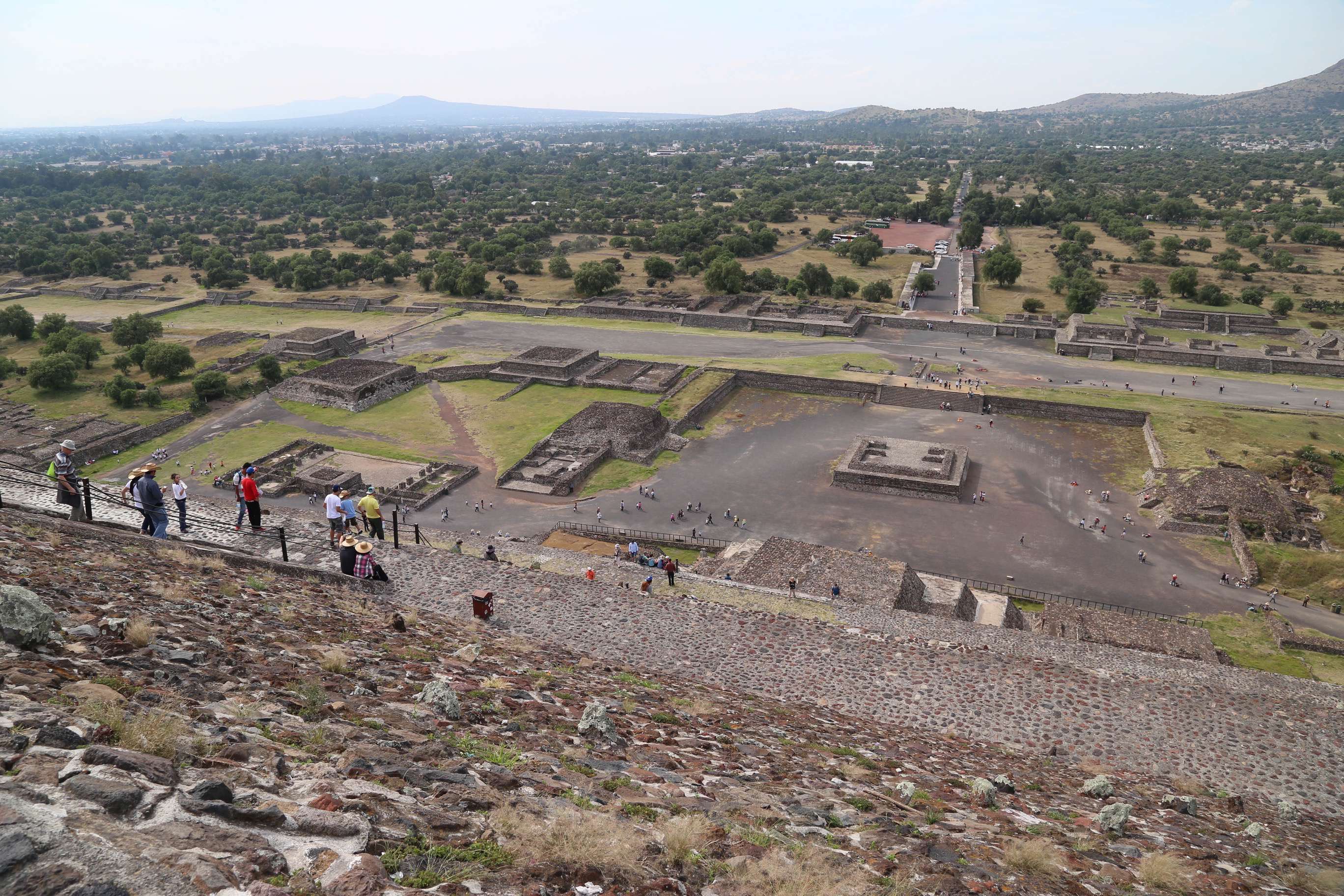 Who built Teotihuacan and what happened to the people are just some of the reasons archeologists keep searching for answers.

For more information about Teotihuacan click to these websites: