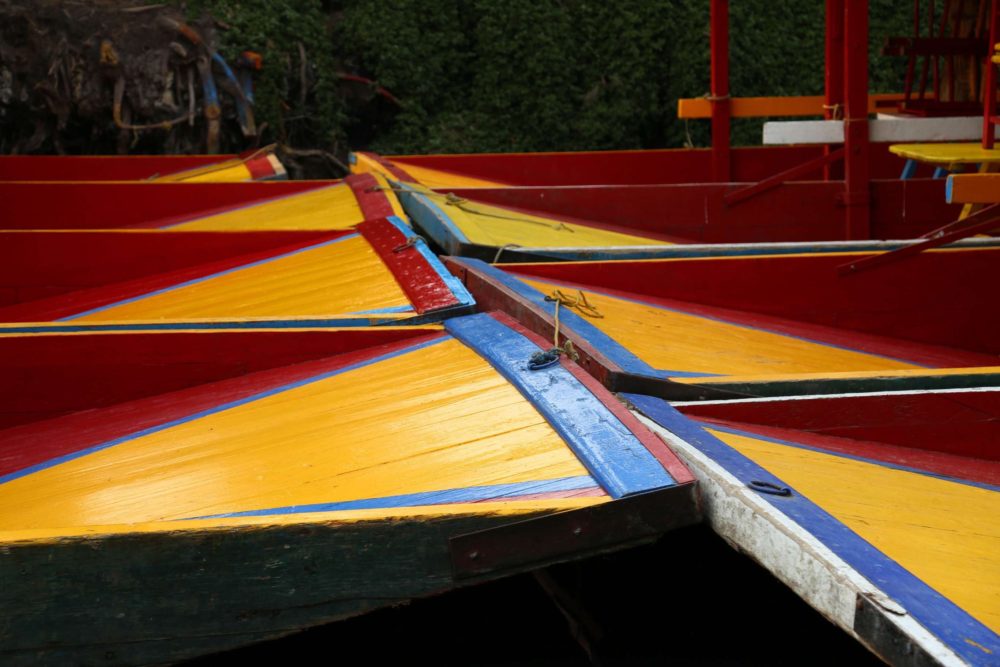 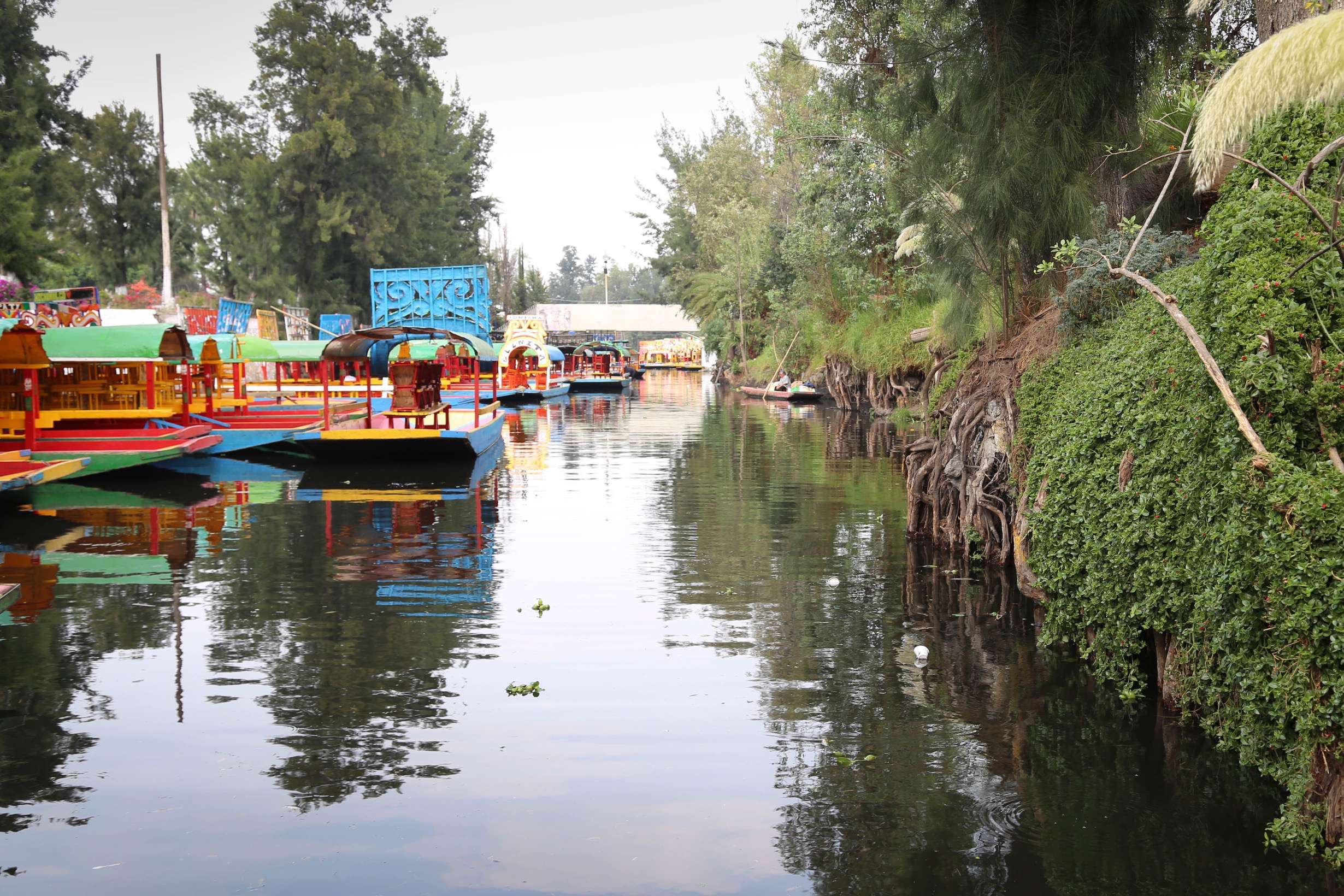 On weekends the trajineras are full along the canals at Xochimilco as visitors relax and while away an afternoon. 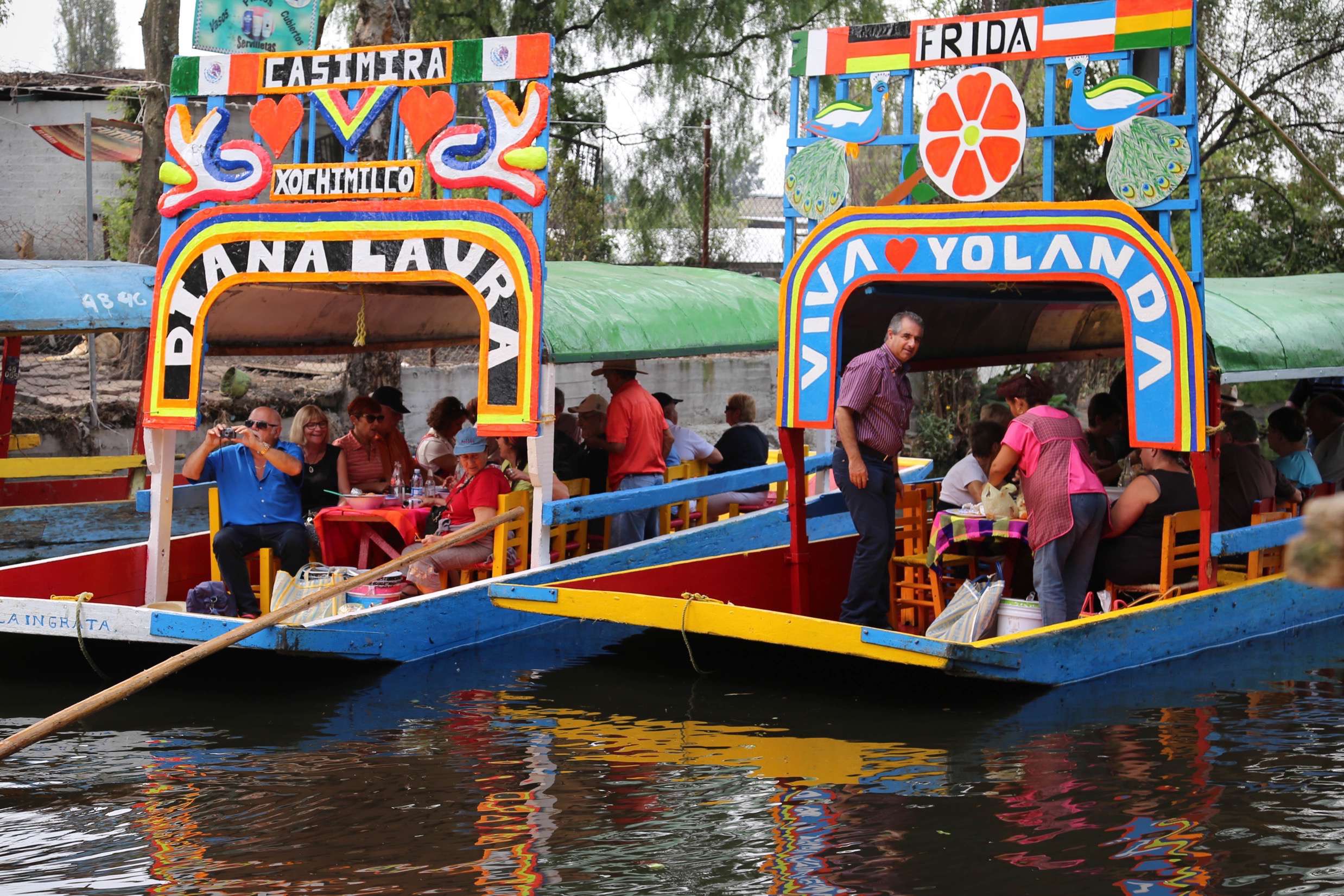 The flat-bottomed boats are an ideal way to enjoy a lunch, drinks and time with friends and family.

Mexico City offers plenty for both locals and visitors to enjoy but perhaps one of the more distinctive experiences would be time spent at Xochimilco where, for hundreds of years, 110 miles of canals that separate floating islands is an enchanting place where people grow flowers, food, and sustain their families. 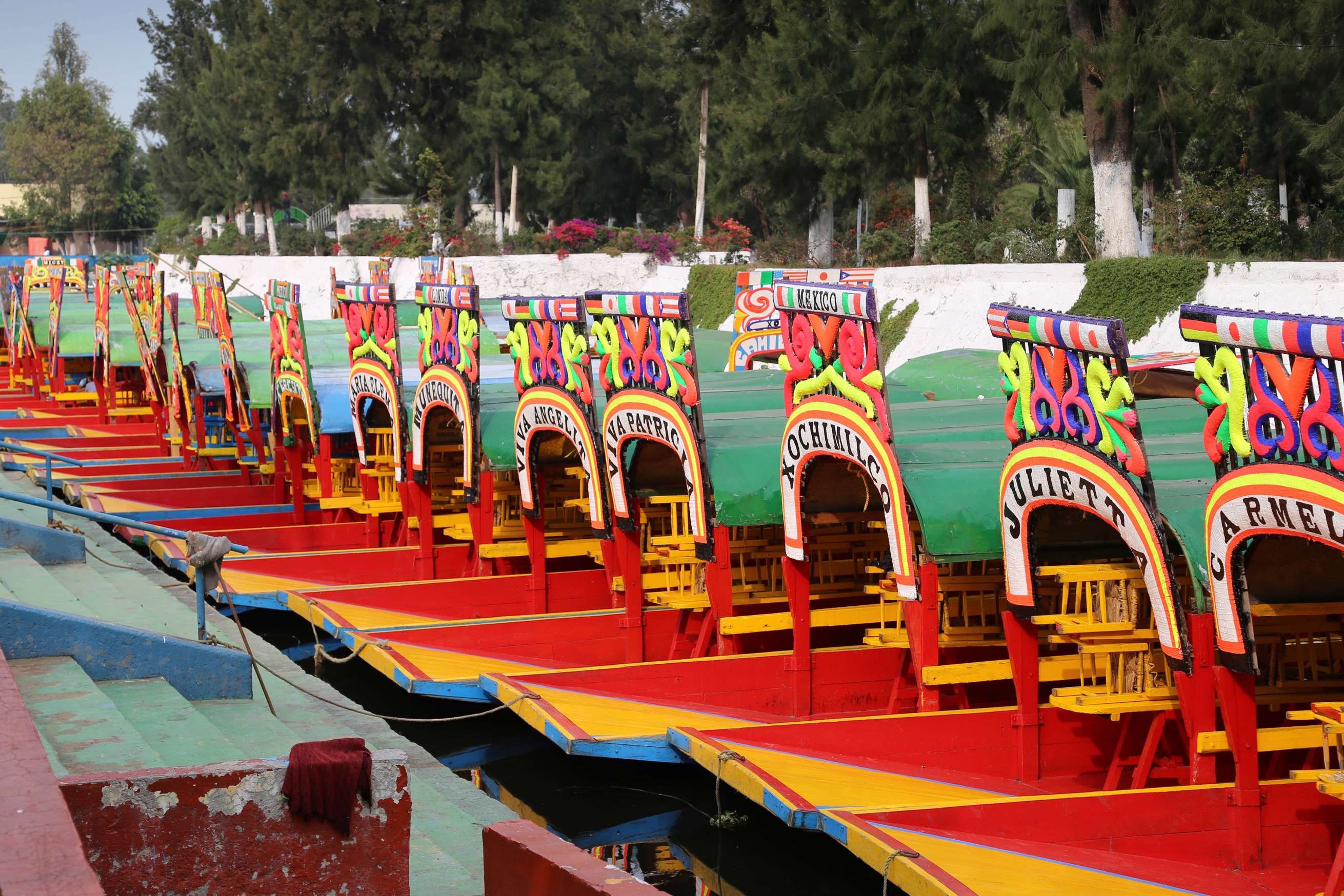 Each of the trajineras is brightly colored and named after someone special. On weekends all the boats will be busy.

Today, this UNESCO World Heritage Site (designated in 1987) is still a popular destination for Mexicans, and an intriguing stop for international visitors. The best way to experience Xochimilco (zo-shi-mil-koh) is by floating along in flat-bottomed boats called “trajinera” that silently glide atop the water powered only by expert operators who propel them with long wooden poles. 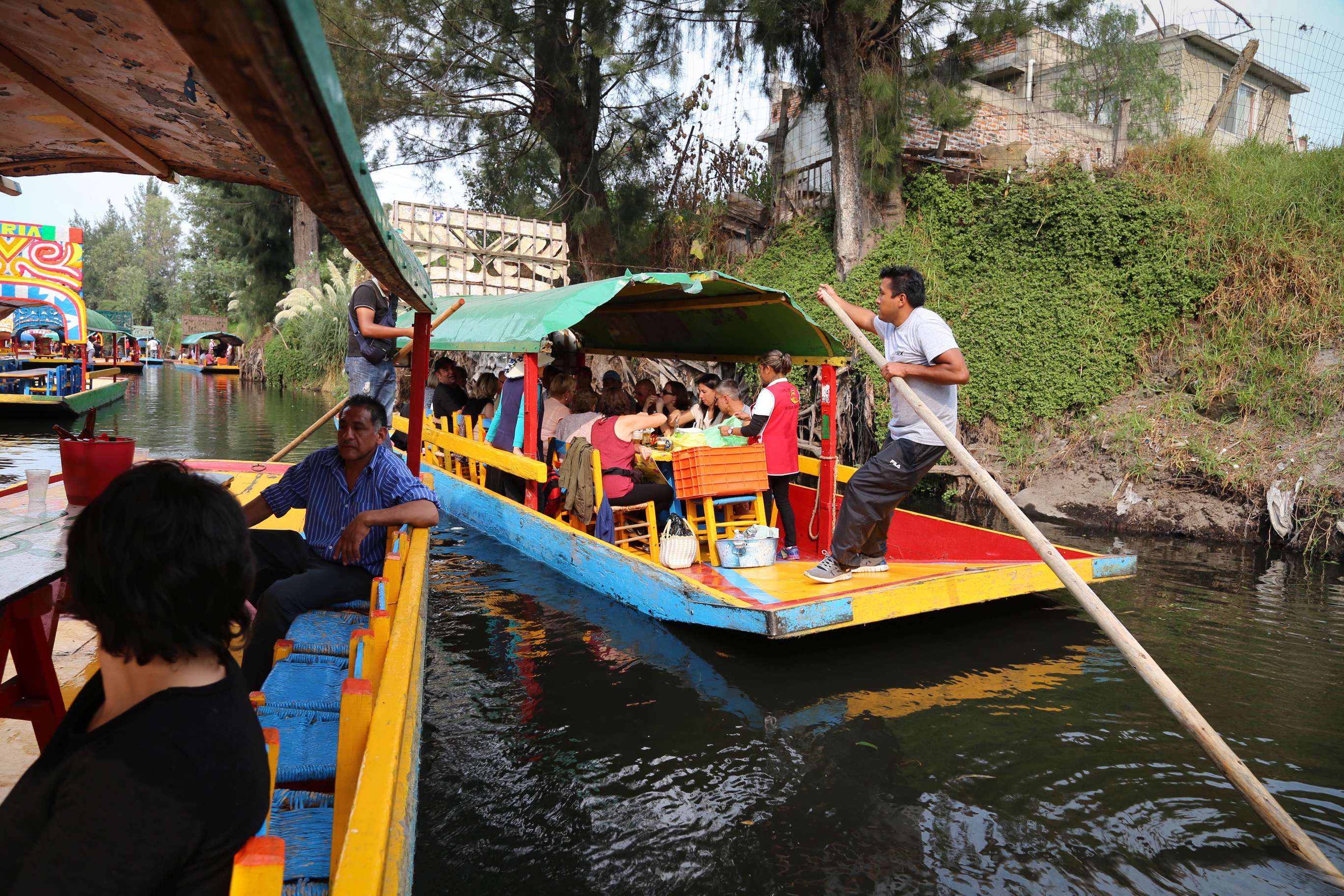 You can only go along the canals at Xochimilco as fast as the ‘captain’ can pole his boat.

The number of trajineras is limited, but on weekends and holidays the canals are jammed with boats and vendors. Colorfully painted to a point approaching gaudy, a ride in one of the boats allow recovery from the hustle and frenetic pace of Mexico City. Each trajinera is given a female name – a child or loved one, special someone, or maybe a well-known celebrity -to attract the attention of customers. 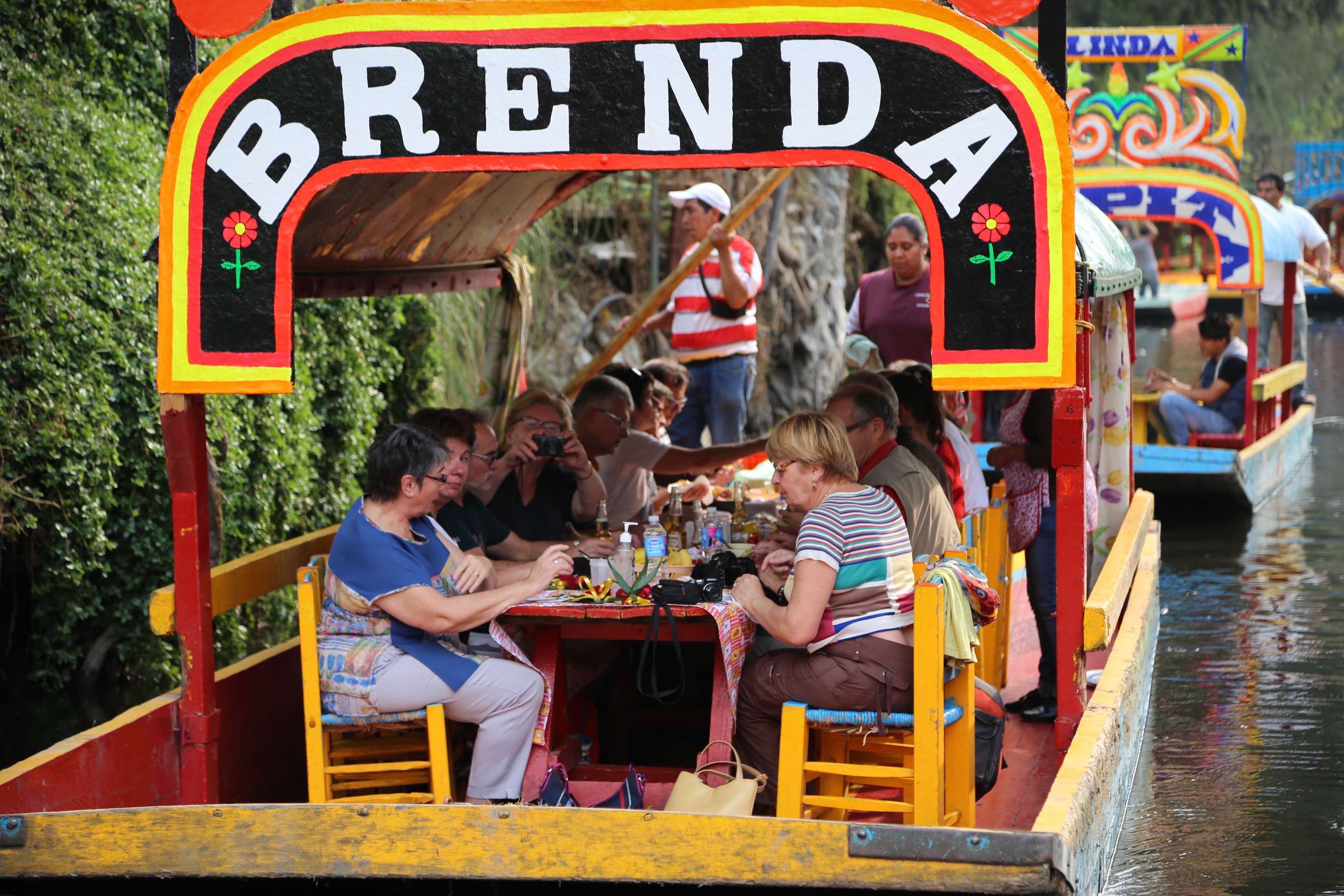 “Brenda” moves a group of friends along the water.

As you drift along, look at the small plots of land, called “chinampas,” close your eyes and realize that people have been living here for hundreds of years, long before the Conquistadors conquered Mexico. 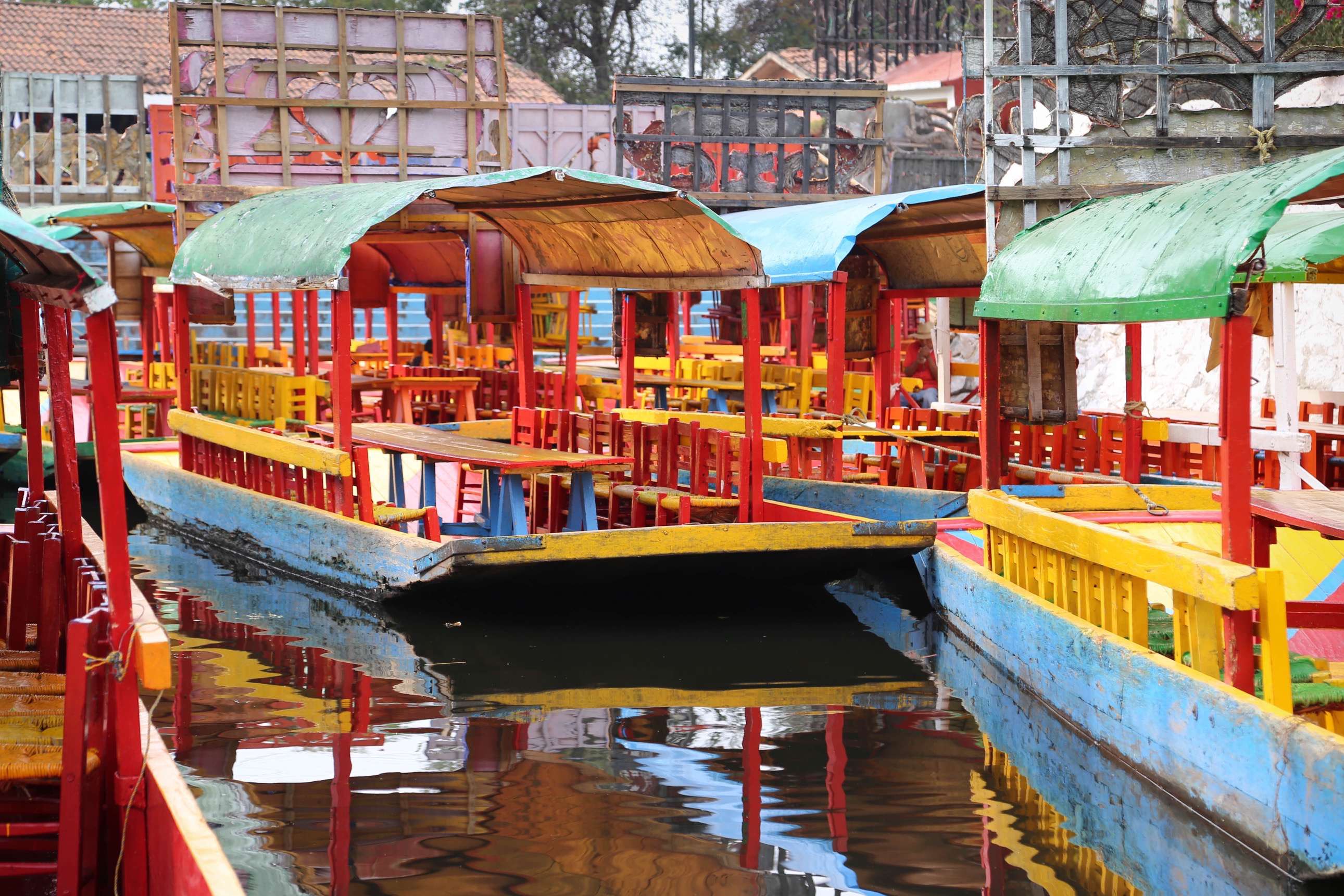 The design of the trajineras are all the same; flat bottom, awning for shade and a table and chairs to sit and enjoy drinks and a meal. 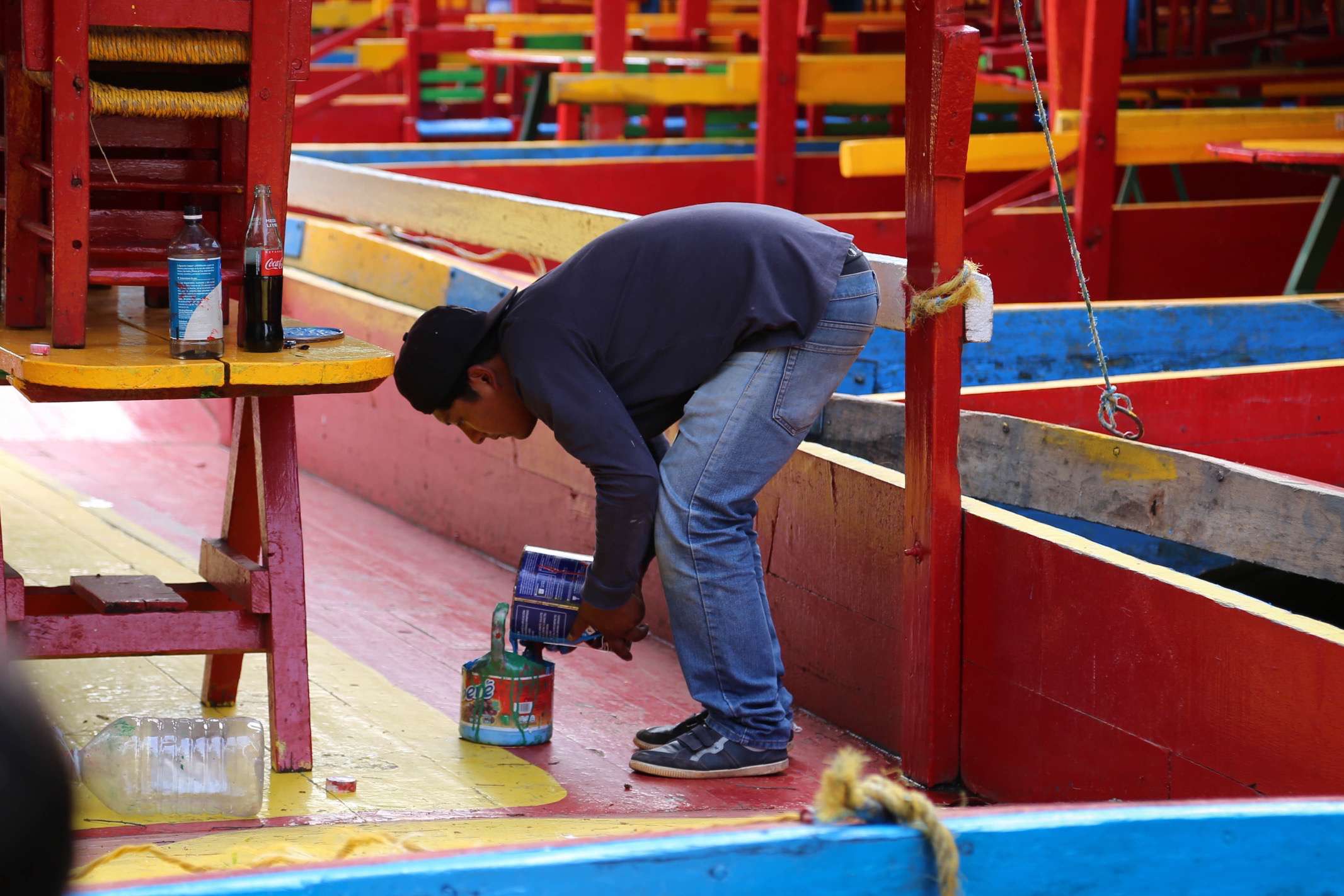 A man readies some paint to apply to his trajinera. 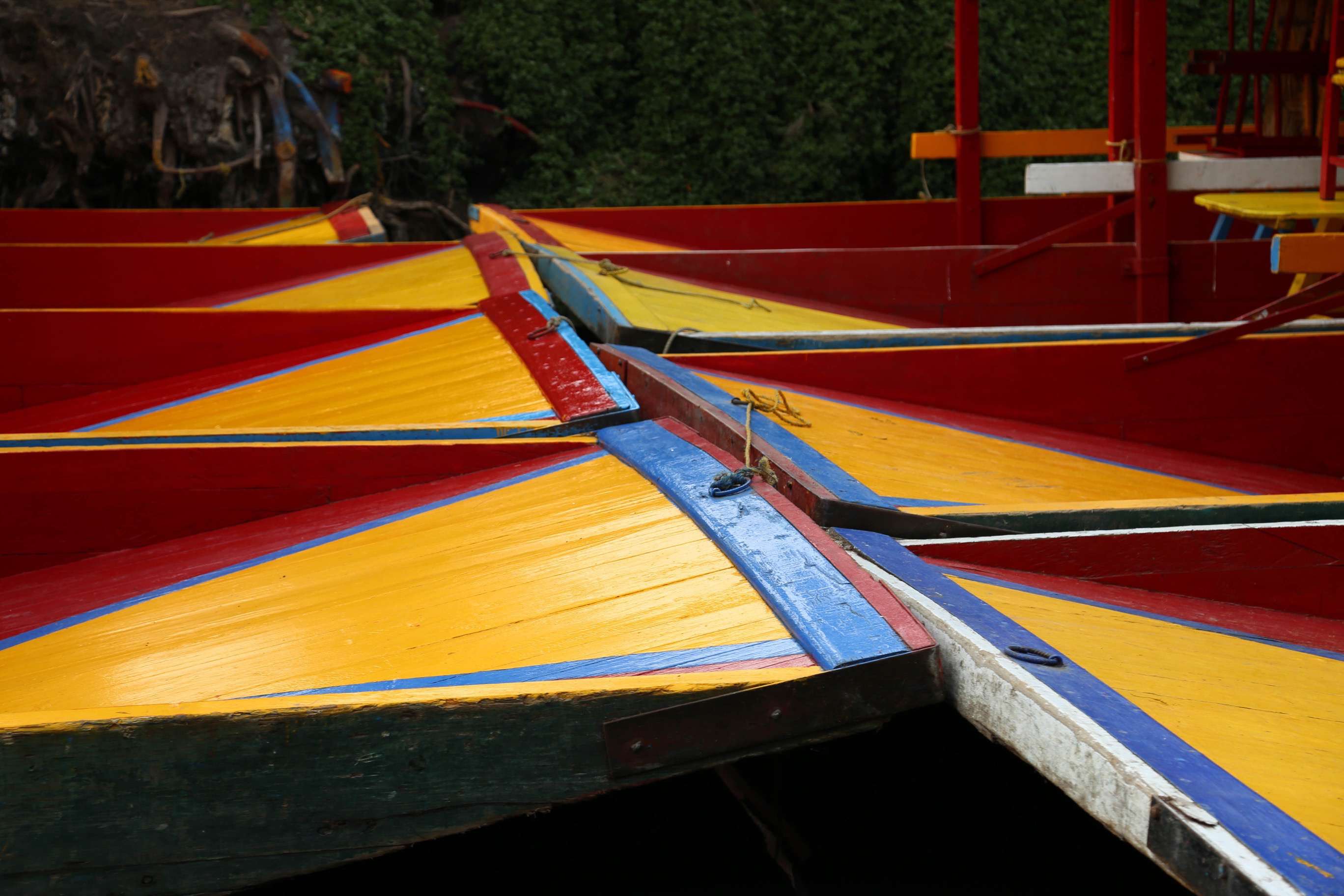 A group of trajineras are idled together at the canals of Xochimilco.

According to the World Heritage Conservation UNESCO website, Xochimilco, “constitutes the only reminder of traditional Pre-Hispanic land-use in the lagoons of the Mexico City basin.” At its height, Xochimilco was a vast network of canals that reached all the way into the center of what is now Mexico City, 28 miles away. 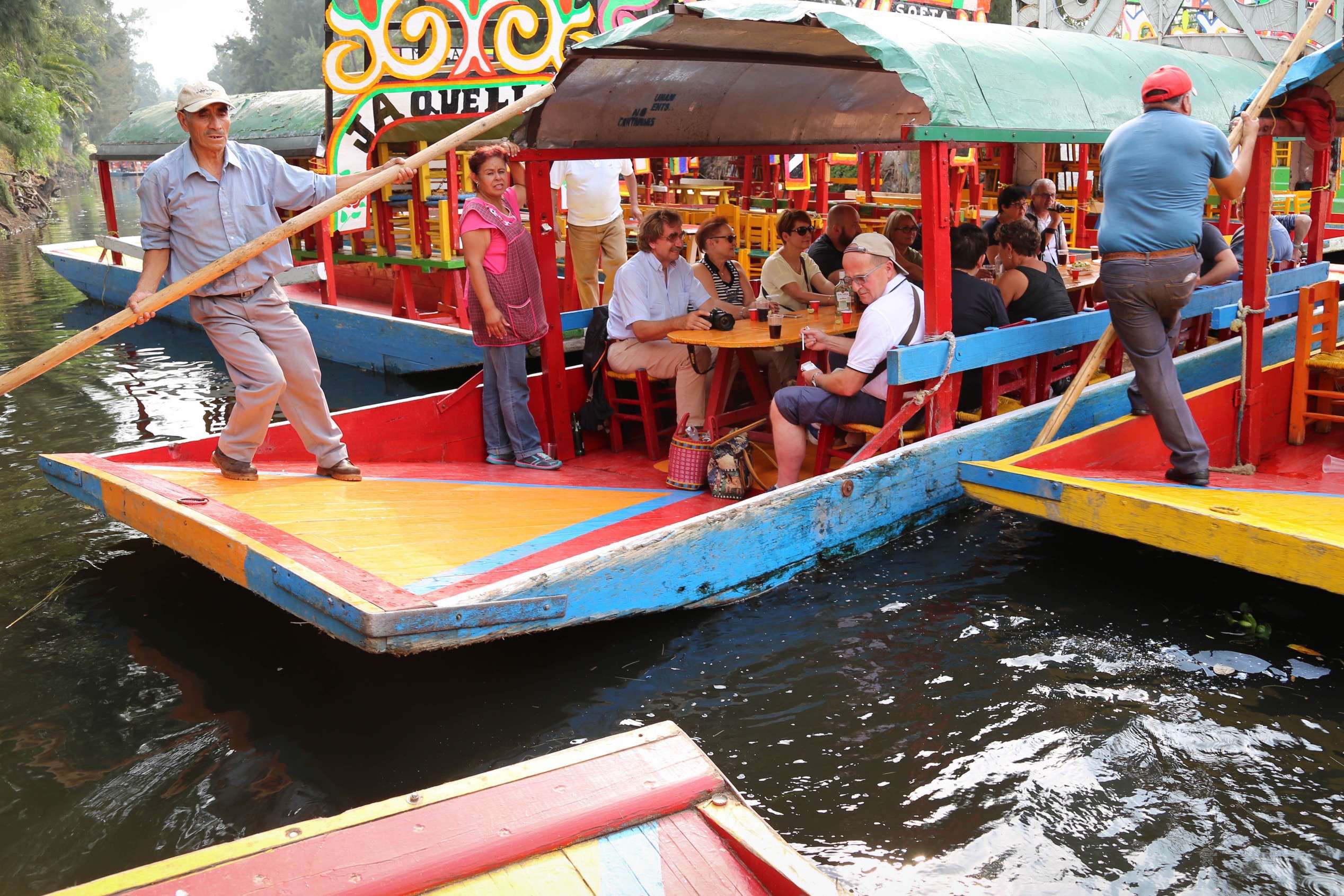 Even on a weekday afternoon, boats must jockey for position along the canals.

But increased population and the urbanization of Mexico City created a huge demand for fresh water. As a consequence, groundwater pumping began drying up the canals of Xochimilco in the 1950s. Even though conservation efforts have been undertaken, UNESCO’s has declared it as a World Heritage Site, and the site remains a popular and profitable tourism destination, the water supply for Xochimilco’s canals continues to be taken at their expense. The native aquatic life is also under stress, including acocil (a freshwater crayfish), and axolotl (a salamander found only in Xochimilco); the introduction of tilapia makes life even more difficult for the native species. 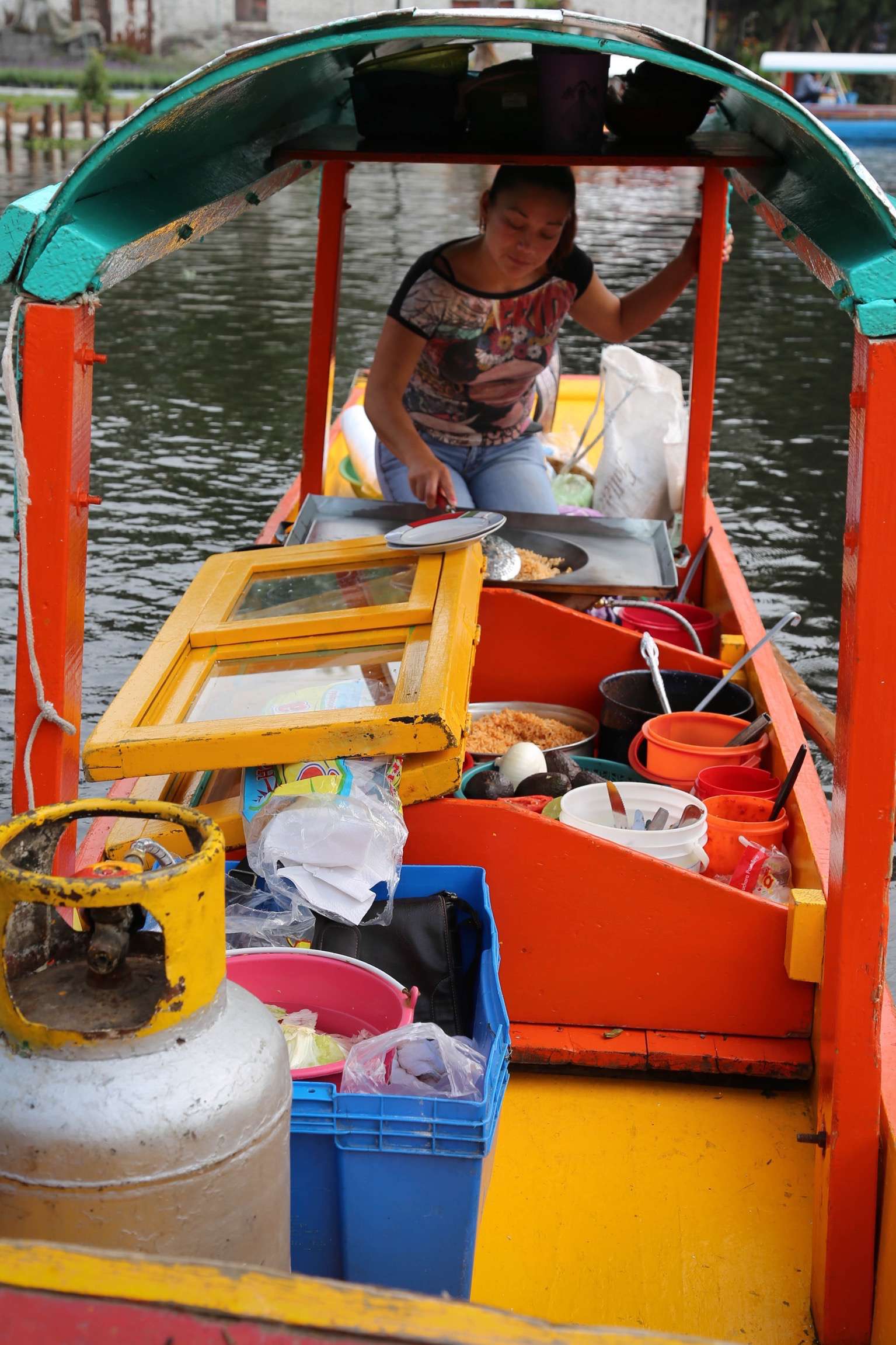 If you did not bring your own food and drinks, vendors are happy to serve a delicious meal as you drift along the water.

Part of what makes Xochimilco a different experience is the transportation by trajineras. Set with a long table in the center surrounded by chairs, the boats become floating dining and party rooms. You can bring your own food and drinks, but if not, your ‘captain’ will gladly hail one of the smaller boats that provide cooked foods, always just a shout away. Orders are quickly filled, passed aboard along with plates and utensils. 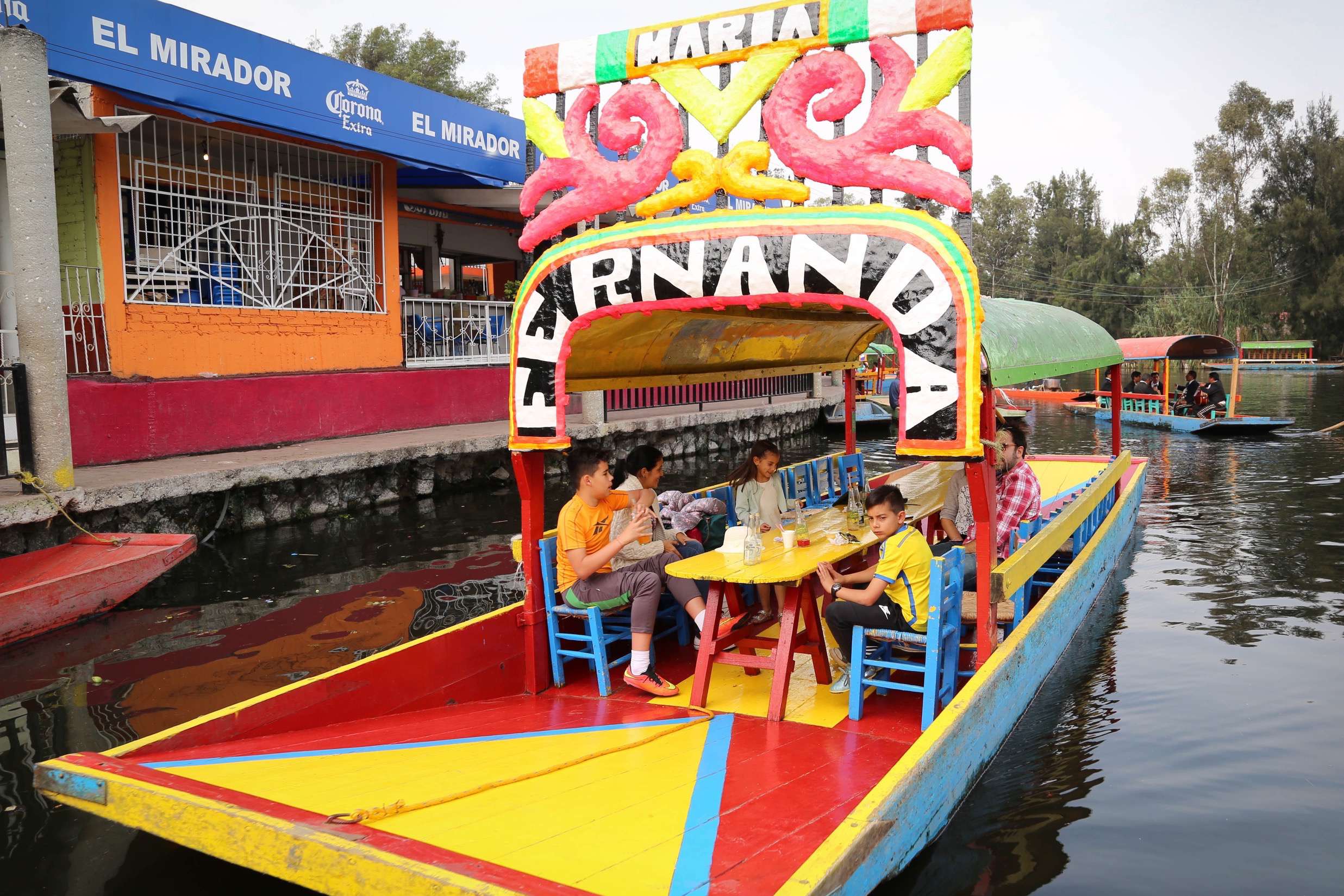 A family enjoys a boat all to themselves on a weekday afternoon.

If you fancy a refreshing drink, then the boat with drinks, cold beer, water or sodas will sidle up to your trajinera and supply what you need. 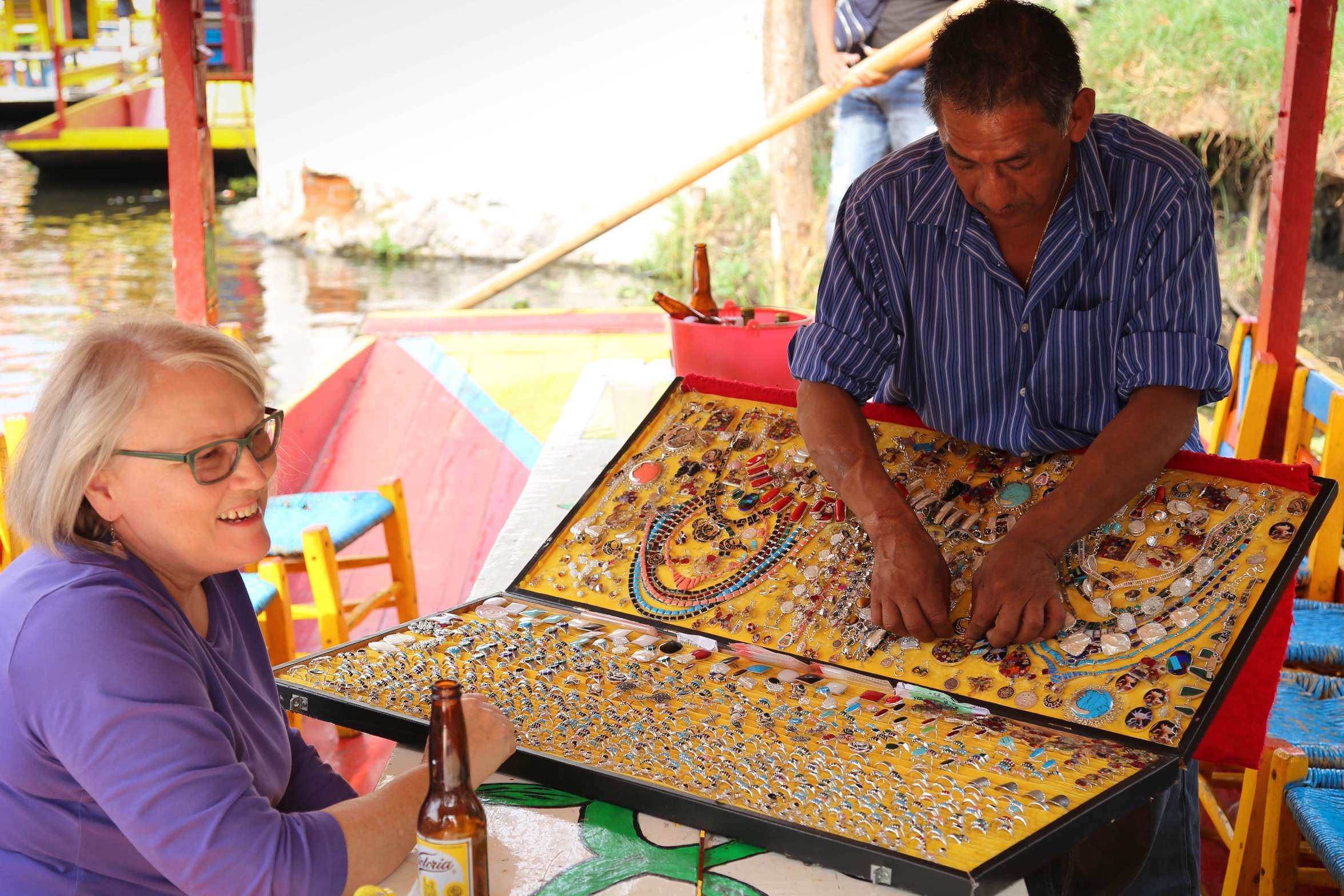 Just because you’re on a boat in the middle of a canal doesn’t mean you can’t do a little shopping. 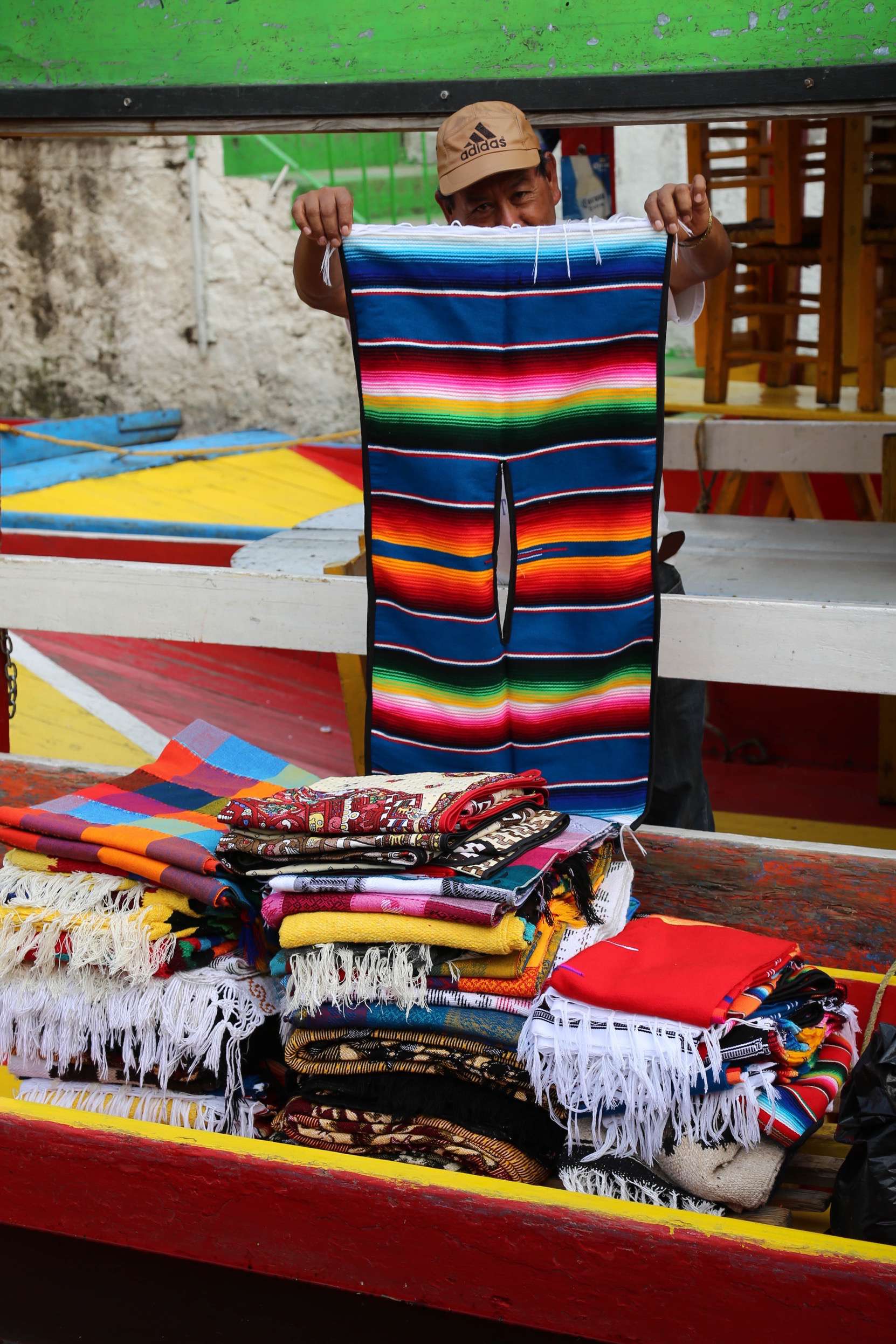 Should you feel a chill in the air or have a sudden urge, you can always buy a serape or a shawl.

Of course, there are a number of mariachi boats ready and willing to either come aboard or tie up alongside and serenade you with songs and ballads. 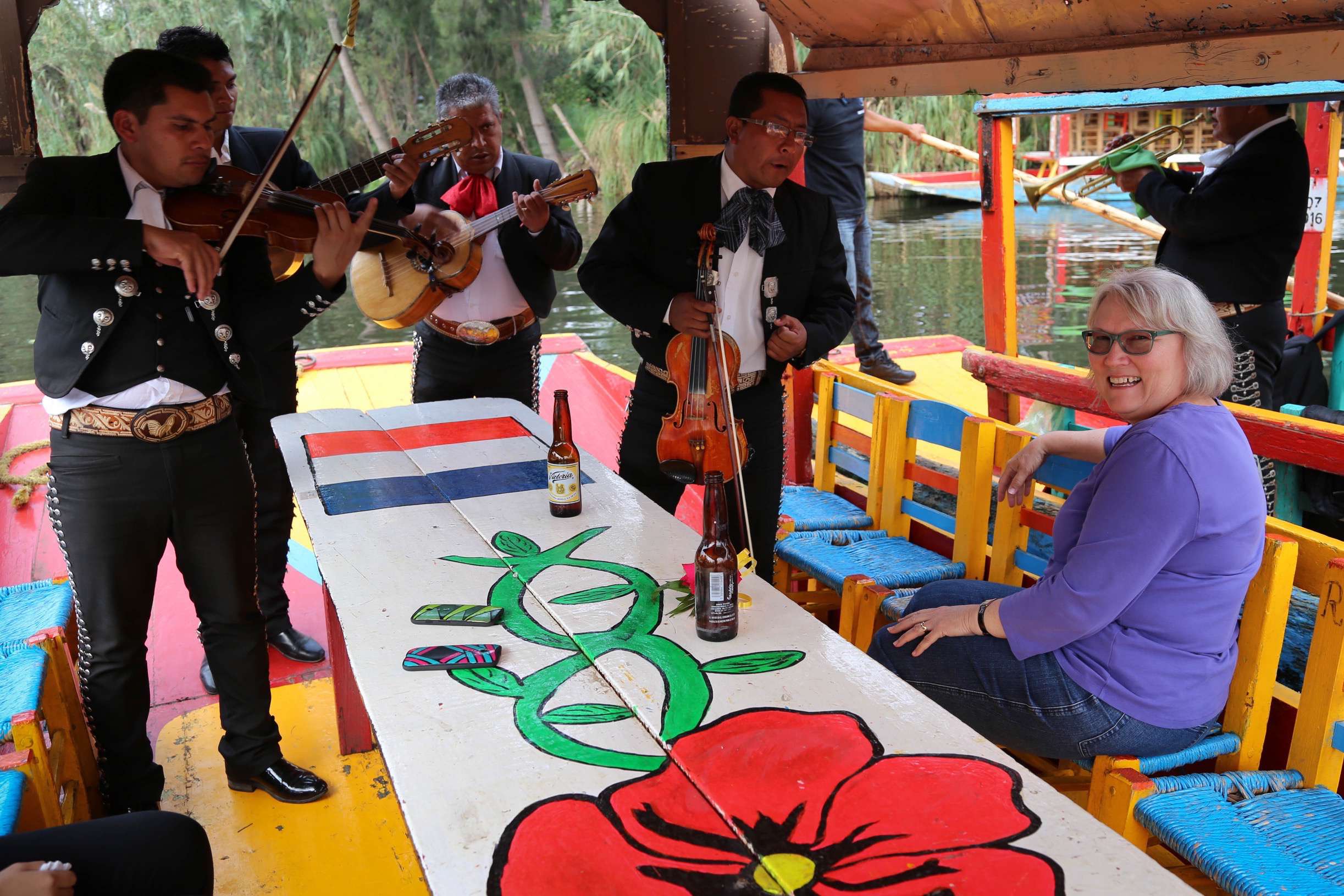 A group of mariachis has come aboard this trajinera to serenade a beautiful woman on her 25th wedding anniversary.

The trajineras are a popular party option for family gatherings, school events and celebrations of all kinds. Part of the fun at Xochimilco is to see and be seen, so there is a great deal of looking over each and every boat to see who’s having the most fun. 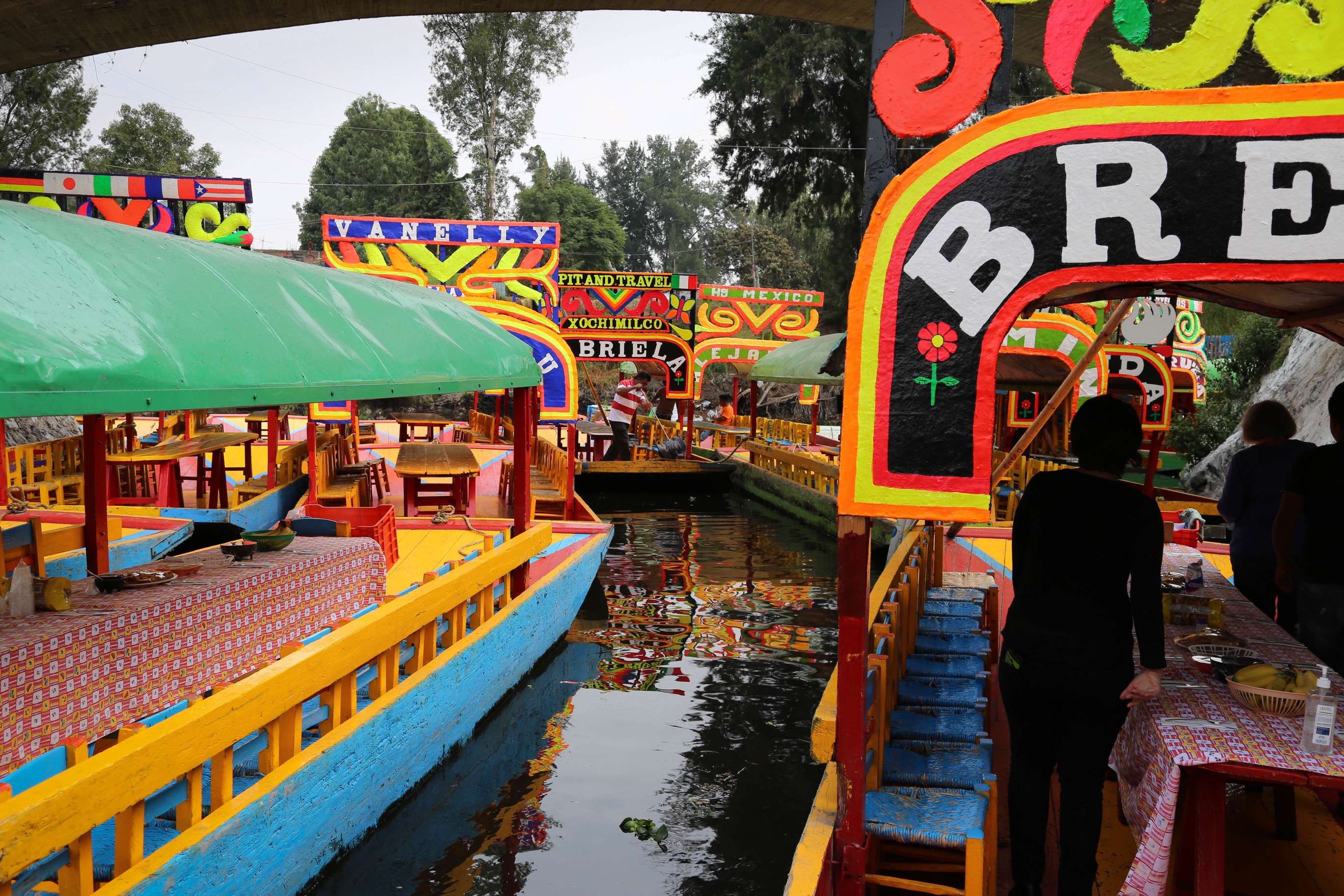 Boats negotiate their way along at the canals of Xochimilco.

There is one spot at Xochimilco that is not a place of smiles. The Island of the Dolls commemorates a tragic moment when a little girl was found drowned in a canal. A man who lived there, by the name of Don Julian Santana Barrera discovered the little girl’s body. 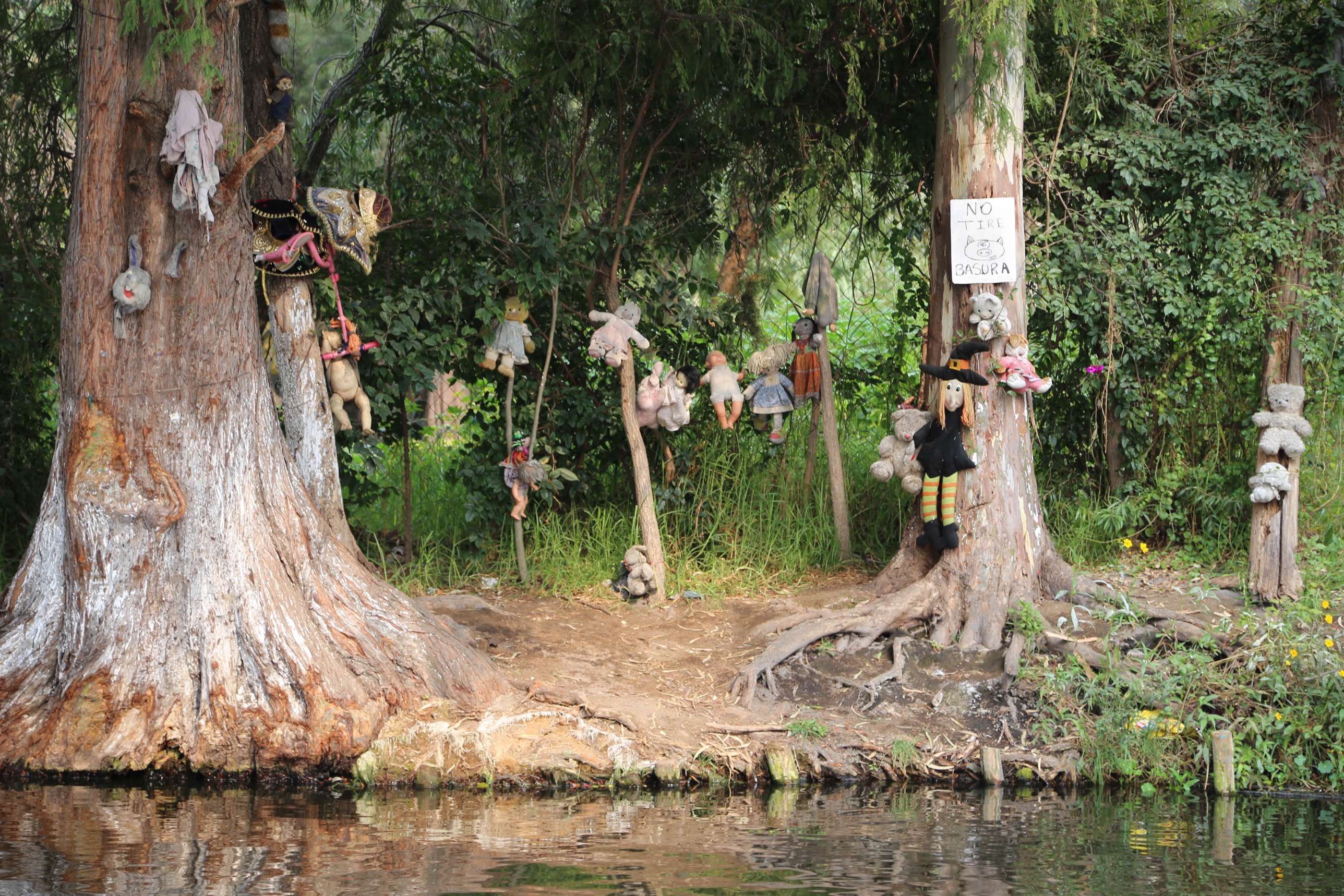 The Island of the Dolls is a reminder of when a little girl drowned and was found at this spot along the canal.

Barrera soon found a small child’s doll floating in the water and believed it belonged to the little girl. He placed the doll in a nearby tree, believing the doll and the area was haunted by the little girl’s soul. Barrera became obsessed with his notions and continued to collect dolls and place them there, in the hopes he could assuage the spirit of the drowned child. After approximately 50 years of collecting dolls, Barrera died in 2001, and he was found very close to the spot where the little girl had drowned. Today, the Island of the Dolls is one of the best-known spots at Xochimilco. 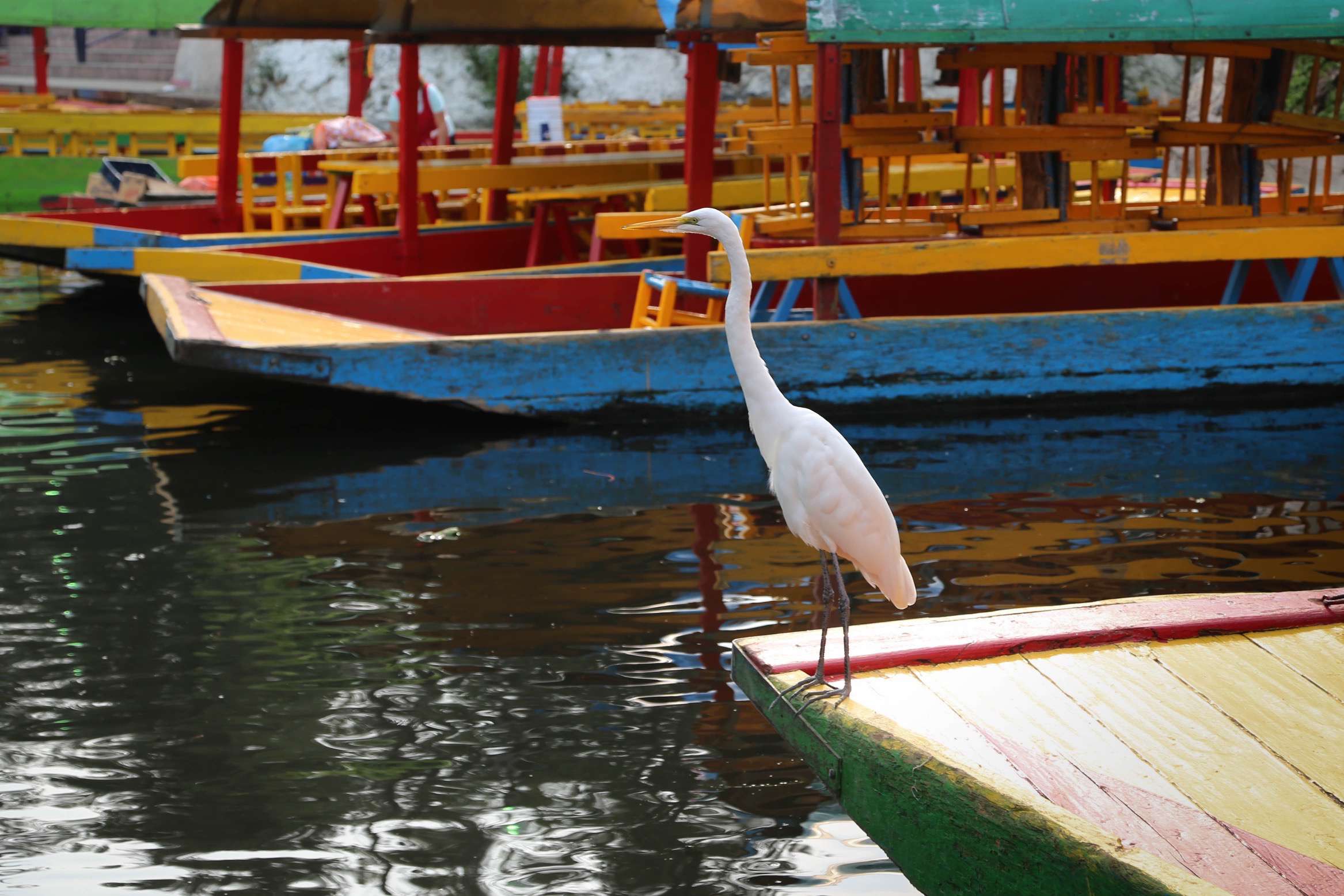 A bird patiently waits for a small fish to surface from the water at Xochimilco.

And Xochimilco also serves as one of the most popular places for Mexico City residents to come and buy fresh flowers, and live plants which are grown on many of the chinampas islands. A number of greenhouses and plant nursery growing operations can be seen from the canals. 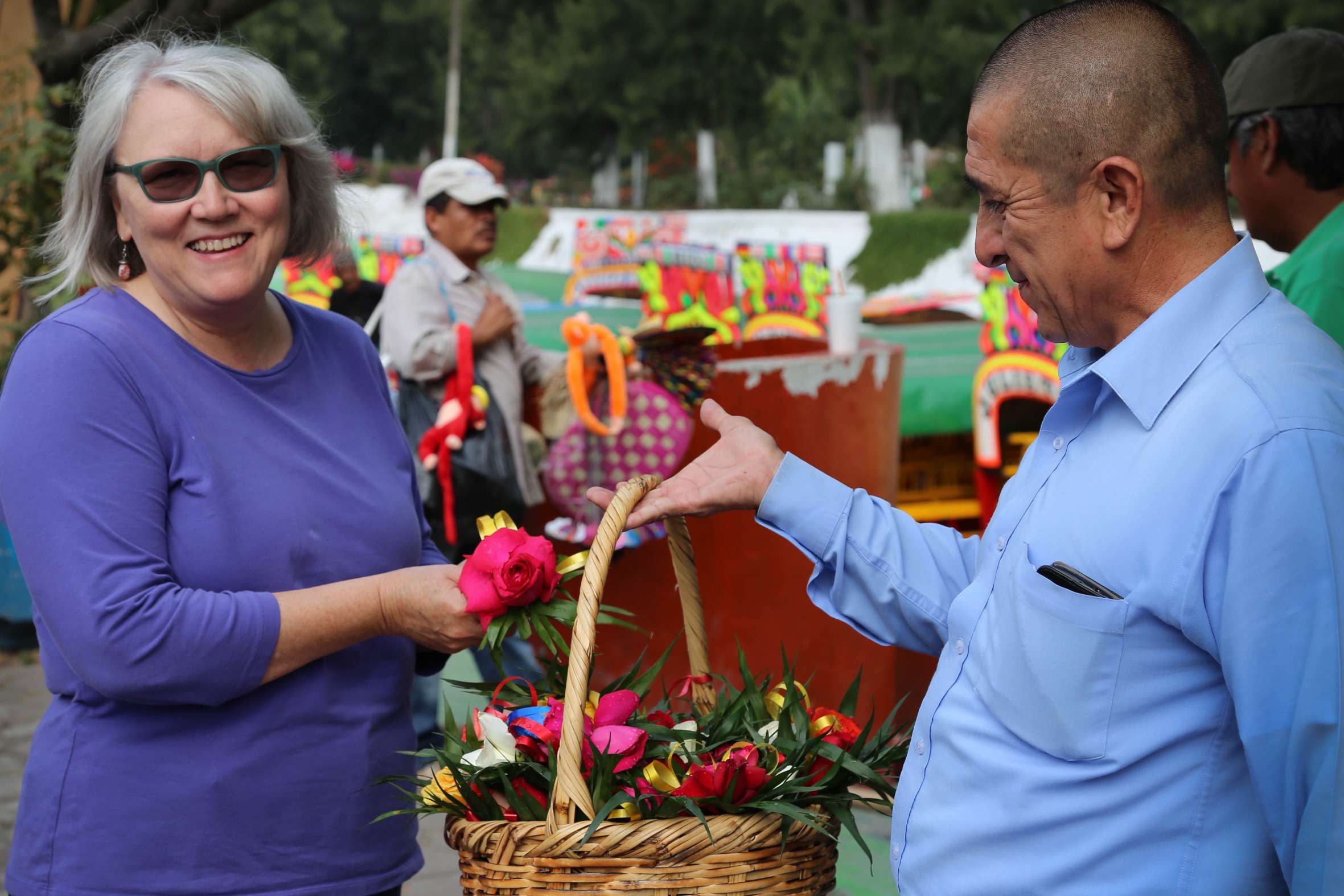 A vendor offers flowers to a visitor before she boards her trajinera for an enjoyable afternoon at the canals at Xochimilco.

The people who continue to live on the chinampas have been there for many generations and not surprisingly, real estate there is pricey and can be acquired only by those who are either the family member of a preexisting resident or someone who has married into a family. 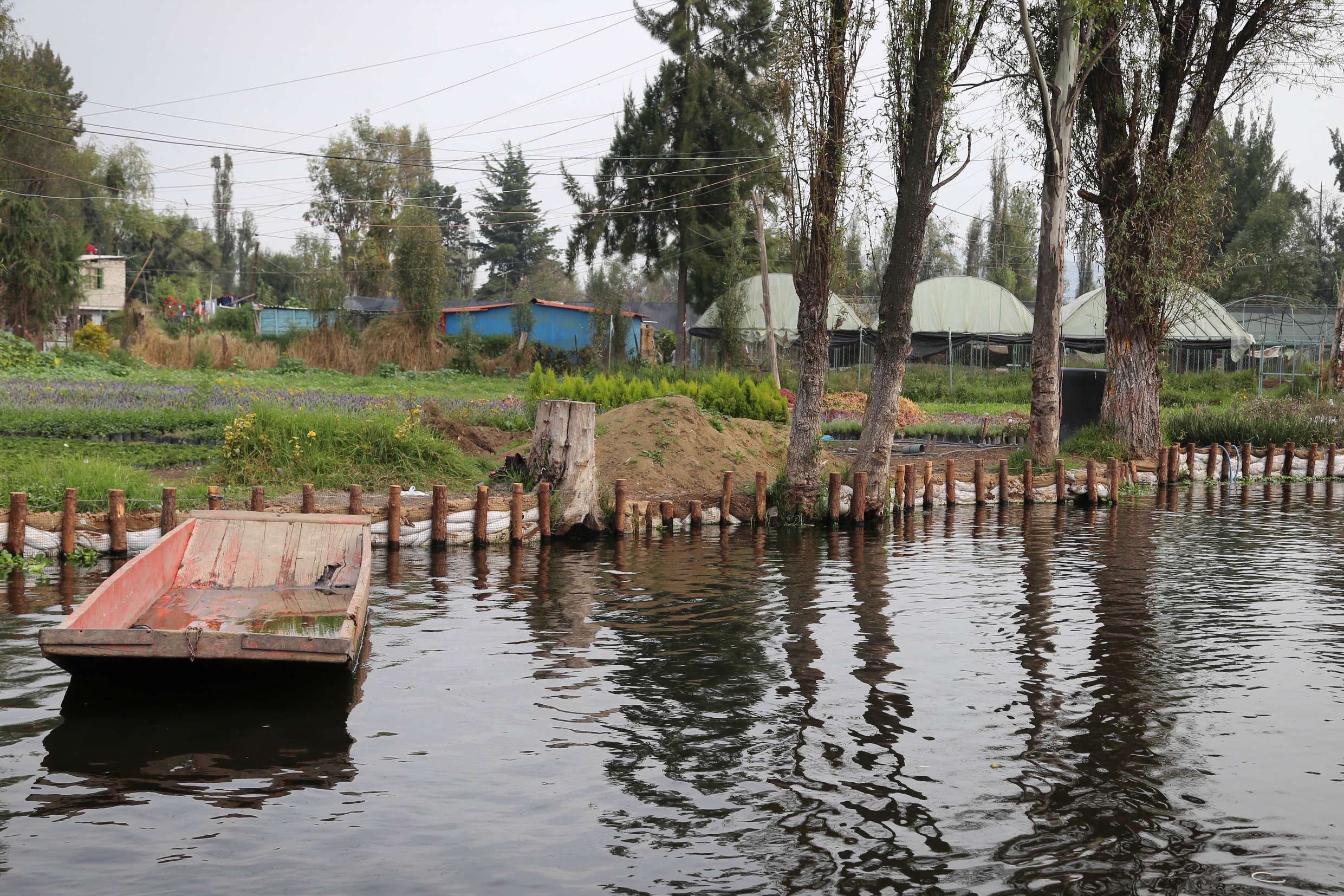 This family runs a successful business growing plants and flowers on their land.

Many families live on their floating lands full time and some of the homes have become well developed and modern. Flowers are grown for sale, and food and garden plots dot the many small islands. 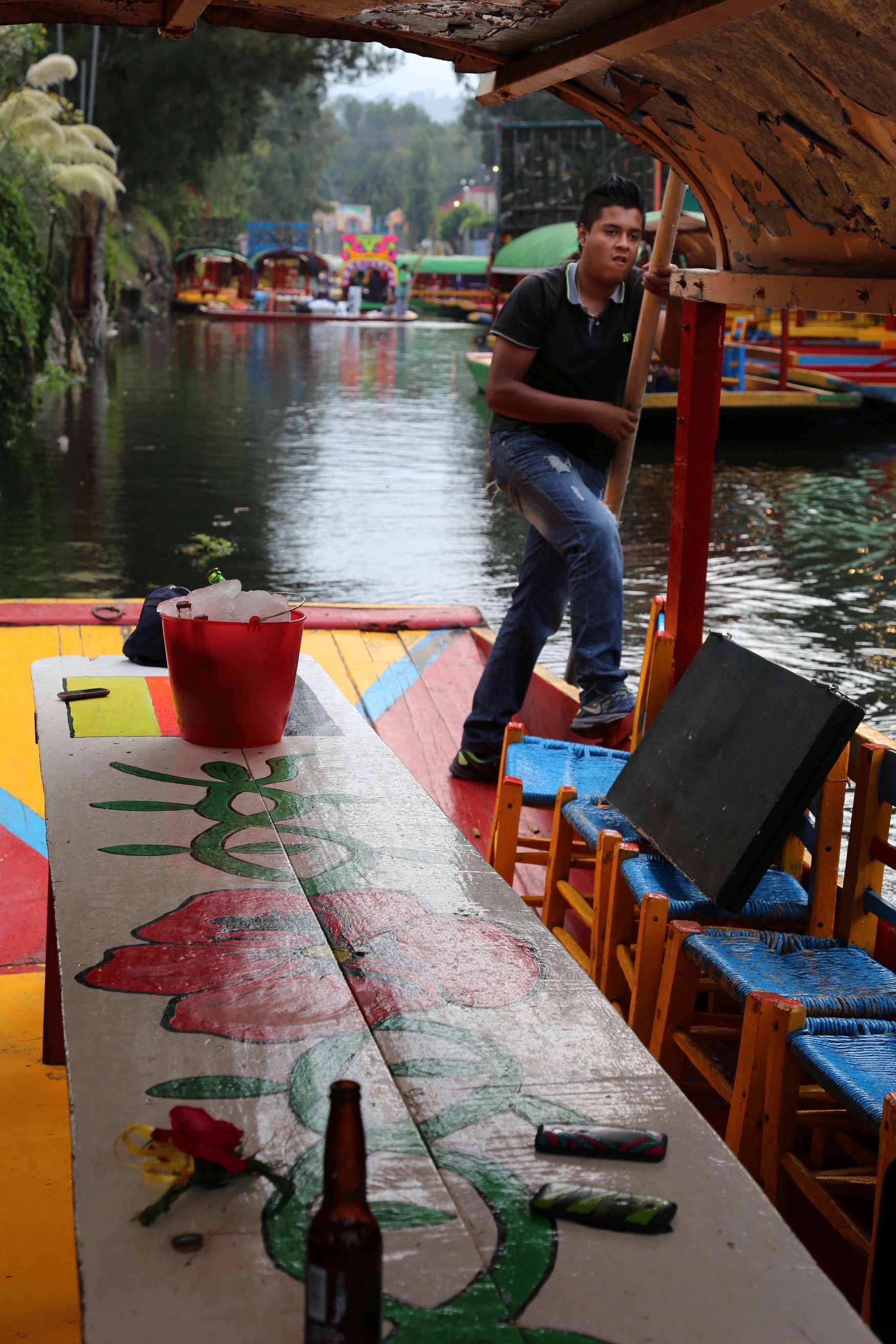 A ‘captain’ poles his trajinera along the water.

The canals at Xochimilco are both a way to relax and enjoy a leisurely time, it is also a chance to reflect on the fact that the water ways you are floating along today have been in use long before the Spanish ever set foot in Mexico. 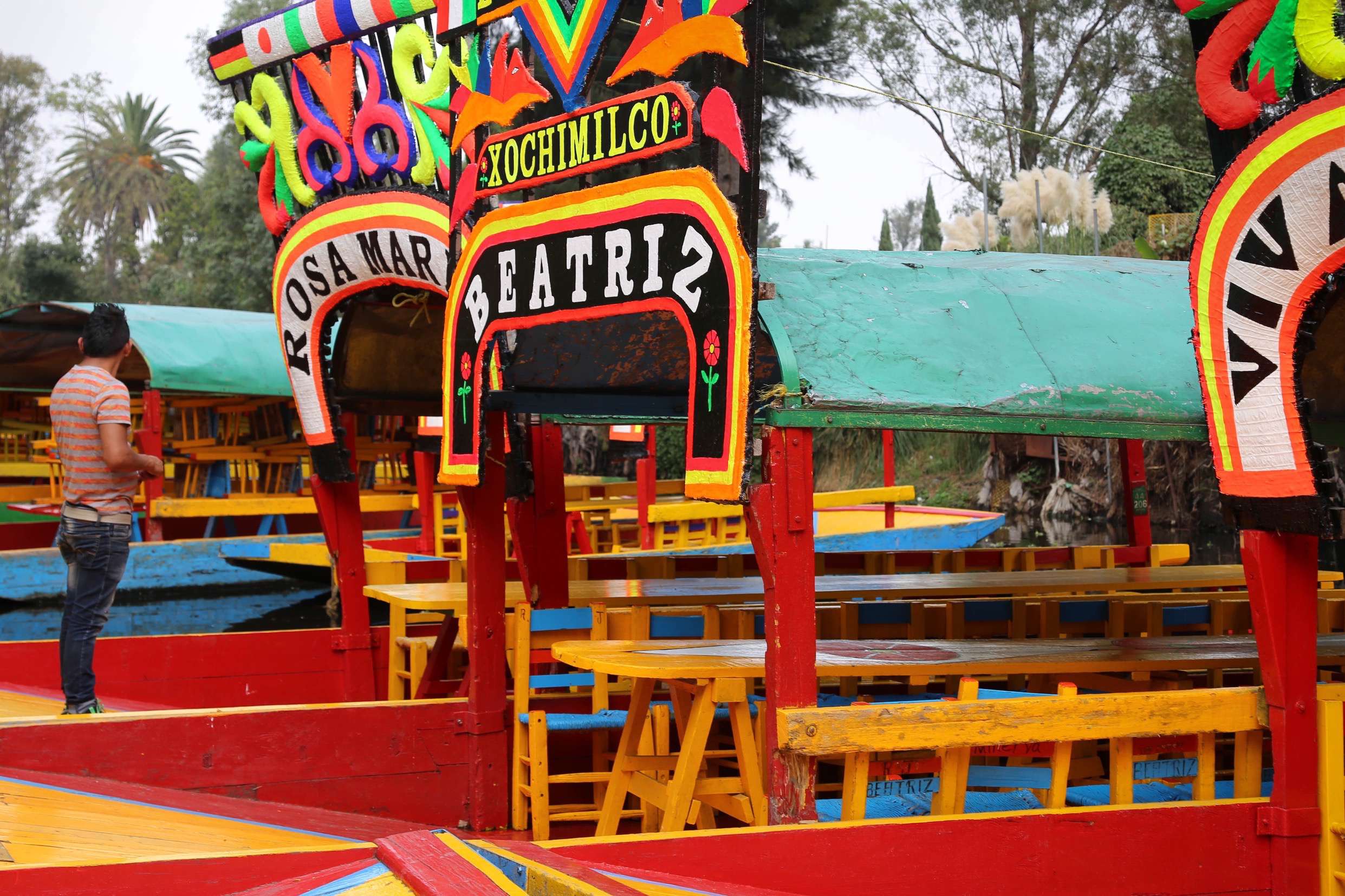 A ‘captain’ of the Rosa Maria waits hopefully for his next load of visitors.

For more information about Xochimilco,  click on the websites below: