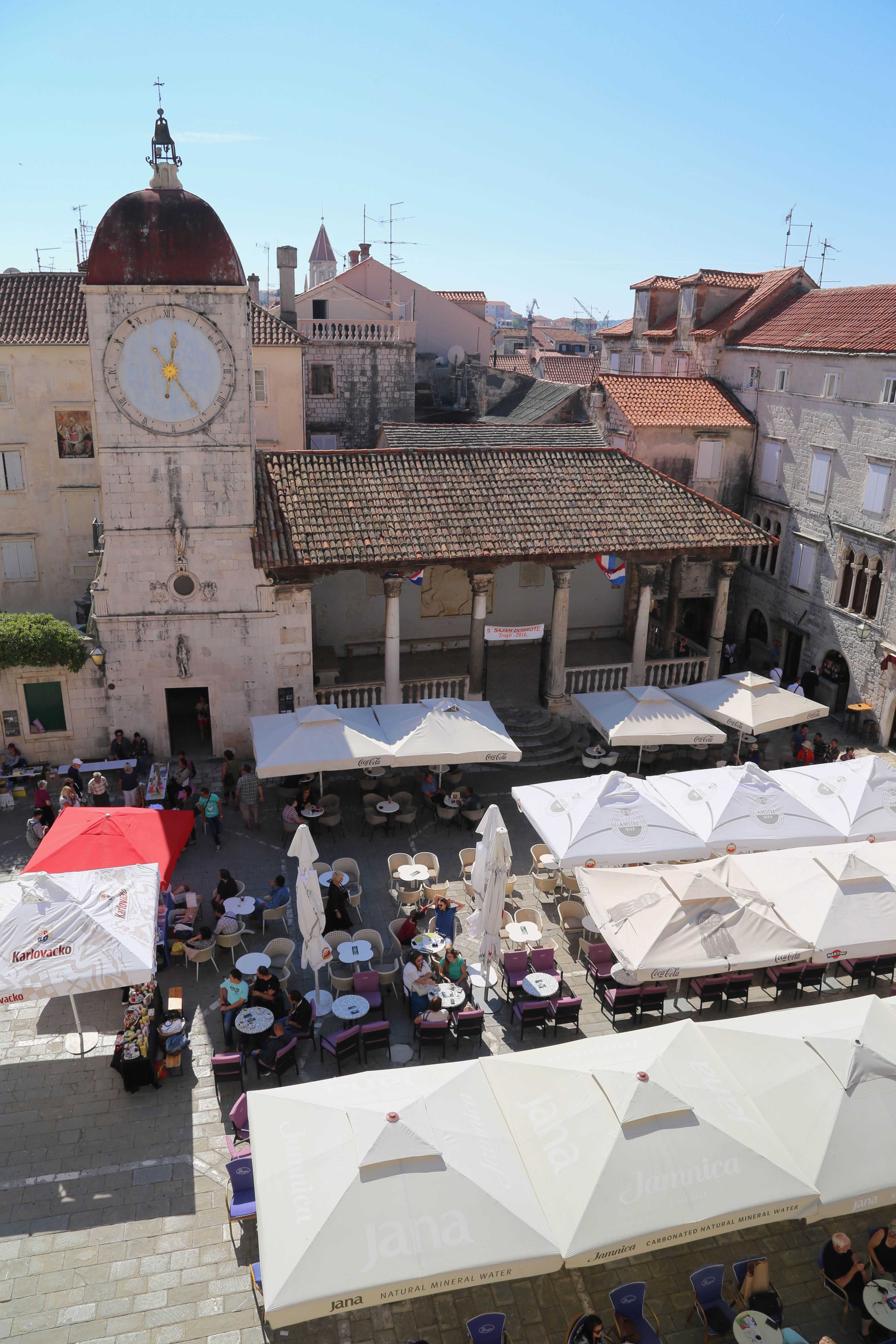 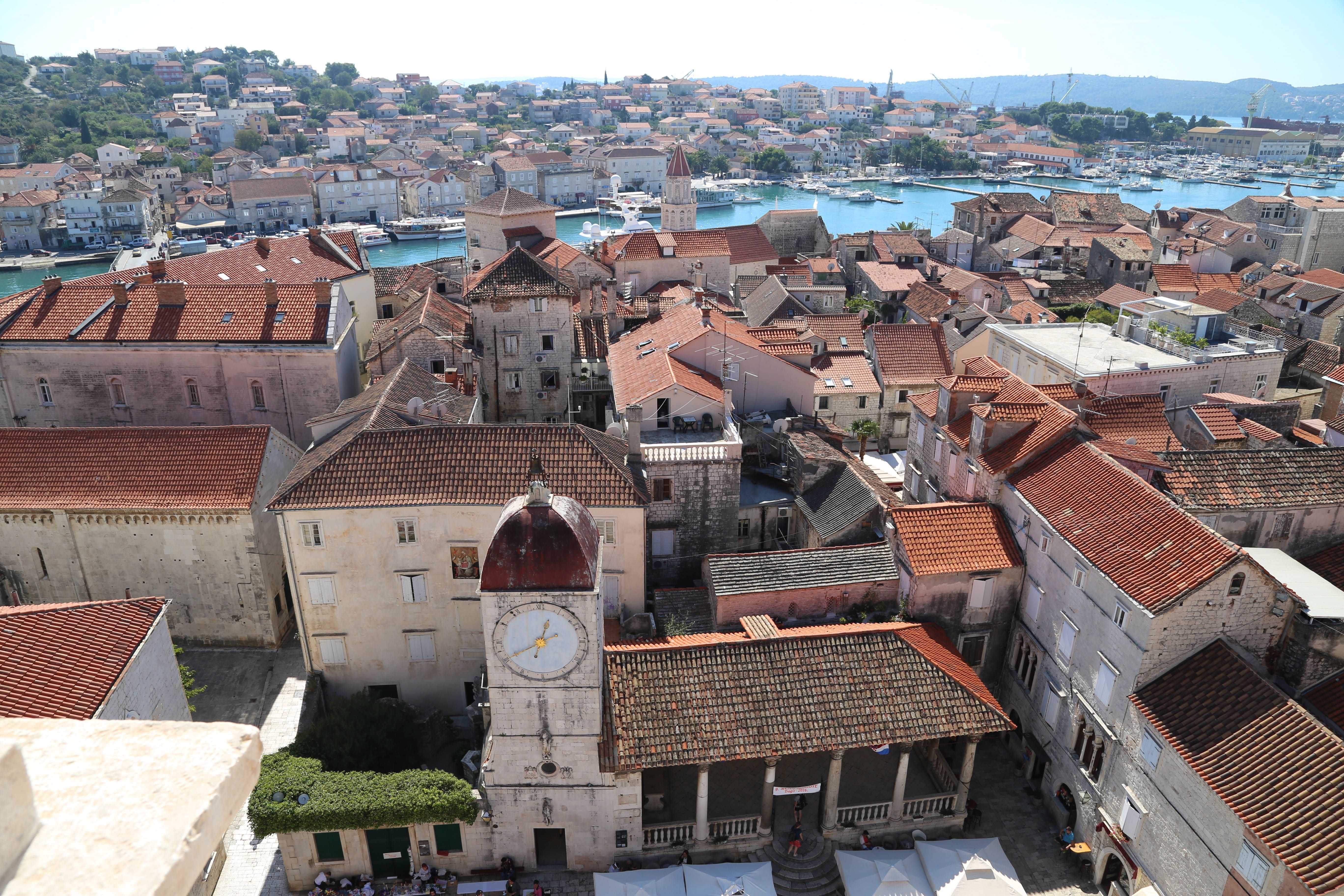 The islet that makes up part of the town of Trogir is a pedestrian-friendly treasure trove of buildings, churches, and streets that date from the 13th Century. Across the waterway is the island of Čiovo that includes part of Trogir.

It would be fair to characterize Trogir, Croatia as a “hop, skip, and a jump” sort of town. The biggest part is located on the mainland, there’s a smidgen that sits on a small islet, and the rest of the town is on a larger, but still small island named Čiovo. And while all of Trogir is charming, the islet – designated a World Heritage Site by UNESCO – gets most of the attention and has been attracting people for more than 2,300 years. 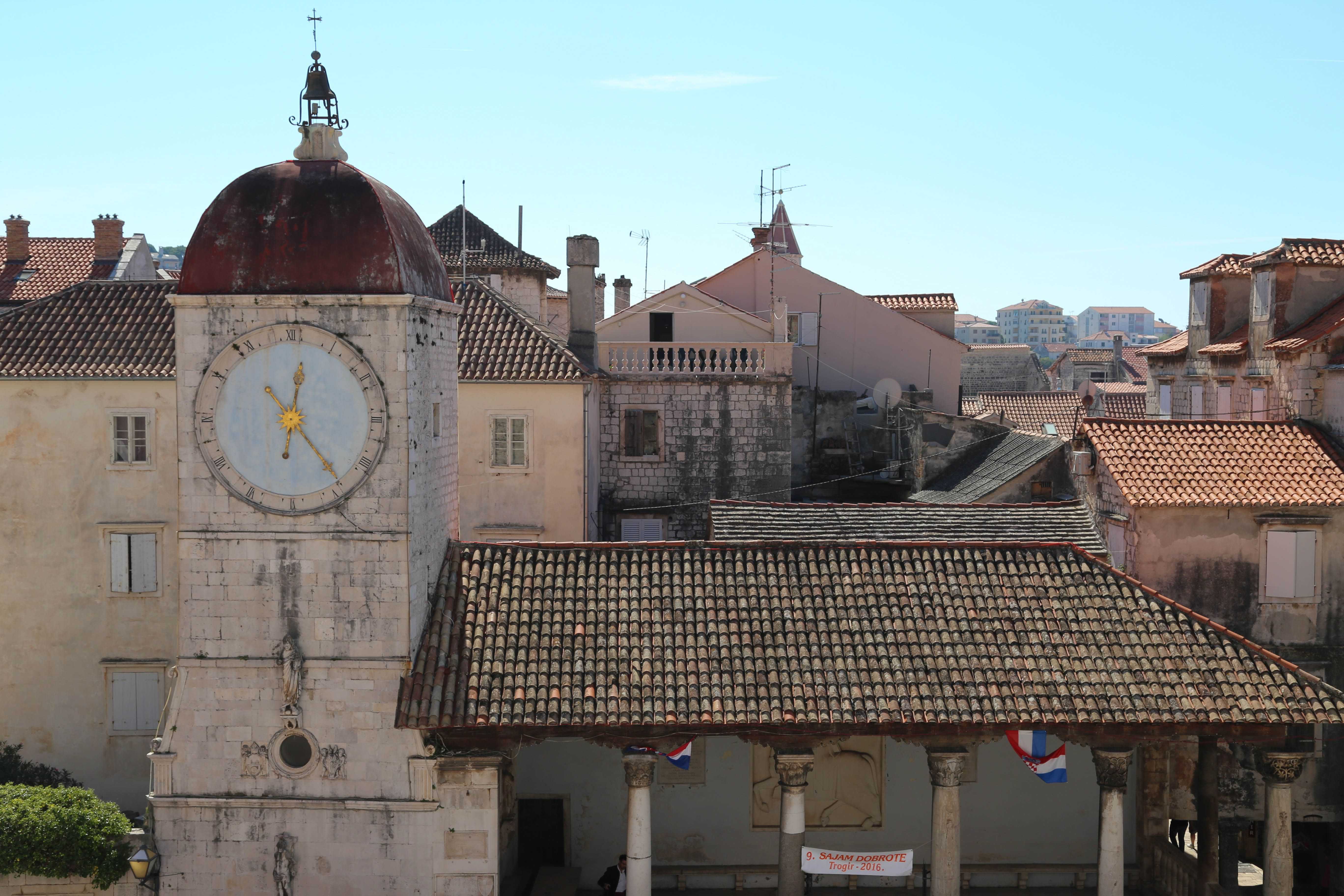 The clock tower across the square from the Cathedral of Saint Lawrence is emblematic of the charm and beauty of Trogir, a town heavily influenced by Venetian-era architecture. And yes, the clock keeps accurate time. 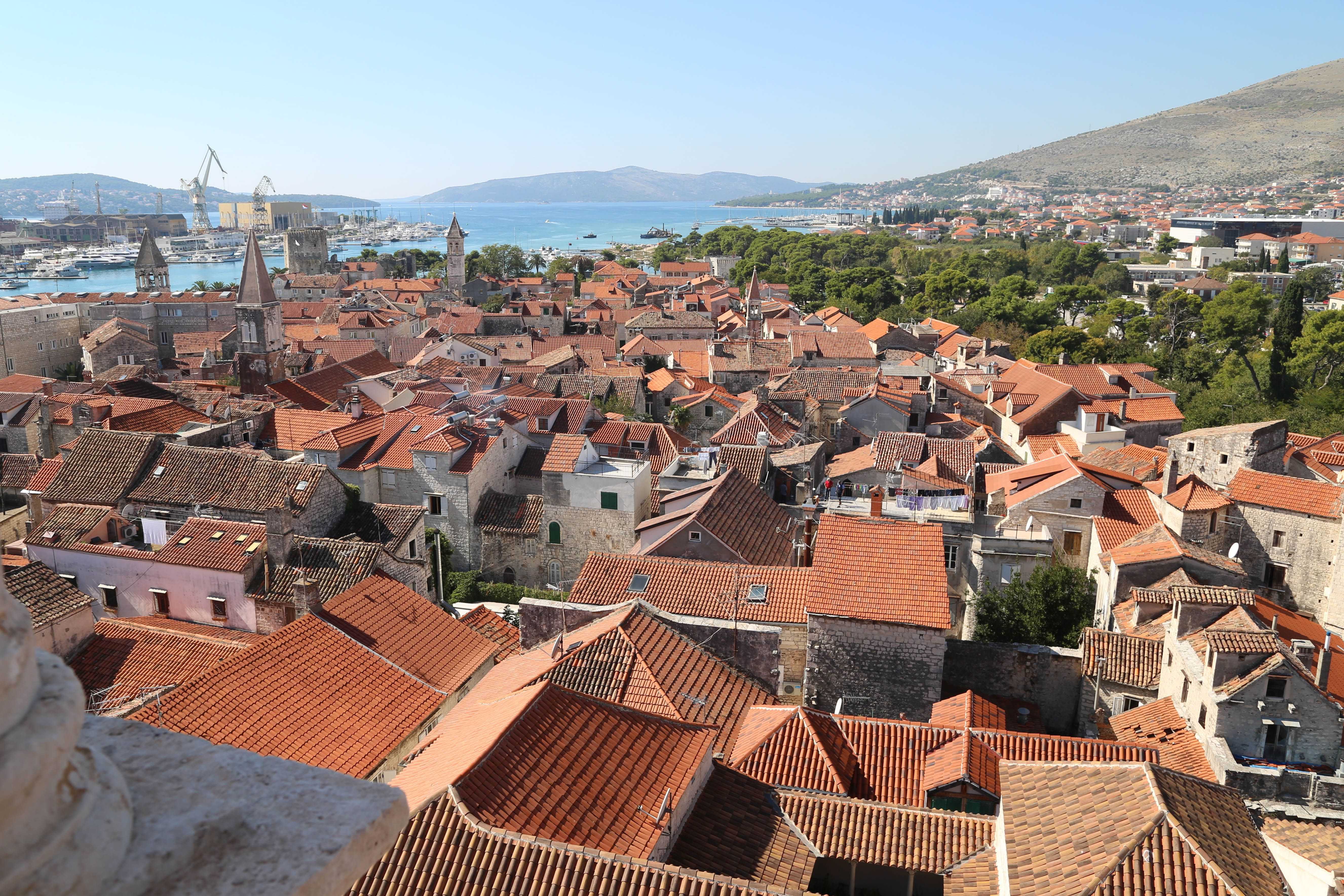 The terra cotta roofs and limestone buildings are a feature found in many of the old towns and cities throughout Croatia, and this view from the bell tower of the St. Lawrence Cathedral is a strong example of that. 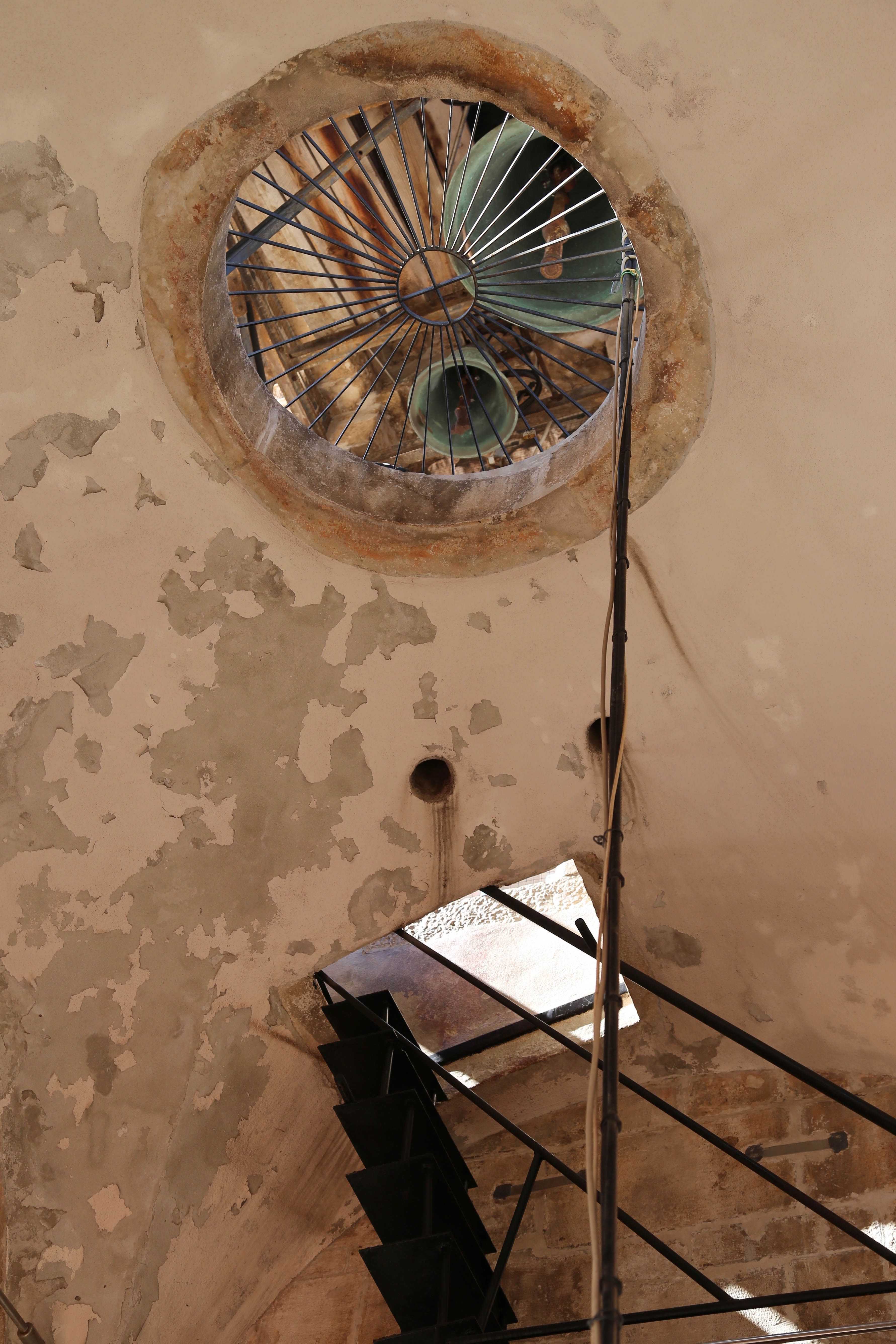 The climb up the bell tower of the Cathedral of St. Lawrence is a study in Old World construction techniques, with the addition of a metal staircase. 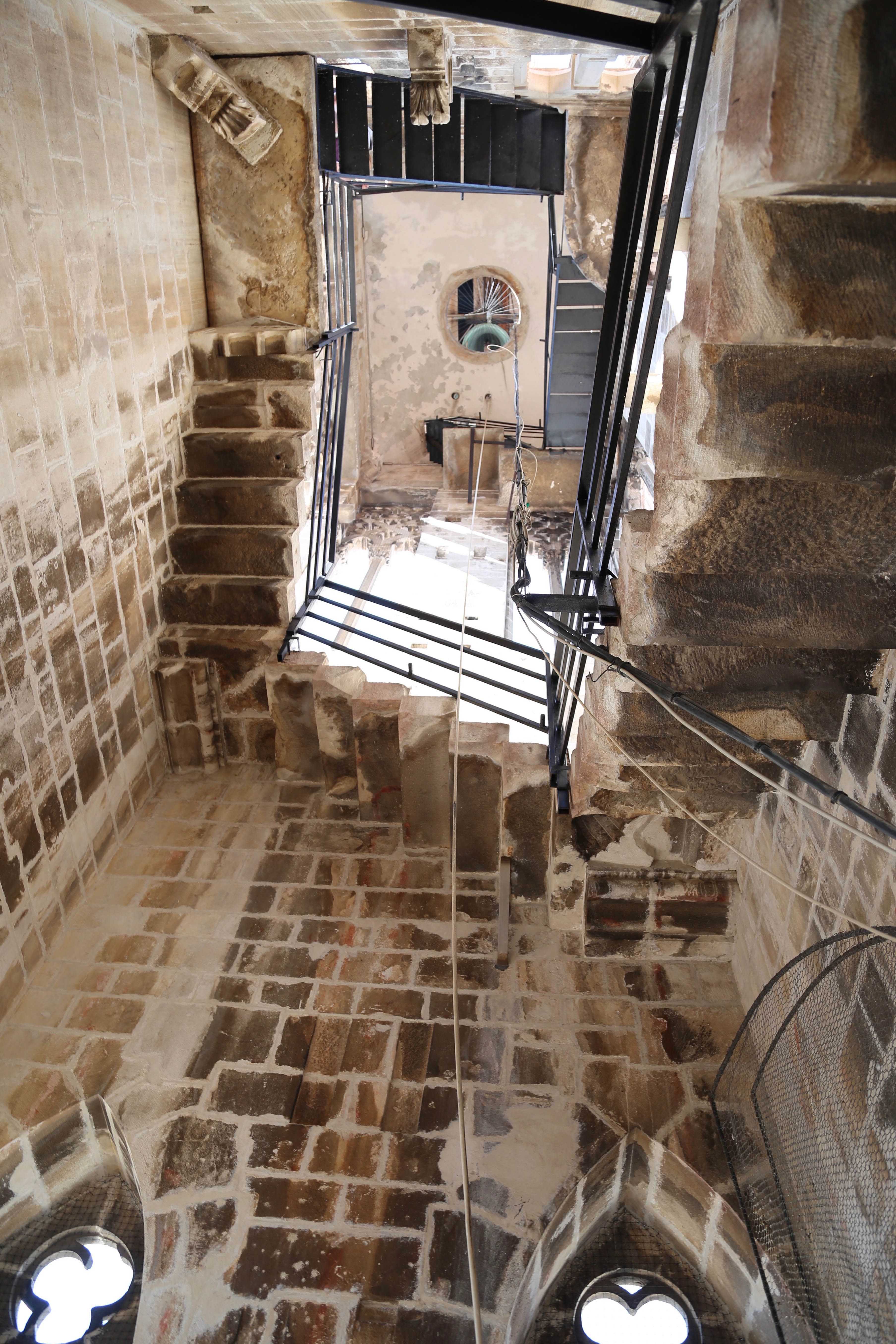 More than one visitor has decided that the view from the top of the bell tower might be a bit more challenging than originally thought.

The steps of the spiral staircase in the bell tower at the Cathedral of St. Lawrence shows centuries of wear.

Located in Dalmatia about 17 miles due west of Split, the islet that is part of Trogir (troh-gear) is tucked between the mainland of Croatia and protected by the island of Čiovo (chee-oh-voh). By way of size comparison, Čiovo is just over 11 square miles, while the islet of Trogir is a mere 27.6 acres. But make no mistake, there’s a world of history and charm to be found on that small parcel of land. 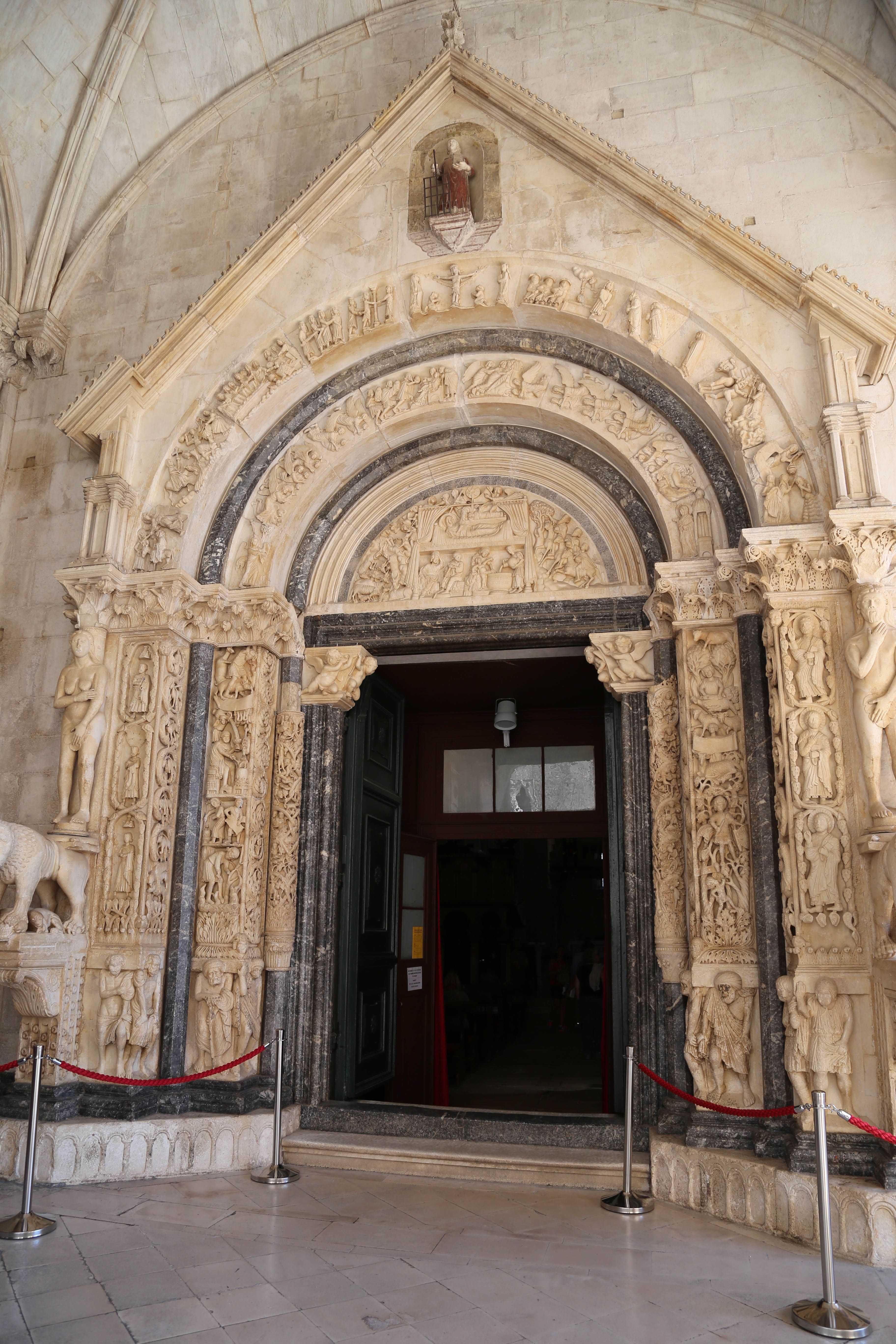 The elaborately carved portal that serves as entrance to the Cathedral of St. Lawrence is one of several distinctive features that delight visitors to Trogir. 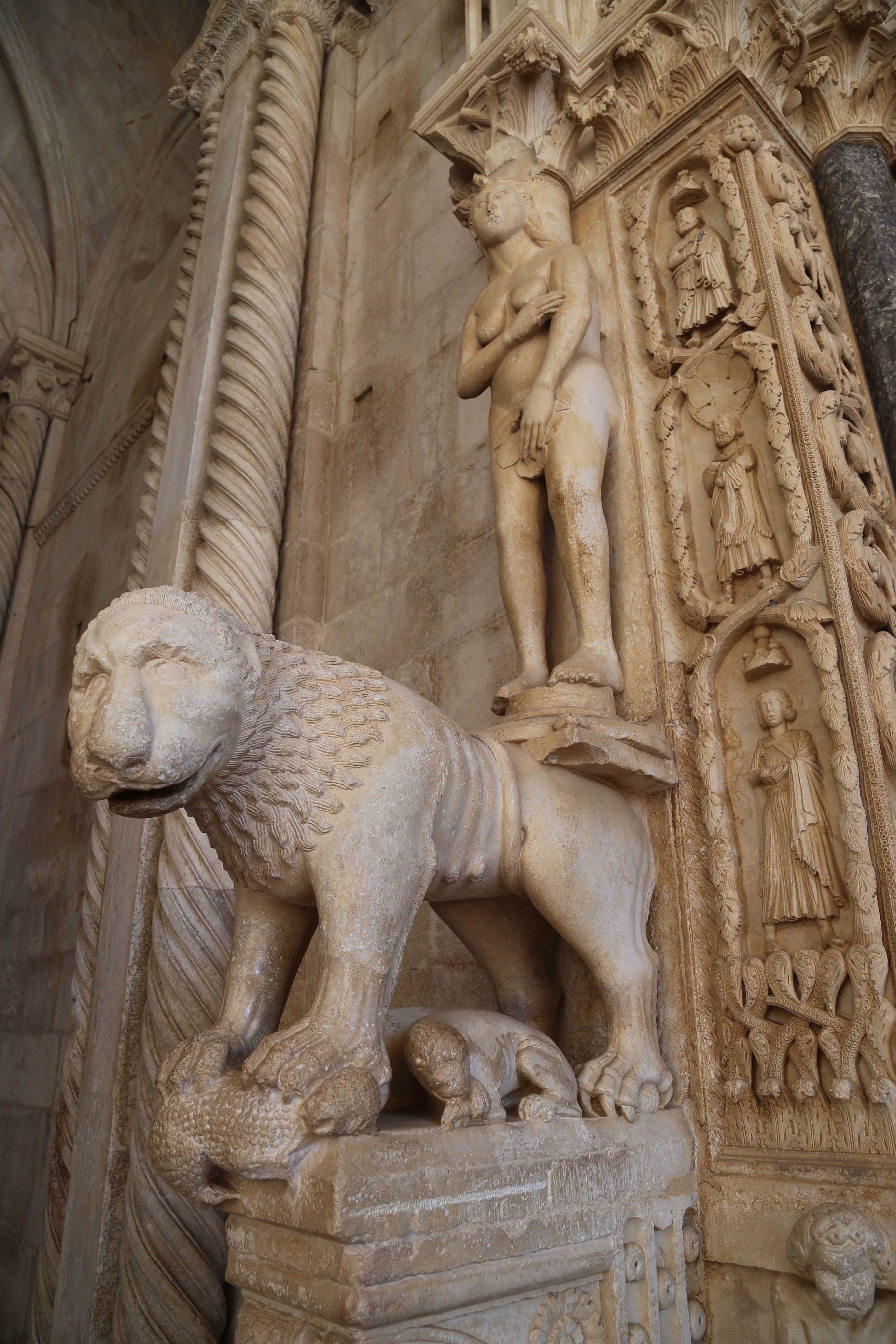 The intricately carved cathedral portal is credited to a little-known Croatian architect named Radovan. The nude female above the lion may represent Eve, because the right side of the portal depicts a nude male, possibly representing Adam. 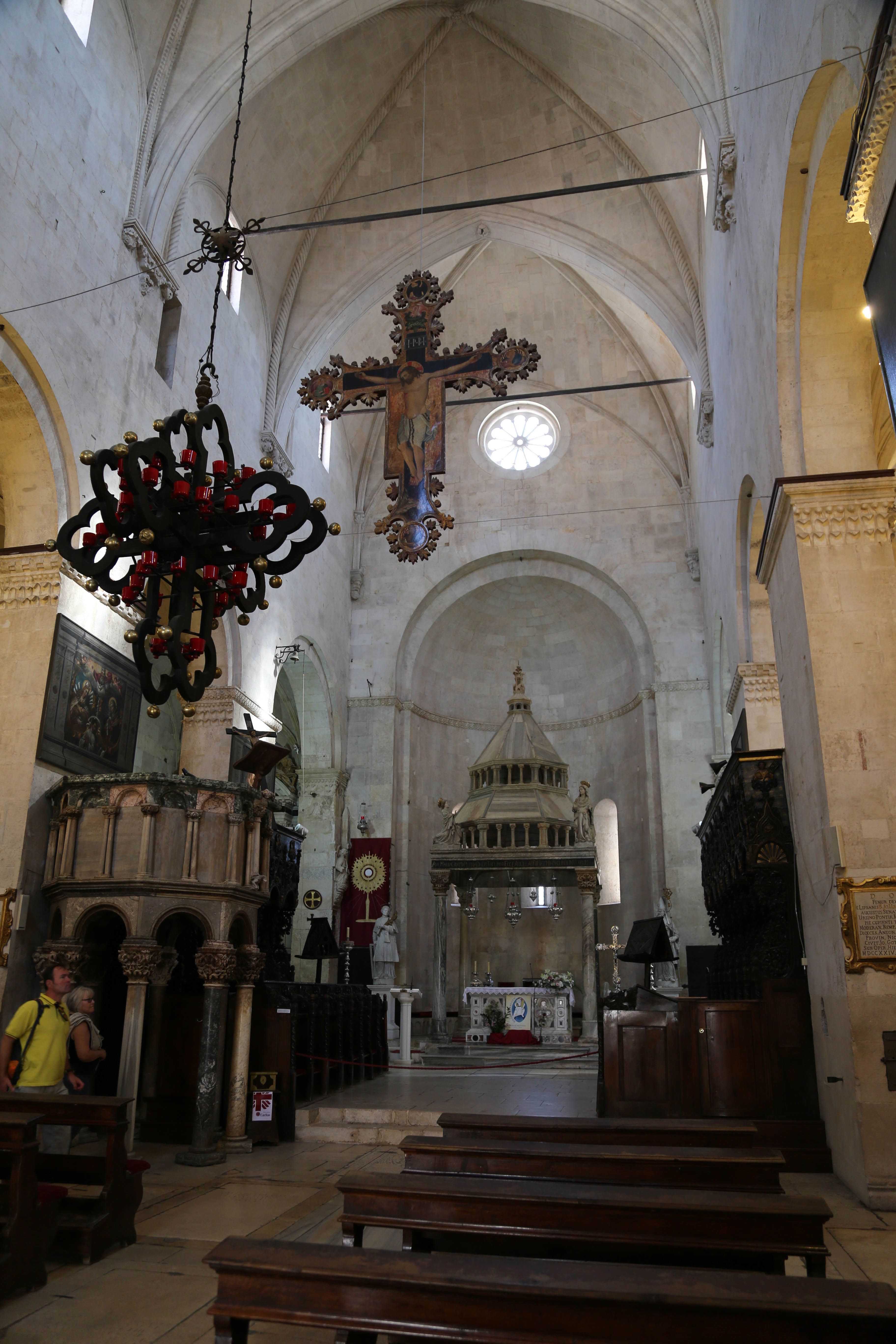 The apse of the Cathedral of St. Lawrence reflects the strong influence of the Catholic Church that has been a part of Trogir for many centuries. 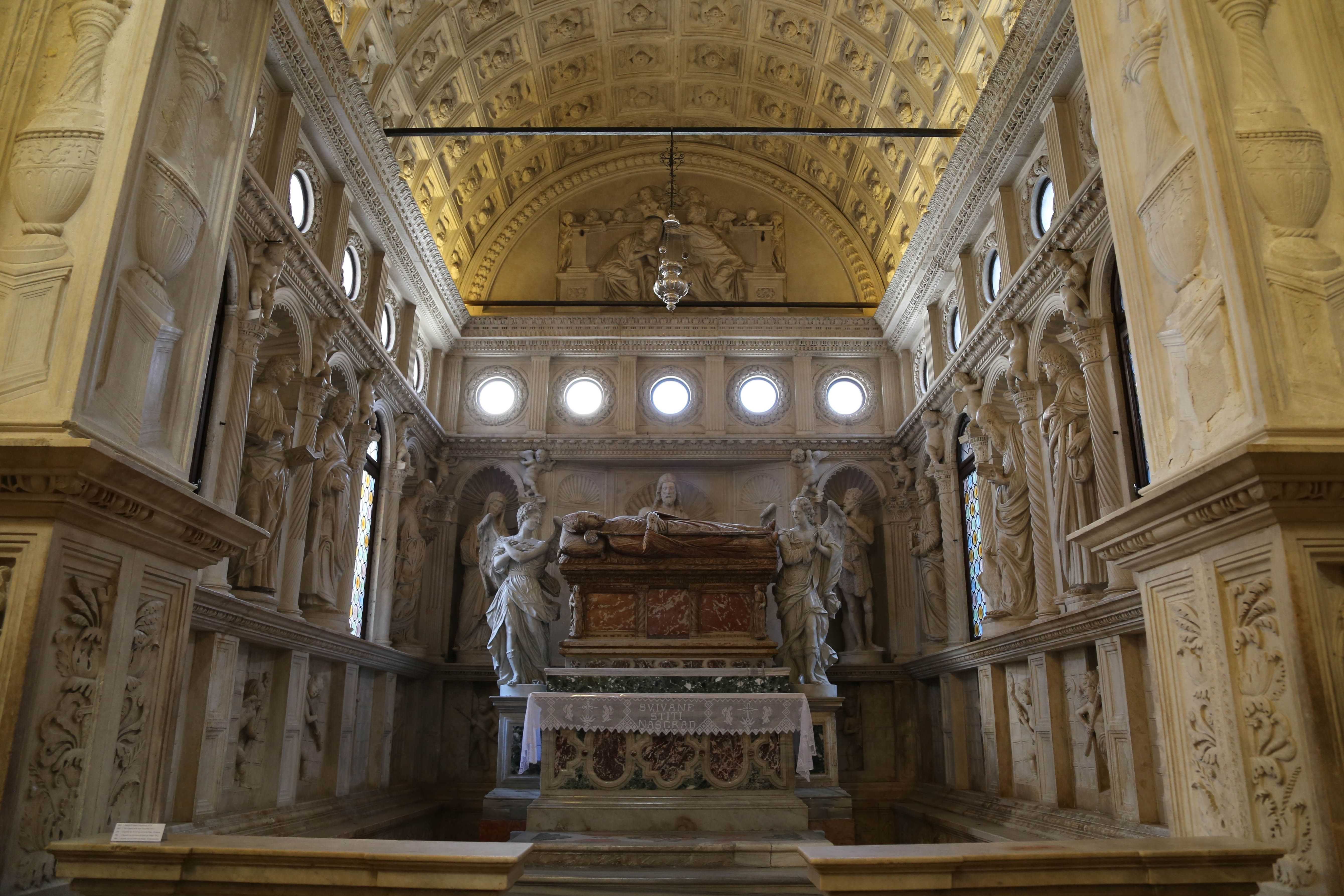 A chapel with the tomb of Ivan Orsini is a popular stop for many of the visitors who come to the old city of Trogir.

As far back as the 3rd Century B.C. the small islet has been settled. First by Greeks, later by others that included Romans, Saracens (generally considered to be Muslims and Arabs), Byzantines, Venetians, and Hapsburgs, among others. During World War II Trogir was annexed by Italy (at its closest point about 126 miles away), then liberated by Josip Broz Tito in 1944, and subsequently subsumed into Yugoslavia until 1991 when Croatia became a nation of its own. 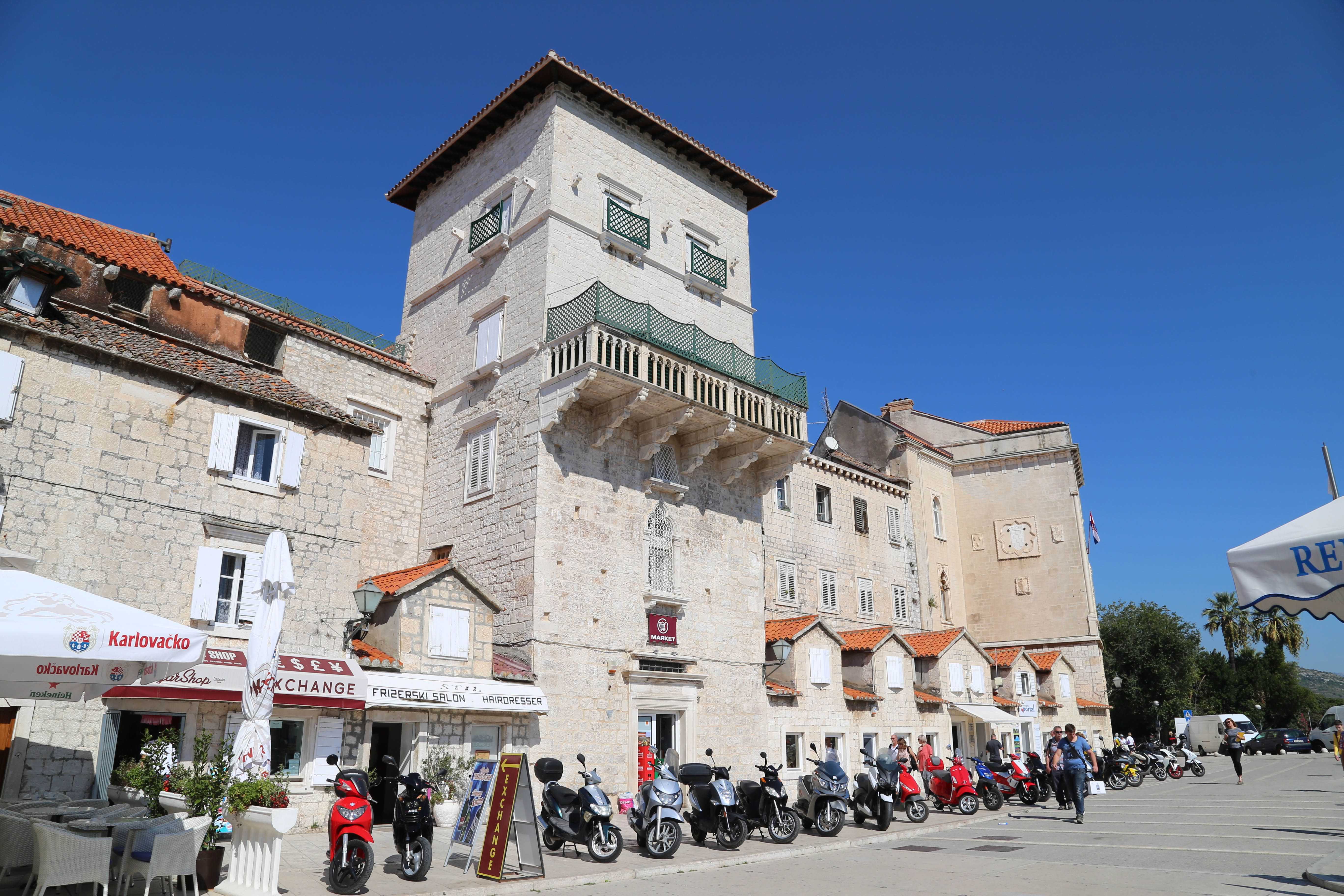 The cafe along the Riva (promenade) in the old city of Trogir is a perfect spot to let time idle over a glass of wine and people watch as you soak in the warmth of Croatia’s sun. 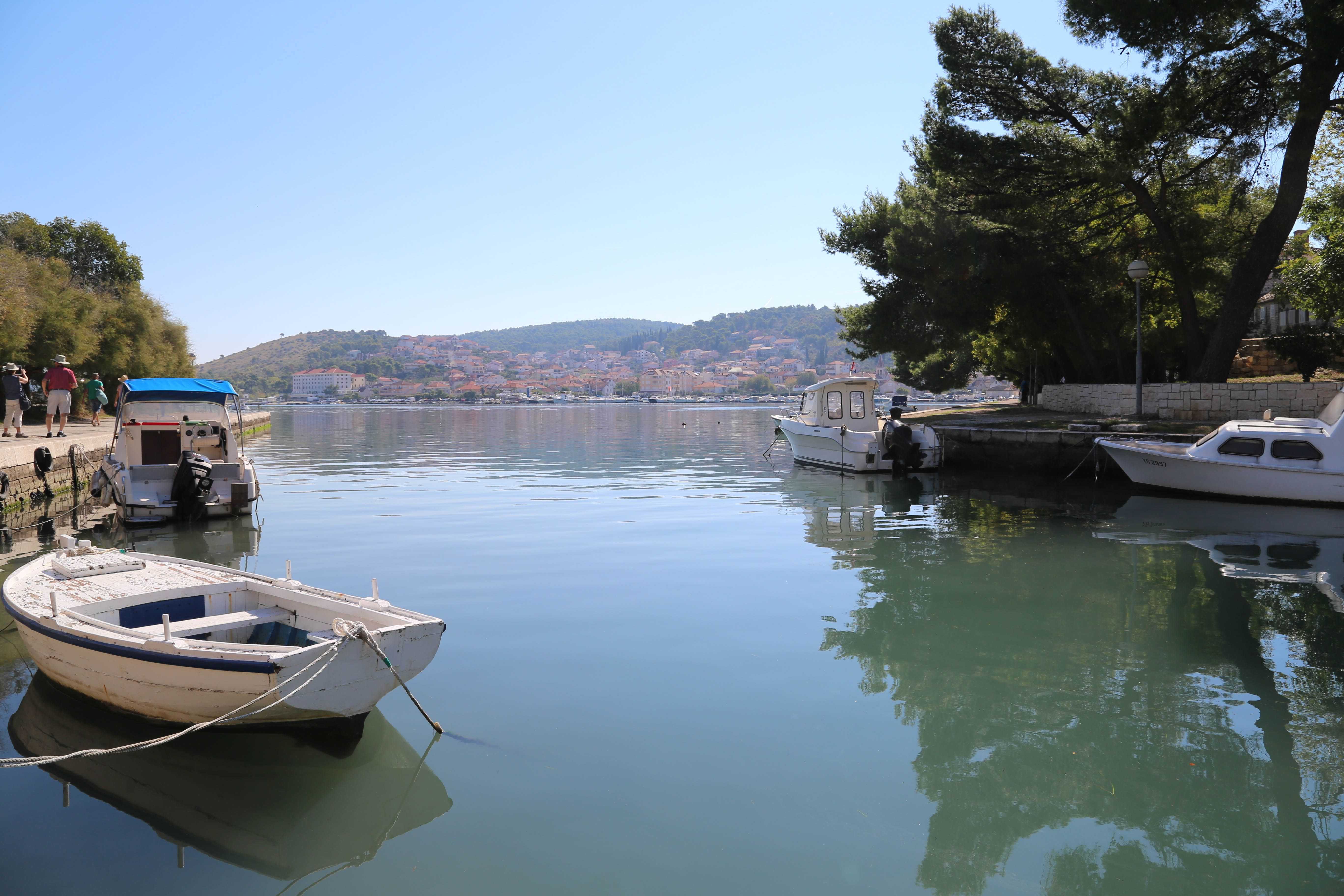 The islet where the old city of Trogir is located is literally a stone’s throw from the mainland, making it a short walk of less than a minute across the bridge.

From its earliest days the town thrived as a trading center, and a place to conduct business, and sign contracts. Despite its small size, Trogir has an excellent concentration of towers, churches, palaces, and a small fortress on the southeastern corner of the island. The upside for visitors is they can see a lot in one day, or they can slow their pace and soak up the history of Trogir. 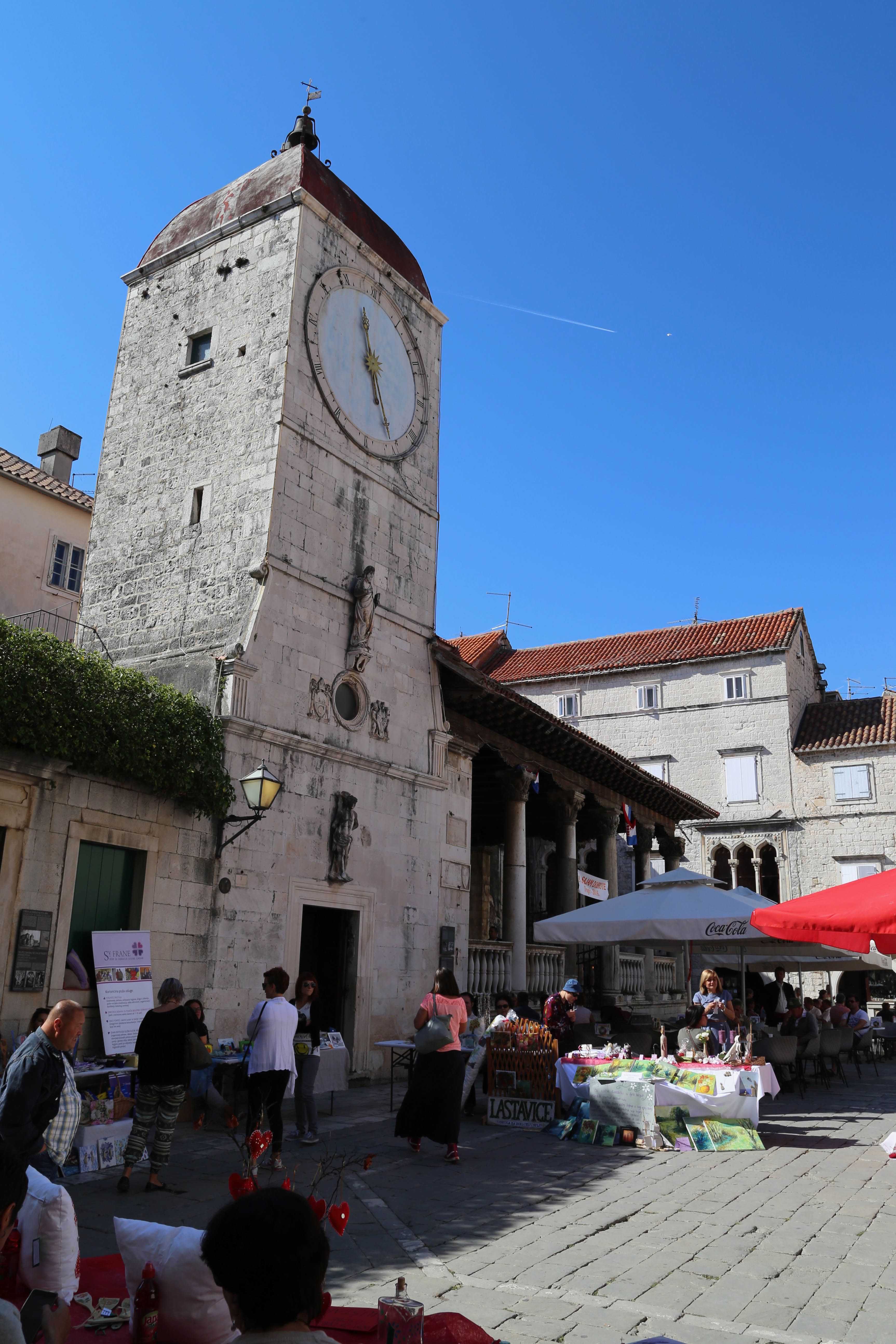 The clock tower faces the Cathedral of St. Lawrence and the square that separates them continues to be serve as a multipurpose venue. Cafes set up tables, vendors sell goods, and visitors amble around the square that has been in use for 700 years.

The Venetian Empire ruled Trogir for about four centuries. Consequently, much of the original islet’s architecture has a Venetian influence with terra cotta roofs, limestone buildings and columns that support archways and walls. In 1997 UNESCO designated the old city of Trogir as a World Heritage Site, citing it as a “remarkable example of urban continuity… Its beautiful Romanesque churches are complemented by the outstanding Renaissance and Baroque buildings from the Venetian period.” 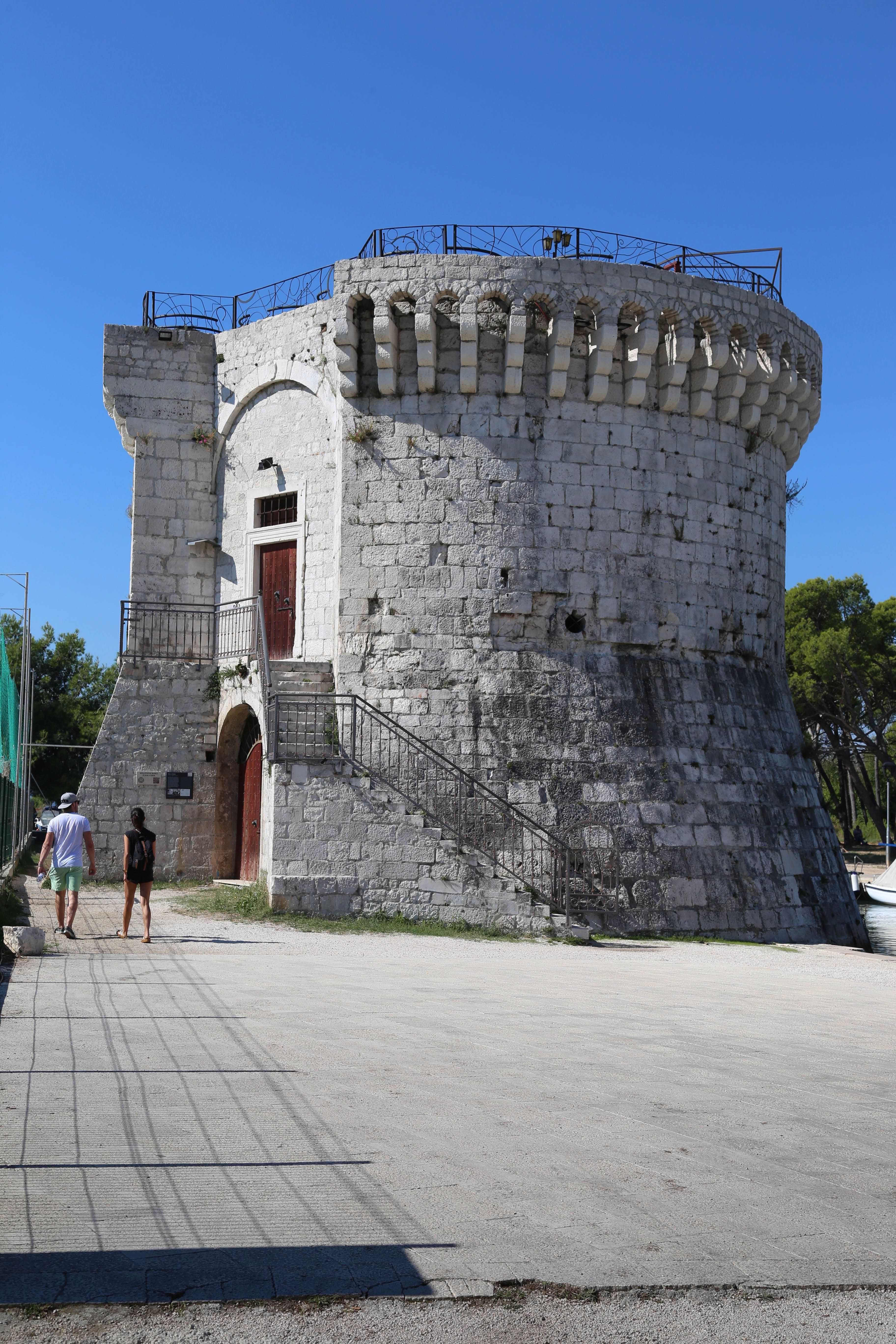 On the western end of the islet is a tower that kept watch for ships — both friend and foe — approaching from waters that open up to the Adriatic Sea.

Trogir offers her visitors a wonderfully preserved arc of history, including 13th Century gems such as the Duke’s Palace, the Cathedral of Saint Lawrence (including the gorgeous portal produced by Croatian artist and architect Master Radovan), another 10 or so churches and a number of buildings. There is a collection of 15th Century wonders such as the Kamerlengo Fortress, the old city walls, the loggia, and the large and small palaces of the Cipiko family, and even into the 17th Century there is the Trogir city gate. 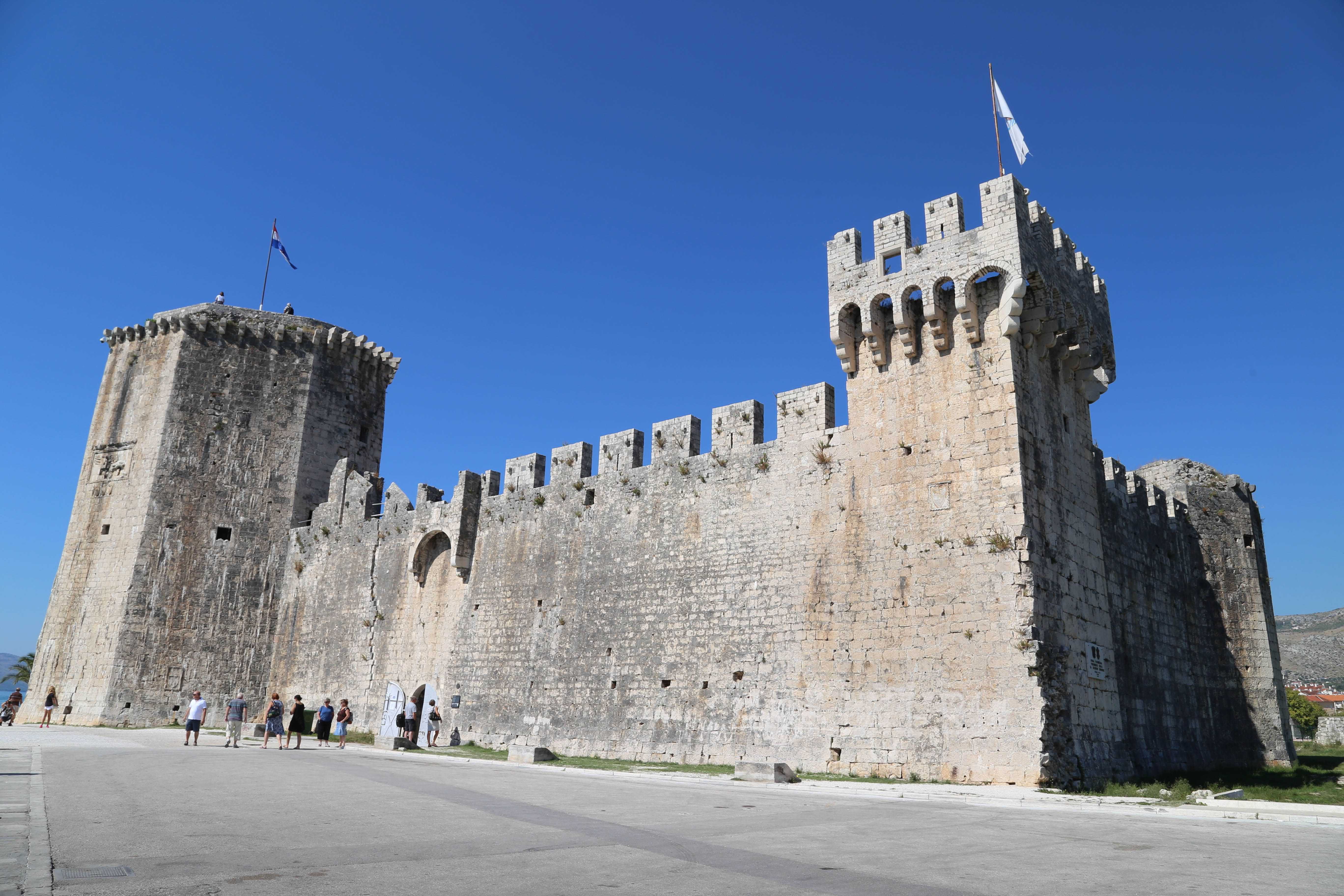 Kamerlengo Fortress has stood guard for centuries at the western end of the islet that is home to the old city of Trogir.

A climb up the stairs of the bell tower of the Cathedral of Saint Lawrence affords a panoramic view of Trogir and shows how small the islet is and its proximity to both the mainland and Čiovo. 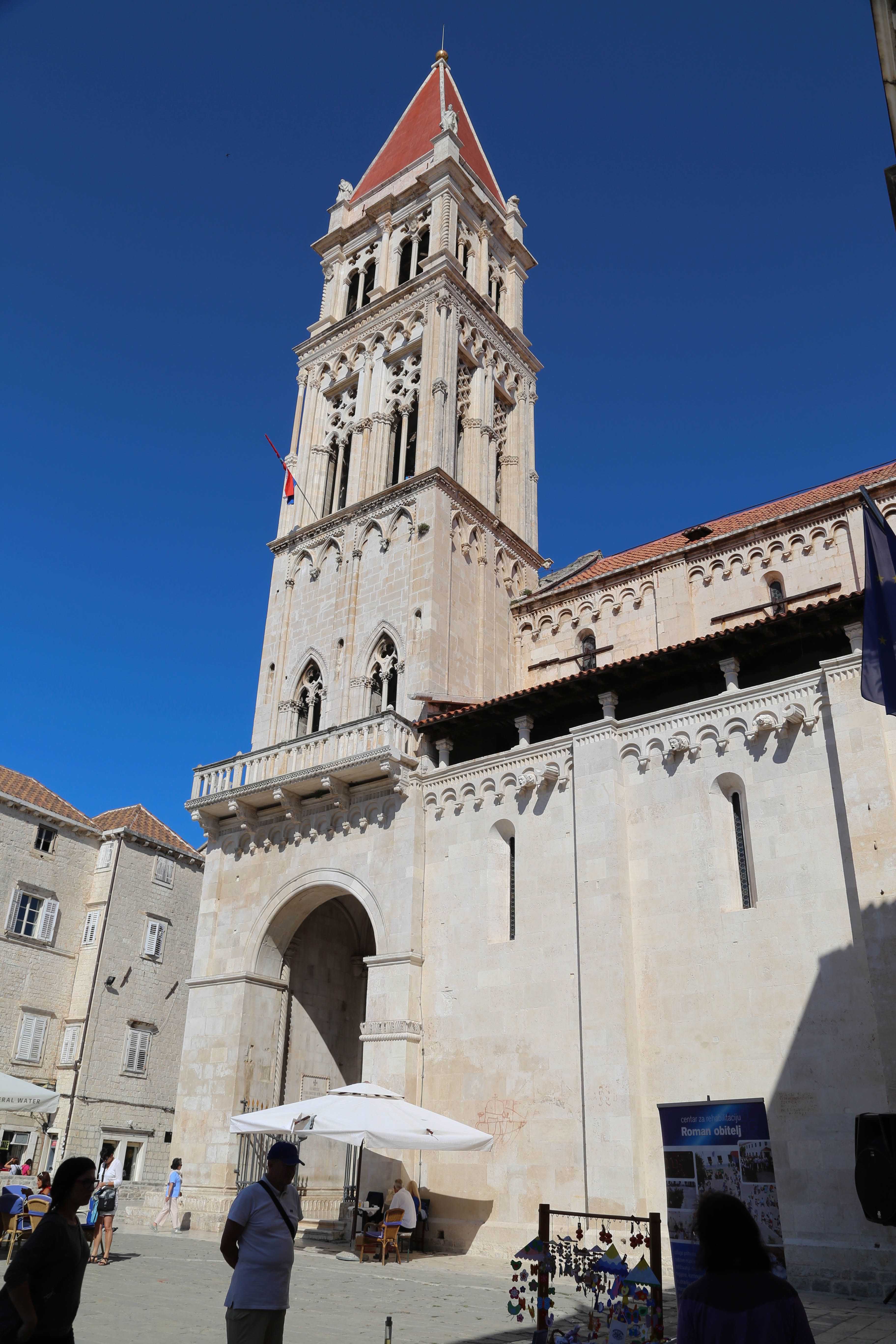 The Cathedral of St. Lawrence is a focal point in the old city of Trogir and part of the collection of buildings and structures that prompted UNESCO to designate the old city as a World Heritage Site. 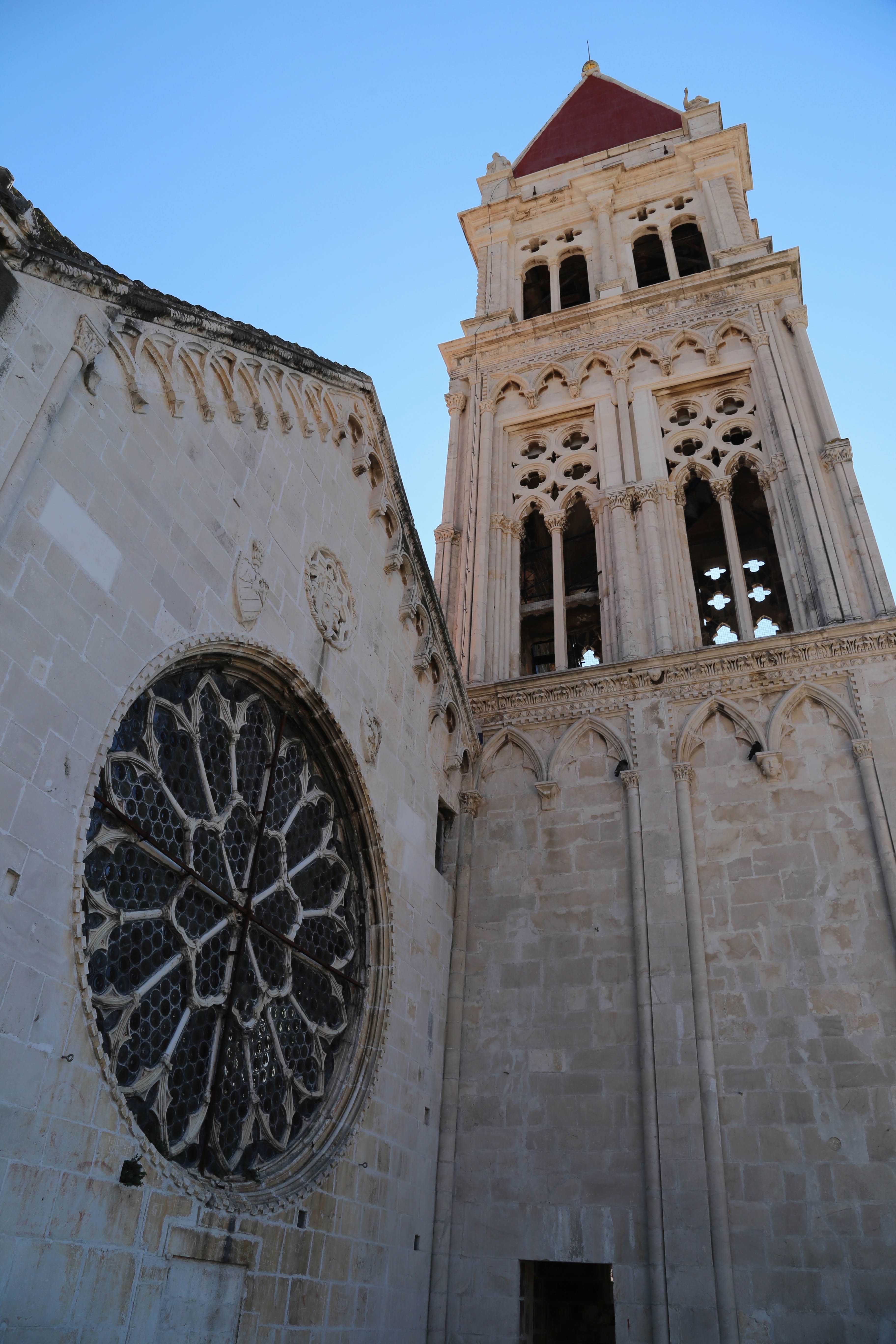 The large stained glass window in the cathedral and the slender columns of the bell tower give the cathedral a distinctive look that is reflective of the Venetian architectural influence that is found in much of the old city.

Tourism is clearly the economic engine the powers the islet, and all of Trogir. There is a good selection of restaurants and cafes to choose from featuring local dishes. Getting to the islet is as simple as taking a ferry from Split, riding a bus, or driving. It’s best to park on the mainland and walk across a short bridge and through the north gate. There is very limited parking on the islet, and the interior streets of the islet have all been pedestrianized. 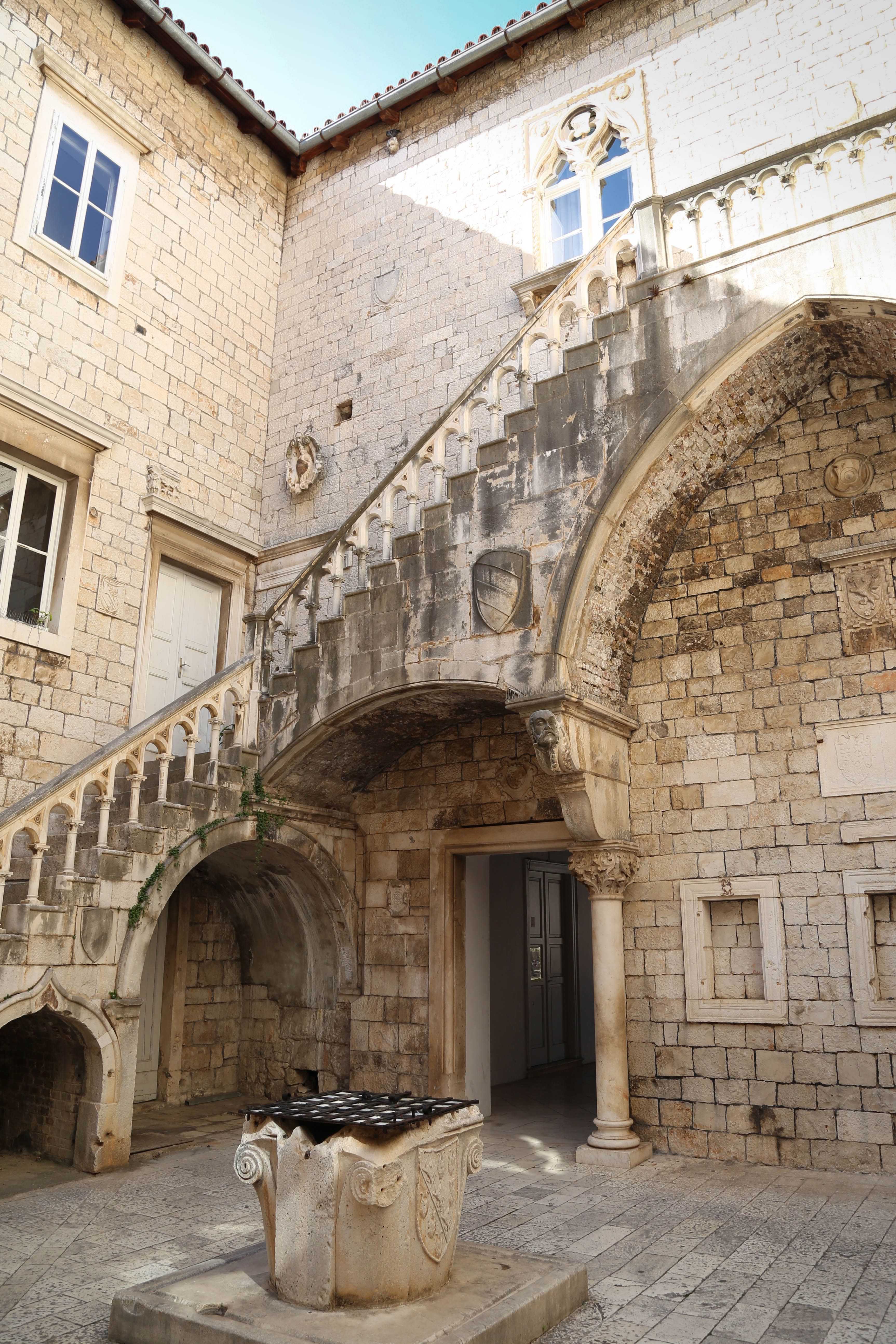 The column and archway supporting these steps are a design element from the Venetians whose 400 years of occupation of the old city gives Trogir an elegant look. 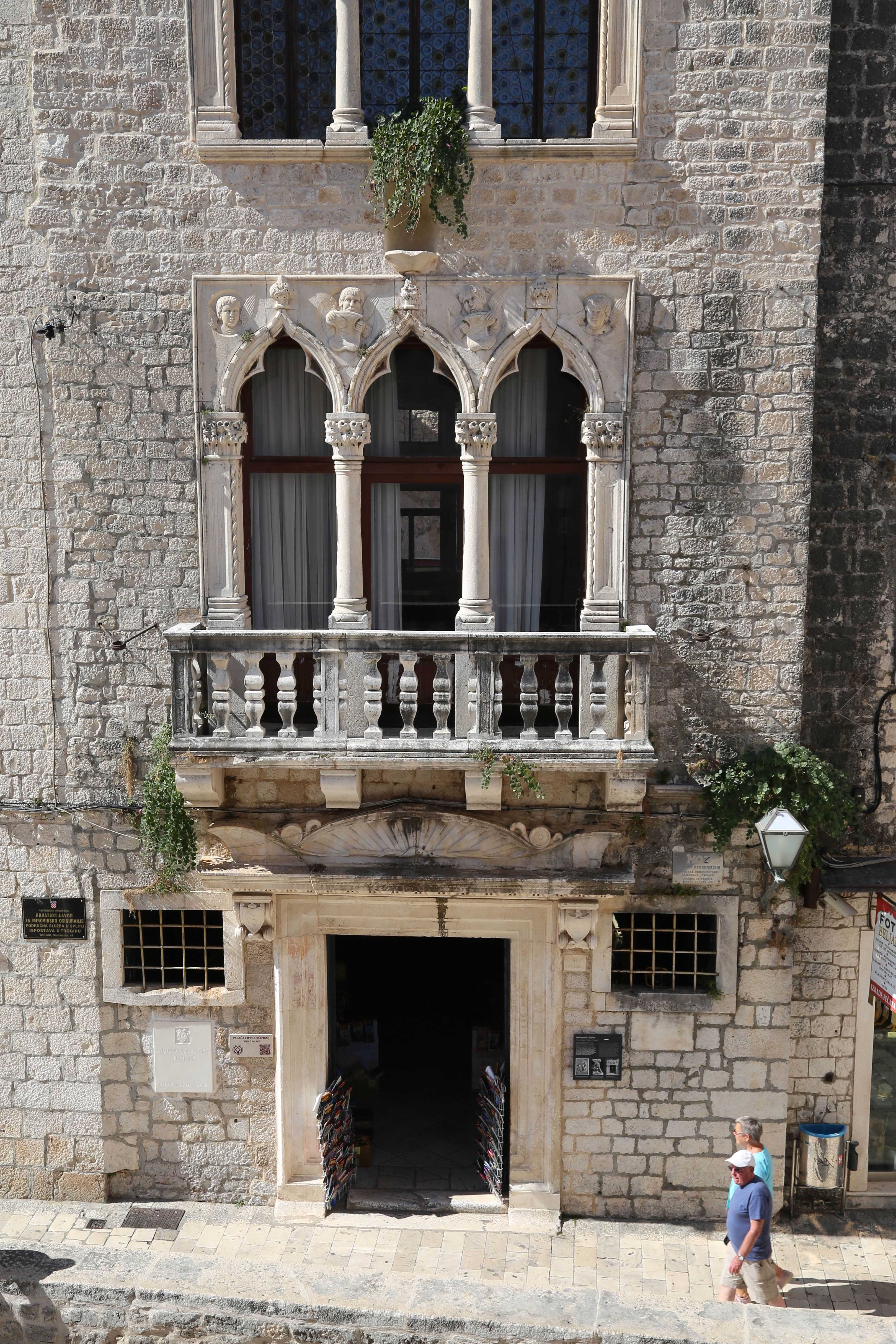 Slender pillars popularized by the architecture of the Venetians are graceful, the design creates openings for windows, balconies, and archways, and the carvings add detail and beauty, like this element on the Cipiko palace.

Visitors stroll the islet’s streets and imagine life in the old city of Trogir from centuries past, taking in the sights, and snapping photos. The dearth of cars and slower pace makes it clear there is as much charm and beauty in Trogir today as there was 2,300 years ago when the first settlers stepped ashore and decided to call it home. 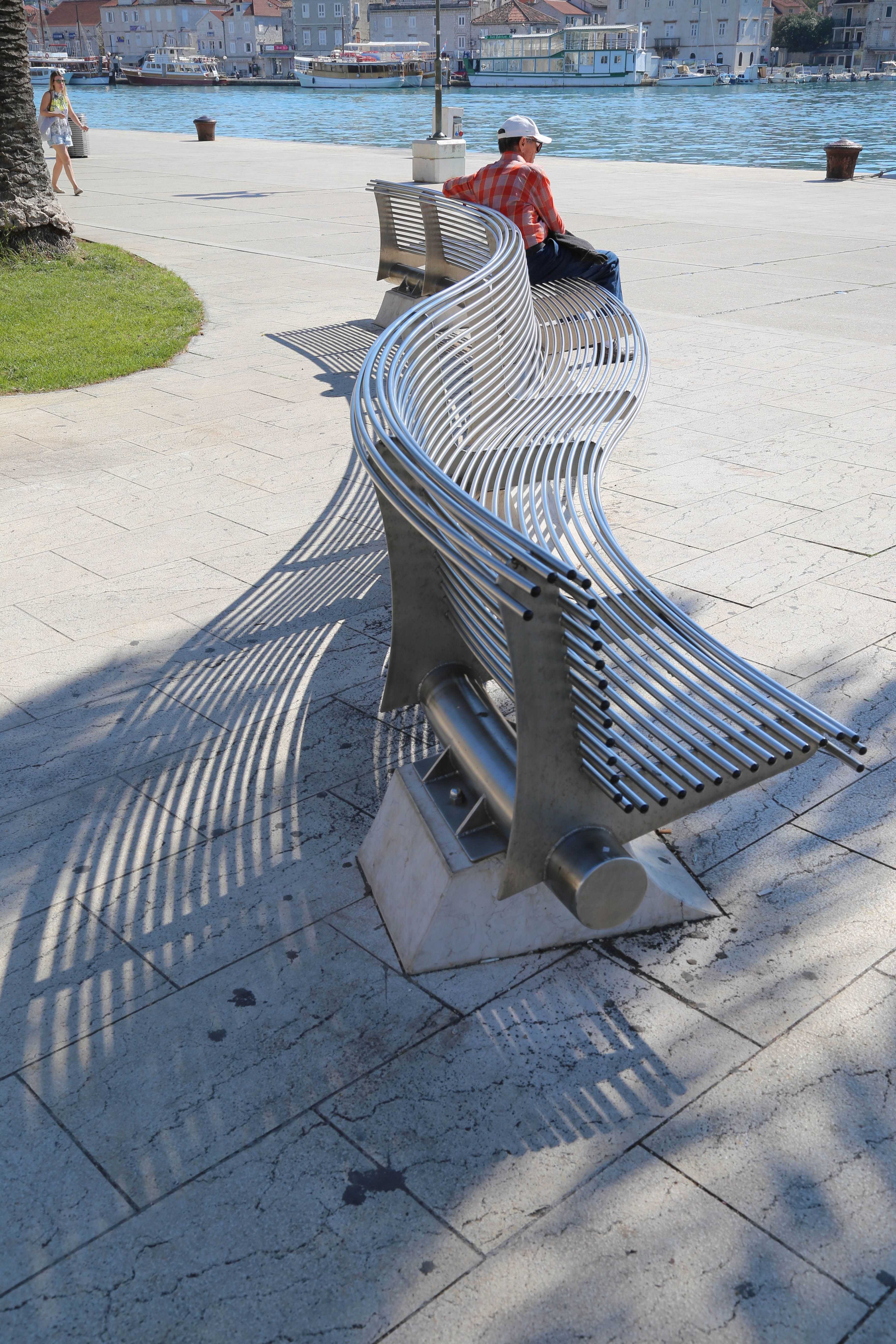 Torgir has a grand promenade where visitors can stroll or relax on a bench and watch the world go by.

For more information about the old city of Trogir, click over to these websites: