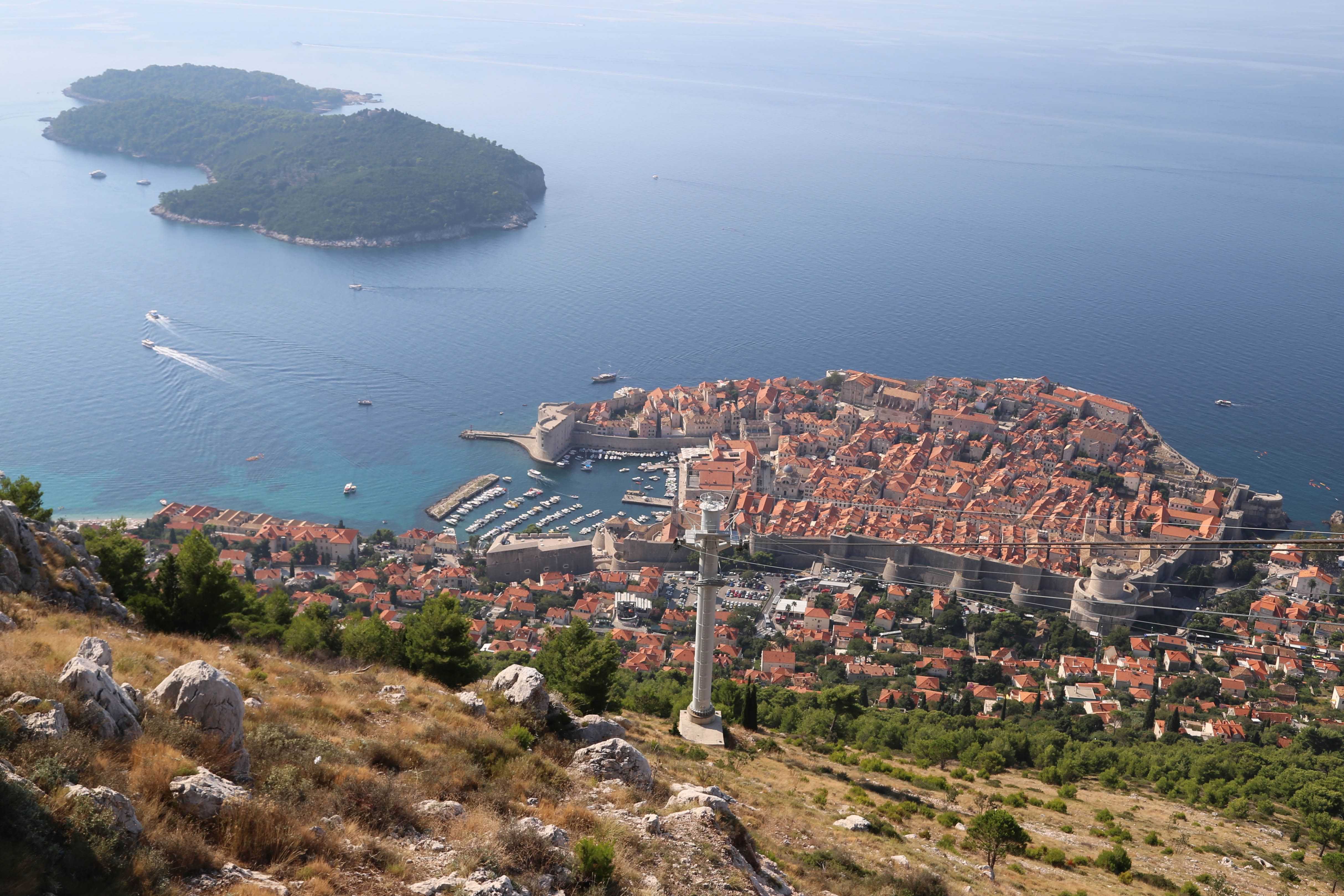 Once Mother Nature set her hand to task she took special care when she arrived at a spot along the Adriatic Sea. She graced it with a secure foothold at the water’s edge, erected rugged mountains for protection from land invaders, blessed the region with a warm and sunny climate to grow crops, provided crystal blue waters, and stocked it with an abundance of sea life to feed people. These are just a few reasons Dubrovnik, Croatia is called the “Pearl of the Adriatic.”

More than 1,400 years ago a settlement was established here, around 614 AD. In addition to the reasons cited above there is an excellent harbor for ships and solid bedrock to serve as a base for streets and buildings. A ready supply of limestone was on hand to construct buildings and roads.

But it was the people, or rather the caliber of those people that helped shape Dubrovnik into the city it would become. Over the centuries a succession of Roman, Byzantine, Ottoman, Venetian, Napoleonic French, Hapsburgs,and Astro-Hungarians were drawn to the seaside town. One thing that characterized the people of Dubrovnik was an ethos that might be described as, “Make trade, not war.”

The distinction is significant in a number of ways. Those engaged in war see the world as a zero-sum equation – somebody wins and the other side loses. But people involved in trade seek a win-win scenario; happy customers return again and again and everybody prospers. The more ambitious the traders, the further afield they go to find new markets. For those in Dubrovnik, the sea offered a pathway to abundance.

A long-term benefit to looking beyond the horizon is that one can learn more and better understand the world, and your neighbors. Plus, it gives you the chance to adopt the best of new ideas. By the 10th and11th centuries Dubrovnik had gained a solid reputation as a trading center.

Some of the ideas embraced by the people was the adoption of modern laws and institutions. Dubrovnik also was the first city in the world to establish an arboretum (Arboretum Trsteno in 1492), open a pharmacy in 1317 (the third oldest in Europe and still in business), abolish slave trading in 1418, and construct a city water system in 1438. The bell tower in the old city was built in 1444 and stands more than 100 feet tall.

One of the most distinctive features of Dubrovnik’s old city are the fortress walls. Limestone blocks were being laid as far back as the12th Century and work continued through to the 17th Century. The walls run a course of 1.2 miles, enclose the entire old city, measure in thickness from 13 to 20 feet, and reach a maximum height of 82 feet.

Sadly, April 6, 1667 was a dark time in the Dubrovnik when a devastating earthquake struck and killed 5,000 people and destroyed many of the stone buildings. Despite the devastation the old city was rebuilt.

Dubrovnik continued to grow in prominence. From the 14thCentury through the early 17th Century it was a vassal of the Ottoman Empire. As proof of its importance as a trading center, in the 16th Century (considered her Golden Age), Dubrovnik had consulates in more than 50 foreign ports around the world. The city even had diplomatic relations with a newly emerging United States of America.

The end of World War I and through to the 1990s bracketed a complex time in the Balkan region; it is remembered with fondness by some and a time of troubles by others. At the end of World War I the Treaty of Trianon forced the breakup of the Austro-Hungarian Empire, having a direct impact on the region that would today be Croatia. The result was Yugoslavia. The idea was intended, in part, to unite various Slavic regions into one nation. The firestorm of World War II would again throw the region into turmoil, but it also btought a period of relative calm to an often-fractious part of the world.

Josip Broz Tito became an important figure during World War II, rising to be the leader of the Yugoslav partisans who resisted the Axis Powers, led by Germany. After the war he became Yugoslavia’s ruler and managed to keep peace among the disparate Slavic factions. Ask an older Croatian the difference between ‘then and now’ and many look back fondly to Tito’s rule. People had jobs and healthcare, children were well educated, housing was affordable, families had at least one car, and there was money for clothes and to take a nice vacation. In other words, life was good compared to the privations of earlier ages. But the breakup of Yugoslavia and implementation of capitalism has been difficult for many Croatians, both young and old.

Tito achieved what he did by becoming a member of, and major force within the “non-aligned movement.” These countries (India, Indonesia, Egypt, and Ghana were the other major members), refused to side with the USSR, China, or Western nations (led by the United States). Tito, and the non-aligned leaders, walked a tightrope that kept their relatively weaker nations from being drawn in as pawns into unwinnable political imbroglios. And for decades it worked. But in the end Tito was merely a bandage covering a much deeper wound.

Following Tito’s death in May 1980, a kaleidoscope of quandaries (religious, ethnic, and political), erupted into open warfare, mainly from 1991 through 2001. Fierce fighting, ethnic cleansing and a complete reconstitution of factions into nations resulted. It is estimated as many as 140,000 were killed in fighting and slaughtered by ethnic cleansing. As many as 35,000 women were raped. Several million people throughout the region were displaced from their homes and villages and in many places the memories of the war years are still bitter. Much of the fiercest fighting took place in Bosnia and Herzegovina, and Kosovo. Dubrovnik was under siege for approximately seven months.

But the people of Croatia, like her neighboring countries,are resilient and are rebuilding one step at a time. The success of Dubrovnik is an excellent example of this. The special nature of Dubrovnik has been recognized for centuries and in 1979 UNESCO recognized the walled city of Dubrovnik as a World Heritage Site.

The financial bedrock for Dubrovnik is tourism. One sector, cruise ship passenger traffic, has grown so much that it is now a burden; in 2013 cruise passengers topped one million, placing a severe strain on the old city, Dubrovnik’s main attraction. The problem is so severe that UNESCO has warned Dubrovnik that it is in danger of losing its World Heritage status because the crush of visitors is having a negative impact.

But day-tripping cruise passengers aren’t the only contributor to Dubrovnik’s ever-growing number of tourists. The wild success of the HBO television series “Game of Thrones” is adding to a phenomenon called “set-jetting” where travelers want to see the places that have become iconic locations for their favorite movies and television shows. The walled city of Dubrovnik has served as the locale for King’s Landing in “Game of Thrones,” making it a must-see location.

A growing tourism sector impacts Dubrovnik (42,600), in several ways. Tourism is all about location, so more tourists means more opportunity. It incentivizes building owners to convert property into more profitable businesses. In 1991 it was estimated 5,000 people lived inside the fortress walls (approximately 239 acres). In 2014 that number was estimated to have shrunk to just 500 residents living inside the walls. Those properties have been converted into shops, restaurants, trinket stores, hotels, and short-term vacation housing. When tourists leave in the fall, the old city virtually shuts down. Dubrovnik is still a more affordable vacation stop than many cities around the world; but it costs around twice as much as other cities in Croatia.

Despite the challenges facing the city, it remains an incredibly beautiful place to visit. What the great Irish playwright Bernard Shaw said in 1929 still holds true to this day, “Those who are looking for paradise on earth should come and see Dubrovnik.”

For more information about Dubrovnik, click over to these websites: