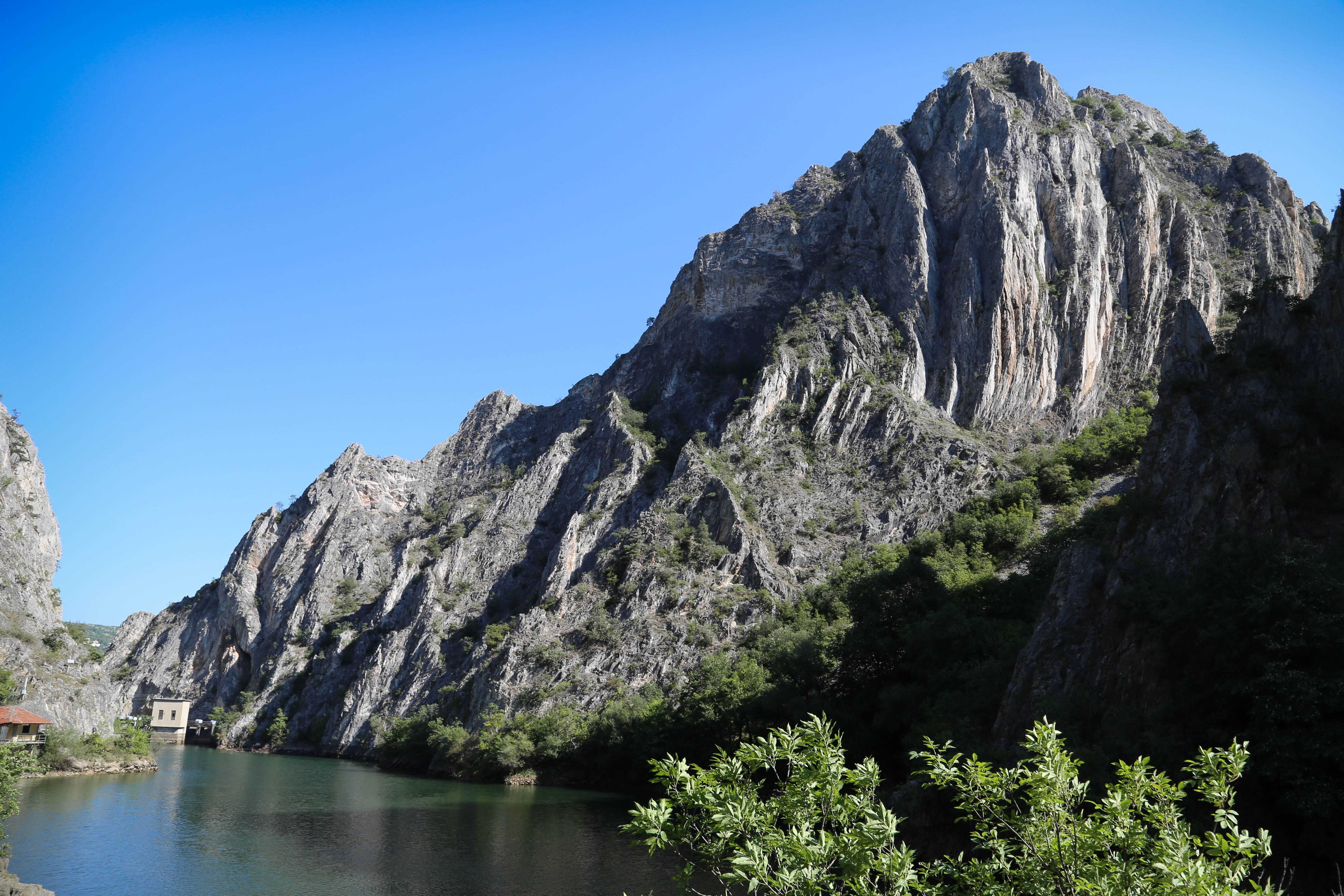 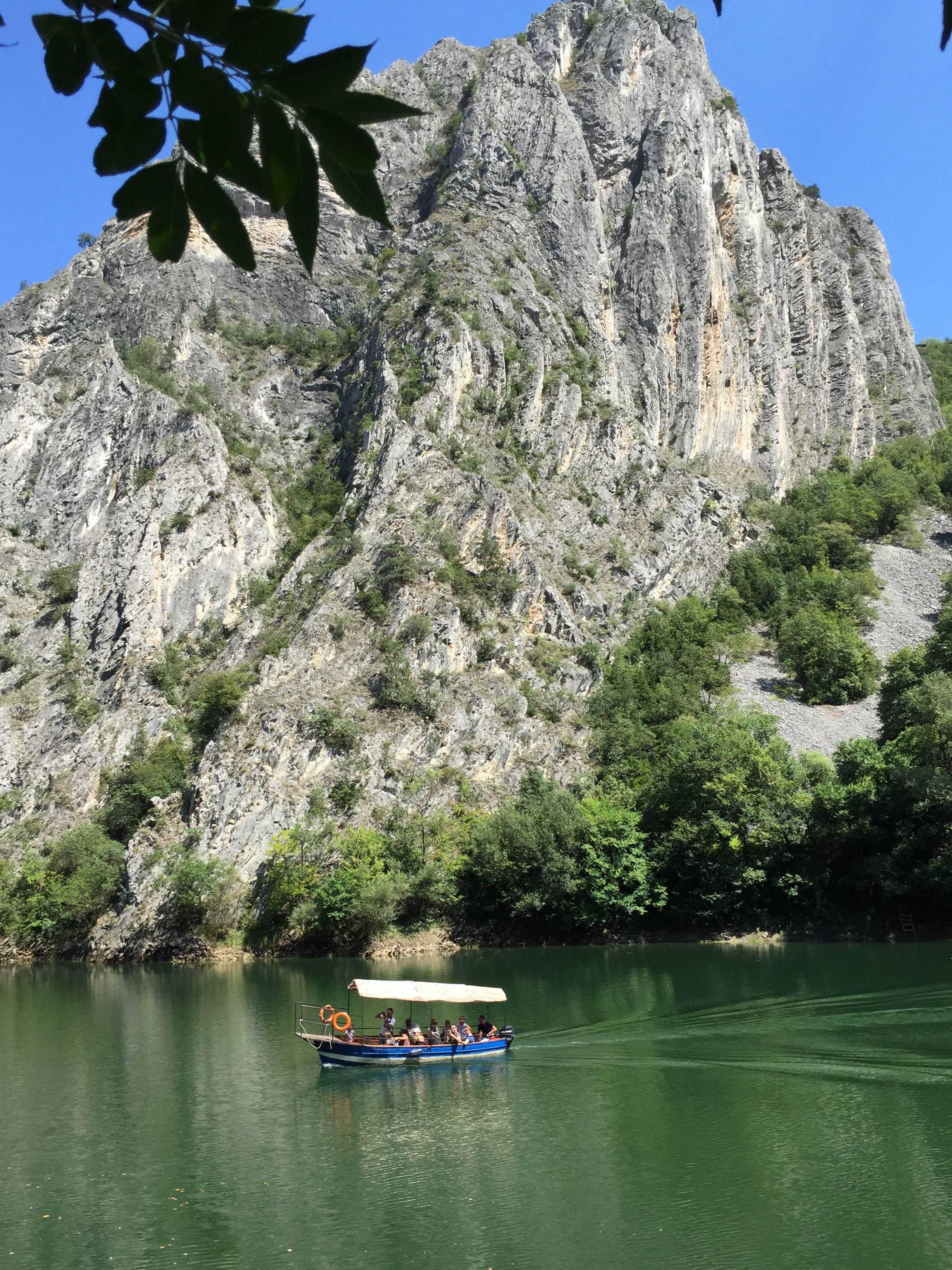 The Treska River is shielded by steep hillsides, making this one of Macedonia’s popular outdoor areas, as a passenger boat returns a group from Vrelo Cavern. 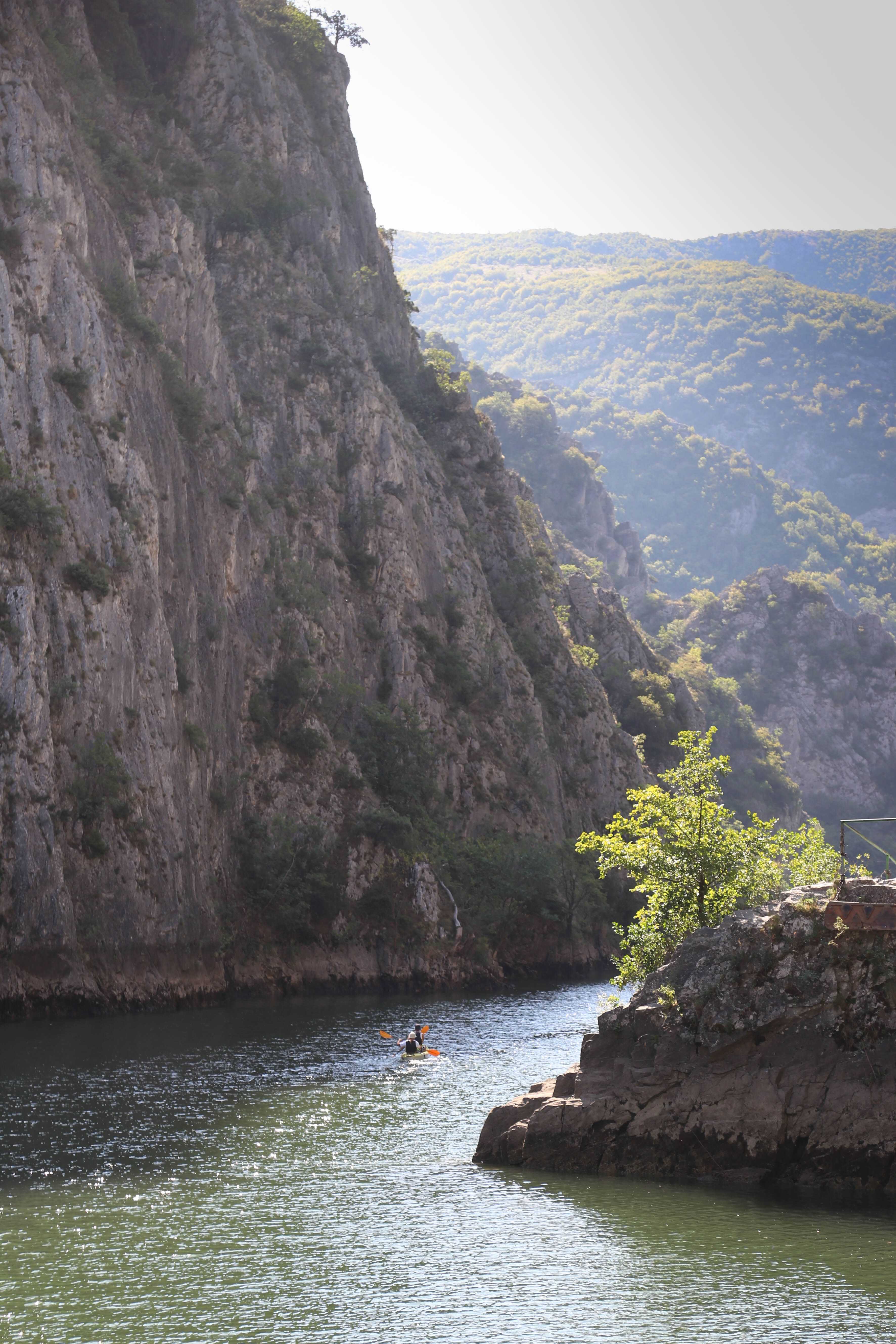 A pair of kayakers enjoy a late summer day as they paddle along the Treska River.

As a place, Macedonia is a land of rugged beauty with sharp, vertical mountain peaks, agricultural areas that are mostly pasture, a mild summer climate, and a place of meager rainfall. Within this region of the Balkans, Macedonia has been a crossroads for several thousand years; it has been settled, resettled, and fought over long before history was being written down. Even the name Macedonia has been a source of contention because Greece, behaving like a pettifogger, has blocked Macedonia from being formally called Macedonia. The word “Macedonia” is thought to mean either “the tall ones” or “highlanders.” 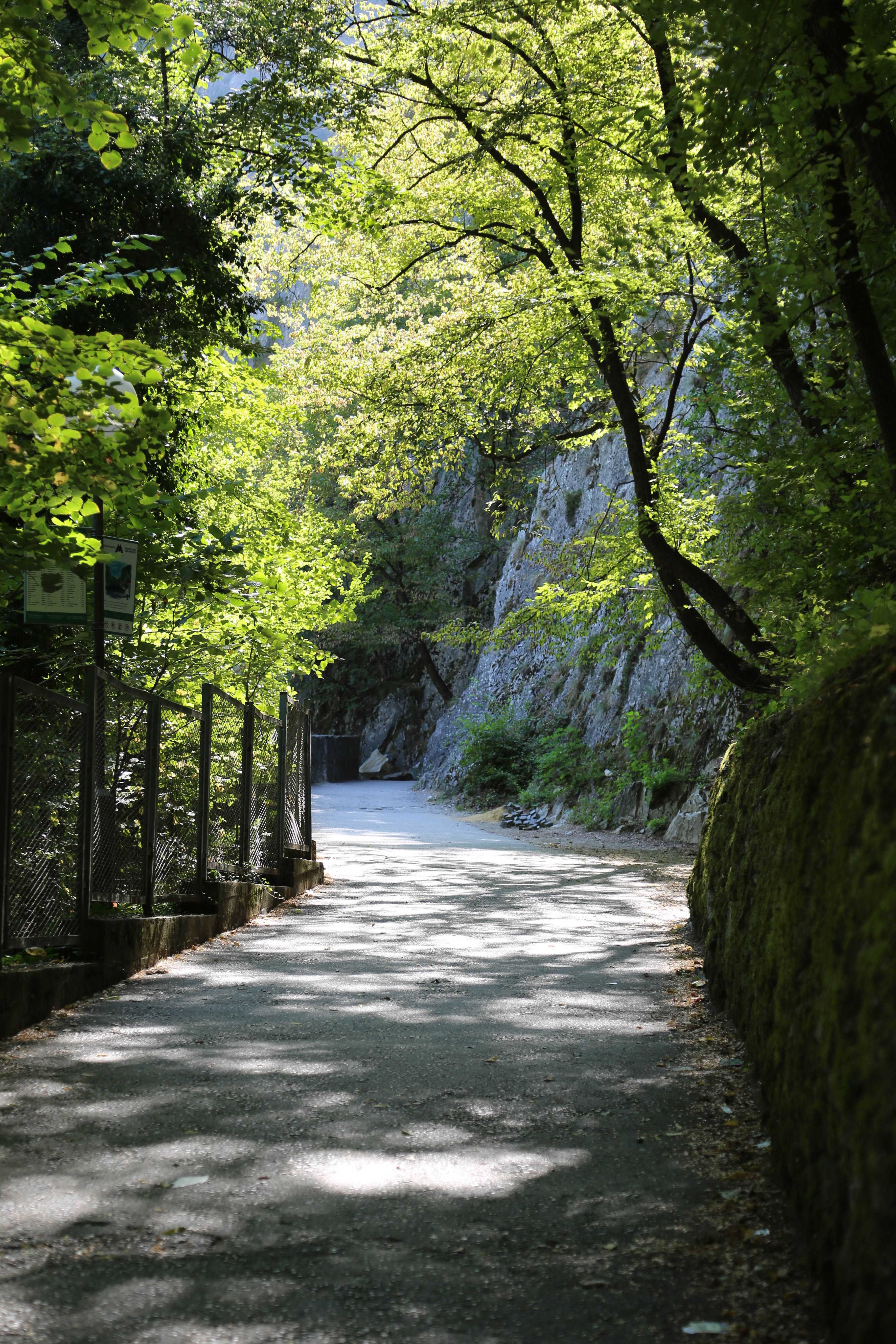 There are some lovely walkways that evoke a timeless sense of beauty and a relaxing stroll among the trees at Matka Canyon. 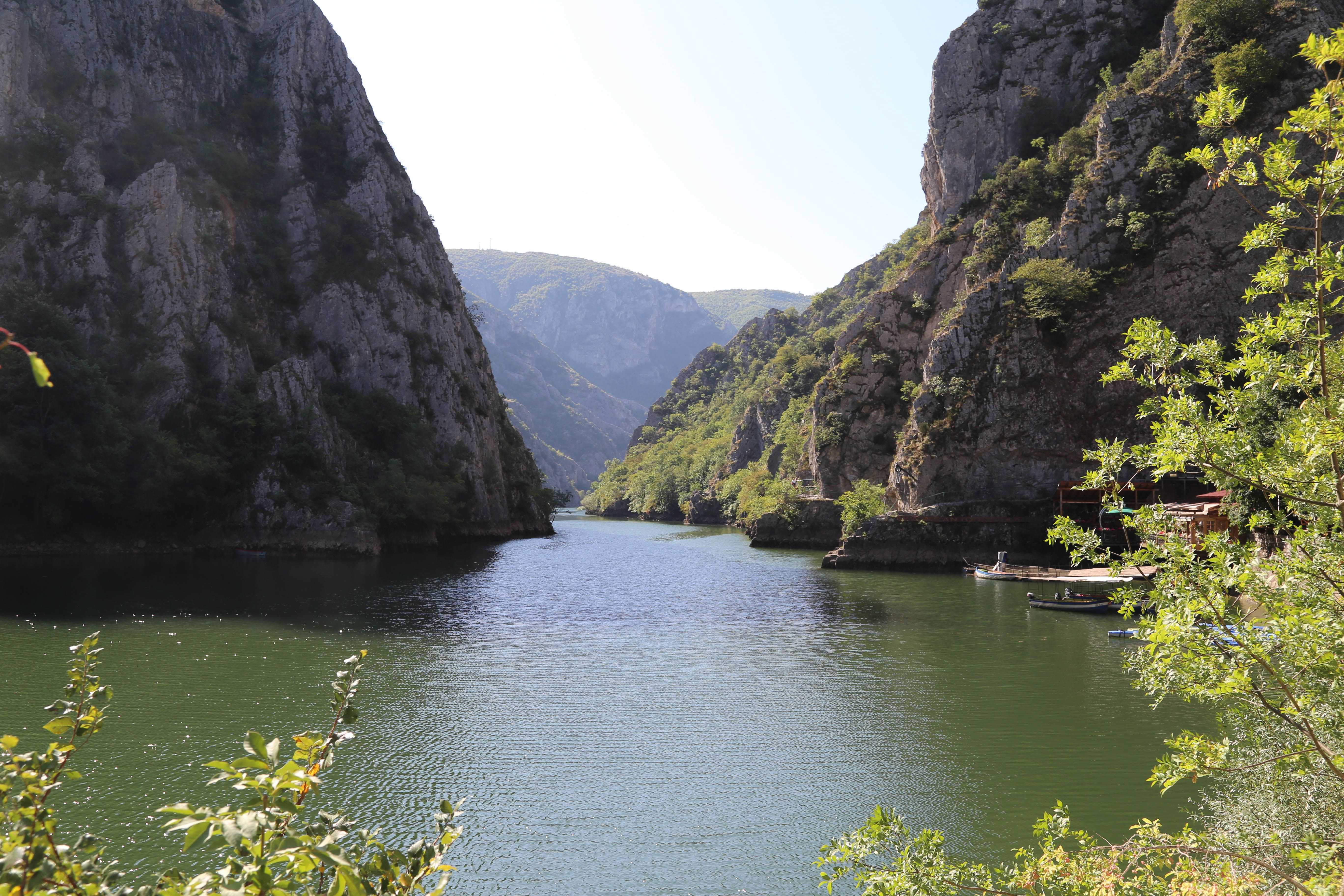 The Balkans, where Macedonia is located, are affected by two major tectonic forces, the African and Eurasian plates. It accounts for the steepness of the mountains and hillsides, as well as the frequency of earthquakes. The capital, Skopje, about 10 miles from here, was devastated by an temblor in 1963.

This is a small nation, both in physical size and population, but in the northern end of the country, about 10 miles west of the capital, Skopje runs the Treska River. There you will find Matka Canyon. From the air, the canyon looks as though a giant red-hot knife sliced a jagged gash through the steep mountains. The river is narrow enough that in a few places you could hurl a stone from one bank to the other. Several things make Matka Canyon special, and it is well worth a visit for anyone who loves nature, history, and is lucky enough to be visiting Macedonia. 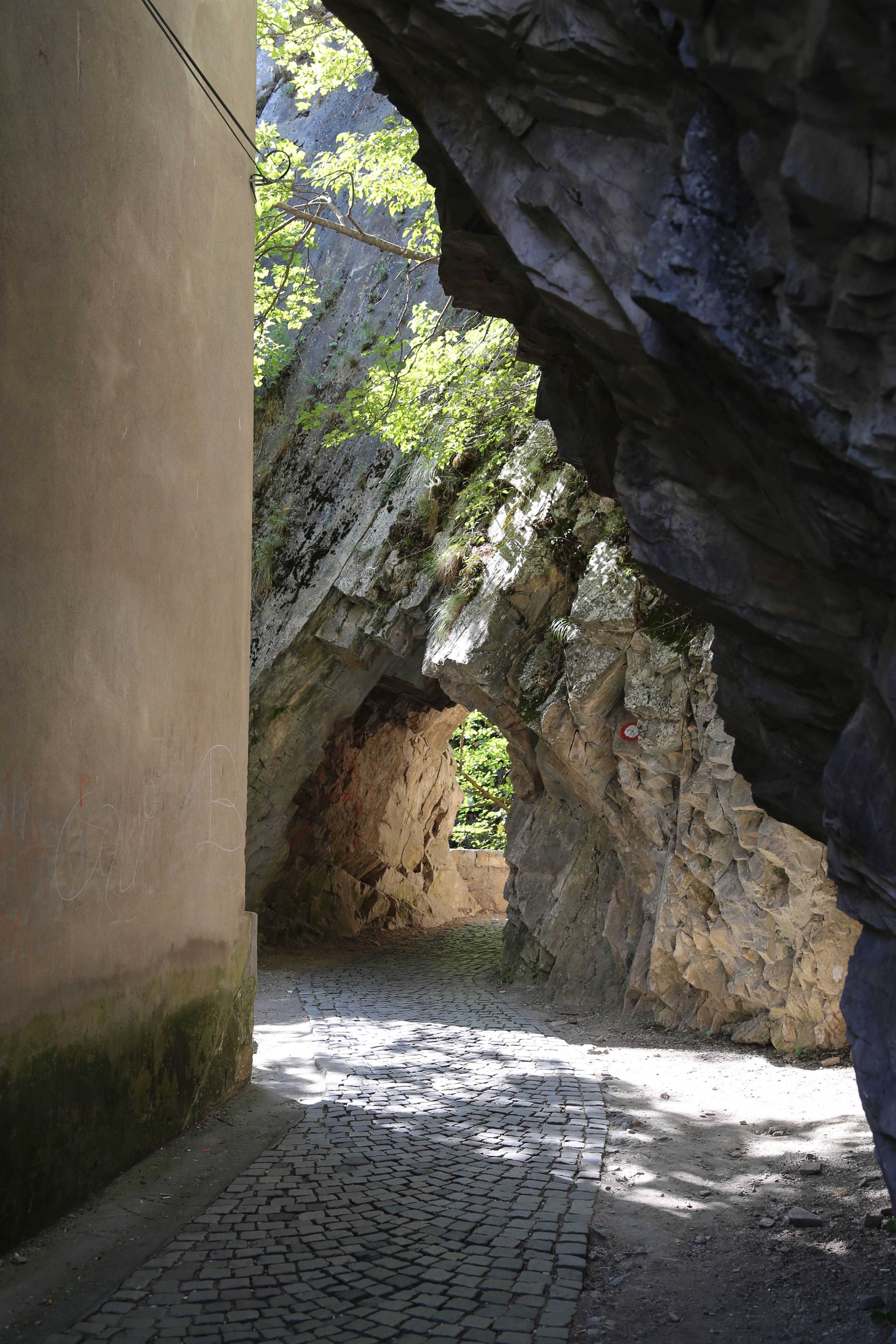 As you walk along some of the pathways, be sure to keep an eye out, as sometimes the walls close in on you. 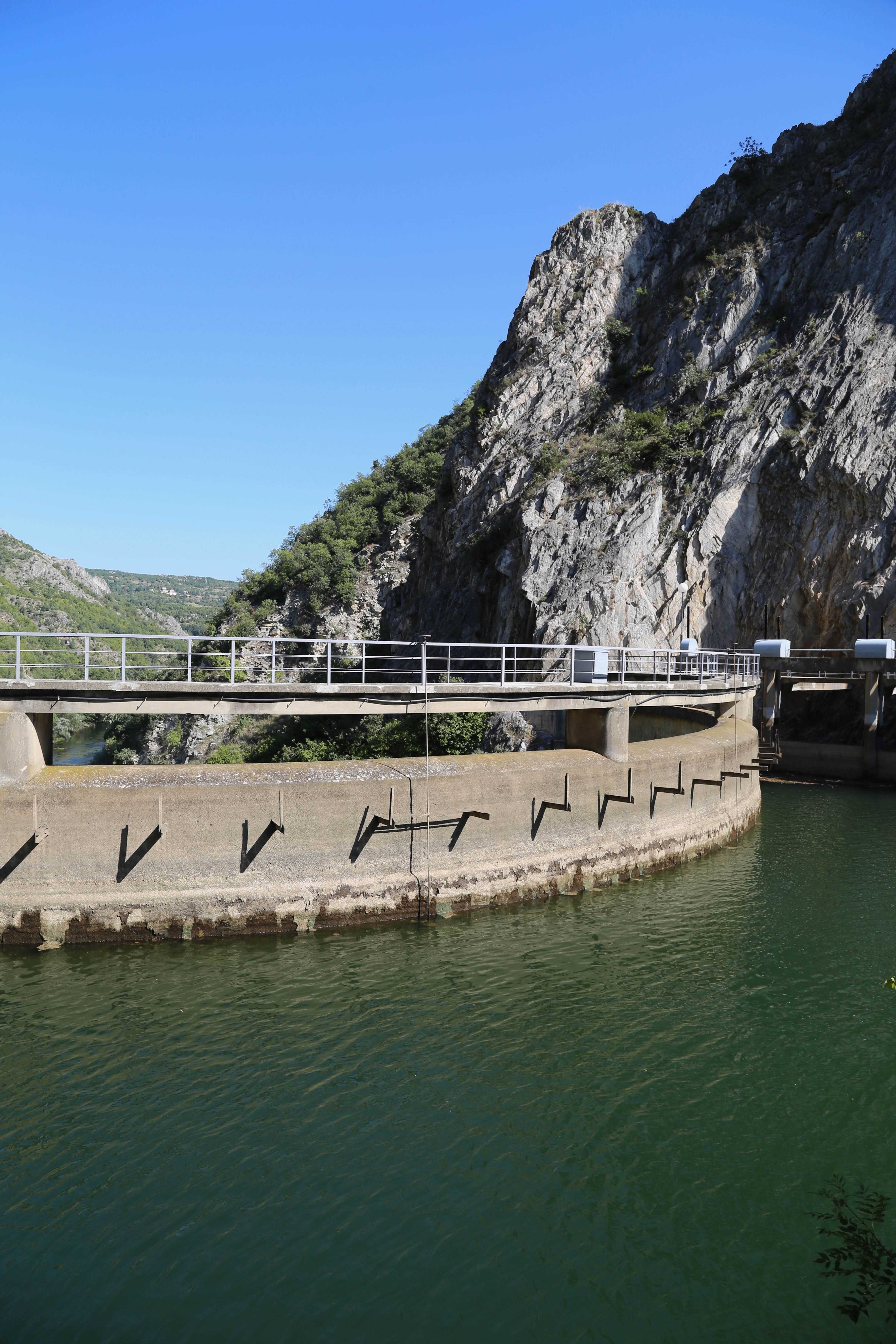 Matka Dam was constructed in 1937 and the result was Macedonia’s first artificial lake and hydroelectric dam. The construction of the dam raised the level of the river, which is thought to have inundated the underwater cave, about one-and-a-half miles upstream from this point. 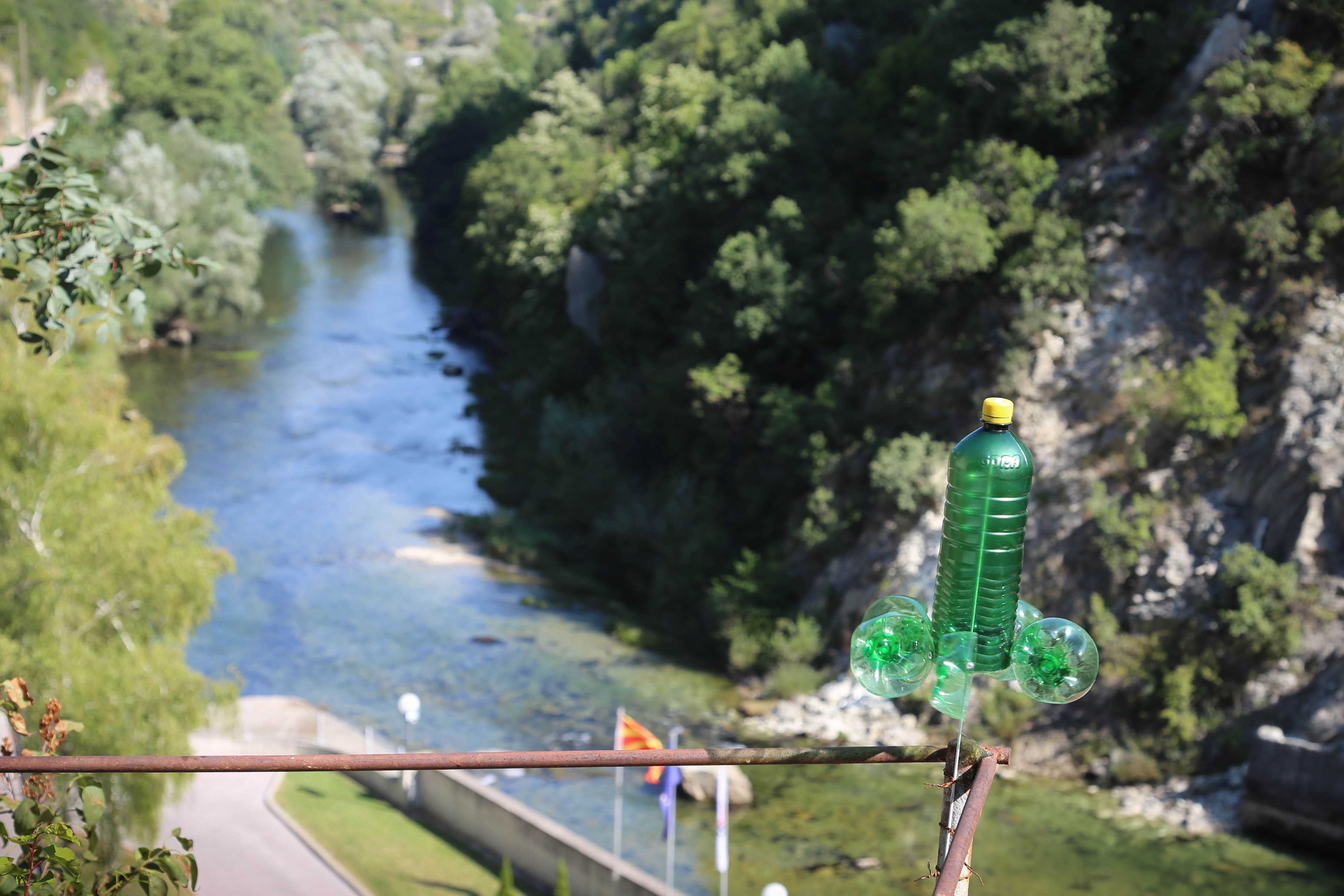 An anemometer measures the speed of wind, and a few plastic soda bottles will do just as good a job as a fancy high-tech version. 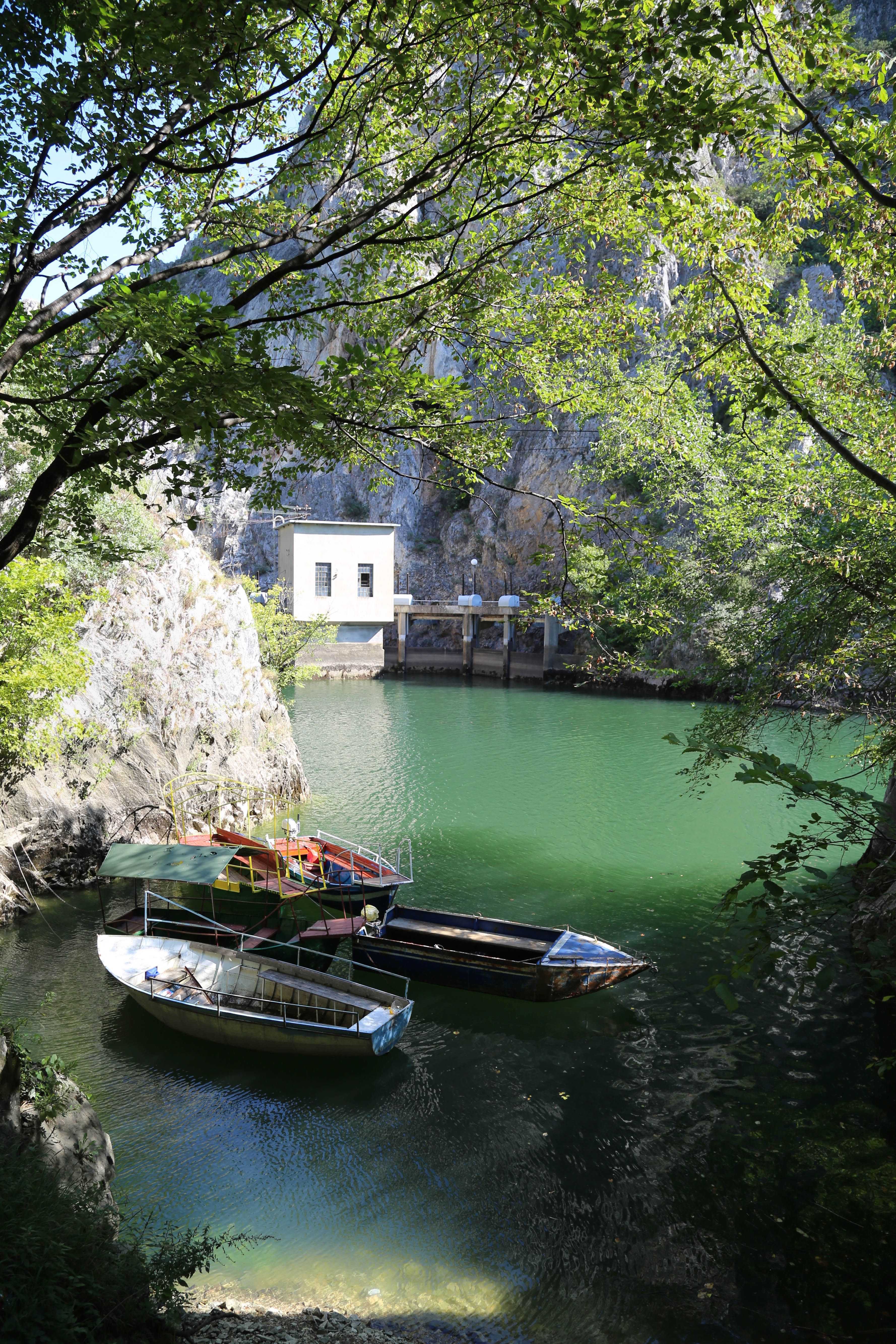 A view along a path, looking back toward Matka Dam, as a few passenger boats sit idle, waiting for people to take them up the river to the cavern.

The river was enlarged when the Matka Dam was constructed in 1937, making it both the oldest artificial lake and first hydroelectric dam in Macedonia. The canyon is 12,300-plus acres of steep hillsides covered with trees. It is one of the most popular spots in Macedonia for rock climbing and trail hiking. And to add to the sense of antiquity there are several chapels and monasteries dating from the 14th and 15th centuries. 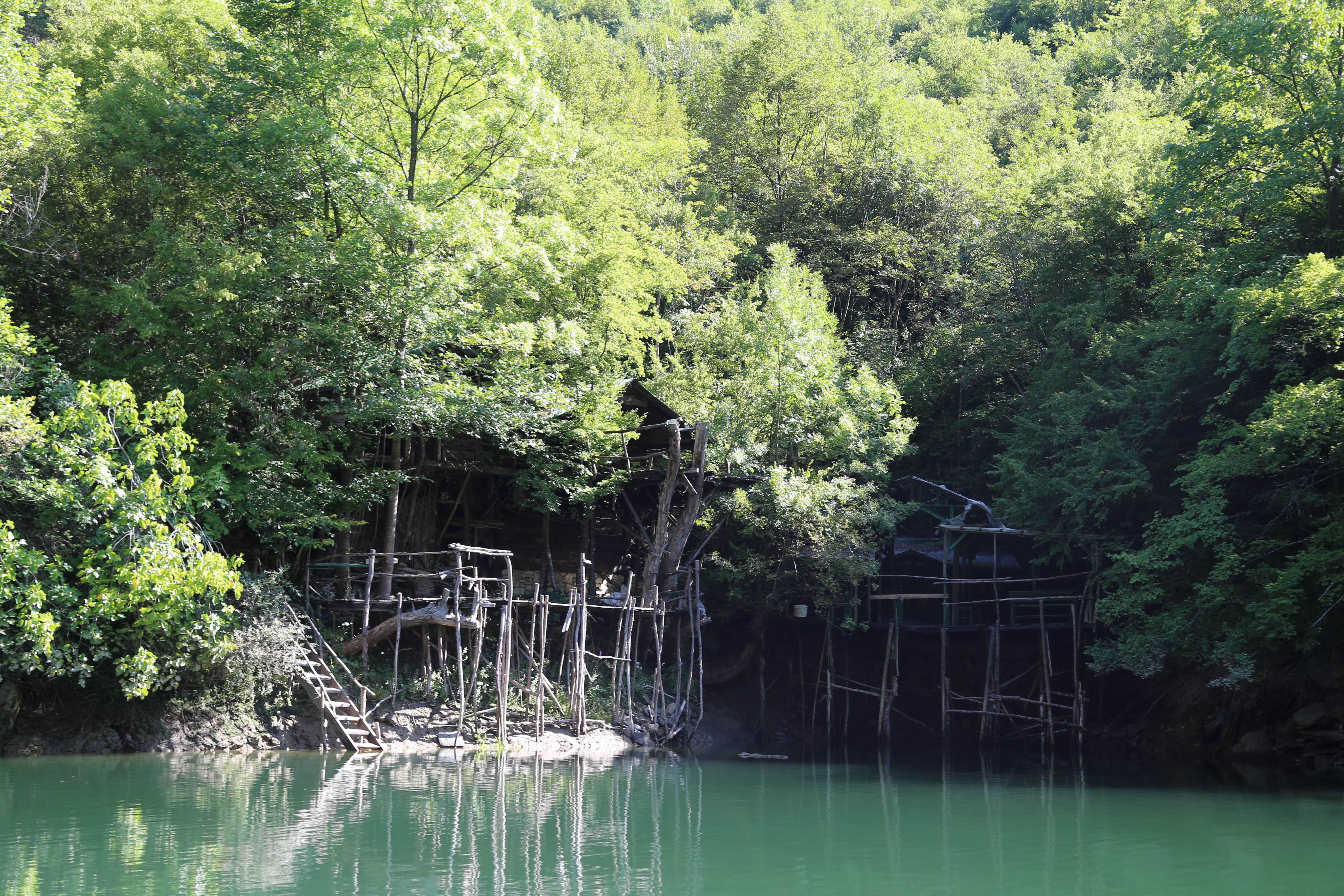 At several spots along the Treska River are vacation homes, tucked in at the water’s edge and hidden in the trees. 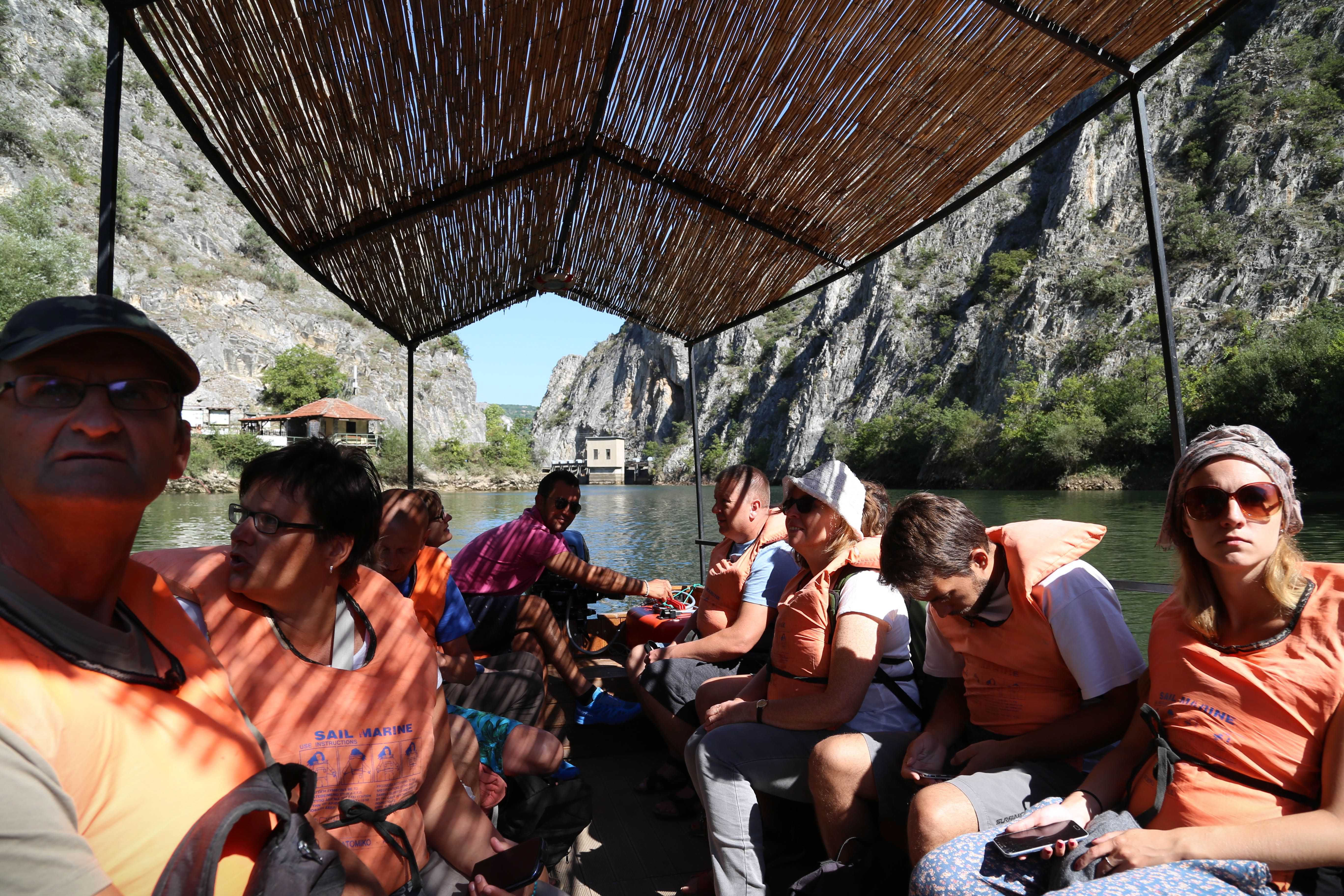 A group of visitors enjoy the easy ride up the Treska River enroute to Vrelo Cavern.

The canyon also is home to several caves. The most famous is Vrelo Cavern and underwater cave (the only cavern in Macedonia that is a tourist attraction). It is relatively small compared with other caverns around the world, and its underwater cave is thought to be one of the deepest, extending down nearly 1,100 feet. It is the deepest underwater cave in the Balkans and the second-deepest in Europe. But for the less adventurous (underwater cave diving is a high-risk endeavor that should be done only by highly skilled divers), a visit to the cavern offers a cool respite and interesting sights. 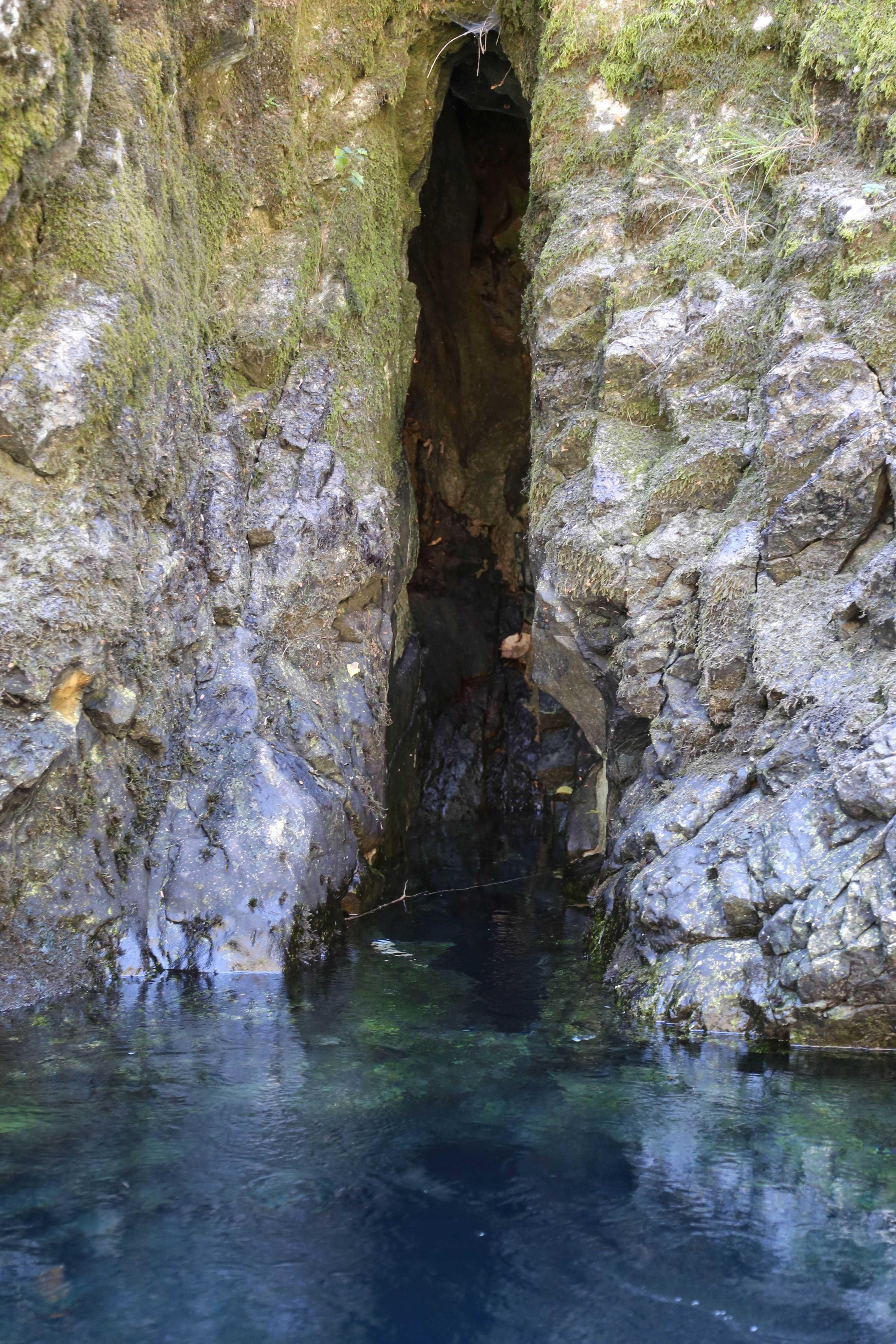 This cut is an entryway where highly skilled cave divers access the underwater cave of Vrelo Cavern. 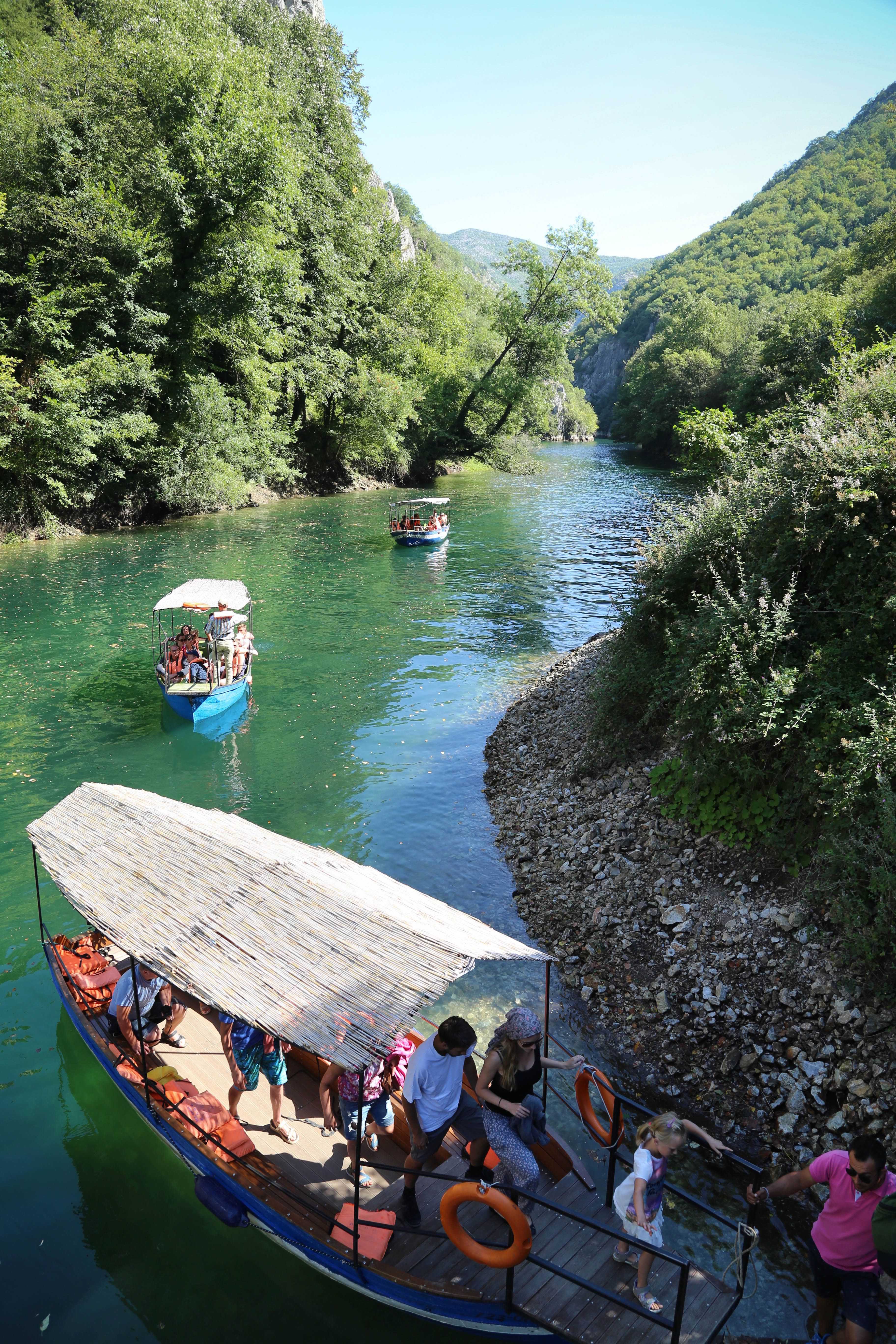 A group of passenger boats queue up to unload visitors about to tour Vrelo Cavern. 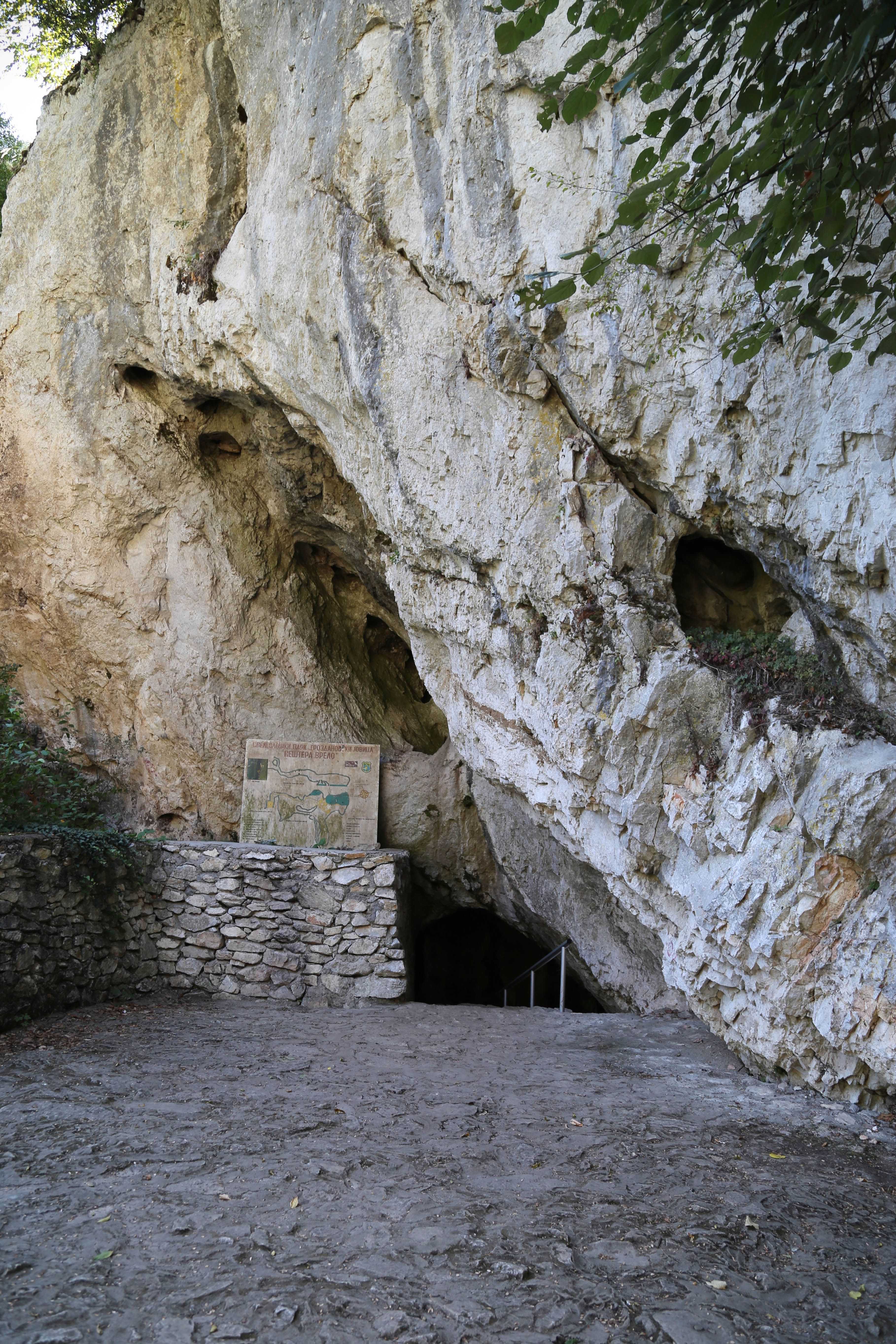 It might be easy to miss the entrance of the cavern, except for the bit of stone work and finished pathway. 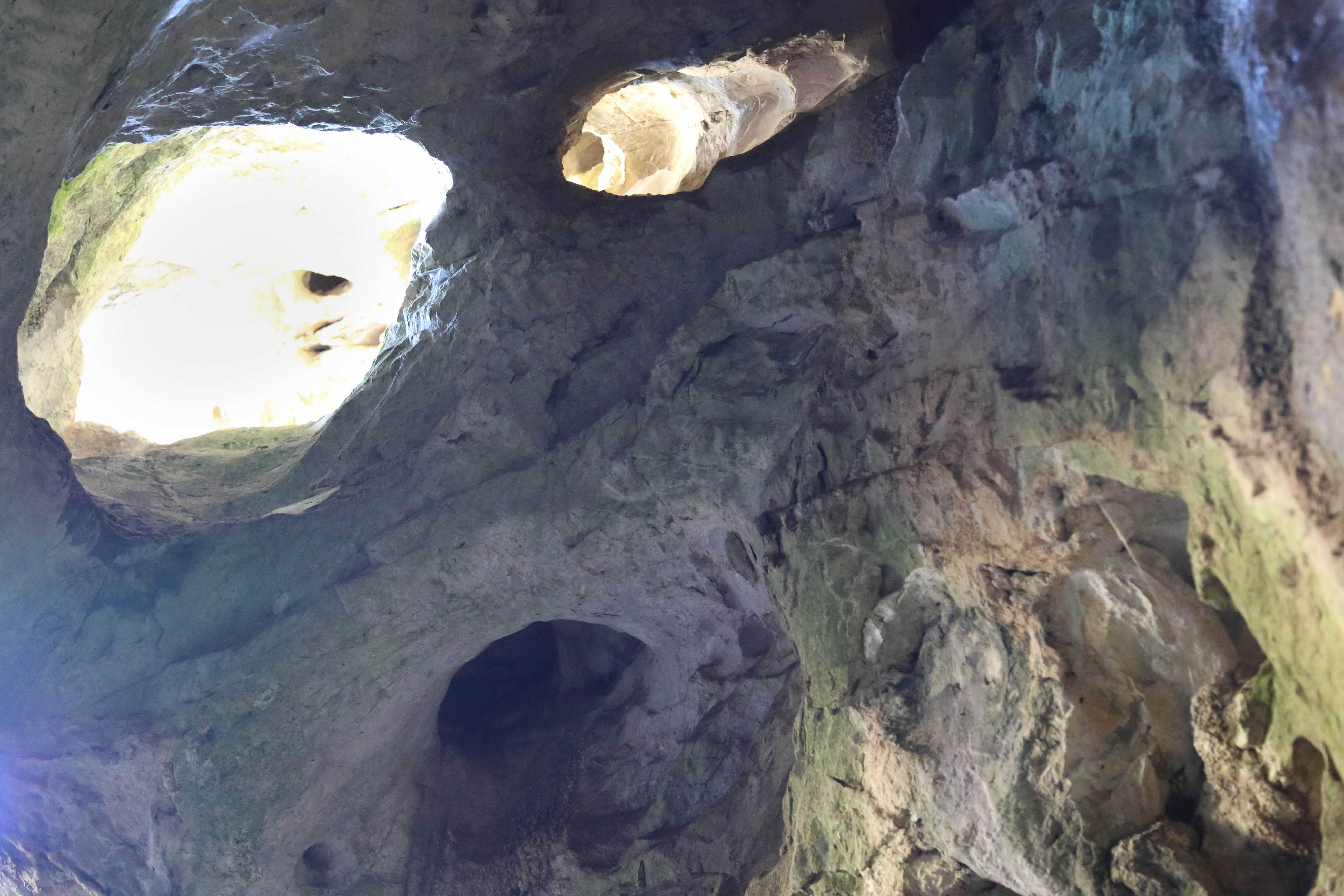 Notice in the photo above that the “eye holes” provide a bit of natural light into the cavern. 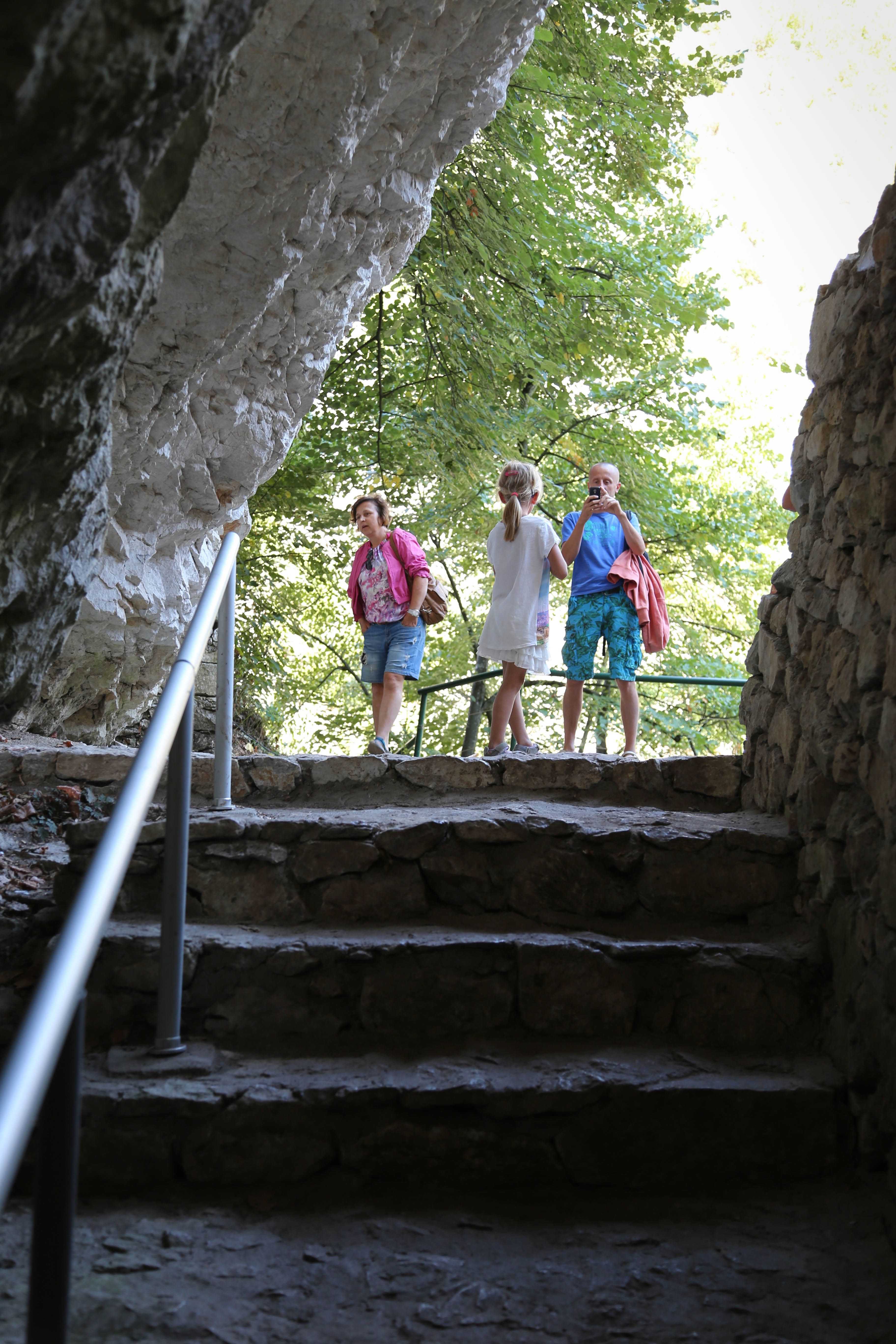 The entryway to the cavern is just a few minutes down these stairs. 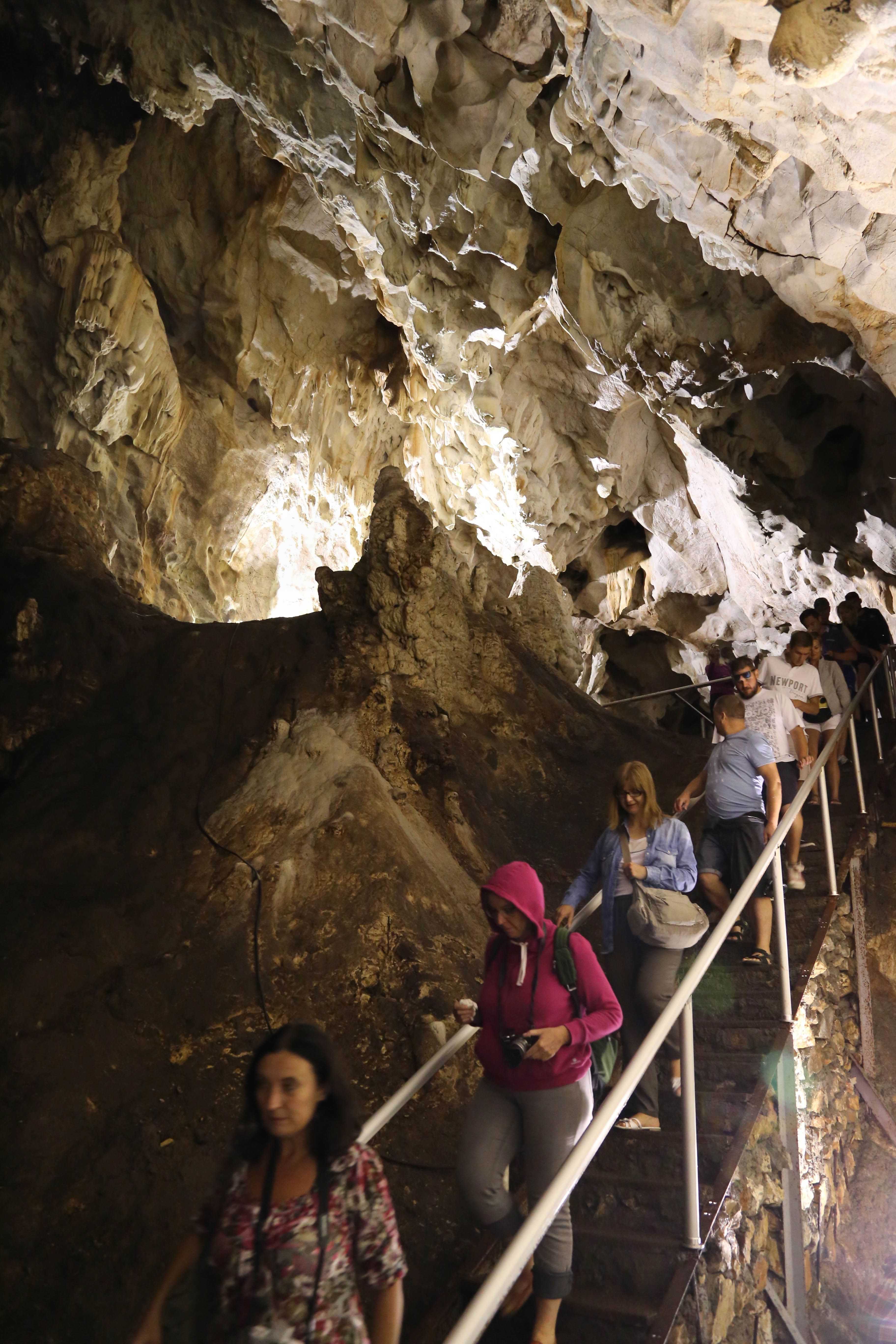 A group of visitors descend the stairs on their visit to Vrelo Cavern.

The cavern has some impressive formations. One of the prime elements is located near the center and it is called the Pine Cone, thanks to the erosive effect of water and limestone. And tour guides are sure to point out one of the small pools of water is named “Russian Beach” because a Russian ambassador to Macedonia insisted on swimming in the pool during a visit there. 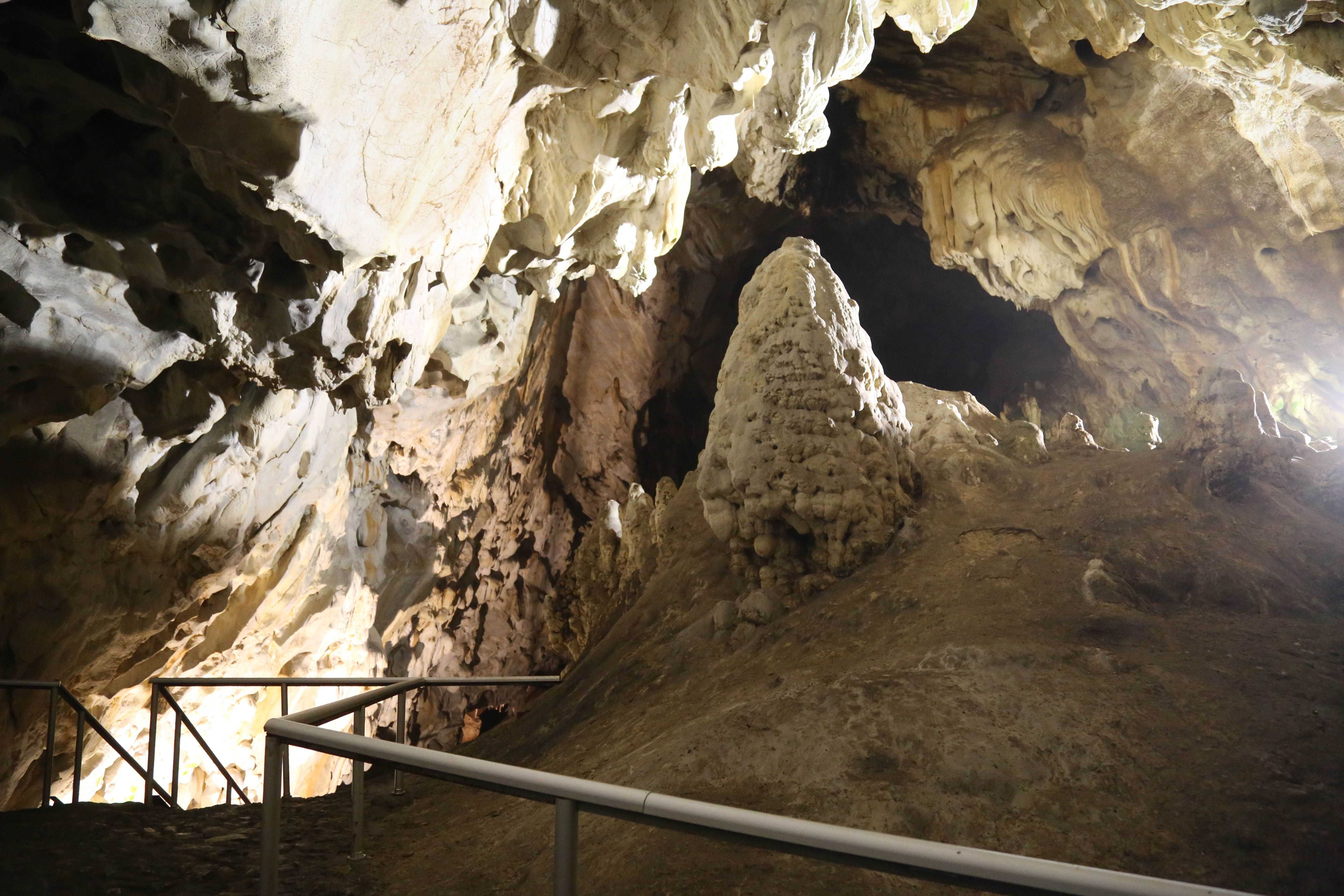 The Pine Cone, named because of the way it looks, is one of the prominent features of the cavern. 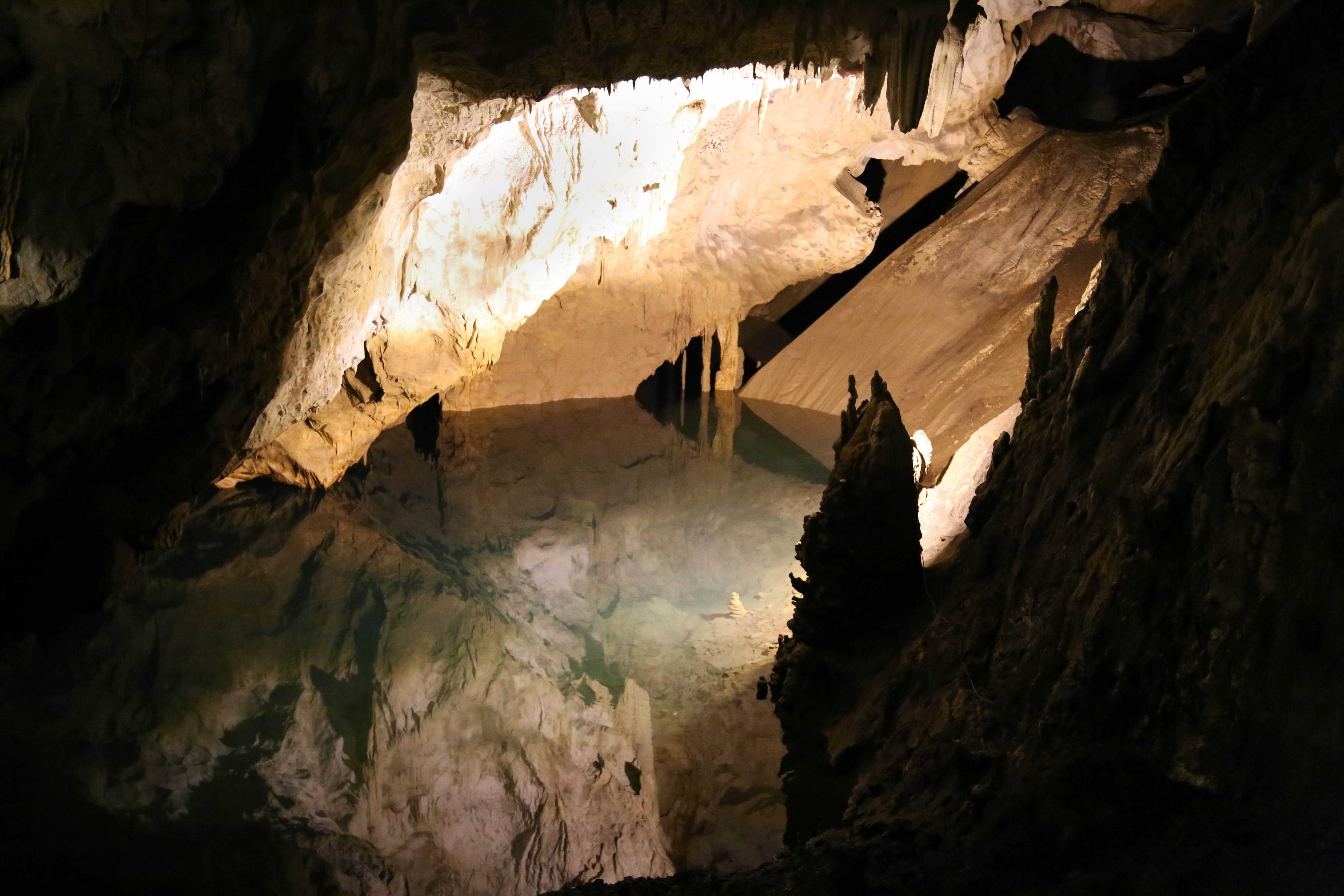 This small pool of water has been nicknamed “Russian Beach” when a former Russian ambassador to Macedonia insisted on taking a swim there during a visit to the cavern. 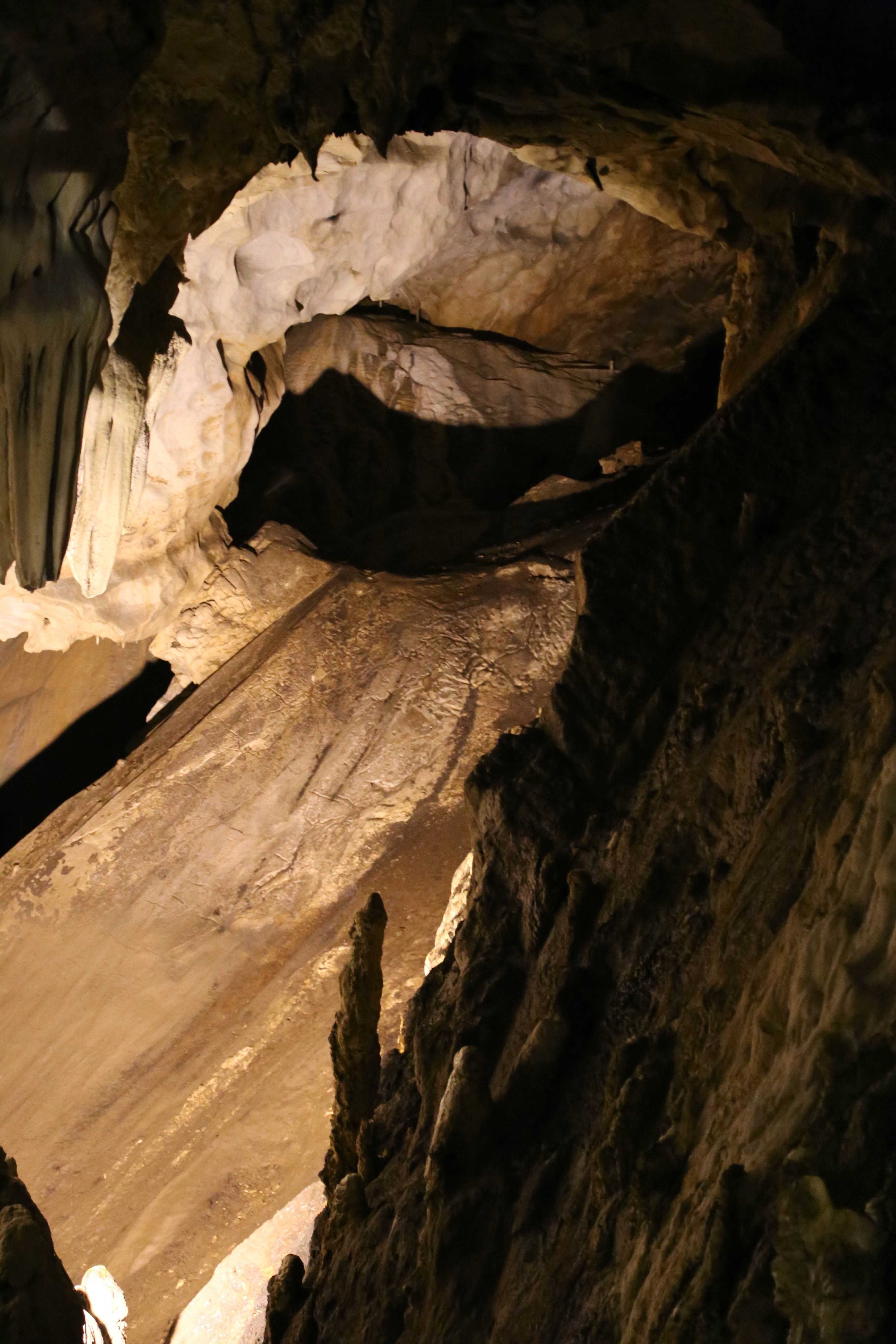 The cavern may be small, when measured against others around the world, but it holds some interesting formations. 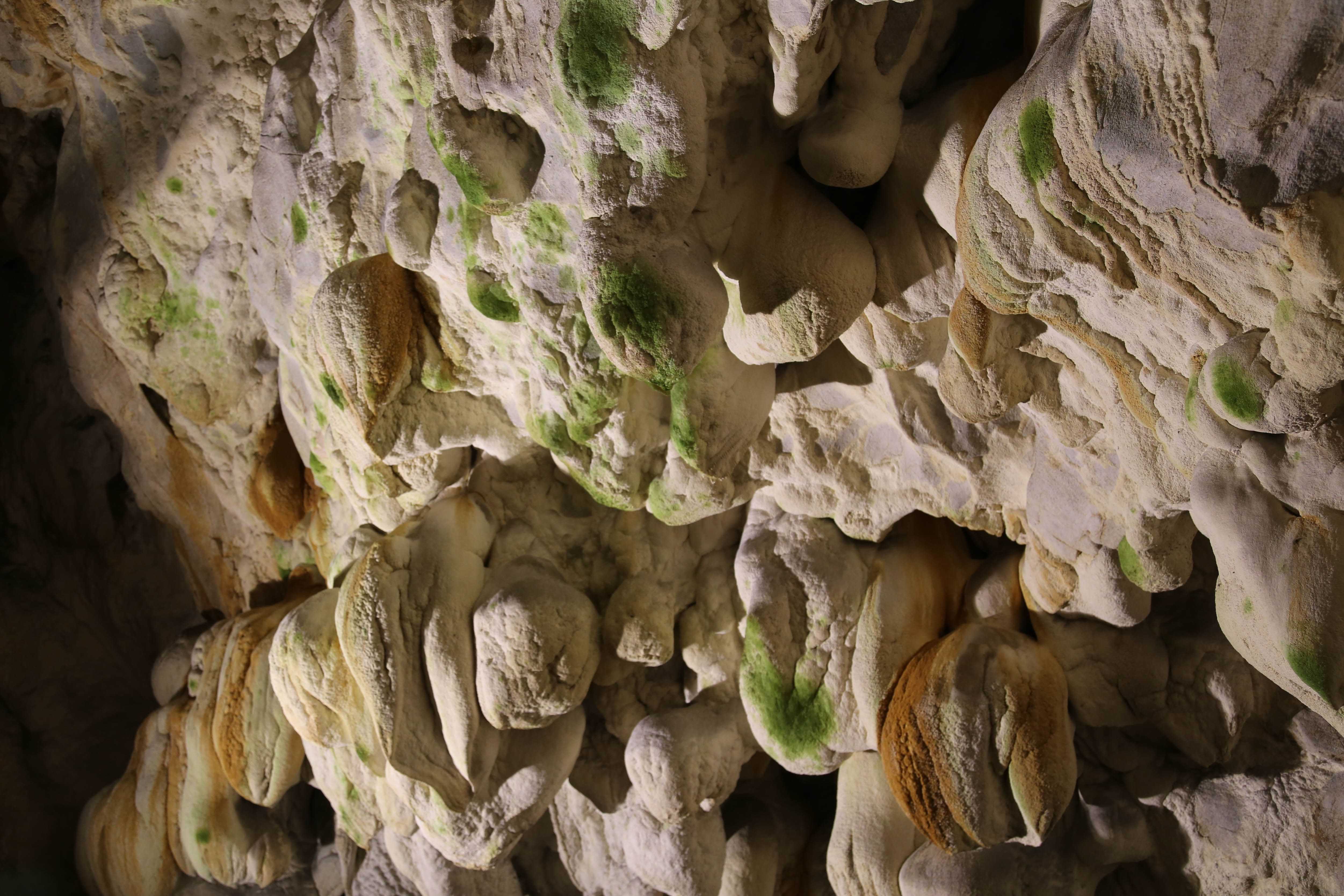 The climatic conditions provide a good breeding ground for green and brown algae to take hold along some of the cavern walls. 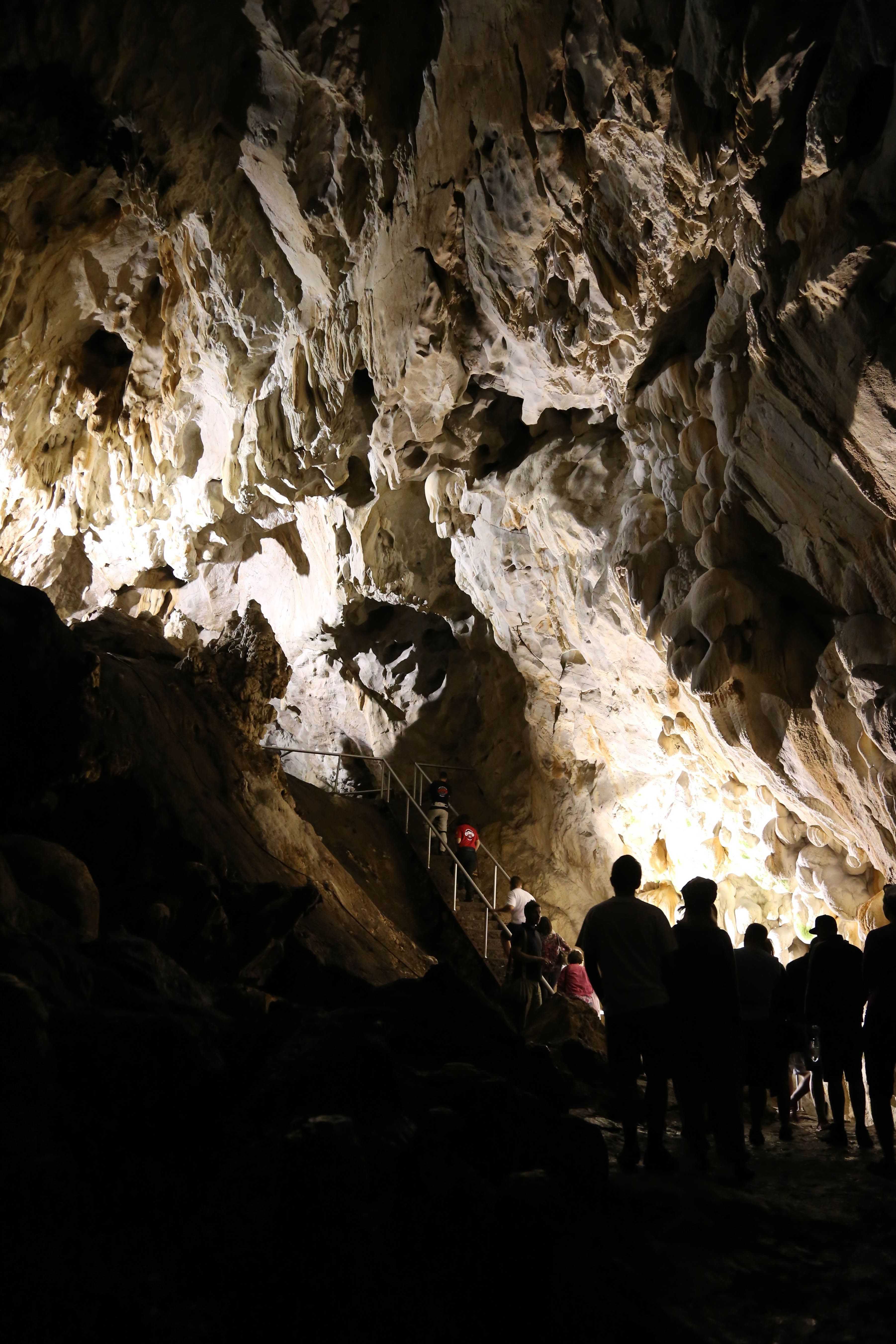 A group of visitors pause to look at the cavern walls as they finish up their tour of Vrelo Cavern.

However, it is only possible to visit Vrelo Cave by way of a river boat. The cavern is about 1.5 miles from Matka Dam and tour boats that hold about a dozen or so passengers gather near the restaurant and bar not far from the Matka Dam. The boat ride is peaceful, and in the summer months you often see kayakers idling along, soaking in the tranquility of a languid day. 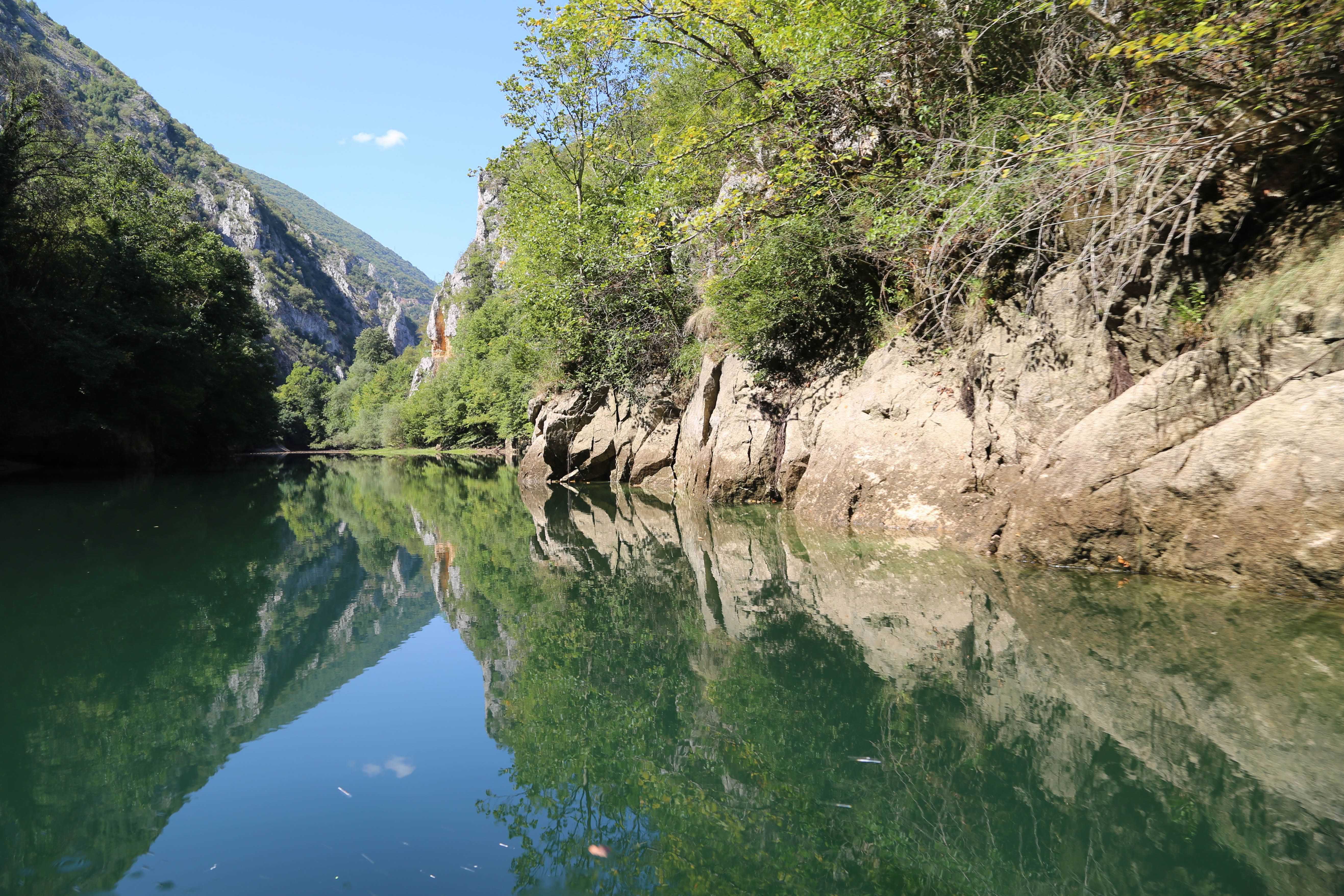 The stillness of the river is literally reflected in the water, indicating the protection the hillsides provide and the relatively low number of visitors to the area. 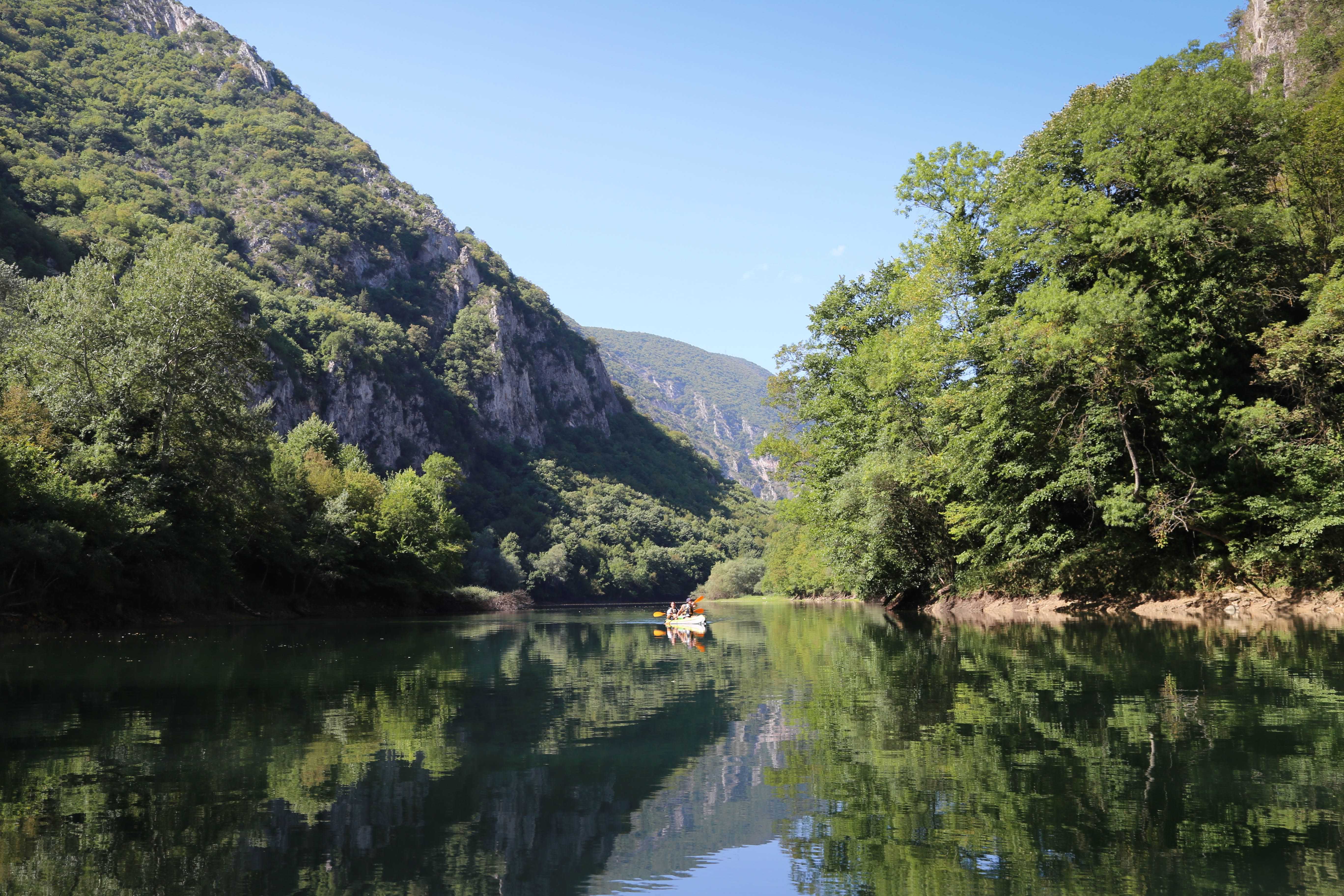 The chance to float along the Treska River, whether in a kayak or in a passenger boat is a great way to relax, slow down, and take in the beauty that surrounds you.

Apart from the cavern you can visit the chapels and monasteries, and access prime rock-climbing areas on foot. One chapel, St. Andrew’s, was founded because of tragedy, an event that also illustrates the complex relationships that occurred in this region of the Balkans. 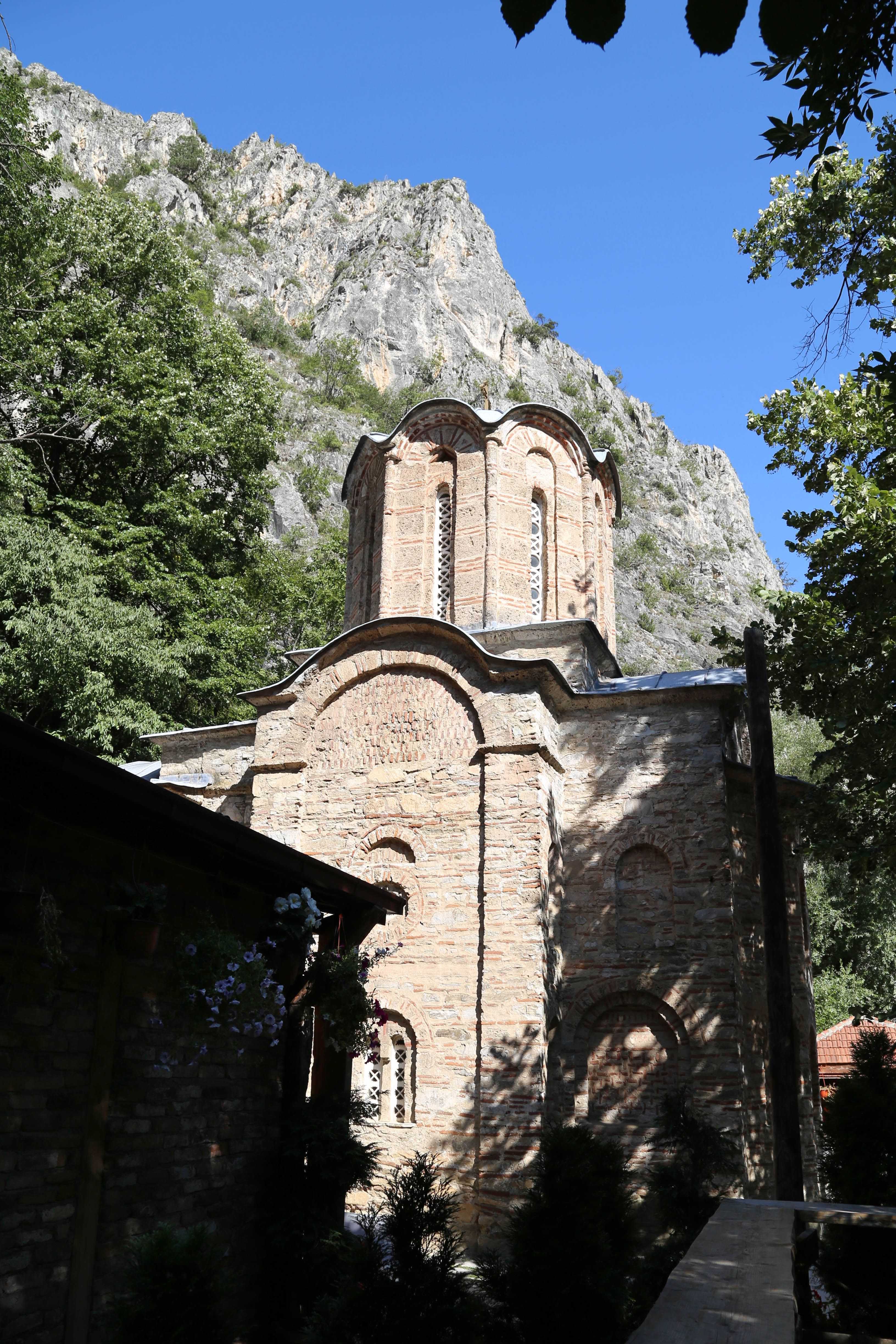 St. Andrew’s chapel stands as a testament to the conflict that Macedonia has endured over the centuries, the tense relations between and among warring factions, and the deep faith that is an important part of Macedonia.

In 1389 King Marko and Prince Andreash (Andrew) were returning from a battle and stopped at a tavern at the end of the day (very near where the present-day chapel now sits). The king tended the horses while the prince went to get food and refreshments. Inside the tavern were some Ottoman Turks. They argued with the prince. A fight broke out and they killed Prince Andrew. Enraged, the king killed the Ottomans and vowed to build a chapel to commemorate the bravery and loyalty of his friend and liege. 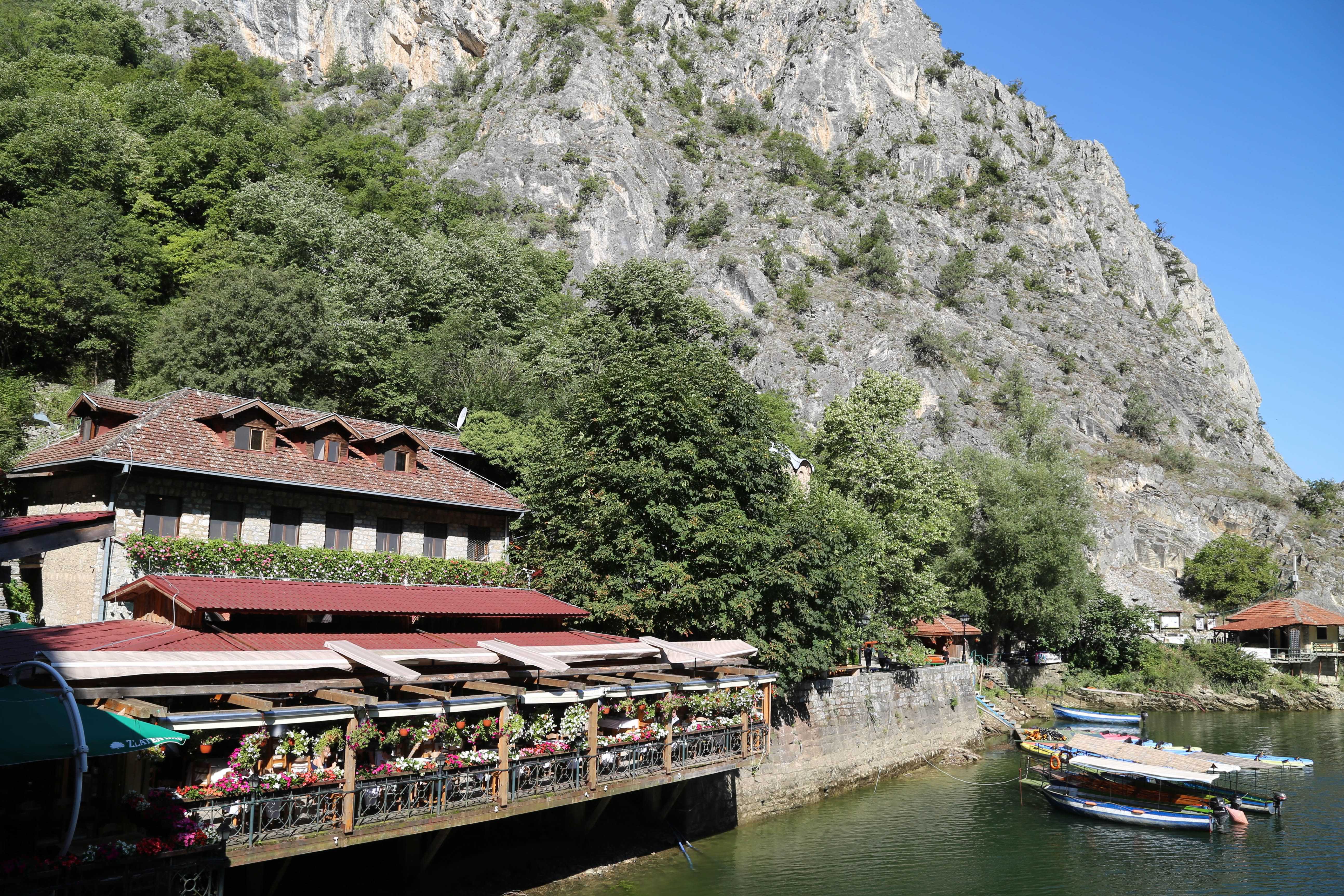 A great way to wind up a visit to Matka Canyon is to have a meal or enjoy a few drinks at the restaurant and bar that is located near the dam.

Given Macedonia’s location (landlocked between the Adriatic and Aegean seas), overall size (slightly larger than the state of Vermont), relatively small population (approximately 1.2 million people), and the location of Matka Canyon, it’s no surprise this natural beauty is not better known to those other than Macedonians. But since fewer than 900,000 tourists visited the entire country in 2016, Matka Canyon is a beautiful, unspoiled place to visit. 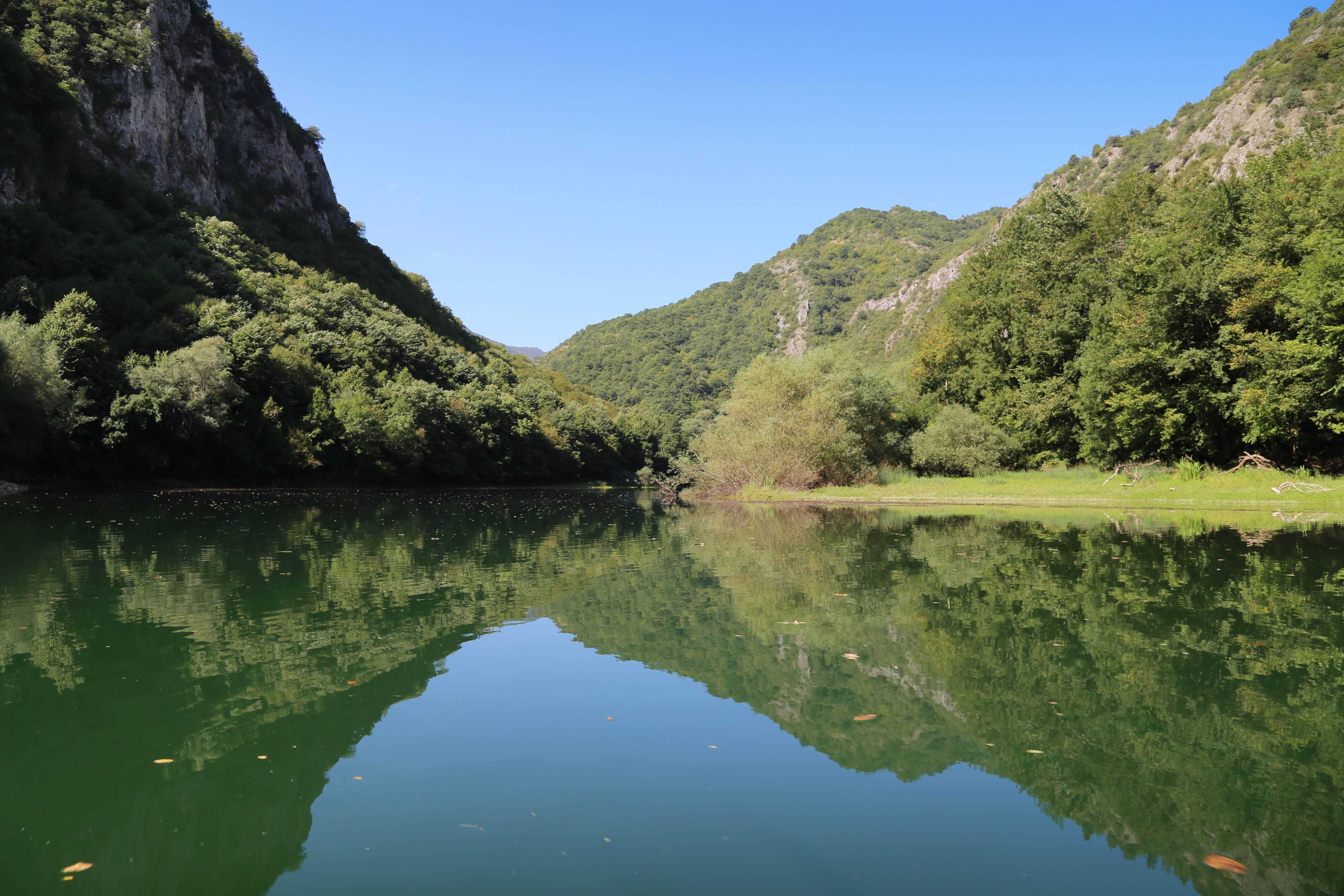 There is a beauty and symmetry to Treska Lake that will leave a lasting impression on all who visit Matka Canyon.

For more information about Macedonia, Matka Lake and Vrelo Cavern, click over to these websites: